Aronian’s creativity, Karjakin’s precision in an advantageous position and full-fledged fights in all the boards were the talking points of the first round at Sinquefield Cup which started today at Saint Louis, USA, the 4th leg of the Grand Chess Tour. Wesley So fell for the time immemorial classic zeitnot tragedy when he blundered on the 40th move and lost to Vachier-Lagrave from a difficult position. Vishy Anand drew his game against Nakamura. Full round one report by Saravanan Venkatachalam.

As the third leg of the Grand Chess Tour started at Saint Louis, US with the Sinquefield Cup, notes of interest are Wesley So (2810) and Caruana (2807) getting nearer to planet Carlsen (2822), and after Paris and Leuven, the first of the two tournaments with classic time control, along with London Classic in Nov – Dec 2017. But however much we try to focus on the first event, there is no denying the fact that the whole world is waiting with bated breath for the re-entry of Garry Kimovich Kasparov in the second event, the Saint Louis Rapid & Blitz from Aug 13 – 19. So, we have a curious situation where the whole of chess public is trying hard to concentrate on the current act well knowing there is anti-climax to follow with change of actors of later on! 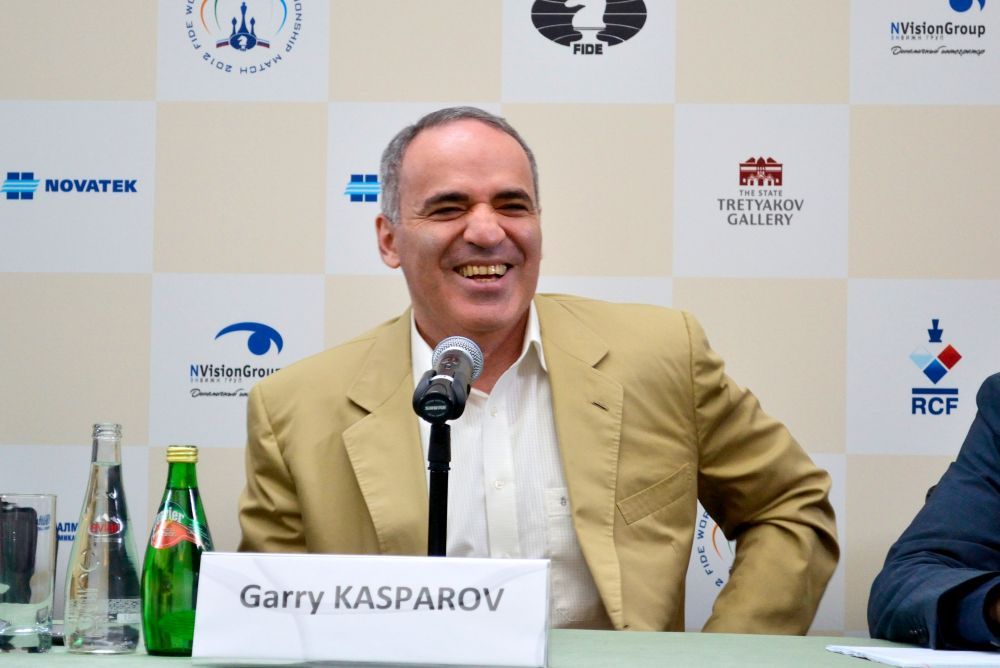 Garry Kasparov at the World Championship 2012, Moscow: the spoiler who makes us wait for the anti-climax rather than the current act [Pic by V.Saravanan]

But of course, we have the world champion Magnus Carlsen and most of the top elite participating here. And if images from the inauguration are any clue, we are definitely going to have a lot of fun at Saint Louis! 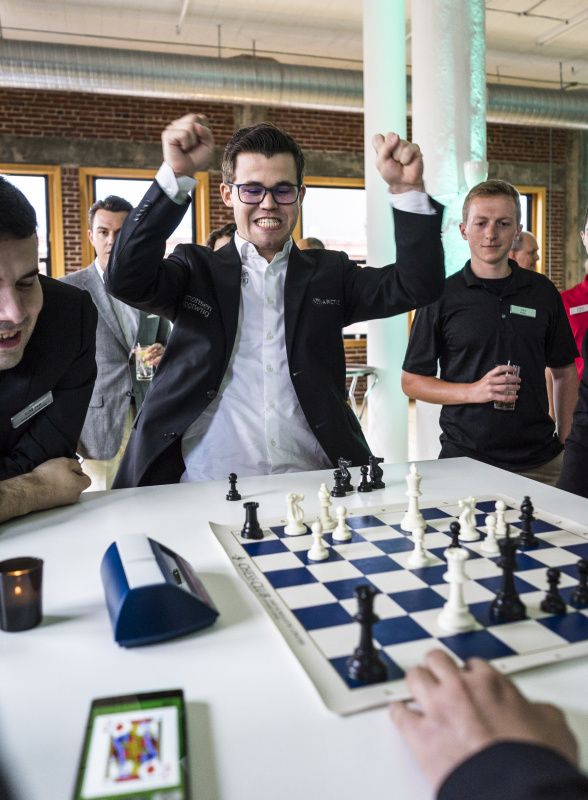 Flanked by Nepomniachtchi, the world champion has his share of fun [Pic by Lennart Ootes]

But we met with a curious piece of troubling information when it was revealed that a game of cards features in the preparation routines of the best of the best too? 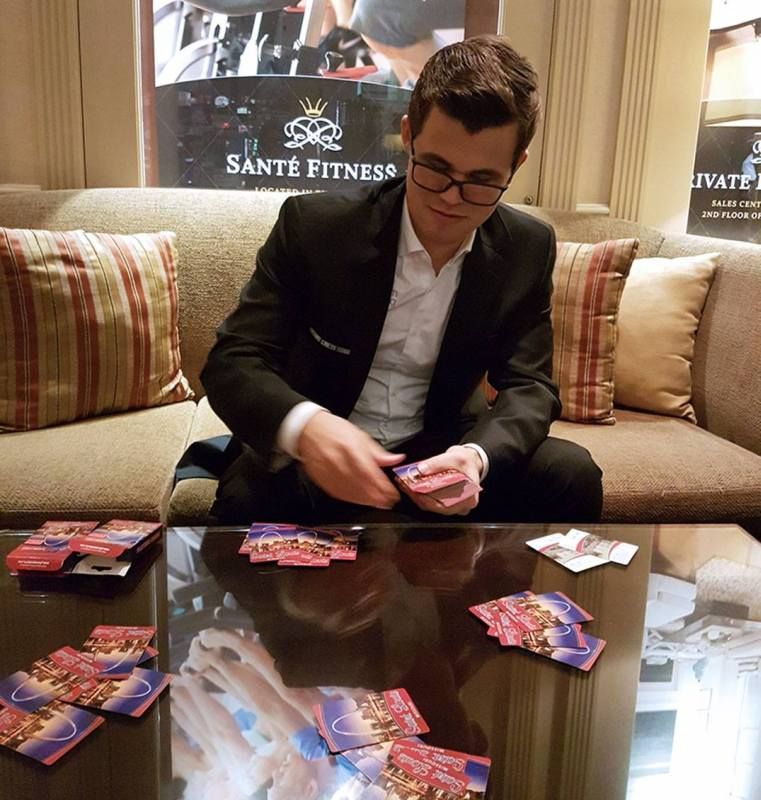 (Pic 3: “Preparing for the Sinquefield Cup with a game of cards after dinner yesterday. Round 1 starts today at 1pm local time”. Really, Magnus? [Pic from Magnus Carlsen’s Facebook page]

Activities kicked off with an elaborate autograph session on the first day the 01st of Aug 2017, and the event itself seems to have generated a lot of fun, indeed. 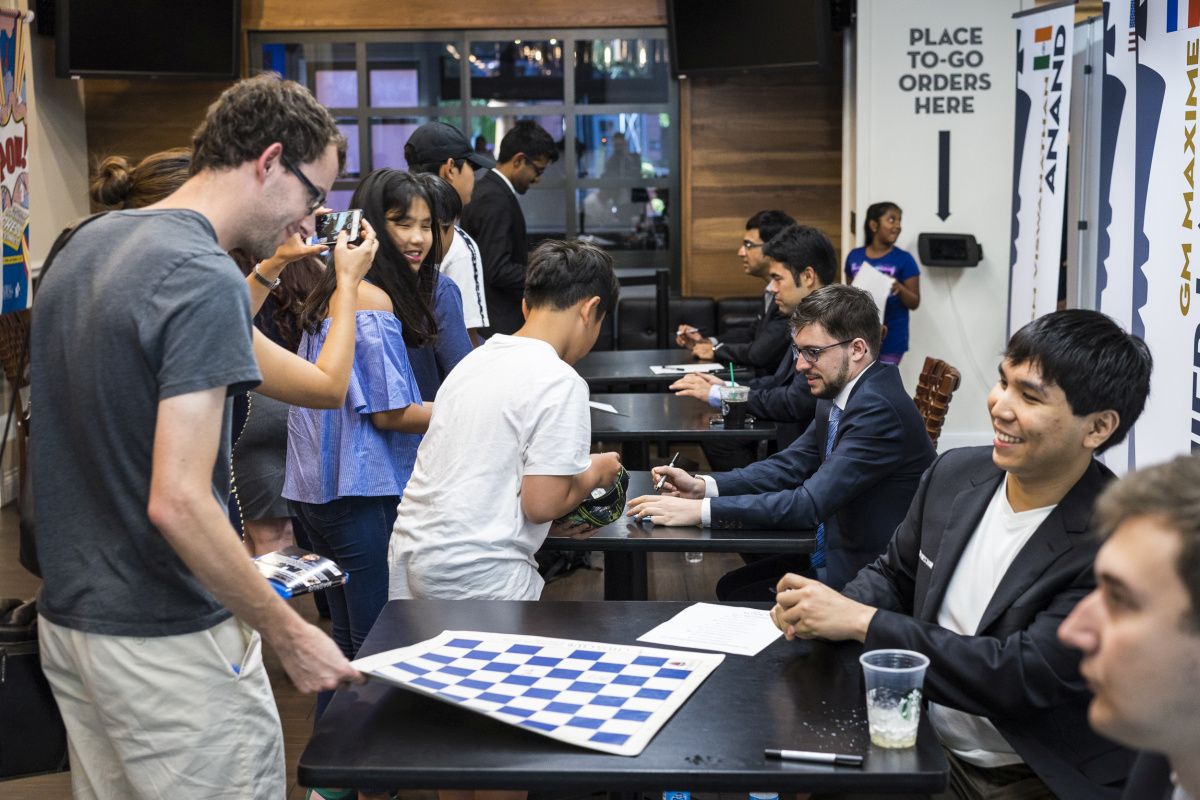 No other event starts with such excitement to the spectators, as Karjakin, So, Vachier-Lagrave, Nakamura and Anand are ready to affix their credentials [Pic by Lennart Ootes]

Not letting up any tempo, the first round started off with full-fledged fights in all the boards on the very first day, prompting Kasparov himself to gush, ‘Bloody day at St.Louis’. And his eyes picked up a particularly delightful maneouvre: 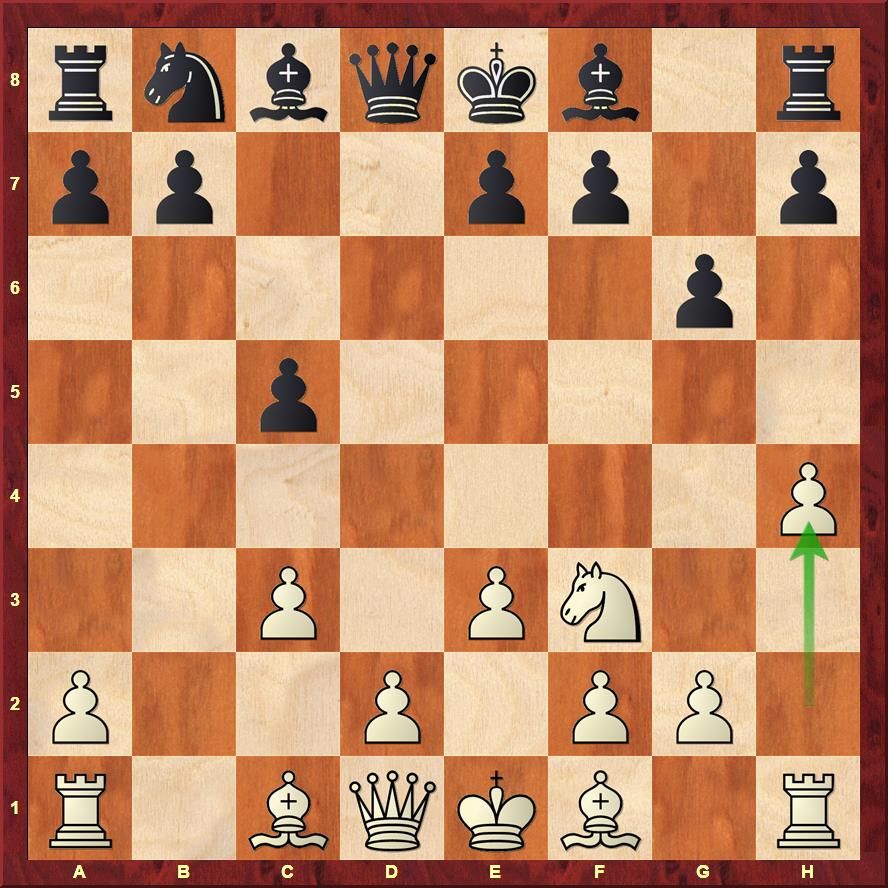 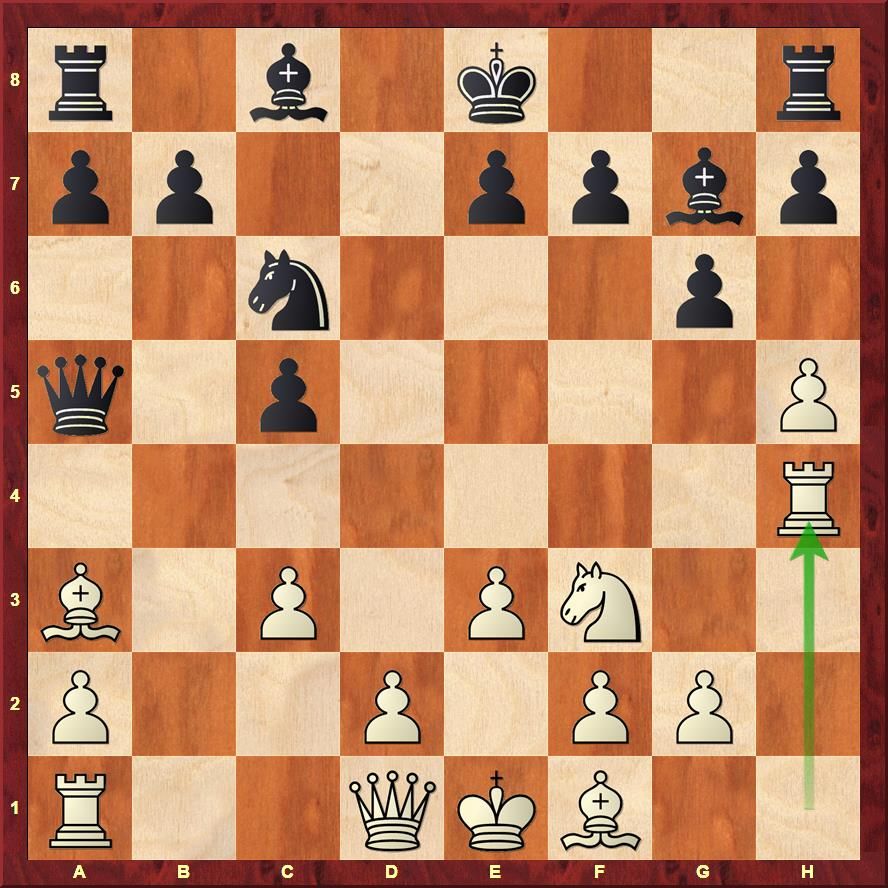 Who needs files, when you have ranks!

Indeed, Aronian’s win looked so smooth that, it left one wondering where exactly did Nepomniachtchi went wrong, especially as he seemed to play quite fast in the opening. 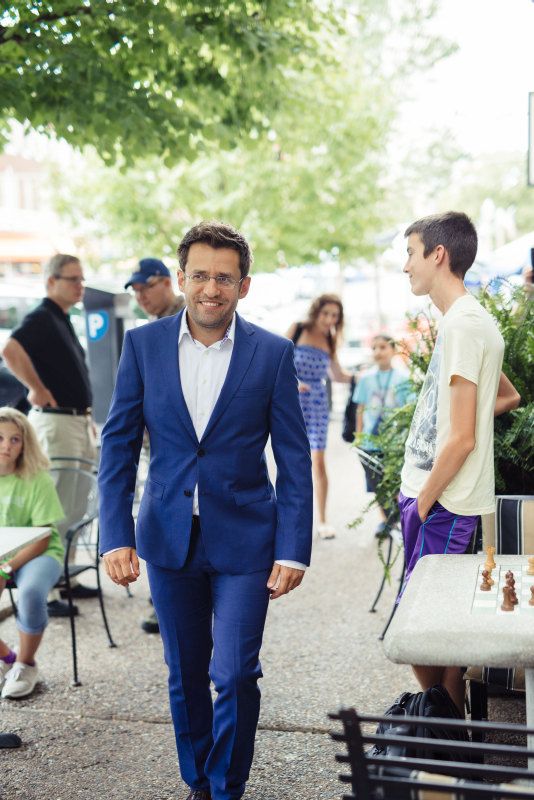 It indeed looks like Aronian got up from the right side of the bed in the morning, and he knew it was going to be a good day at the office! [Pic by Austin Fuller] 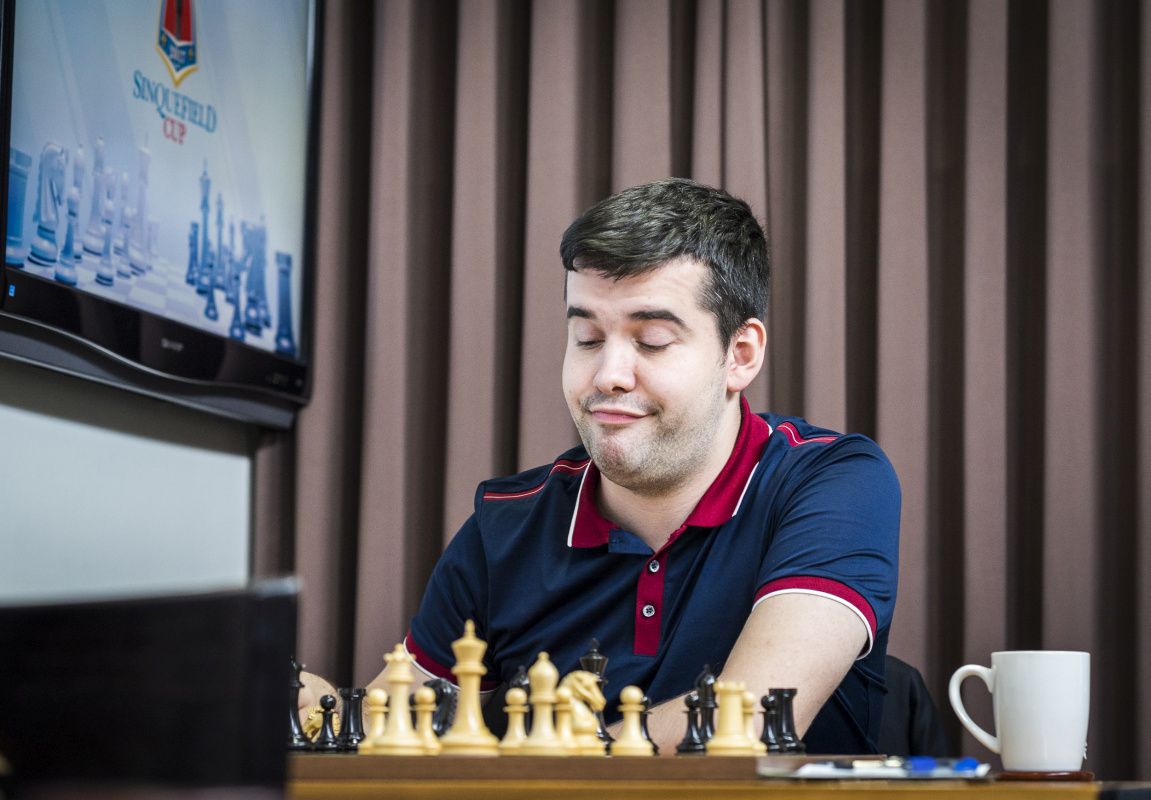 And this curious exchange took place during the post-game interview between Maruice Ashley and Aronian:

Ashley: Tell us, you are playing well lately. Also, the cat’s out of the bag that you are finally engaged to your longtime girlfriend. I hope this is not news to you! (Aronian laughs) What’s causing this resurgence of Levon Aronian?

Aronian: I think I always play well! It’s just that, I used to play well and spoil (the games), now I convert some of it! I think I can do better, let’s see… Karjakin – Svidler was a very complicated affair, where white enjoyed keeping all the pawns from a-file to e-file on the 4th rank just for a move in the transition from opening to middlegame. A key move to easily overlook could be Karjakin’s 22.Ra3! which would ultimately hold Svidler’s threats on the kingside and nurse his pawn phalanx on the queenside smoothly. 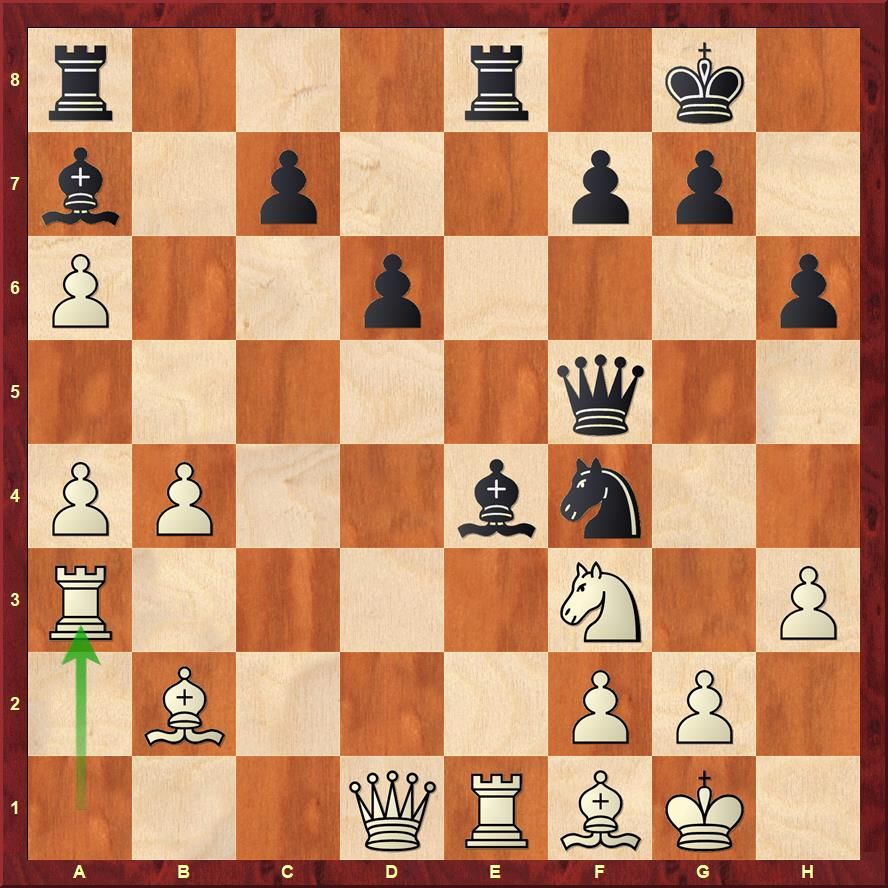 And later on, Karjakin clinched the issue with the impressive Ra3-g3-g4xe4 maneuvre, sacrificing the exchange and sealing the game in his favour. 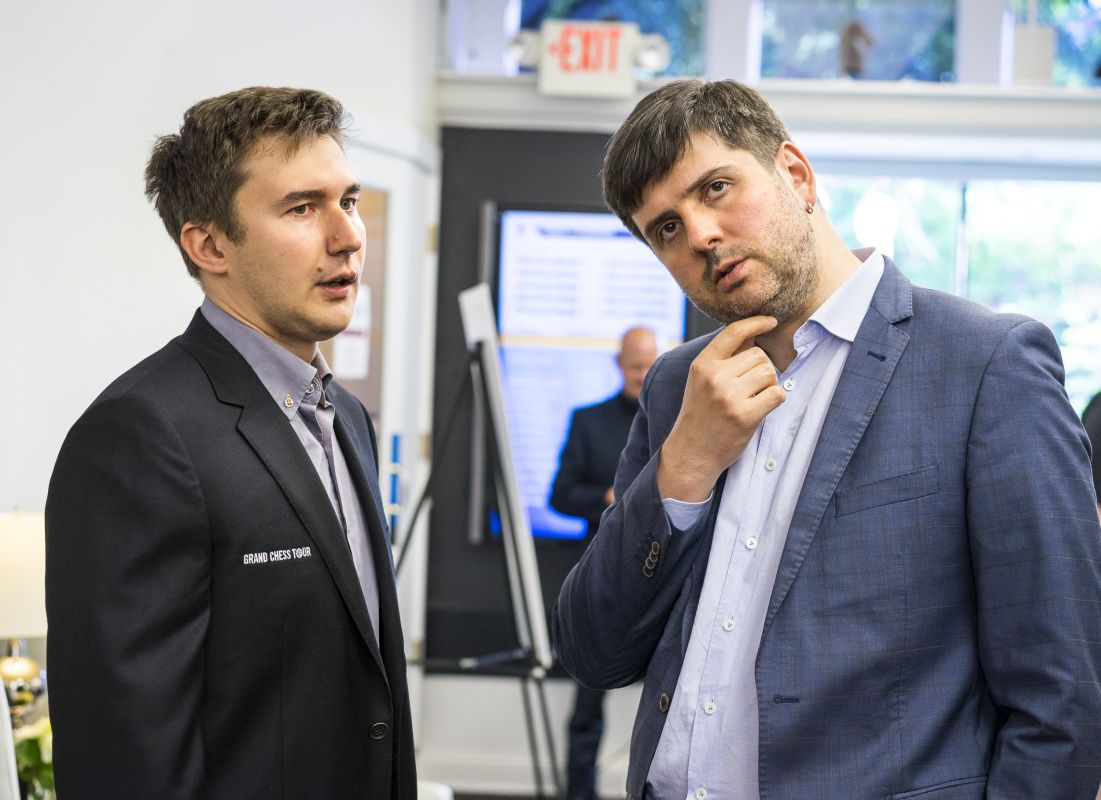 Anand – Nakamura was a comparatively quieter affair, where one got the impression that black could have continued playing in the final position. 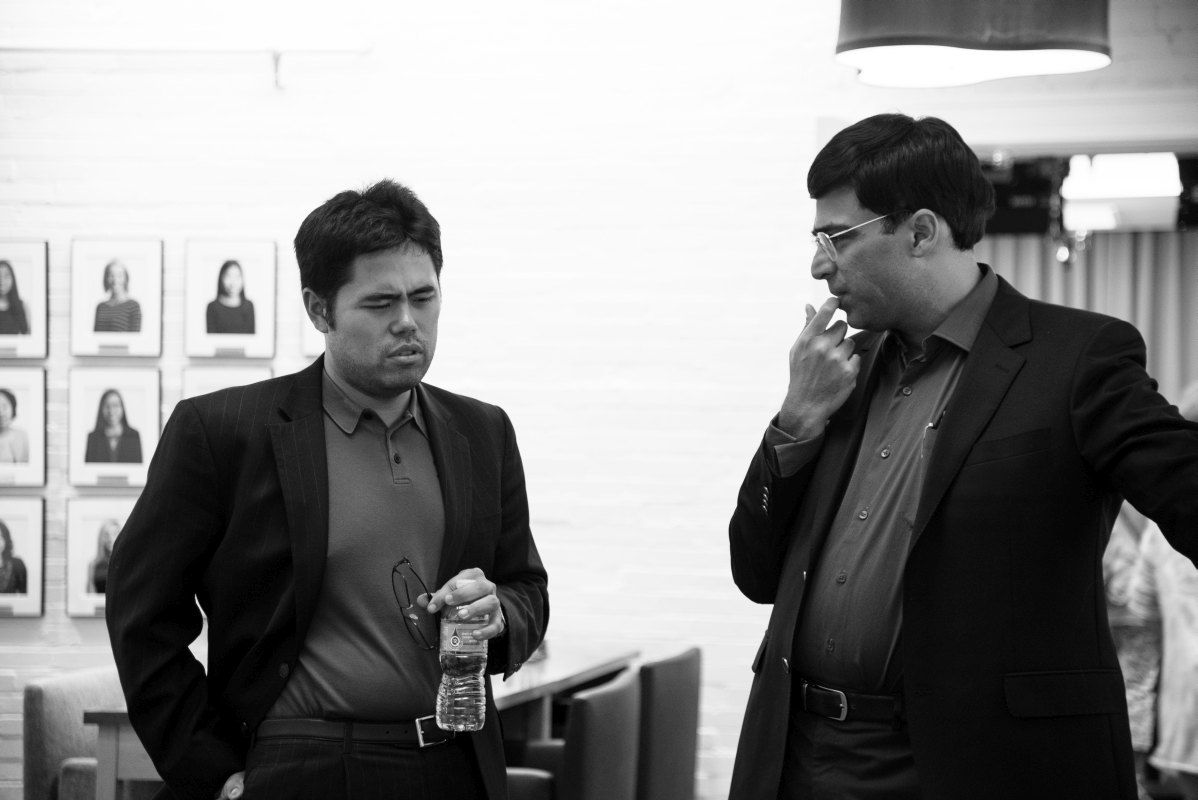 Wesley So fell for the time immemorial classic zeitnot tragedy when he blundered on the 40th move and lost to Vachier-Lagrave from a difficult position. 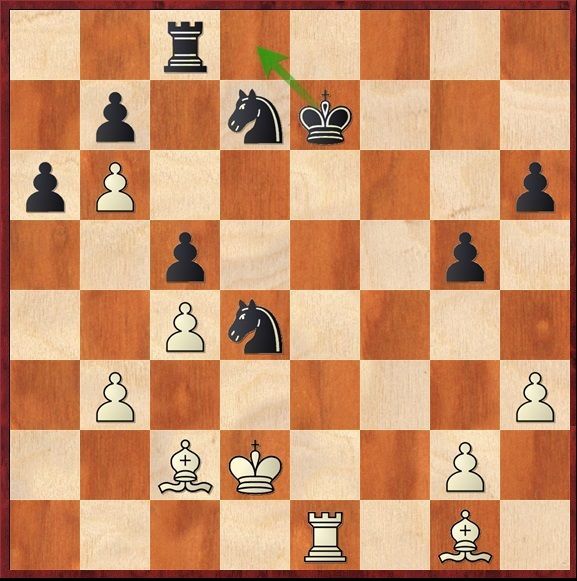 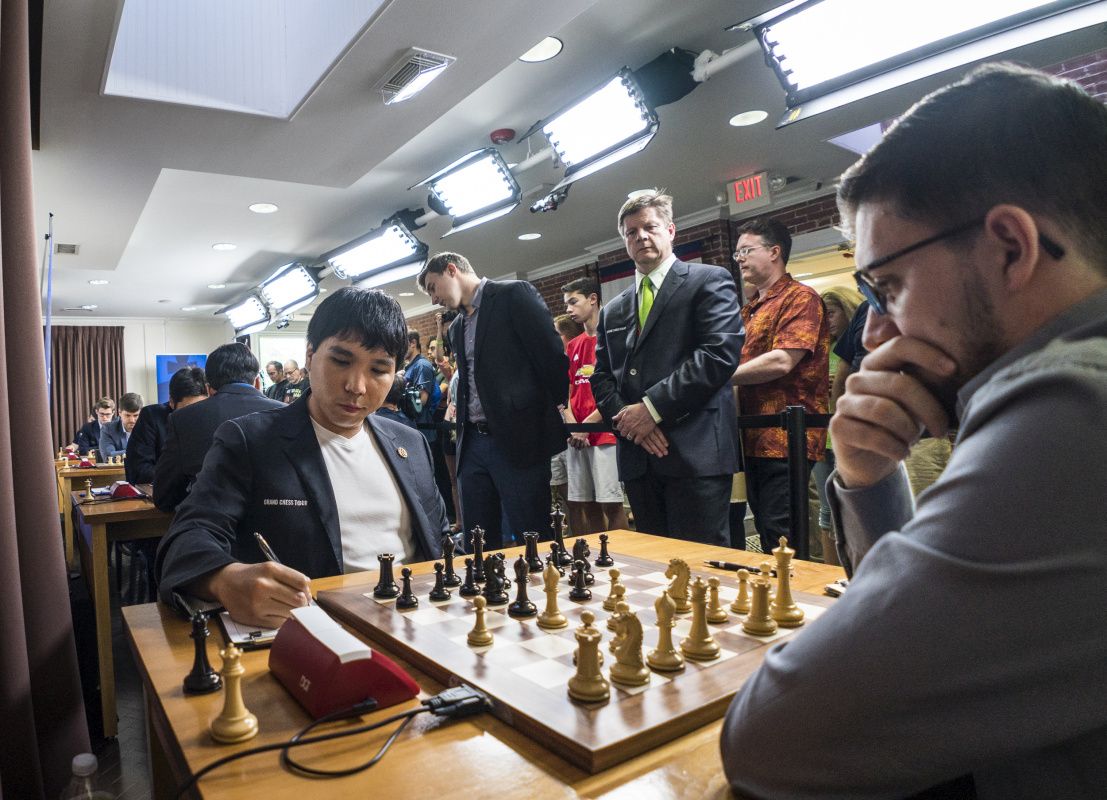 Finally, the heavyweight clash between Caruana and Carlsen was a perpetually balanced affair, leaving one wondering where Caruana was going with his preparation, as he didn’t seem to get much out of it. The most exciting detail of the game came much later, when Carlsen unleashed 30…b3 & 31…d3! to secure the draw 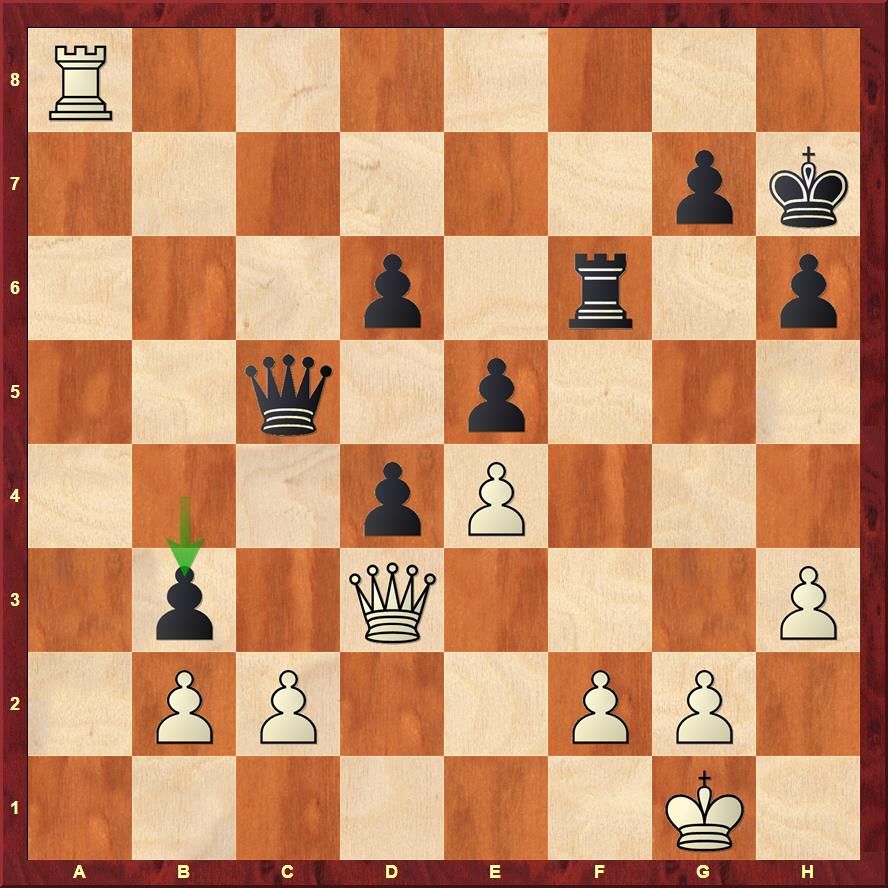 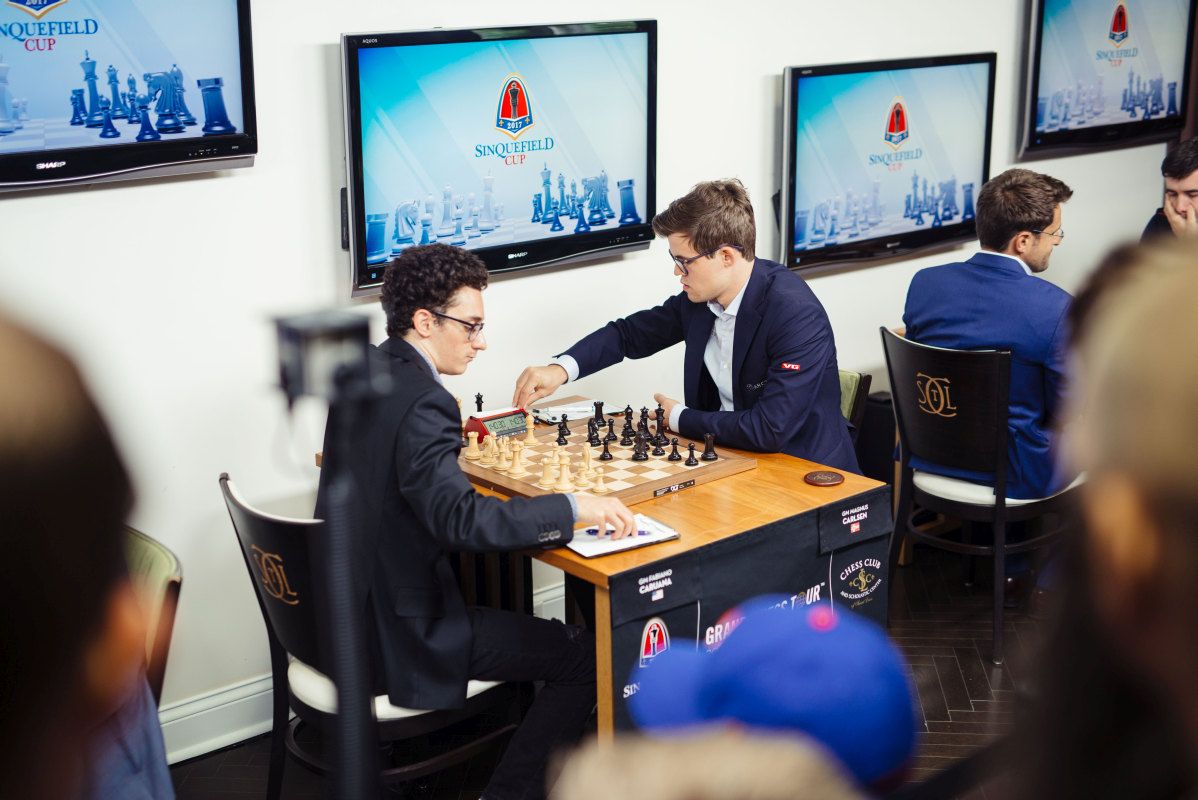