Sharjah Masters tournament attracted a fair number of strong grandmasters and talented youngsters from across the world, but the majority were from India. For most, it was a chance to play two successive tournaments (this event was followed by Dubai Open that ends today). Wang Hao of China was the winner, but two Indians—Adhiban and Sethuraman—took a share of the first prize pie.

All photos by Maria Emelianova

Video report of round nine by Daniel King

The one game between actual leaders was more a formality, and Wang Hao and Yuriy Kryvoruchko only made a half-hearted attempt, more seeing whether either was feeling frisky or not, before shaking hands after 28 moves in a virtually symmetrical position.

This left them both with 7.0/9, but also meant that should either Adhiban or Kravtsiv win their games, they might take sole lead themselves. That said, they were also playing black and both faced 2700 opponents, so the odds were in favor of this not happening. 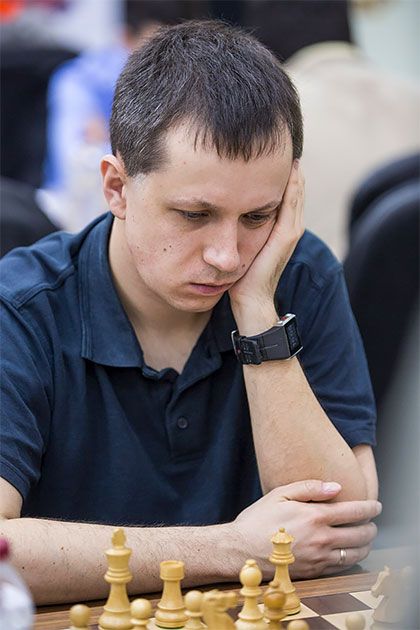 Top seed Wojtaszek got an edge and was certainly playing for a win since with 6.0/8 he absolutely needed the full point to have a chance for a place on the podium. This was good news for Adhiban, playing black since it meant the game would be a live one with chances of his own. With 6.5/8, a draw would put him on parity with the leaders, while a win could mean sole first. The Indian ended up worse for a good part of the game, so when he drew it, it was not an unhappy result for him. 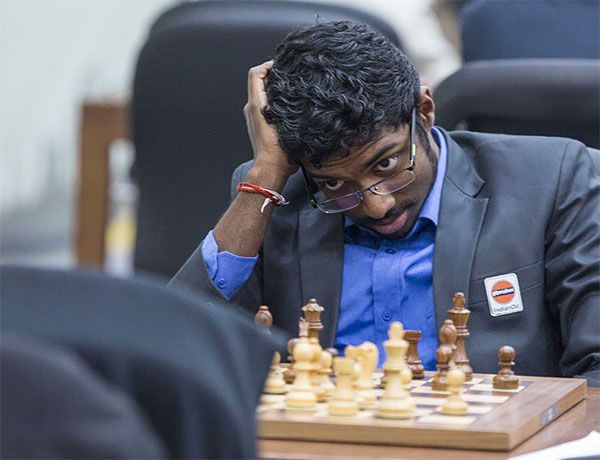 Baskaran Adhiban managed to take second in the end

Finally came Naiditsch with 6.0/8 and Kravtsiv with 6.5/8, in a similar strategical situation as Wojtaszek and Adhiban. The Ukrainian played an excellent game and after a long battle reached a completely won opposite-colored bishop ending. The rolling phalanx of pawns should have been a no-brainer, but instead, the nerves and prospect of sole gold (by then he knew the results of his rival co-leaders) caused him to crack, and let Naiditsch escape with a nice finesse. 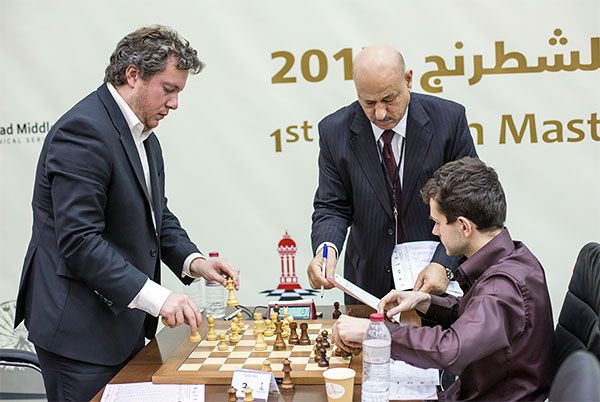 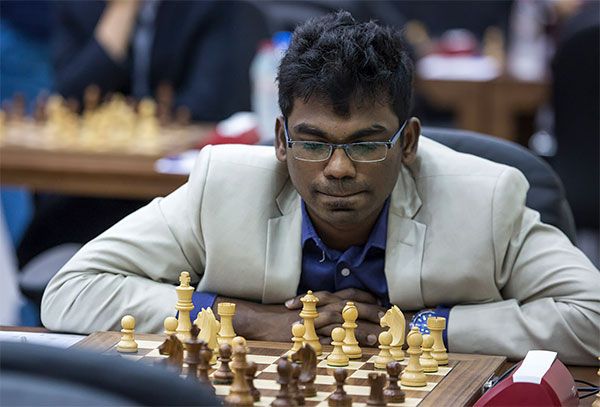 S.P. Sethuraman was another Indian to take a piece from the podium pie as he won his last game against Akopian, which he presents below

Coming in fifth place was Indian player Sethuraman, who knew that the only way to get a decent prize was to win his game, and win it he did, against Vladimir Akopian. Here he analyses the final phase with Daniel King.

The final player to join the group on 7.0/9 was Salem Saleh, the local hero. Salem had had a dodgy start with only 2.0/4 in the start, but gained steam quickly and finished with an immaculate 5.0/5 beating Ukrainian Areschenko in the final round. 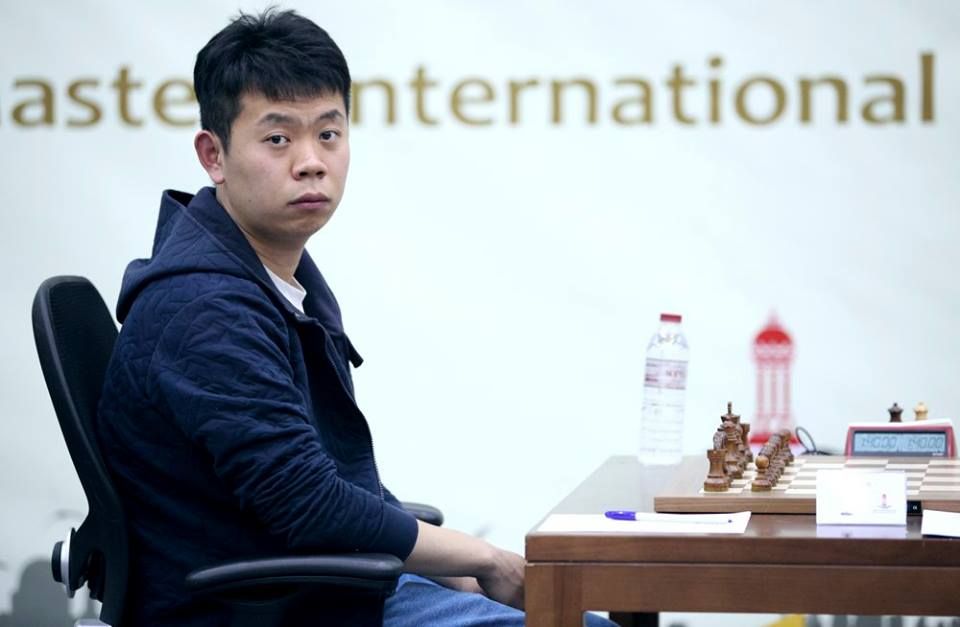 In the end, Wang Hao’s superb campaign also gave him the best tiebreak, and he took first, while Adhiban came in second, and Kravtsiv took third. 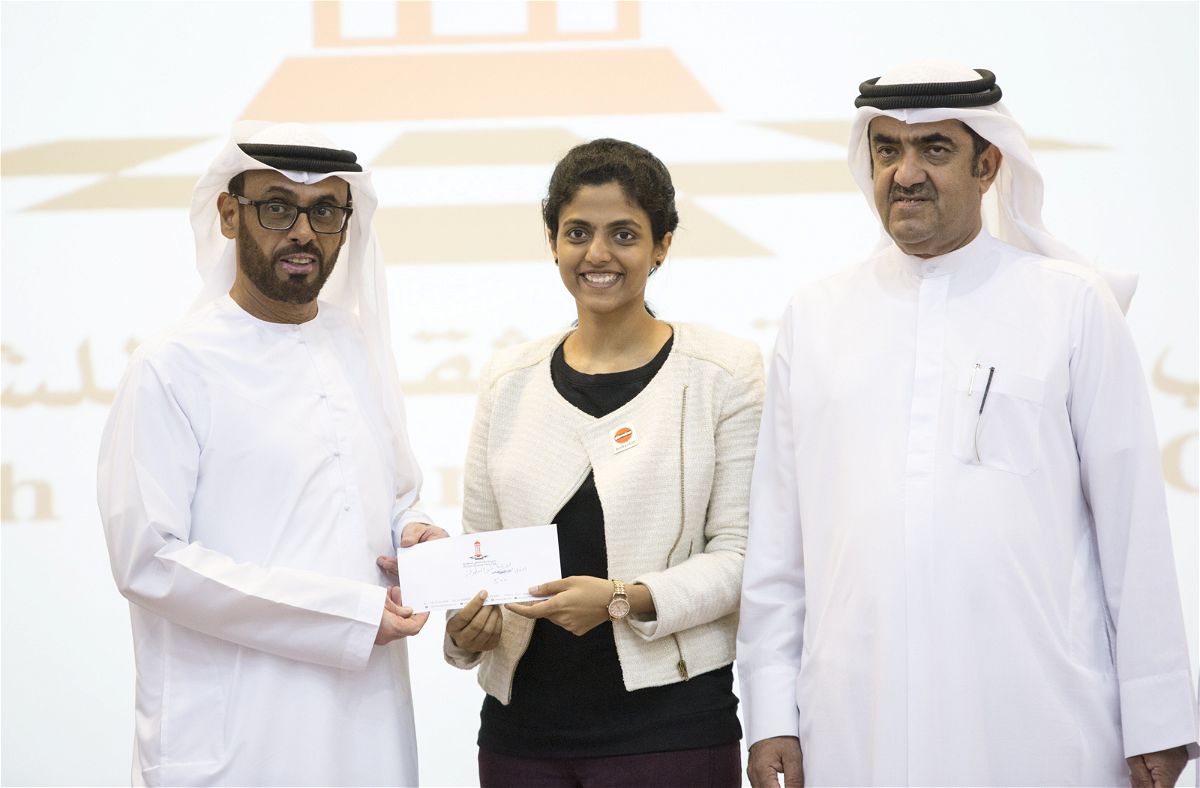 The top female prize went to Harika Dronavalli, easily the highest rated in the event. In the final round, she drew Mikhaylo Oleksiyenko, rated 2643 and finished with 6.0/9 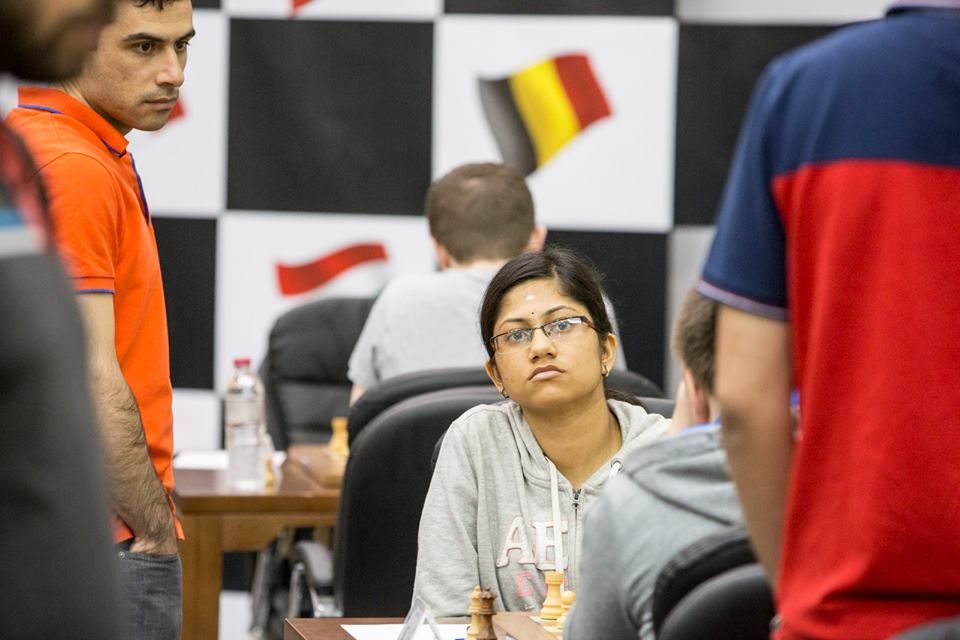 A special mention to WFM Srija Seshadri, rated 2166, who scored 5.5/9 with a 2450+ performance and an IM norm!determined to win with white. Win he did in very short time, and he presents his miniature here. 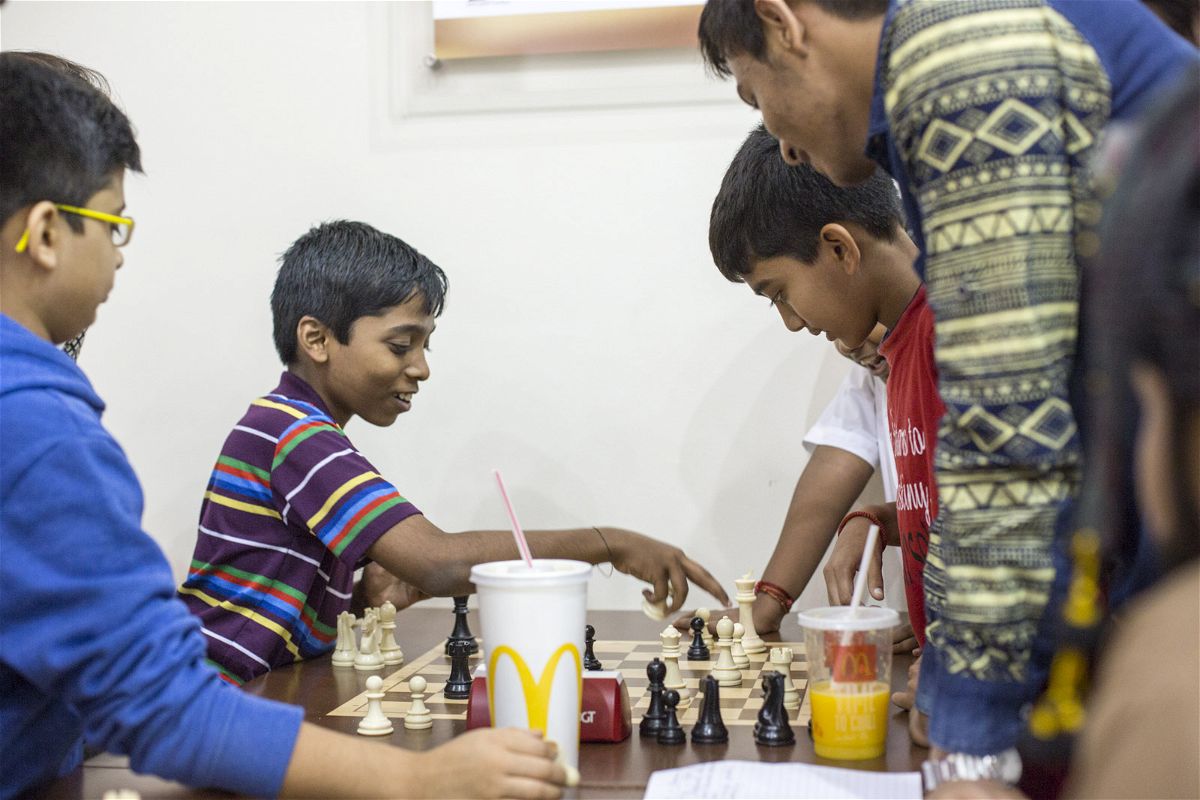 After the round, kids gather around to analyze and play. In Round 06, IM Praggnanandhaa R. had a scare against talented Nagpur boy Sankalp Gupta (2265) but he managed to hold a draw. He finished with wins over two 2200s to secure 6.0/9. 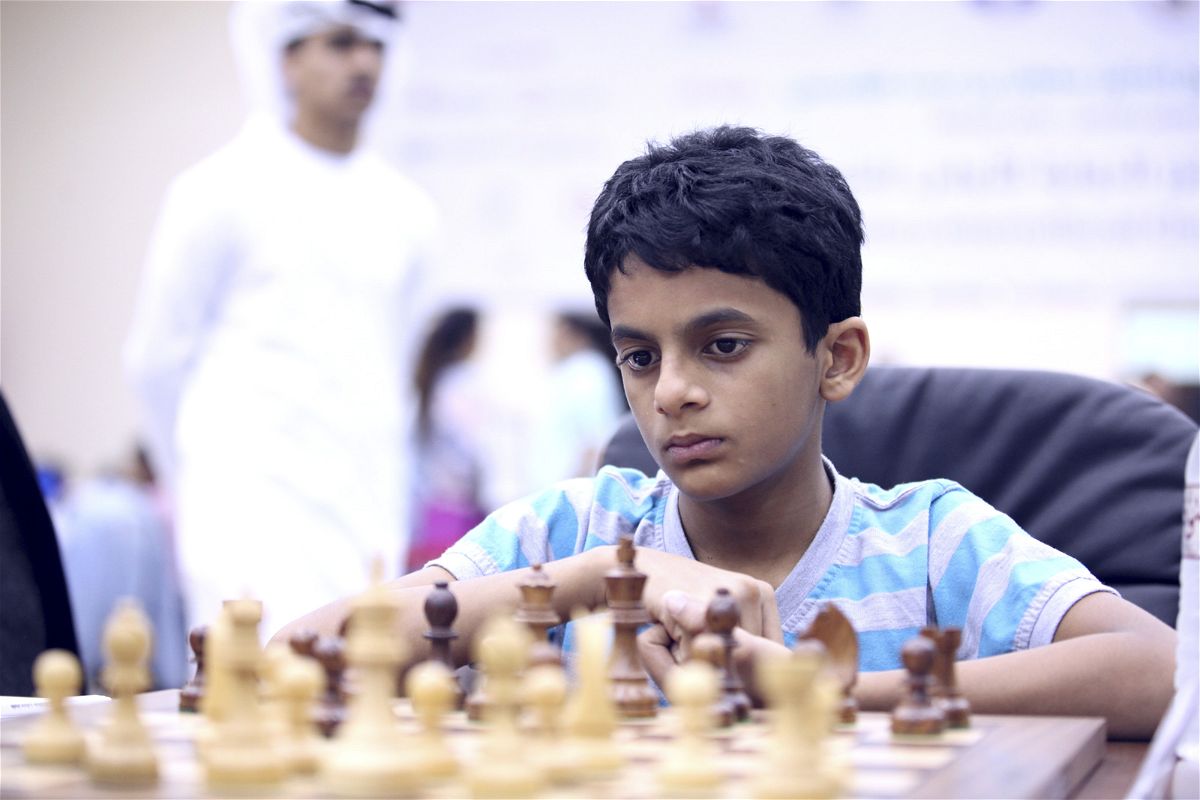 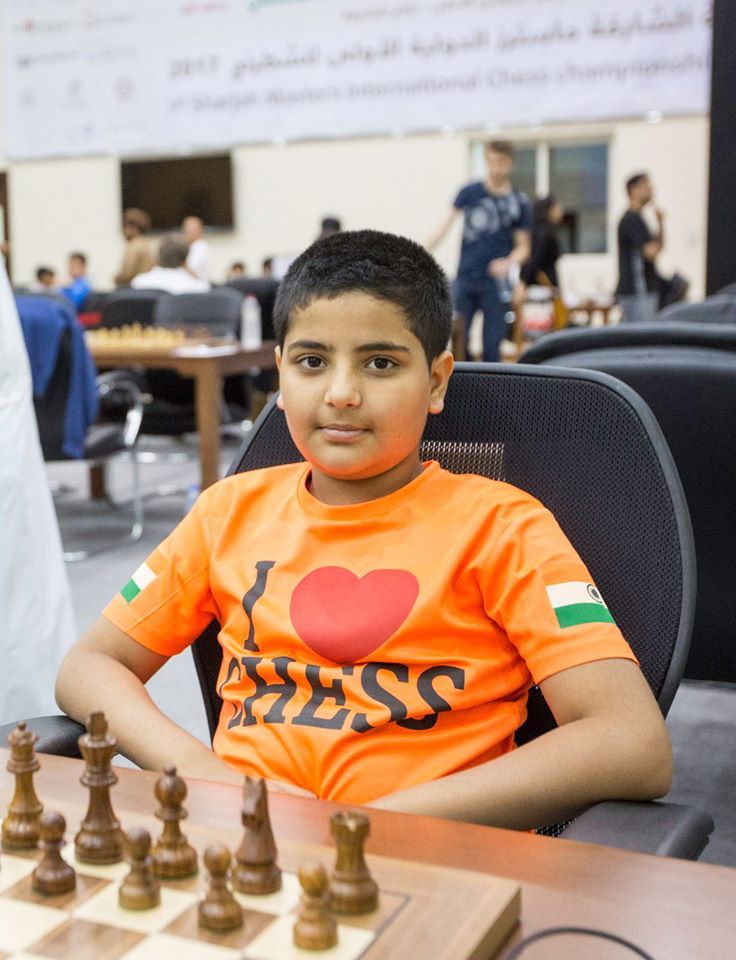 FM Raunak Sadhwani beat one IM and drew two others and was also 5.0/9. 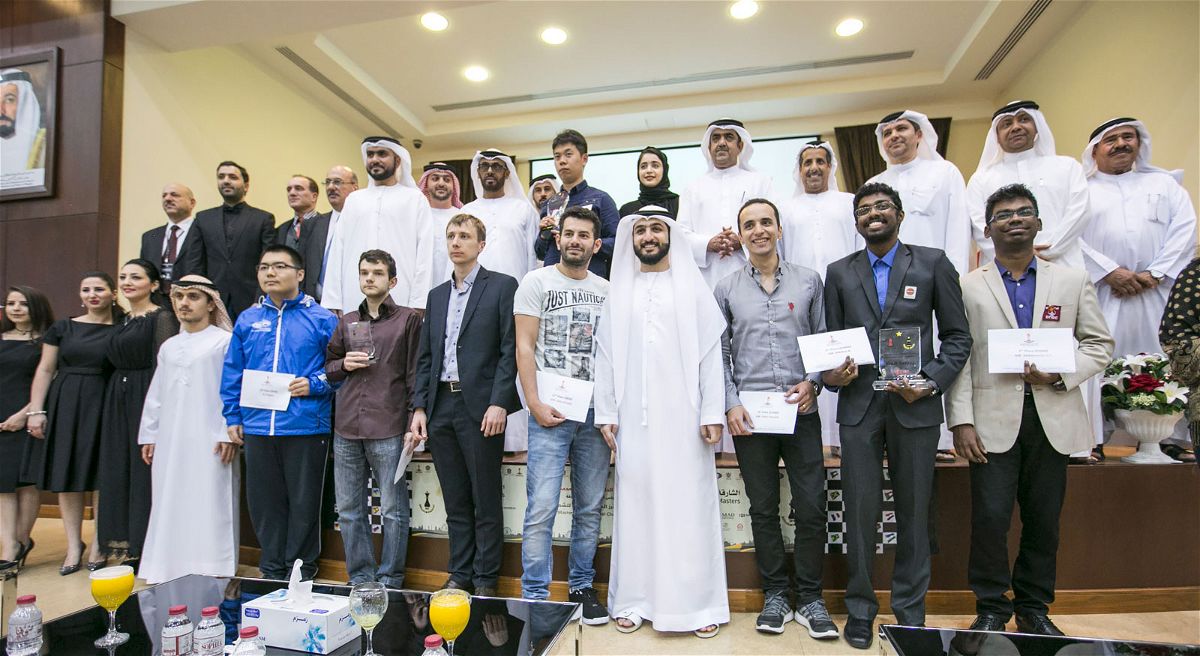