Sethu on his match with Hari

After an intense match against Harikrishna we contacted Sethuraman through Skype and sent him a few questions to be answered for our readers. The diligent man that he is, Sethuraman immediately sent us all his answers and explained about how he was able to beat one of the strongest chess players in the world.

Sethuraman speaks about his match with Harikrishna.

After the match with Harikrishna ended in 1.5-0.5 favour of Sethuraman, we sent a few questions to the 22-year-old lad and this is what he had to say: 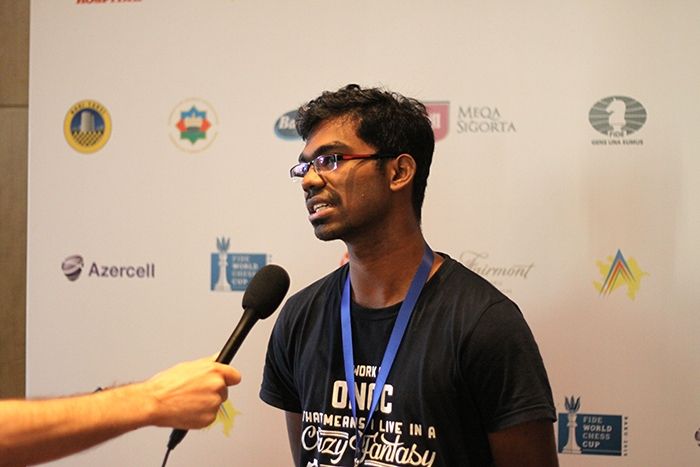 Sagar: How does it feel to enter in the third round of the World Cup?

Sethu: Its feels great to enter the third round as well as to play against the top most players of the world. Before the tournament, I had no expectations. I just wanted to make use of the opportunity to prove myself to my best of my abilities and to fight in every game.

SS: Tell us about your second round match against Harikrishna.

Sethu: The match was pretty interesting. In the first game, it was an Italian Opening and we got a very interesting complex position. I was slightly worse at some point and was low on time but defended well in the pawn down endgame. After 70 moves, it was a well-fought draw. Preparing for the second game, I noticed that Harikrishna's opening repertoire was very solid. I wanted to try something with the white pieces since I was not sure about my rapid play. I went for the Berlin Endgame but didn't handle it well and slid into a slightly worse position. But even here I had some tricky ideas with knight jumps here and there. At some point, I even got better and in mutual time trouble Hari missed some moves and I won the game.

SS: You will face the winner of Mamedyarov and Hou Yifan. Currently, they are at 1-1 and will play in the tie-breaks tomorrow. Whom do you prefer facing?

Sethu: Both of them are strong players. I am eagerly looking forward to my third match.

SS: How does it feel to be the only Indian left in the competition?

Sethu: It would have been good if two or three of them were still playing in the third round. But as I said before it was unfortunate that Harikrishna and I were paired against each other in the second round. Only one of us could progress.

SS: All the best Sethu. We hope that you keep moving ahead.

Sethu: Thanks for your wishes!