by Priyadarshan Banjan - 06/01/2016
The 53rd edition of India’s National Premier Championship was held from 15 November 2015 to 28 November 2015 at Thiruvarur, Tamil Nadu. The 13 round all-play-all with a rating average of 2501 was the strongest Indian tournament of the year, and the tournament was won by sixteen-year-old grandmaster Murali Karthikeyan. In this first part of our illustrated report with GM analysis, you will see how the tournament built up in the first half and how many of the players fared, with post-tournament comments, self-analysis and observations by the players themselves!

Chess has metamorphosed into a young man’s game. If solidity is the key to winning tournaments, some players like Murali Karthikeyan believe otherwise. Of course, he feels terrible when he loses. Any grandmaster of sixteen would. He is overjoyed when he wins – he called up his parents, who then made a six-hour bus journey on the night before the tournament ended to witness their son’s moment of glory. All he needed was a draw to become India’s National Premier Champion.

Murali Karthikeyan qualified to play in the National Premier by picking up his spot at the National Challenger’s Championship held at Nagpur, India in August. His performance in the World Juniors was lackluster, to put it mildly. When the National Premier began, he was already staring at a humongous deficit, as his aggregate score after two rounds read 0/2. Understandably, Karthikeyan would just retreat to the silence of his hotel room after the rounds. The lad preferred to stay alone, rather than be with his parents, so he could focus better. His tournament situation painted a bleak mask on his face.

It was as if he were forced to box with Muhammad Ali with one hand tied behind his back, and GM M. Karthikeyan (2498) wasn’t happy
GM S.P. Sethuraman (2651)

The tournament was a fourteen player round robin, and there is much that could be written about the players themselves, their moments of joy and sorrow. Much could be said about Sethuraman’s memorable comeback in the second half of the tournament or Vidit Gujrathi’s methodical assault at the national title.

Vidit was eager to stamp his mark in the history of India’s National Championships, and all throughout the tourney, he displayed in-depth preparation, which won him many a game. In the second round, he entered a variation that his opponent has been playing for more than a decade and managed to surprise him. A surprised player is half beaten.

Thus, Vidit was off to a stellar start with two quick victories, but he was not alone…

In the second round, P. Karthikeyan took down his namesake GM M. Karthikeyan, who had lost the first game as well and now, was left marooned on an island of 0/2, along with GM Abhijit Kunte and GM Venkatesh, whom he was playing in the third round.

In this battle of the zero pointers, M. Karthikeyan was able to score his first victory of the tournament. He was on the scoreboard, finally.
GM Neelotpal Das (2475)

Then, in the fourth round against GM Neelotpal Das, he played a game that was simple by its nature, yet elegant in its execution. 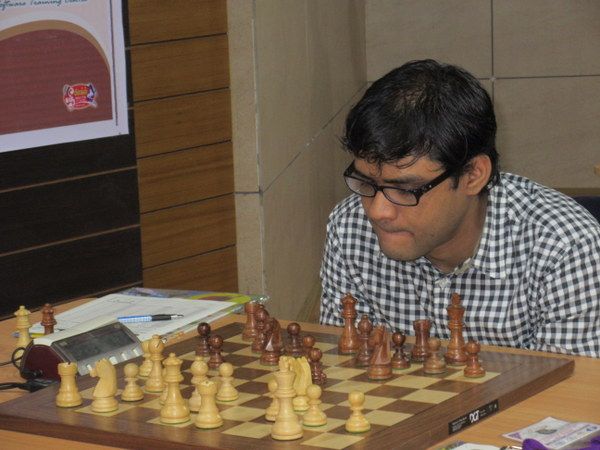 "Before the event my goal was to play fighting and interesting games and I think I did okay in that part. But performance is an entirely different thing than the quality of games. I collapsed at the end after the 11th round and didn't get a chance to recover. In a few games, I had huge advantages (like against Deep Sengupta, Rathnakaran, Abhijeet Kunte) which I couldn't convert into wins."

When  asked about what he learnt from this tournament, Neelotpal insightfully added: "One should be able to control emotions in the game of chess since psychology plays a decisive role in crucial moments. I was totally engrossed only in the game and probably neglected other important factors like the psychological aspects, time pressure, etc."

Meanwhile, M. Karthikeyan scored another victory, this time over GM Deep Sengupta (2589)
After punching three straight victories, he settled for a draw with GM M. Shyamsundar (2481) and…
…FM Praneeth Surya (2413), the last seed, who has gained more than 200 points in a space of five tournaments in 2015.

Although Vidit wiped him out in the first round, Praneeth played some excellent chess throughout the tournament. What he lacked in opening preparation and experience, he made up with excellent calculations and by maintaining a calm head under time-pressure. He downed a number of grandmasters, but the biggest catch was undoubtedly the defending champion, who out rated him by 234 points.

"I am very happy with my performance. I feel I played good chess throughout the tournament. In the last two rounds, due to health problems, I couldn't perform at my best and lost both the crucial games. Only that is a bit saddening. Still, I feel I performed well against the better players. Before the event, I said I wanted to come in top three, but I also mentioned, to bring the best out of me, I keep such targets. In the end, I finished seventh which is nice."

"In the first few games everything went wrong; so in the second half, I changed my target to finish in the top ten instead and managed well," Rathnakaran says. "Nevertheless, I learnt the importance of high-level preparation, and I will work on this."

His swashbuckling style of play has won him a legion of admirers across the nation.
Anand is a sporting and cultural icon in this part of India
Hotel Kasi’s Inn, Thiruvarur, Tamil Nadu in India was the host of the tournament

Special thanks to FM Nihal Sarin for analyzing the games in this report.

All photos by Priyadarshan Banjan