States in the North-East region of India famous for their scenic beauty and vibrant flora and fauna. However, chess tournaments in this region are a rare occurrence. In fact, only about a dozen tournaments were organised in the last three years in all of the eight states combined! Therefore, a group of chess lovers from the region decided to satiate their craving for a chess tournament by organising one themselves! The tournament was a major success and attracted more than 250 participants that included 6 titled players. At its conclusion, the event saw IM Rahul Sangma lift the winner's trophy with a score of 7.5/9. Angom Nongsha, a participant of the tournament sends us a comprehensive report.

The Guwahati International Open Fide Rated Tournament was held in the riverine city of Guwahati from 12th to 16th July 2017. What was special about this event was that it was organized by many chess aficionados who were tired of the lack of chess tournaments in the North Eastern part of the country. In the past three years, only about a dozen of tournaments were organized in eight north eastern states together! These earnest efforts of some true lovers of the game were fittingly rewarded as the tournament turned out to be a major success. The event attracted participation from 17 out of the 29 Indian states. A whopping 258 players participated in the event of whom 157 were rated players. Moreover, the event included seven titled players: four International Masters, two FIDE Masters and one Candidate Master. 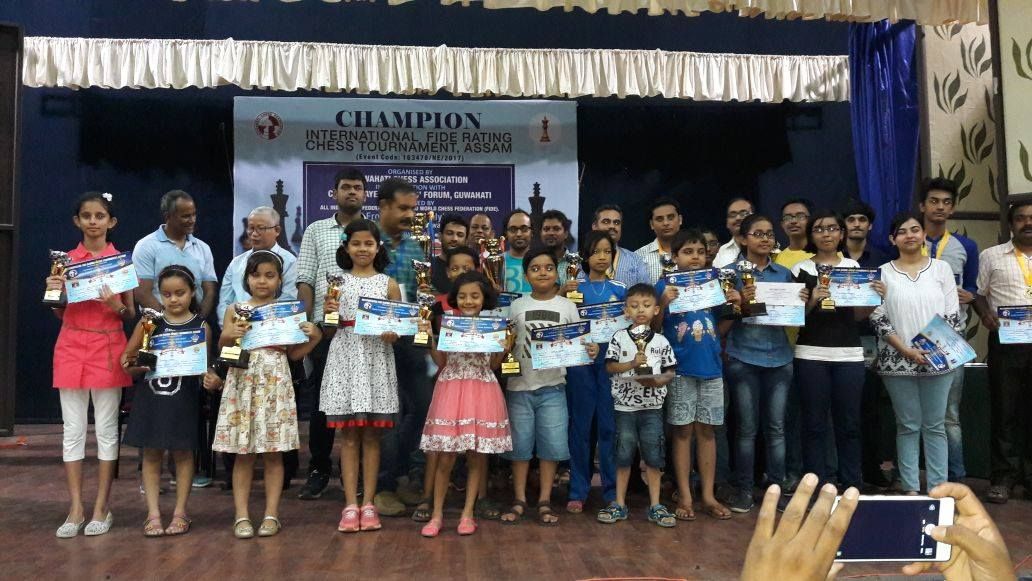 With such a strong field of participants, the tournament was bound to be a tough one. After nine vigorous rounds played over a span of five days, the event witnessed as many as five players tie for the first place with a score of 7.5/9! After the tiebreaks were applied, it was IM Rahul Sangma who took home the winner’s purse of ₹ 50,000. As soon as the final standings were put up, the author of these lines rushed to interview Rahul Sangma. 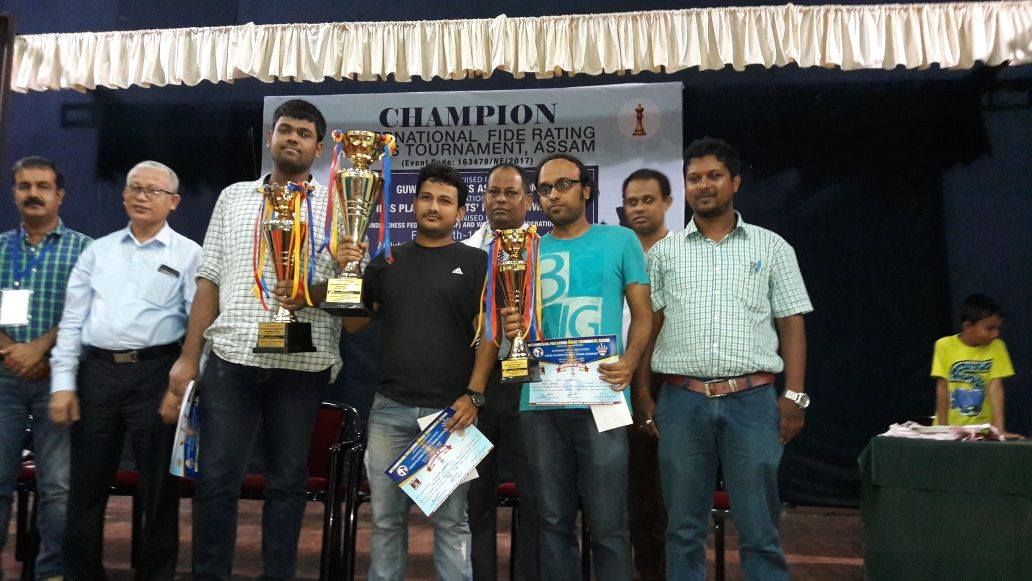 Top three winners at the event. 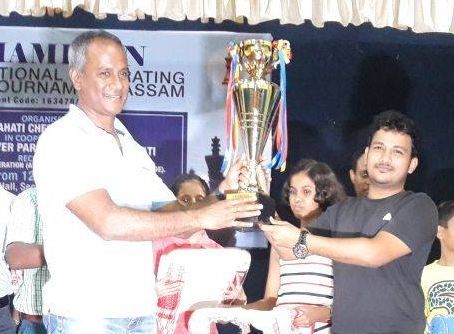 Below is a game annotated by the tournament winner Rahul Sangma. It's his last round win against Rajkumar Apollosana.

Angom Nongsha (AN):  Hi Rahul! First of all, heartiest congratulations on winning this tournament.

IM Rahul Sangma (RS): Thank you so much (Smiles).

AN: So what was it that helped you win this tournament? Did you have any special preparation?

RS: Actually, my first purpose of coming to this place was to visit Kamakhya Temple. My mother has also come with me. Since my home is in Bihar, it’s a bit near compared to Gujarat. So the main reason was to see places. Regarding the tournament, yes, I wanted to do better as when I first saw the list, not many good players had registered. But afterwards, 6 titled players and lot of other good players had enrolled. So I thought to myself I’ll play my best game without caring much about the result.

AN: And what do you think is the biggest strength of a chess player?

RS: I think the biggest strengths of a chess player are passion and a never say die attitude. When you are truly passionate you give 100% to any position – even if it’s a position you are uncomfortable with. And once you are willing to give your 100% you can cope with difficulties more easily.

AN: Could you share with us what your daily schedule is? How much time do you dedicate to practice and preparation?

RS: Honestly, before I became an International Master, I was working very hard on chess. I used to practice for nearly 8 to 9 hours daily. But once I became an IM, I got a job in the Railways and I started doing other things like coaching. So right now, I am working only around 3 to 4 hours a day but I feel I should start working more.

AN: And how much importance do you give to physical fitness?

RS: I give it a lot of importance. I exercise daily and I also do yoga and jogging.

AN: You have already crossed the 2400 mark in the past and now again you are marching towards it. What you do think is the difference between an IM and a GM and how do you intend to bridge this gap of 100 rating points?

RS: Okay actually my peak live rating was 2427 so I know I have the strength of 2400. And the main difference between an IM and a GM is that the latter gives more time and is very well prepared. Also, I think GMs have a good team and coaches to prepare with.

AN: What role do books play in the betterment of a chess player? Do you think it’s a good way to improve?

RS: Of course, books are very important. In my own case, I didn’t have a personal coach. My family too disapproved of my chess playing initially since they didn’t know how secure my life will be playing chess. Nobody played chess in the family so no one thought I could have a stable career being a chess player. So, in the beginning, it was all self-study for me. What helped me get better during this time was books. If I had not had the books I studied from back then, maybe I would not have become an IM. Of course, I did attend a couple of GM coaching camps later but never had a personal coach and that’s when my books and my computer came to the rescue. There is such a lot of knowledge packed in those books, after all! If one cannot afford expensive coaching and still wants to become a master, my suggestion would be to read as many books as possible.

AN: You seem to be totally enchanted by the books you’ve read. Can you tell us which book is your favourite?

RS: I like Dvoretsky’s books very much. I feel, in a way, he was my personal coach. I have studied almost all of his books. Other than Dvoretsky, I also like books by Jacob Aagaard.

AN: But for an aspiring player, there is a plethora of books to choose from. How should one go about finding the right course for himself in these books?

RS: This is a very important question. These days, there is so much information available that it is very difficult to ascertain what one should study and what can be omitted. So the best approach, in my opinion, is that you should first ascertain where your interest lies. That would help you determine what suits you better. For example, a tactical player you should first start with tactics whereas if you prefer positional play, you should start with books on strategy. That way you will learn faster. And once you are confident enough that you can handle something other than what you’re reading, you should go for books on topics that you’re not comfortable with.

AN: Do you mean a player should start with learning the middle game?

RS: Yes the middle game is very important. After you’ve studied the middle game, you can go on to the endgame and lastly the opening. What most players do is that they start with learning openings and that’s not the right approach.

AN: Who is your favourite chess player?

RS: From the classical times, Fischer (smiles) is my all-time hero. Among the current players, I like Carlsen’s style and will very much.

AN: We have come to the end of the interview, Rahul.  My last question to you is: what role has your family played in your chess journey?

RS: Family support is very important. Unfortunately, in my family, no one was interested in sports. Everyone was very good at studies. Many in my family have become doctors, engineers, IAS and IPS officers etc. So, in the beginning, my father was against my chess playing. He couldn’t understand how anyone can make a decent living by playing chess. But when he saw my passion and dedication towards the game, kind of acquiesced. And once I started performing well, he supported me wholeheartedly. Now they are very happy that their decision to give me a chance to pursue my dream turned out to be a very good one.

AN: Thank you so much for your time. On this note, I’d like to wish you all the best for all your future endeavours; and once again, many congratulations on winning this tournament.

RS: Thanks so much, the pleasure is mine.

Former Commonwealth gold medalist and 10-year-old Candidate Master Sahil Dey, pride of North-east was also a participant of the tourney and he did played some really exciting chess to upset some of the big players around. I approached him to share one of his game for this article and he happily annotated his win against IM Ramanathan Balusubramaniam from the recently concluded Sardar Prakash Singh Memorial tourney. A fine attacking game which I enjoyed quite a bit. I hope you too will like it and get a peek into Shahil's style of play. 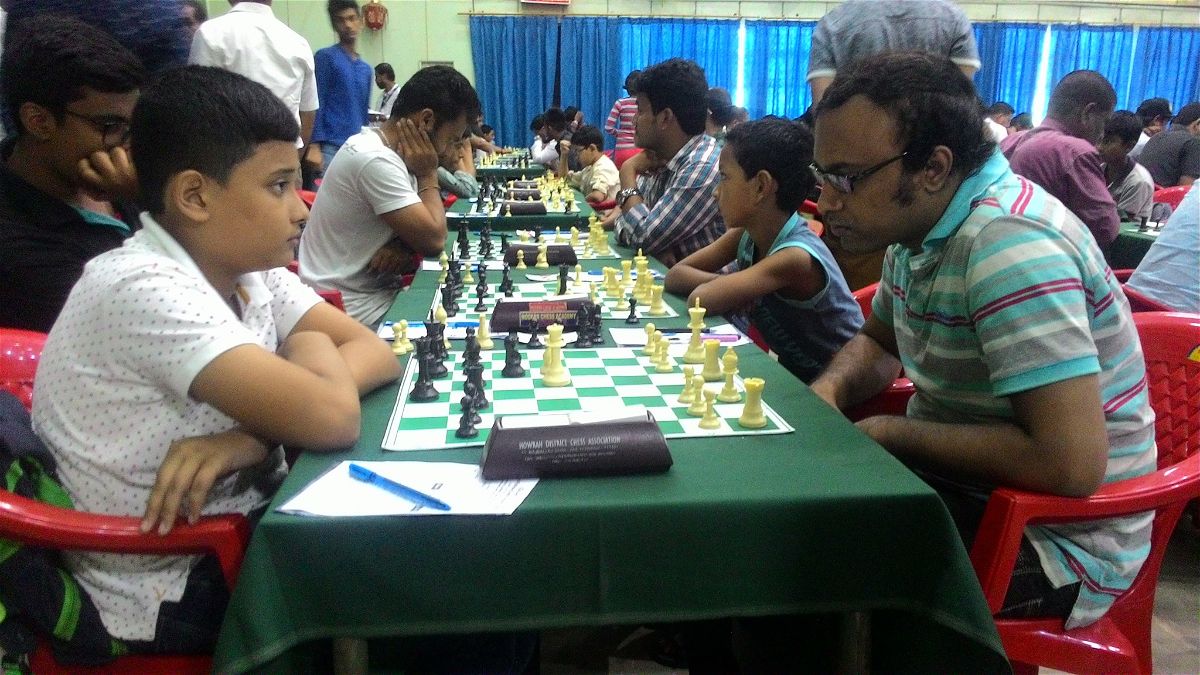 Nongsha Angon is an aspiring chess player who fell in love with the royal game only two years ago in 2015. When he is not playing chess, he loves playing the guitar and the flute. He also has a 2nd DAN black belt in Manchurian Kung Fu and a black belt in Taekwondo. His aim is to establish himself as a chess player and play chess for the rest of his life while simultaneously promoting chess in North East India. Currently, he is pursuing a degree in English at IGNOU.

Nongsha sent us this article with the following words:

"Its really an honour for me to write for ChessBase India! Never ever before have I written any articles, but reading the regular coverage of the Indian chess scene which ChessBase India provides has gave me enough confidence to write my first article. I was also very nervous to speak with IM Rahul Sangma and do an interview with him, but somehow gathered enough courage to approach him for a short interview. Once again thanks to ChessBase India for frequently updating superb interviews from around the world which are very rich in quality. Rahul was very humble and readily agreed to my request."

Nongsha, we at ChessBase India feel proud that you learnt so much from reading our articles. We thank you for your contribution and for promoting chess is Assam and North East India.

You, dear reader, can also contribute to the ChessBase India newspage. Just drop a mail to us at chessbaseindia@gmail.com