Just within a few years of becoming a Grandmaster, Vidit Gujrathi has established himself as one of the best players in not only India but also the world. Recently, he was able to book a spot for himself at the Chess World Cup by clinching a bronze at the Asian Individual Championship. Also, he is merely a stone's throw away from reaching the 2700 rating mark, a feat only three Indians have been able to achieve so far. To get to know this 22-year-old genius better, ChessBase India's Aditya Pai caught up with Vidit in his hometown of Nashik.

Nashik, 2001. Chess culture in the city was at its prime. Several tournaments were being organised at the local level and all of them would see a full house of attendees; chess coaches were abundant and there were many others too who were interested in the game. Amid this bustling chess culture in the city, a new name began to emerge – Vidit Santosh Gujrathi. Merely seven years old, he quickly made a name for himself in the local circuits winning one event after another. “What is it about Vidit that makes him so successful?”, asked some of the parents of his competitors to his coach. The man benignantly replied, “He just loves the game. Call him to play chess anytime, anywhere, and he’ll be there.” His father too realised very soon how dearly his son loved the royal game. He heard Vidit murmuring some chess moves while he was asleep and just knew that his son was born to play chess. 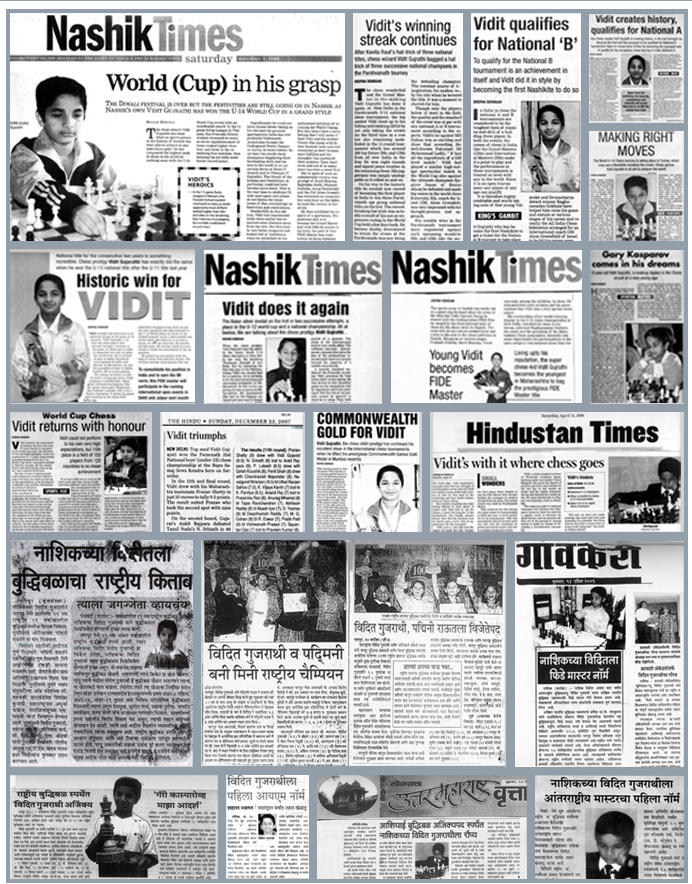 In no time, Vidit made headlines!

A lot of water flowed under the bridge, seven years went by. But Vidit’s love for chess did not deteriorate a whit. Making his way through state and national level events, he was now geared up to etch his name on a global stage. In 2008, he played at the World U-14 championship in the Vietnamese city of Vũng Tàu. In the eleven gruelling rounds that ensued, he crossed swords against some of the big names of today like Benjamin Bok and Dariusz Swiercz. In his final round game, he was so restless to win the World U-14 title that he blitzed out all of his moves and yet won in style. With this, he not only became the World U-14 champion but also the first Indian to achieve the feat! 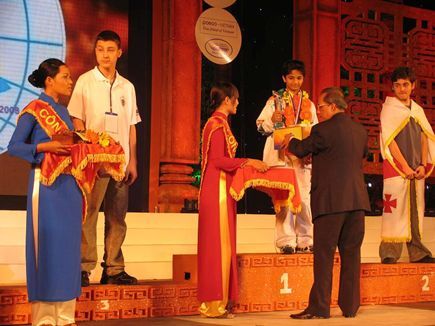 While being crowned as the World U-14 Champion

His parents played a big role in his success. It was they who ensured Vidit got the right coaching and other essentials to excel at the game. It was a testing time for them initially. Since Vidit was too young at the time, he always needed to be accompanied to tournaments. His mother then decided to take a step back in her career and reduced her medical practice to help her son pursue his dream. Managing funds for his entry fees, accommodation and travel was another problem. “Back then, I was repaying a loan I had taken to start my clinic. And Vidit’s tournament and coaching expenses were so high that there was a time when I had to take yet another loan to fund Vidit’s chess.

His mother also ensured that Vidit was fully taken care of when he played in tournaments. She would carry tiffins of home cooked food along for Vidit to eat between rounds. To tell you a funny story, other parents laughed at us initially when we did this. But when Vidit became successful, these very parents copied the practice” reminisced Vidit’s father, Santosh Gujrathi, with a chuckle. 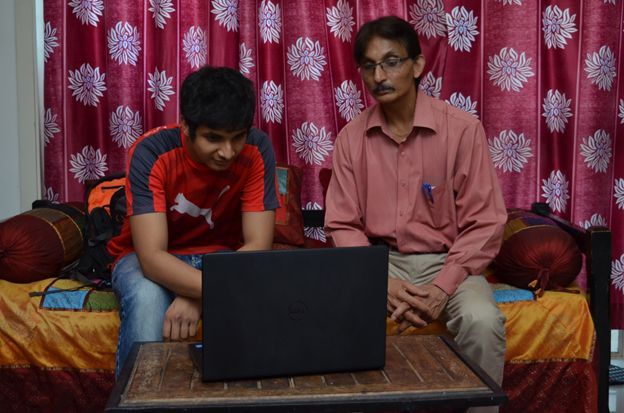 Vidit’s dad can’t beat him anymore but loves spending time with his son, going through his games. (Photo by Gaurav Gawand)

On Vidit’s part, he just feels blessed and can’t be enough grateful for all the encouragement and support that his parents have bestowed upon him. Despite not knowing a lot about the game, they constantly spoke to people and took advice to find the best coaches for him and ensured his unhindered progress. And when funds fell short, Vidit’s chess prowess came to the rescue. Thanks to his outstanding performances at national and international level events, he earned scholarships from the Sports Authority of India and ONGC.

In his father’s opinion, the scholarship granted by the Sports Authority of India was particularly crucial. It was because of this scholarship that Vidit found a trainer like Alon Greenfeld who was not only his coach but also his third parent. “I think we’ve been very fortunate to have found a coach like Alon Greenfeld because he is not only good at teaching chess but he also has some fantastic parenting skills up his sleeve. Vidit never felt my absence when he was learning with GM Greenfeld”, said Santosh Gujrathi.

Today, the 22-year-old Grandmaster represents the team of ONGC at the national level and is also employed by the firm. Another big role was played by the Lakshya NGO in Vidit’s path to success. They organised several coaching camps for him. In one of these camps, he got the opportunity to work with Kasparov’s former second, Evgeny Vladmirov, with whom he trained until 2015. This was something Vidit wholeheartedly welcomed as he has been fascinated by Kasparov’s dominance during the 80s and the 90s and working with Vladimirov gave him the opportunity to look deeply into the life of one his idols.

Another big learning opportunity came his way when the current world no. 12, Anish Giri, invited Vidit to be his second. This, Vidit feels, will be instrumental in his progress as he’s getting to know what it is like to play at the absolute elite level. Also, he’s simply awe-stricken by how relentless Giri is when it comes to preparation. Talking to ChessBase India, he said, “Despite working for 10-12 hours a day, he (Giri) doesn’t find his schedule tough. And it’s mainly because he enjoys what he does. That’s one thing I got to learn from him”. 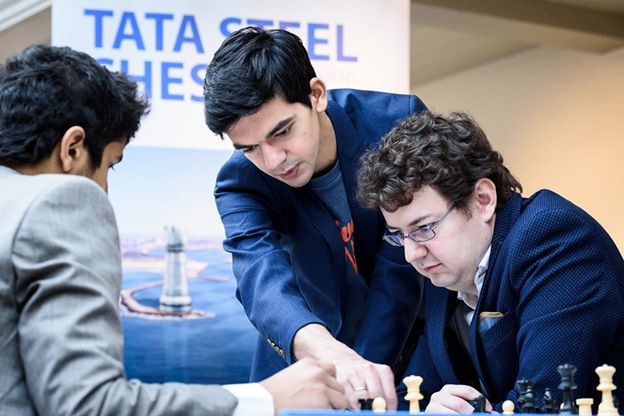 In his free time, Vidit loves watching American sitcoms and likes tuning-in to the songs of Linkin Park, Coldplay and Ramstein (although, he says he hardly understands German). At one point he was very enthusiastic about photography. Technology is also something that interests this young Indian GM. He also likes indulging in all kinds of sports and says he often goes swimming or plays table tennis or badminton during tournaments after his rounds. “You name it, and I’ll play it,” he said when he was asked which sport he likes the most. So, I challenged him for a round of arm-wrestling just to check if he was really up for anything, as he claimed. With an almost child-like enthusiasm, he accepted my challenge. What happened next, you can find below!

“That’s a 2687 rated for you,” I exclaimed after losing miserably to him! (Video and editing by Gaurav Gawand) 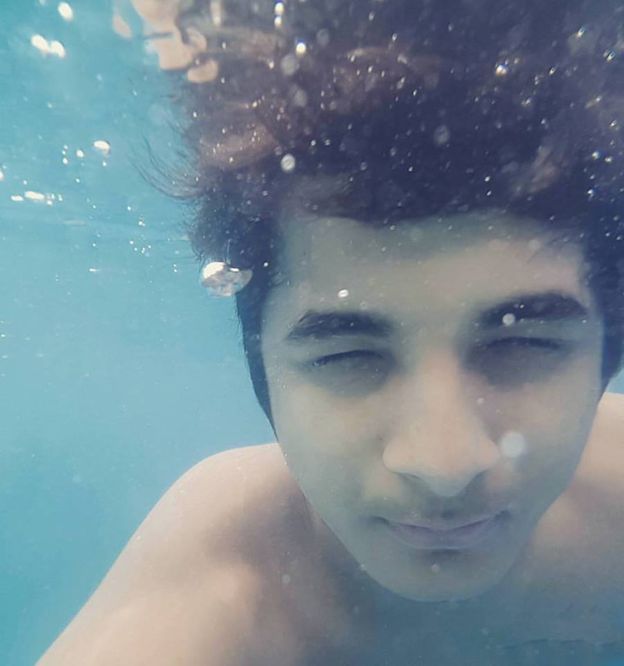 Pursuing two interests at a time – swimming and photography! 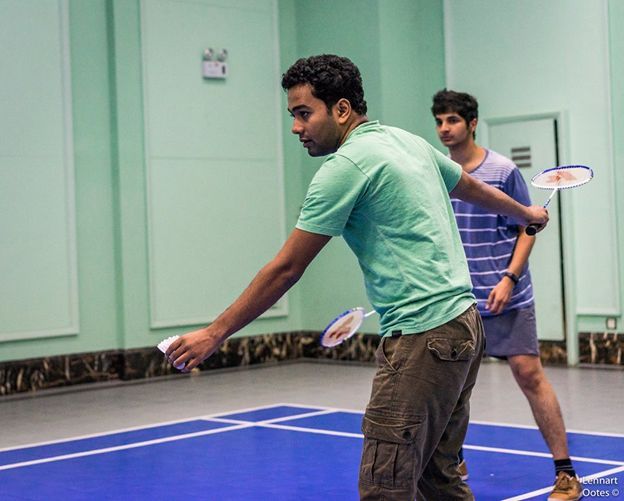 A bit of badminton between rounds of the Asian Continental 2017 (Source: Lennart Ootes)

Despite being a world-class player, this soft-spoken young man craves for simple things in life. On weekends (whenever he is in India that is), he loves catching up with his friends and going out to have misal, a snack his hometown, Nasik, is famous for. While researching for this feature, I had the opportunity to join Vidit and his gang for a zesty treat. While at the restaurant, a woman recognised him and asked for a selfie along with some chess advice for her 16-year-old son, who also plays chess. In a very humble manner, Vidit answered all her questions before he came back and joined us. 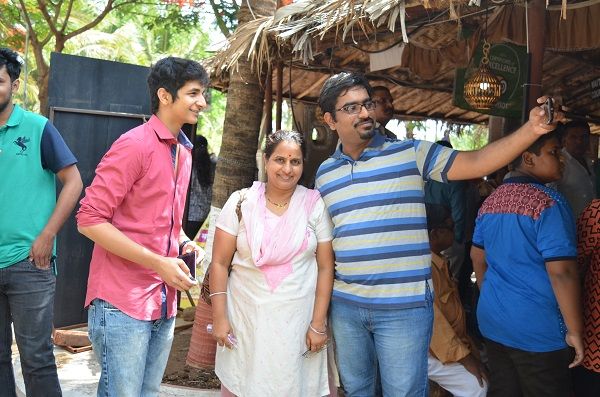 The lady didn’t know which camera to smile at!

Vidit also has an innate love for puzzles. The more challenging the puzzles are, the better he likes them. This is also one of the reasons why he loves chess, he said. We too were curious to know how the mind of this genius works. So we gave him a couple of puzzles and asked him how he reached the solution. And to satiate his thirst for challenges, he was asked to solve the puzzles blindfolded!

Pattern recognition is key, it seems! (Video and editing by Gaurav Gawand)

What’s also interesting is that his parents, despite being doctors, never really wanted Vidit to become a doctor, or even take up a conventional career although his academic grades were exceptional. In fact, he’d scored 93% in his class 10 examination. On Vidit’s part, he says taking up chess full time was something that happened gradually and there was never a point where he decided to take it up as his career. But then, taking up a career other than that of a chess player was simply out of question for him, says his father, as chess was something that has always made him happy.

Recalling that one time when he asked his son if he wanted to take up a professional course, Dr Gujrathi says, “I remember asking him once if he’d like to do a professional course. His answer was clear and simple – There can be many engineers but only one World Champion. I want to be a World Champion. The zeal in his eyes left me amazed. I couldn’t say anything but affirm”. 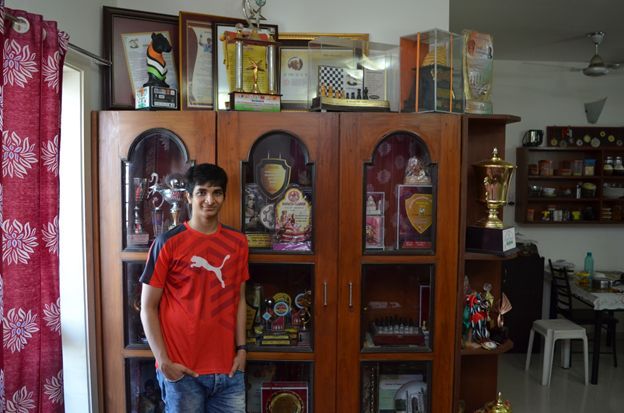 In pursuit of his dream, Vidit has taken long strides achieving one milestone after another. Besides winning the World U-14 Championship in Vietnam, he has also been a bronze medalist at the World Youth Championship in 2013, held in Turkey and has been a member of the Indian Olympic team at the Baku Olympiad, 2016. He is currently ranked 52nd in the world and with an Elo rating of 2692 and is well on his way to becoming the fourth Indian to cross the coveted 2700 rating mark after Vishy Anand, Krishnan Sasikiran and Pentala Harikrishna. At the recently concluded Asian Individual Championship, he secured himself a spot at the Chess World Cup with his bronze medal winning performance. With this, he’s a step closer to achieving his big goal. But what remains to be seen is how far he can reach in this 128-player-knockout.

Vidit on the Caro Kann:

Vidit has recorded two wonderful DVDs on the Caro Kann opening for ChessBase. You get both of them and add a solid opening to your repertoire for just Rs.1899/-