The strongest tournament of the year 2017, Norway Chess came to an end. Levon Aronian displayed some fantastic chess to not only win the tournament, but also gain 16 Elo points and propel himself to world number four. Anand had to be content with the eighth spot with 4.0/9. Perhaps, this was one of the worst tournament for World Champion Magnus Carlsen who finished ninth. Aditya Pai, who has been covering this tournament intensively right from day one, brings you the final round report along with analysis by GM Alexander Yermolinsky.

Photos by Lennart Ootes and analysis by GM Yermolinsky

The strongest tournament of the year, Altibox Norway Chess, witnessed a spectacular finale yesterday evening. The battle for the title prize was mainly between the tournament leader, Levon Aronian and Hikaru Nakamura, who was just half a point behind him. However, the rest of the players were not at ease either. While the tail-enders wanted to improve their standing in the tournament, the ones in the middle of the table would have loved to finish a place or two above their current position. After all, there was a prize-fund of € 249, 000 on the line. And at the end of nine grueling rounds, it was Levon Aronian who emerged on top of the field that included eight out of the world’s top ten players. 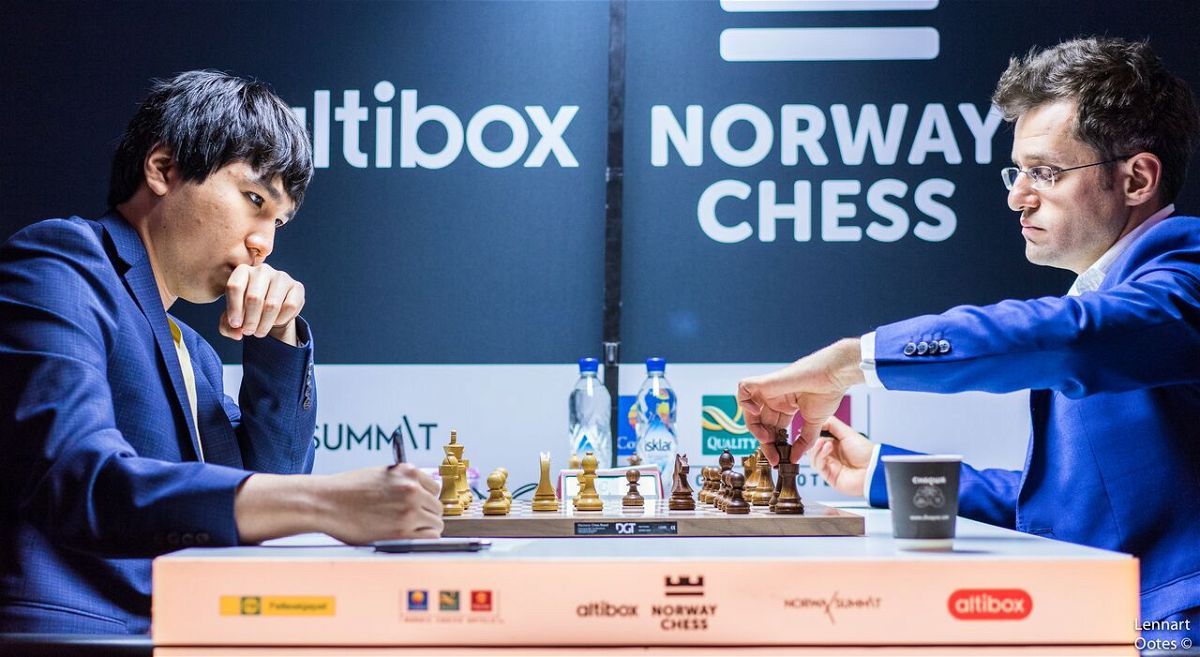 Aronian drew his last round game against Wesley So

Talking about his tournament win, Aronian said he feels the general level of his games was good. This is his second major win this year. The last one came at the Grenke Chess Classic in Baden-Baden, Germany where he won with a round to spare. When asked if this run of form makes him think again in terms of winning the World Championship, Aronian said, “I’d never stopped thinking about winning the World Championship. The day I stop thinking about it would either be the day I quit playing chess or the day when I finally become the World Champion.” He further said that despite all of the disappointments he had faced in the past, he’s taken them as temporary setbacks and moved forward with undeterred enthusiasm.

All players fought valiantly in the final round and two out of the five games ended with a decisive result. Fabiano Caruana, who had not won a single game at this event so far, was able to bring his countryman, Hikaru Nakamura, to his knees. Hikaru was the only player who had a chance to catch Levon Aronian in the lead. But since that didn’t happen, the Armenian super-star’s draw against Wesley So was enough to seal his first place.

Anand drew against Carlsen and the game between Sergey Karjakin and Maxime Vachier-Lagrave also ended peacefully after 30 moves. Vladimir Kramnik played the best game of the day probably and beat Anish Giri in just 20 moves! 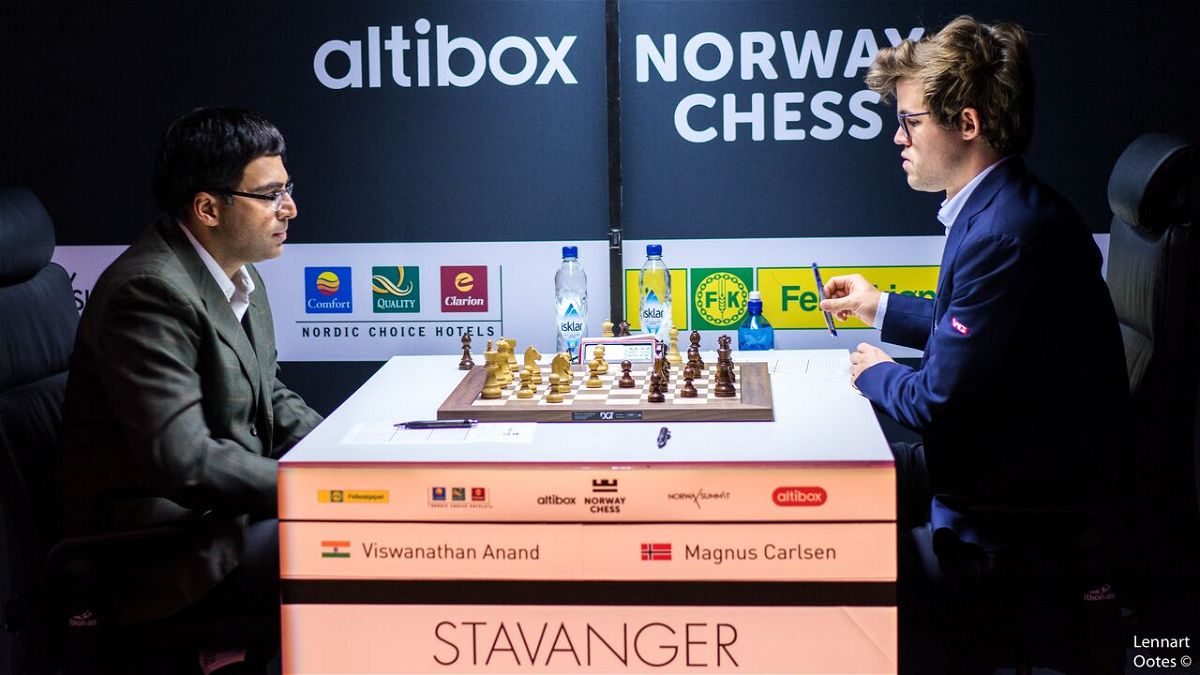 The World Championship match-up of 2013 and 2014 was seen again. Anand managed to draw his game against Carlsen

The five-time World Champion from India, Vishy Anand, had the white pieces against the current World Champion, Magnus Carlsen. With a score of 3.5/8 each, both players had had quite a modest result in the tournament so far. A win would at least bring one of them to a 50% score. Also, Magnus, after hungrily hunting his first win of the tournament, had finally succeeded in the previous round. He must definitely have been in high spirits and could have been expected to try pressing for an advantage, even though he had the black pieces. It was Anand, however, who got an edge out of the opening but the game ended in a draw after 32 moves.

Anand once again deployed his apparently favorite opening of this tournament, the Italian, in his game against Carlsen. During the game, Anand thought that he had an edge and even Magnus agreed with this assessment. However, as the game progressed, both players were surprised by the amount of counter-play Black had in the position. After the game, Anand said maybe he rushed a bit with his move 20. Ra6 and that he should probably have played with some more subtlety. Nevertheless, he felt that Black had a solid position. Further, he said that he found the position after black’s 22…Nf7 a bit annoying because then Carlsen was able to at least swap a pair of knights and even if he won a pawn somewhere, it wouldn’t have been enough to win. And that’s exactly what happened later. Carlsen sacrificed a pawn and was able to exchange not one but both pairs of knights.

In the resulting position, even though Anand had an extra pawn, he chose to repeat the position and hold a draw because of the activity of Black’s major pieces. About his performance in the tournament, Anand said that he was satisfied with his performance in the second half of the tournament but overall the result was slightly disappointing. Talking to Nigel Short, he said, “Obviously, one doesn’t dream of (scoring) -1. But I had a bad start; and under the circumstances and in this kind of a tournament, it was a reasonable recovery. +1 in the last five games is fine. But I shouldn’t keep starting with -2,” (laughs).

Magnus Carlsen, who attended a press conference with the official commentators for the first time after his loss in round 4, explained his tournament result saying that although the first two rounds went okay for him, he wasn’t feeling fresh in his head in his game against Nakamura in the third round. This trend continued in the subsequent rounds as well. He felt, the worst point of the tournament for him was during the fifth and the sixth rounds when he couldn’t make anything of his whites. He further said that he not only played poorly but he also lacked motivation. And in the end it was the lack of confidence from the start along with some good play by his opponents that led to his downfall. Magnus also explained his choice of number during the drawing of lots saying it wasn’t because he wanted to play Wesley So in round 1 that he chose the number 3. It was more because he wanted whites in the fifth and the sixth rounds. 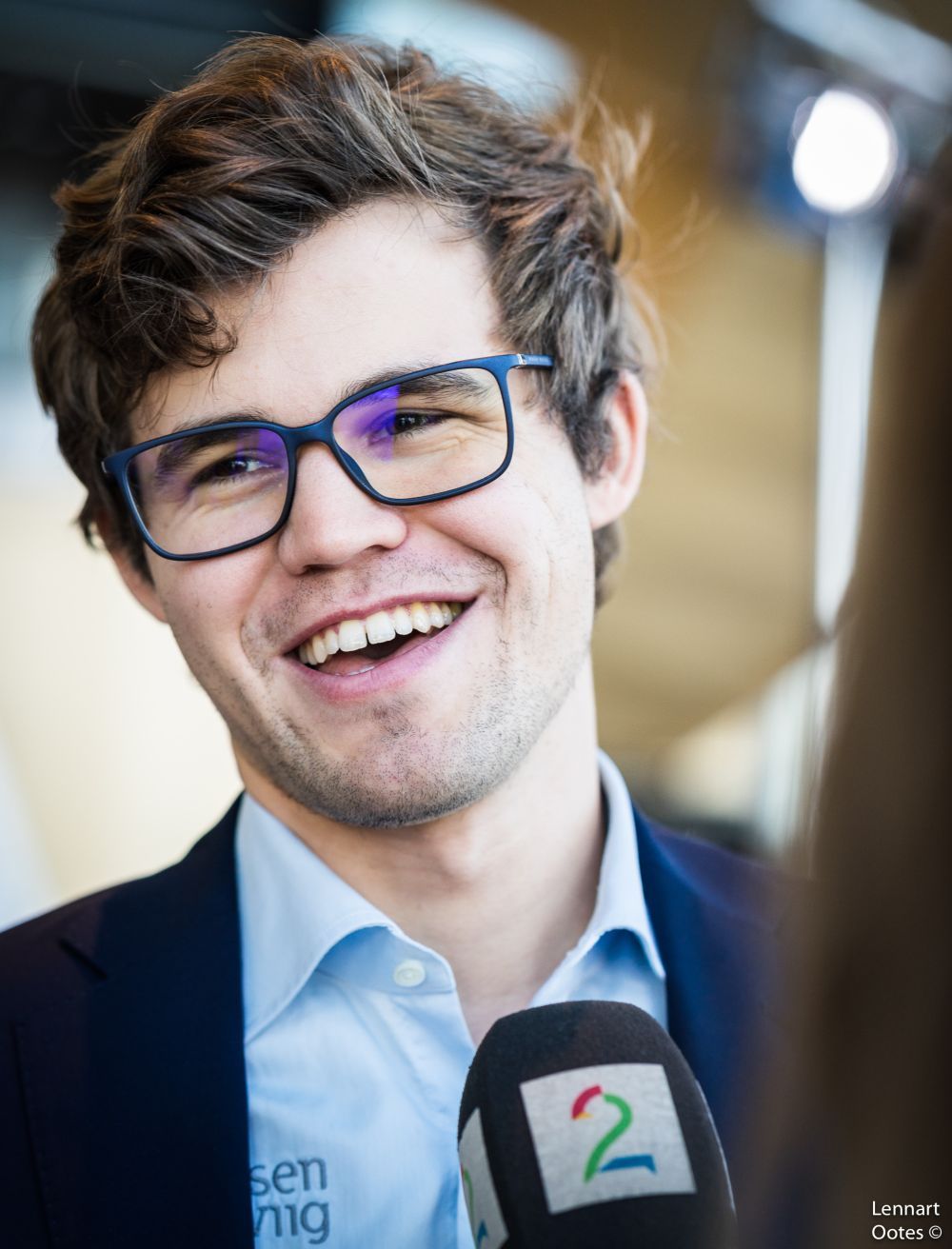 Ninth place in a super tournament is not a normal result for Magnus, but he kept himself in good spirits 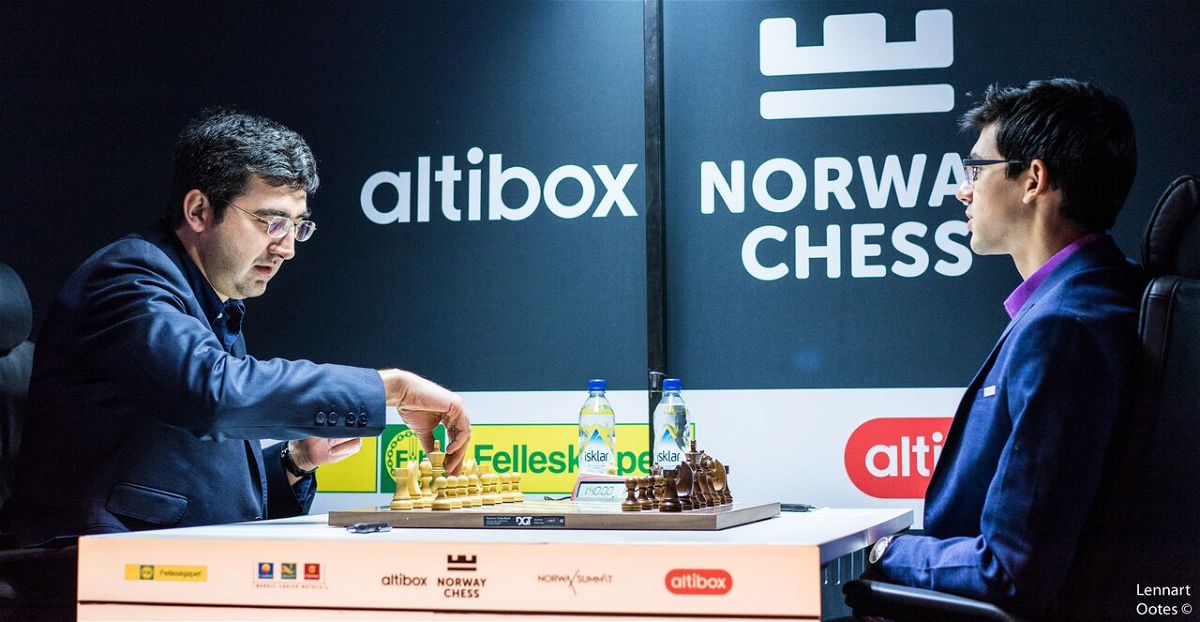 Kramnik won a complicated game against Giri in just 20 moves!

Kicking off with an unusual Queen’s Pawn opening, Vladimir Kramnik came back strongly after last round’s defeat by beating Anish Giri. Talking about the game, Giri said he thought Kramnik’s 8. Nc3 was pretty dubious and he wanted to punish this. And given his advantage in space and the miserable position of Kramnik’s dark squared bishop, it really did look like things could end up badly for Big Vlad. But by the twelfth move, Giri admitted that he thought he was close to being completely lost. Giving his thoughts about the game, Kramnik said he felt that the position arising after black’s fifth move, 5…c4, was very complicated and he never thought anyone would play it.

After the game, both players agreed that Giri made the most critical mistake of the game when he played 9…Bd6 instead of bringing his knight out to c6. Another crucial mistake from Giri was 15…g6 which allowed Kramnik to free his pieces at the cost of a pawn. Just three moves after this, Kramnik had a completely winning position and Giri had to resign in merely 20 moves. 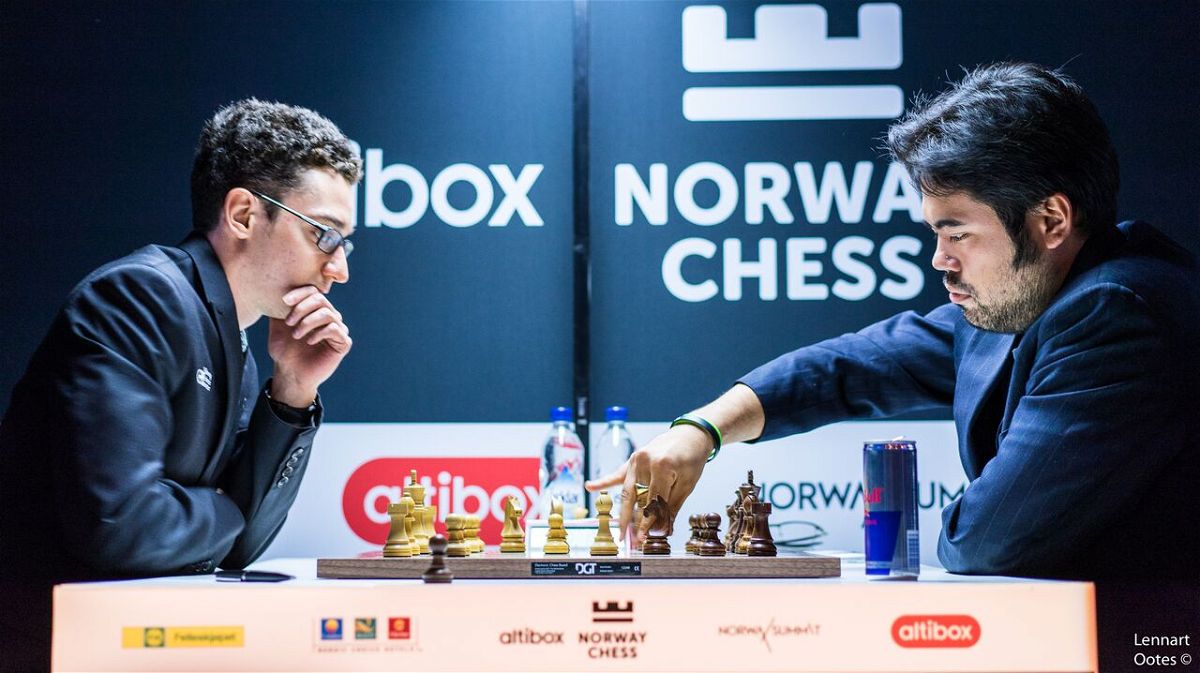 Caruana won his first game of the tournament deploying a line he played in his childhood days!

In the other decisive game of the round, Fabiano Caruana was able to clinch his first win by beating his countryman Hikaru Nakamura. Desperate for a win in order to catch Aronian in the lead, Nakamura went for the razor sharp Najdorf variation of the Sicilian Defense. As play proceeded, the game drifted into the waters of the poisoned pawn line where Caruana went for 8. Qd3, a line which he said he used to play when he was a kid. Interestingly, he also pointed out that Black has at least seven different ways to draw the game after white’s 8. Qd3. Of course, Nakamura wasn’t going to go for one of those given that he needed a win.

As play proceeded, Caruana came up with a novelty on his 15th move and said it was fortunate that Nakamura wasn’t aware of the move. On move 20, Naka was forced to exchange queens and placed his knight passively to hold his position together. But Caruana kept playing energetically and on move 39, Nakamura was forced to give up his rook for white’s bishop to parry Caruana’s mating threats. And although Nakamura limped on until the 59th move, the result was never really in doubt after Caruana had won the exchange.

In the final standings, Aronian, with a score of 6.0/9, finished as the title prize winner. Kramnik, with his fantastic win against Giri made it to join Nakamura and share second place. Both of them scored 5.0/9. Caruana, Giri and Wesley So shared the third place with a score of 4.5/9. Anand, with a score of 4.0/9 secured the fourth spot along with Maxime Vachier-Lagrave and Magnus Carlsen. Sergey Karjakin finished at the bottom of the leaderboard with 3.5/9.

R6: Altibox Norway Chess: Viswanathan Anand shows he is far from 'over' with Round 6 comeback