Just past the halfway mark, things at the Altibox Norway Chess have begun to heat up. In round six two of chess world’s crème-de-la-crème succeeded in breaking through their opponent’s defenses, securing victory. While Viswanathan Anand proved his mettle yet again by convincingly defeating Fabiano Caruana, Levon Aronian continued his good form to beat the apparently out-of-shape Vladimir Kramnik. Levon is now the leader along with Hikaru Nakamura. We have detailed analysis of Anand's win with diagrams and explanations.

Vishy Anand had been suffering from poor form in the tournament. In fact, the German GM Jan Gustafsson went so far as to count out any winning or even drawing chances for the five time world champion in his round predictions before the round. 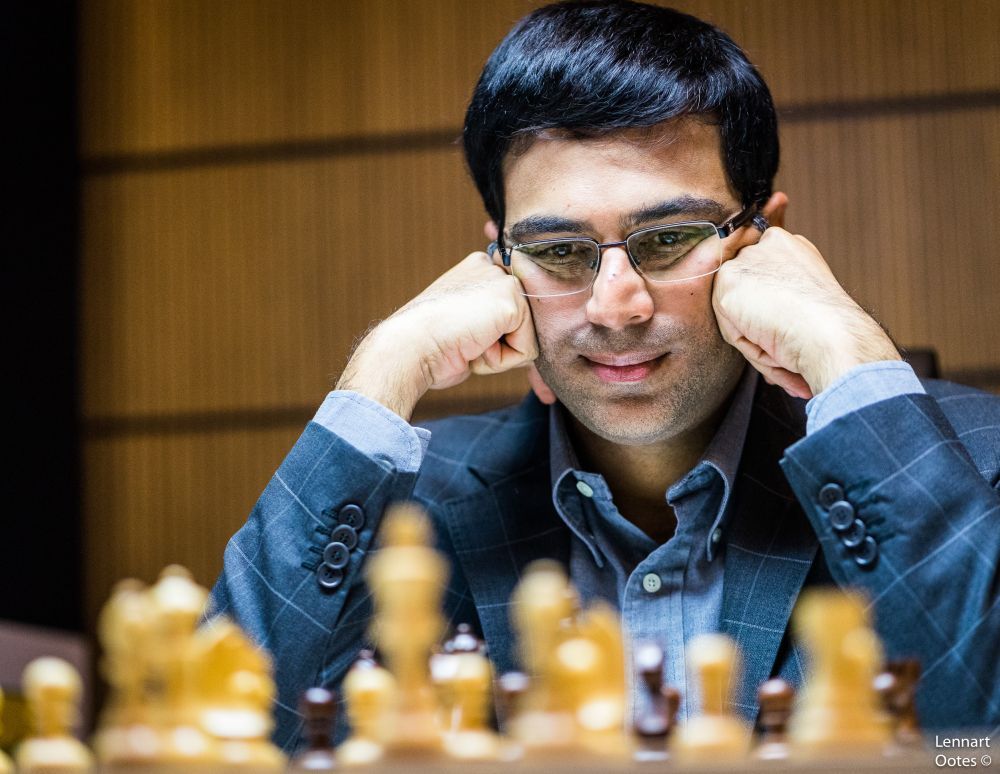 But the Madras Tiger was in for the kill

Playing with the black pieces, he audaciously repeated the same variation of the English Opening with which he had lost against Giri in round four. The thing about Anand is that he doesn't give up on the openings that he plays. He analyzes them and tries to find improvements. And even after he loses, it is his opponents who are afraid to try out the same line because they know Vishy would be well prepared. Like in this game. Anand had lost in this line to Anish just a round ago, but he tries it once again and Caruana abstains from the same variation that Anish played.

Fabiano went for 4. Nf3 instead of attacking black’s bishop with 4. b4, as Giri had done. When the middle-game began, Anand said that he felt his pieces were placed a bit clumsily. He further added that everything could have been well for Caruana if he had been able to find a pawn break on the queen-side. Anand then found a knight maneuver to reorganize his pieces and seized a winning advantage. Caruana’s dark squared bishop, in the meantime, was jailed behind his pawns as a consequence of his opening. At one point, Caruana’s position was so bad that he couldn’t move a piece due to his structural weaknesses. Anand, on the other hand, had built up enormous pressure with his rooks lined up on the ‘f’ file. 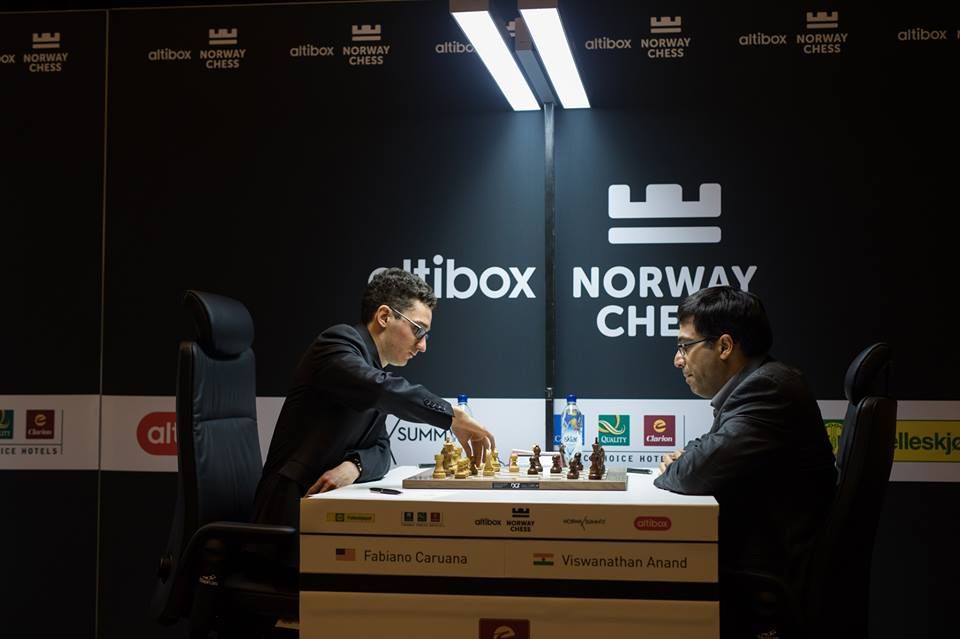 Beating Fabiano, whose rating is well over 2800, is a great feat by Anand

To add to his troubles, Caruana was also in some serious time trouble around the end of the first time control. Seeing nothing better, the American stormed his kingside pawns forward to attack the black king. As Anand pointed out after the game, these pawn advances actually helped improving his own position as it just freed his pawns. By the end, Vishy was able to penetrate into his opponent’s position and carry out a mating attack. Unable to do anything against the checkmate in sight, Caruana decided that he had seen enough and threw in the towel. 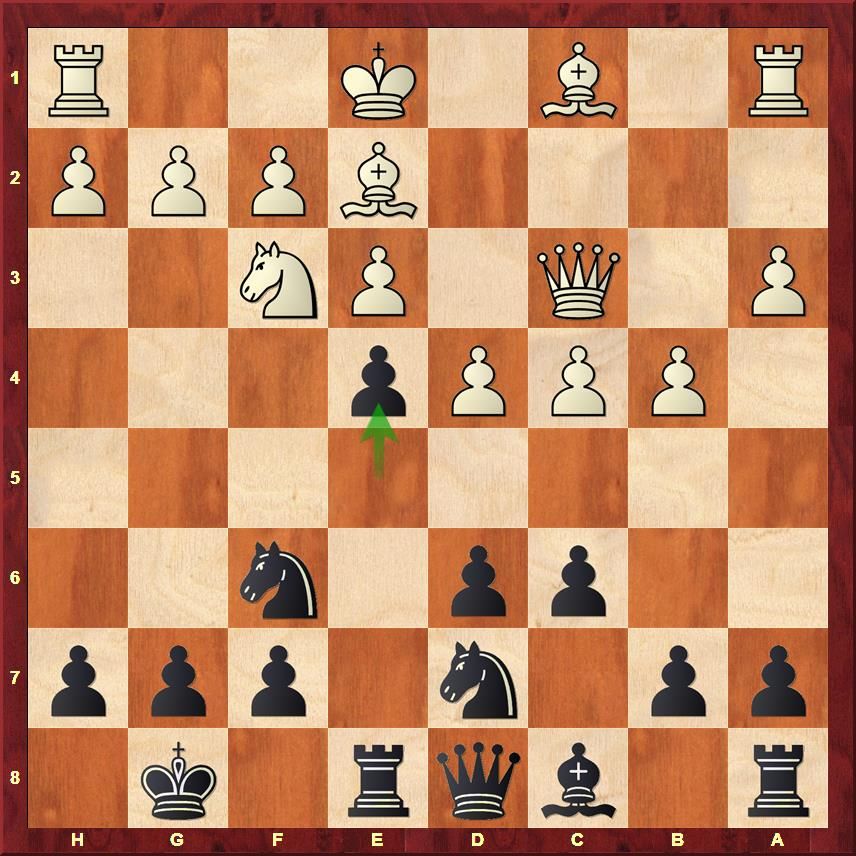 With the move e5-e4, Anand gained space in the centre. Although White has two bishops, it's not so easy to activate them. 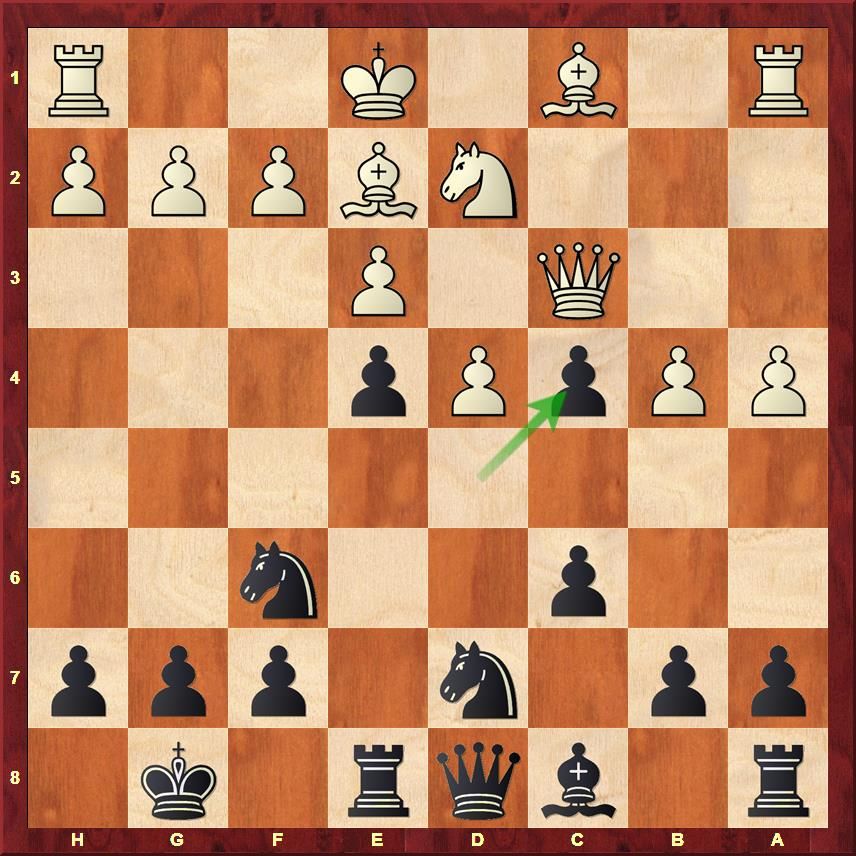 Usually you don't like to break pawn chains. But when you lose something, you also gain something else. Here, the slight weakness of the pawn on e4 is compensated by the availability of the d5 square. 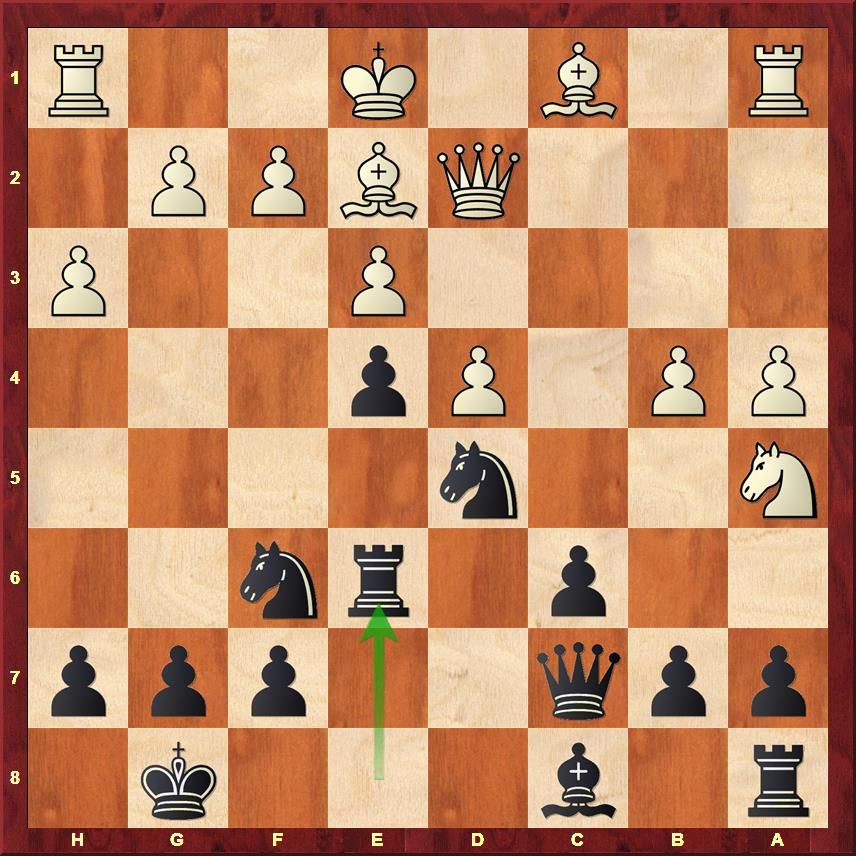 If you wonder, how does Vishy create something from nothing, then here is a move that you must study deeply. ...Re6!? The rook moves up to the third rank. It can not only be used on the kingside as shown in the game but can also be useful on the queenside if White breaks with b5. 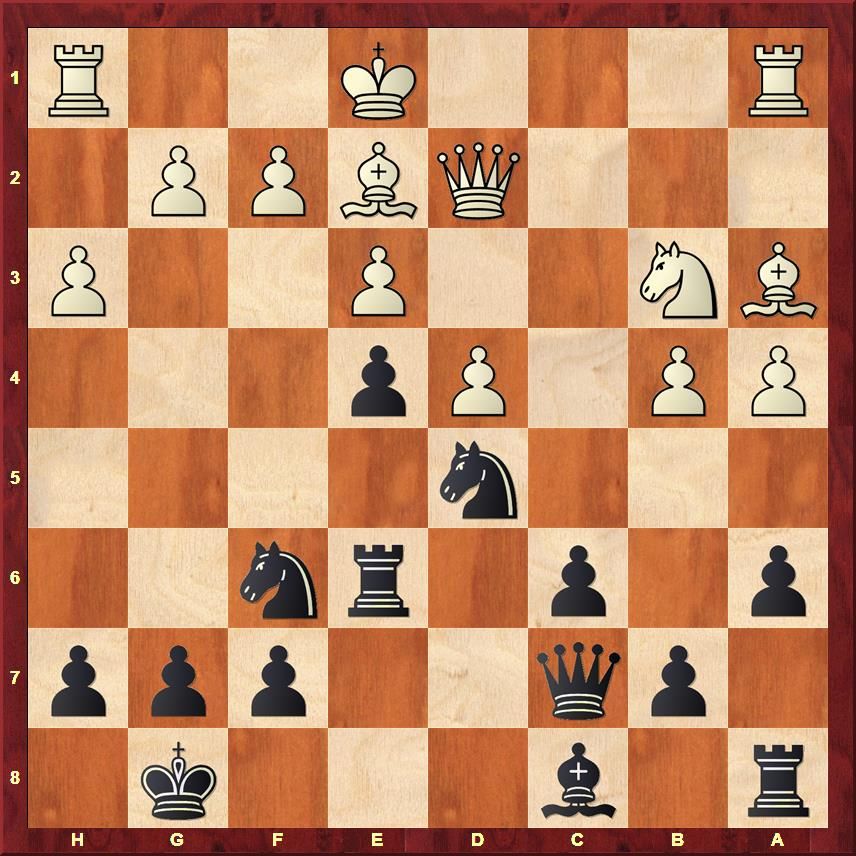 Here's a small trivia. What should Black play? The answer is in the next diagram below. 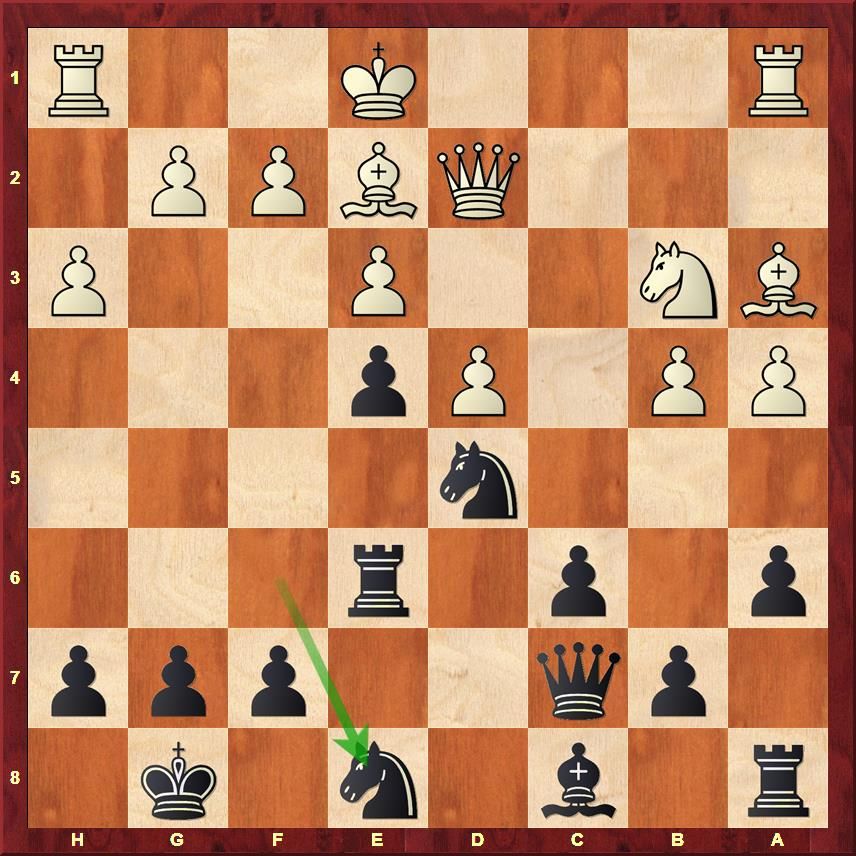 ...Ne8!! this multipurpose fits in perfectly. The rook is going to be transferred to g6 and the knight comes to d6. 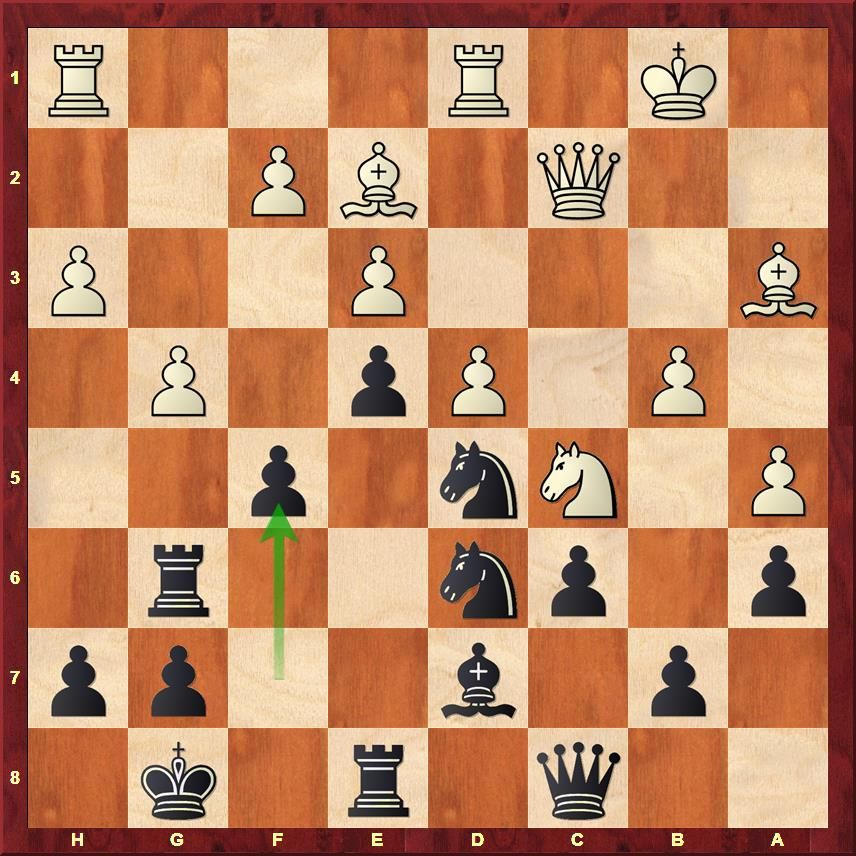 ...f5! breaks up White's structure and also activates the light squared bishop. Also the f2 pawn is a weakness that can be attacked by the rooks. 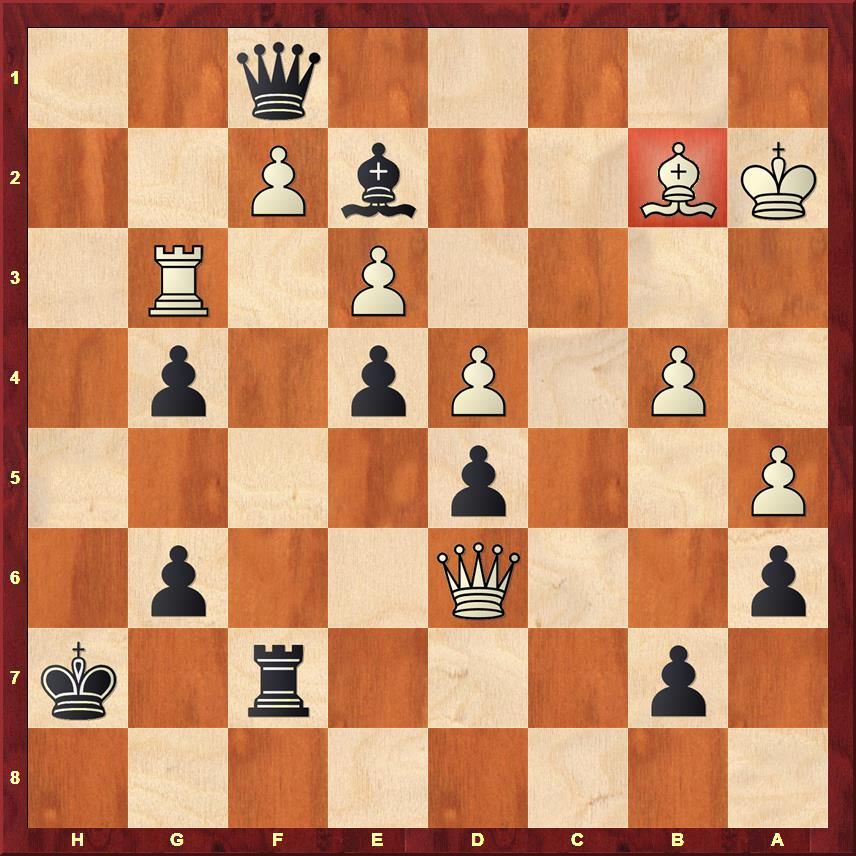 Look at the bishop on b2! Completely passive. On the other hand, the light squared bishop is coming to c4 which will lead to a mating attack. 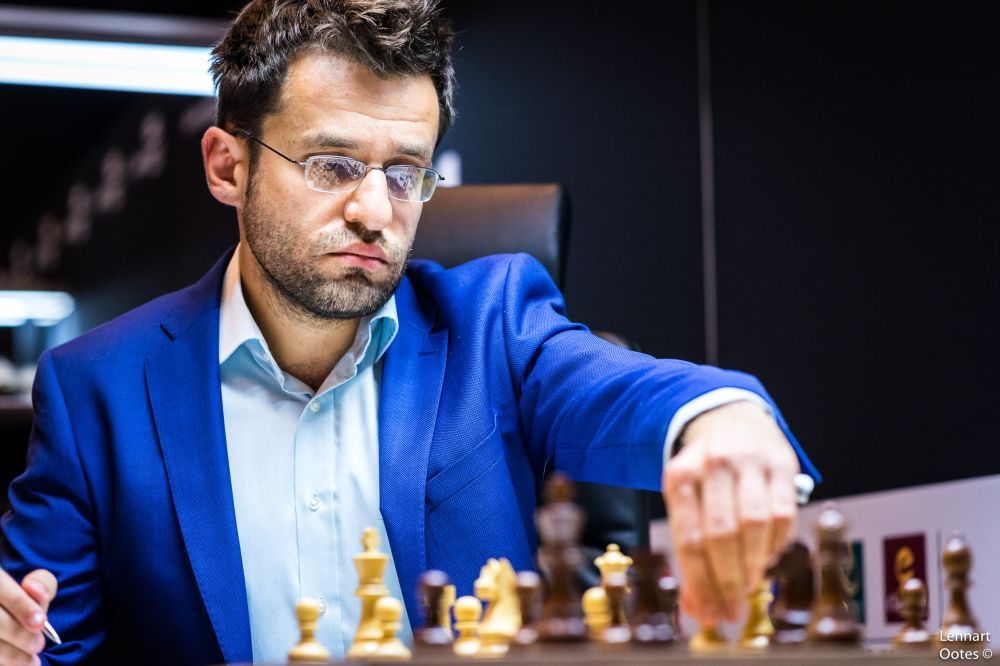 The other decisive game of the round was played between Levon Aronian and Vladimir Kramnik. Although the Russian veteran, Vladimir Kramnik, had had a decent run in the tournament so far, yesterday was just not his day. Kicking off with a Semi-Tarrasch as a counter to Aronian’s 1. d4, he started playing poorly soon after the opening. Things really started going south for him after his errors on moves 15 and 19. Aronian was simply able to trap his opponent’s queen. In order to be able to exchange his trapped queen for white’s queen, Kramnik had to give up an exchange and the resulting position was a totally lost one. Talking to GM Nigel Short after the game he said, “I made around two or three blunders. That’s a bit too much for one game”. 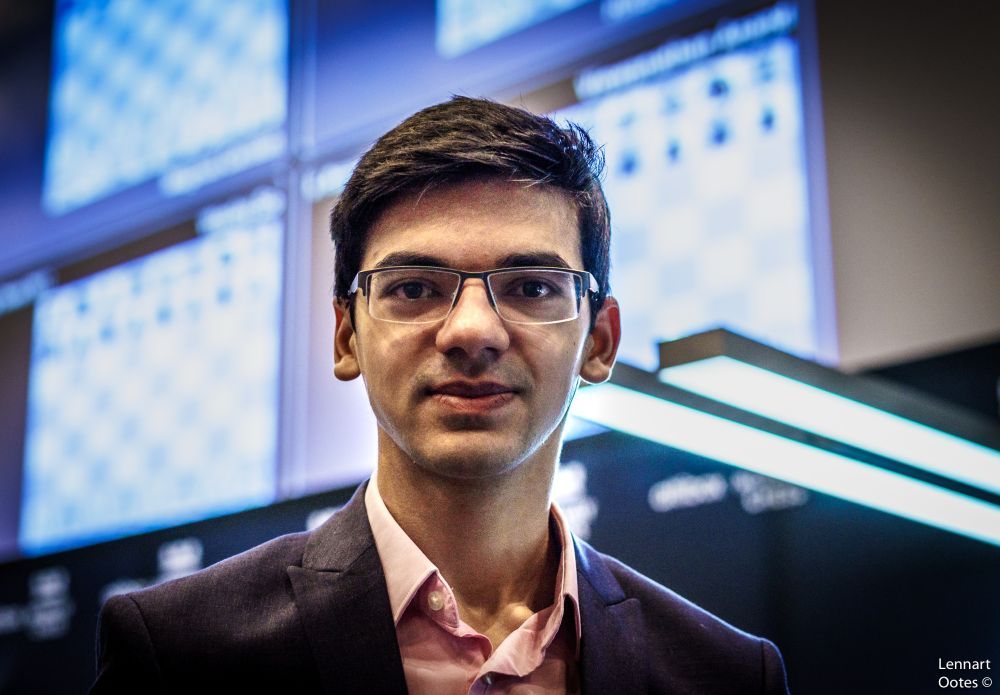 Anish Giri had Wesley So on the backfoot, but couldn’t convert it into a full point

Despite having lost against Nakamura in the very first round, Anish Giri has put up a decent show so far and climbed up the tournament leaderboard. In yesterday’s game, he was pitted against the American number one, Wesley So. Starting off with a Symmetrical English, the Dutchman was able to seize a decent advantage and was pressing throughout the game. At one point, he had almost trapped black’s light-squared bishop – surprisingly enough – on the longest diagonal of the board. But unable to find a way to win the trapped piece, Giri went for the endgame with an extra pawn. Wesley, however, made the most of the fact that this was a complicated rook endgame and was able to force a draw by repetition after 59 moves of play.

In the game Nakamura-Karjakin, neither player was able to pose too many problems to his opponent in a 54-move-long Nimzo-Indian. 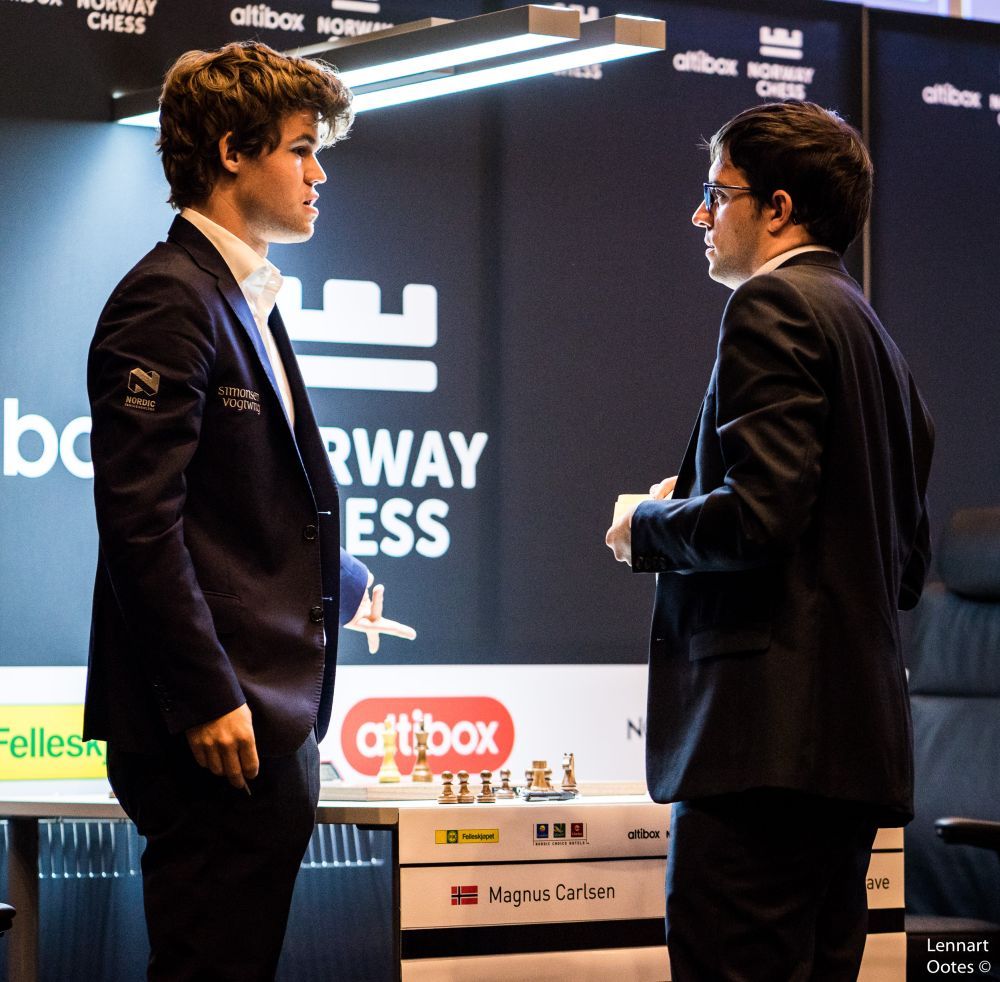 Maxime Vachier-Lagrave was also able to hold Magnus Carlsen to a draw fairly easily with the black pieces. Although the World Champion is hungrily looking for his first win in this event, the Frenchman defended stubbornly until all piece were hacked off the board and only kings remained.

There were quite a few changes to the standings at the end of the sixth round. The most important of them was that Levon Aronian has now joined Hikaru Nakamura in the lead with 4.0/6. After his loss today, Vladimir Kramnik has been joined by So, Giri and Karjakin on the second spot with a score of 3.0/6.

With his win today, Anand has moved up to a shared third place along with Magnus Carlsen, Fabiano Caruana and Maxime Vachier-Lagrave. They have all scored 2.5/6 each. With just three more rounds to go, Anand is going to have a tough time as he will be facing the tournament’s co-leader Hikaru Nakamura in the next round. The good thing is that he will have the white pieces and a rest day before he faces Naka. In that way, his win in this round has come at a perfect time and might just catapult him higher up the tournament leaderboard.