After some sensational games in round 4, players at the Altibox Norway Chess 2017 seemed to have wanted to take things slower. All five games of the fifth round were drawn. While Kramnik and Karjakin fought hard to force a win against Nakamura and Caruana respectively, Levon Aronian unleashed the razor sharp Marshall Gambit against Maxime Vachier-Lagrave. On the other hand, both Vishy Anand and Magnus Carlsen chose to start-off with the Italian opening against Wesley So and Anish Giri. We have analysis, pictures, videos and much more. 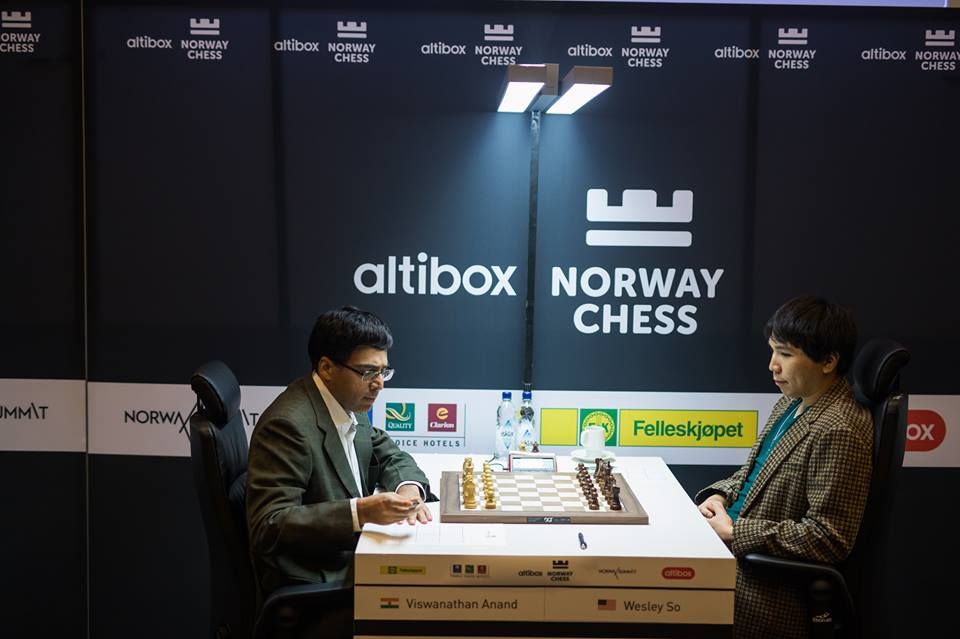 The game between Anand and So looked dull at the outset but had its fair share of exciting tactics lurking in the background. Struggling with his form in this tournament, Anand seemed to have taken a safety first approach for this game. After his second loss in the previous round, he evidently didn’t want to lash out and do something uncanny against someone like Wesley, who has been performing consistently well throughout the year.

However, this didn’t mean that the five-time World Champion wasn’t going to pose any problems to his opponent. He came up with a crafty little pawn sacrifice to try and unsettle the American. However, this didn’t quite help as Wesley said after the game that he had seen Anand’s idea before. Immediately after grabbing the sacrificed pawn, Wesley was able to exchange queens and the position started to look drawish. As Anand demonstrated after the game, he still had some means to tug for an edge. But the American too was up for the task. The position soon liquidated into a dead drawn bishop endgame and the players shook hands in 33 moves. 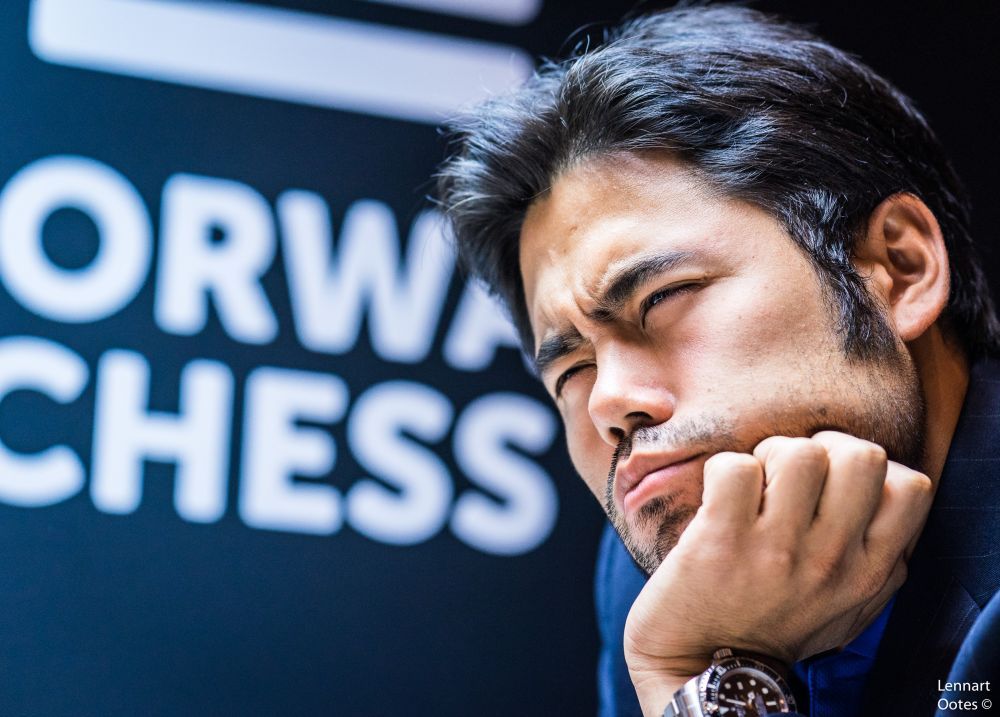 The day’s most thrilling encounter was Vladimir Kramnik against Hikaru Nakamura. Kramnik, playing with the white pieces, employed a zany line to counter Nakamura’s Sicilian and continued playing enterprisingly by offering a piece sacrifice in queen-less middle game to keep pressure on Naka’s position. The American rightly declined the offered knight and defended in a very resourceful manner to liquidate into a rook and knight versus rook and bishop endgame a pawn down. Also, he was hell bent on creating complications. Exchanging his king-knight’s pawn for Kramnik’s king-bishop pawn, he created a passed pawn for himself on the king’s file. After 49 moves, the players signed peace by repeating moves. 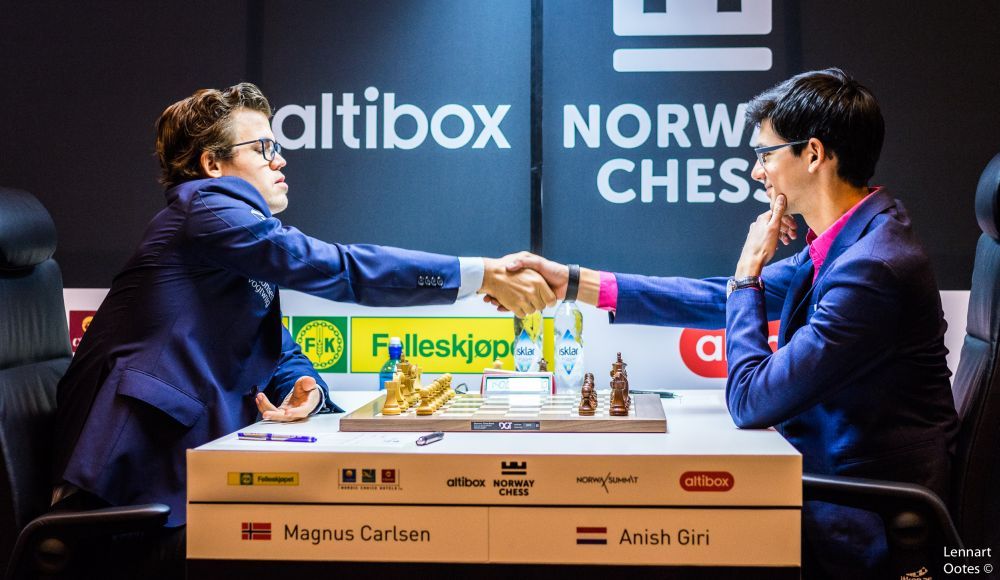 The game between the current World Champion, Magnus Carlsen and the Dutch number one, Anish Giri, also cropped out of the same opening as the Anand-So game. But in this one, playing with the white pieces, Magnus wasn’t really able to squeeze out an advantage. In fact, at one point, it was Giri who had a firm grip on the position and was striving for an edge. After the game, Giri explained that he could have had a better shot at increasing his advantage, but the way he played was a bit too ambitious. Talking to the tournament commentators, GM Nigel Short and Dirk Jan ten Geuzendam, Giri said, “I had a good position without any risk at all. It’s a rare occurrence when you play Magnus. So it’s a pity that I couldn’t pose more problems.” 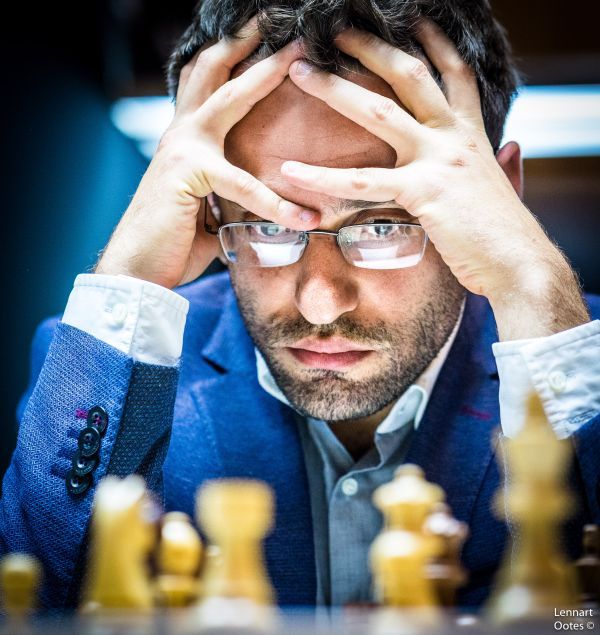 That’s how hard you got to concentrate when you play the Marshall.

Last round’s hero, Levon Aronian came up with a sharp response to answer Vachier-Lagrave’s 1. e4 – The Marshall Gambit. Although Aronian’s opening choice was very sharp, it is a thoroughly analyzed opening and at the highest level is considered to be drawish after the initial fireworks fade away. Also, MVL, playing with the white pieces, did not pose too many problems to his opponent with his responses and the game fizzled out into a draw. 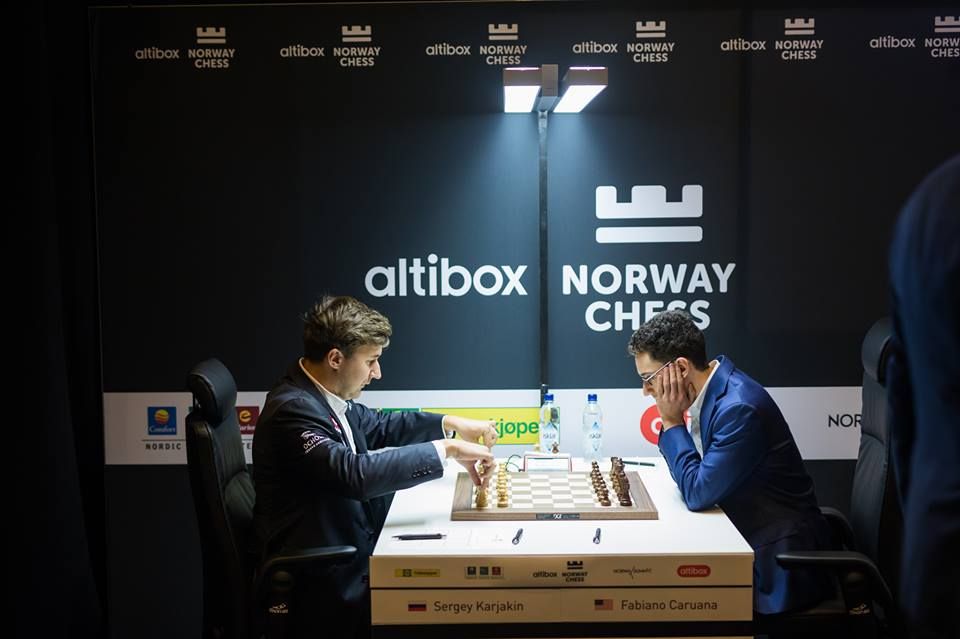 Karjakin and Caruana prepping up before the action began

Fabiano Caruana, playing against Sergey Karjakin tried the Petroff defense yet another time in this tournament. He had used it once already against Maxime Vachier-Lagrave in round three and saw no reason to not go for it again. When asked about his opening choice, Caruana said that although Petroff is not the most ambitious opening, it does put white under enormous pressure to prove anything. The game lasted five hours and the players fought until there were only kings remaining on the board.

With his draw, Nakamura has maintained his half point lead over his nearest rivals and stands at 3.5/5. Kramnik and Aronian are within striking distance with a score of 3.0/5. So, Caruana, Giri and Karjakin are in a four-way-tie for the third place and have scored 2.5/5. World Champion, Magnus Carlsen, along with MVL, has scored 2.0/5 and the two share the fourth place. Vishy Anand is at the bottom of the table with 1.5/5. Having passed the halfway stage, Anand will have to pull off a miracle to finish among the leaders. It will be especially difficult as he is yet to play some really tough opponents like Nakamura and Carlsen who have given him nightmares in the past.