What's wrong with these super grandmasters, you may ask! All five games ended in a draw in the third round of the Altibox Norway Chess 2017. Well, that's what usually happens when roughly matched players fight against each other and match one good move with a better one! Carlsen against Nakamura was surely the most interesting game of the round, but Karjakin and Vishy was not without its moments. The Russian had some new ideas in the Berlin and pushed Anand on the backfoot. But the Indian was up to the challenge and steered the game to a draw. Photos, analysis, videos and much more.

Round three at the world’s strongest tournament this year, the Altibox Norway Chess, looked like a seemingly uneventful affair at the outset as all of the games were drawn. But a closer look at the games unveils an entirely different picture. Vishy Anand, who sat down to play against Sergey Karjakin, chose the Berlin Defence to answer the Russian’s king’s pawn opening. Of course, playing the Berlin was Anand’s way of regaining composure. The opening is well known – or maybe, rather notorious – at the highest level because of the tepid positions it mostly leads to. But in his defense, he was playing with the black pieces, with which, it is difficult to press for a win at such elite level. And more importantly, having already lost a game in the previous round, being on the wrong end of a sharp tactical position would only have increased the damage. 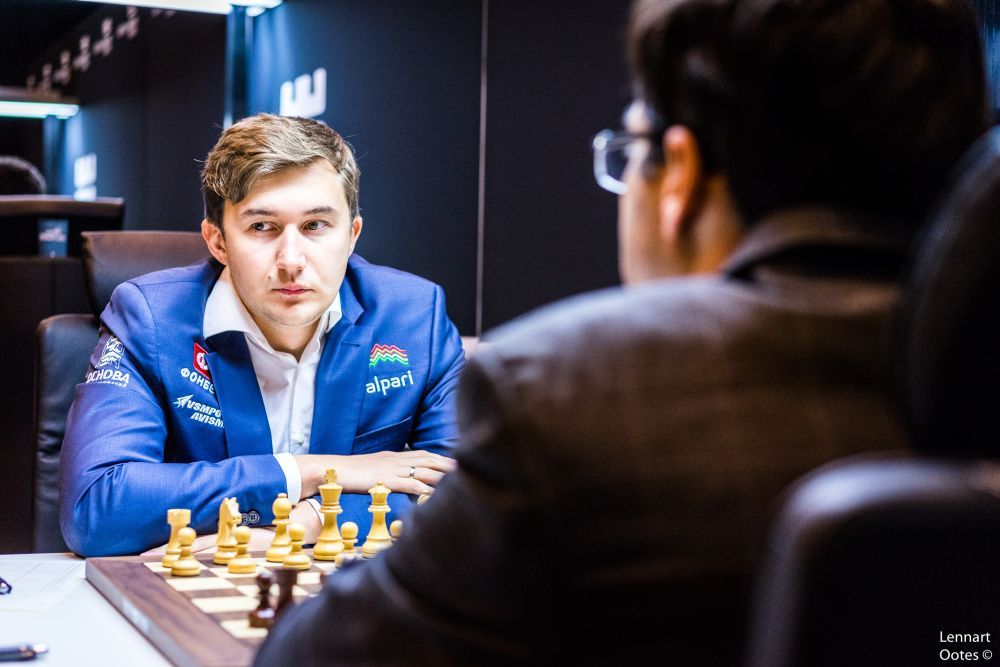 However, the sneaky Russian had laid landmines for Anand even in an opening which is considered more or less neutralizing. Sacrificing not one, but two pawns early in the game, Karjakin went for a line which required the Indian megastar to be dead-on in his choice of moves in order to avoid ending up in a worse position. As the game began, Karjakin blitzed out almost every move showing that this was home preparation.

Somehow, one of the official commentators of the event, GM Nigel Short, figured out that this line might have been a remnant of Karjakin’s preparation for his World Championship Match against Carlsen held in November last year. When he was asked about this in the post-game press conference, Karjakin confirmed that GM Short was right. Curiously enough, Anand was able to come up with the most accurate moves as he also had prepared the same line with his second Radoslaw Wojtaszek some years ago, but didn’t remember all the moves correctly.

The game lasted 33 moves and the players were out of the playing hall in less than two hours having split the point. After the game, Vishy seemed to be satisfied with the result but at the same time complimented his opponent for his strategy of trying out this sharp line. 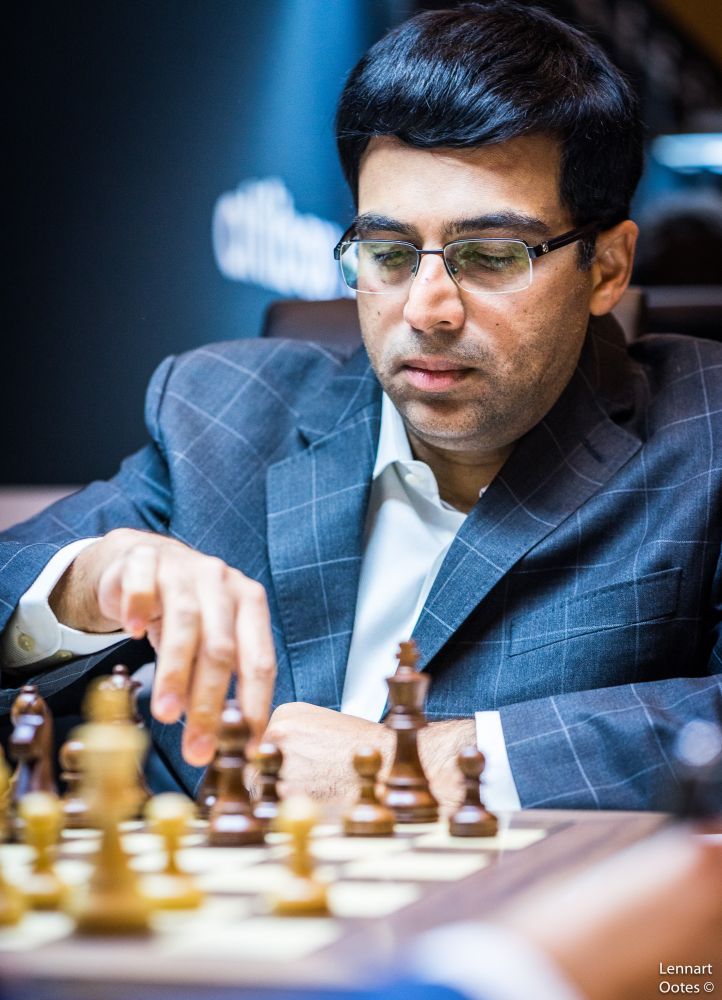 Vishy’s back was pushed to the wall, but he fought valiantly and held the draw (image courtesy: Lennart Ootes)

If facing the Berlin has always been an issue for you, then you could take a look at Shirov's 5.Re1 suggestion for White in this ChessBase DVD. It is a great way to play for just two results and Alexei's ideas are sure to give you an edge over your opponent.

Another interesting encounter was the one between the Russian veteran, Vladimir Kramnik and Wesley So. Kramnik, with his win against Anand in the last round, has moved up to the world number two spot in live ratings. And incidentally, So is the player whose rating he has surpassed to become the world number two! They played a long, tenacious game which lasted more than five hours in which Kramnik kept pressing with the white pieces for almost the entire game but Wesley never really let his position go out of hand.

Fabiano Caruana chose to kick off with the Petroff Defense against Maxim Vachier-Lagrave’s 1. e4. The two Grandmasters fought a 51-move-battle until there were only two kings left on the board. Compared to the other games of the round, this one was a bit dull.

Levon Aronian and Anish Giri fought a fierce duel which cropped out of a Queen’s Gambit Declined. On move 15, Giri, playing with the black pieces, made a covert draw offer by moving his queen back and forth. However, Aronian chose not to repeat moves and soon the game turned sharp as both players attacked their opponent’s king. By move 30, queens were exchanged and a few moves later Aronian found himself in horrible time trouble. At one point he had to make five moves in just nine seconds left on his clock with no increment.

Aronian, in this case had made 35 moves when he had 9 seconds remaining. Giri tried to put pressure on him but the Armenian turned out to be resourceful. And once he’d reached move 40, the worst was over for him and the players drew by repetition in 53 moves. 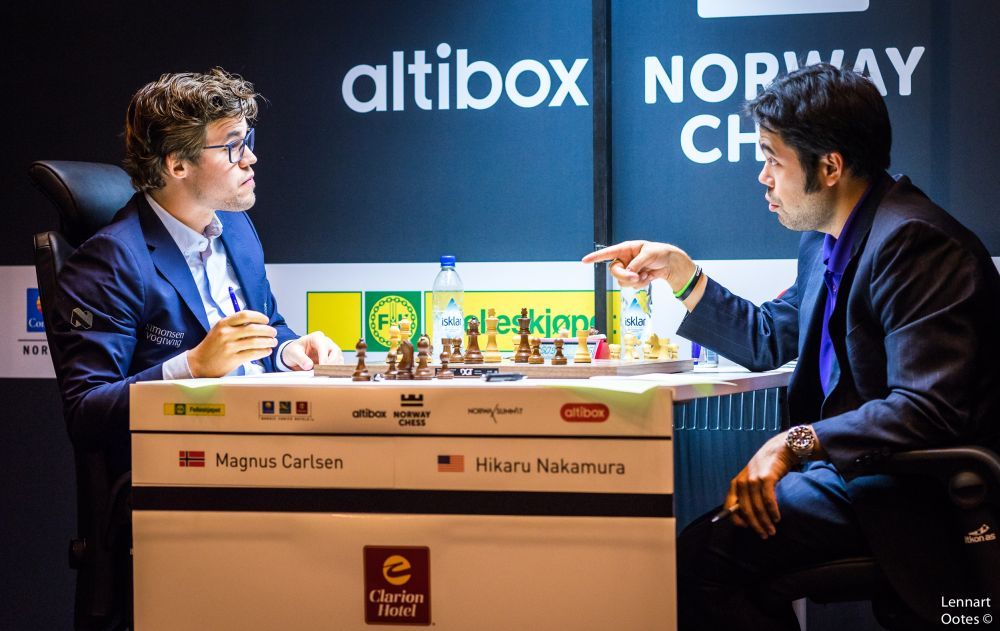 The game between Magnus Carlsen and Hikaru Nakamura was probably the sharpest and the most entertaining. Playing a modest fianchetto with the white pieces against Nakamura’s Sicilian Najdorf, Carlsen played 11. b3 to stop the black knight from reaching the active c4 square. Soon he gained space and pushed Nakamura on the defensive. It was only through active moves and accurate defence that Hikaru was able to hold the draw.

Tomorrow is a rest day in Stavanger. Round 4 will begin on June 10, 2017 at 7:30 PM IST. After the rest day, Anand will have the black pieces yet another time against Anish Giri who is at the bottom of the table along with Anand with a score of 1.0/3. Nakamura and Kramnik are still leading the tournament with 2.0/3 while six players are tied for the second place with a score of 1.5/3.