The strongest tournament of the year Altibox Norway Chess 2017 kicked off on Tuesday. Some call it like the Candidates, maybe even better, because we not only have the eight of the top ten players in the field, but also the World Champion is a part of the show. Out of the five games we had only one decisive result where Hikaru Nakamura defeated Anish Giri. Vishy Anand played the risky 3...c5 in Advance Caro Kann and drew the game without too many difficulties against MVL. We have detailed analysis of both these encounters.

Featuring eight out of the top ten players in the world, the Altibox Norway Chess is indeed a spectacle. Among the participants are big names such as the current World Champion, Magnus Carlsen; his former challenger Sergey Karjakin; and world no. 2, Wesley So, who is considered by many to be the biggest threat to Carlsen. The only Indian at the event is our beloved Grandmaster, Viswanathan Anand. The tournament is a 10-player round robin event and is being held in the Norwegian city of Stavanger.

Round one began with some exciting match-ups. The tiger from Madras, Vishy Anand, was playing against the French number one, Maxime Vachier-Lagrave; World Champion, Magnus Carlsen was paired his arch-rival, Wesley So; Vladimir Kramnik was pitted against his countryman Sergey Karjakin; Lev Aronian was to cross swords with Fabiano Caruana; while Hikaru Nakamura was to play the Dutch number one, Anish Giri. Also, to add thrill to the encounters, Sofia rule has been applied. This means that the players are not allowed to talk to one another during the rounds and therefore could not offer draws at any point during the game.

But despite all the efforts of the organisers to limit the number of draws in the event, four out of the five games were drawn in the first round. Vishy Anand kicked off his game with an off-beat line of the Caro-Kann defense moving his queen-bishop pawn twice, on moves 1 and 3. The Frenchman, however, did not hesitate to drift the game into a slightly double edged middle-game where he gave himself a weak pawn on c3 in order to gain activity. After the game Maxime said that he felt he was better throughout the game but wasn’t able to prove it. And although the game looked placid on the outset, a lot of complications loomed around in the background which the players chose to side-step. Anand seemed comfortable and was never in any big trouble during the 44-move-long battle. (image courtesy: official website)

This is a good result for Anand considering how effortlessly he was able to hold someone like Vachier Lagrave to a draw with the black pieces. It would be interesting to see how Anand fares with the white pieces in the next round. Given his choice of a slightly unorthodox opening with the black pieces, it is possible that he might uncork something even more surprising when he has white. 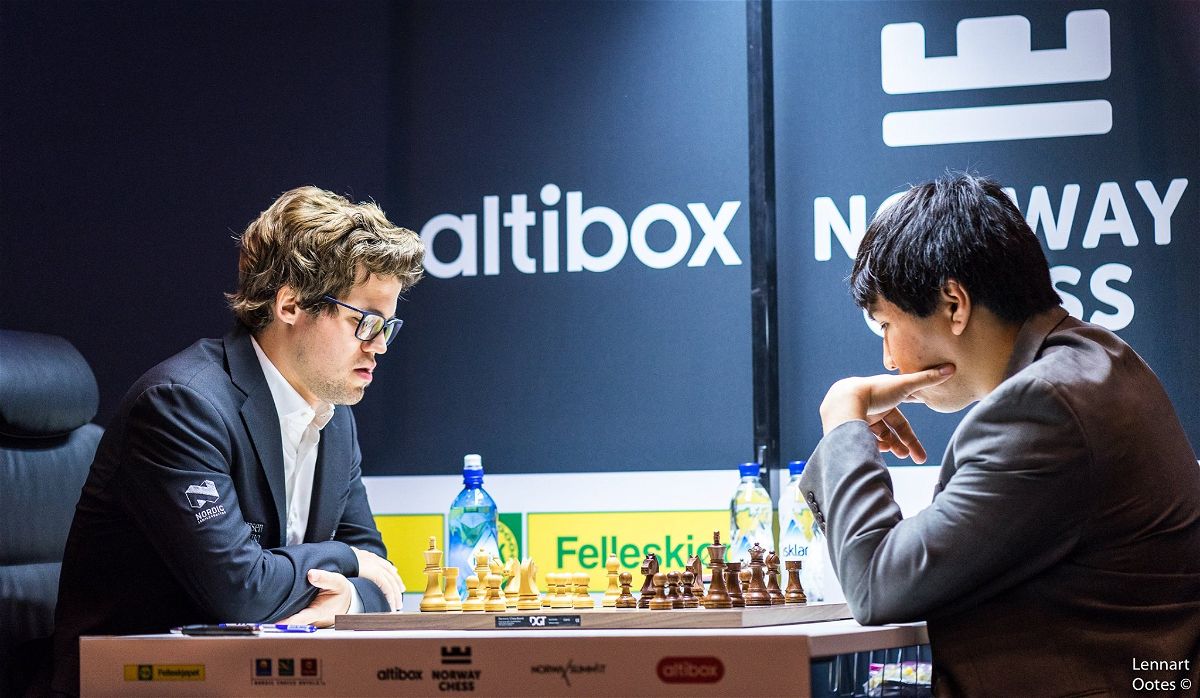 Among the other games of the round, probably the one which attracted most of the attention at the start was the game between Magnus Carlsen and Wesley So. (image courtesy: Lennart Ootes)

Wesley has shown an astounding form in the one year and to rise to the world number two spot.  Many chess experts think that he can be the biggest threat to Carlsen given the prodigious quality of his game. But Magnus too showed that he is up for a fight. The organisers of Altibox had organized a blitz tournament before the main event began in order to allot numbers to players for the drawing of lots. The winner of the blitz tournament got to pick the number of his choice while the subsequently ranked players got the highest available number.

Magnus not only won the blitz tournament by beating Wesley in the last round but also chose the number that would pair him against Wesley in the inaugural round of the main event. But when the round began he chose the modest Italian opening which didn’t offer him much advantage. The game soon fizzled into a draw. The same opening as well as the same result was seen in the all-Russian clash between Vladimir Kramnik and Sergey Karjakin.

The Armenian superstar, Levon Aronian felt he had an edge throughout his game against Fabiano Caruana but wasn’t really able to convert it into a full point and had to settle with a draw. 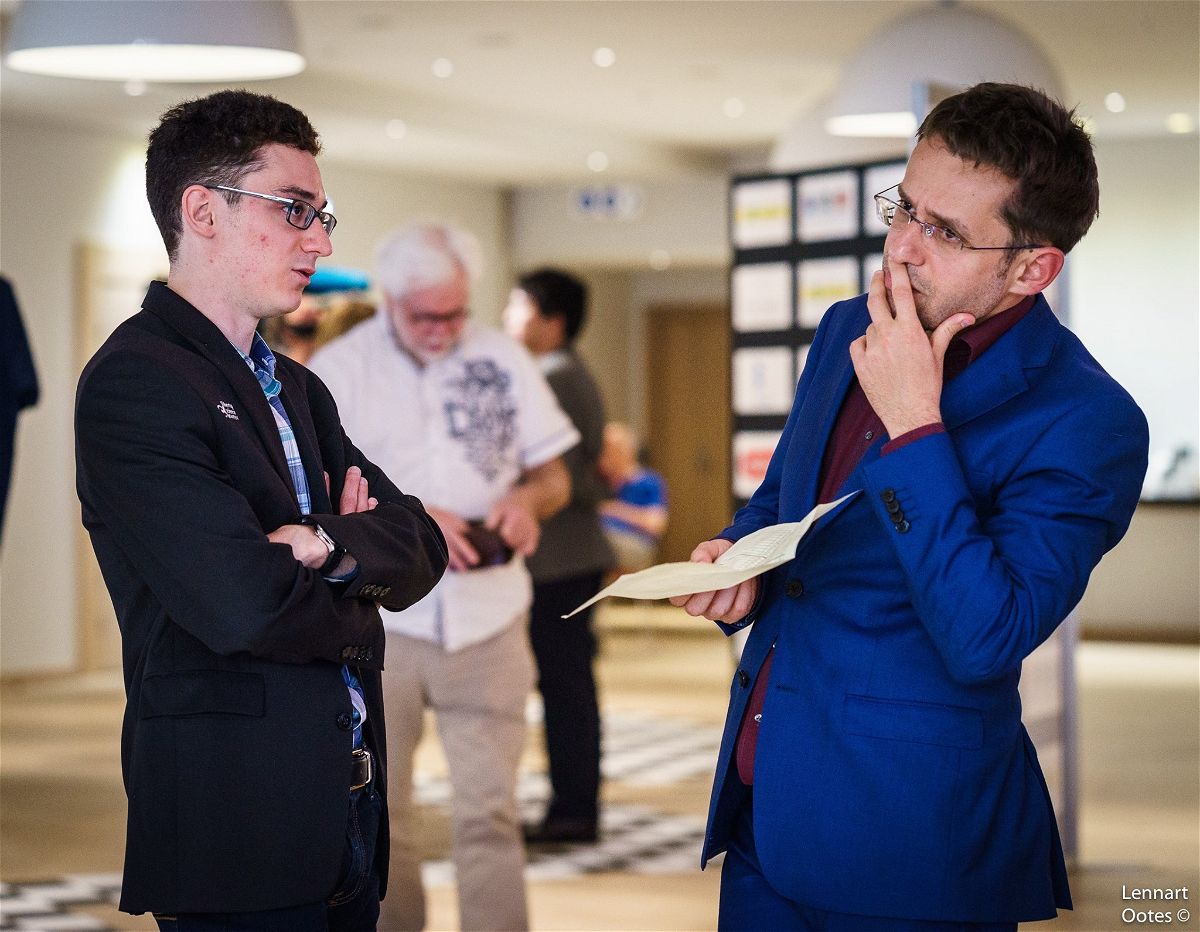 Even after the game, Aronian was going through his score-sheet trying to find what he had missed. (image courtesy: Lennart Ootes)

The game between Hikaru Nakamura and Anish Giri was the only decisive game of the round. Anish chose to answer Hikaru’s 1. d4 with a relative sideline of the Grunfeld defence. Giri also sacrificed a pawn and had to liquidate into a slightly worse endgame to recover his pawn. However, his crucial mistake came on move 45 when Giri, with the black pieces played 45… Ke7. The rest was then a technical task which Naka accomplished successfully. 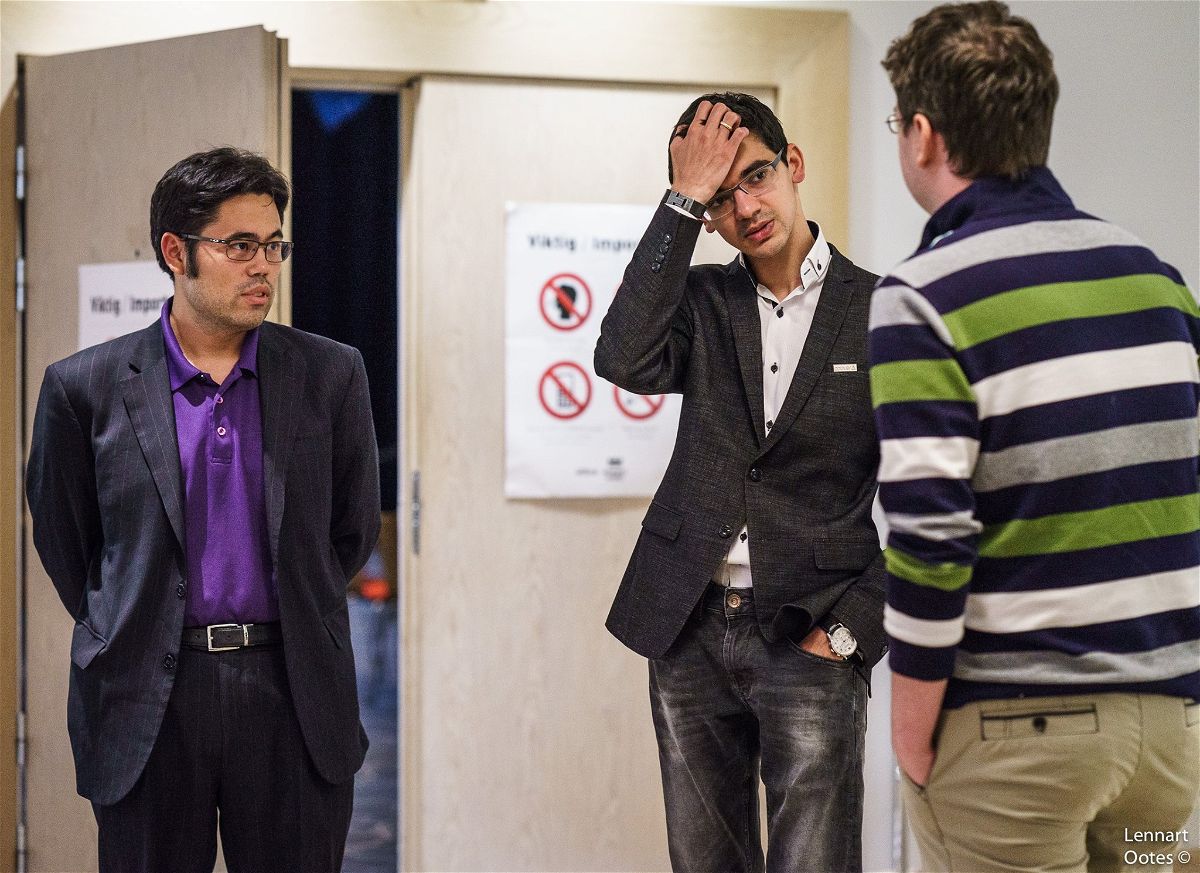 The only decisive game of the round. Anish speaks to Erwin l’Ami as Nakamura looks on. (image courtesy: Lennart Ootes)

With his win in the very first round, Hikaru Nakamura has emerged as the sole leader after round 1. He is followed by 8 players including Vishy Anand who are tied at 0.5/1 while Anish Giri, with his loss, is at the bottom of the table. There are, however, eight more rounds to go and given the closely matched field, battles can be expected to be grueling.

Daniel King analyzes round one highlights