What a scintillating start to the 2015 National Men’s Premier! We saw it all: an example of near perfect preparation, missed chances and even a loss on time! Sethu beat Murali Karthikeyan after the latter missed his chance to equalize; Vidit destroyed Praneeth in a well-prepared line. Venkatesh shot himself on the foot, Kunte defended well but strangely donated a pawn to Shyam Sundar, while Shyaamnikhil committed suicide against Rathnakaran, losing on time in a better position.

The bustling Tamil Nadu town of Thiruvarur witnessed some chess action of a high caliber, with all the players fighting it out no holds barred. The Round Robin brings together some of the best players in India.

Sethu beat Murali Karthikeyan after the latter missed his chance to equalize; Vidit destroyed Praneeth in a well-prepared line. Venkatesh shot himself on the foot, Kunte was unable to hold his position against Shyam Sundar, while Shyaamnikhil committed suicide against Rathnakaran, losing on time in a better position. 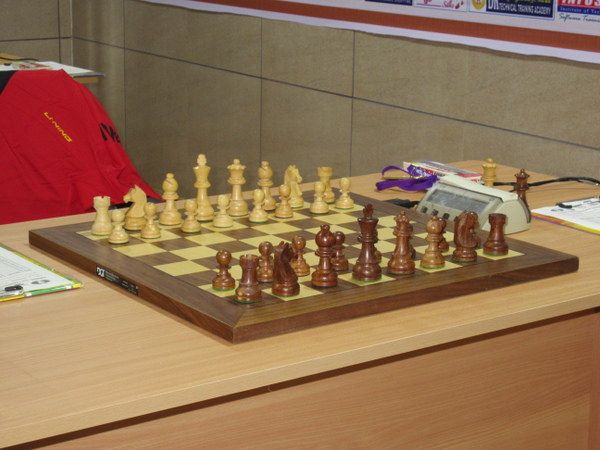 Calm before the storm

The first game to finish was a brilliant display of preparation exhibited by GM Vidit Gujrathi. In a Caro-Kann Advance variation, the players followed a MVL-Ding Liren game from the Wijk aan Zee tournament earlier this year. While Praneeth admitted to have seen the game months back, he could not nail the precise details, going wrong with 17.Qh3?, when Vidit swooped in and picked up his point. 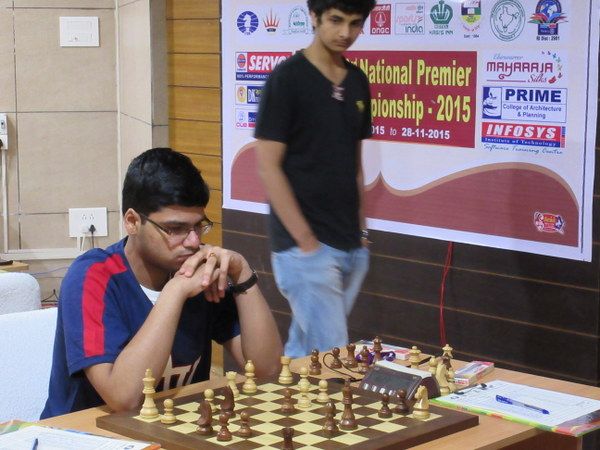 FM Praneeth Surya was unable to handle Vidit's class of preparation, failing to pose problems at all 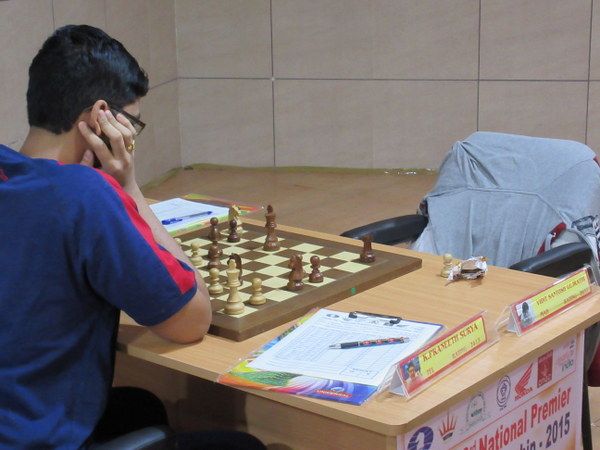 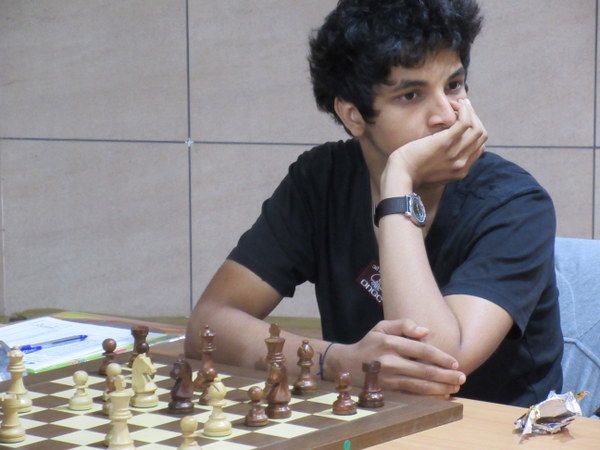 PB: You were playing the last seed of the tournament. Going into this line, what were your expectations?

Vidit: He did not know the theory well and the position was really complicated. At one point, he thought for about fifty minutes and played 17.Qh3, which is a mistake. However, the position was too complex to see everything over the board. After 17...h5, everything is forced and his pieces get stuck.

PB: You must have seen the MVL-Ding Liren game?

Vidit: Yeah, it was played in Wijk aan Zee this year.

PB: What would have happened had he entered 17.Bxg5?

PB: He had actually seen that game too, a while back.

Vidit: He played the Nd5, g4 stuff pretty quickly. I thought this may become a preparation vs. preparation fight. I think, he forgot the details -- there are a lot of small points to remember in the position, as regards to placing the pieces. It is very easy to forget.

PB: There was nothing critical to do after all that?

Vidit: No, I just had to make sure not to blunder.

PB: Tomorrow you are playing...

Vidit: Actually, we have played each other a lot since 2006. Every time, I've had black pieces, and tomorrow I will be White. Our games are always crazy! 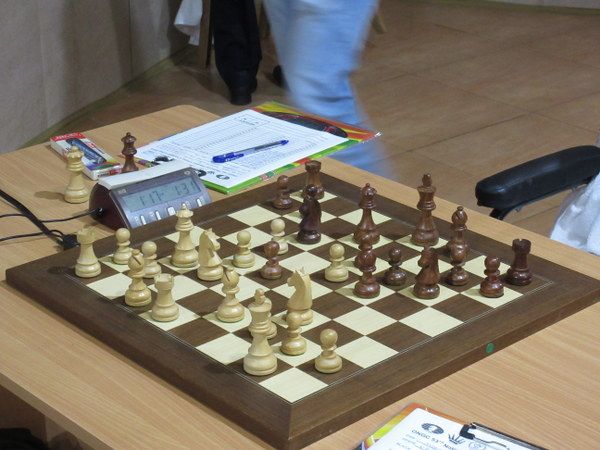 Two games finished almost at the same time. First, GM Neelotpal Das and IM Arghyadip Das settled for a draw in their theoretical debate in the Slav. 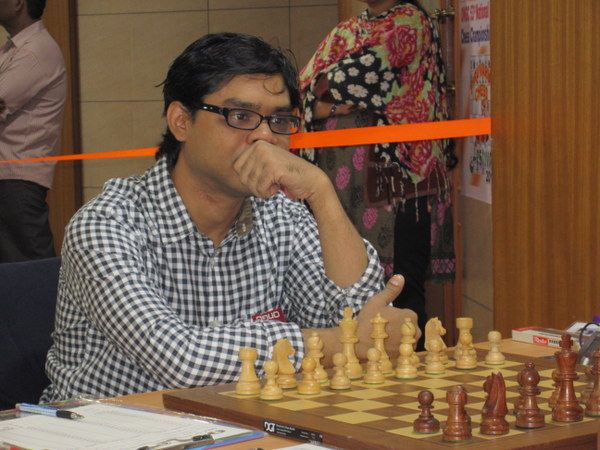 GM Neelotpal Das did not pose much problems to... 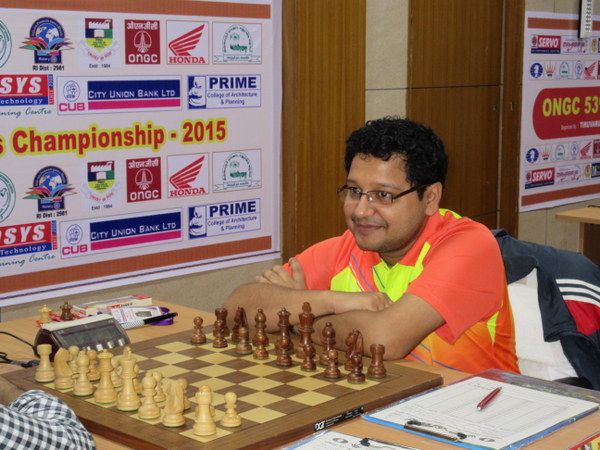 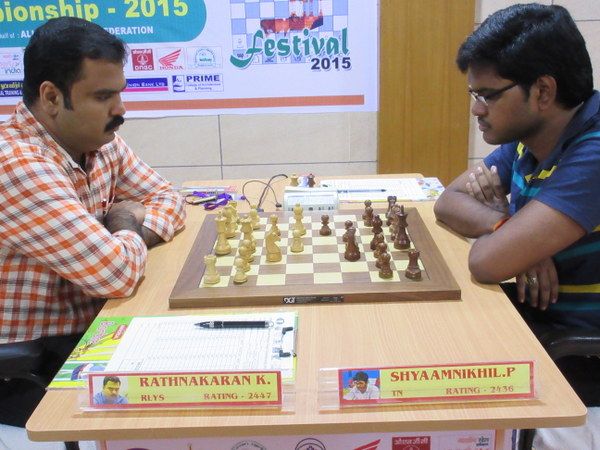 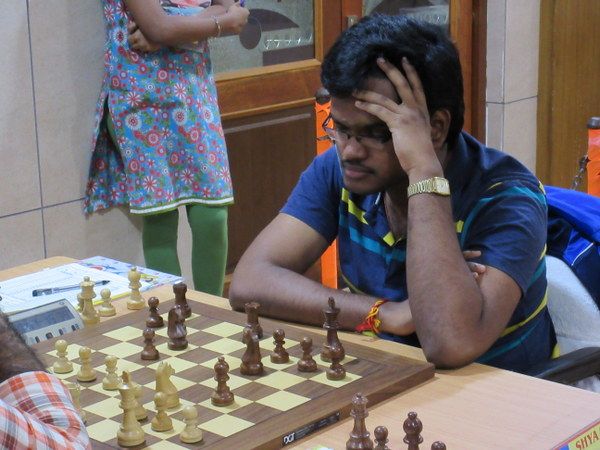 Next, IM Shyaamnikhil overstepped the time limit in a better position against IM K. Rathnakaran 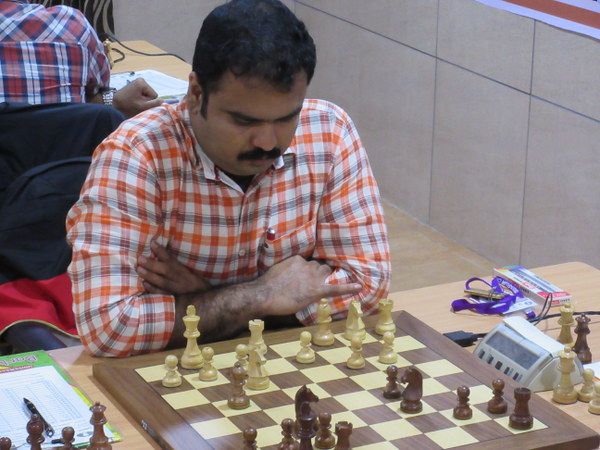 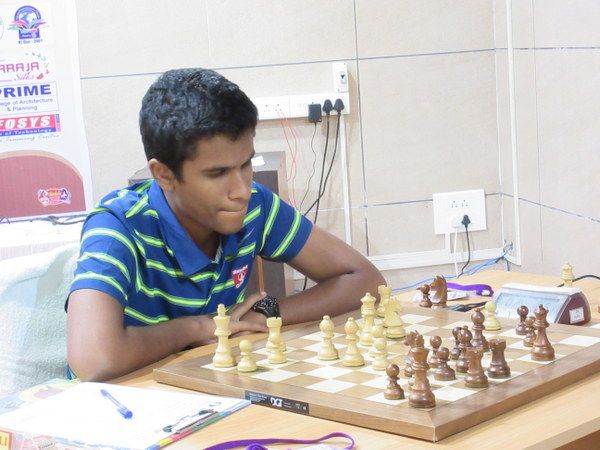 M. Karthikeyan had a rough start to the tournament, going down in flames against the defending champion. 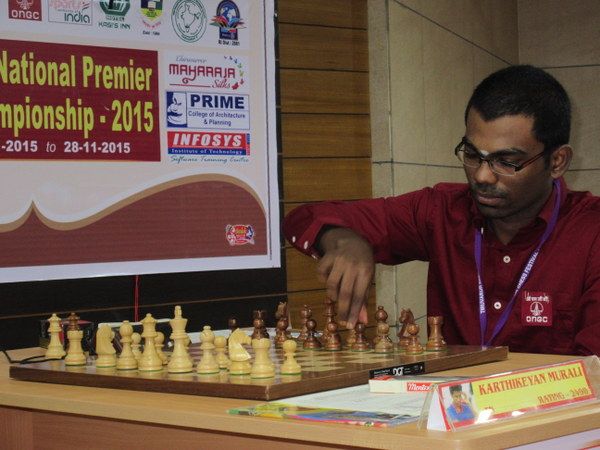 One of the brightest Indian talents, GM Murali Karthikeyan lashed out prematurely against defending champion GM S.P. Sethuraman, only to suffer from self-inflicted time-trouble. That said, Karthikeyan had his chance to equalize towards the end.

PB: You were playing one of the most talented players of this country. What was your expectation from the opening?

Sethu: I was expecting him to play this line. It has been played by Negi a few times, so I was well prepared. He used up a lot of time in the opening -- almost a difference of half an hour. The position was solid for me, and then he started going g4-g5...

PB: Do you think that plan was bad since you had a bishop on c6 already.

Sethu: Yes, I think so. I always had control of the position, but later, in time-trouble it became a bit complicated, but he missed some moves. He allowed ..Nd7-- and in return he got some play but I didn't see any attack from him.

PB: The usual idea is to break with e5?

Sethu: Yes, but he went f5, which I thought was dubious. Maybe, he could just plant Bf3 and slowly try for g4, without playing f5.

PB: Anything critical in the position after that?

Sethu: In time-trouble, he missed 29.Rf6, a tactical shot, which should hold -- he just has to find some precise moves.

PB: Were you afraid when you noticed that possibility?

Sethu: He was low on time. I thought he would miss it!

PB: Tomorrow you are playing...

Sethu: Neelotpal. I have a good score against him. Let's hope for a good day tomorrow. 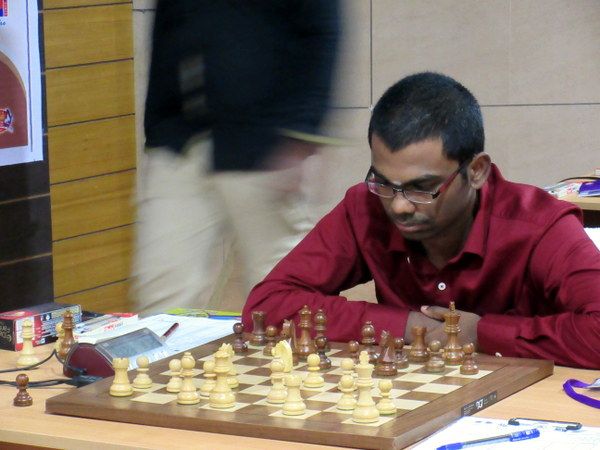 Will  Sethu do an encore? 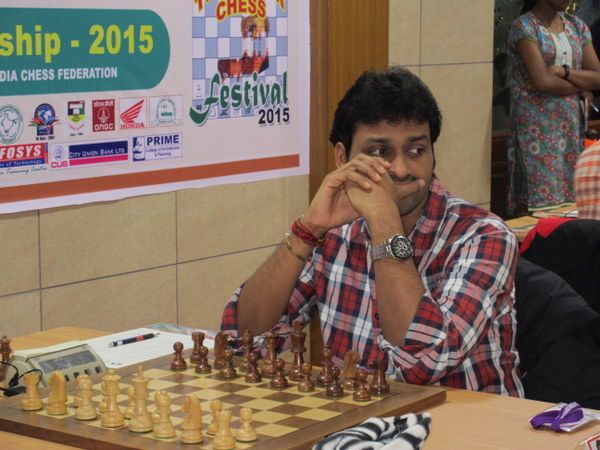 GM M.R. Venkatesh decided to compromise on his development and was penalized instantaneously by... 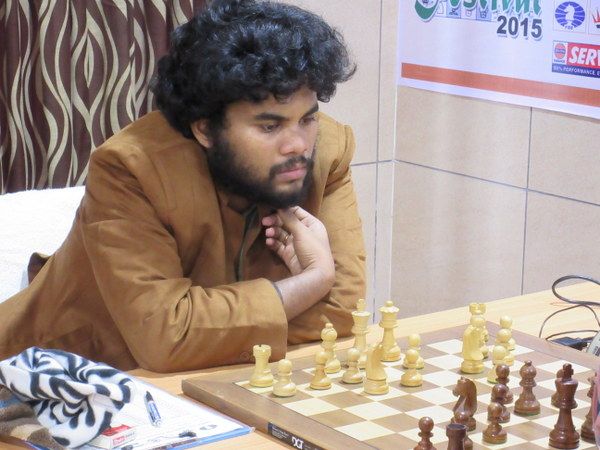 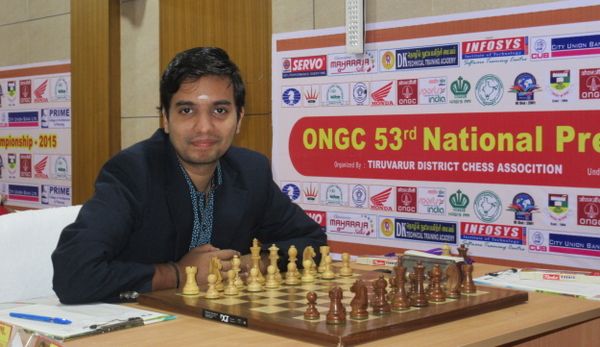 GM Shyam Sundar M. had a winning start to his campaign 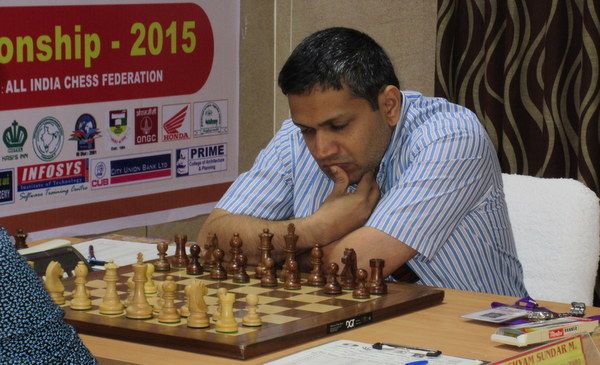 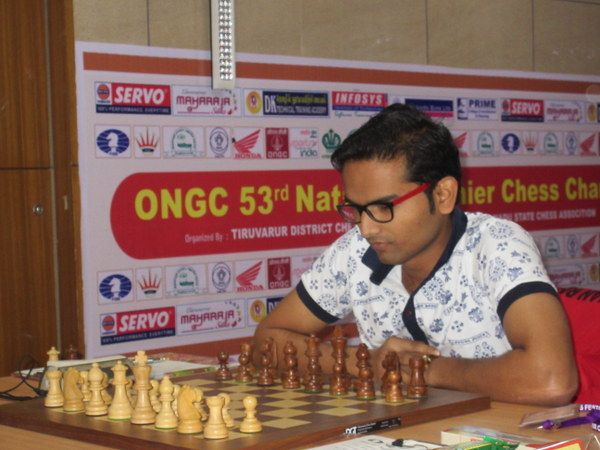 Newly minted grandmaster Swapnil Dhopade drew his game against Deep Sengupta. Donning the black pieces, Swapnil did have a slight pressure through the game, but he passed over his opportunity to pose problems on the queenside. 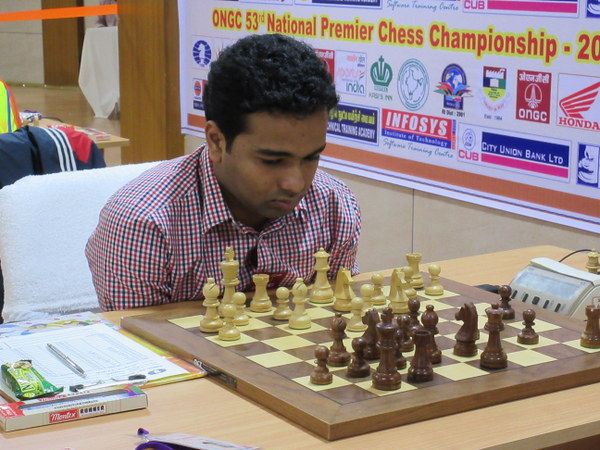 Crosstable after Round one