The fourth edition of the Maharashtra Chess League (MCL), the only professional league of India, is being held from June 11 -15, 2016 at the PYC Hindu Gymkhana, Pune. The six-team event with six players a side will be a rapid tournament (25mins + 10 sec increment) where the teams initially play a round-robin followed by a knockout between four teams to decide the winners. Vibrant, unsaturated and youthful, Pune is the future of Maharashtra, and the chess circle here is already booming. An illustrated introduction to the MCL 2016.

As the taxi entered the city of Pune, I could not help but notice the sheer number of property developers who have set shop in this bustling young city. Young, because it is still developing and far from reaching its zenith, and also the number of youngsters per square kilometer is noticeably high. Pune is also known as an IT city, due to the up and coming IT companies. Vibrant, unsaturated and youthful, Pune is the future of Maharashtra. 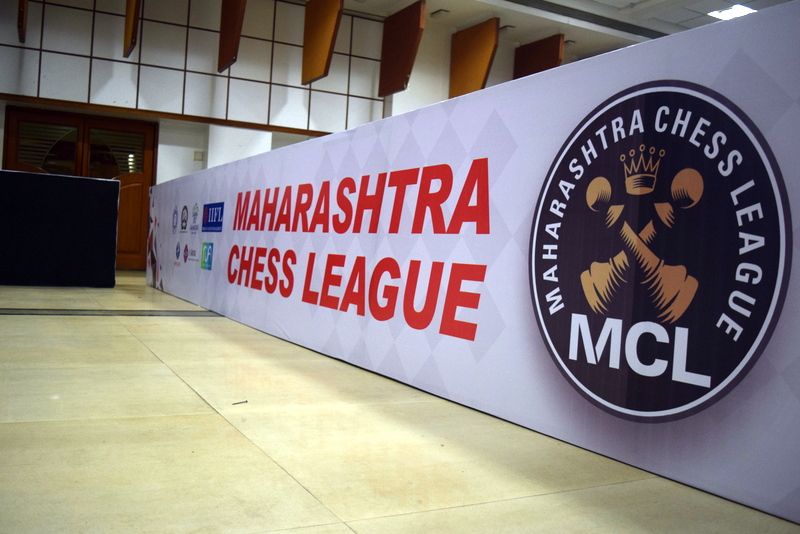 After a tiring  four-hour taxi ride from Mumbai, I reached the PYC Hindu Gymkhana, the host and the venue of the Maharashtra Chess League 2016, at approximately 19:30. The playing arena was situated on the ground floor. The preparations were in full swing inside. 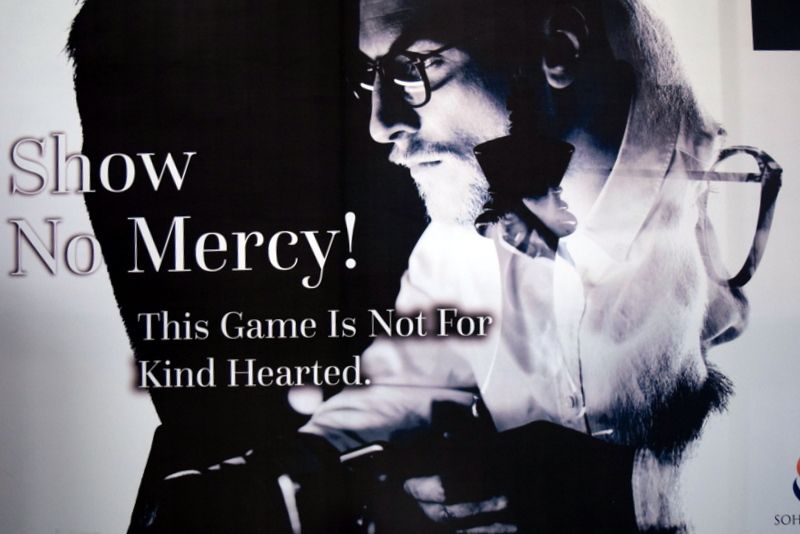 Amidst all the preparations, this particular hoarding caught my eye. Chess is not for the kind hearted, says the old French adage, and MCL 2016, into its fourth edition, agrees with experience.

GM Abhijit Kunte, the de-facto man behind the League's beautiful concept, was overseeing the preparatory work being conducted. I walked up to him, tired, and was lamenting how I should come in the morning to take the pictures after the boards and the arena is ready when he playfully quipped 'When was the last time chess players saw such a unique playing hall? You are a reporter, you should show the people how it looks like before it is ready to take off!'

Convinced, I set about capturing the following impressions: 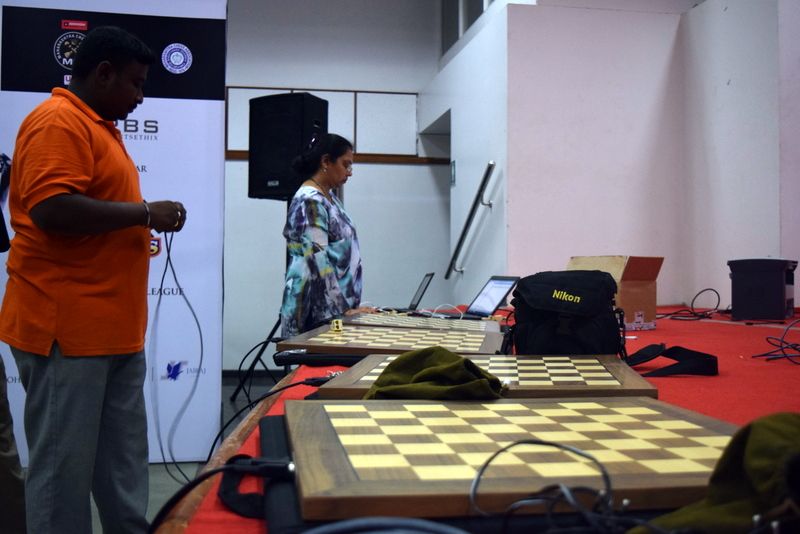 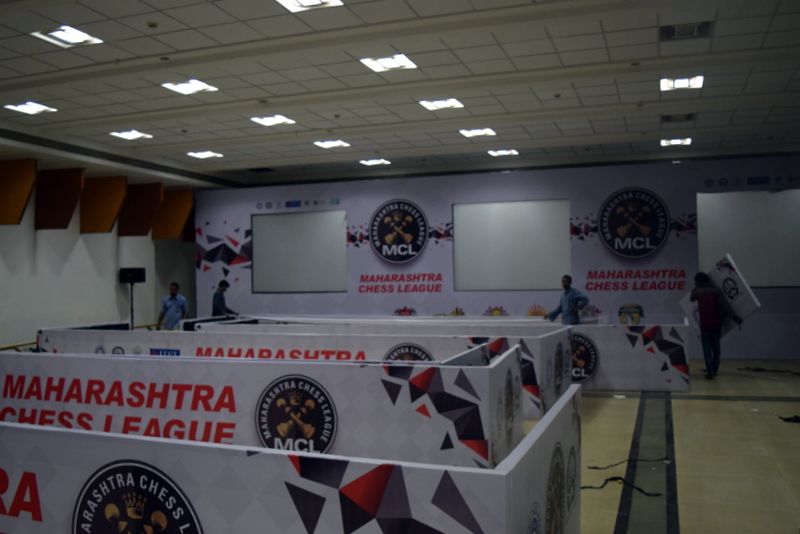 The playing arena is divided like a tennis stadium — each court hosting a match between two teams. 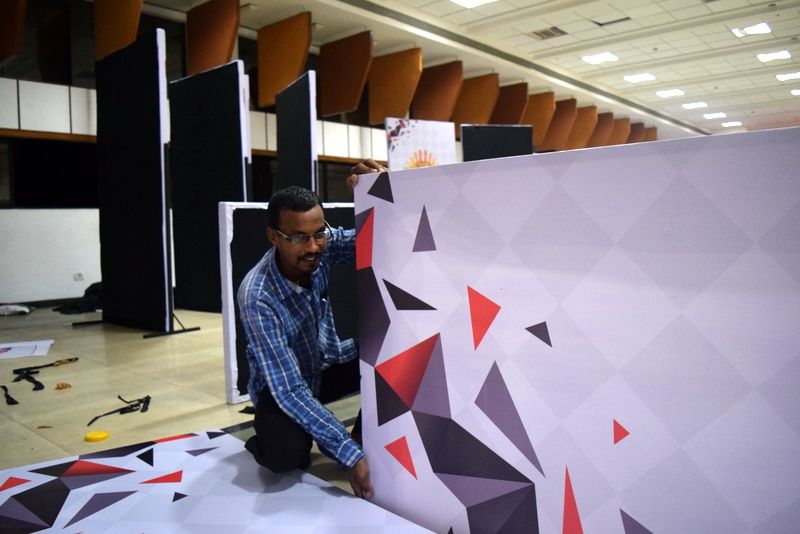 Men at work to put together the 'courts'in place for the games. 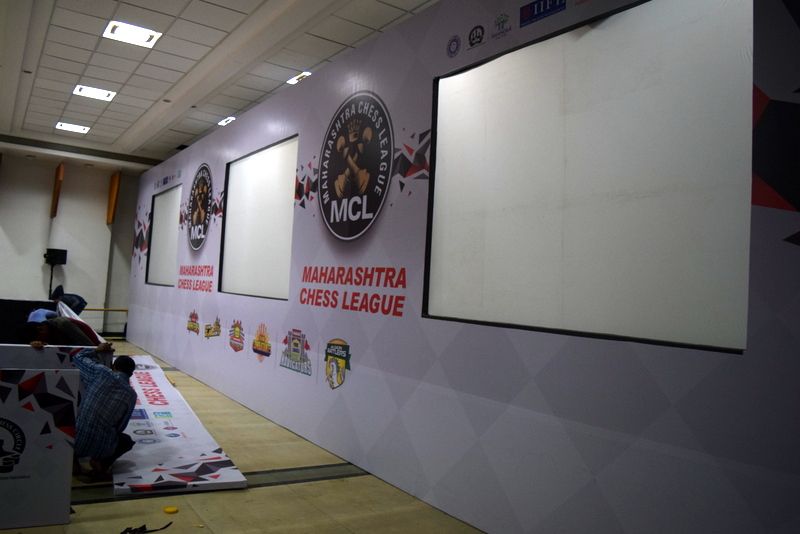 The rectangle boxes in the far end are for the screens broadcasting the games live for the spectators. 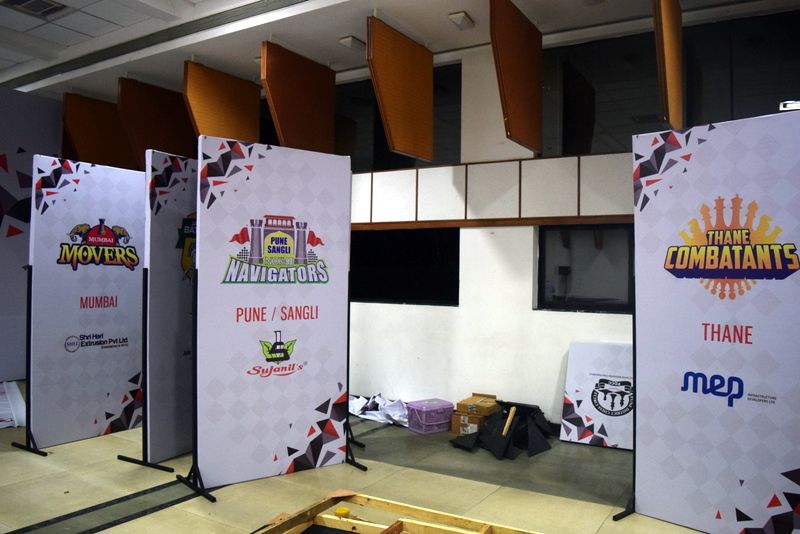 Each team is in contention to win the 'Best Dugout Prize' and this places a significant emphasis on the design of the hoardings. 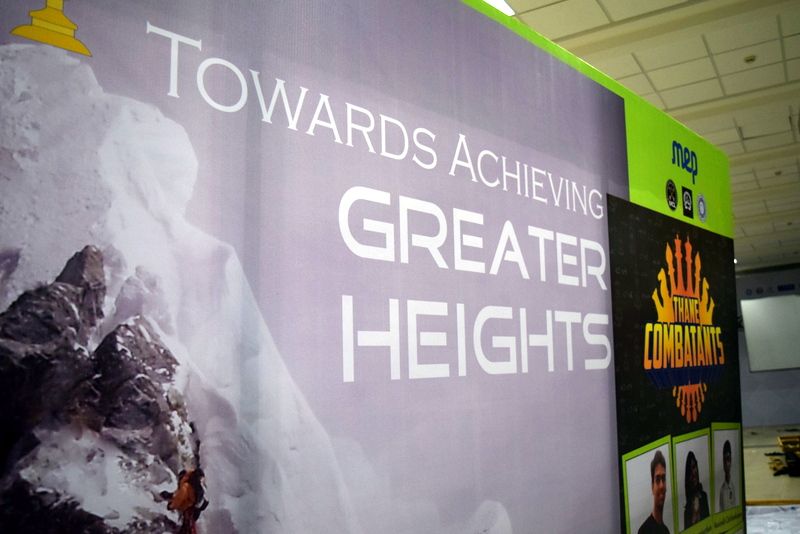 Here is the one belonging to Thane Combatants. 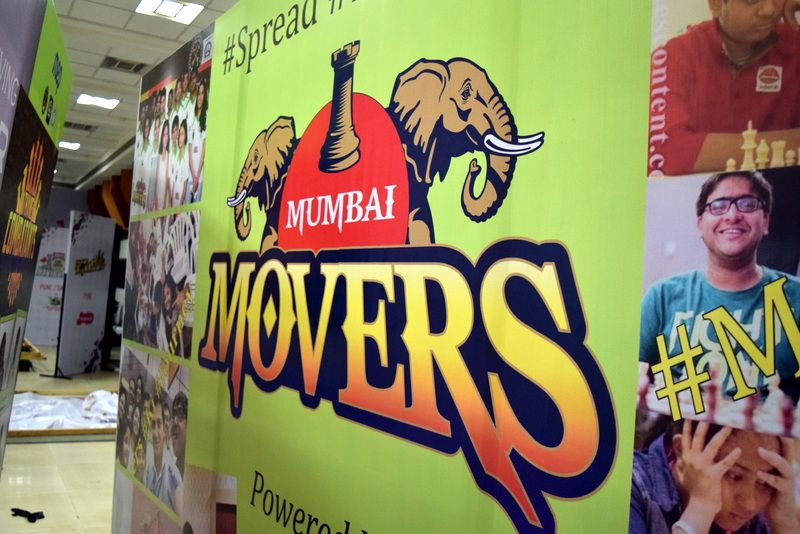 And this one by Mumbai Movers. 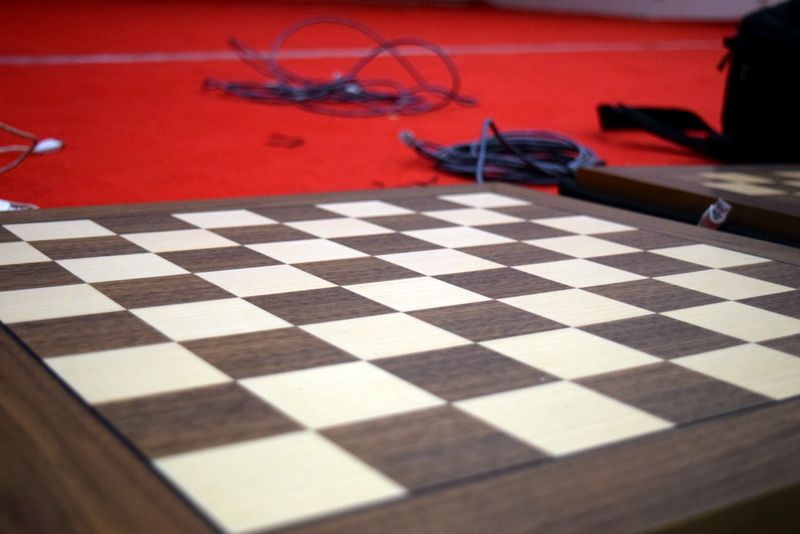 In a refreshing change from the previous editions, the season four will witness all games being fought on the classy DGT boards. 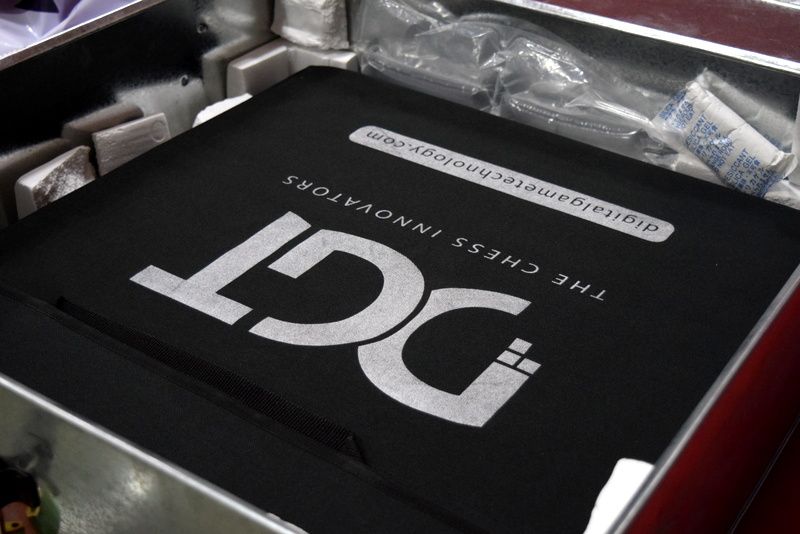 All set to go! 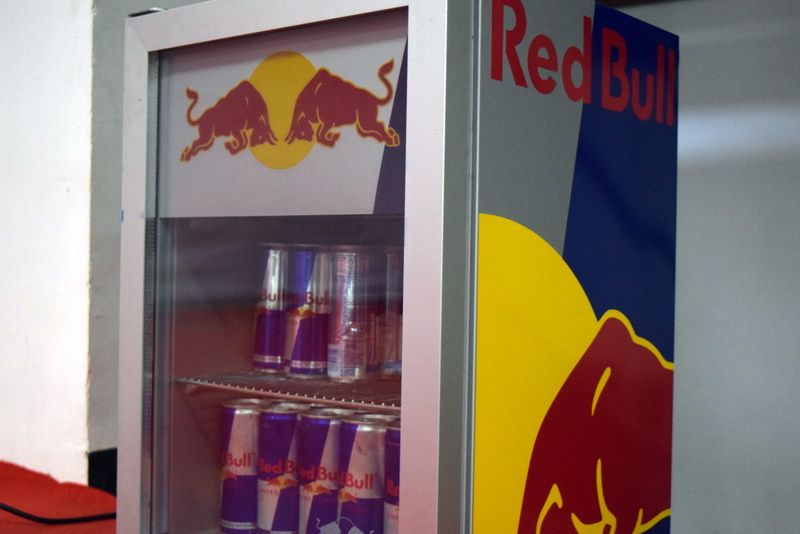 Red Bull drinks for one and all, even while the works were in progress. 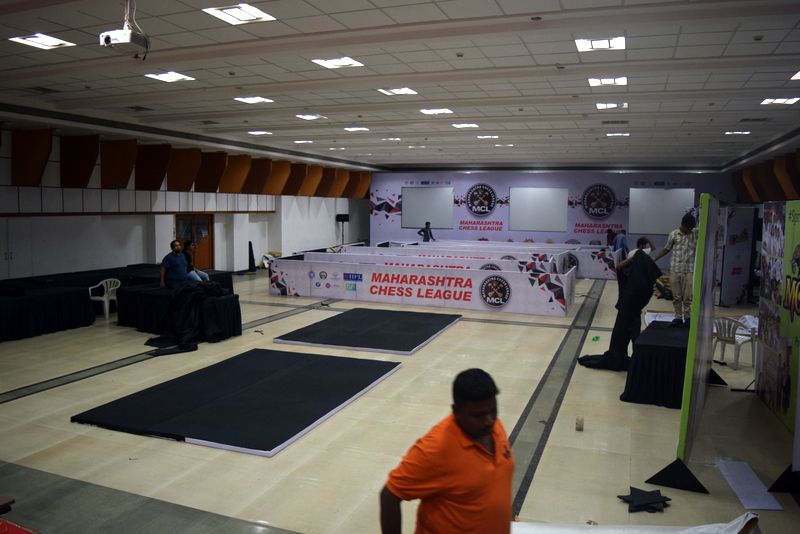 And so, this is how the tournament arena looks like, while still inside the pupa. When the games begin, the butterfly will fly out in all its glory. Wait for it!

You can read the detailed introduction to the teams and the players in the team in this report by V. Saravanan.

It must be noted that every team must field at least three players from Maharashtra in each round, including two women players, is compulsory. There are no general board orders for teams during the event! This means that players with equal strengths will rarely play each other in every round. 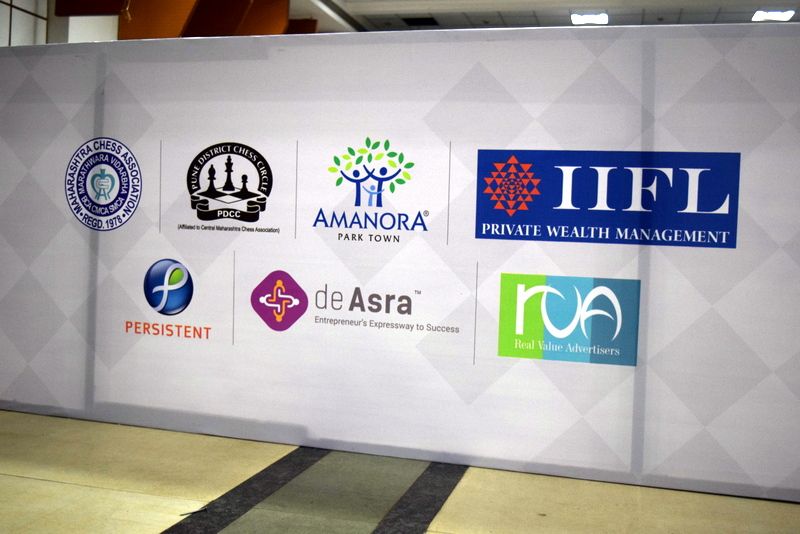 The fourth edition of the Maharashtra Chess League (MCL), the only professional league of India, is being held from June 11 -15, 2016 at the PYC Hindu Gymkhana, Pune. The six-team event with six players a side will be a rapid tournament (25mins + 10 sec increment) where the teams initially play a round-robin followed by a knockout between four teams to decide the winners.

The title sponsor of the event is the Persistent Systems, a technology services company with a revenue of US $ 308 Million in 2014-15, and supported by de Asra Foundation, an entrepreneurship consultancy company, with the support of Amanora Knowledge Foundation, Pune, and IIFL Private Wealth Management. The tournament also has the Bank of Maharashtra and Indian Oil as Associate Sponsors. 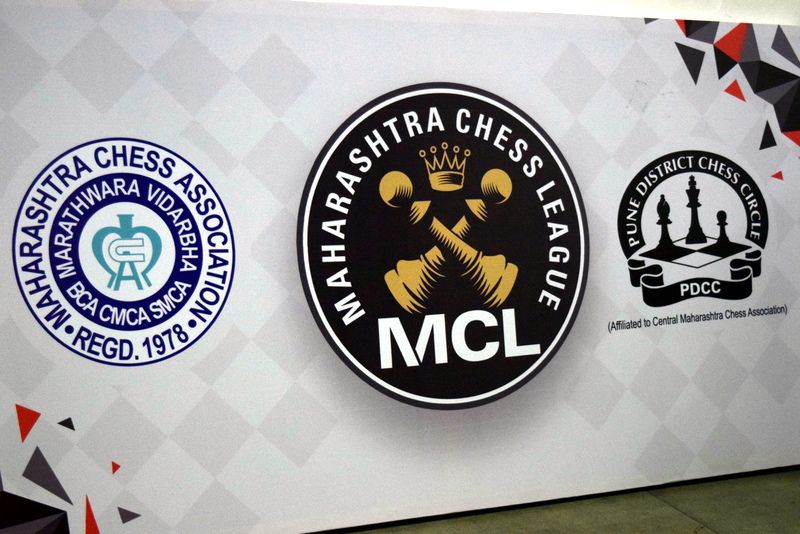 The tournament is a brainchild of Pune's very own GM Abhijit Kunte and Aniruddha Deshpande, President of the Pune District Chess Circle.

ChessBase India will be covering the event extensively with daily reports and updates.