Vishy Anand pays his second Grzegorz Gajewski well. How do we know that? Because after reeling out one novelty after another in this tournament, Vishy was asked this question by Maurice Ashley. And why shouldn't he. Thanks to these novelties he is able to take his opponent's in uncharted territory and beat them convincingly. This is what he did to Veselin Topalov. Wesley So drew his game and won the Grand Chess Tour 2016. Pictures and analysis from the penultimate round. 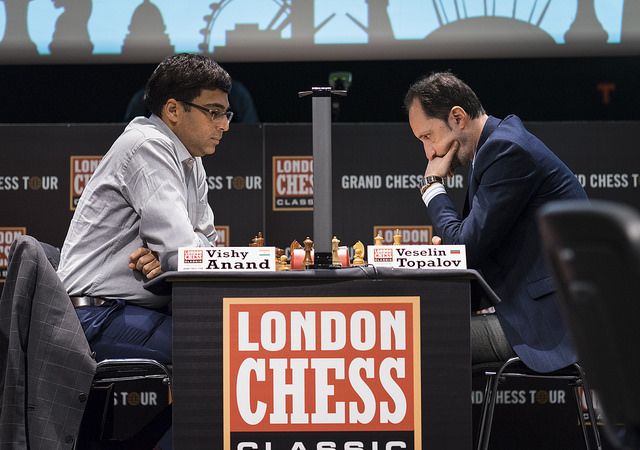 Veselin Topalov is six years younger to Vishy Anand but has clearly lost the drive and motivation to work hard at chess. His dismal result at the London Chess Classic 1.0/8 is definitely the result of his lack of hard work. While Topalov's farmlands are withering away, Vishy Anand's pastures are flourishing like never before.

After his fantastic 10...Bxa3 novelty against Wesley So, Vishy Anand showed the world that he had more tricks under his sleeve by revealing another very interesting novelty on the twelfth move against Veselin Topalov. 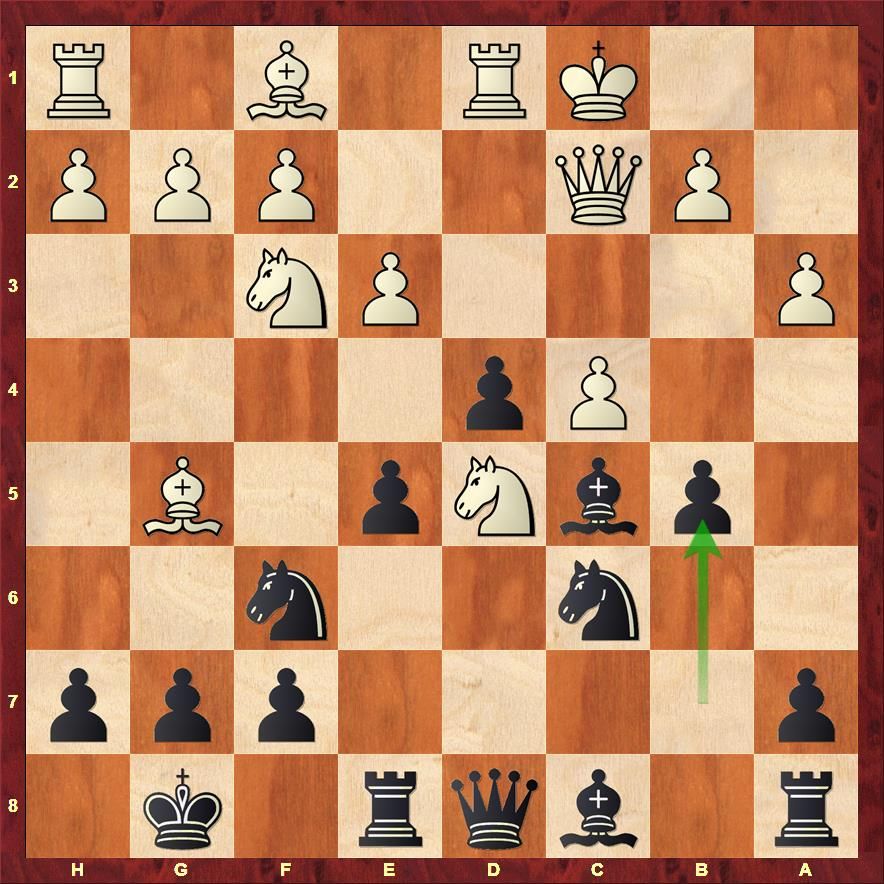 12...b5 had never been played before and this was the idea of Grzegroz Gajewski, Anand's second 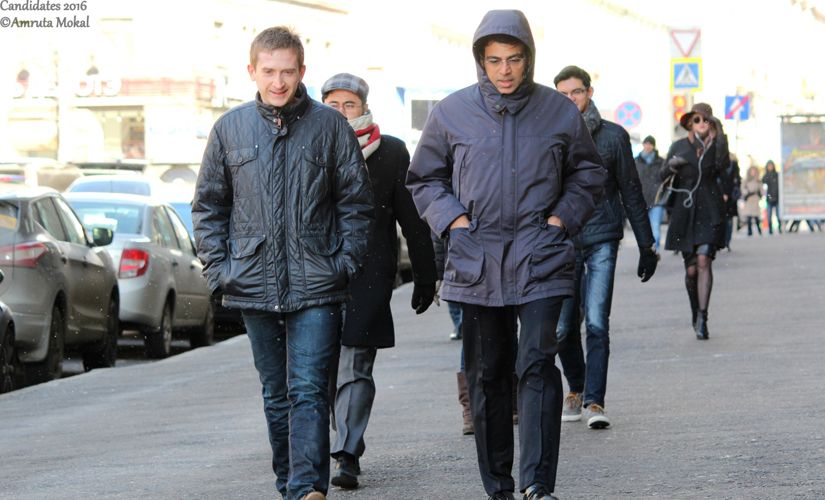 The man who makes such novelties possible Grzegorz Gajewski, walks with Vishy Anand during the Candidates in Moscow 2016 (picture by Amruta Mokal)

When commentator Maurice Ashley asked Anand whether he paid Gajewski well, Anand jokingly put a finger on his lip as if asking Maurice to not ask such personal questions and with a smile said, “Yes, I do pay him well.” 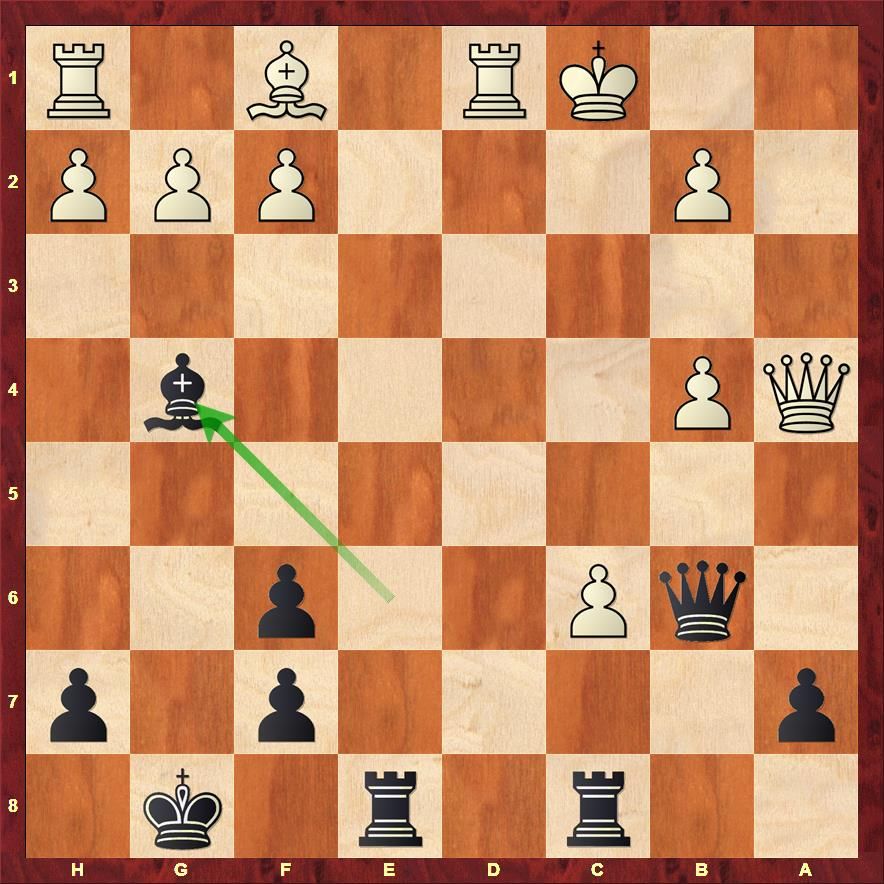 After the opening Vishy could have won the game with ...Bg4. The idea is that f3 is met with ...Bf5 when Bd3 is impossible because of Qe3+. That's the point of Bg4 provoking f3. 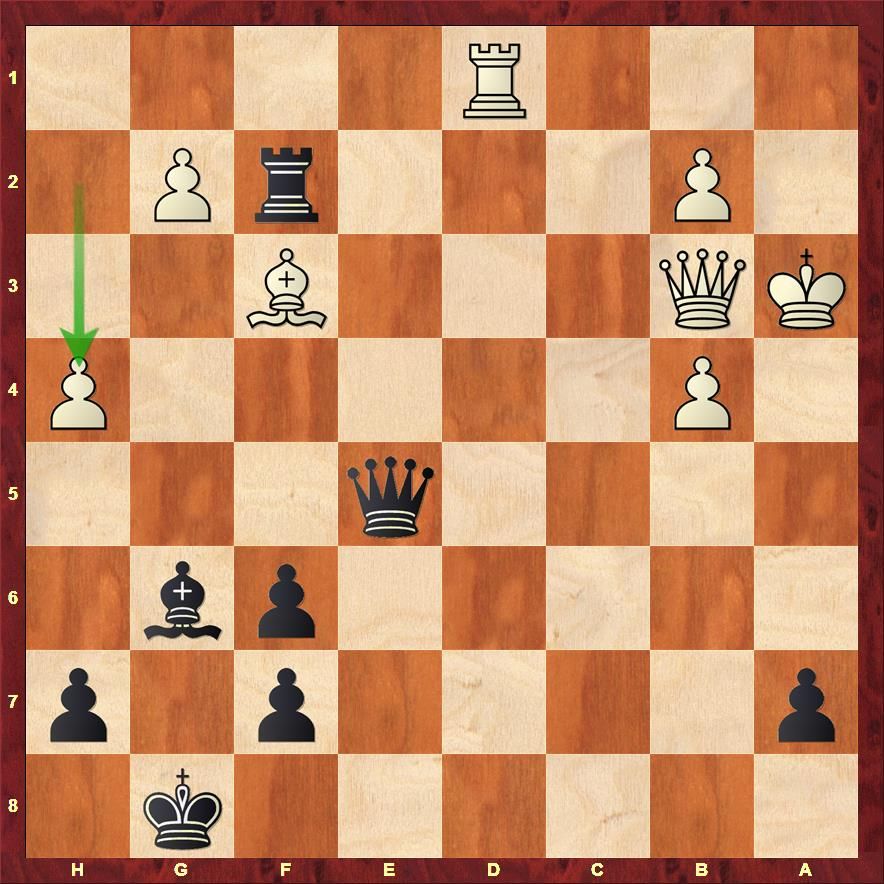 It seemed like Topalov was going to get away with all the mistakes he had made. However, the h4 was completely pointless. Anand was able to fork the queen and the rook with ...Bc2. Although Veselin had prepared Rd8+ Kg7, he now made the decisive blunder of the game. 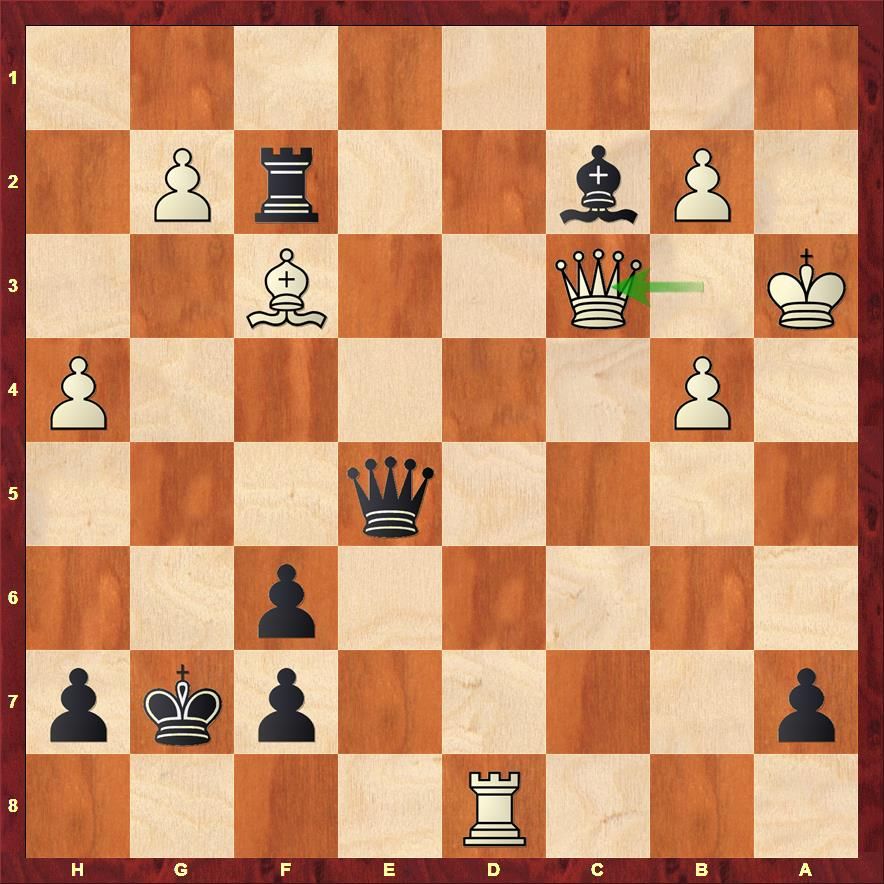 Qc3 was the losing move as after... 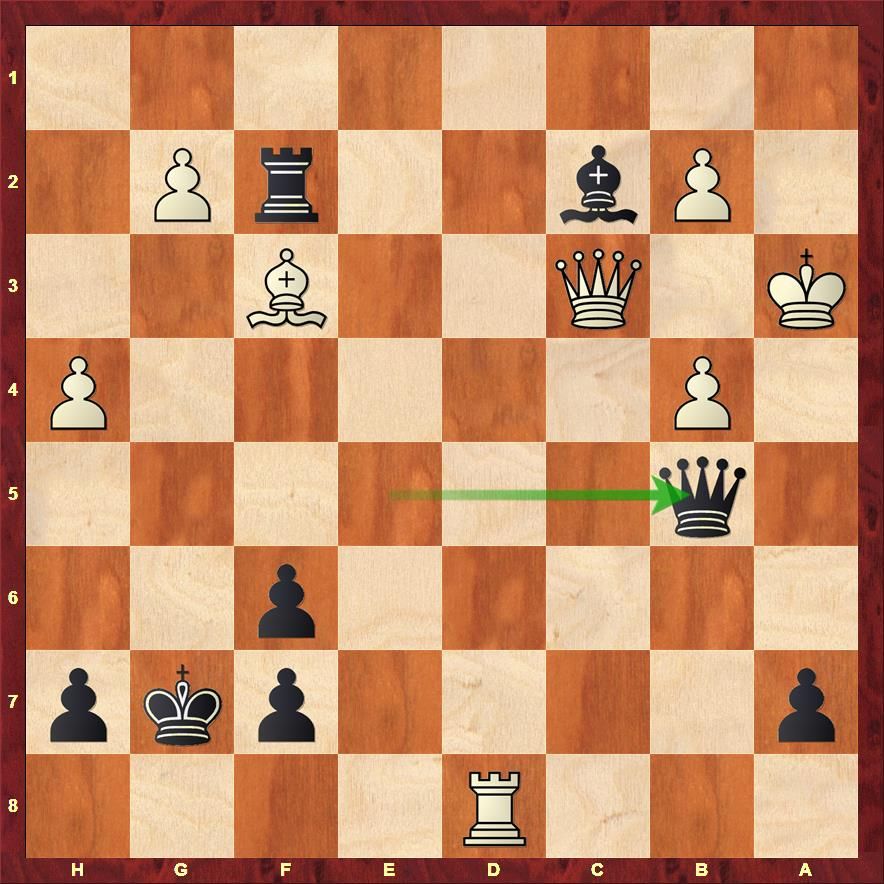 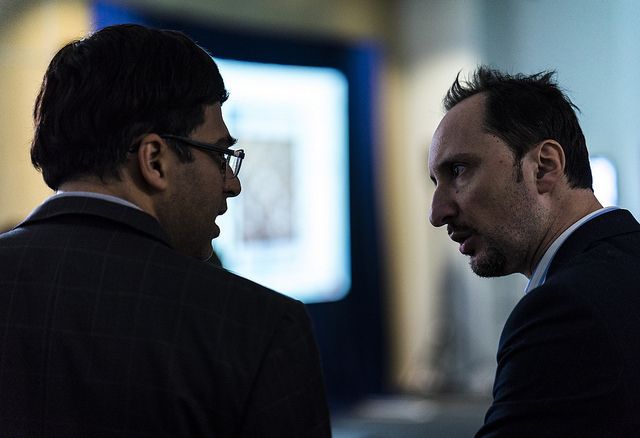 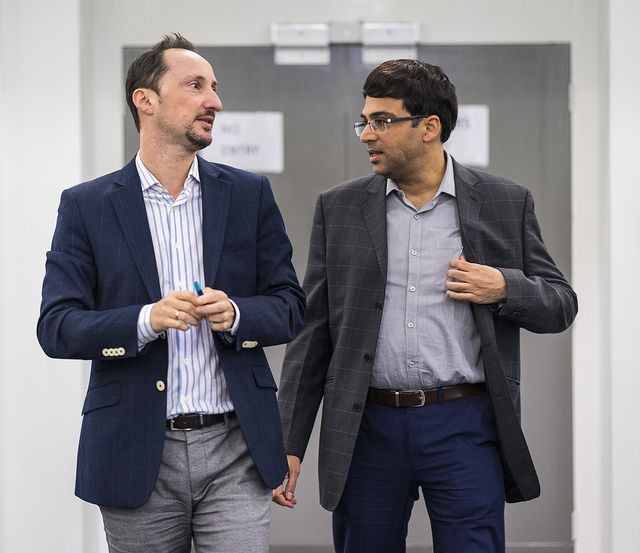 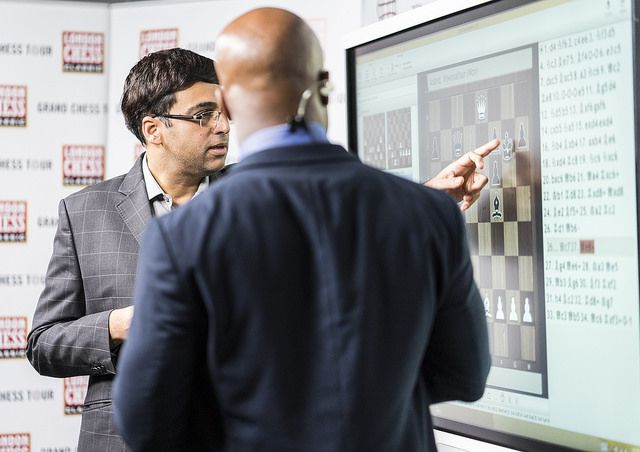 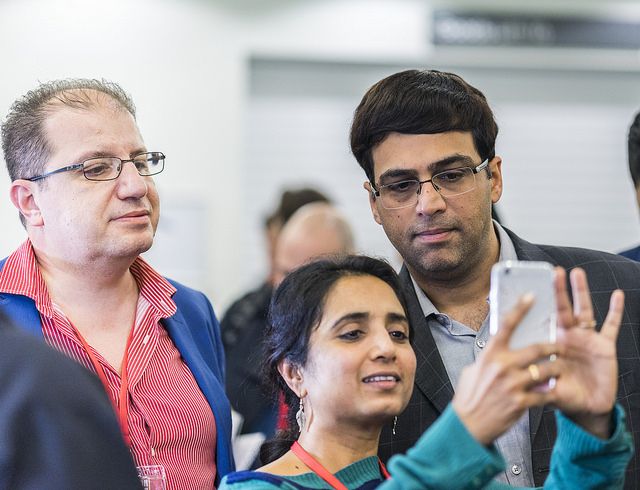 Taking a selfie with a five-time World Champion - recommended! 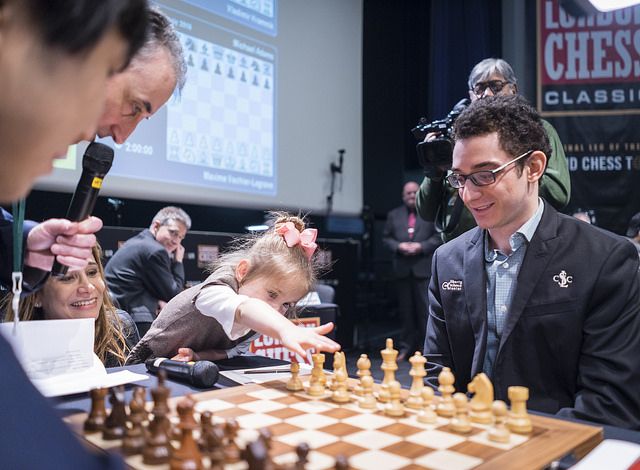 The most important game of the day was between Caruana and Wesley So. But there was a technical problem. The little girl who had to make the move couldn't reach the d-pawn that she wanted to play.

Fabi the king comes to her rescue! 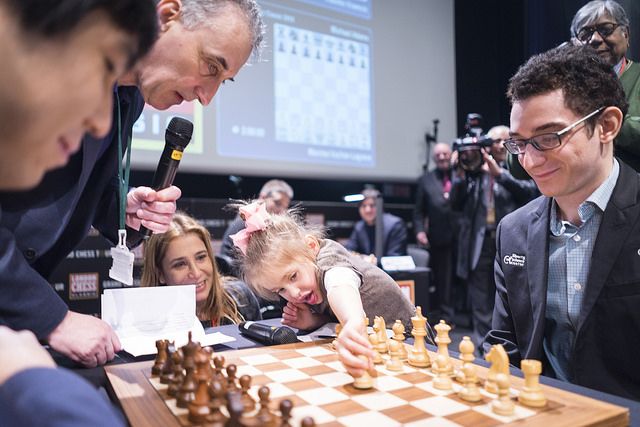 The move was made and the game began!
All the games apart from Topalov-Anand ended in draws. This meant that Wesley So had officially won the Grand Chess Tour 2016. 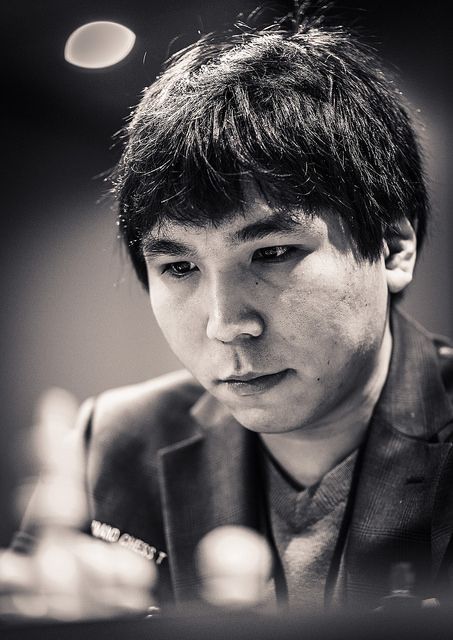 Wesley So goes back home with the prize of $ 100,000. There is a high possibility that he would win the London Chess Classic as well, which would take his total prize money to $ 175,000.
Wesley attributed his success in 2016 to constant hard work and the fact that he was regularly playing against World Class opponents.

Live games begin on 18th of December at 19.30 hours and can be followed by clicking on this link.