The Berlin Defense, which has made an appearance in so many of the previous Anand-Carlsen clashes, was summoned once again by the champion players. Anand gained a small edge, then he misplayed it to land in a worse position, but then Magnus returned the favour and both players went home fuming, with only a draw. Among the Indians competing in the FIDE Open being held simultaneously, GM Vishnu Prasanna (2514) was the sole winner in the fourth round as he removed IM Sopiko Guramishvili (2368) out of his way. An illustrated report.

The FIDE Open being held simultaneously alongside the Classic finally saw a sole leader when GM Evgeny Postny was able to win his fourth straight game, to be the only player with a score of 4.0/4. Among the Indians competing in the Open, GM Vishnu Prasanna (2514) was the sole winner in the fourth round as he removed IM Sopiko Guramishvili (2368) out of his way.

IM Sagar Shah (2441), IM Crg Krishna (2367), IM Tania Sachdev (2357), all drew their games against higher rated opponents. IM Swayams Mishra (2477) was playing a slightly lower-rated player, and he drew as well. All of them, except Tania who drew one additional game in the second round, moved to the joint second place at 3.5/4. 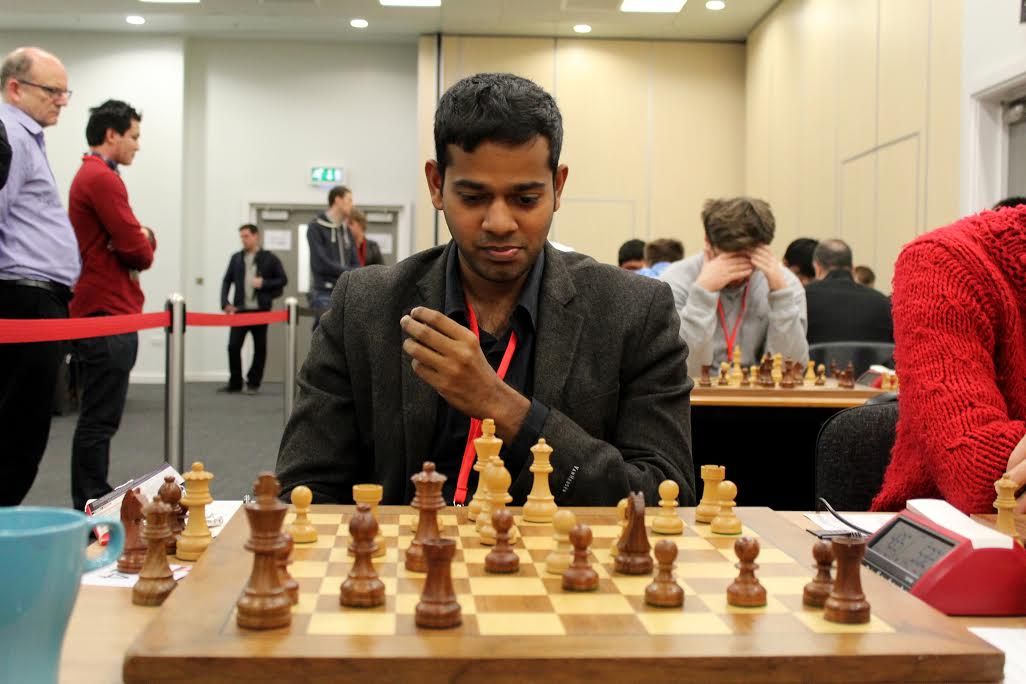 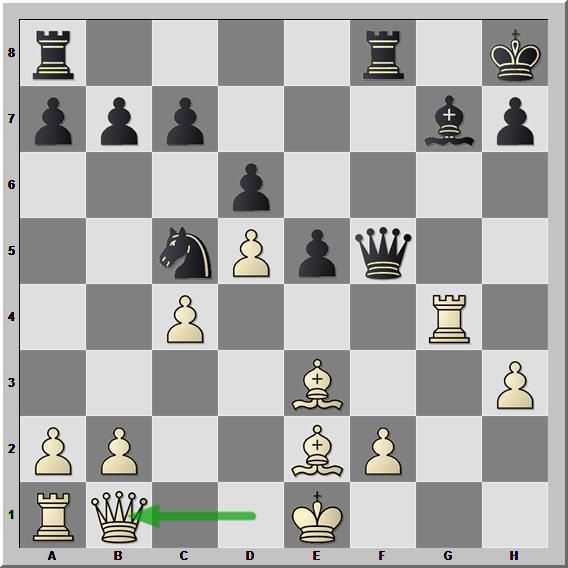 White just went 20. Qb1. What would you do if you were Black? Keep the queens or exchange it?

In the game, Sopiko chose to exchange the queens, and if you try evaluating the position after the trade, you may notice that all Black's counterplay due to the presence of the white rook on a1 has vanished. Black played 20... Qxb1+ 21. Rxb1, when White has all the trumps. Instead, 20...Qf6! with the threat of ...e4 holds the balance. 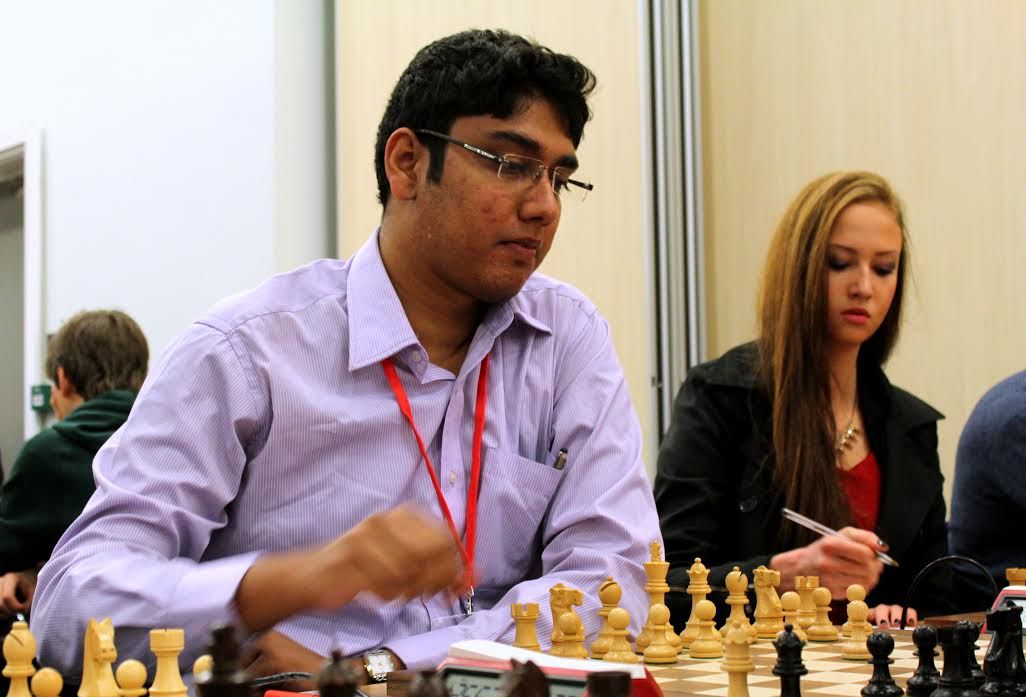 IM Swayams Mishra (2477) played a topical variation of the Slav with the white pieces. He won a black pawn on f5, but his weak pawn on e2 meant that a repetition was just good enough. 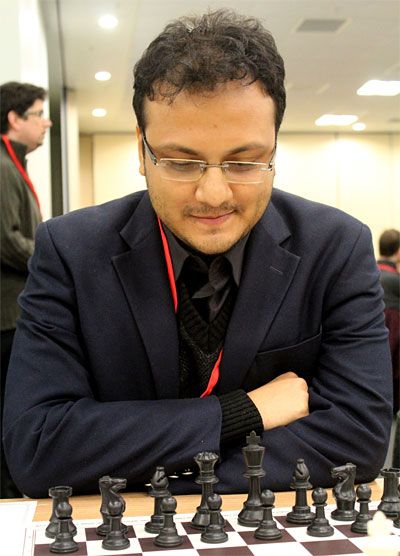 Sagar did have a slight edge in the early middlegame, but it did not prove to be substantial, and the game eventually petered out into a draw. 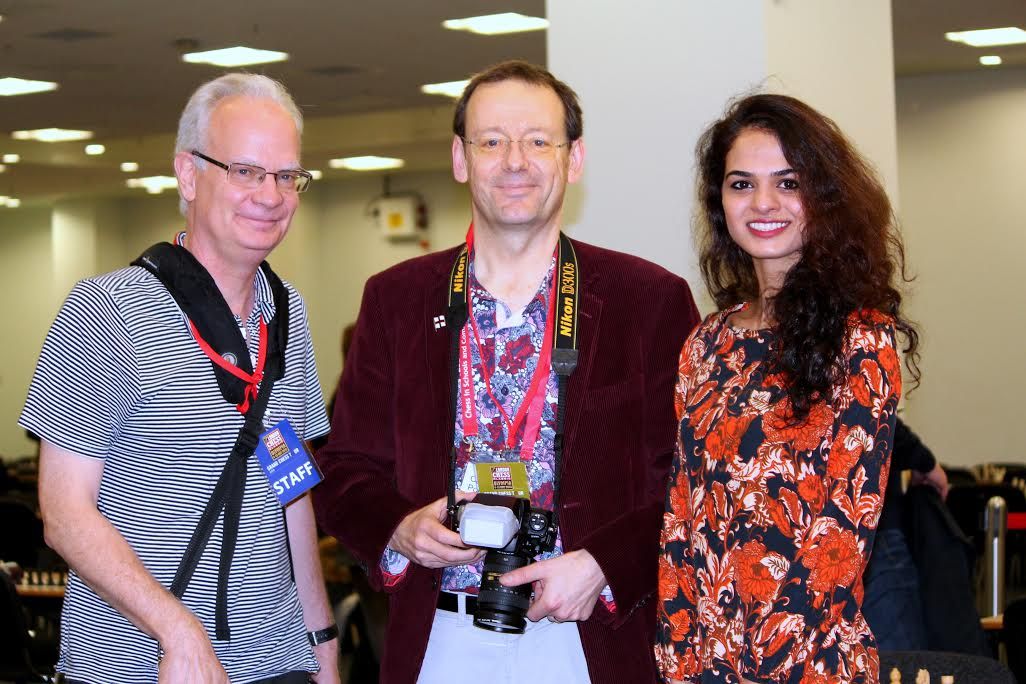 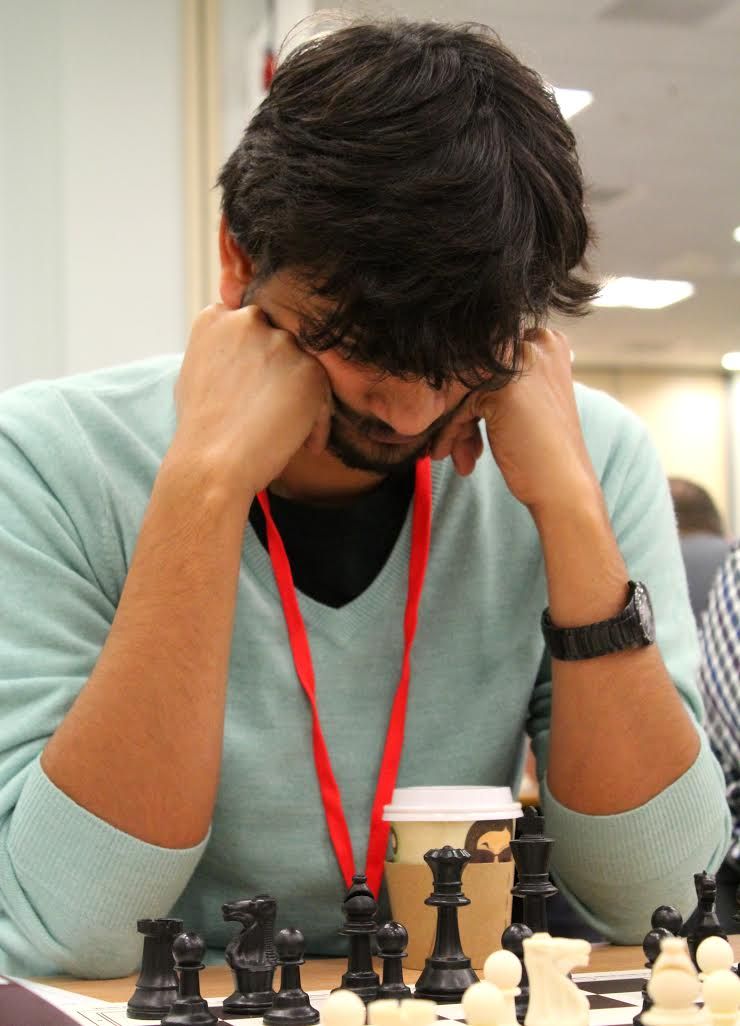 The Top-20 Ranks at the FIDE Open:

There was only one decisive result in the Classic  when MVL beat Topalov to climb into joint lead with Anish Giri. You can read the details in the complete report by IM Sagar Shah at our international news page. 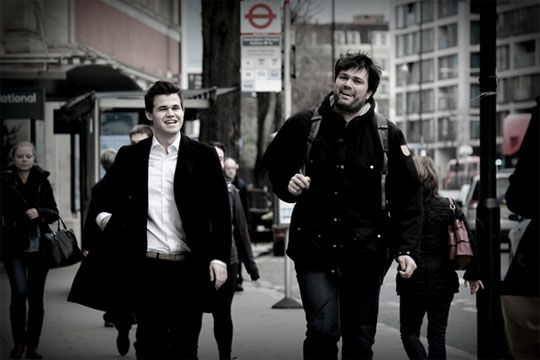 Magnus Carlsen and his second Peter Heine-Nielsen, who interestingly was a former Anand second, are in a joyus mood... 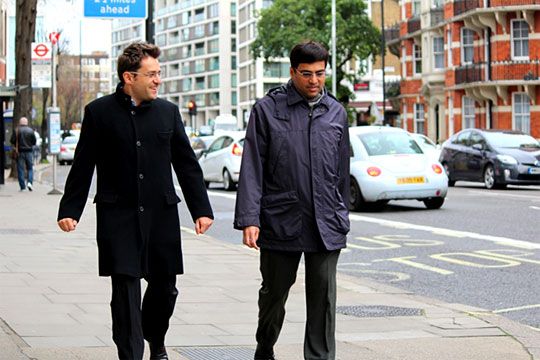 No, that does not mean Aronian is Anand's second! 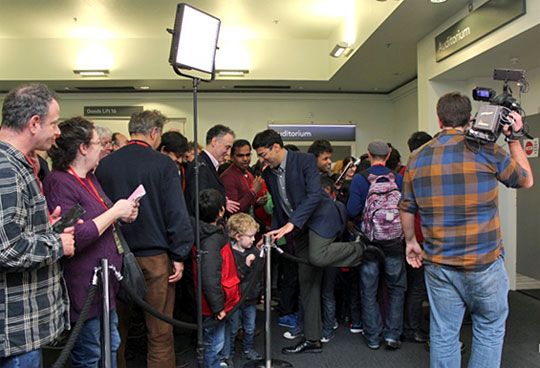 The round was held on a Sunday, and Anand was as eager to play as the fans were to watch! 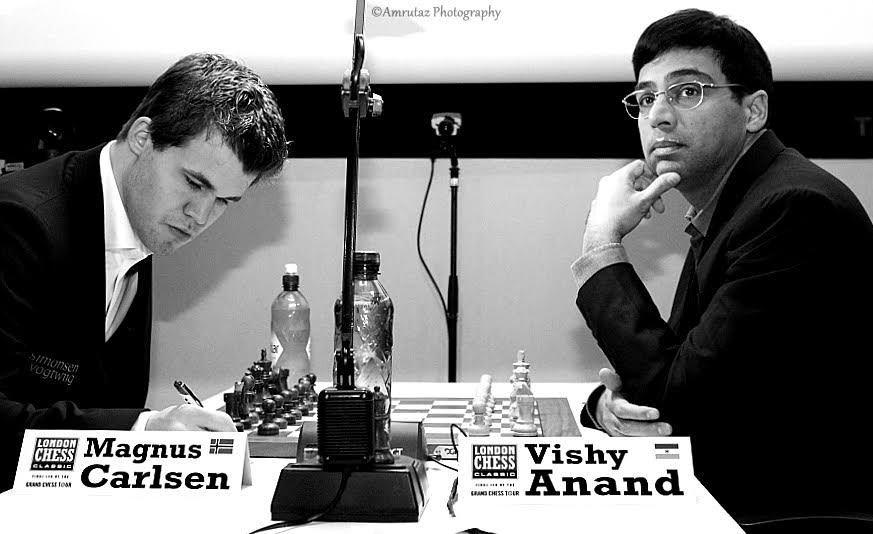 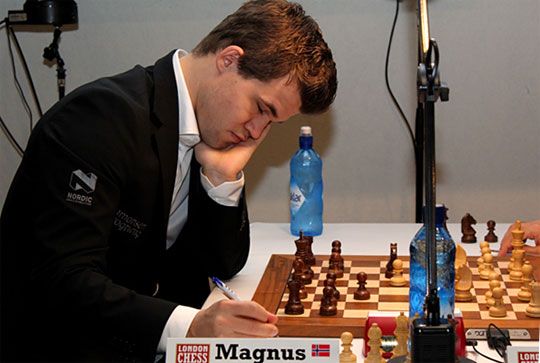 The sight of yet another Berlin, which honestly should be renamed London, seems to have lulled Magnus to sleep as he soon found himself sailing on a choppy sea... 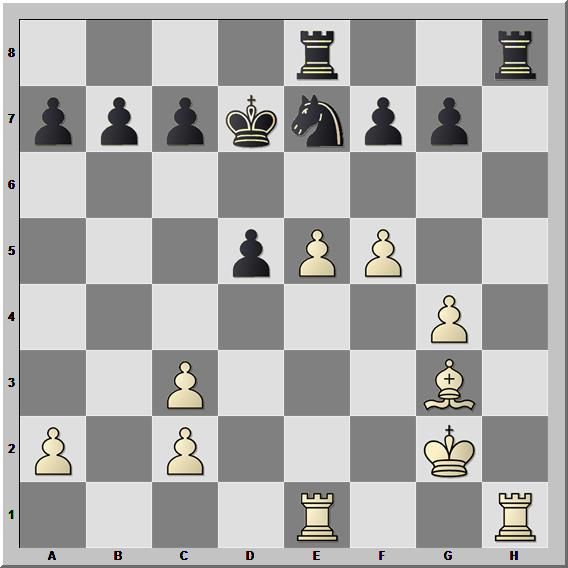 As you can see in IM Sagar Shah's analysis below, Anand , who had the white pieces, could certainly claim an advantage here. As the analysis shows, 26. Kf3? was an oversight by Anand who lost all his advantage after this move. Carlsen replied 26... Rxh1!1 27. Rxh1 Nc6, when suddenly, the e5 pawn is hanging. Black is already pretty fine according to Sagar. 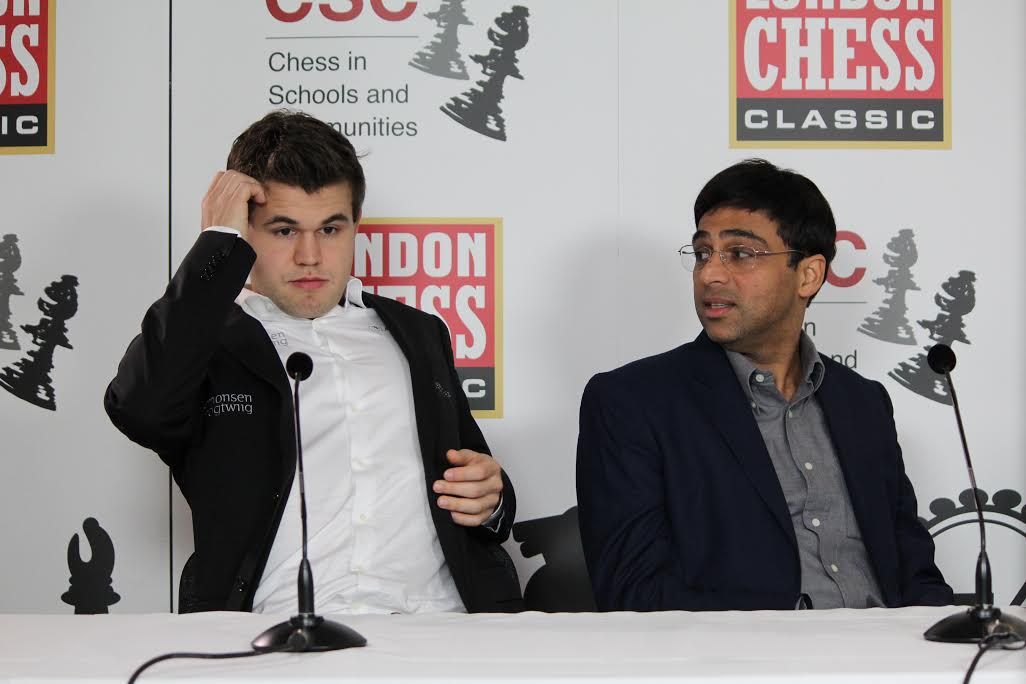 Magnus got an edge after some inaccurate moves by Anand, but Magnus returned the favour, to leave both the contestants fuming

Pairings for Round 5 of the FIDE Open

Watch the games LIVE on Playchess!

All photos by Amruta Mokal