Chess in God's Own Country...

Imagine you wake up early to play a morning round and are greeted by a musky fragrance caused by the raindrops caressing the flora around you; summoning a feeling so powerfully evocative that it cleanses your body and purifies your mind. Blessed with such an environment, imagine playing your favourite game in this land referred in India as 'God’s own country'. We have a finely illustrated report.

Fourteen-year-old TM Abhishek of Kerala won the Kottayam FIDE Rated Open Tournament ahead of senior players, which was held at Menon Mapilla Hall, Kottayam, from 8th to 11th October. Kottayam, being the home-town of the Chess Association Kerala’s secretary Mr. R. Rajesh, has become a chess hub in Kerala, nicknamed as 'God’s own country. 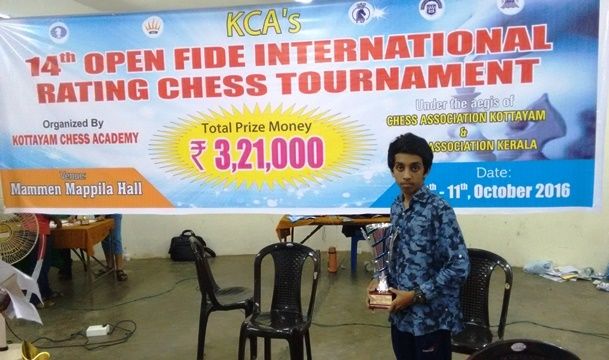 Unassuming Abhishek lifted the title with a cash prize of Rs.35000/-

In spite of the mass exodus to Bangalore tournament held simultaneously, it had a reasonable strength of 363 players, mostly from Kerala, Tamil Nadu, besides AP, Telangana, Karnataka, Pondicherry, Gujarat, U.P and West Bengal. Former under-25 state champions of Tamil Nadu — Dusthageer Ibrahim and SS Manigandan — occupied the top two slots of the seeding.

Youngsters held the fort in the second round, holding experienced stalwarts like the top two seeds Dusthageer and Manigandan as well as ninth and tenth seeds Mani Bharathy and P Rajasekaran from Tamil Nadu. K Gopalakrishnan, a FIDE trainer, was beaten by SK Shabaaj of Telangana in the third round. Upsets on top boards continued in the fourth round, with thirteen-year-old Dhanush Raghav of Tamil Nadu sharing the point with experienced J Malleswara Rao of AP on the top board and Kerala’s upcoming KU Marthandan, rated above 2000 losing to P Balaji of TN. Ten-year-old Jubin Jimmy from Kollam, a southern city in Kerala outwitted OA Raju of the same state on the top board.

Dusthageer came back into contention in the sixth round, with a resounding win over Salil Kumar and five more players shared the lead with 5.5 points each. The turning point of the tournament was the defeat of the top seed Dusthageer in the seventh round by Abhishek. 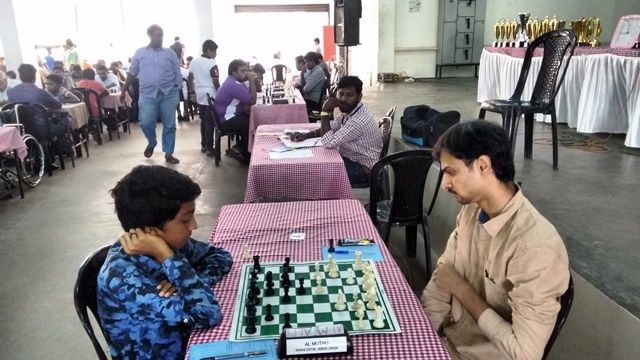 Abhishek defeated the top seed Dusthageer in the seventh round to get into the reckoning.

Abhishek joined Malleswara Rao, who defeated another Madurai player P Uma Maheswaran, in the lead with 6.5 points each. Six players (KU Marthandan, B Vinodh Kumar of Pondicherry and Mani Bharathy of Coimbatore – to mention a few) were on 6.0 points at the end of the seventh and penultimate round. 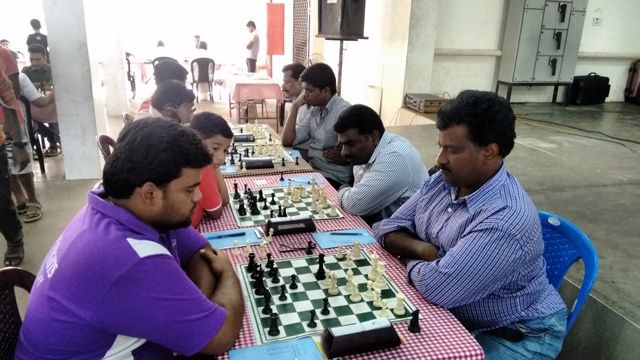 Malleswara Rao jumped into the joint lead by beating P Uma Maheswaran in the seventh round.

In the interesting final encounter, Malleswara Rao drew with Abhishek. Marthandan, Vinodh Kumar and Mani Bharathy scored wins to tally 7 points for a five-way tie for the first place. Rao was the runner-up. 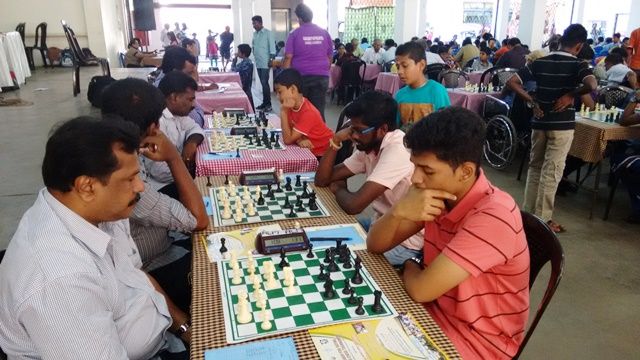 Abhishek stole the limelight when Buchholz tiebreak smiled on him to let him win the title and a cash prize of Rs.35000/- by the narrowest of margins. Malleswara Rao, Mani Bharathy, Marthandan and Vinosh Kumar finished in that order. Abhishek, a fourteen-year-old boy from Calicut, is trained by his city mate IM K. Ratnakaran. A total cash prize of Rs.3,21,000 was awarded. 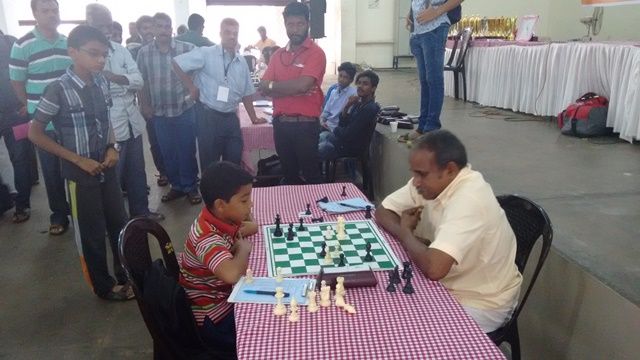 Ten-year-old Jubin Jimmy of Kerala defeated his state mate OA Raju on the op board of fifth round.

KCA has organized 14 FIDE rated tournaments in the recent past. Kottayam became popular in chess circles when Kottayam Chess Academy organized the National Premier Chess Championship in 2014 in the picturesque CMS college, the oldest college in India.

Besides being an unpolluted beautiful tourist centre, Kottayam is a pilgrimage hub for all religions. St. Alphonsa is the first woman of Indian origin to be canonised by the Catholic church in 2008 (recently Mother Teresa was canonised). 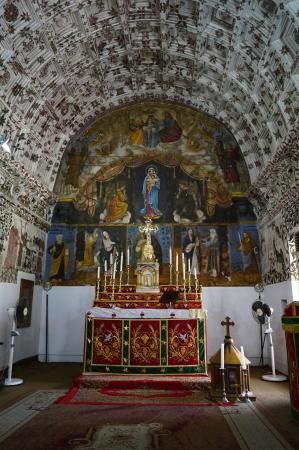 The huge wooden pillars which holds the Thazhathangady Masjid is carved out of single timber and is still restive of time. The ablution basin is made out of one piece of granite. 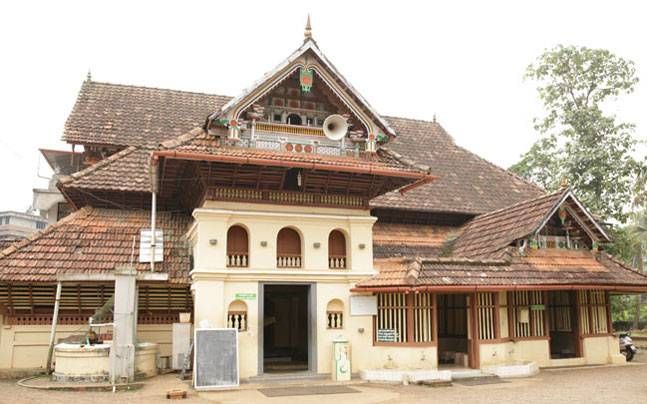 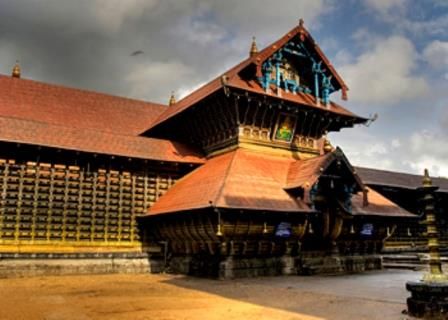 The Ettumannoor temple. The myth says that Pandavas worshiped in this very ancient Shiva temple in Kerala.
Chief Arbiter IA Anantharaman with his wife. The professor is amongst the most learned
people in the Indian chess community. He wrote this report in his capacity as the chief arbiter of the event.

Editor's Note: Kerala, being my home state, has always been close to my heart. I would often end up visiting the God's Own Country on my vacations. In the next few captions, you will see why I love this state so much. Although the Keralites themselves scoff at it as you can understand from this hilarious English parody song.

The Kerala houseboat is a cultural heritage which in itself tells you a lot about this province.

The country-side house boats are referred to as ‘Kettuvallam’ in Malayalam – the language of Kerala. They are made up of locally found materials like of bamboo poles, coconut fibre, ropes, bamboo mats, and are often 60-70 feet long.

Backwaters of Kochi: a backwater usually means that part of the river which has little or
no current flowing through it, but is saline – unlike a lake.
Kumbalangi Backwaters in the evening
Inside of the Kalamandalam – a typical south Indian temple architecture. They are fortress-like structures with the main temple in the center.
Kovalam Beach

The traditional way of eating food in Kerala and south India in general. The food is served in a banana leaf which does a plate’s job. It is believed that this maintains the freshness and tenderness of the food. The rice is known as rosematta rice, an indigenous variety that gives you an earthy flavour which reaches enticing proportions when eaten with red meat.

Bekal
Silent Valley at Palakkad
A tea plantation at Palakkad
Ayurvedic medicines
Boat race
Champakulam boat race competition
The folk dance of Kerala  - Kathakali
An elephant at .... No, this image is not photoshopped
Elephants at Thrissur pooram festival
Vishy Anand? No, the Tiger of Madras lives in Chennai, in the neighbouring province. This
guy lives in a zoo in Thiruvananthapuram – capital of Kerala.
Lions at Neyyar Safari Park
A Malabar Flying squirrel
India’s National bird – Peacock – is very common in Kerala in contrast to many other Indian
provinces, partly because of the flora and fauna that is part of the state

For the players playing in Kerala tournaments, it is a combination of a business trip and a pleasure ride. Nothing to lose here! I made a trip to Kerala in a train last year and wrote about it, with many pictures, here.

For playing in Kerala, you can follow Rajesh Nattakom for timely updates.