When it comes to chess engines, Komodo 11 is bang up to date and is often referred to as the engine that can think like humans! Amazed by this, Davide Nastasio got his hands on this silicon giant to test it out for himself. After spending several hours exploring the various features of Komodo, he was not only convinced that the engine does analyse positions in a human-like manner but also felt it is an extremely useful tool for the modern chess player. Below is his insightful review. 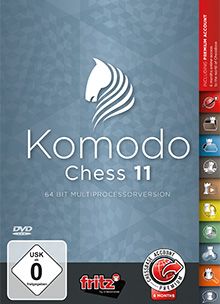 I was curious about Komodo because it is often referred to as the engine which plays like a human. Obviously, such label didn't make sense to me, because computers are not humans. So how can a chess engine behave like one? I tried to discover it through the latest version of Komodo, the number 11, sold by ChessBase.

The true world championship is not the one played by Carlsen against Karjakin, but the one between engines, which are clearly above and beyond whatever a human will ever be.

We have all been brutalized by the tactical force of an engine. Practically they immediately see 5-7 moves ahead, and we cannot escape their tactical traps. But would an engine be able to play a positional sacrifice? A positional sacrifice, like giving up an exchange, is something we have been habituated to see in the games of Karpov or Petrosian but not in engines games, where often the win is decided by a 0.75 pawn advantage, after 80 moves, in an endgame in which most humans have no clue what is happening or why.

For those interested in learning more about positional sacrifices, I'd recommend going through GM Tiviakov's DVD entitled Art of the Positional Exchange Sacrifice. You can also read my dedicated review on this DVD here. 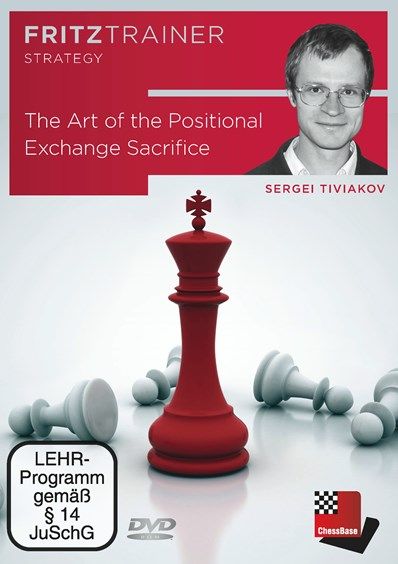 Art of the Positional Exchange Sacrifice
For instance, what would you play as White in the following position? 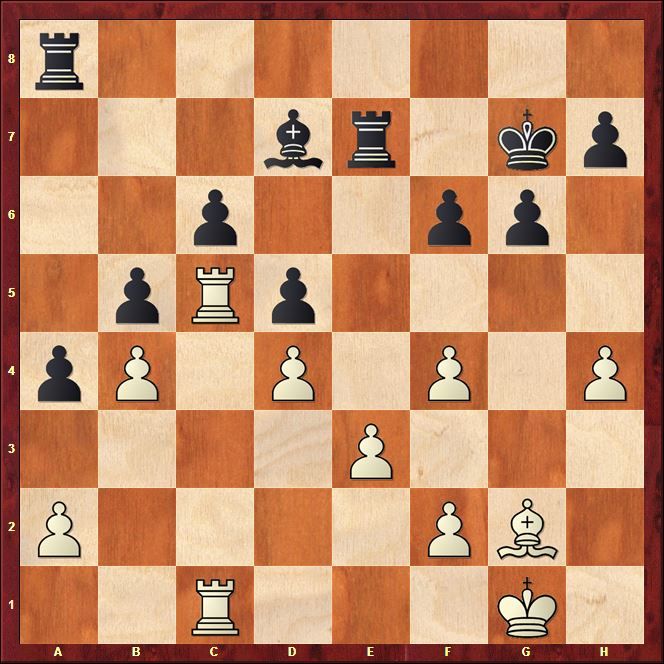 Notice this game was played 4 years ago, now Komodo is much better! In fact, while writing this review I tested Komodo extensively and fell prey to these positional sacrifices more than one time.

Komodo comes with the Fritz15 Graphic User Interface (from now on abbreviated as GUI) but it is possible to use the engine also with other GUIs as well. 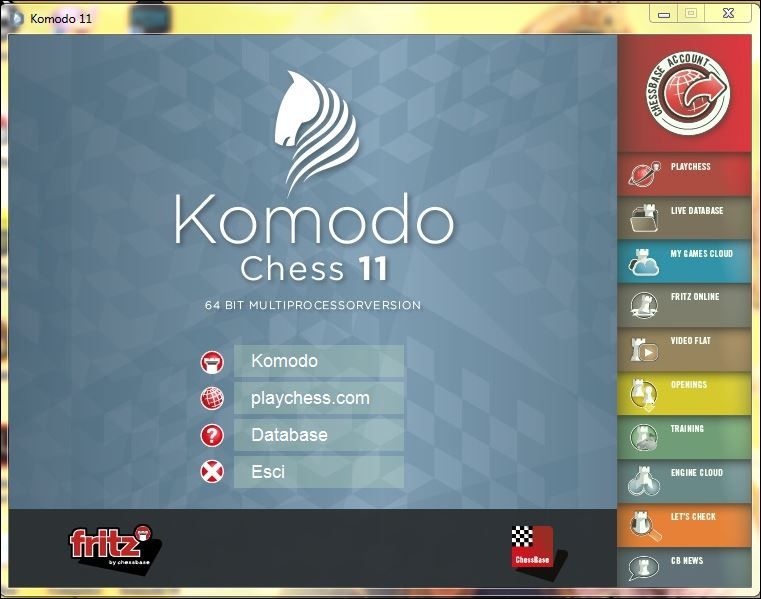 Komodo's main screen
Let's say I want to teach a lesson to Komodo, on how chess is played, how would I do it? 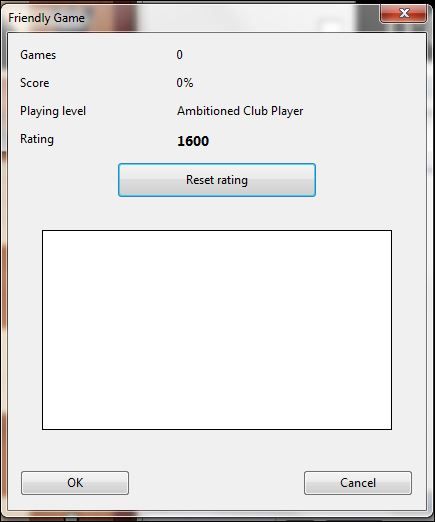 ...and set the rating to: "ambitioned club player" which is 1600
The first game was funny, because at a certain point, in Italian, the engine told me: "I never told you this, but you should study more opening theory, ask the catalogue from Le Due Torri" (Which is a famous chess shop in Bologna, Italy)! 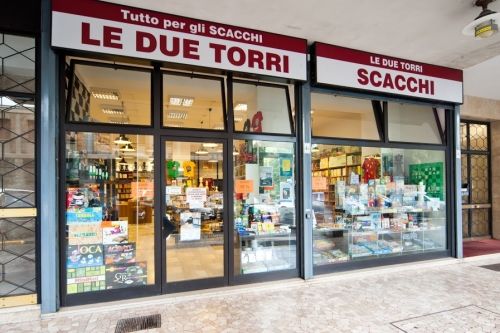 Then it continued making fun of me asking: "Are you looking in the encyclopedia?" maybe because I was thinking too much in the opening!

Another question which could come to mind is: how do we use a beyond human world champion engine? I believe there are many different usages for beginners, amateurs, as well as experienced tournament players.

For example, in the western mentality to play handicap games is a shame. This is not so in most oriental versions of chess, be they Shogi (Japanese Chess) XiangQi (Chinese Chess) or Go (WeiQi) where it is common for a master level player to play with a handicap against an amateur. In this case, the Fritz GUI has the following parameters: 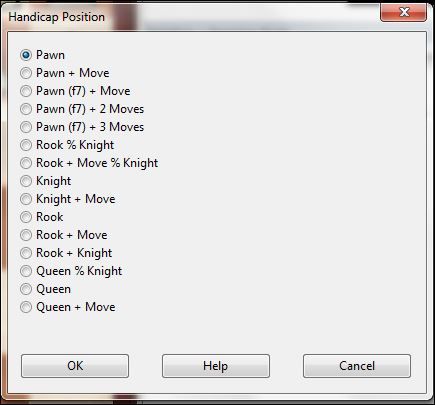 I began playing with Queen + Move

I played at least one game with most handicap levels. Now with such big advantage, one could think the game was useless, but Komodo, set at maximum strength, made it last 80 moves! I didn't blunder, and yet lost pieces! But later, I realized I didn't use the pieces effectively either.

Another very important way to play, if one doesn't like the handicap level, is the "rated game" under the training tab: 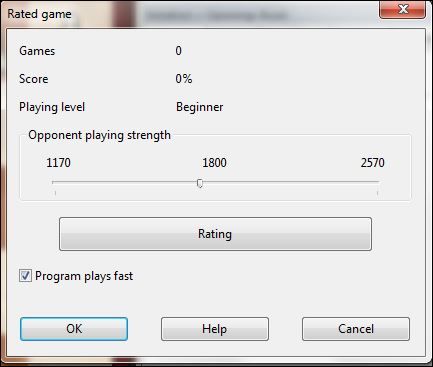 Now let's say that I'm going to play in a tournament for Under 1900, I will set the slide to around 2000, and play a series of 5-6 games, like a match, so I can understand the holes in my opening repertoire.

If instead, I want to discover my strength, I would suggest the following ladder:

In this way, one goes 50 points up with each won match. The experience is more pleasant than getting smashed every single game by the engine, and at the same time, one can discover his own strength. Please be aware that time control plays a big difference. For example I had problems winning the game when playing bullet against the engine (2 minutes for the entire game, with 1 second added per move) but when I tried one of the time controls for the World Open (G7 /d2 - game in 7 minutes with delay 2 seconds) I didn't have any problems to win the engine set at 1500.

For the price of 1 hour or less with a GM, one can have the best engine in the world and play for endless hours. By the moment this review was finished, I had played more than 150 games against Komodo with many different time controls, handicap, training etc.

The Fritz15 GUI has an automatic replay the game button in the Analysis tab which is really nice. Strangely enough, it doesn't exist in ChessBase 14.

Always under the same tab, we have full analysis. Once clicked on, it comes out with a new window with the analysis options. 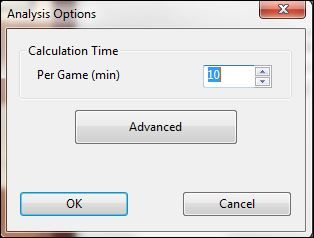 I click on advanced and find the next window: 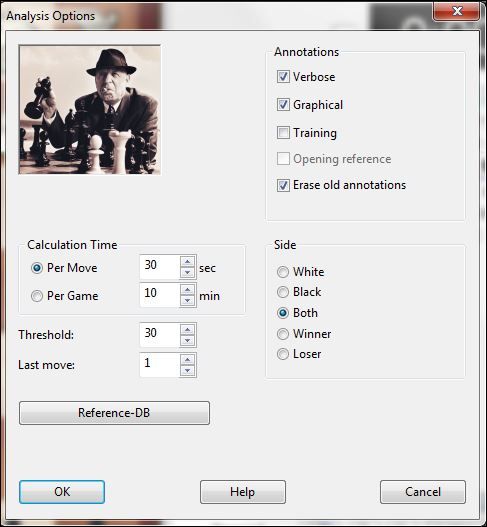 I clicked on training because that allows the engine to create a series of puzzles within the game, based on critical moments. I unchecked "erase old annotations" to avoid erasing my previous comments, and later compare with Komodo comments. If the game I want to analyse is a blitz game online, I don't put more than 10 seconds per move, while if the game is a tournament game, I put also 1-2 minutes per move.

There is, however, one important thing – the "reference DB" button. This is where Komodo takes its information to comment on the opening. If I had only the original Database which comes with Komodo (the original database has about 3 million games), I would use that. But I have Mega Database 2017, with more than 7 million games, so I instructed the program to use Megabase 2017, giving the correct directory in which such database was installed.

Con: After reviewing this wonderful new engine, I must be honest as a reviewer and add the "cons" which are things the programmers could do to improve in next versions.

I'm not a "pro" with my own time. I have family and a wife, which means that every time I'm playing a blitz game she will come to ask me something, and I will have to give my total attention while moving and trying to win the game. Now it seems at ChessBase they are all single, with not a worry in the world because nobody thought I need a "pause" button when my wife will come just to interrupt my just started blitz game, and the Silicon monster will take advantage of it!

I need at least a couple of pause buttons because there is also the dog, friends calling, and son, all conspiring to come to ask me something when I'm playing.

Please notice, this is a positive feedback, not a negative criticism. Maybe, the programmers of the Fritz GUI are not chess players, or they don't know what one expects if they are losing on time. That is something which needs to be addressed. Otherwise, there is no reason to play with time if one doesn't lose when the clock runs to zero.

What’s even funnier is that I could still play after losing for time! I made a move just to understand how it works, and the engine answered while its clock was still running. I'm sorry; I'm too habituated to real online games where if one loses on time, the game is over.

However, if one plays a rated game under the training tab, the time loss will be enforced - so maybe it was a choice made by the programmers - but I would like to have the chance to play timed unrated games like I would against a friend.

Again the GUI maybe wasn't made for Komodo, I don't know, but clearly, they need to work on it. For example, in the handicap games, I wanted to assign a fixed time to the engine because I don't want to wait till the end of time. Strangely, it wasn't possible to assign a time control only to the engine. Amusingly, the engine didn't respect the 5 seconds per move I gave and often lost on time, even if it wasn't a timed game!

Obviously, if I play with such huge advantage I don't expect the engine to resign by move 5!

The Differences with ChessBase 14: Often I'm asked why someone should buy Komodo or Fritz and ChessBase 14 since the Fritz GUI has database capabilities. My answer is: I believe it depends on the level of your chess, and what your goal or training is.

If you are not a tournament player, you don't need ChessBase 14. If instead, you are really interested in chess progress, ChessBase 14 is a fundamental tool. For example, a friend of mine reached master title in the US, which is when one reaches 2200 USCF rating. Then he went back on vacation to India and played some tournaments there. The players at his level (and below) were all using ChessBase 14, and many prepared against him, one even told him the amount of time (3 hours), and the games he watched. My friend had a very bad tournament. He had difficulties even to draw players rated 400 points below him! Why?

Because they were using all the tools professionals use today and one of these tools is ChessBase 14. Could you do the same preparation with Fritz or Komodo? No. ChessBase 14 is able to create a dossier on the player you need to prepare for, the openings he uses, and the weakness in those openings. I could continue for hours on the differences, but I think that would be more appropriate for another article. However, the main difference is that Komodo is made for playing chess while ChessBase 14 is made for learning, improving and preparing for tournaments. When the time comes, one will feel the need to migrate from Komodo to ChessBase 14.

In conclusion: I was really happy to play against Komodo, and keep my interest in chess high. Engines are clearly above and beyond what humans can do, but we can use them to our advantage, and to improve our training.