"Without having a complicated character like Korchnoi, or without doing anything artificial he is able to maintain a very high level of play. I think he simply enjoys the process of playing chess, he still relishes the joy of the game, no matter how competitive it is. That's one of his unique features and his key to success." These are the words of Joel Lautier who was one of Anand's competitors in the 90s. In this article you can read what Lautier has to say about the Indian Champion and we also bring to you one of the gems of Vishy's career - his blistering win against Joel from Biel 1997!

It was the tenth round at the Candidates 2016 tournament in Moscow. A man in his forties, with a French beard, and impeccably dressed, was standing in the spectator's zone of the Central Telegraph building in Moscow. The corporate appearance along with the fact that he was away from the crowd convinced me that he was not really related to chess and this might be his first appearance at a tournament. But a closer look revealed a well-known face! I walked up to him and said, "Hi! Are you Joel Lautier?" Joel looked at me slightly surprised. "It's good to see people still recognize you even though you have quit chess for ten years now!" Joel knew me from the articles he had previously read on ChessBase. We spoke for quite some time and while he was about to leave, I asked him, "I am in Moscow until the end of the Candidates tournament. Can we do an interview for the ChessBase newspage?" Joel was fine with the idea and on the day after the tournament ended I contacted him. Joel's reply came immediately: "Let's meet at 4 p.m. in the cafe of Hotel Intercontinental on the Tverskaya street." I packed my stuff and took the list of questions with me and made my way to the place of the interview. Lautier entered a few minutes later, ordered a bottle of mineral water and a cup of coffee and we began. After an hour of speaking with him I realized what a versatile man he is! And that's what separates Joel from almost everyone else. He is ready to take on a new challenge and makes sure that he excels in it.

The interview has been published on the ChessBase International newspage and you can read both the parts by clicking on the links below:

Part I of the interview on ChessBase.com

Part II of the interview on ChessBase.com

In this article we would like to share with you the words Lautier said about Vishy Anand:

Vishy, he is an entire period of chess by himself! He has been incredibly consistent in all these years. I find that truly amazing. And he still manages that at an honourable age [laughs]. I think that's what is truly admirable about him. Without having a complicated character like Korchnoi, or without doing anything artificial he is able to maintain a very high level of play. I think he simply enjoys the process of playing chess, he still relishes the joy of the game, no matter how competitive it is. That's one of his unique features and his key to success. It was clear that Vishy was a rough diamond when he was young. He could do some complicated things with such ease.  He only needed to sit on his hands. Once he got the maturity, which was somewhere in the early 90s, he became a spectacular player. He has had a wonderful career and Vishy commands a lot of respect. 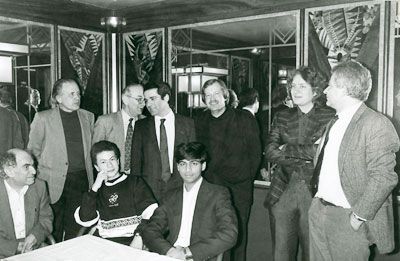 I have two little stories to share about him. A long time ago, Vishy and I both played in the GMA open in Belgrade, in 1988. At the time I was friends with an American GM called Michael Wilder, who later stopped chess and went on to become a prominent lawyer. Mike had been witnessing a postmortem by Vishy, and he was absolutely enthralled by Vishy’s tactical skills and speed of calculation. In the middle of his enthusiastic account, he suddenly saw me frowning (remember, I was very ambitious and competitive as a teenager) and he amicably said: “Don’t worry, Joel, you’re also very strong, you’ll be 2650 one day.” But then after a short pause he couldn’t help it and added: “But Anand will surely be 2750!” Well, what can I say, he has been pretty accurate.

The second story took place a few years later, in 1992. Vishy was visiting Moscow, and Evgeny Bareev invited him to join us for a day, at one of our training camps in a Moscow suburb, out in the woods. When you put several grandmasters together in the same room, it often ends up in a blitz contest, and this time was no exception. Vishy was in brilliant form, and he beat the hell out of both Evgeny and me. I was no mean blitz player myself, so this was both a shock and a painful experience, which I still remember today. As Vishy saw our dispirited looks during the ensuing dinner, he said with a smile: “Don’t worry guys, what I did to you today in blitz, Chucky (Vassily Ivanchuk) normally does to me”. The funny thing is, I don’t think he was joking! 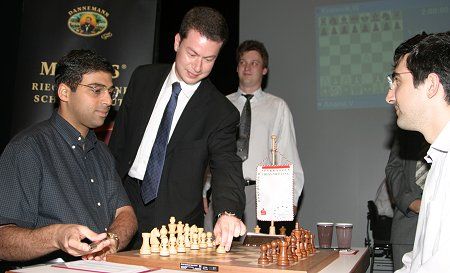 The above picture is taken from Dortmund 2004 from ChessBase newspage. The caption to the picture was very interesting:

"On the penultimate day in Dortmund the first game of the final between Vishy Anand and Vladimir Kramnik was ceremoniously started, as is often done in such cases, by a well-known public personality. Except here it was a colleague and sometimes Kramnik second, Joel Lautier. As president of the Association of Chess Professionals Joel has achieved celebrity status. Well, at least there was no problem on his moving the wrong pawn or making an illegal move. And also we love the look on Vlady's face in the picture above."

When we speak about Lautier and Anand, one game does come to mind — Anand- Lautier, Biel 1997. We have the game for you annotated by none other than Vishy himself, but first, we would like to test you a bit: 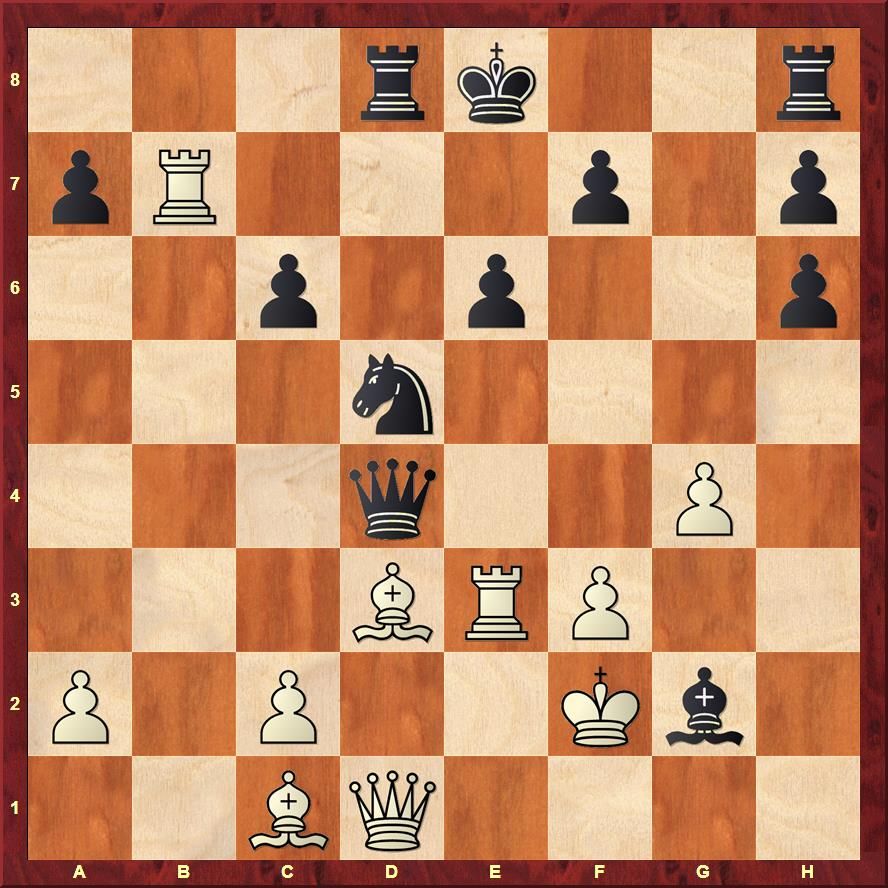 Vishy Anand has recorded two DVDs for ChessBase. You can now get it in the ChessBase India store for just Rs.1799/-.