The popular Tamil Nadu Chief Minister Jayalalithaa, also known to her followers as Amma, passed away in Chennai. She was one of the most powerful leaders from India and was instrumental in bringing the World Championship to this country, a match that saw Anand step down to allow Magnus to begin a new era. She passed away at the age of 68 at Apollo Hospital in Chennai after struggling with health related issues for three months. She was a believer in the power of chess and introduced the game as a compulsory activity in all schools in Tamil Nadu, making her state an intellectual powerhouse.

Tamil Nadu CM Jayaram Jayalalithaa, a popular leader among the masses for over three decades due to her poor-friendly programs, passed away on Tuesday night. She had suffered a cardiac arrest on Sunday evening. Schools and colleges will remain shut for three days and the state will be mourning her demise for a week starting from today.

She was popular in the chess world for bringing the World Championship to India with a mind-boggling prize fund of 2,650,000 euros, that was divided 60-40 between the winner Magnus Carlsen and loser Viswanathan Anand.

A view of the 2013 World Chess Championship 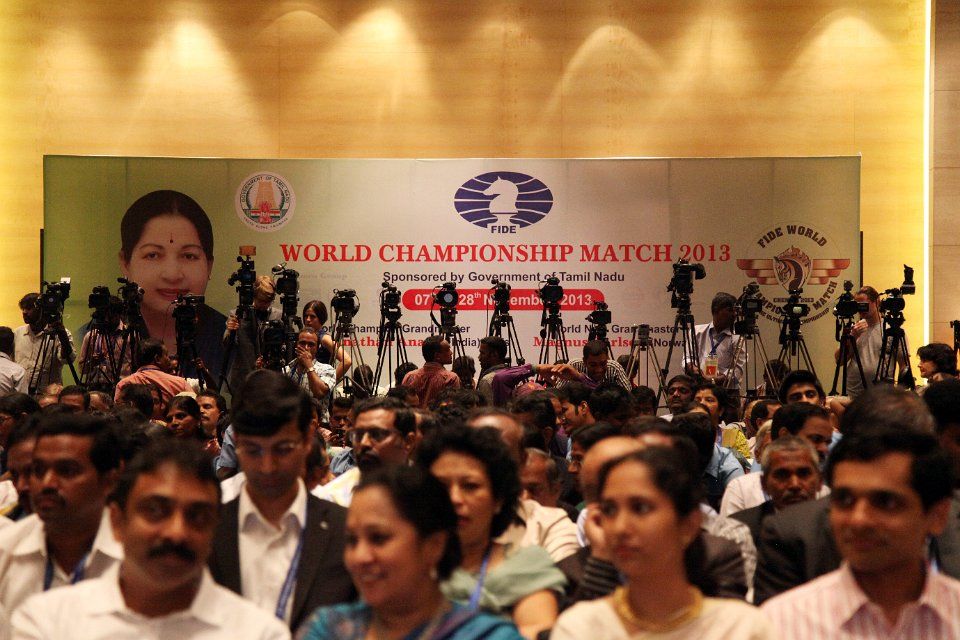 The competition is remembered even today for the manner in which it was conducted. 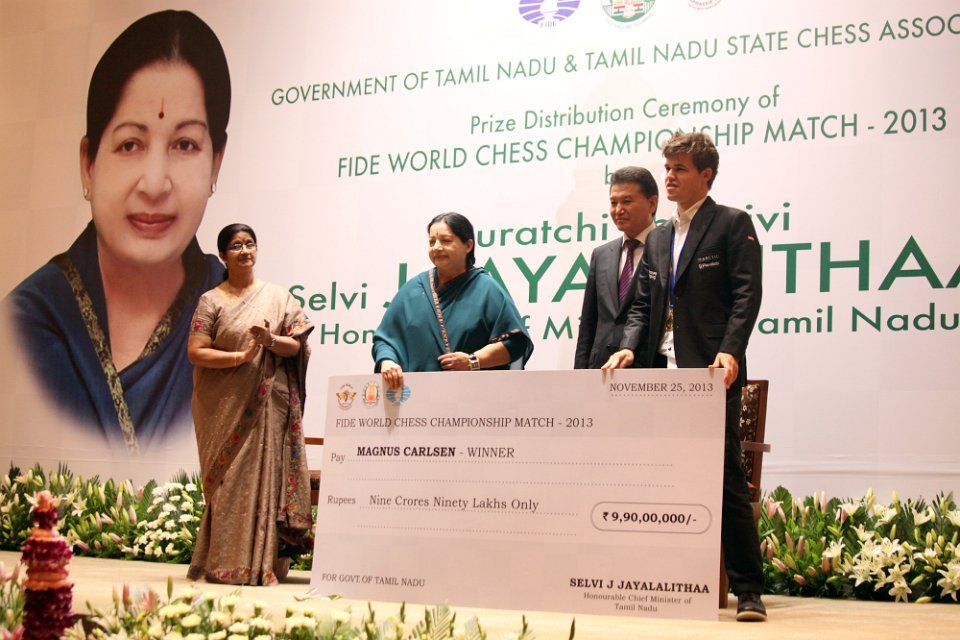 Magnus Carlsen became the world champion for the first time in Chennai and he won Rs. 9 crores 90 lakhs, that is 1.3 million euros.
In the recently concluded match in New York, Carlsen drew the classical leg and had to split the prize fund with Karjakin. But even the total prize fund in 2016 was lesser than what Carlsen received for winning in 2013! 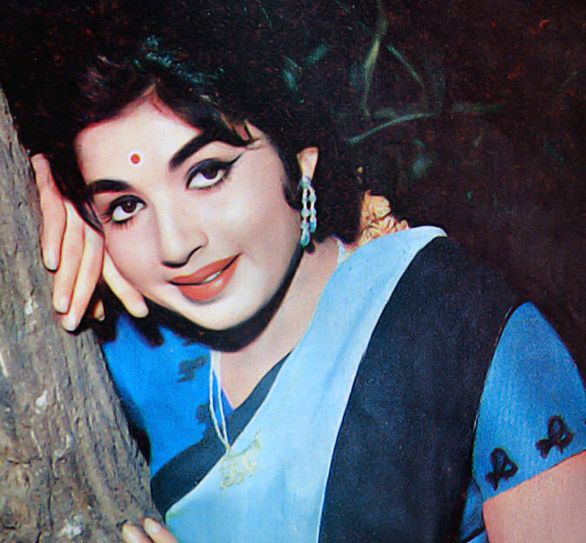 Jayalalithaa was an excellent student and was ranked first in her matriculation exams. She began her career as an actress while still a student. Her first film was the very successful 'Chinnada Gombe'. Superstar MG Ramachandran, popular as MGR, was Jayalalithaa's mentor and acted in many films with her. MG Ramachandran founded the AIADMK. 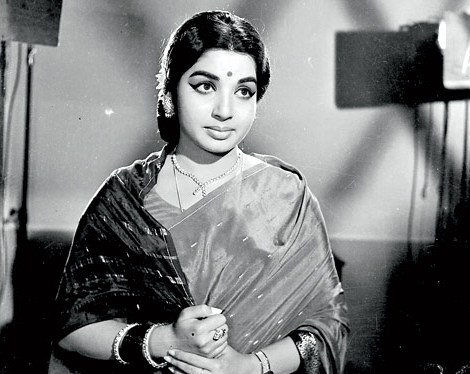 She joined AIDMK and declared herself as the political heir of MGR, taking forward his legacy, staying in the hearts of her people for three decades. 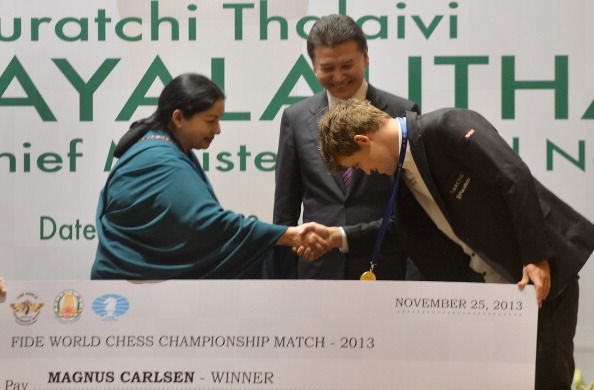 She was an ardent lover of sportspersons and even Magnus Carlsen paid his respect to her. 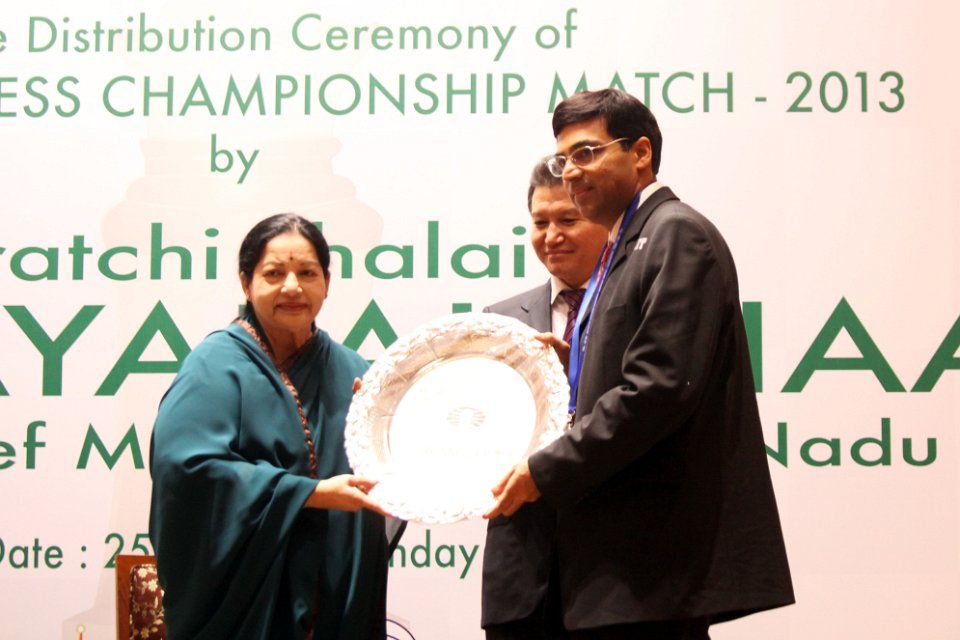 Anand receiving his runner's up prize.

#Ripamma
Peace to her departed soul. Her last days were of suffering & pain . I have met her during my career. Her warmth & respect (1/3)

#Ripamma
to sportspersons was remarkable.In 2012 we were invited to meet her.We had arrived early & shown the waiting room . On (2/3)

#Ripamma
Knowing we had arrived she called us in at once.I was very touched by her gesture. She discussed a wide range of issues. (3/3)