This part of the trip deals with Jacob Aagaard's lectures in Philippines and Singapore. Apart from the training you also get to know more about Asia's first grandmaster Eugene Torre. He shows you one of his best games - win against Anatoly Karpov from 1976. You are also posed with a difficult problem, the solution of which is delivered by Aagaard in the form of a video. So, a lot of training material along with interesting stories, pictures and anecdotes.

At the end of the part I of the Asian adventure I left you at the Suvarnabhumi airport in Bangkok. Our next stop was Manila in Philippines. At one point Philippines was the power house of Asian chess. Eugene Torre, Asia's first grandmaster, was from the Philippines and Vishy Anand when he was young got bit by the chess bug in Manila! In the recent years Wesley So is another gem that the country has produced. With such chess culture imbibed in the people we were looking forward to a great chess lecture. 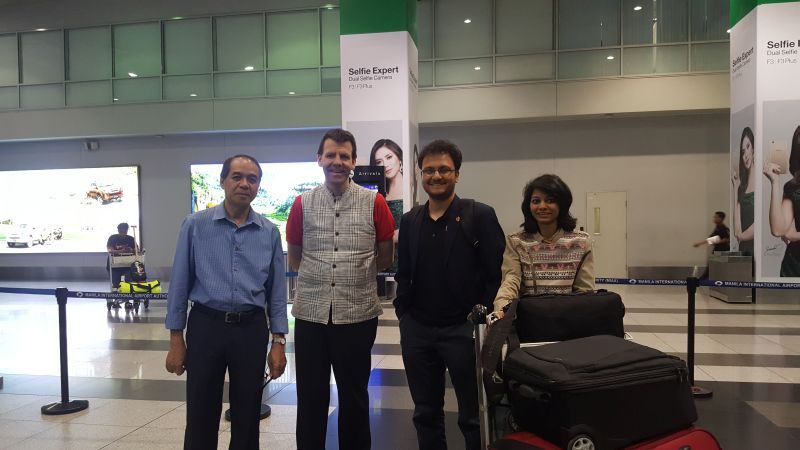 We reached early in the morning at 6 a.m. Eliseo Tumbaga was right there to receive us! In fact he had just finished seeing Wesley So winning the US Championship and had rushed to the airport! 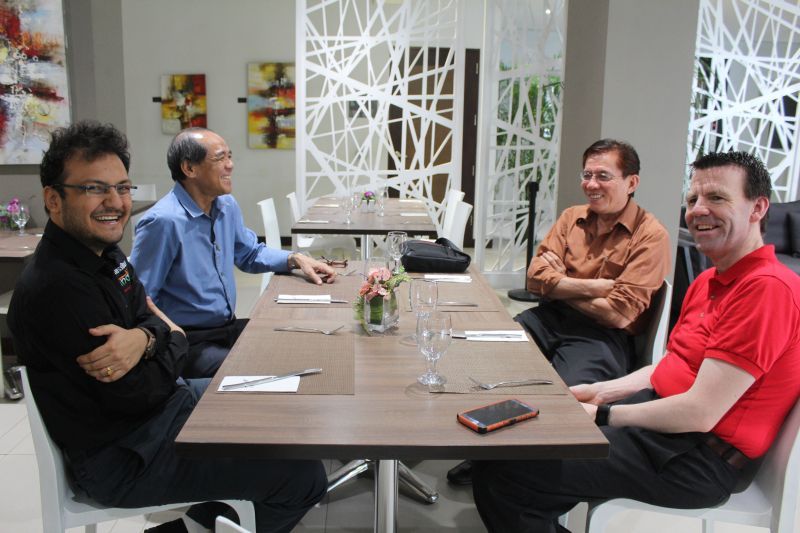 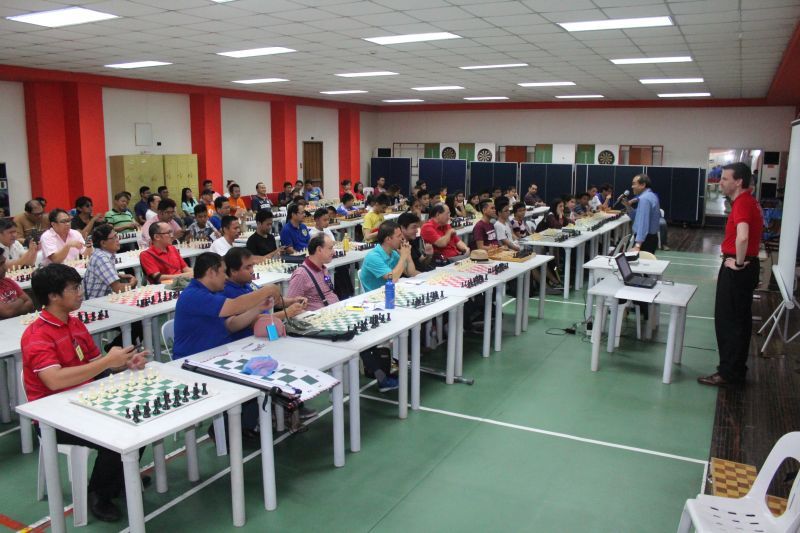 The training session witnessed the participation of nearly 110 players! It was hosted at the Meralco premises. Meralco is the largest distributor of electricity in the Philippines and has supported chess in the country in a big way. 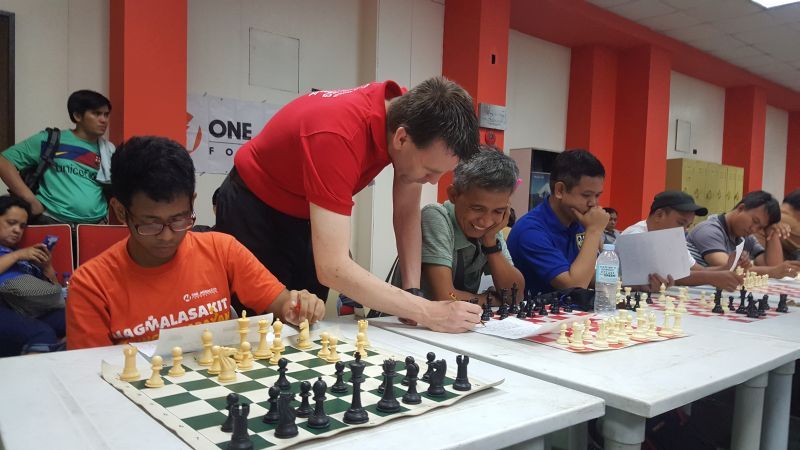 110 people solving chess positions on their individual chess set is a sight to behold! But even better was Jacob moving through them and checking their answers. This personal touch gave people a feel of what it means to have a private training with one of the best trainers in the world. 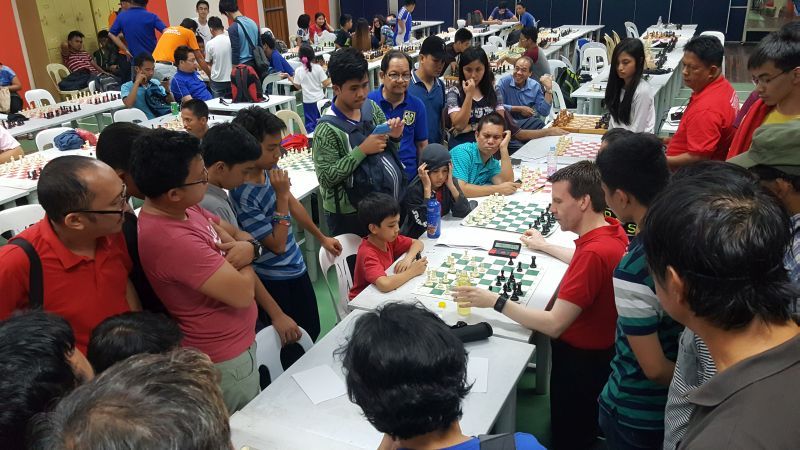 A small boy walked up to Jacob and with a very low voice asked,"Can we play a game of blitz?" I am busy, or we will do it later was the answer he was expecting. However, he didn't know Jacob so well! Aagaard left everything that he was doing and made the boy's day! Some call Jacob unpredictable, I think he is hopelessly in love with the game! 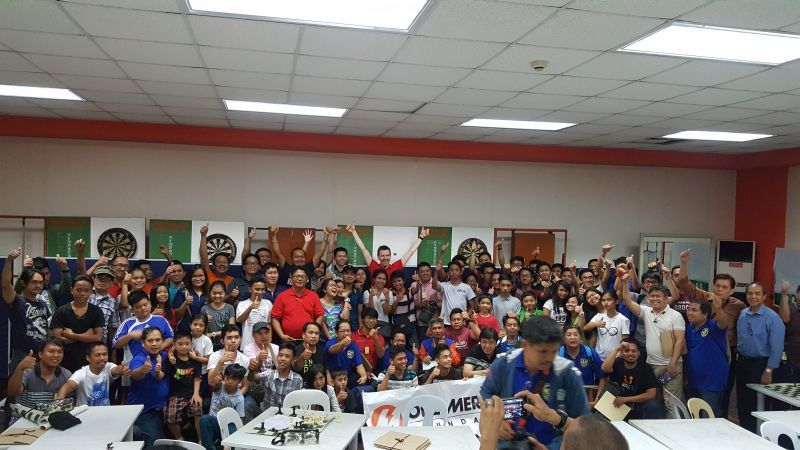 This picture simply captures the mood of the place! 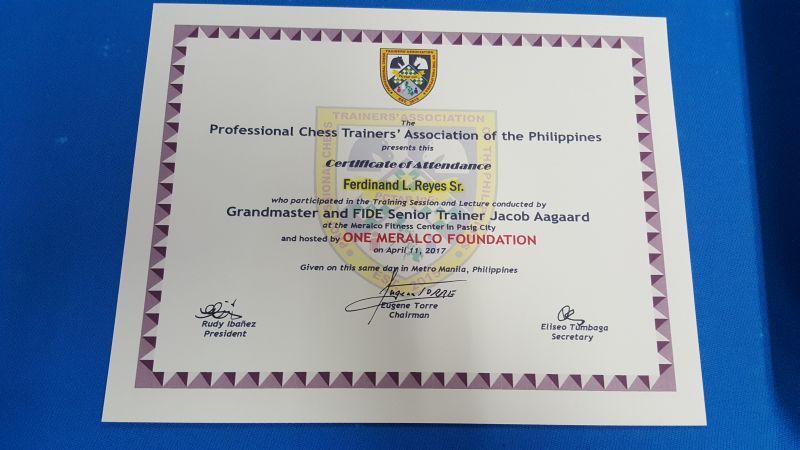 The lecture was organized by Professional Chess Trainers' Association of the Philippines (PCTAP) and certificates were distributed to all the participants.

The PCTAP headed by Eugene Torre (Chairman), Rudy Ibanez (President) and Eliseo Tumbaga (Secretary) is doing some path breaking work in the Philippines. They are holding various seminars all over the country and creating trainers who would spread the game further and teach many more kids. Such work done at the grassroot level would surely make Philippines a hotbed for talented chess players in the years to come. 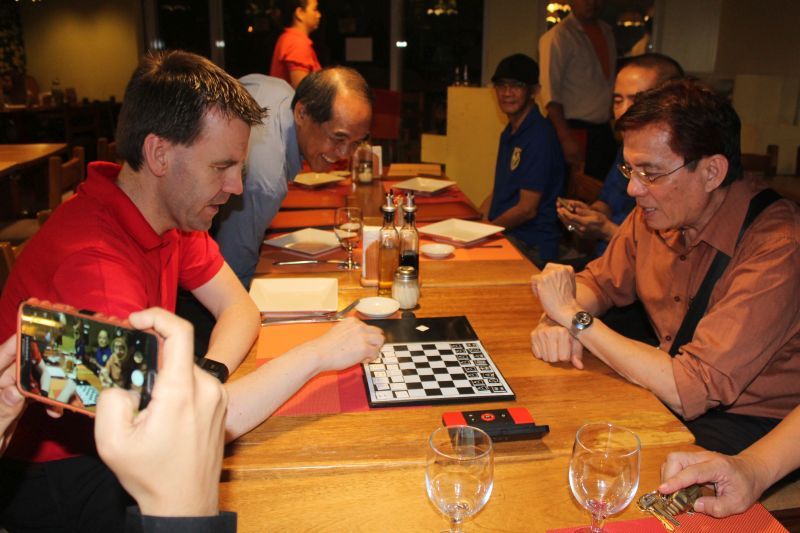 It's an analysis board, but who wants to analyze when you can blitz!

The most interesting thing that I found about Jacob is that he is always switched on, i.e he is always ready for a game of blitz. Any place, any time. And I think this is very unusual for me. When I enter a restaurant after nine hours of training the first thing I want to do is get my hands on the menu card and order some food! But not Jacob!

While sitting down for dinner someone jokingly said why not have a game of blitz. Well, Aagaard took out his analysis board and chess clock, something that he carries with him all the time, and invited Torre to a game of blitz. The result is irrelevant! What stood out was two grandmasters playing a great game of chess and I as a viewer/videographer thoroughly enjoyed every minute of the game. 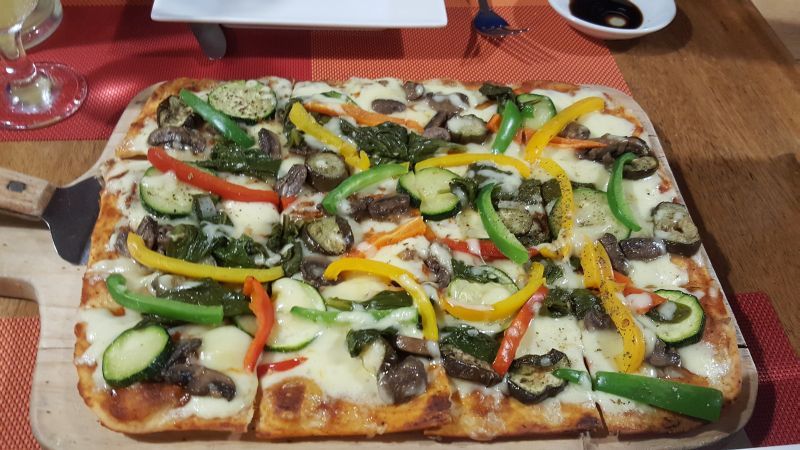 A rectangular pizza followed that blitz game, and that's what I call a perfect dinner! 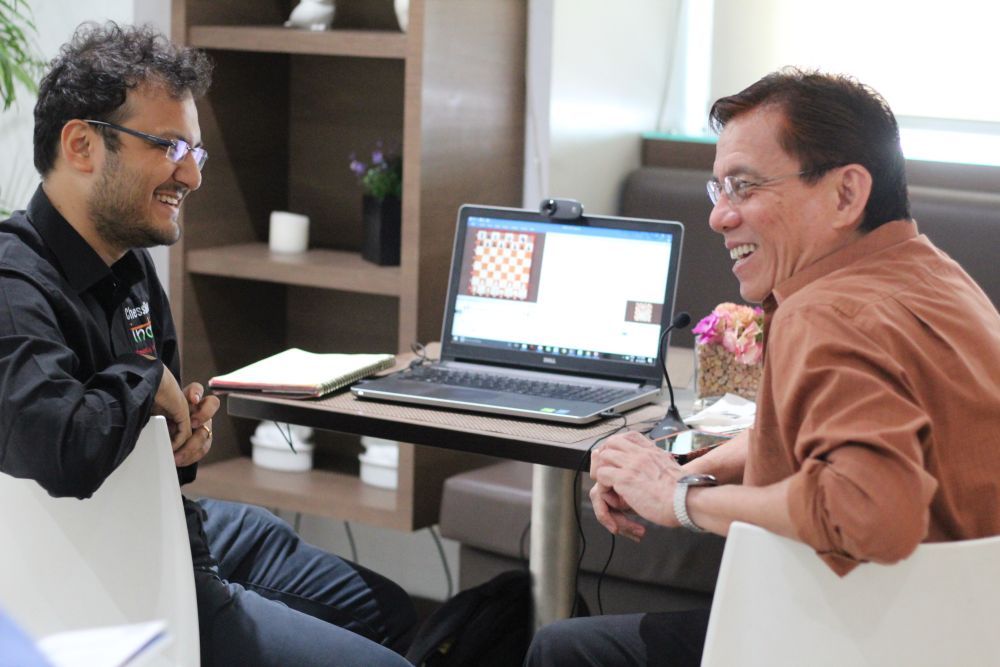 When we arrived at the hotel early in the morning, Eliseo told me that Torre would be joining us for lunch. "Can he come a little early? I would like to do an interview with him!", was my reflex action. Torre agreed and I went back to my room and began preparing for the interview. I realized what an absolute legend the guy is!

Not only is Torre the first grandmaster from Asia, but when Anatoly Karpov was at the height of his powers, he handed the World Champion his first tournament second place in many years. Ever since Karpov had become the World Champion there was no tournament he had not finished first! Manila 1976 changed this and it was because of Torre. It was at that point that people started taking Eugene as a serious candidate for the world title. This game in Manila, 1976 where Torre beat Karpov with the black pieces can be replayed below:

The above game is what we discuss in the 6th ChessBase India show. Eugene Torre tells you about what he was thinking during the game. You can download the show by just clicking the "buy now" button (no charges applicable!) 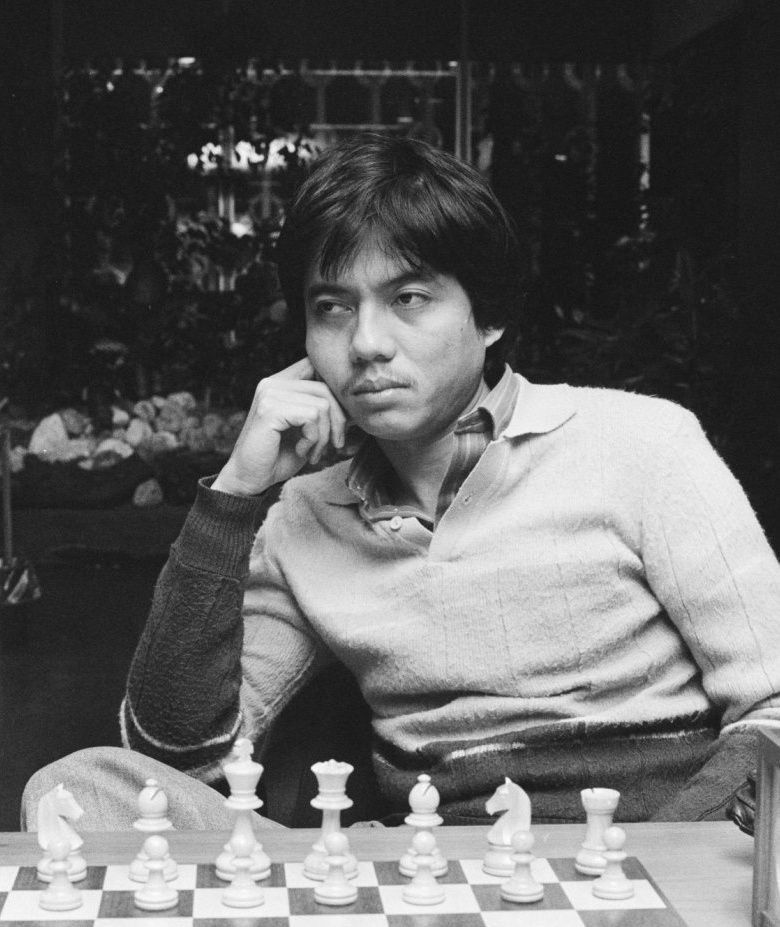 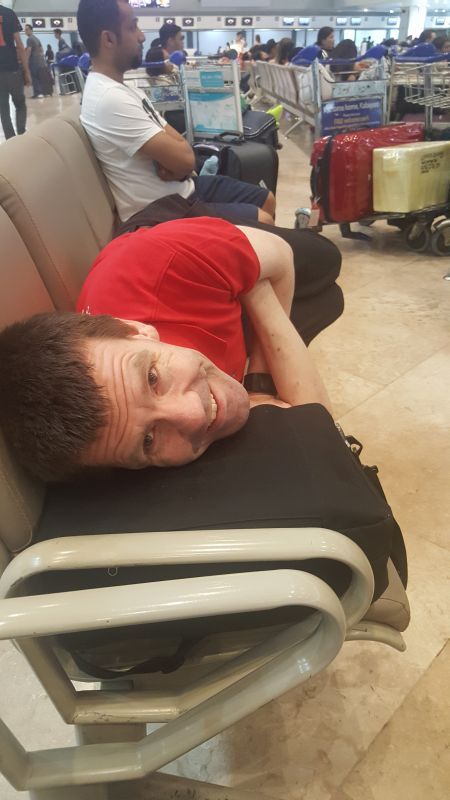 So after a hard day at work, we were back to our bedroom! Yes, that's what the bedroom looks like - An airport! Singapore was next! 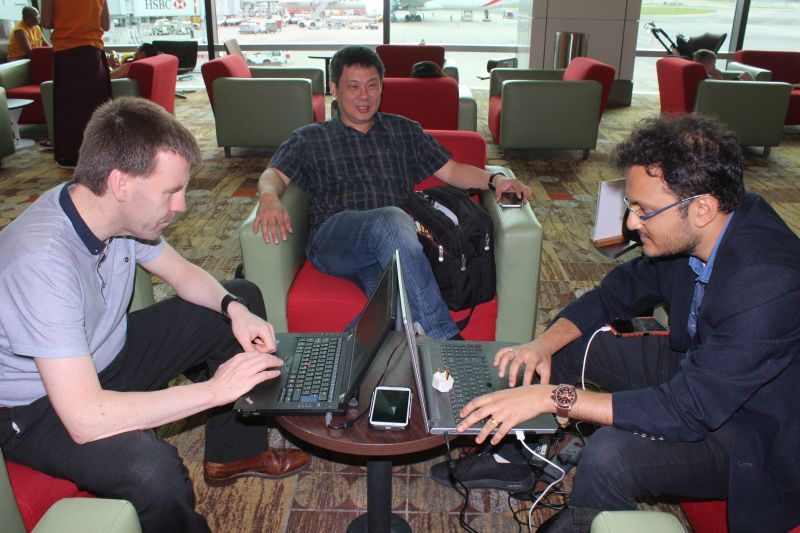 And when we are not sleeping at the airport, this is what we are doing! In between preparing for the lectures, Jacob would be indulging in hundreds of tasks that were pending related to Quality Chess and I would be doing the same related to ChessBase India! Maybe both of us need to learn a thing or two about managing time from Peter Long, who looks so very relaxed in this picture! 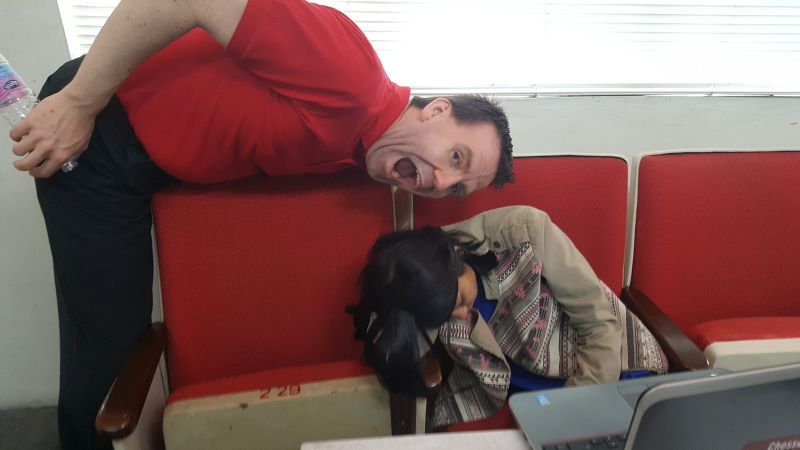 Nothing can disturb a sleeping Amruta! 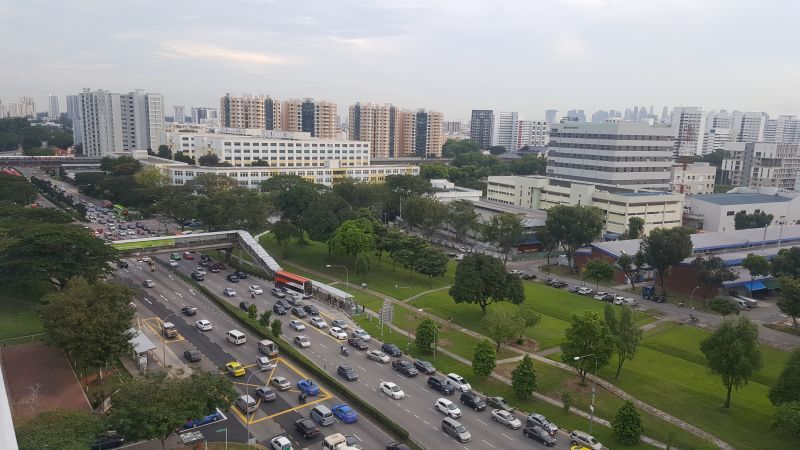 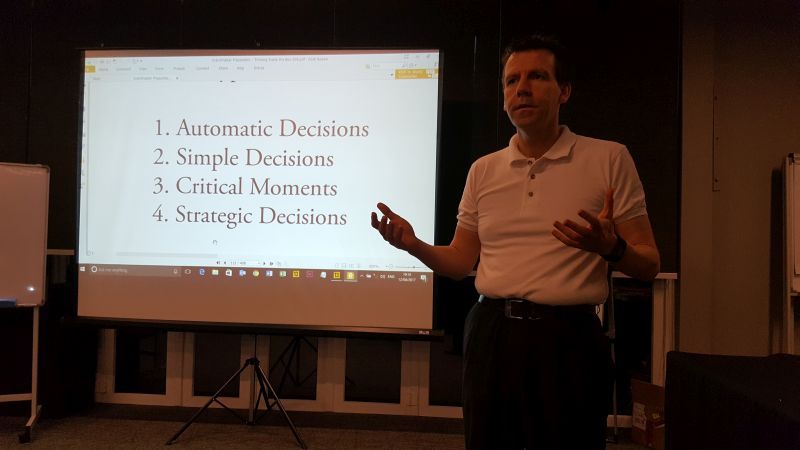 The topic of the lecture was "Four types of decisions" 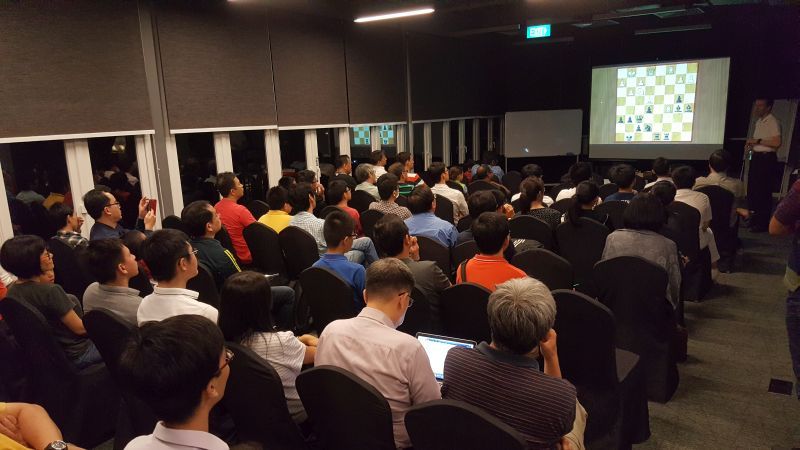 According to Aagaard, Singapore was one of the most receptive audience of the entire trip. The questions that they posed him were very interesting and it helped him to explain the finer points of his four types of decisions theory better. Let's take a very interesting position from the lecture: 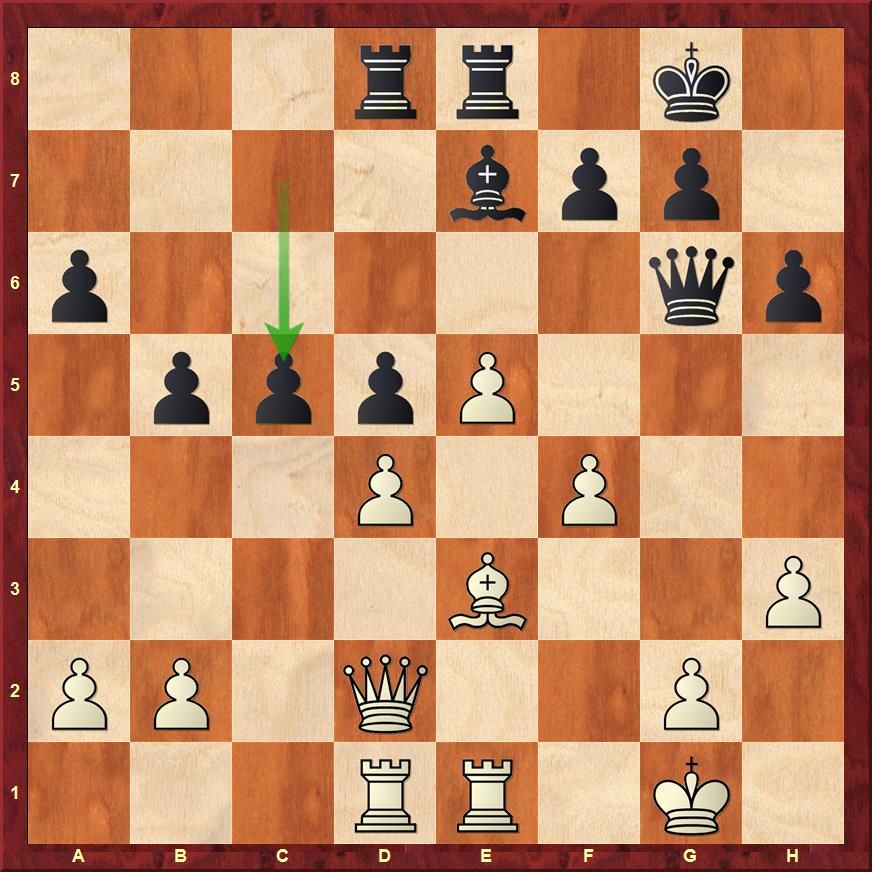 Black has just played the move c7-c5. Your task is to evaluate the consequences of the move dxc5. Make sure that you see the variations in as much depth as you can.

After you have done thinking over the position, let GM Jacob Aagaard explain to you how you can calculate deeply and correctly!

Jacob Aagaard explains the solution to Bruzon vs Sulskis 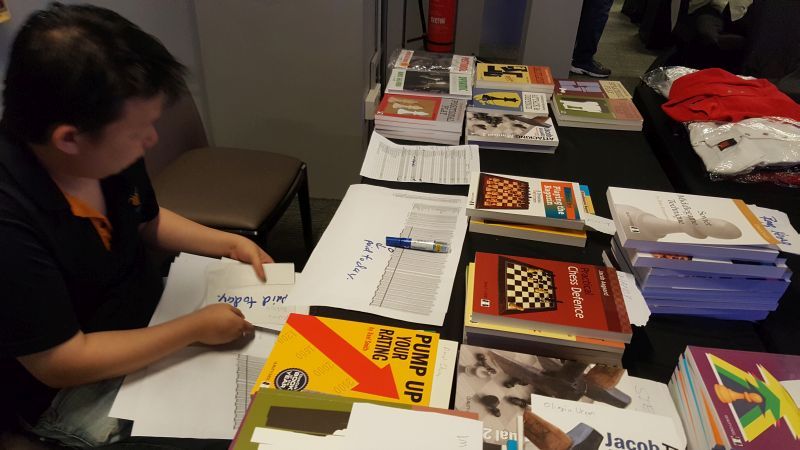 Books were arranged for all the participants at the lecture. It was a great organizational effort where orders were taken days prior to the lecture and books were brought in from the Quality Chess warehouse. Everyone was able to enjoy a hefty discount thanks to the bulk order! 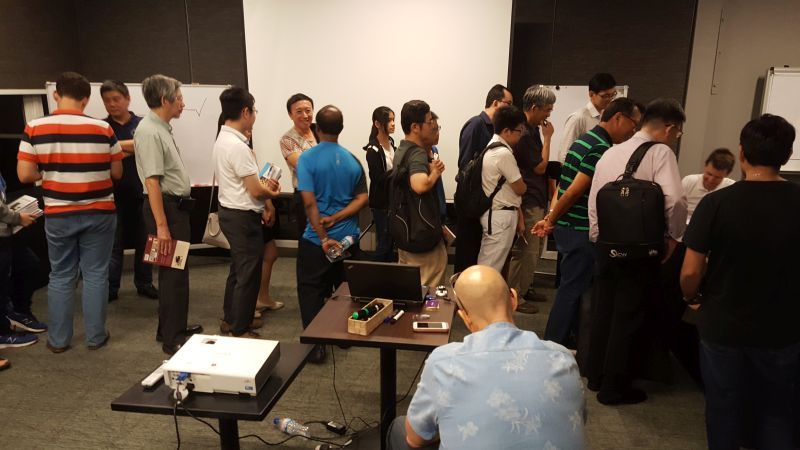 Apart from the discount you also managed to get an autograph from the author! What more can one ask for! 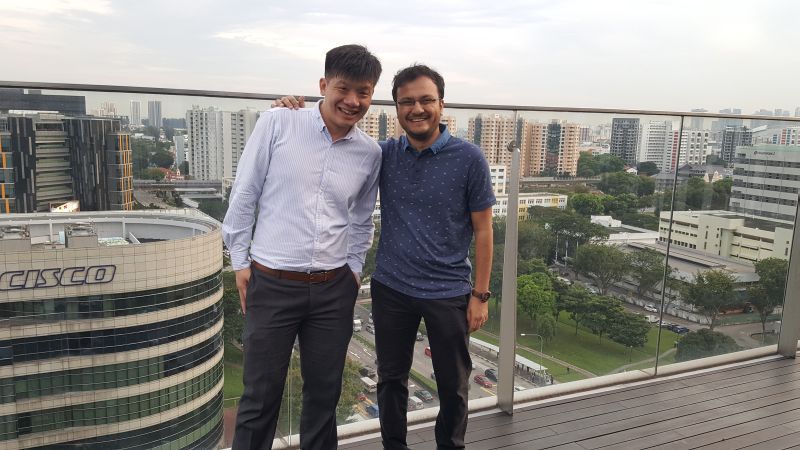 The person who made all of this possible was IM Kevin Goh Wei Ming. In between his job, he spared quite a bit of time for this event and ensured that it was smoothly conducted. Apart from being IMs Kevin and I share more similarities!

Married - check. Married to chess playing wife - check. Chartered Accountants - check. Two GM norms - check! Those are really a lot of unusual similarities! Now Kevin and I have a bet to see who would reach the GM title first. 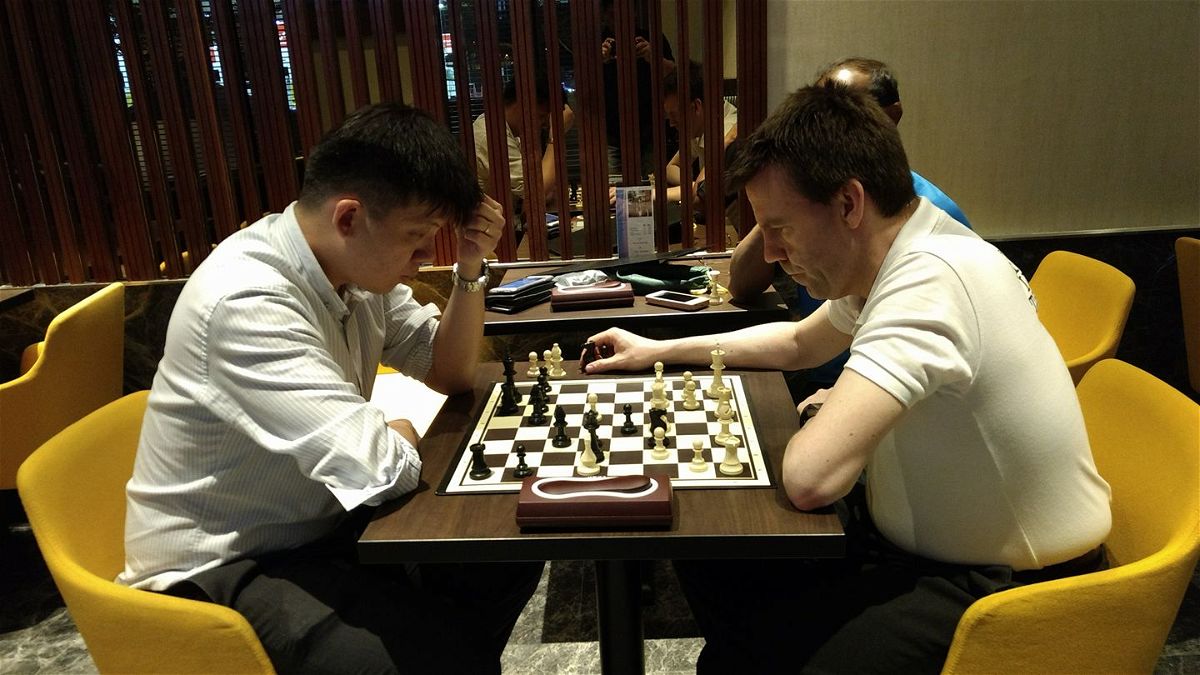 Judging from the way he was playing blitz against Jacob, I have absolutely no doubt that Kevin is going to make it to the GM line before me! Let's hope that happens because continuing with our similarities, I am sure I will also reach the GM title in no time after he does!

You can read about Kevin's take on the Aagaard lecture over here and another one from Junior Tay over here. 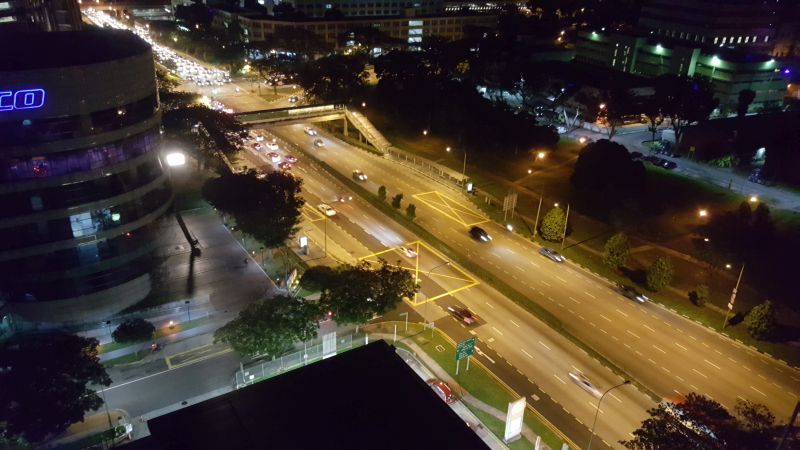 A wonderful evening in Singapore came to an end. Up next Indonesia! 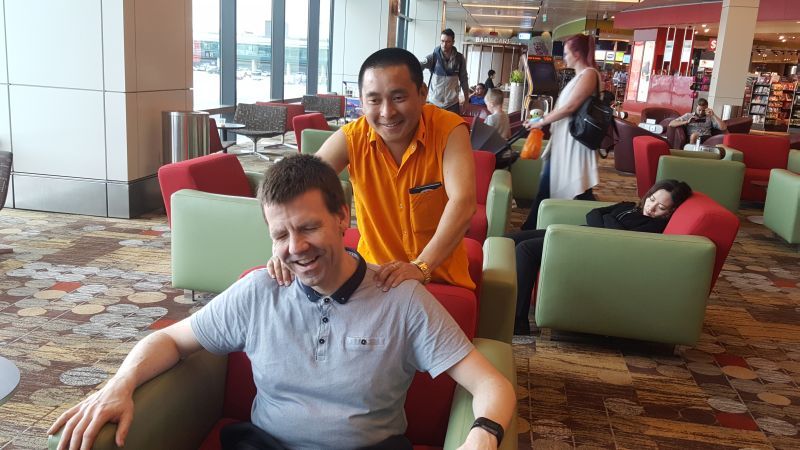 What?! A buddhist monk giving Jacob a shoulder massage! How did this happen?! Well, you will have to wait for the next and final part of this series to read about it.

Previous articles on Jacob Aagaard's trips to India and Asia:

Jacob Aagaard and the magic of Mumbai

Aagaard and the amazing Ahmedabad

Delhi and 48 hours of fun with Jacob

Jacob and joy in the city of joy

Why Chennai is the chess capital of India

Jacob Aagaard and the Asian Adventure - Part I