As the Isle of Man tournament came to an end the tournament winner, Pentala Harikrishna, packed his bags to travel to the World Blitz Championships in Berlin. In between his travel and intense schedule he found time to give us a small interview. Apart from this we have a beautifully annotated game by one of the GM norm scorers from this tournament.

Interview with the Isle of Man winner: Pentala Harikrishna

The 2015 Poker Stars Isle of Man International chess tournament was held from the 3rd to 11th of October 2015. The tournament is slowly establishing itself as one of the most elite event in the chess calendar. This year we witnessed a total of 37 grandmaster, and 25 International Masters, and players from 27 different countries, participating in this event. The top seed was the English grandmaster Michael Adams.

The Isle of Man is a self-governing British Crown dependency in the Irish Sea between England and Ireland. It’s known for its rugged coastline, medieval castles and rural landscape, rising to a mountainous center. In the capital, Douglas, the Manx Museum traces the island’s Celtic and Viking heritage. The Isle of Man TT is a major annual cross-country motorcycle race around the island. [Source: Wikipidea]

The tournament was quite keenly contested right until the end, and India’s Pentala Harikrishna emerged ultimately as the champion, with 7.0/9. He tied for the top honours with Laurent Fressinet and Gabriel Sargissian, but won the event thanks to his better tiebreak score. The schedule of the tournament was excellent for serious players: one round every day starting at 1.30 p.m. local time, and the time control was 100 minutes for 40 moves, followed by 50 minutes for 20 moves, then 15 minutes for the remaining moves, with 30 seconds added per move from the start. Just a few days ago we published a beautiful report on the tournament sent to us by IM Alina L’Ami.

After the tournament was over we were able to get in touch with the winner, Harikrishna, who was all set to take part in the World Blitz beginning within a day. We sent him the questions and Hari obliged us by sharing his views in the limited time he had. 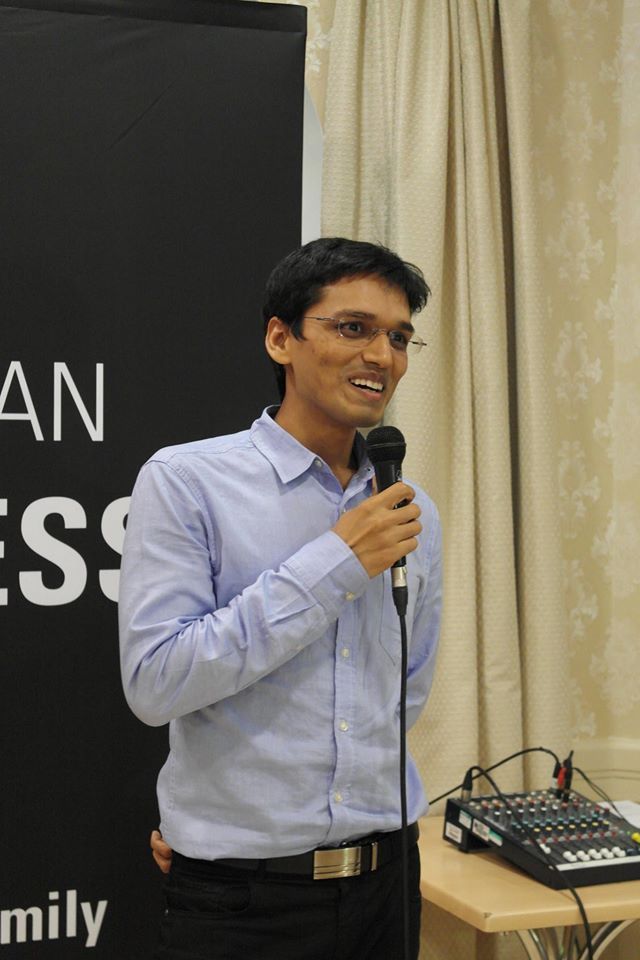 A jubilant Harikrishna at the closing ceremony
Sagar Shah: Hari, first of all congratulations for winning the very strong Isle of Man International chess tournament. Is this performance right up there with the best tournament victories of your career?

Pentala Harikrishna: Thank you Sagar! This is one of my best victories (opens), along with the Biel Open which I won two years ago.

SS: The World Rapid 2015 event clashed with the Isle of Man tournament. Why did you prefer to play in the latter?

PH: I received invitation to play in the Isle of Man couple of months ago. At that time the World Rapid and Blitz dates were not known. It is pity that the dates clashed. It would have been better if they hadn’t. In any case, as I confirmed my participation in the Isle of Man tournament before, I did not want to change anything. 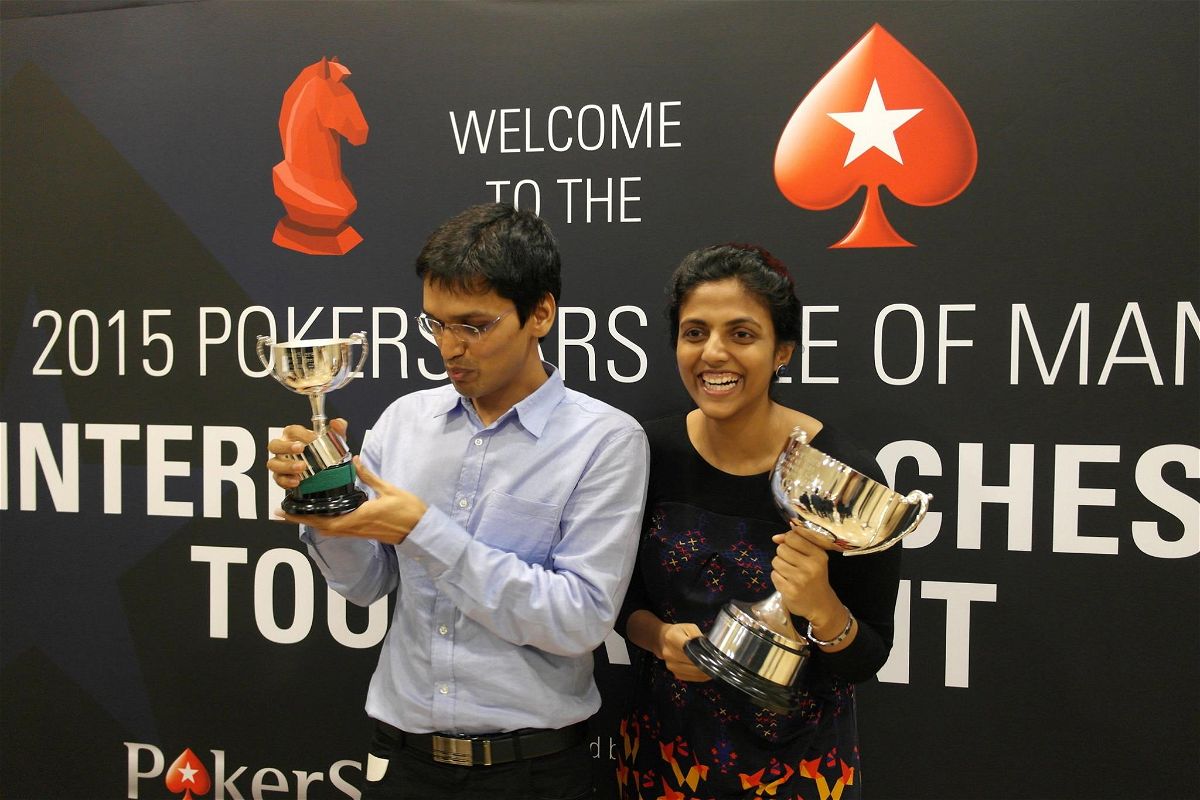 Mine is broken! – Harikrishna and Harika, two stars of Indian chess, hail from the same state of Andhra Pradesh

SS: How was the atmosphere, conditions, and strength of the opposition in the Isle of Man tournament?

PH: The atmosphere was pretty relaxed. The weather was nice this year, apart from one or two rainy days. Venue and conditions were very good. It is already a very strong tournament. In the coming years I am sure that it will have more top players. Had the World rapid and blitz not clashed with it some more 2700+ players would have played this year.

SS: Which was your favourite game from the tournament?

PH: I liked my game against Vishnu Prasanna from the second round. I calculated the line starting with 23. Nc4 until 27.Qxa8 with the conclusion that White having the bishop pair + pawn up is clearly better. 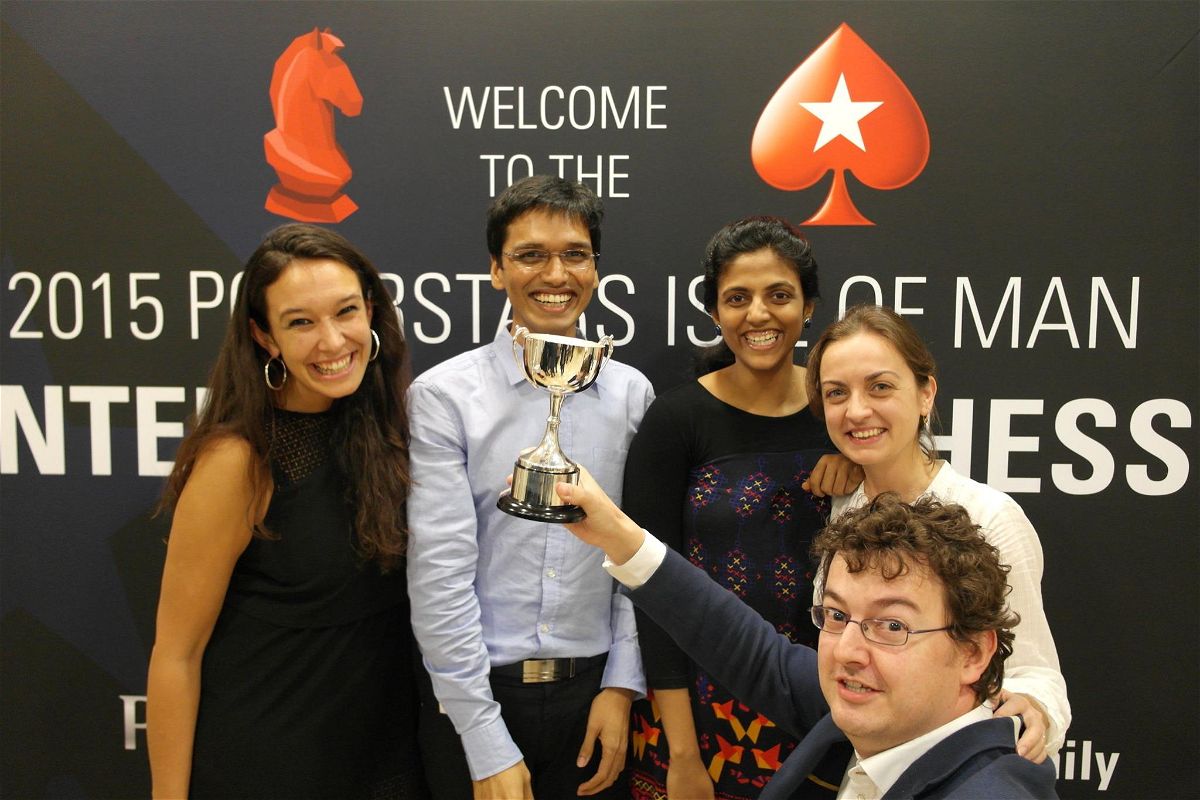 The picture is high on happiness quotient: Antoni Fiona-Steil, Harikrisha, Harika and one the most popular chess couples in the world, Alina and Erwin L’ Ami

SS: In many of your tournaments you tend to serve with both hands. Sometimes 1.e4, sometimes 1.d4 or 1.Nf3 or even 1.g3. But here you stuck to 1.e4 in all the games. What was the reason for that?

PH: I wish I knew the reason! I tend to decide based on how I feel on that particular day. Somehow here I felt like playing 1.e4 and it worked well.
SS: One of the most critical games in the tournament for you was your battle against Arkadij Naiditsch in the seventh round. Let me get your view on two of the critical position from that game: 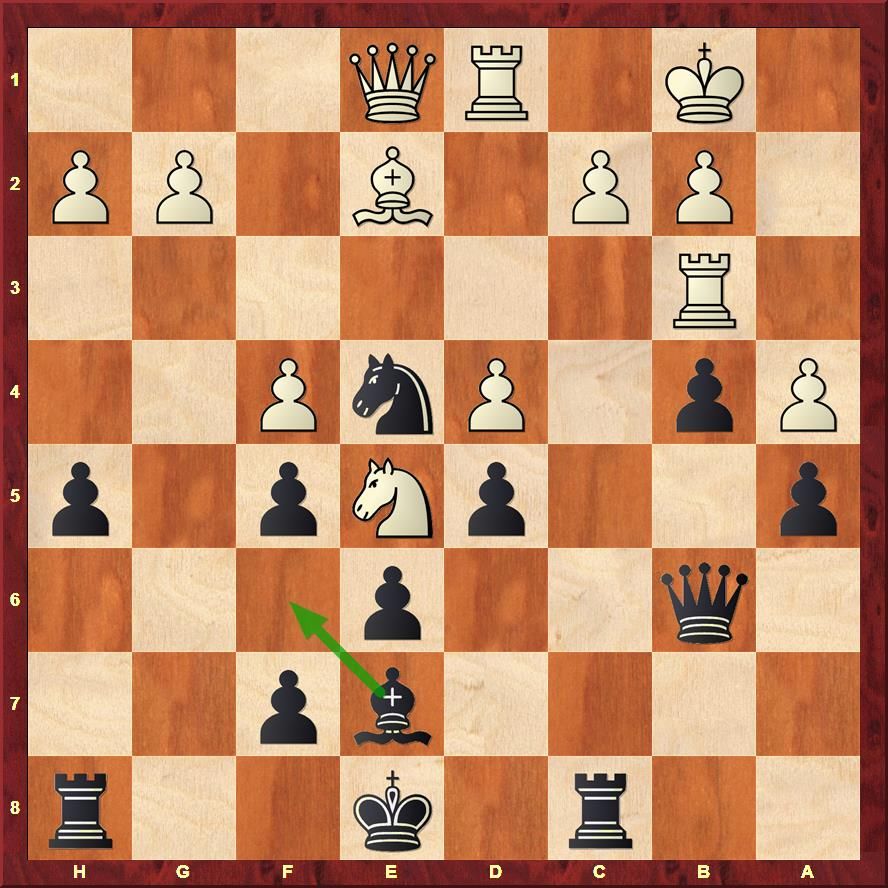 SS: You had a pretty comfortable position out of the opening, why did you choose 25…Bf6 here instead of some simple move like 25…Qc7? 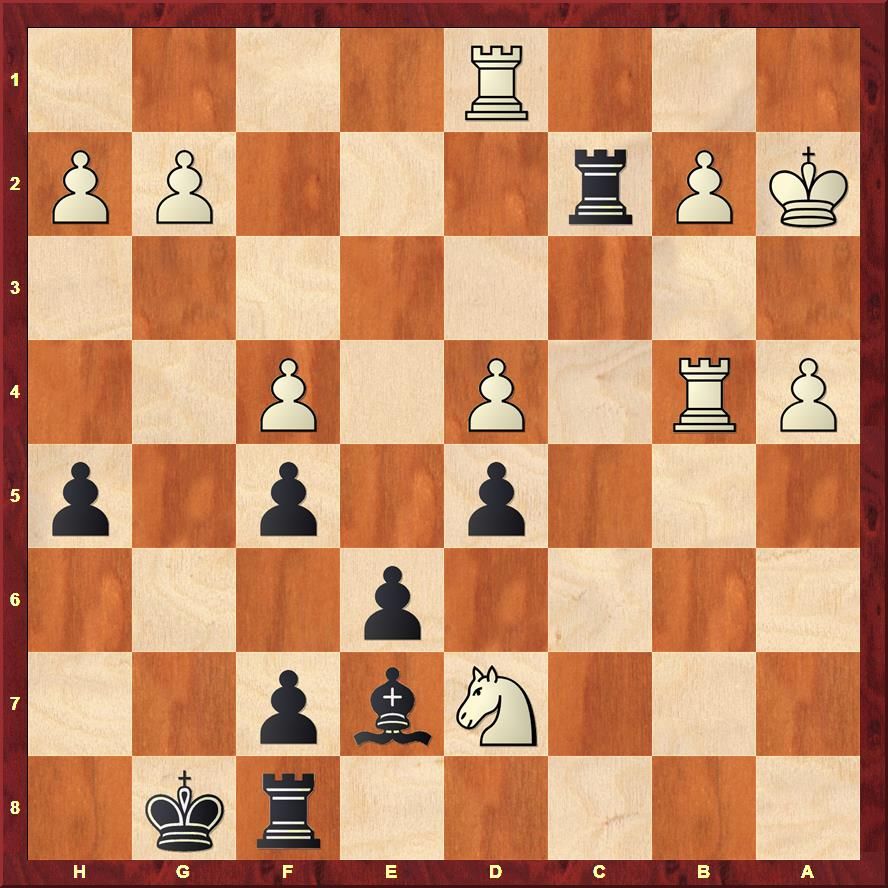 SS: Could you understand on the board that 34.Kb3 would have given you a lost position and what were you planning to do after that move?

PH: After his strong move 26.c3 I had no other choice but to go into this forced line. I thought it was my best practical chance. I saw that 34.Kb3 was strong. I wanted to play 34…Rfc8, but the position is obviously lost. A simple move like 35.Rb8 should be enough after 34…Rfc8.

SS: Would you say this above game against Naiditsch was the luck factor that one requires in order to win a championship?

PH: Definitely there is some luck involved. At the same time I had to think where he could go wrong or else luck would not have been able to help me!

SS: One thing which is not easy to miss in your games is a great feel for co-ordination and harmony. More often than not your pieces end up on good squares. Also your endgame technique of converting minute advantages is just phenomenal. How are you so good at both these things?

PH: When I was young my trainers were positional players. They taught me which piece should be put on where. As for the endgame technique, I think one has to study it from a very young age to be good at it.

SS: How was your experience playing Poker and how did you do in the poker tournament? 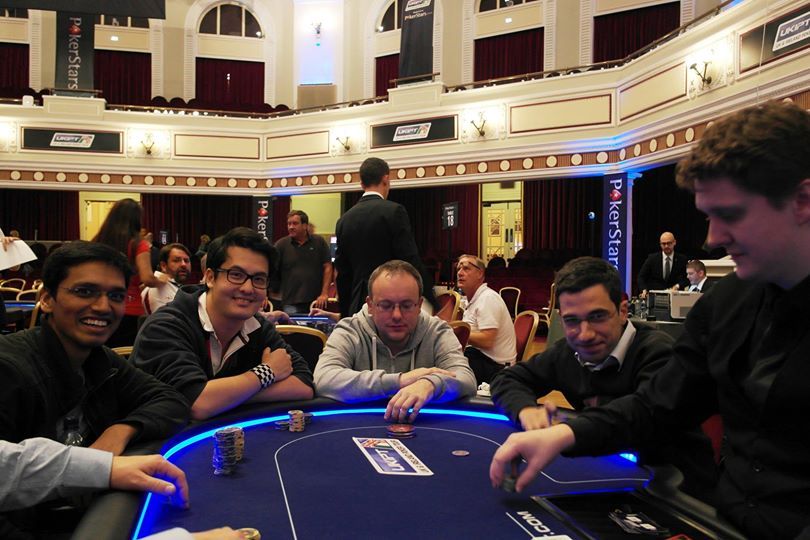 PH: My first experience with poker was playing online. The Late GM Vugar Gashimov taught me a bit and we used to play for fun. I mean we used to play some blitz and then poker. This was around six to seven years ago. After that I never played poker till I came to the Isle of Man. At first I thought I won’t last for long. But before the poker session began I got some nice advice from Michael Adams. He mentioned that he survived last year until the last table by folding at the right moment and not playing all hands. I followed that and finished sixth and even won a prize! This was my first poker tournament. It was fun playing combined chess + poker event!

[Ed: the chess + poker event was a unique event merging the two games. There were three prizes in chess and six in poker. First all players play a blitz tournament consisting of six rounds of chess. Every point you score in chess translates into 1000 extra chips in poker. Hari finished fourth in chess so didn’t get a prize, but he scored 4.5/6 – which meant that he earned 4500 poker chips in addition to the 7000 basic chips. So he started the poker session with 11,500 chips. On the other hand the winner of the poker tournament, Kenny Chih-Hung, only scored 1.0/6 in chess and got 8000 chips at the start of the poker session. But Kenny is a professional poker player, and even with less number of chips was able to beat GM Michael Adams in the poker finals and win the title. Adams, as the runner-up, won £1165, Harikrishna finished sixth and went back home with £345.] 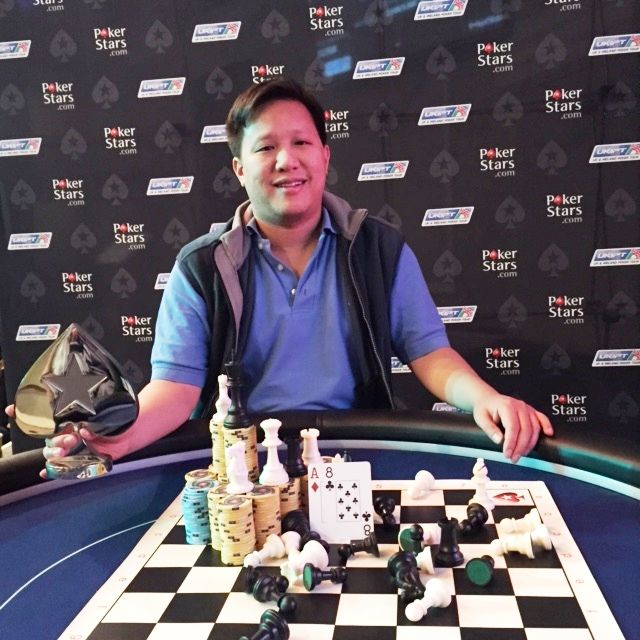 Kenny Chih-Hung, is a poker pro from USA. He won the 2nd edition of the poker + chess combined event and was richer by £1680.

PH: For me the title is more important!

SS: And finally, what is your aim in the World Blitz starting from tomorrow? 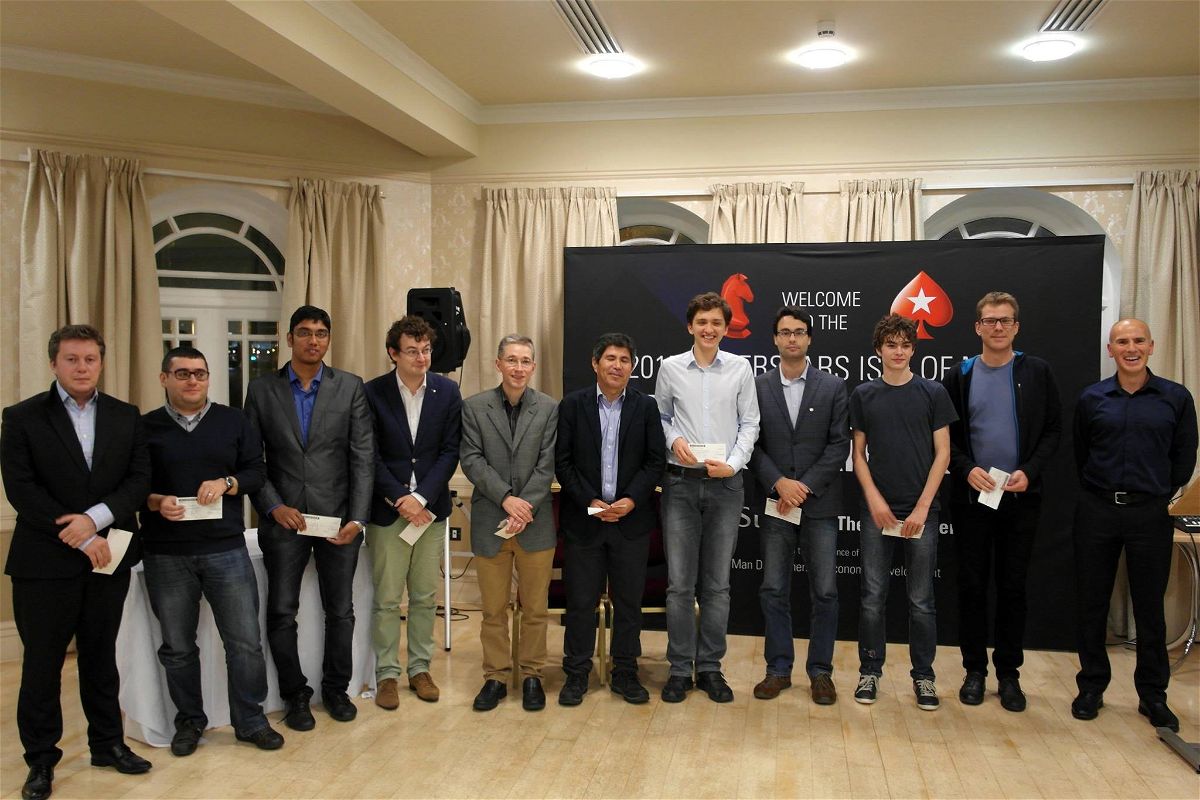 It is quite a success for the organizers if many players achieve their norms at their event. While rating gained or prize money earned is ephemeral in nature, winning a norm is permanent and helps you to achieve the elusive titles of grandmaster and International Master (also WIM and WGM). In the Isle of Man seven players were able to make their norms. Alan Merry, Thorben Koop, Pier Luigi Basso made their IM norms while Yuliya Shvayger made a WGM norm. The three players who made their GM norms were: 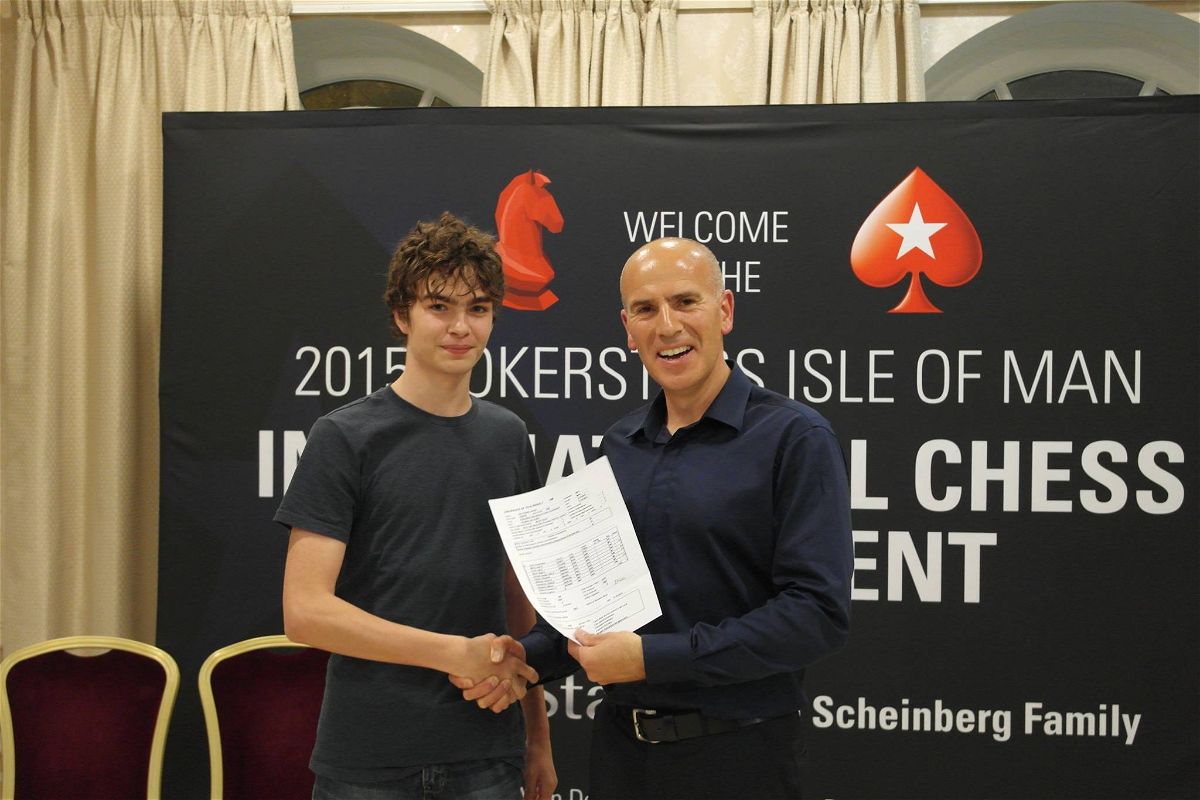 Jorden van Foreest receiving his GM norm certificate from the tournament director Alan Ormsby. Jorden, who has already completed all his formalities for GM title, proved that he is grandmaster material by scoring 6.0/9 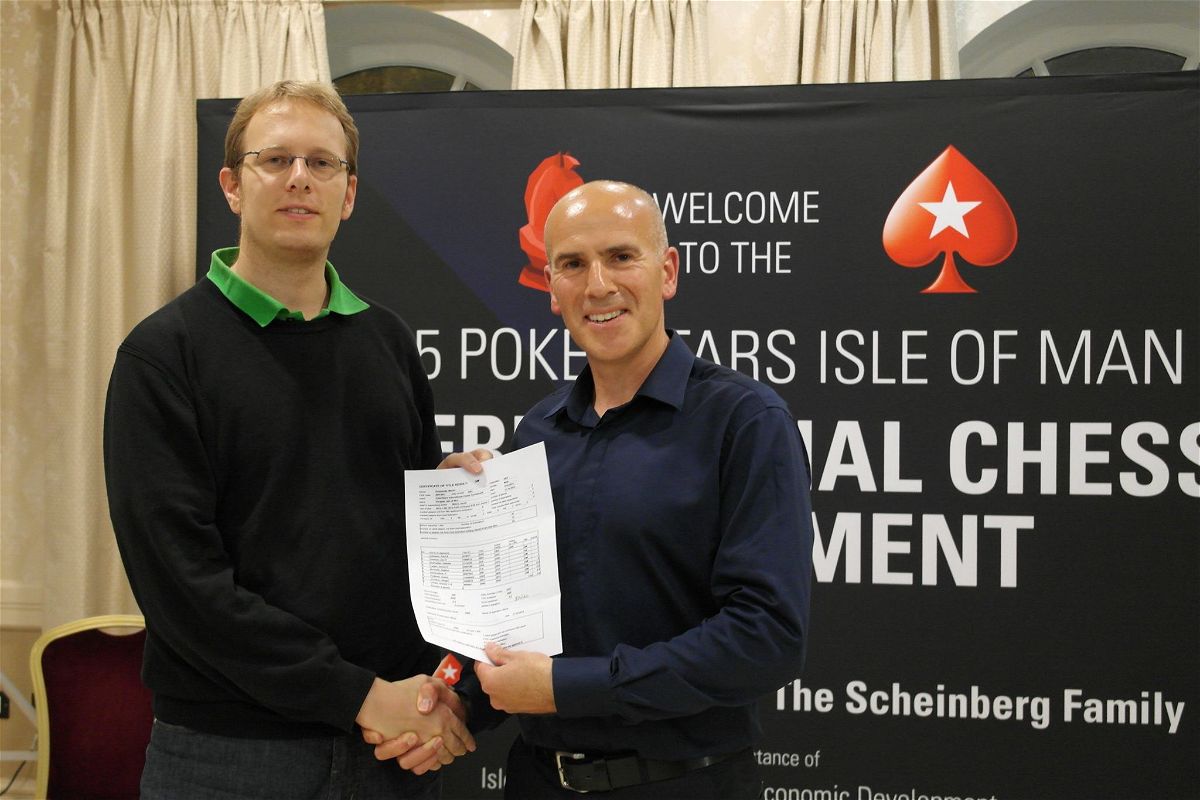 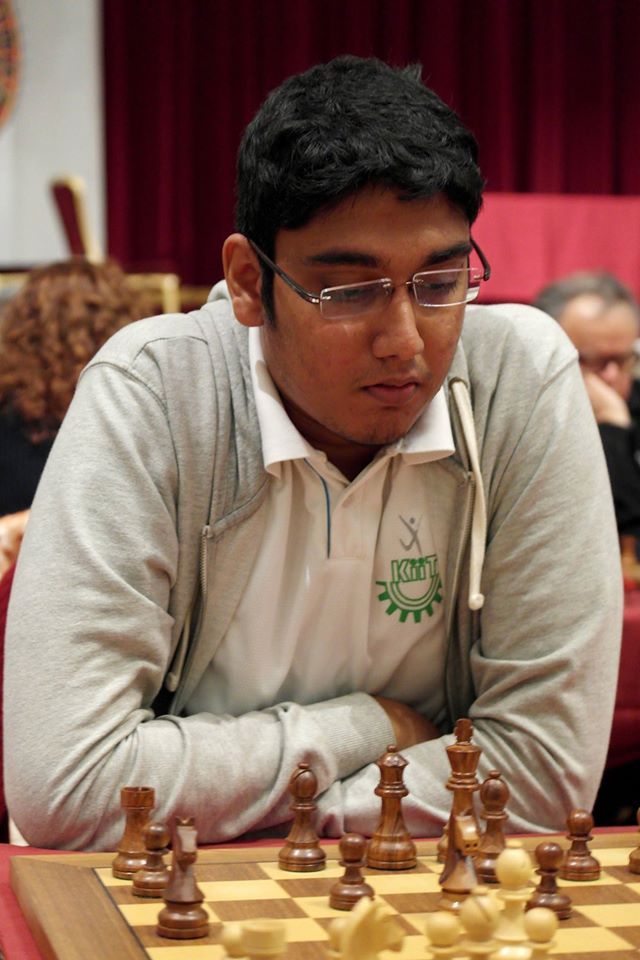 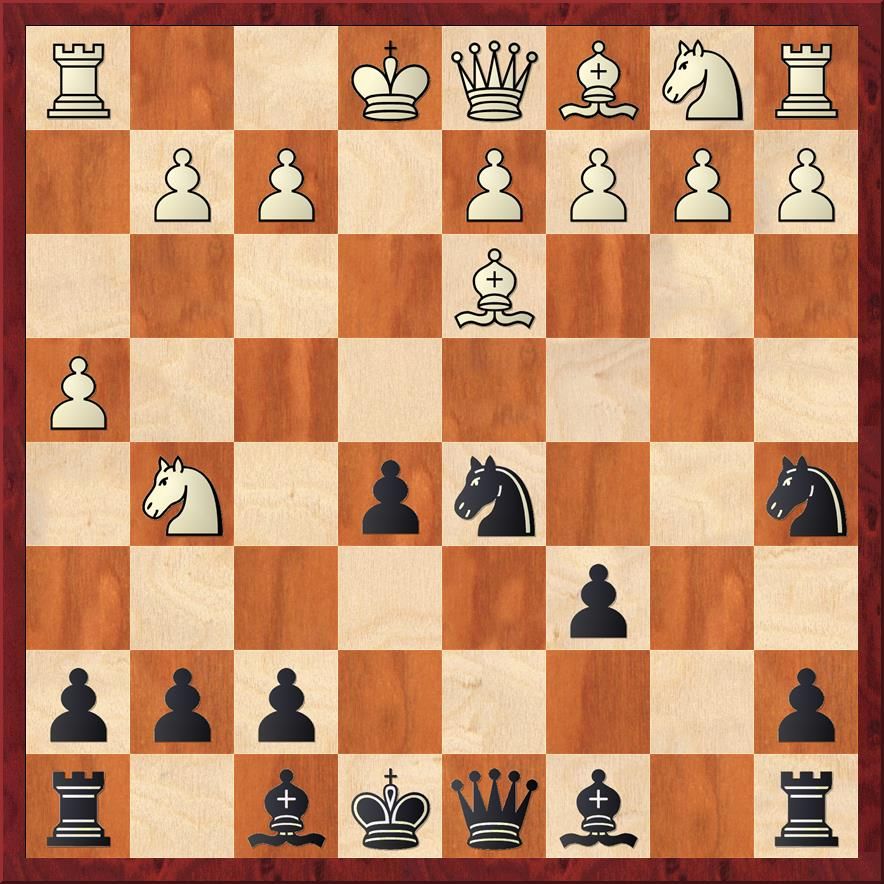 The above position that was reached in the game between Jan Timman and Swayams Mishra has been analyzed quite deeply by the Dutch GM Erwin L’Ami in the latest ChessBase DVD entitled “The modern two knights.” In her review for this product IM Nisha Mohota writes about the diagrammed position:

A couple of months back a friend of mine who happens to be a strong GM had mentioned that 9.h4 is a line which deserves a lot of analysis by both sides. I had stored this piece of information in my mind but was never able to devote time to the variation. When I saw this DVD and found ready-made analysis by a strong GM, I was very happy! However, I had my doubts. The line looked really double edged and I was sure an active player like Erwin must have withheld some useful analysis, so some of the evaluations could be misleading. I spent a couple of days trying to find a flaw in his analysis. I failed. The variations given have the precision of computer calculation and the right evaluations of a strong human! The analysis is of extremely high quality and most importantly it leads to positions with a lot of material imbalance, so it is not easy to assess. Erwin’s guidance in these tough-to-evaluate positions is of great importance. Had I worked on these positions on my own, it would have taken me more than ten days to come anywhere close to the analysis provided, and I am not sure I would have figured out the positions correctly.

You can buy Erwin L'Ami's DVD from the ChessBase Shop 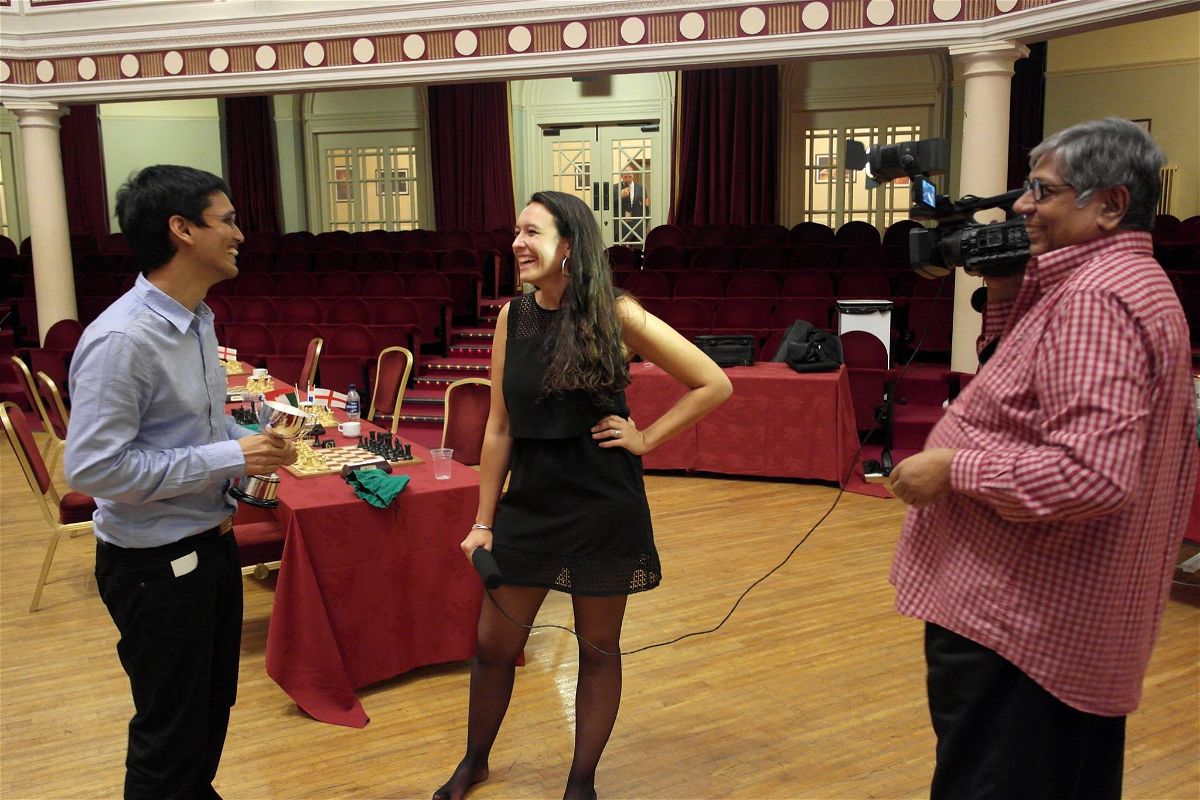 You can read some very nicely crafted articles written by Fiona on the official website. She has also captured wonderful pictures which can be viewed on the official facebook page of the tournament.

Vijay Kumar is a legendary videographer who is present at many of the elite events. He sends us excellently edited video reports with interviews of top players. Below you can find the video of the closing ceremony. In order to see other round videos you can visit the Youtube page of the Isle of Man tournament or Vijay Kumar’s official youtube channel where you can find thousands of videos from top tournaments like Shamkir, Zürich Challenge, Qatar, etc.