I will go to Iran as a chess player and just play chess!

Ju Wenjun won the tournament in Khanty Mansiysk and with it the overall women's Grand Prix as well. This gave her the right to challenge the World Championship winner in Tehran 2017. ChessBase India's Niklesh Jain got in touch with the women's world number two and asked her questions not only about her Grand Prix victory, but also about the hijab controversy, Hou Yifan's decision of pulling out and her personal ambitions in chess. 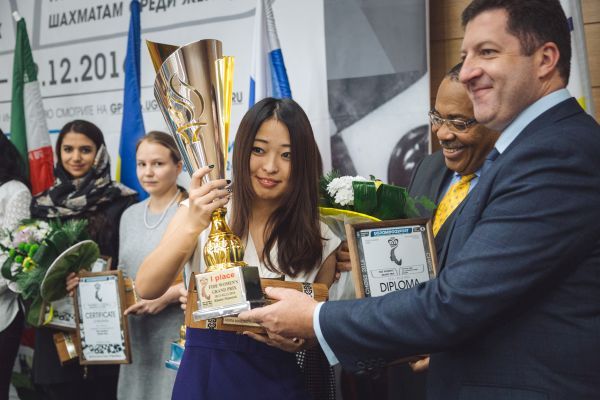 Niklesh Jain: Ju Wenjun, Congratulations for this big win! You are now a World Championship Challenger. How does it feel? And what does it mean to you?

Ju Wenjun: Thank you! I feel pretty good. It is a remarkable result. One step closer to my dream and no doubt I will fight for becoming the World Champion.

How tough was the Khanty Mansiysk Women’s Grand Prix?

So far the toughest tournament in my career. I was stressed, especially in first six games. I even could not remember the line I had just prepared in the morning before the game. I was back to normal in my last five games. I did what I like doing the best - just play for pleasure. 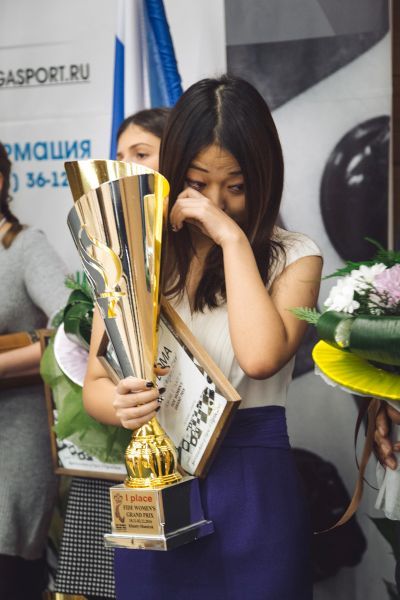 Tears of joy on winning a really strong tournament

How did you approach this tournament? On one hand getting 90 points was enough to surpass Humpy Koneru in the Grand Prix standings, but on the other there were players like Gunina, Kosteniuk, Harika who could have won the Khanty Mansiysk Grand Prix and taken the top spot.

There were many possibilities. Many players had a chance to win the Grand Prix. I managed to score 7.0/11, that's +3, which was a good result. It was not easy, but the good thing is that I didn't need to fight too hard.

You drew the first round against Zhukova and then won against Javakhishvili. With 1.5/2, you slowed down a bit and made three draws. And then you lost the crucial sixth round against Alexandra Kosteniuk. What was going on in your mind at that point? How did you fight back?

After I lost to Kosteniuk I was back to 50%. If I wanted to win I had to score four points out of the remaining five games. That's a very difficult task to achieve, especially because I hadn't played well in the first six games. After the loss I was quite upset. One of my friend suggested me to watch a comedy movie. I watched it and felt quite relaxed. Next day I prepared as usual and luckily won the game! Ju Wenjun was quite depressed with her loss against Kosteniuk. Only a funny movie could turn her mood around!

Yes, you won your next game against Valentina Gunina in style. Did you know that you were following the game Swinkels against Sasikiran? 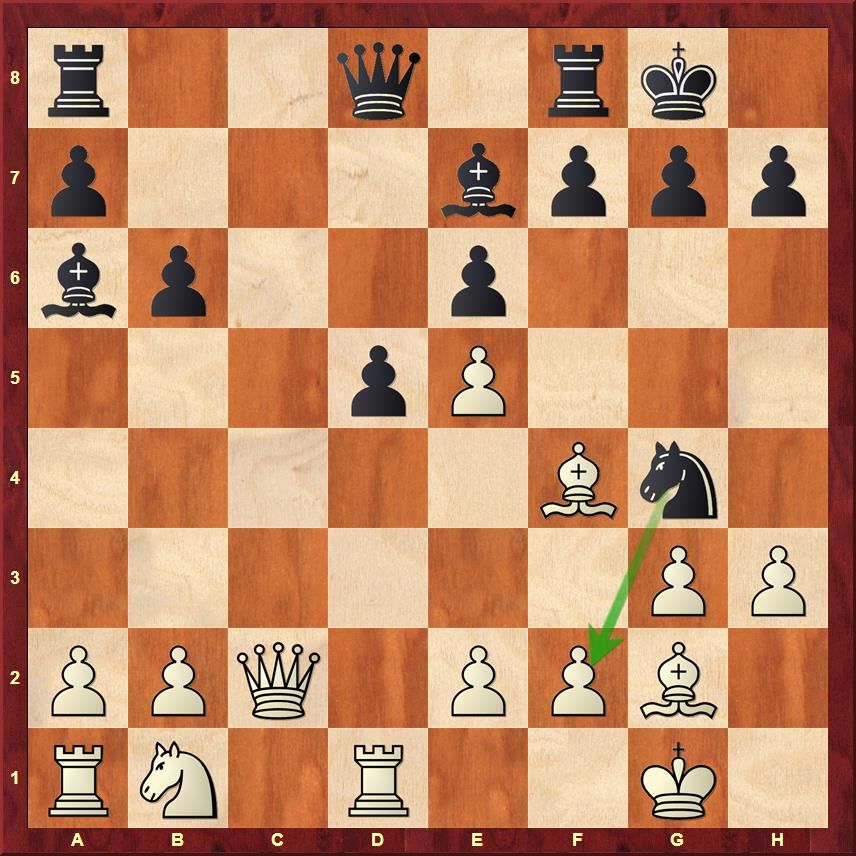 Gunina went for the 14...Nxf2 sacrifice which was calmly refuted by Ju Wenjun

Well, I know Sasikiran played it. I didn't prepare this before the game. When Valentina played this line, I was surprised, but did not fear it. I believe that if White plays well, it is Black who has to fight for a draw.

Did it come to you as a surprise that your eighth round opponent Almira Skripchenko did not turn up or were you aware that she was not going to play the round?

I took the bus and went to the playing hall. It was like 20 minutes before the game when I was told that she may not come due to health reasons. It was a pretty gloomy feeling. The win does help my tournament standing but I felt different from all the other players who were fighting it out. You could say that I was happy and sad at the same time. 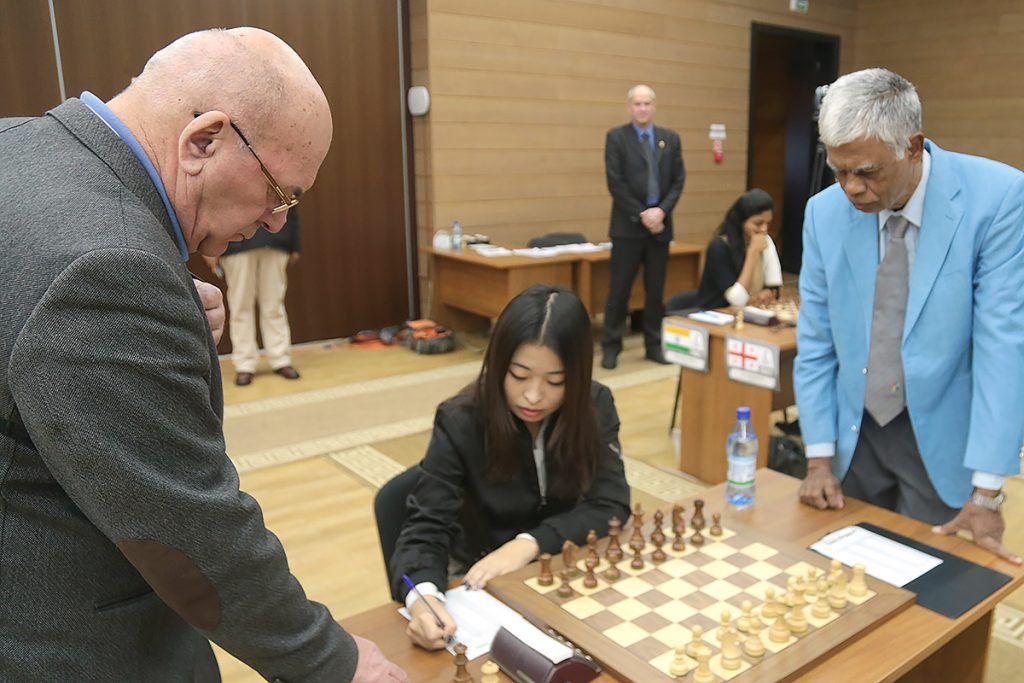 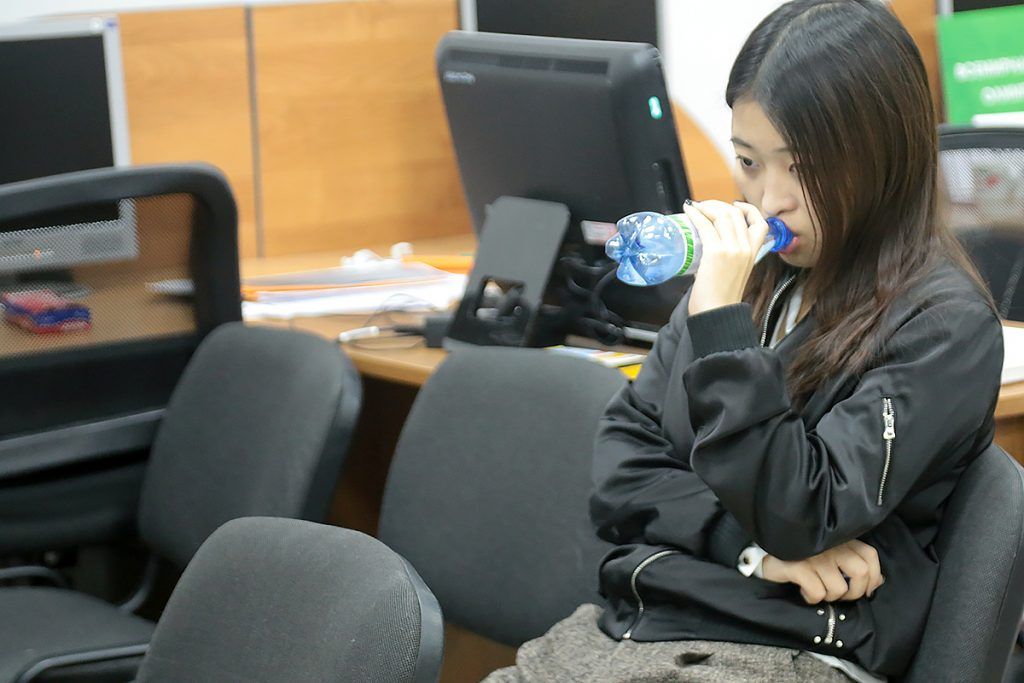 A walkover is a free point, but the thrill of winning the game doesn't exist

The game against Nino Batsiashvili in the penultimate round was perhaps the most important game of the tournament for you. Were you already relaxed that you had scored two wins against Gunina and Khademalsharieh, or you wanted to win at all costs for a first place finish?

The game against Batsiashvili was my favourite. After I won this game I became the winner of the Women's Grand Prix, which was a big relief. And as it was 30th of November, I got to see the Rapid Playoffs of the World Championship Match between Carlsen and Karjakin as well!

Overall I wanted to score one point out of two. As I had the black pieces against Nino I wanted to play solidly. But she started to play double-edged chess and that gave me the chance to play for a win! 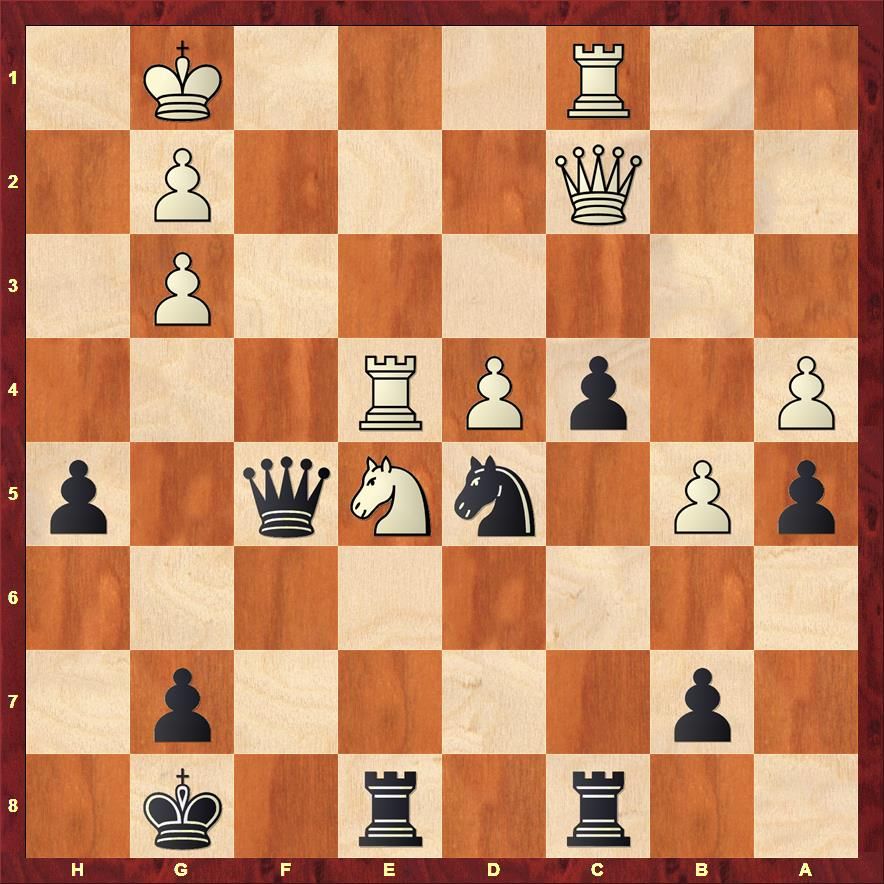 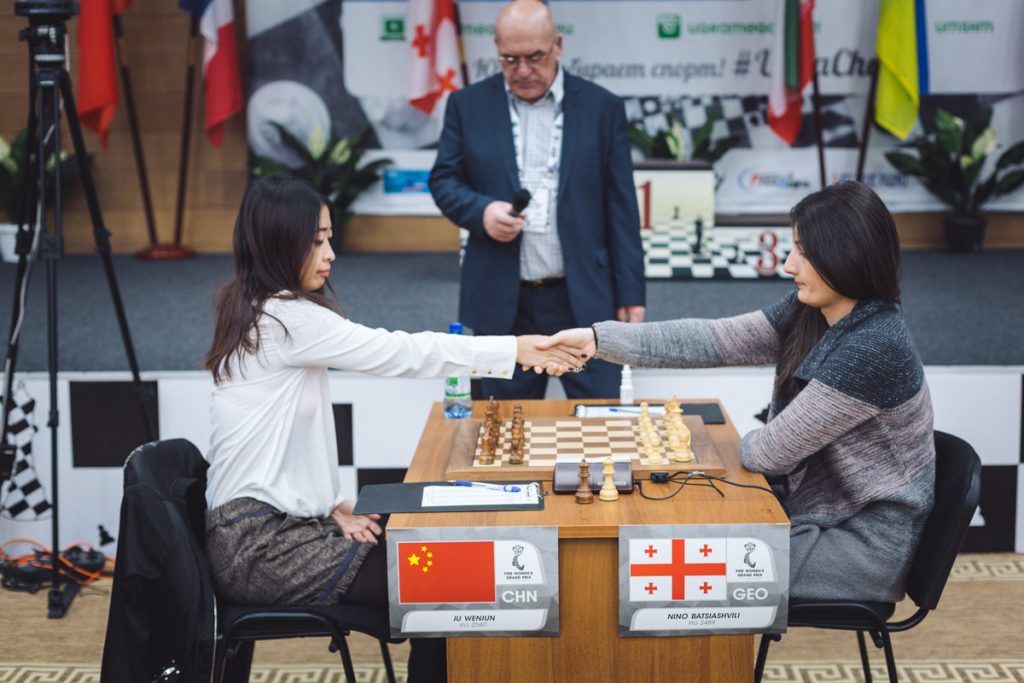 The start of the game that gave Ju Wenjun the biggest victory of her chess career!

After drawing your game with Pogonina, you won the tournament. Not only that, you also become the World Championship challenger. How did you celebrate your victory?

After my victory I went to Shenzhen to play in the Chinese League for team Shanghai. Along with it I also promoted chess in schools with other players. I just came back home and will now think about how to celebrate! Meeting my friends looks like a good idea. I will also go to the gym, because I like working out!

Who is your coach currently?

I would rather not reveal that! Well, what can I say, a secret makes a woman woman!

No, it will not reduce my motivation to perform my best. I want to do all that I can and leave no space for regrets. If I get knocked out by some player it will only be because I didn't play well, not because of lack of motivation. I will prepare hard for each game focusing on my opponent's playing style.

What do you think about the Hijab controversy surrounding the Women’s World Cup 2017? 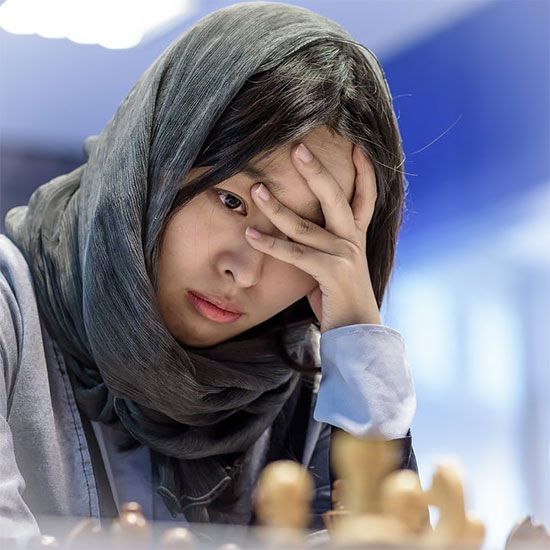 If a chess player would like to boycott the Women's World Cup in Iran, that is her right to do so. As for me, I will be playing there. If you count Tehran 2017, it will be my fifth time in Iran. I go there as a chess player and just play chess.

The current cycle gives me more opportunity to win Women World Championship. I am fine with the system.

What is your take on Hou Yifan’s decision to pull out of the World Championship cycle?

I respect Hou Yifan's decision and wish her all the success in future. She pulling out from the World Championship cycle has left the other players with more chances.

What is your ultimate aim in chess?

To win Women's World Championship title. I also want my rating to improve. Hopefully one day I will play in an elite chess event.

Thank you Ju Wenjun for your time and effort in answering these questions. Highly appreciated!