How deeply can Kasparov calculate?

Often, non-chess playing journalists tend to ask grandmasters how far ahead they can see in a chess position. How deeply can they calculate? We are sure even you are asked the same thing by your non-chess friends. How many moves ahead can Kasparov see in your opinion? New York, circa 1995: Anand took on Kasparov in one of the most hyped World Championships ever in chess history. Most people around the world wanted, with all their hearts, to see Anand become the World Champion, but in their heads, they knew that Kasparov would retain the title. Maybe because he can calculate very deeply?

How deeply can Kasparov calculate?

The PCA World Championship 1995 was held in New York and after eight games of the match, the score stood dead even. And then, in the ninth game, Anand won. All odds went for a toss, and the press was hysterical — light at the end of the tunnel.

Kasparov, though, began to go for the blood from the very next game. Anand: "What I mean is that he’d come up to the board, make a move, walk away and slam the door behind him. I’m pretty sure he did it consciously – he really wanted to take revenge for the previous day."

Kasparov back in those days was several floors over the lesser mortals — to be more precise, 107 floors. The 1995 PCA World Championship was fought on the 107th floor of the World Trade Center!

How far ahead do grandmasters calculate during a game? In the past, the great champions had varying answers to these age-old question, with some like Alekhine proclaiming to have calculated 10-15 move deep combinations in his autobiographical books while somebody, I imagine with a perfect deadpan, said that he sees only one move ahead, the best one. Carlsen has stated that there is no precise algorithm and it depends on the position — sometimes one does not need to calculate while sometimes one must dig very deep.

How far ahead could Kasparov see? Although he lost, Kasparov must have created a world record of sorts in the ninth game of PCA-WCC 1995.

You can watch GM Daniel King's in-depth analysis of the game in the video:

Kasparov, understandably, was shell-shocked after the loss.

Now, back to the original question — how far ahead did Kasparov calculate in the game? When asked to comment on the game by USA Today, an American newspaper covering the match, he explained that his loss was due to the anxiety he felt over the novelty he had planned for in the tenth game!

In other words, the then World Champion was calculating a whole game ahead.

The light at the end of the tunnel turned out to be a false alarm — it was actually the Kasparov Express charging towards Anand.

What happened in the tenth game, and what was the novelty Kasparov was referring to, that caused his loss in the ninth game? Let GM Daniel King show you that.

He used six minutes for his first 21 moves and said afterwards that everything had been prepared. And this was the time when computers weren't as powerful as they are today, and all work had to be done using your own head. 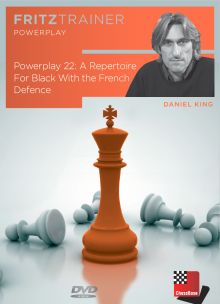 GM Daniel King's famous Powerplay series has created a mark in the world of chess training — his easy to understand and friendly approach have been a valuable asset for many students of chess. Contact us at chessbaseindia@gmail.com for the DVDs that are priced at only Rs. 999/- each. Select what you need for your chess and enjoy!

That is not all! You can get access to the humongous collection of Daniel King videos, amongst others, in the VIDEO section of our ChessBase account. Contact us at chessbaseindia@gmail.com for a Premium Membership account at Rs. 1499/-