The Stockholm Chess Society is the third oldest continuously running chess club in the world, first founded in 1866. Celebrating its 150th anniversary, the Hasselbacken Open has been organized, bringing players from all over the world, and things looked very interesting from an Indian fan's point of view. Adhiban tied for the first place with Russian Andreikin and was second on the tiebreak. Read this illustrated report to know how this delightfully organized tournament ended.

You may have never been to Stockholm, but when you read that the capital of Sweden is an archipelago of fourteen islands connected by fifty-seven bridges, and when you see the pictures of the lovable city, you can only long to be present in this Scandivanian beauty. To be precise geographically, the main Stockholm city is not really an archipelago but a fashionable and trend-setting society. A part of it is inside a time capsule, with historic structures and razor-thin cobblestone streets, while the main city is surrounded by the vast archipelago.

The time control for the tournament — 40 moves/100 minutes, then 20 moves/50 min and then for the rest of the game, 10 minutes plus 30 seconds per move from move one. Added to this, Sofia rule is being used, not allowing draw offers before move 31.

The momentous celebration, as well as the beautiful location and conditions, have drawn in 305 players from 38 nations, including 34 grandmasters, 12 IMs, and 26 FMs.

150 years of the Stockholm Chess Society

The tournament commemorates the 150th anniversary of the Stockholm Chess Society, which is the oldest chess society in existence as well as the third oldest continuously running chess club in the world, running uninterrupted since 1866.

The club was first created on December 29, 1866, at Lagergren Café in the old opera house. The society's first chairman was the famous explorer, Professor Adolf Erik Nordenskiöld. 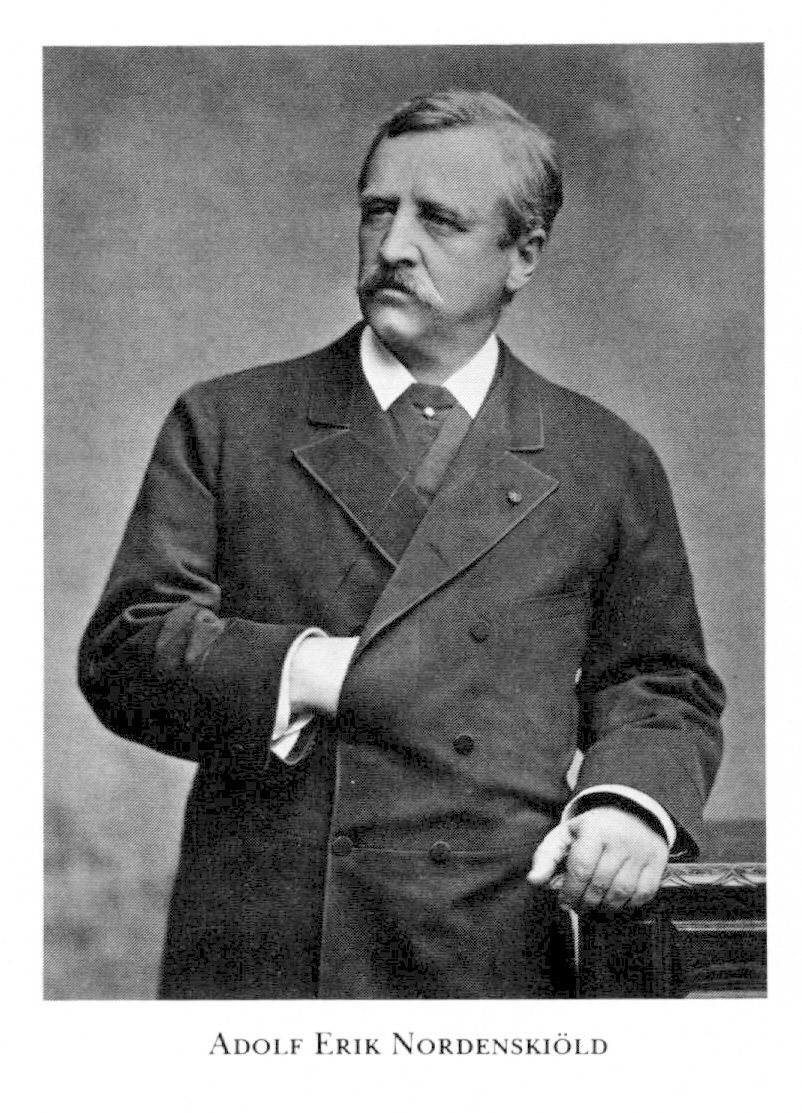 Nils Adolf Erik Nordenskiold (18 November 1832, Helsinki, Finland – 12 August 1901, Dalbyo, Sodermanland, Sweden) was a Finnish and Swedish baron, geologist, mineralogist and Arctic explorer. He was a member of the prominent Finland-Swedish Nordenskiold family of scientists. He is most remembered for the Vega expedition along the northern coast of Eurasia, which he led in 1878 and 1879. This was the first complete crossing of the Northeast Passage. 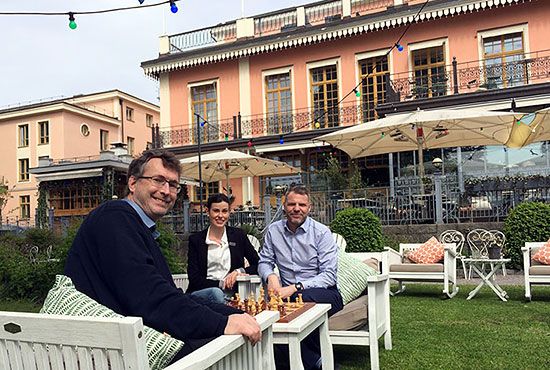 Current club president Stefan Lindh (left) and Ingemar Falk (right) are the event organizers, who have held nothing back with photos, GM video commentary, and more!

At the end of six rounds, three Indians — Sasikiran, Vidit, and Adhiban were in close pursuit of the leaders, while Sethuraman had just lost to Andreikin. It is very interesting to note that in the aftermath of the splendid Asian Nations Cup victory in Abu Dhabi a month back, the trio of Vidit, Adhiban and Sethu have played in Dubai and Stockholm at present. They are also scheduled to appear at the strong Zalakaros Open tournament at the end of May.

Coincidental or not, one would hope that a bit of bonding would only help India's cause at the upcoming Olympiad. 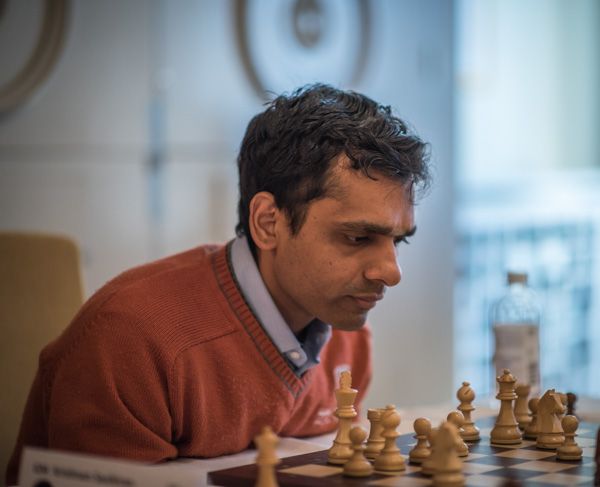 GM Krishnan Sasikiran (2642) was held to three consecutive draws in the final three rounds. He finished at 6.5/9. GM S.P. Sethuraman (2658) bounced back in the seventh round by beating Swedish GM Axel Smith (2503) after previously losing to Andreikin in the sixth round. He was held to a draw by American talent GM Samuel Sevian (2581) in the eighth round but finished with a win over French GM Fabien Libiszewski (2520). 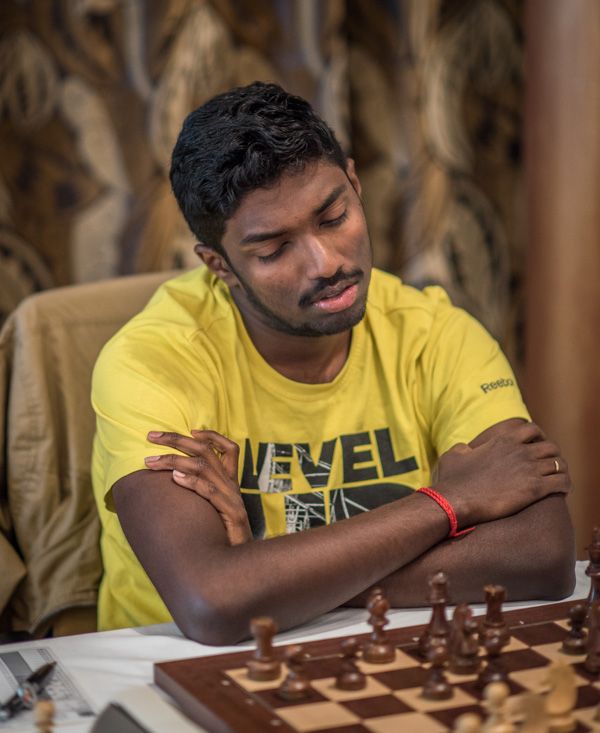 GM Adhiban B. (2663) settled for a draw with Israeli GM Ilia Smirin (2665) but beat GM Aleksey Goganov (2591) in the penultimate round. In the ninth round, he delivered a masterful performance to beat GM Viktor Mikhalevski (2516) leaving him tied for the first place with Andreikin! He was second in the tiebreak. 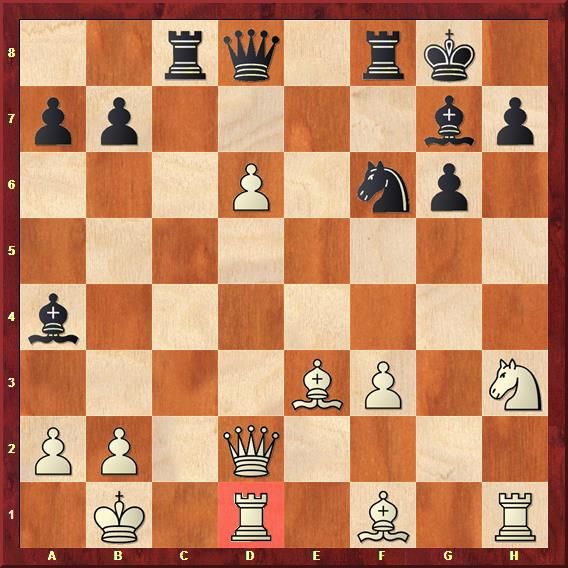 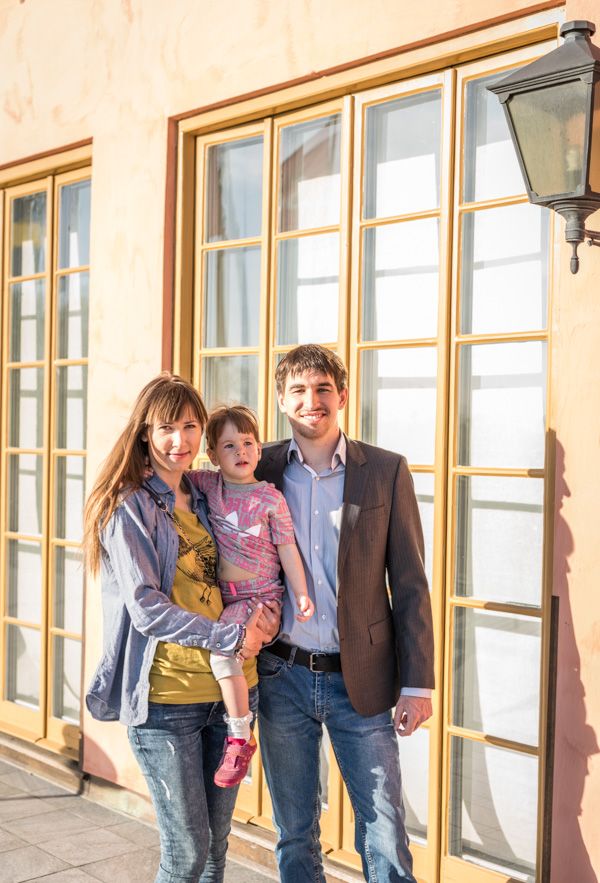 With 7.5/9, Russian GM Dimitry Andreikin (2736), seen here with his family, was the winner on the tiebreak. Black must have a handful of ways to win, but Andreikin chose the most pleasing one in his final round game to win the tournament in style. 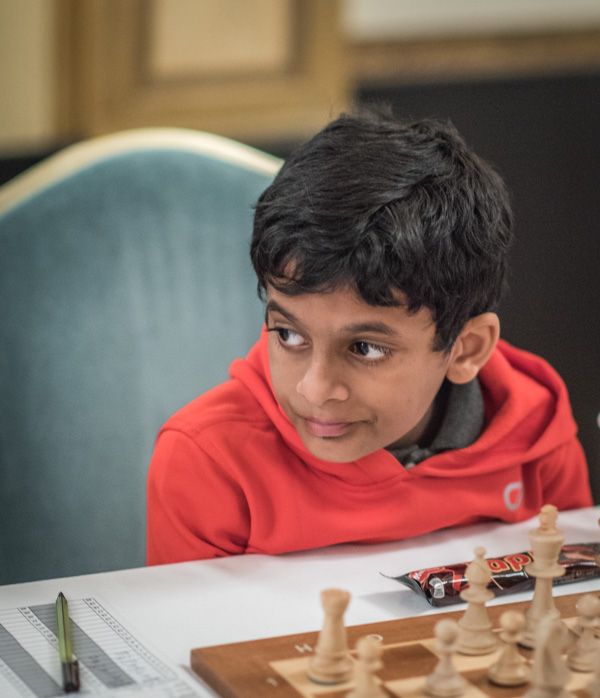 Eleven-year-old FM Nihal Sarin (2351) suffered a roadblock in the middle of the tournament, but in Churchill's classic 'Never back down. Never, never, never!' style, he finished on a high with a beautiful victory over Lithuanian GM Eduardas Rozentalis (2584). All too often, we ruin well-played games with one careless move throwing everything away. Experience has made Nihal tougher and it is black to play here.

Honestly, there must be a couple of ways to win here, and Black chose the beautiful 43...Kh1!, with the idea to play 44...Ng6, and now, the fork that was functional in the previous variation, will not work — neat. 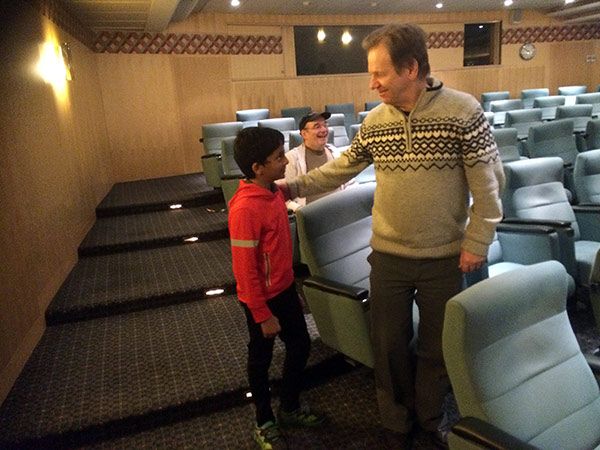 The legendary GM Ulf Andersson approves! It is always nice when an Indian is offered warm hospitality abroad, and the Swedes were visibly happy to meet Nihal.

Some general impressions from the tournament arena: The staircase leading to the playing hall. 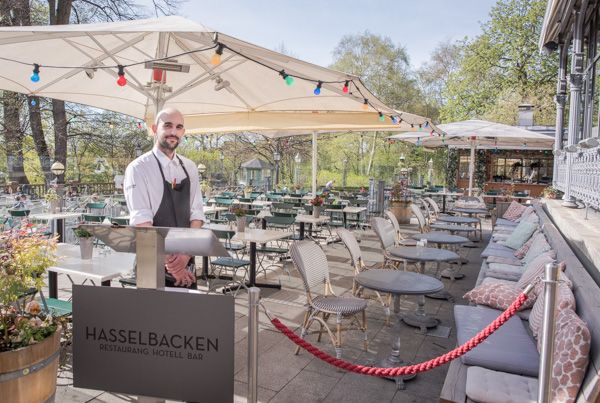 The main sponsor of this anniversary tournament — Hasselbacken Restaurant and Bar in Stockholm. Fine food and the right ambiance 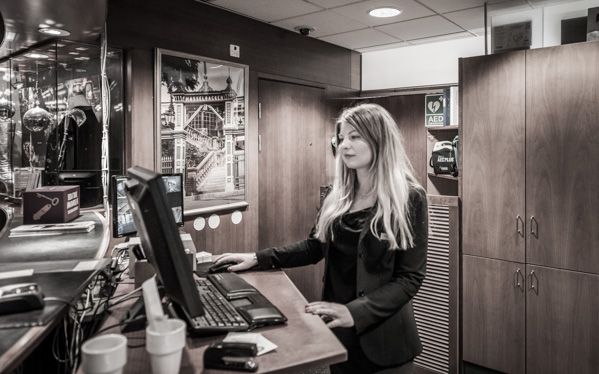 The receptionist at work 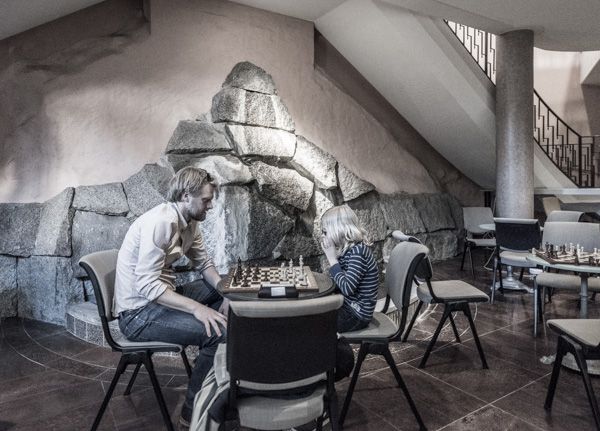 And here, chess fans at work 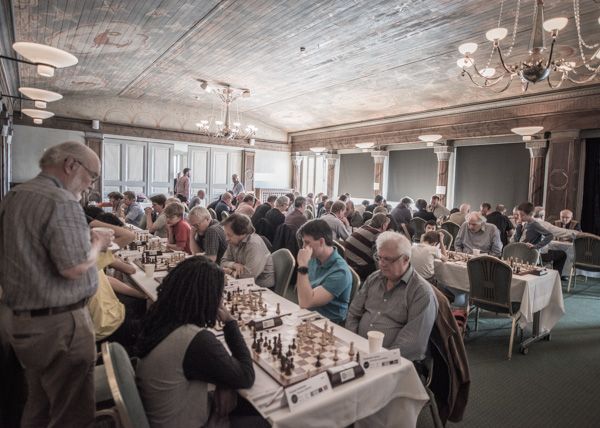 They all love the game but occasionally declare civil war. 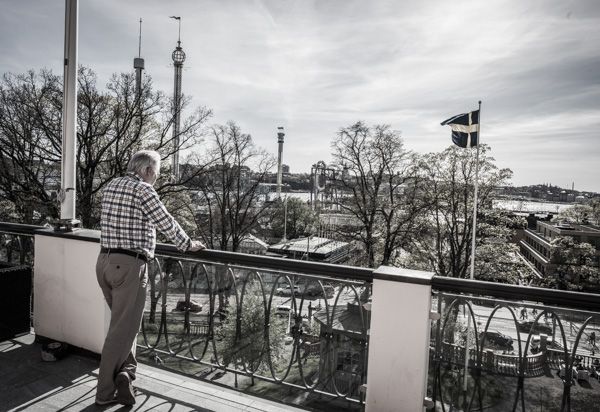 Players also have access to the large terrace with a view over the amusement park Gröna Lund, the ABBA Museum, and the beautiful Stockholm waters. 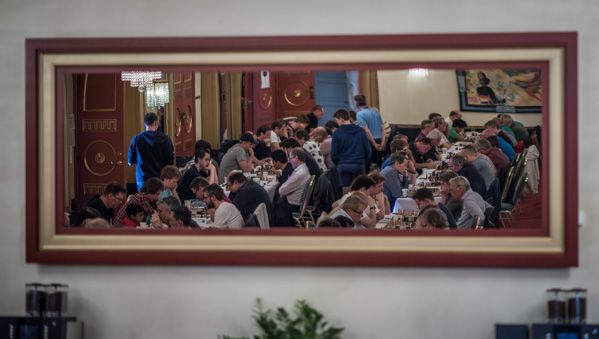 All in the mind's eye.

The creativity and diligence of the official tournament photographer Lars OA Hedlund deserves utmost praise. His work with the camera produced some delightful pictures which were the chief reason why this tournament was so well celebrated and covered by the press across the globe. Quality photographers are important for chess tournaments.

Official Website with all games in PGN in Games section.