Harikrishna's last round heartbreak in Biel

There is something about Harikrishna's plays that leaves us all enchanted. Perhaps it is his accuracy in playing the endgames, or perhaps it is his ability to find the continuations to pose maximum problems to his "human" opponents or maybe it is just that he calculates lines very precisely. Whatever, it is, Harikrishna managed to use these skills to play power packed chess at the Biel Festival. Just when it seemed that he would win the event, he played a poor game against Bacrot in the last round and had to settle for the third spot. Analysis of Hari's key victories and a report from the event. 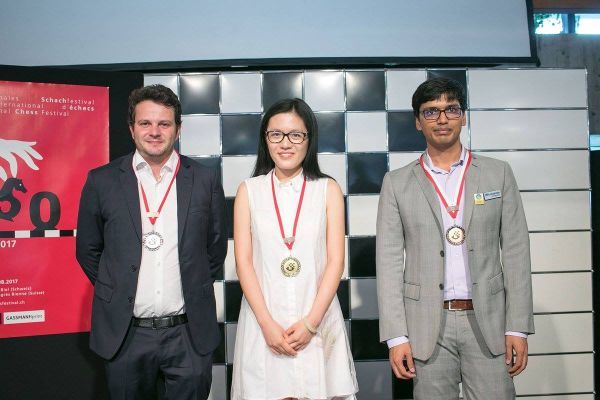 The Grandmaster tournament of the Biel Chess Festival featured an eclectic field of participants in its Golden Jubilee edition. In the mix were names like the Czech number one, David Navara; former FIDE world champion, Ruslan Ponomariov; and world’s highest rated woman player, Hou Yifan. India’s frontman at the event was the Gunthur-born grandmaster, Pentala Harikrishna. 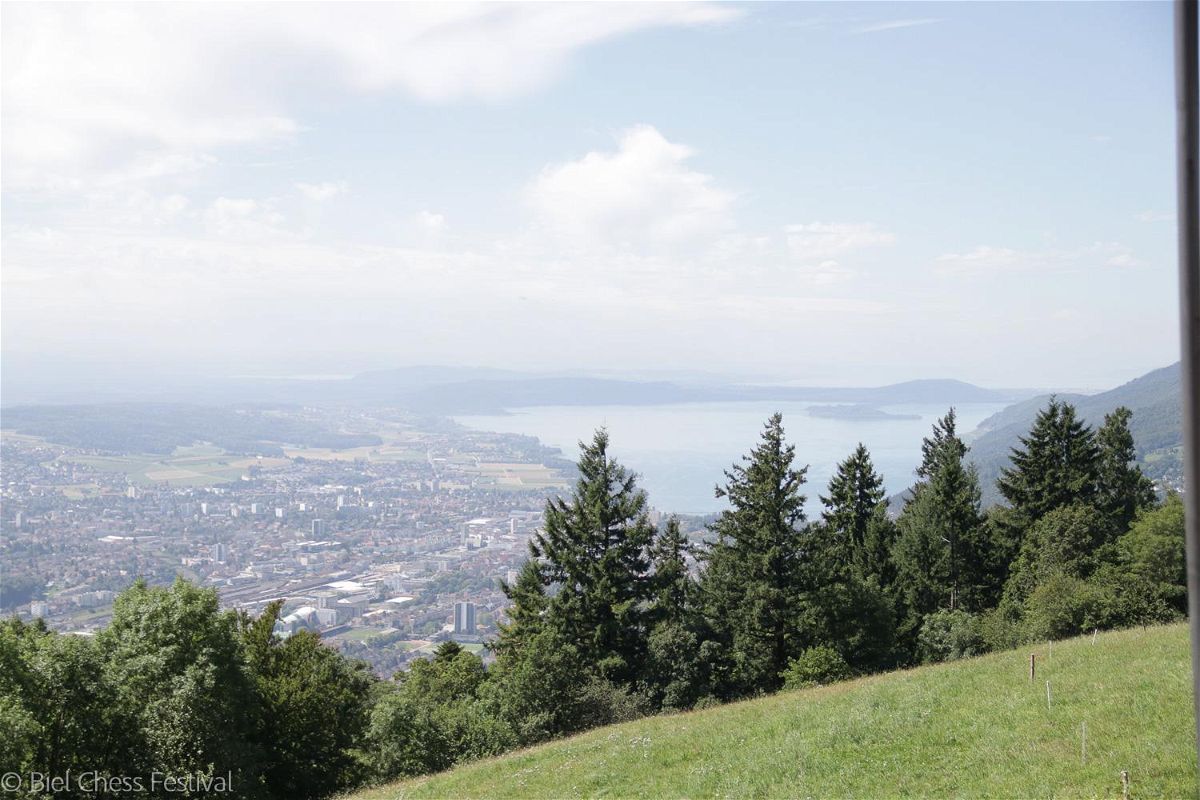 Harikrishna had put up an excellent show at his last tournament, the Geneva Grand Prix, and in Biel too, he did not fail to impress. The Indian ace was on an unbeaten run – having won three and drawn five of his eight games – and was leading the tournament with Hou Yifan after the penultimate round.

However, just like in Geneva, Hari fumbled at a crucial moment in the tournament and missed out on winning the title prize. In the final round, Hari failed yet again to convert his tournament lead into a title prize as he blundered right out of the opening by suffered his only loss of the tournament against Etienne Bacrot.

Hari walked on tight ropes in his game against IM Nico Georgiadis (Source: Official Website)
When the curtain rose, Hari was seen struggling against a much lower rated opposition. The inaugural round saw him paired against veteran Grandmaster Rafael Vaganian, who is rated 175 points below him. Given that he was the clear favourite by rating, expecting Hari to play for a win despite having the black pieces was a safe guess. However, the Indian ace chose to take no risk and start safely. Within just 21 moves of a Queen’s Gambit, he chose to sign peace. Round two also saw a similar result. Once again, his opponent, Nico Georgiadis, was much lower rated than him. But this time, he was in a lot more trouble than in the previous game and was perhaps lucky to wriggle out with a draw.

Hari showed some extraordinary bit of calculative ability in his game against Morozevich (Source: Official Website)

In round three, Hari essayed a rare variation of the Nimzo-Indian defence against Alexander Morozevich. This was probably his most spectacular game of the tournament. Paradoxically enough, this game ended in a draw! In the game, Hari seemed to be in deep trouble out of the opening but showed some extraordinary calculating ability and found almost unbelievable tactical resources to cling to a draw. After the game, tournament’s official commentator, GM Daniel King said, “Although Harikrishna has had three draws so far – if he shows that kind of calculating form – I think we could be seeing him storming through in the tournament.”

With this win, Hari really got the ball rolling and just a round later in round six, got his second victory of the tournament, this time, against the women’s world number one, Hou Yifan.

In round 6, Hari beat the eventual winner of the Biel Grandmaster Tournament, Hou Yifan (Official Website)

The game began as a Symmetrical English but soon transposed into a Sicilian Maroczy bind. Both players got a satisfactory position out of the opening but Hari was able to squeeze out a pawn after a long hard fought middle game. Despite this, the position was within the realms of a draw because of Hari’s oddly placed rook on the queen’s wing. But on the 45th move, when Hari offered an exchange of queens, Yifan backed down and allowed the Indian ace to get his rook out of the pawn wall around it and was able to force resignation by the 52nd move.

After the ante-penultimate round, four leaders emerged: Bacrot, Yifan, Harikrishna and Georgiades. However, within just one round, the list of leaders was chopped to half. The penultimate round saw three decisive results, of which two decided the leaders.  While Hari was able to bring the former FIDE world champion, Ruslan Ponomariov on his knees, Hou Yifan got the better of GM Rafael Vaganian. Alexander Morozevich also scored a win against Noel Studer and remained within striking distance of the leaders.

The main contenders of the battle, however, were Yifan and Hari. Hari had a slight advantage over Yifan as he was the winner of their individual encounter. As per the tie-break rules, the Sonnenborn-Berger system was to be applied in the case of ties. But if the scores are still tied, the result of the individual encounter between the tied players was to resolve the tie. 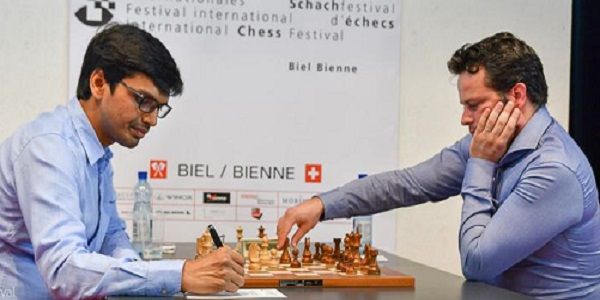 During his disastrous game against Bacrot (Source: Official Website)

The stage was set. The final round of the Biel Masters was scheduled 2.5 hours earlier, at 11:00 am in the morning. This was Harikrishna’s chance to not only win the title but also finish with an undefeated score at such a high-level tournament. He was paired against the Frenchman, Etienne Bacrot. Hari had the white pieces.

He put faith in the Italian yet again. Of course, it is a strong opening and white generally gets a small but stable advantage by playing it. More importantly, Hari had played this opening before on several occasions. Maybe it just wasn’t Hari’s day. Right after the opening phase of the game was over, on move 21, he made an inexplicable blunder and lost his game against Bacrot. On the other hand, his rival, Hou Yifan, made the most of her opponent’s inaccuracies and won her game in style against Georgiadis and became the champion of Biel Chess 2017. Hari’s opponent, Bacrot, who was a point behind him before the round, also jumped past Hari by half a point and took the second place while the Indian ace had to be content with the third place. 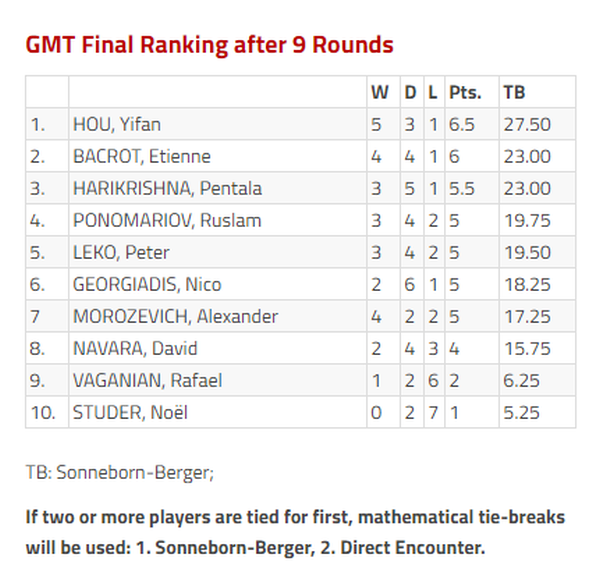 Of course, this is by no means a bad result. But given that he had the chance to win, it is unfortunate that Hari had to miss out on winning such a prestigious event. Within less than a month’s time, he will be playing at the Chess World Cup in Tbilisi, Georgia where players like Magnus Carlsen and Vishy Anand have confirmed their entries. With his performances in Geneva and Biel, Hari has more than proved that he is capable of taking on the best in the world. But it can also be seen that he can falter at crucial moments. If he could somehow find a way to overcome this, Hari is sure to give even the Carlsens and the Caruanas a run for their money in Georgia.