GM K.Priyadharshan on pursuing chess and education in USA (2/2)

In part II of our interview with Priyadharshan, he talks about his later days in Lindenwood, and the progression towards Webster University. Furthermore, he shares with us how to balance academics and chess. And how the SPICE program has helped him to grow as a chess player. He might well be one of the most educationally well qualified grandmaster from India and we are glad that he decided to share his knowledge and experience with us.

In part I, we asked Priyadharshan about different things that every Indian student must know while deciding to pursue chess and higher education in the United States of America. In this second and final part, we get into the specifics as to how he managed his time, how he achieved his GM title, how Webster is helping him improve and which are the best universities in US to pursue chess and education for Indian players.

Read part I of the interview. 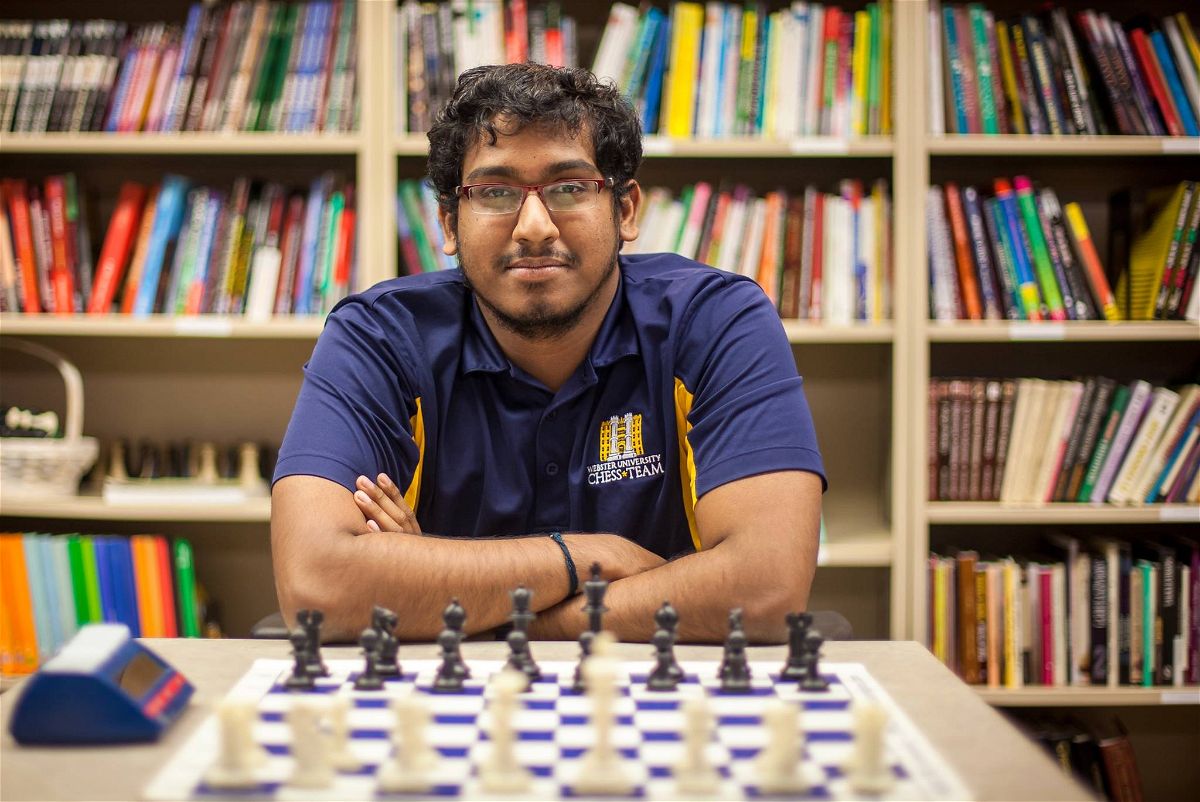 Sagar Shah (SS): I remember reading regularly from your Facebook posts that you were the most Valuable player of the season in the US Chess League. How do these things work?

Priyadharshan Kannappan (PD): You are mentioning about the 2012 award, when I played for the St.Louis Arch Bishops in U.S Chess League and got the Most Valuable Player. I had an extremely great season, where I went 8.5/10 in the regular season, with a 2700+ rating performance. I think one of the main reason was because, most of my opponents had no idea, who I was, as I had just arrived at the United States. They had no clue about my playing style, and also I think, my GM opponents took me lightly. I was also really motivated to perform at that point in time, as we had a comparatively weaker team, and I realized the importance of me holding strong on my board, would do wonders for the team!

In 2013, I came super close to being a MVP, but GM Jeffery Xiong had a fantastic season, and became the MVP of US Chess League. I have been one of the strong performers in the USCL over the last 4 years, and I think it's because I just love the format of the event, and the fact that it's a team event, gives me more motivation to give my best. 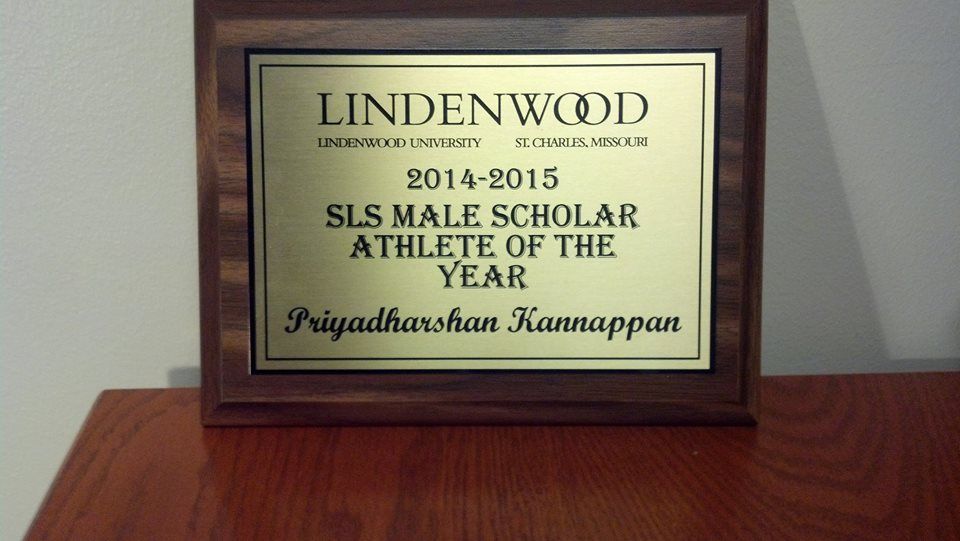 SS: How did you manage your academics and chess at Lindenwood? Was the University co-operative or did you have to stay awake all night to finish your academic work and then practice chess.

PD: It was definitely tough. As I had earlier mentioned every weekend I will be playing some tournament, and on weekdays I will be attending college classes. There have been so many instances, when we will be back from a tournament on Monday morning at like 4 a.m., and I will have a class at 8 a.m. I would be awake from 4 a.m., get the homework done for the class and go and sit in the lecture like a zombie! (Sometimes, I did fall asleep as well!)

There has been numerous instances, where I would do homework in between the games. It was my choice to juggle both, so I did it happily! The University was cooperative to some extent, as I would generally miss around 5-6 days of classes in a semester, and they will give me the participation points, but most professors wouldn't give any extra time to submit homework, so even if I skip a class, we were expected to read the course content on our own, and do the homework like every other kid in the class.

The University also provided coaching and during my time in Lindenwood, I had numerous opportunities to train with Yasser Seirawan, Ronen Har Zvi, Varuzhan Akobian, Alexander Goldin which helped me improve my game a lot. 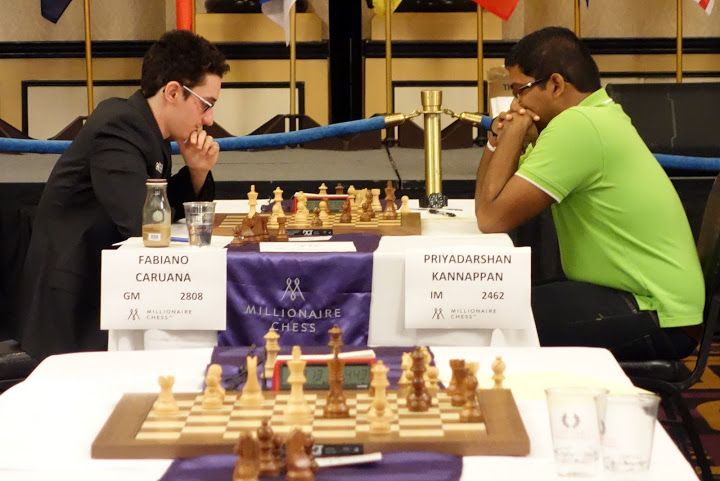 Fighting against Fabiano Caruana at the Millionaire Chess 2015. The game ended in a draw.

I definitely have to thank Lindenwood for the atmosphere they had on campus. They have 55 different sports on campus, so basically the whole campus is filled with athletes from various sports and with varying strengths starting from Olympians to novices. The sporting atmosphere of competing, training, and challenging yourself was in the rarified air of the campus, and it would constantly motivate you to keep pushing and to give your best!

There are lot of people I need to thank for me completing my UG degree successfully, first of all it would be my brother, parents, my good friend Nolan Hendrickson and his family from Lindenwood University, the Student Life Sports director Mike Elam and the Assistant Director Jason O'Dell, and my school friends back home. 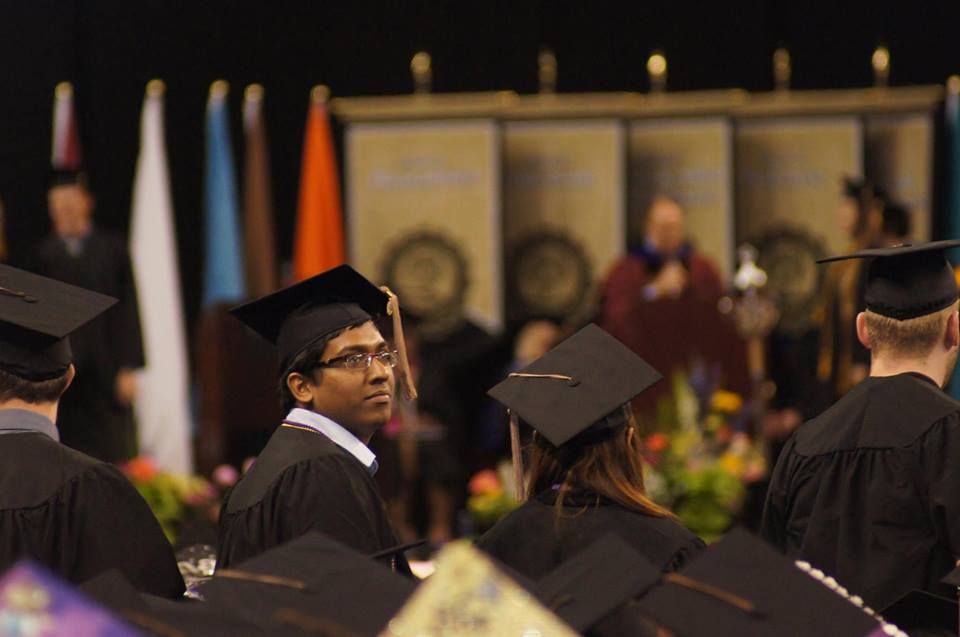 Graduating from the Lindenwood University

SS: The next step in your life was the Webster University. Why did you decide to go to this University?

PD: I really wanted to see how far I can go in chess, and the final GM norm was very elusive. I was seriously considering applying to universities which offers chess scholarship for my Masters degree, and also at the same time I was thinking of my other career options, but then all of a sudden Susan Polgar called me, and asked me to visit the SPICE office. She told me that they have a chess scholarship open, and she knew me well, as I had applied to get into Webster as a freshman or a transfer student during various points in my UG degree. The scholarship was a great offer, and I believed joining in Webster, will do a whole world of good for my chess, so there was no way, I was turning down that offer to do my Masters with a scholarship. 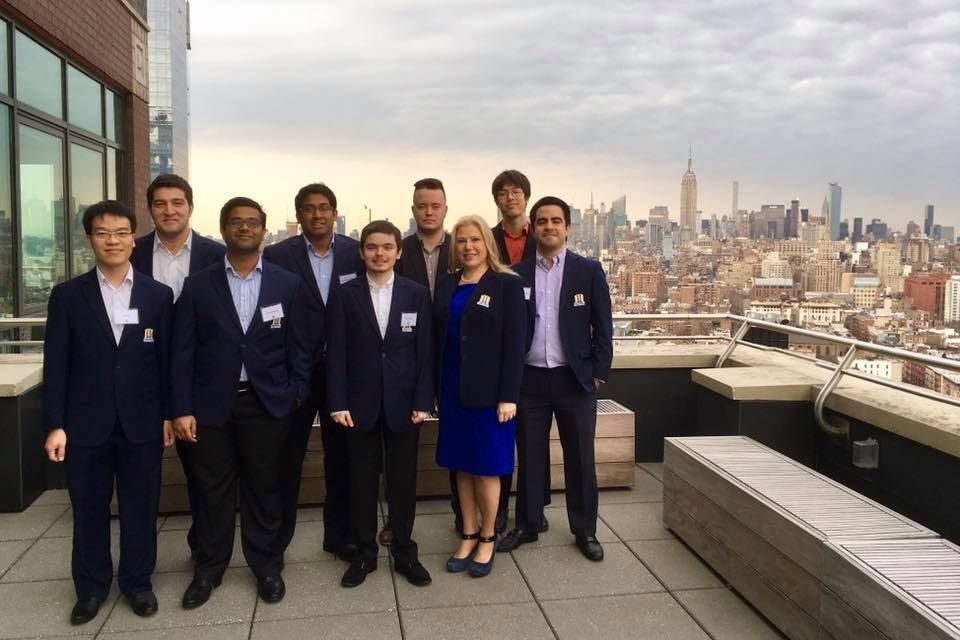 SS: Do you think going to Webster helped you to take the final leap towards becoming a grandmaster?

PD: I actually completed all the requirements to become a GM, a month before I started classes in Webster. The biggest issue, I had in getting my 3rd norm, was because I needed a 6 day GM norm, and there are only 3-4 tournaments in U.S in a year, that are 6 days or longer, so I had very limited chances to get the norm. The fact, that it was summer, and I had no college classes, combined with putting some serious training on chess helped me get the 3rd GM norm.

I also think the fact, that I had not much dilemma, on where my career is heading for the next 2 years, helped me to focus better on chess in the summer of 2016.

Here's the game against Vera Gonzalez that helped me achieve my final GM norm.

SS: What is your opinion on the scope for talented Indian chess players for education in the United States? What is usually the minimum requirement? Is it a good option and which are the universities you would recommend?

PD: Getting a chess scholarship in U.S has become extremely competitive now. You have to be a GM or a very strong IM to get a chess scholarship. The academic requirements are SAT and TOEFL for UG and GMAT/GRE and TOEFL if you are applying for Masters. The top chess universities are Webster, St.Louis University, University of Texas at Dallas, Texas Tech University, University of Texas at Rio Grande Valley and University of Maryland Baltimore County. Lindenwood has lost all of its star players, but I believe they are trying to rebuild their program, so that is also an option.

If someone is looking to take chess as a profession from the beginning, the idea of getting a college degree and also pursuing chess may not be very enticing, as you would have to get good grades to maintain your scholarship. I would suggest applying to U.S universities, if you are interested in giving importance to getting a good college degree, and also in learning valuable life skills at the same time, and also getting to improve on chess marginally! 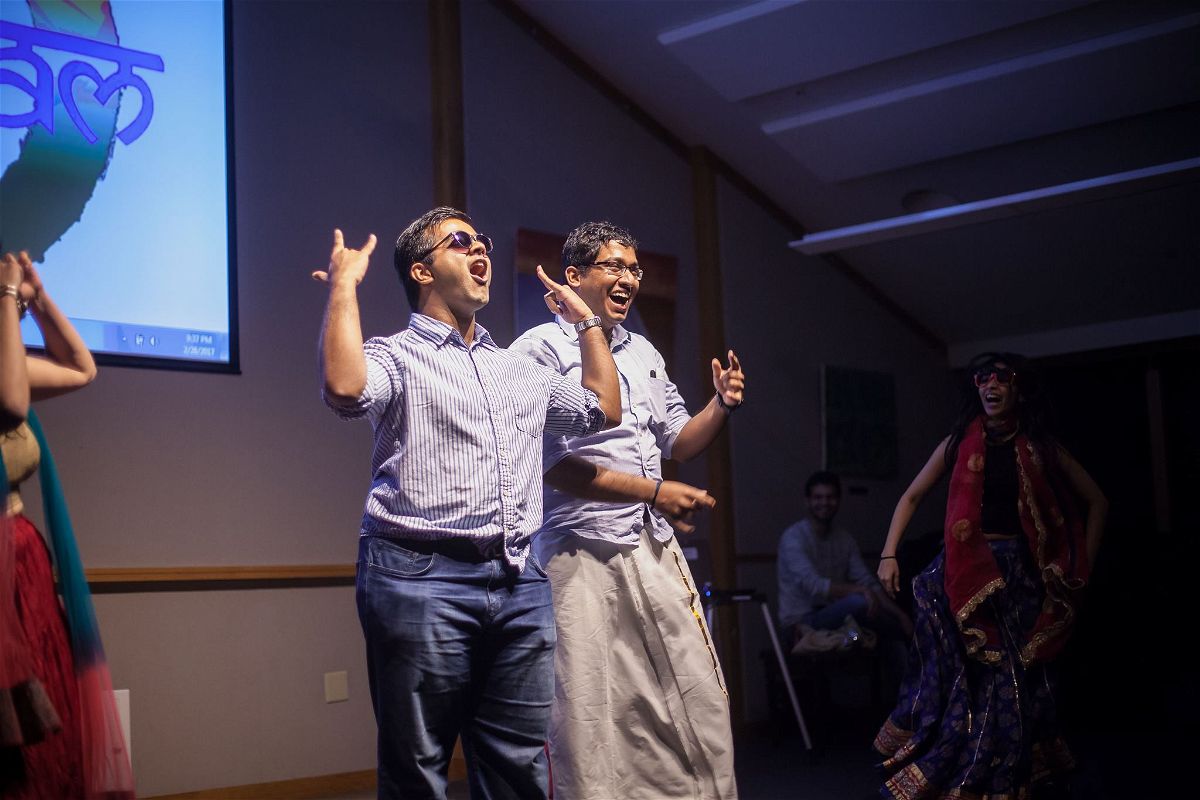 Having a ball at the Webster! Ashwin Jayaram and Priyadharshan K. are the two Indians at this university.

SS: Webster has a rich tradition of having world class chess players. Can you tell us how the players help each other to get better and also the role of Susan Polgar?

PD: Webster has a very strong team, and we train as a team once every week during the school year. We have a dedicated building for chess training, to which we have access 24x7 and also we have a great chess library, which is updated literally every week with addition of new books in the last few weeks. This environment and the ability to access all the new material helps us in a big way. Players also work with each other informally to improve our game outside of the formal training. 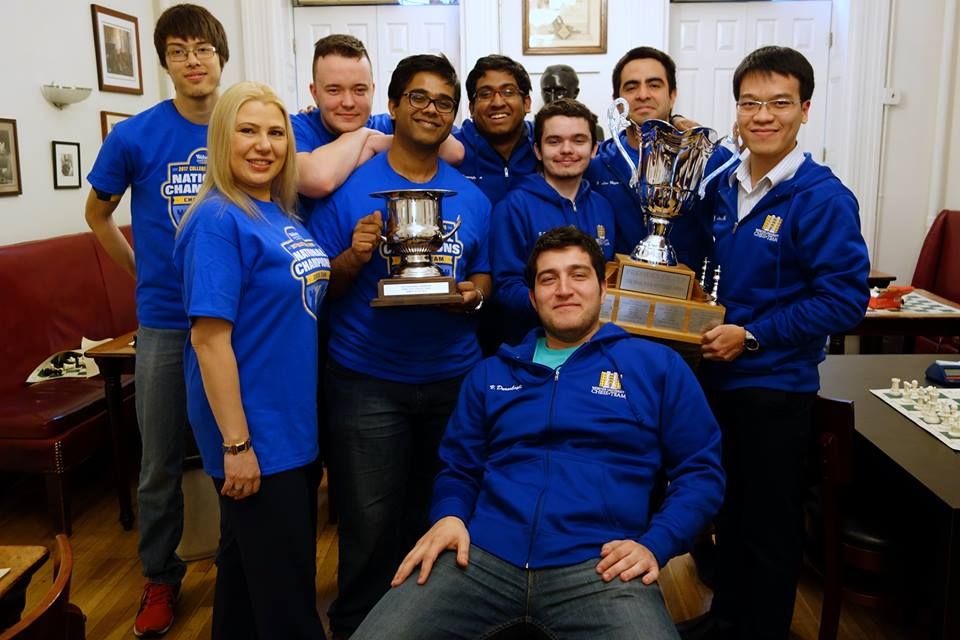 With guys like Robson, Shimanov, Le Quang Liem, Shimanov, Durarbayli, Nyzhnyk, Webster is an amazing place to be engaged in chess!

We also have week-long intense training sessions when we prepare for important events like the Collegiate Nationals. Ms.Susan Polgar is the coach of our team, and she constantly reviews our progress throughout the year, and gives us suggestions on fixing our weaknesses and to improve on our strengths. Most of our formal trainings are conducted under the guidance of Susan.

You can find more information about the SPICE program here.

SS: What are your future plans? You are perhaps the most highly qualified grandmaster in India. Will you pursue a chess career or something related to your studies?

PD: I will be graduating in May 2018 with a degree in MS Management and Leadership. I want to hit 2625 before I graduate from Webster and if all things goes well, I am planning on becoming a pro after I graduate. I have spent my whole life revolving around chess, and I don't see myself moving away from this beautiful and majestic game!

Elo 2530, ranked 23 in India, Priyadharshan Kannappan at 24 years of age is surely on his path to improvement 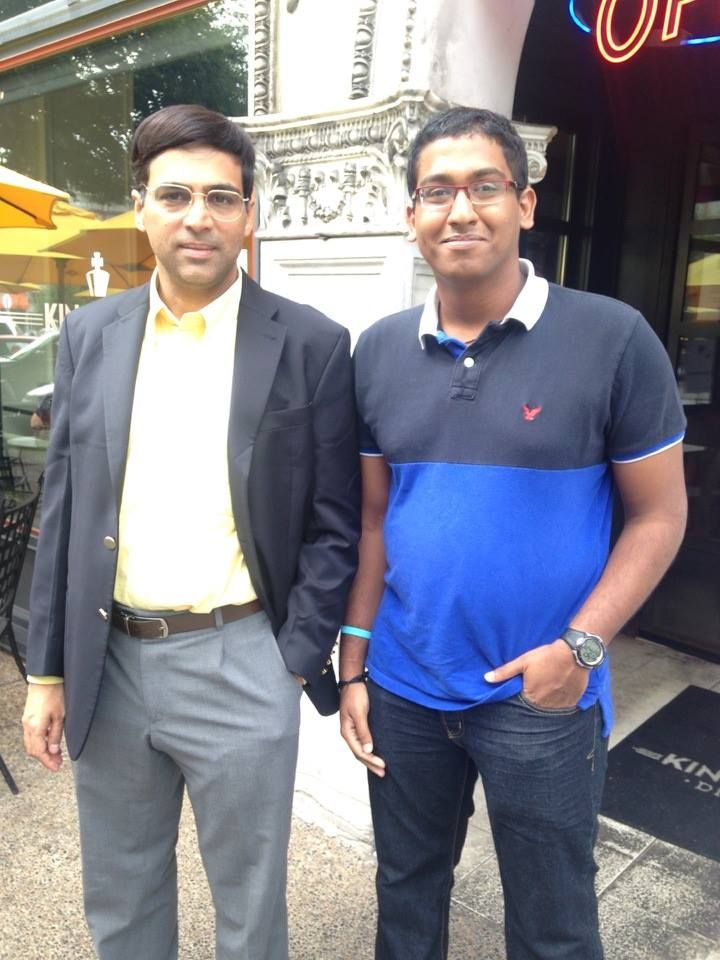