Anand does a Carlsen!

At the Qatar Masters Open 2015 Magnus Carlsen drew his first round game against Nino Batsiashvili and went on to win the tournament. Anand has taken the first step in the right direction(!), by drawing his game against Szidonia Vajda rated 450 Elo points below him! We have an illustrated report from Gibraltar with game analysis, pictures and a special moment sent to us by Nisha Mohota.

The Gibraltar Masters began on the 26th of January 2016 with a star studded field in the masters section. Three of the world's absolute elite: Vishy Anand, Hikaru Nakamura and Maxime Vachier Lagrave are playing here. 254 players from 51 countries are taking part in this event. There are 74 grandmasters and 50 International Masters. Like all first round battles in such high profile events, the top seeds had a pretty easy outing. Most of them won their games, but it was quite a huge upset when Szidonia Vajda (2357) held Vishy Anand to a draw. 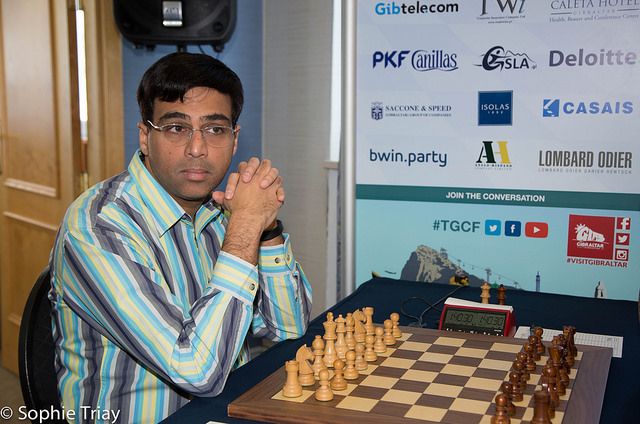 Anand looking calm and relaxed before the first round 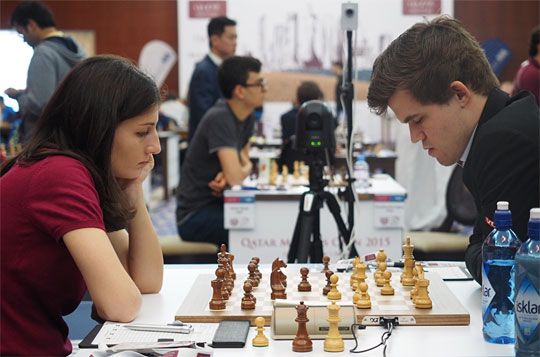 Of course he was well aware of what had happened to Magnus Carlsen at the first round of the Qatar Masters Open 2015. The World Champion had drawn his game against the unheralded Nino Batsiashvili. [picture by Amruta Mokal] 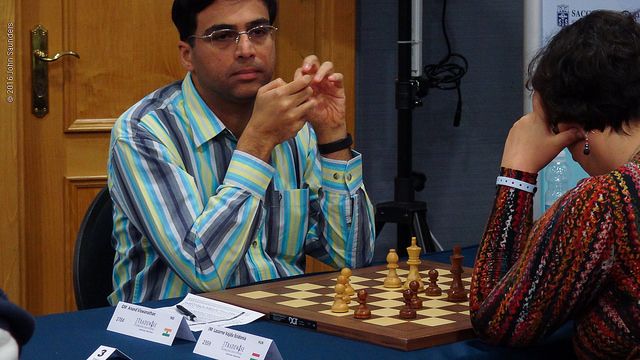 Anand tried as hard as he could. He even had the advantage of having an outside passed pawn, but it was clearly insufficient as he just couldn't break through black's defences. 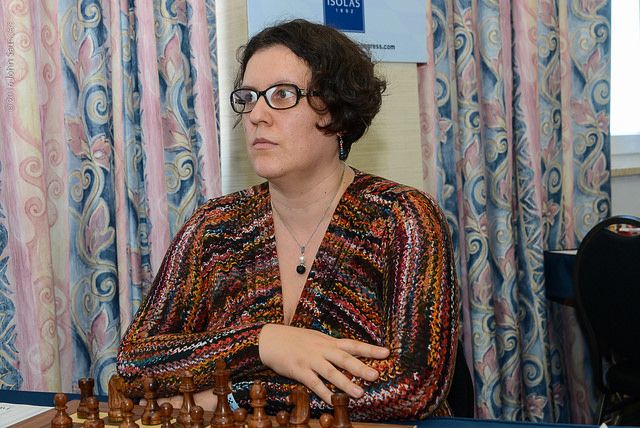 In one of our previous report on the ChessBase newspage on the Zalakaros Open 2015 we had mentioned about Szidonia. This is what we wrote: 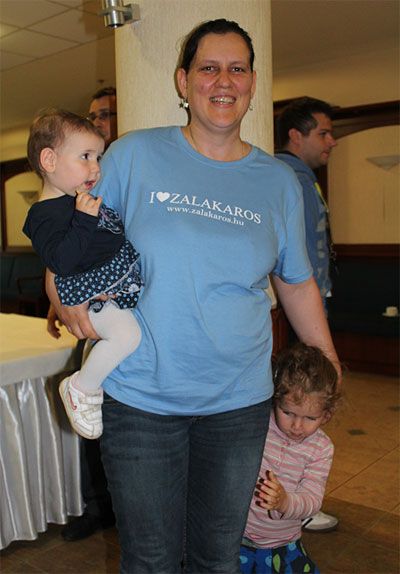 A few words must be said about this 35-year-old lady. Szidonia was surely the most deserving woman player in the event. She beat GM Danny Raznikov (2494), IM Peter Schreiner (2449) and GM Tamas Banusz (2589). She resumed playing active chess only a year ago – prior to that, she had taken a break from chess in order to focus on her family. Since last year or so she has been training regularly with GM Joszef Horvath and her results in this event show that their work is not in vain. Vajda came to the tournament with her two little kids (as can be seen in the above picture) and one can only imagine how difficult it must have been for her to perform the double role of mother and chess player. Hats off to this strong-willed and determined chess player. 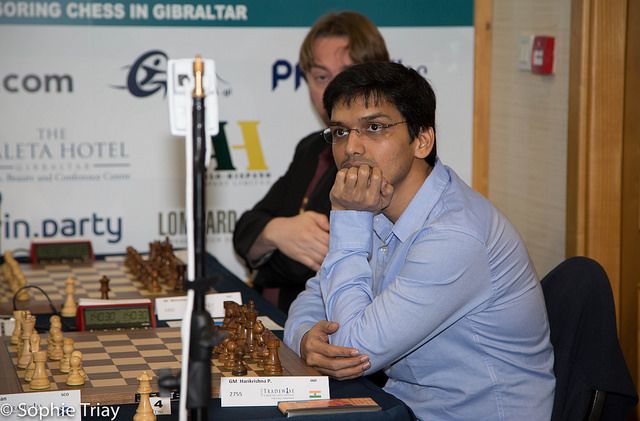 Harikrishna played an opening that was extremely weird but won his game!

Here's the game for you to replay. Just check out the moves Bd7!? and d5!? in the opening: 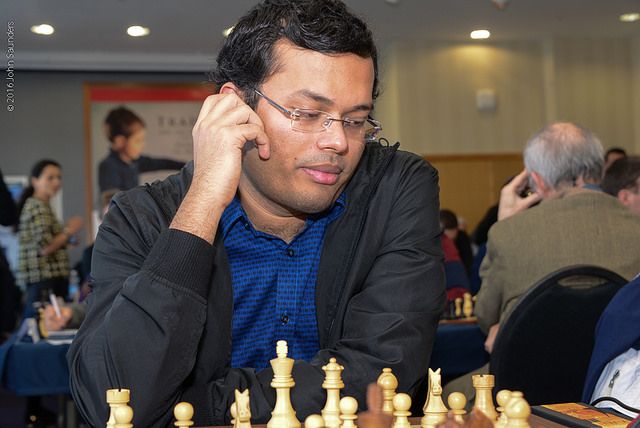 Surya Shekhar Ganguly survived a scare against Matthias Bach and somehow managed to draw in a pawn down opposite coloured bishop endgame. Ganguly will now play against Szidonia Vajda and Anand will face Ganguly's opponent. 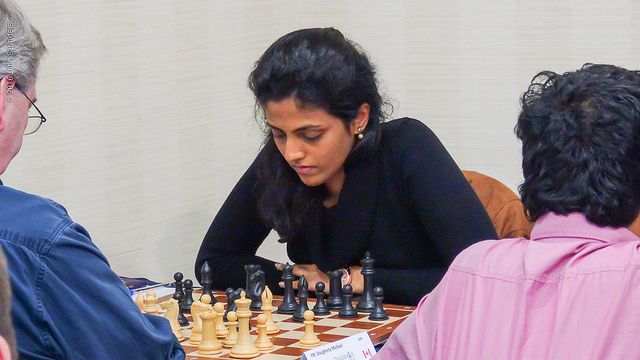 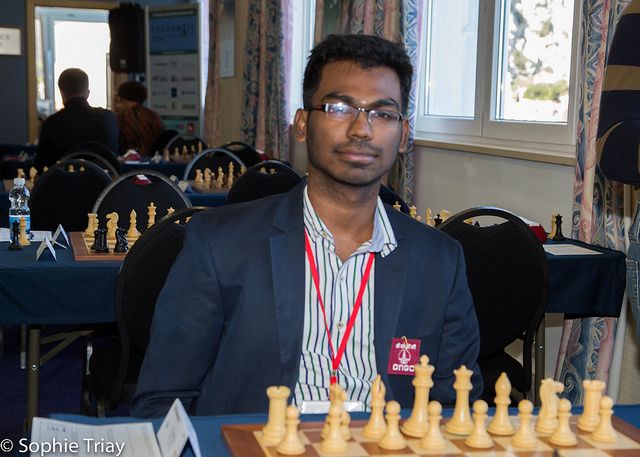 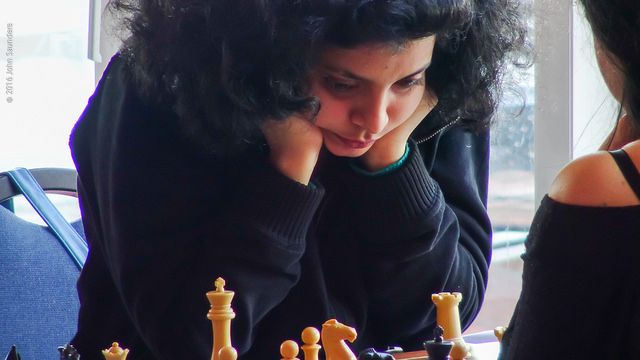 Padmini Rout, who is on a long trip - Keres Memorial, Marienbad Round Robin and now Gibraltar, won her first round game 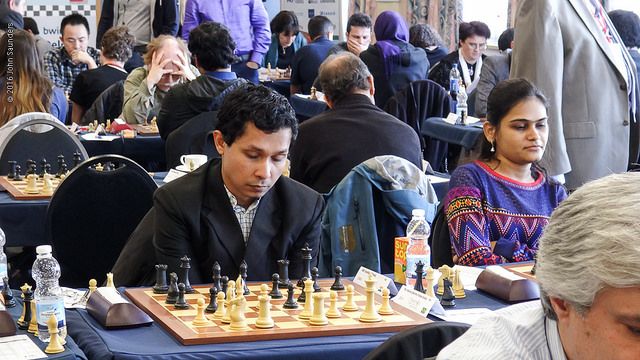 The two friends from Kolkata had differing fortunes. Sandipan Chanda won his game against Felipe Kubiaki while Nisha Mohota had to face defeat against Pavel Tregubov 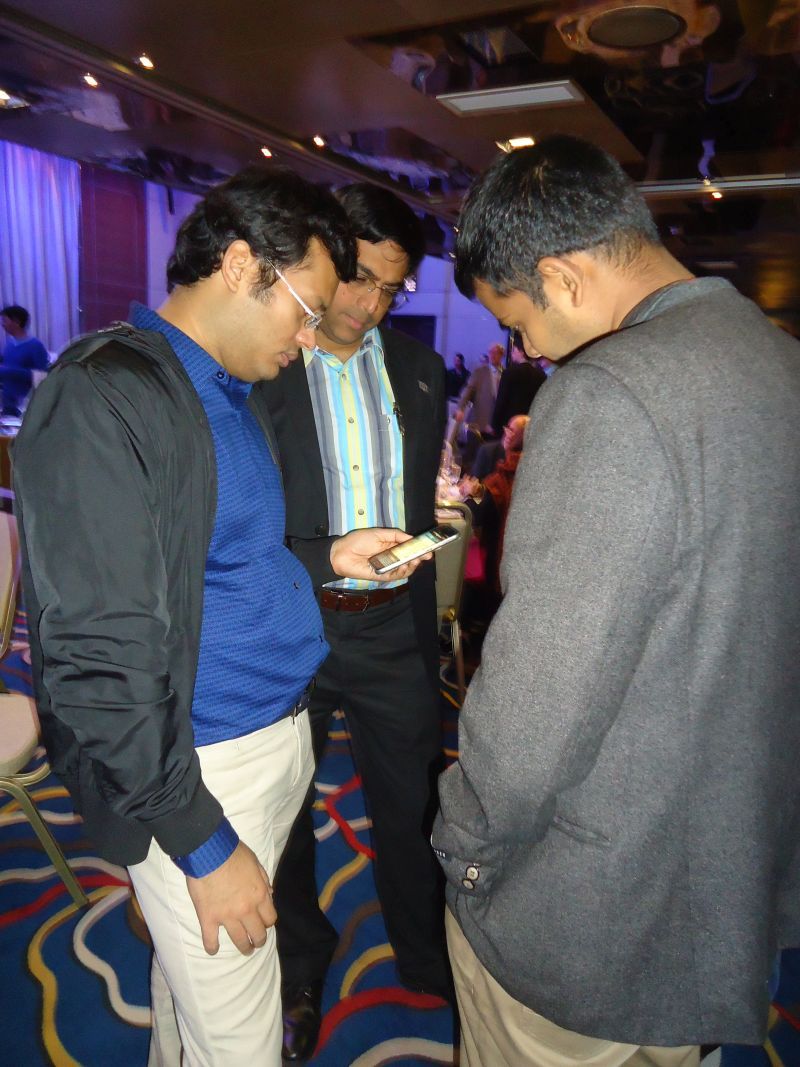 Nisha sent us this nice image with the following words, "I took a picture of Anand analysing (with Ganguly and Vishnu- actually it was all of us trying to listen and follow hard the super- fast analysis of Anand and Ganguly! When I took the pic, it was only three of them) Carlsen's win today over Adams! When we have a disappointing result, we like to give a break to chess for some time- but not these top players! It is chess always for them! A gentleman named Asim Pereira created this wonderful Follow Chess App which has made following tournaments so easy for us! Now I know the advantages of a smartphone (which I did not have willingly till last November to keep me away from 'distractions' !)" 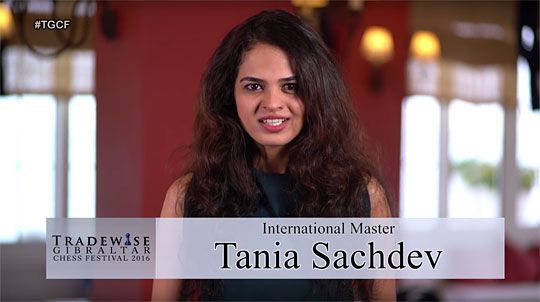 IM Tania Sachdev is doing some phenomenal job at the tournament. She is the anchor at the Day's Play video which are highly professionally made. Have a look at this video #2 where she takes at a look at the opening ceremony and talks to top players Vishy Anand and Hikaru Nakamura:

When was the last time that Anand played as far as board number 57 at an event!