The 14th Delhi Open 2016 took off in the Indian capital with almost 1600 players competing for their share of the 35 Lakhs prize fund that is up for grabs. The Category A and B of the Open began yesterday and the tournament witnessed a handful of surprises as the third seed was eliminated by a 12-year-old and a bunch of talented individuals held their higher rated opponents. ChessBase India brings you an illustrated report.

Over the years, the biblical David vs. Goliath story has metamorphosed such that it has been used by many a sportswriter to describe situations where an underdog makes a game out of an opposition that is too strong for him/her, at least on paper.

On Saturday evening at the Ludlow Sports Complex here in Delhi, things were proceeding well for most of the higher-rated grandmasters, many of them Non-Indians, because Indian grandmasters find Delhi too far away to travel -- only three of the twenty-one GMs are Indians. Anyway, the quietness didn't last long as... 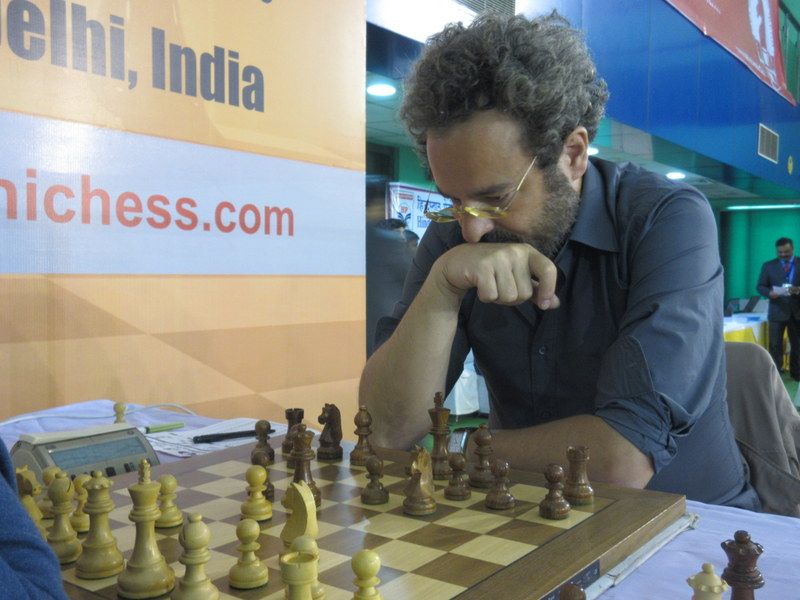 Italian GM David Alberto (2597) played for a trick that turned out to be a mirage, blundering a pawn, going down on time and eventually losing the game to... 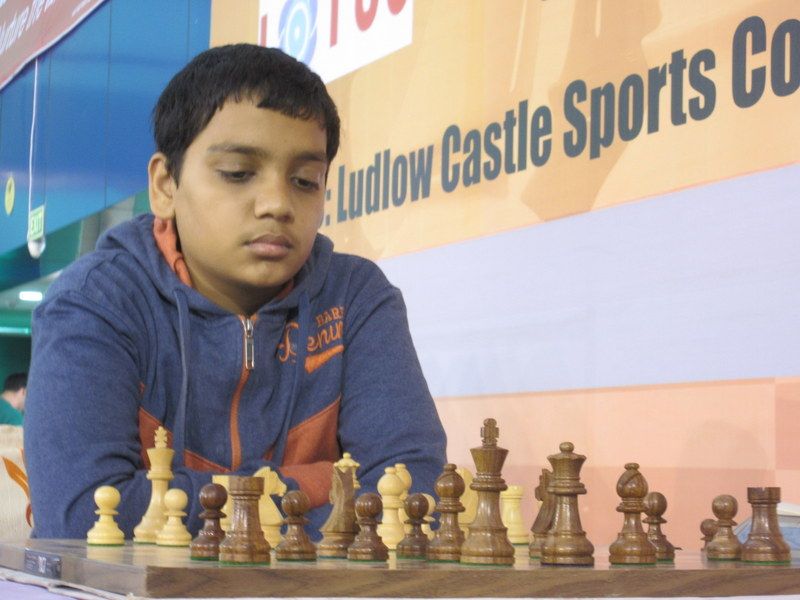 Everything is fair in love, war and time pressure. Sankalp is a 12-year-old student of Centre Point School in Nagpur, Maharashtra. ChessBase India caught up with the 2016 Under-13 National Schools Champion to understand how he approached this particular game:

This is your career's first grandmaster scalp?

Yes, I have played twice with grandmasters and this is the first time I am beating one. I had earlier held GM Saptarashi Roy Choudhary to a draw.

How did you prepare for this game?

Actually, I couldn't prepare at all as the pairings came just an hour before the round and I was already travelling in a metro to the venue at the time. I just played the game as it came.

Did he walk into your preparation?

I knew until around ten moves and the game looked complicated to me. He lost a pawn in the middlegame and then buckled under time-pressure.

Were you confident of converting your extra pawn during the game? What was your thought process around that point?

Yes, I just thought I have to play at my best and make good moves. That is what I focused on and it worked well. 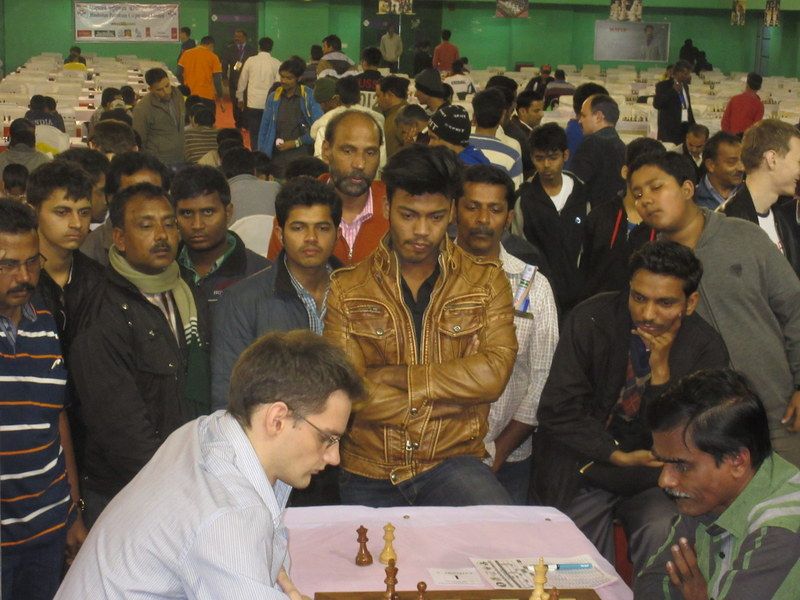 The top board clash with the Kerala legend Anilkumar Ot (2070) playing the white pieces attracted a lot of spectators; nevertheless,... 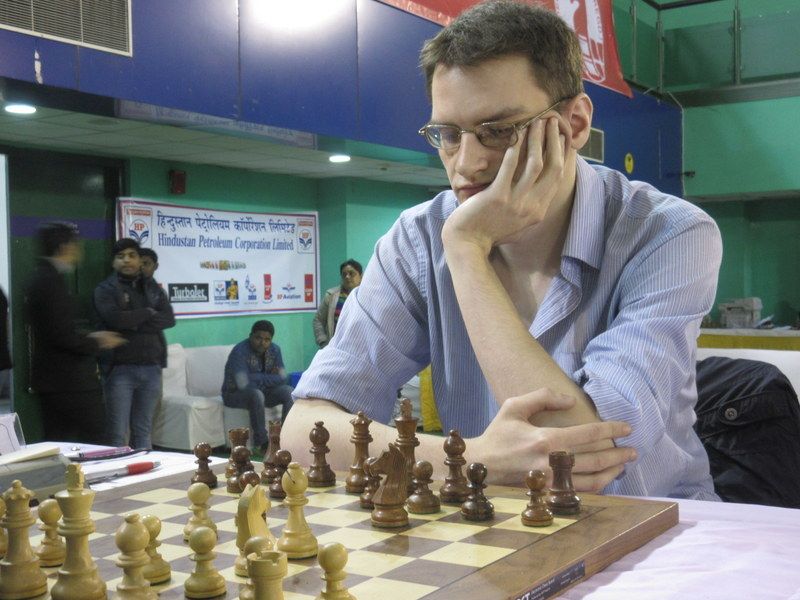 ...the top seed Russian GM Boris Grachev (2652) was through without any hiccups

In terms of the quality of games, the absolute top-seeds had nothing to worry about and they dispatched their Indian opponents, most of them underrated kids, without much ado. 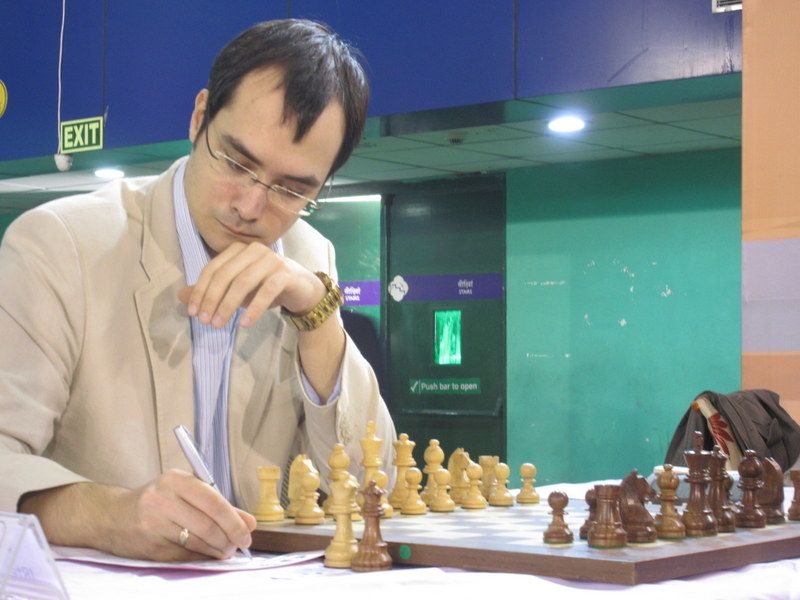 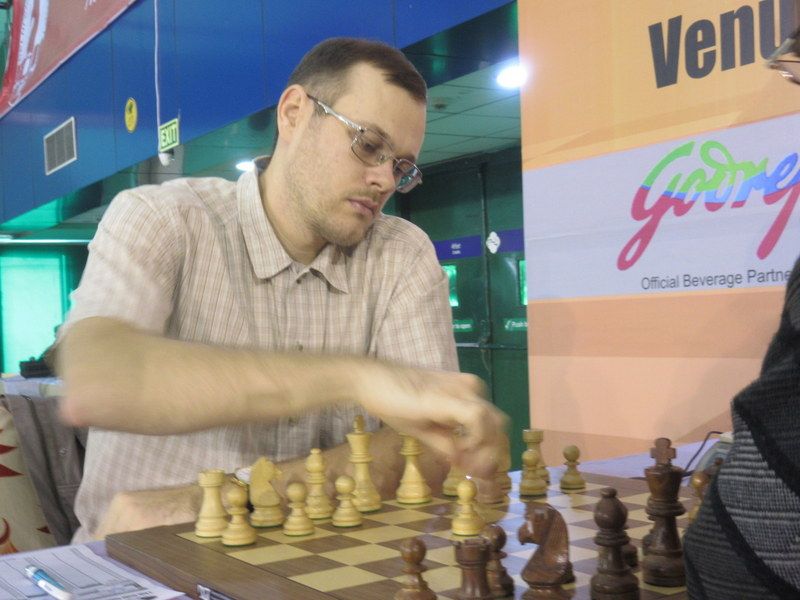 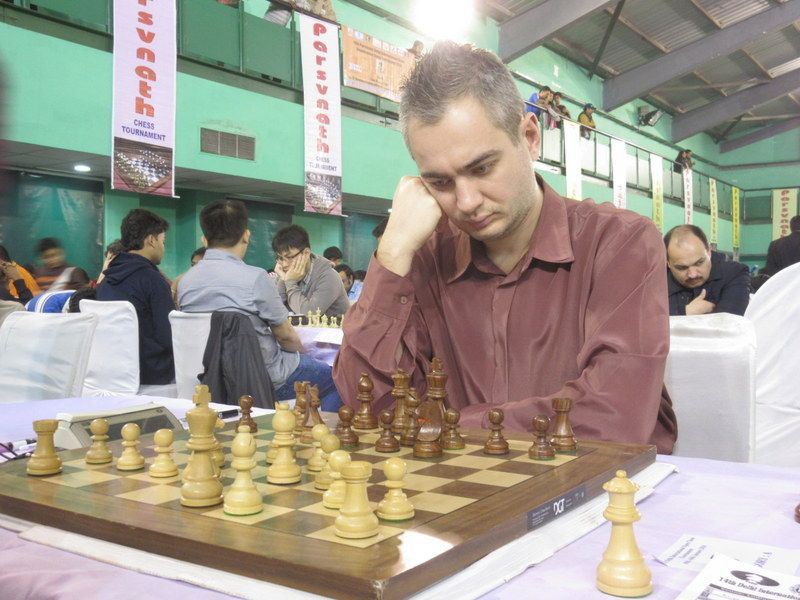 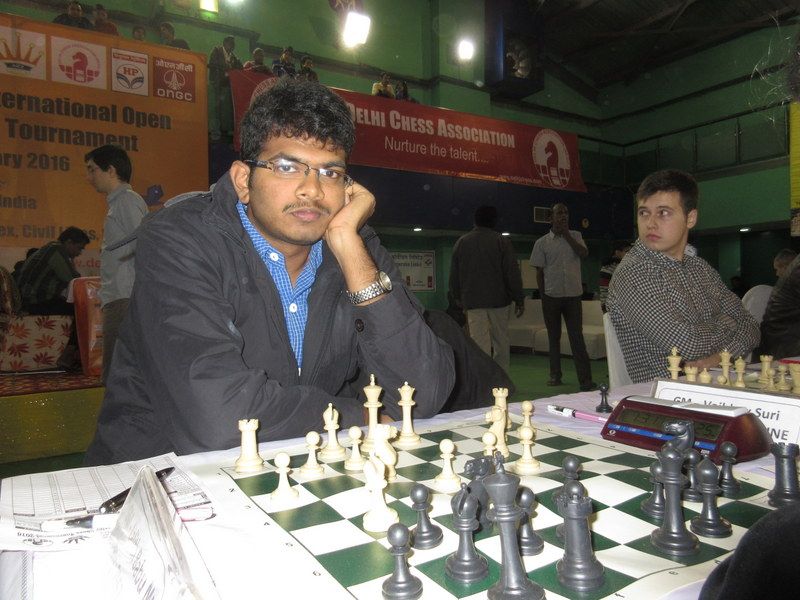 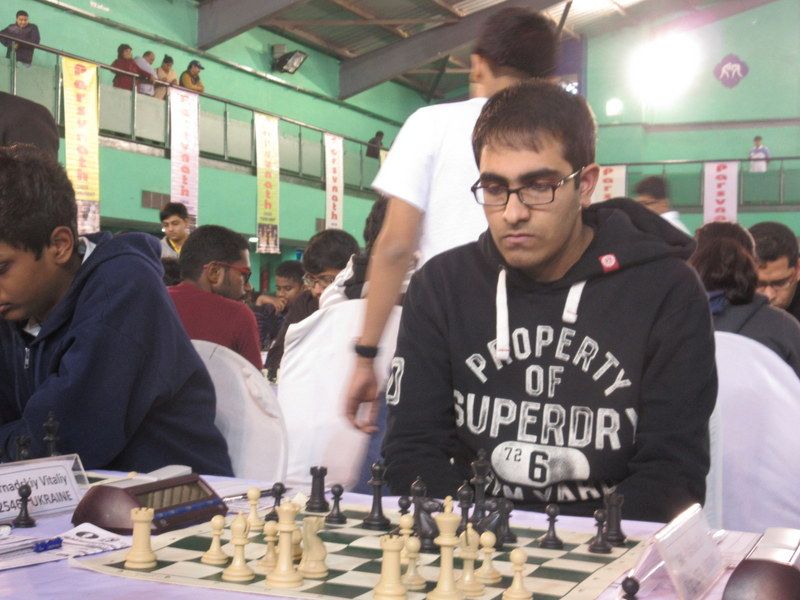 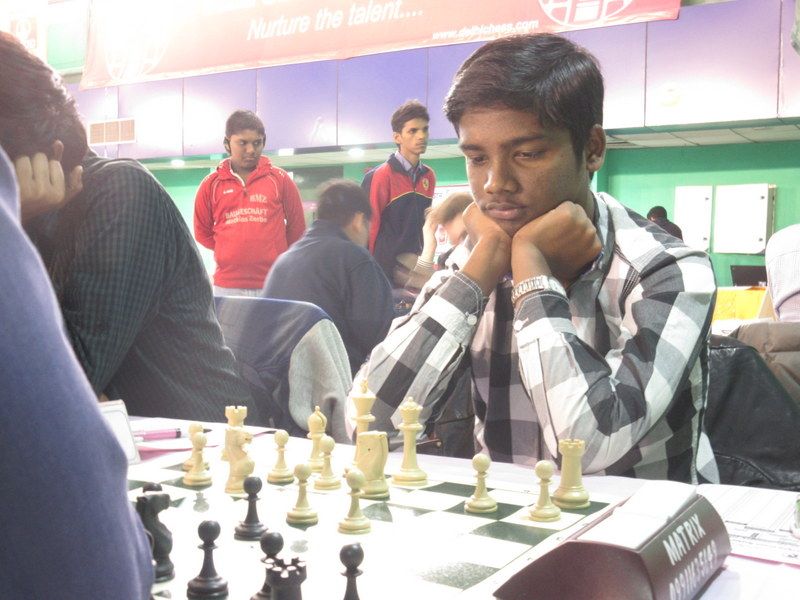 Fresh from his Qatar exploits, IM Vignesh NR (2448) will be excited to see how this tournament goes. 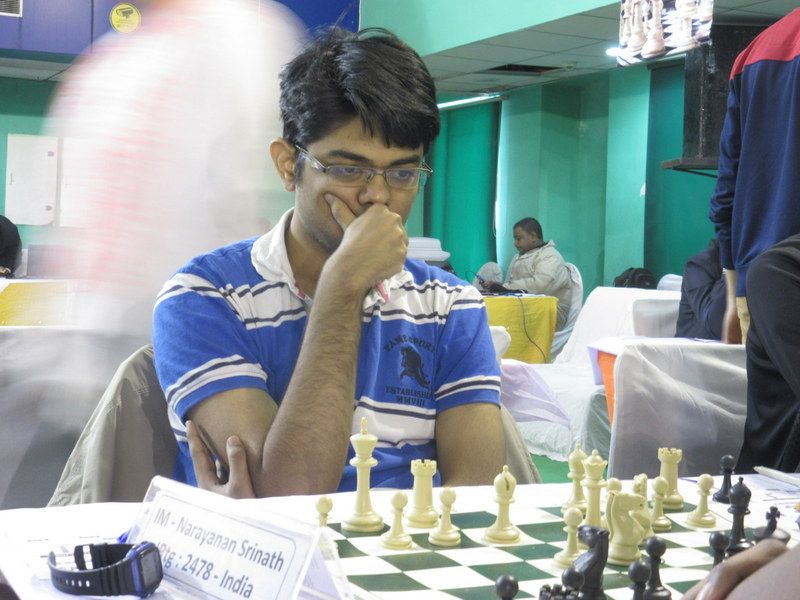 The tournament is a splendid opportunity for titled players, especially Indians, to earn their norms or complete their titles, as IM N. Srinath is bidding to. By the way, he is the one who came up with the title for this article. 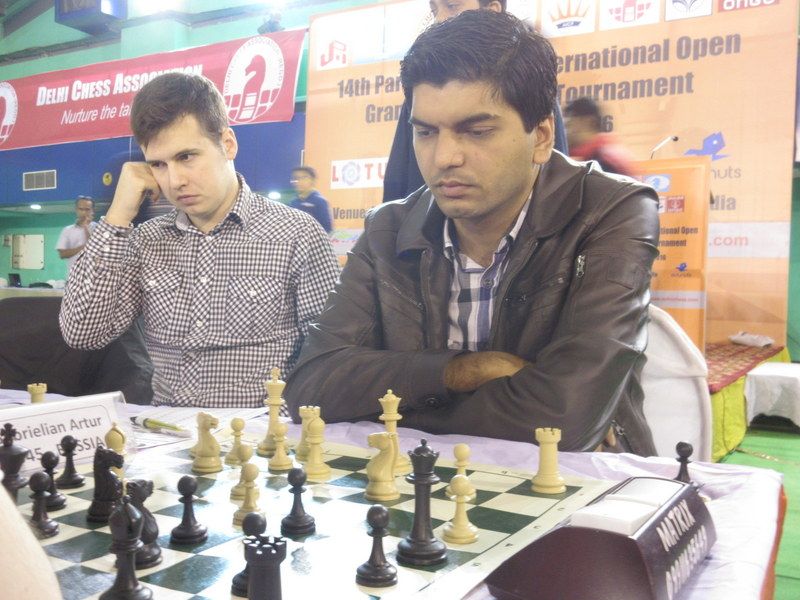 Karnataka's Vinayak Kulkarni (2043) led the pack of Indians who held their higher rated opponents to draws. He drew with GM Artur Gabrielian. 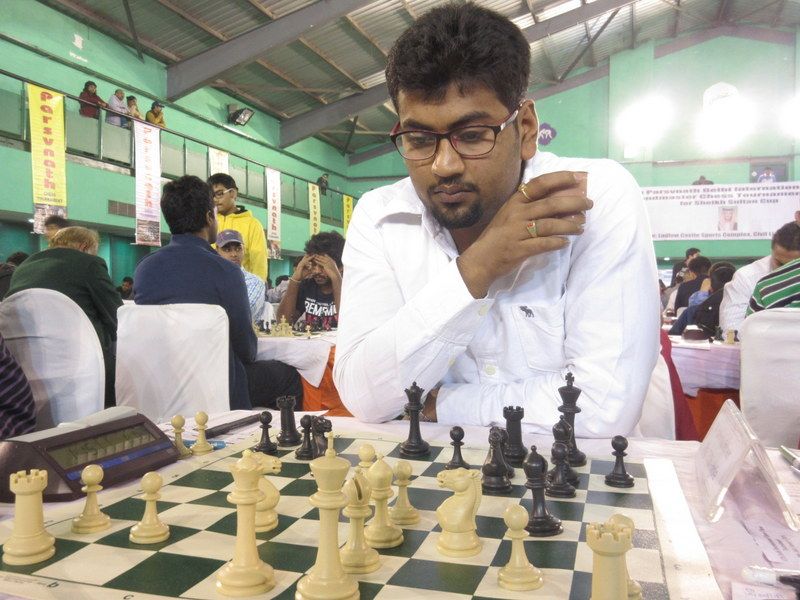 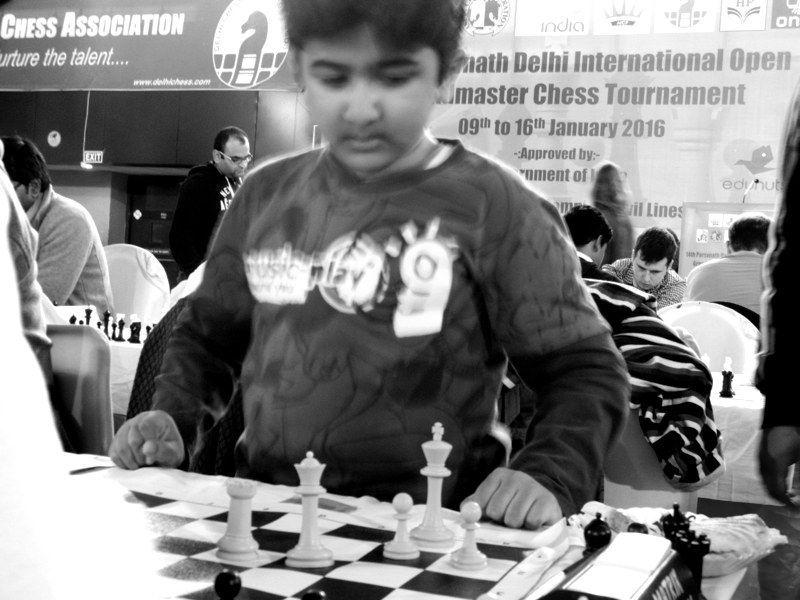 ...nine-year-old Aditya Mittal (1960) who was too excited during the game to remain calm!

Speaking of little kids playing strong chess, this tournament has been a breeding ground for a handful of Indian talents who have taken this opportunity to play, learn and improve. The 14th Delhi Open 2016 is host to some of India's finest young blood. Two of them are already category World Champions... 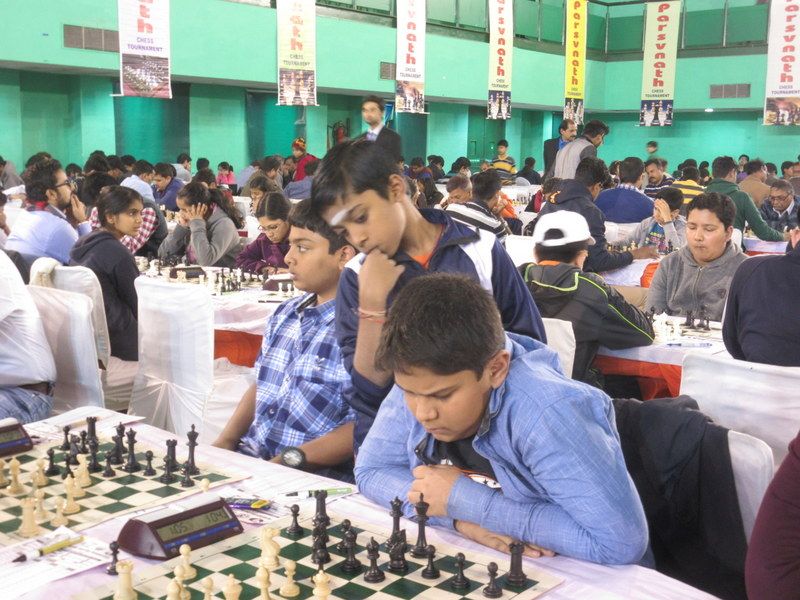 Ten-year-old Praggnanandhaa R. (2174) of Tamil Nadu checking out his own game! 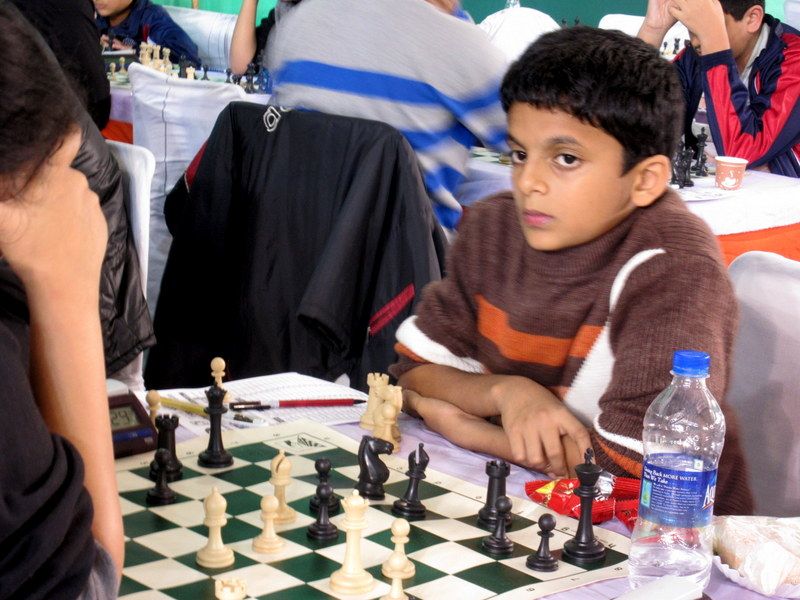 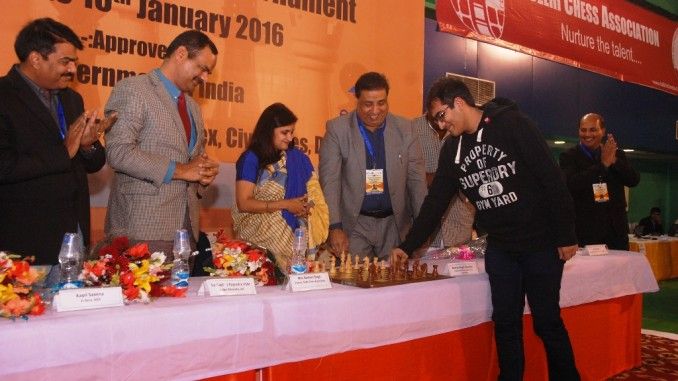 Earlier in the day, in the inaugural function, the AICF CEO Mr. Bharat Singh Chauhan made a pleasantly surprising announcement: the 15th Delhi Open will be held in January 2017, and now hold your breath, with a prize fund of Rs. 51 Lakhs! Talk about improvement...

Alongside the main event, the 14th Delhi Open is also conducting a rating tournament for players rated below the 2000 mark, with a record prize fund. Such tournaments are often a question of deciding a winner among equals; however, here too, there is no dearth of top seeds tumbling left and right.

You will find the pairings for the fourth round today and other details of the Category-B here. 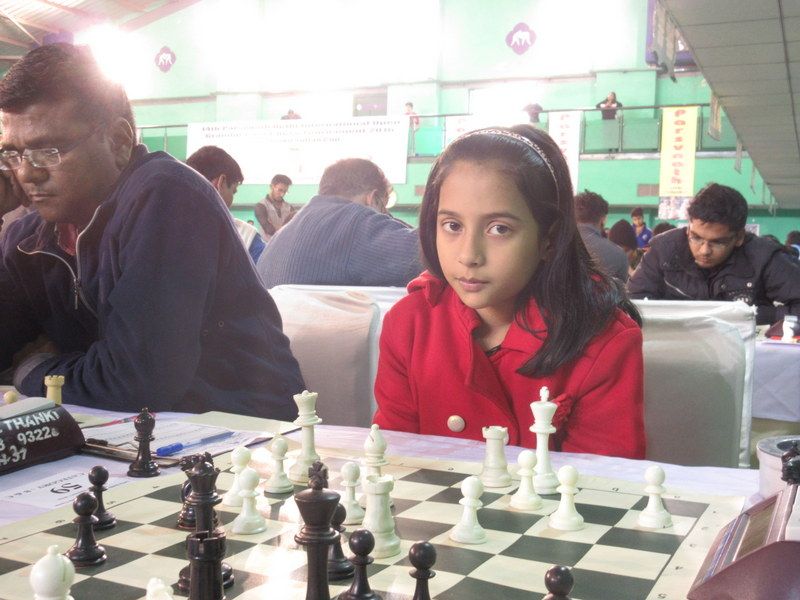 Ten-year-old WFM Divya Deshmukh (1784) has won numerous laurels at the World and National stage already and is a precious talent. 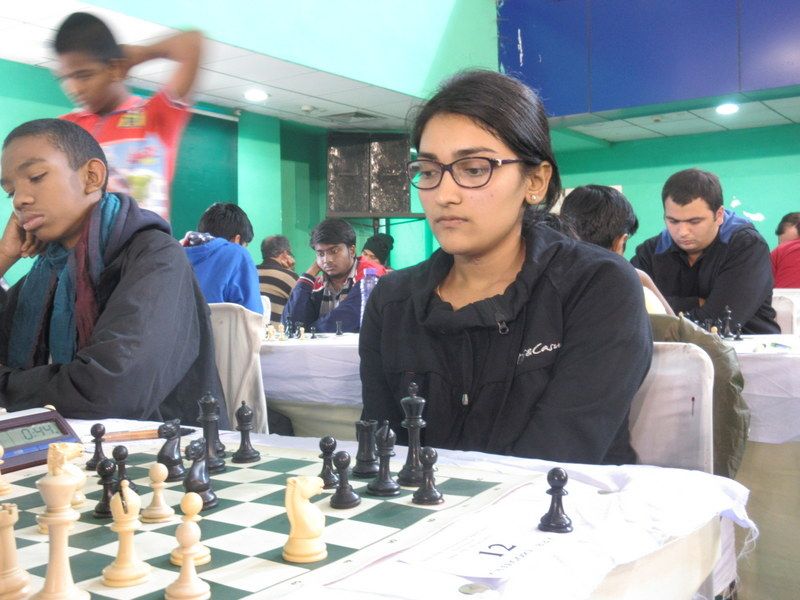 Hinduja Reddy (1953) of Telangana qualified for the Women's National A in 2014 and will be looking forward to a good performance here. 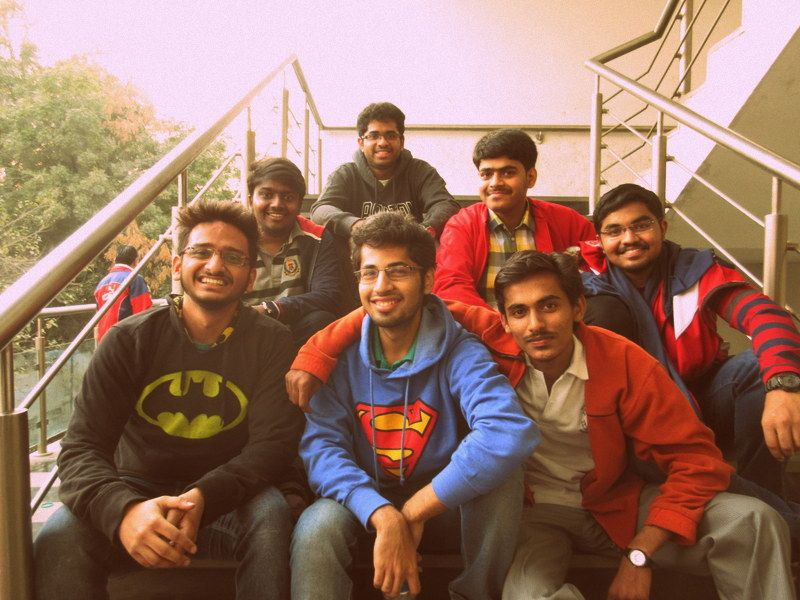 On a personal note, I was overjoyed to meet some of my oldest friends, most of them after more than two years (from left, row-wise): Batman, Superman, Rohan Joshi, Pankit Mota (navy blue), Sairaj Chittal (grey), Akshay Nehete, and Sanjeev Nair.

This is why I love chess tournaments! It helps you call on friends you've never seen, reminisce old memories and forgive your enemies! Live your life like you're never living twice.