Mining the pastures of ChessBase 14

Davide Nastasio wanted to take his game to the next level. He bought ChessBase 14 along with Mega Database 2017 and started experimenting with it. He was amazed at the things he could do with these tools. After working for a few days, he realized that working with CB 14 and Mega 2017 allowed him to not only study master games, but also analyze them, learn from world class annotators and find out errors in his own game. He now shares his experience with you in this detailed review. 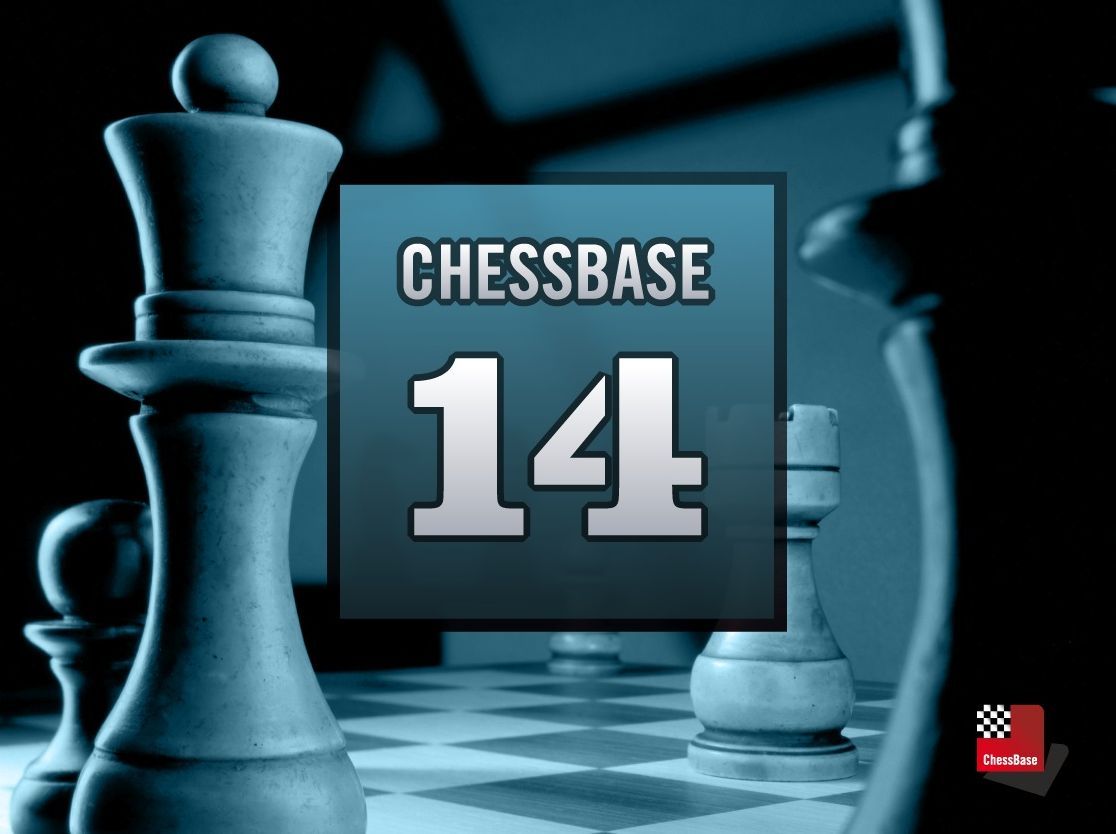 I decided to step up my game to the next level, and one cannot be considered serious if he doesn't use all the technological means at his disposal for learning and improving. In this case, I decided I needed the latest version of the famous ChessBase database program. Previously I had ChessBase 12. I discovered that there are some new features in ChessBase 14 which are extremely useful. I made sure to also buy Mega Database 2017.

ChessBase 14 and Mega Database 2017. The best combo that one can have!

Mega Database is a database of all games played in the last 500 years. The first game present in the database is from 1475! The database has nearly seven million games, with regular updates, which keeps it current with new games, every other week especially for those who have an opening repertoire, and want to see if there are any novelties.

I would like to share my excitement, and outline some new features I found quite interesting in ChessBase 14.
One friendly GM recommended me to watch games with a big rating gap. Generally these games are played in open tournaments, where for reason of pairings the first and second rounds see players rated 1900-2100 playing against 2500-2700.

The grandmaster friend told me to watch at least 500 games with such a gap. I found some monthly collection of PGNs from latest tournaments, but it was tedious at best trying to find them. In chess at the moment we have a case of Too Much Information, or TMI, as GM Soltis likes to call it. You need a tool that sorts the data and gives you what you need.

With Chessbase 14, to find the games that I needed was just a matter of few clicks. Let me show you, how I did it! I opened my Mega Database 2017 and clicked on Filter list. 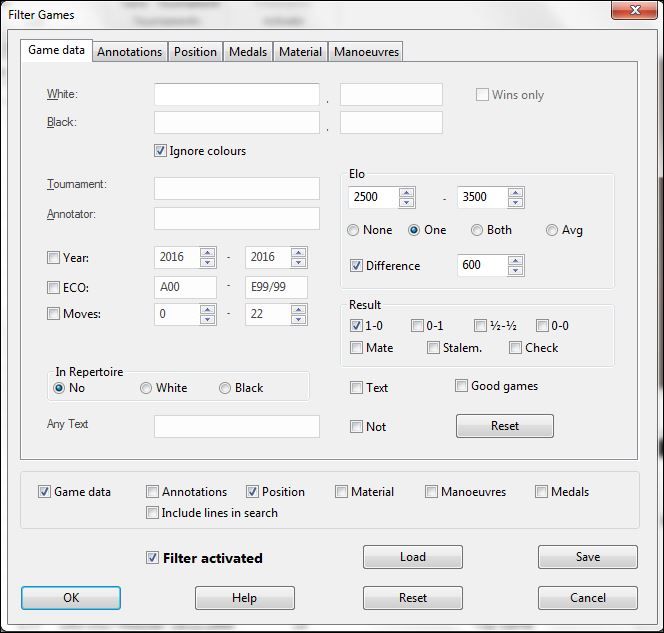 Surprise, surprise... in few seconds the Mega Database 2017, gave me over 8000 games to watch, which had such a rating gap!
Below is one of those games which I found particularly interesting, because the more I saw the game the more I realised how the GM had a better vision and calculation skills compared to the amateur, especially when evaluating the final position after many exchanges. 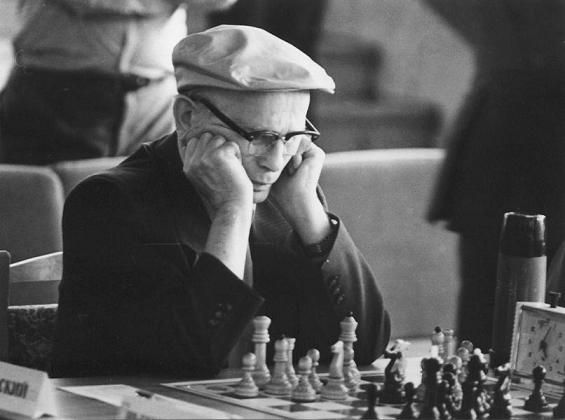 The funny thing of creating such a database is that I found upsets, like when a 1900+ rated player beats a former World Champion in a simul: 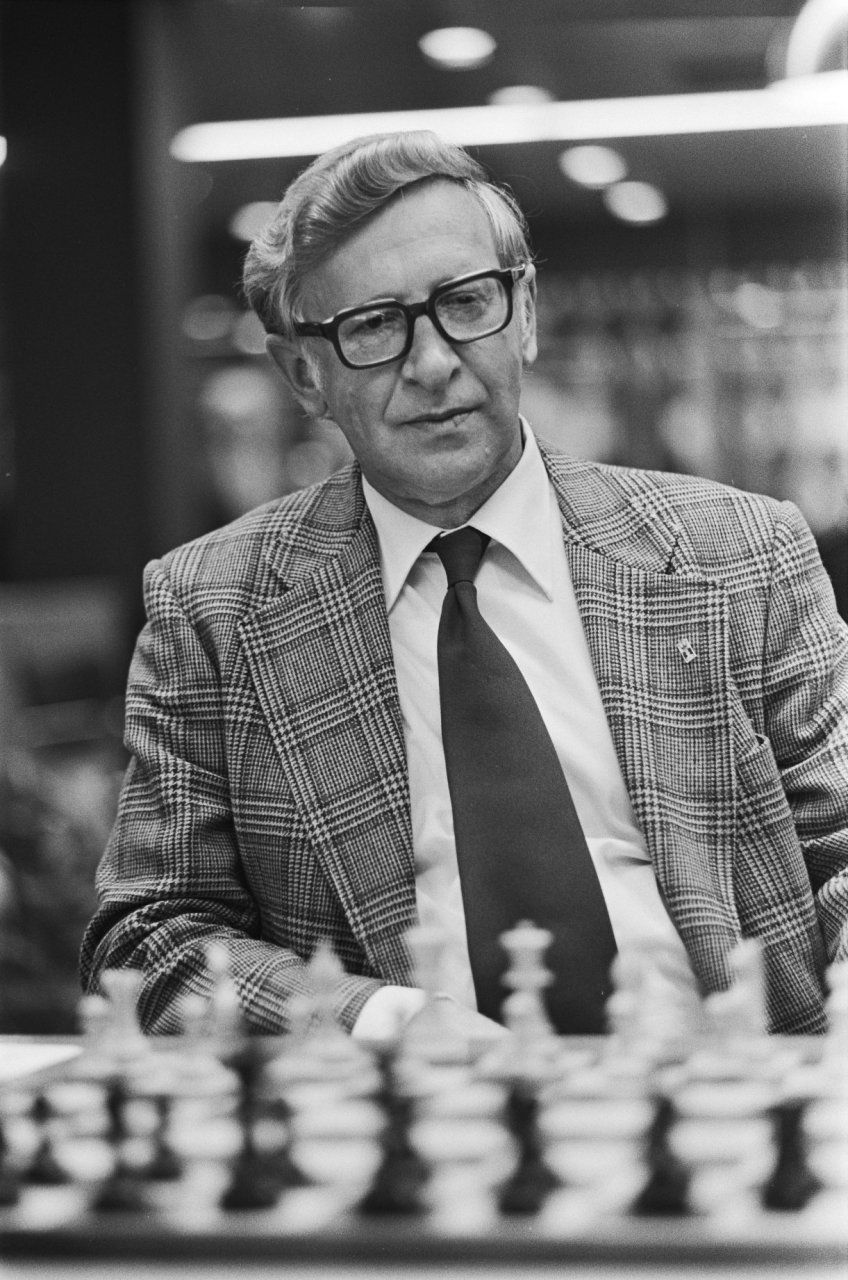 Mr. Fong likely tried to repeat the exploit in another simul given by Smyslov, but this time the former World Champion was ready, and punished him quickly!

But the surprises are not finished. There are two players which are my favorites, one is Bronstein, the other Spassky. 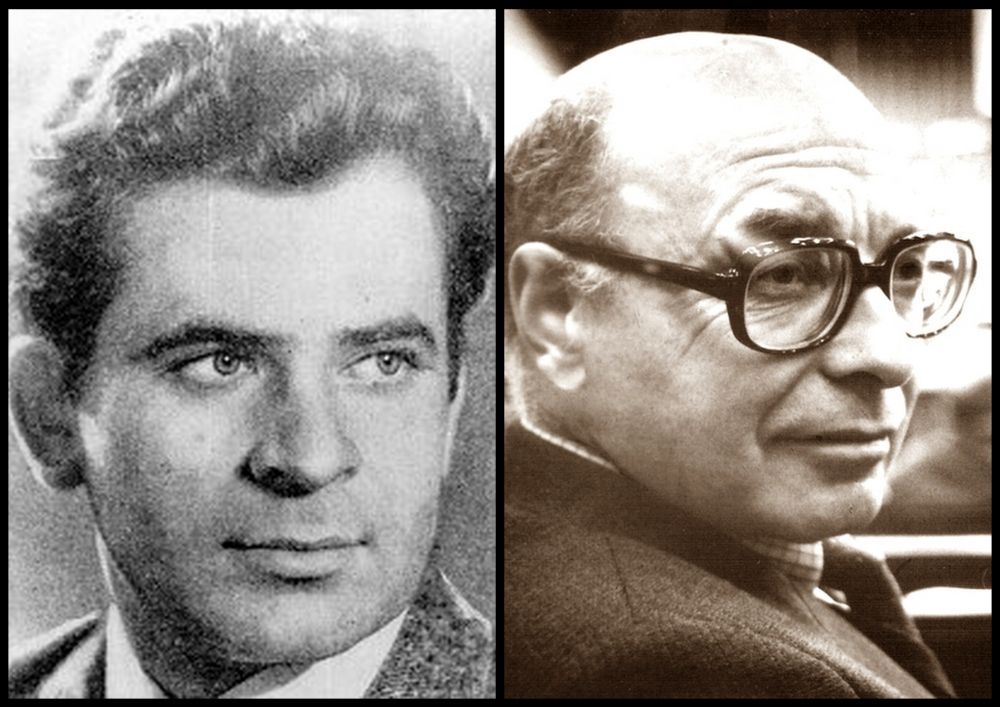 Two of my favourite players: Boris Spassky and David Bronstein

We all know what's it like to crave for something that we like, something like chocolate or pizza or a donut. Similarly, in the last couple of days I felt the craving to watch Spassky's games! I wanted to watch exciting games. Like a collection of Spassky's gems. But such book has not been written. So what to do to satisfy this chess desire? Once more Chessbase 14 is where I turn to for satisfying this kind of craving!

I opened my trusted Mega Database 2017, opened the filter game mask (ctrl+f), wrote Spassky Boris in the "Game data" tab, and 1-0 as result, then I passed to the tab: position, and clicked on "sacrifice", and once more hit Ok! 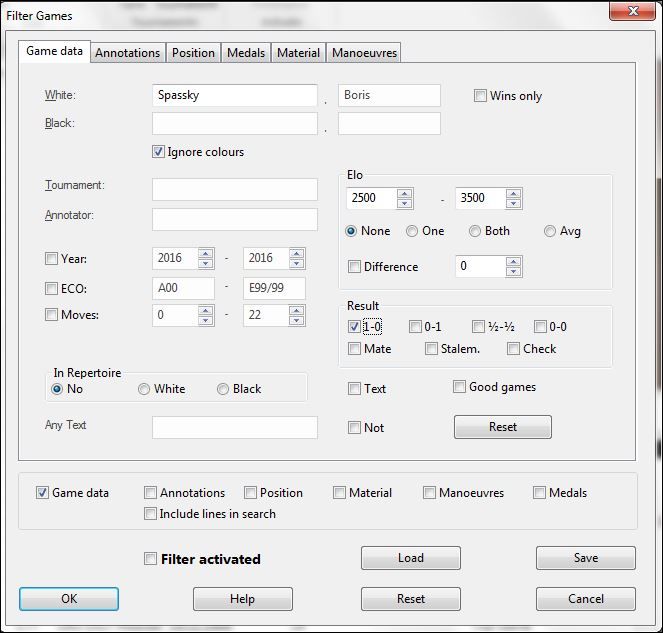 The result was more than 180 games. It would have made sense to uncheck the "ignore colour box", because I also found games where Spassky was black and had lost.

Yes, Chessbase 14 can create the book of my dreams, at my request, with a few mouse clicks! Here is one of the games played by Spassky against another great player, whose name is used to describe one of the branches of the Sicilian, the famous Taimanov. 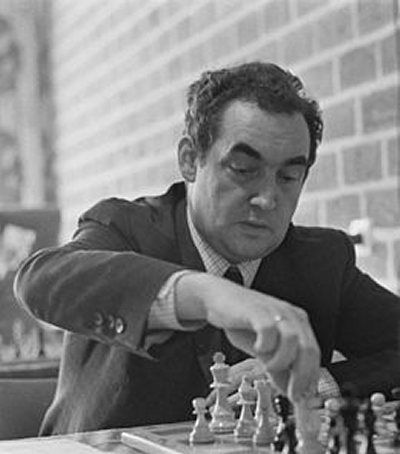 A bad day at the office for Mark Taimanov

I plan to create another database only of sacrifices played by Kasparov, once I finish studying the sacrifices by Bronstein and Spassky!

It's true that ChessBase 14 can give some amazing search results. But I don't use the new Chessbase 14 only for searches. I felt the need to read some books to help my improvement. One of these books was: My best games of chess 1908-1937, written by Alekhine. 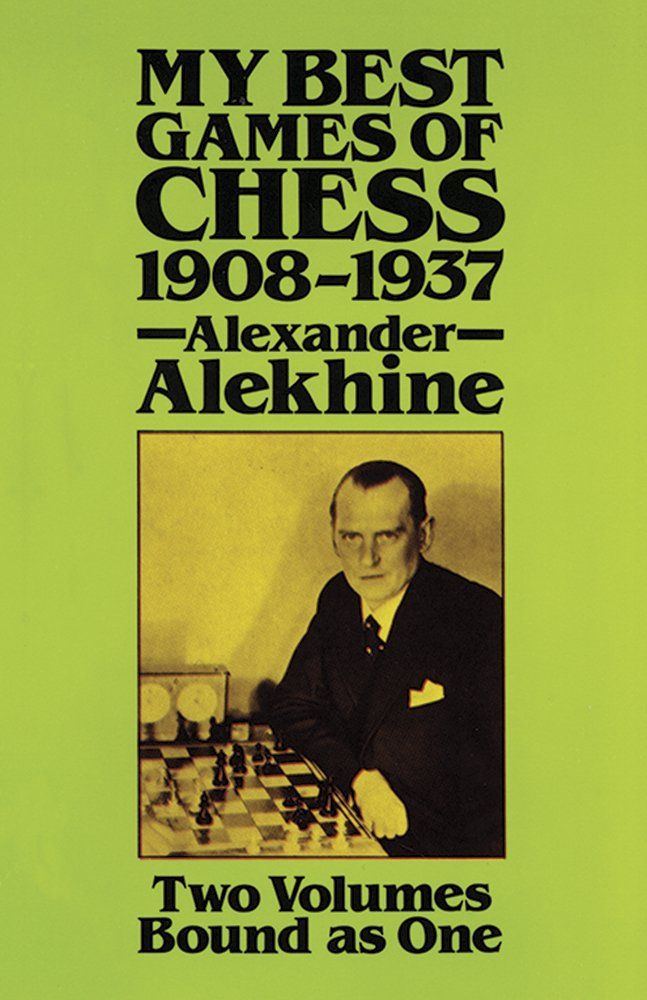 My best games of chess by Alexander Alekhine

I created a new database: Alekhine Best Games, and began manually (instead of taking the games from Mega Database) to input the games. Here I discovered a new feature. The new ChessBase 14 while inserting the moves highlights all the squares that the piece can go to. Each square has a different colour. Green is for good, orange - not so good, red is for bad, and when it becomes brown or black that means a checkmate is near, so that move shouldn't be played.

It's amazing how different hues of green, or orange show the goodness of the move. And this is important also for the opening. Here we can see how Chessbase 14 evaluates the different developing squares for the Ng1 and the Bf1. 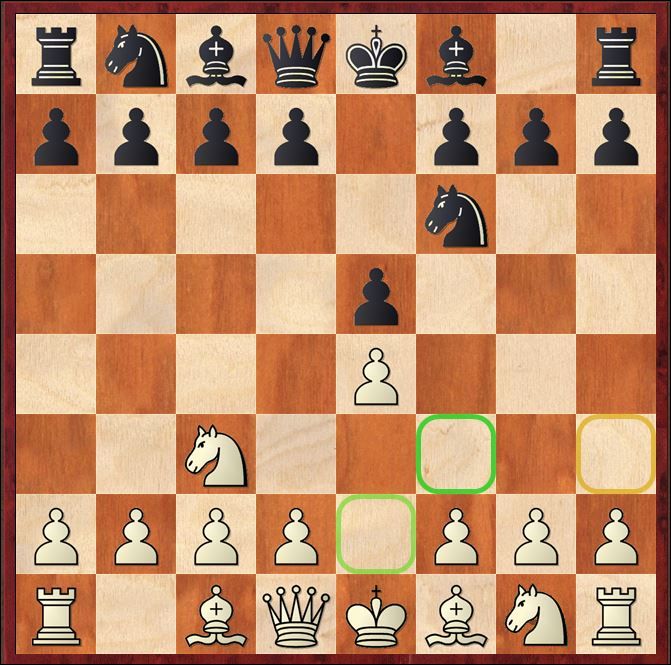 The f3 square is a darker shade of green than e2 which means that it is better to play the knight to f3. The h3 square is not so great. 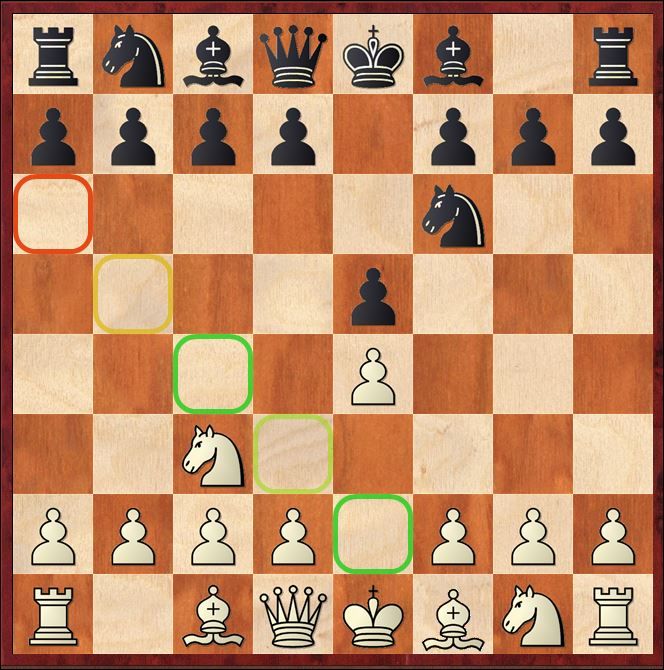 Bc4 and Be2 are to be preferred, while Ba6 is complete no!

Now, just for pleasure, I began to collect chess books, but let's say that I am on a trip, and cannot bring with me 200 pounds of books. How would I enjoy games annotated by Alekhine?

Yet again Chessbase 14, with Megabase 2017, gives me the possibility to have all chess knowledge on my computer. I open Mega Database 2017, go under the "Annotator" tab, and look for Alekhine, and I find 110 games annotated by him.

I select them all, copy them, and make a new database with just the games annotated by Alekhine. This is like a book written by Alekhine! Maybe better, as I can easily play over the moves on the screen, something which cannot be done in the book! 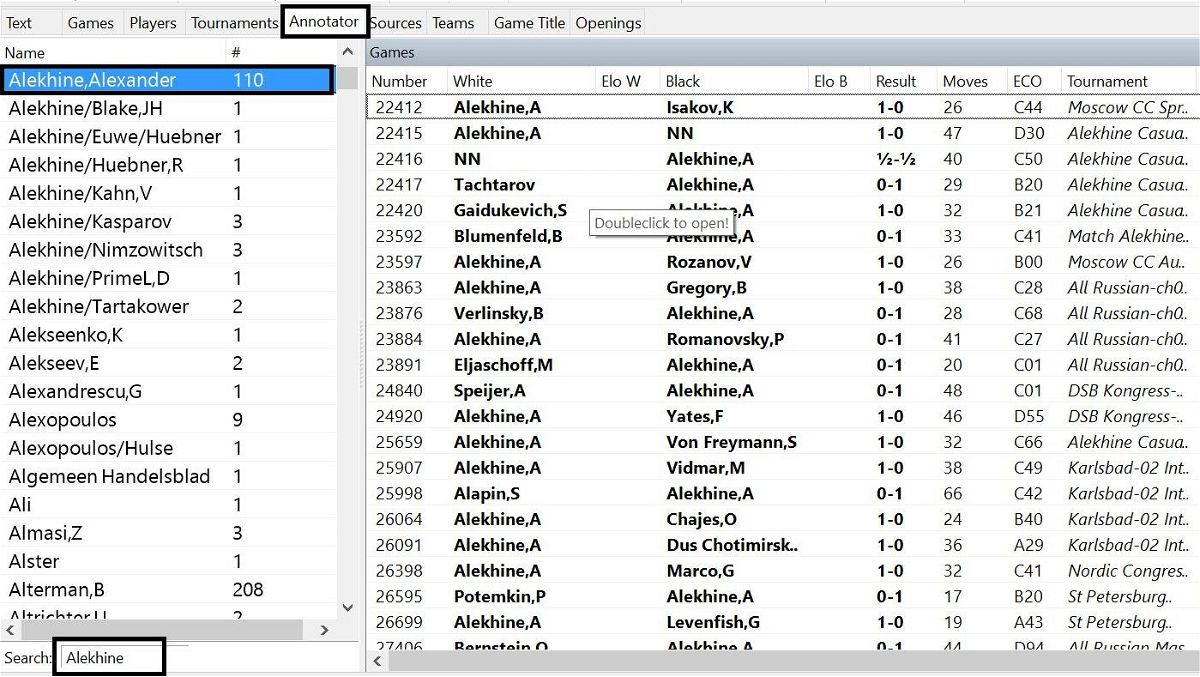 Under the "Annotator's" tab at the bottom in the text box you type the name Alekhine and you get all the games annotated by Alekhine! Most of them are his own games.

Out of curiosity, I typed the names of GM Ftacnik and Marin (one of my favourites and realized that the Slovakian GM has annotated 4961 games, while the Romanian has 1500!

I would like to show one last cool new feature. It's called the "Tactical analysis". It can be used to analyze a single game, or many games. If used for one single game one just needs to open the game, and go to the tab analysis.

Click on tactical analysis, and a new window will open. 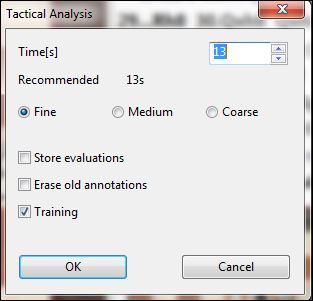 You can choose the amount of time to be given for each move. 13 seconds means quite a bit of time and ChessBase 14 will analyze the game quite well.

The game will be automatically analyzed, and some training questions will be created. Chessbase 14 will also defines the type of endgame, and shows some of the strategical maneuvers of some of the pieces.

But the interesting part is not a one game analysis. During the day I play several games online, then at night, before going to sleep, I highlight the games I played, and want them analyzed. 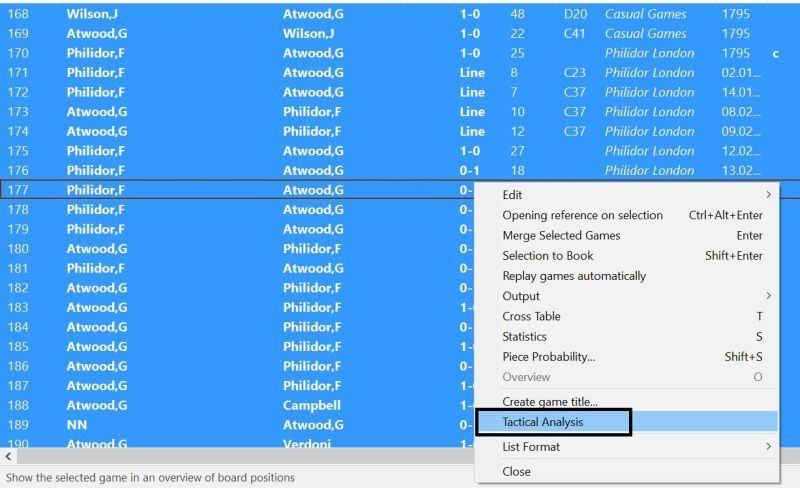 I select all the games in the database and right click and select Tactical analysis.

It can take few hours, for this reason I do it at night, but in the morning when I wake up, I find the games ready for review, already labeled with medals, which indicate the type of tactics, sacrifices, or strategical maneuvers I can find inside, and of course with many training questions to solve for both sides. For example in the following position the blue arrows were created by the engine which analyzed the game, to show the strategic idea White had: 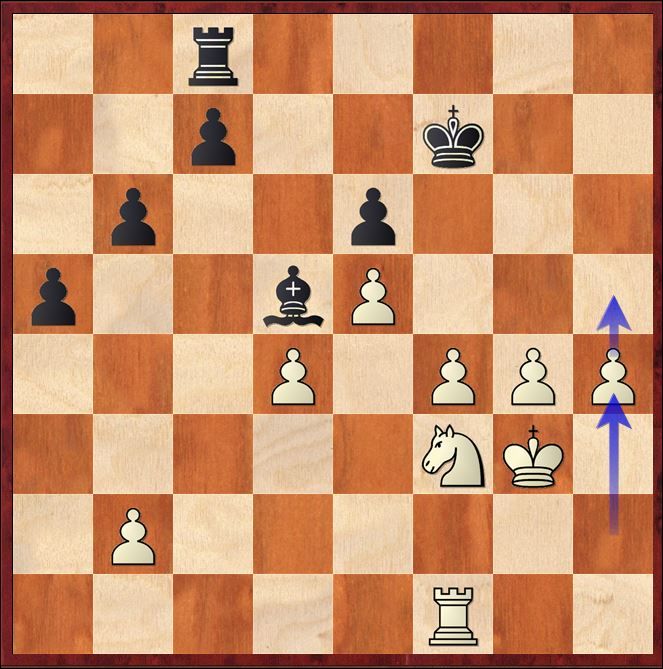 Passed pawns must be pushed!

Once I open the game, going over it, I find some points where I need to guess the correct move, like in the following image: 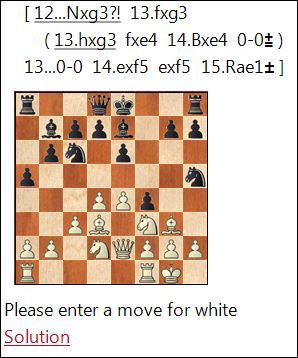 And until I don't find the right move, the program doesn't let me continue to see the game, making this kind of training quite useful to see my common errors, and how to solve them.

The real advantage of this training is that it helps us find improvements in our own games. We also realize the type of middlegames and endgames we should focus our training on. Such training should be based on the themes, and patterns we would encounter originating from our opening repertoire. We would learn watching games of great masters, but nothing leads to faster improvement than learning from your own games. The best way is that we save our games in ChessBase 14, then we ask the engine to analyze them, and the engine creates training questions, that is quite an interactive, and a focused way of learning!

Time to close this review: ChessBase 14 is an essential tool every serious student must have, in order to progress on his chess journey. I Hope you will enjoy this new Chessbase 14, as much I'm enjoying it now! And at the same time reap the benefits of its tools for your chess progress.