The oldest chess association in India, Coimbatore District Chess Association celebrated its Platinum Jubilee just a few days ago. Apart from creating huge stars in the country, CDCA was also responsible for Vishy Anand becoming a GM - the five time World Champion made his final GM norm in the Sakthi Finance GM tournament in Coimbatore! This article pays homage to the wonderful talents produced and the incomparable work done by this Association.

The oldest Chess Association in India – the Coimbatore District Chess Association celebrated its Platinum Jubilee recently. Founded in 1940, the first President of the Association was Sri GK Sundaram (1915 – 2009), uncle of India’s Formula 1 driver Narain Karthikeyan, and GKS also became the President of Tamil Nadu State Chess Association, the forerunner of chess in India, later. Coimbatore has had a telling impact on the growth of chess in India and particularly the Tamil Nadu state. Though much of the activities here date back to 1920s, the history was carried down by mouth without solid proof.

During the tenure of 75 years, Coimbatore DCA has produced several national champions, state champions and organised several national and international tournaments. The man behind the growth of chess, even before the advent Vishy Anand to chess was Sri. N. Mahalingam (1923 – 2014) from Pollachi, an agricultural and industrial town in Coimbatore district, who served All India Chess Federation and Tamil Nadu State Chess Association as president. 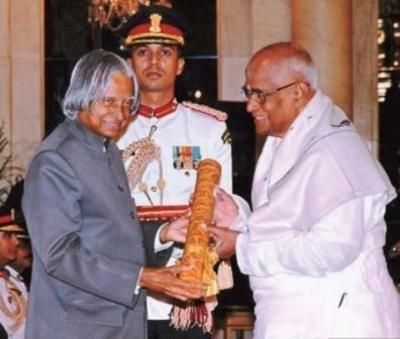 Dr.N. Mahalingam receives an award from the then President of India Dr. J. Abdul Kalam

It was Dr. Mahalingam who announced hefty cash incentives to achievers of IM and GM titles, not from Government or association, but from his own pocket. The ardent chess lover had matched wits with several grandmasters over the board and was a keen follower of the game. 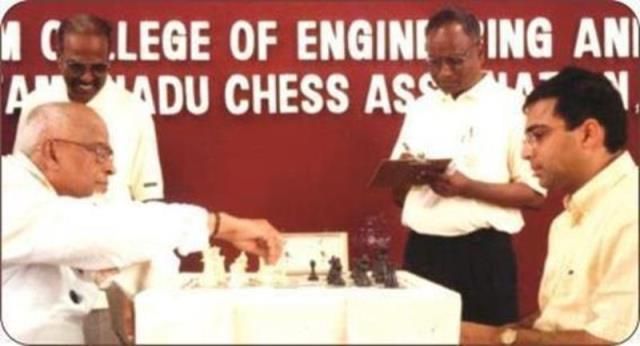 Coimbatore shot into prominence for another reason – five times world champion Viswanathan Anand achieved his third and final GM norm to become the first grandmaster of India in Sakthi Finance GM tournament here in 1987. Anand has more successful incidents related to Coimbatore – he won the Asian Junior Chess Championship at Coimbatore in 1984. Later, when Anand emerged World Junior Champion in Philippines (1987), his team manager was Sri T.P. Narayanan, a dedicated coach and administrator, who was the secretary of Coimbatore District Chess Association. Narayanan also served as secretary of Tamil Nadu State Chess Association. 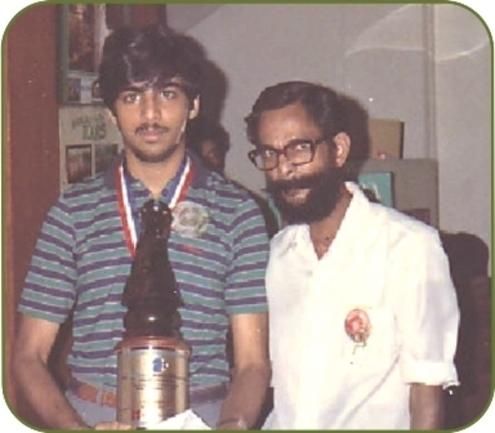 When Anand emerged world Junior champion in 1987, his team manager was Sri T.P. Narayanan from Coimbatore 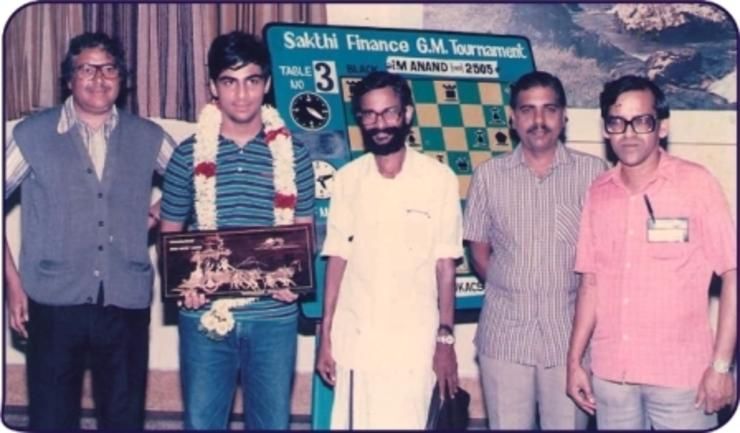 Coimbatore has not lagged behind in producing chess players. Guess who the boy is?  He was born and brought up in Coimbatore. He is...

PV Nirmala (right), played for India in the Chess Olympiad at Dubai in 1986 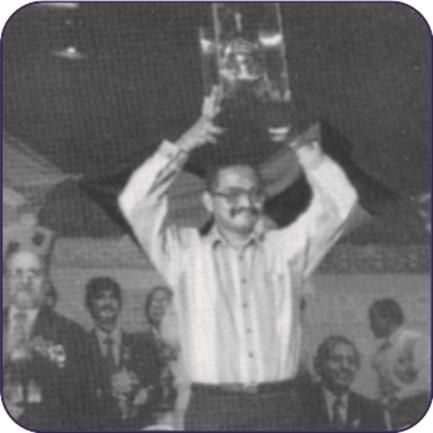 Former Commonwealth champion IM P. Mithrakanth is a calm and quite player. His chess career has helped him to get a job in NLC as Sports officer.

We showed you a game above where Anand beat Mitrakanth is just 27 moves. Just a year later Mitrakanth did better by beating Vishy in 26 moves! Here's the game: 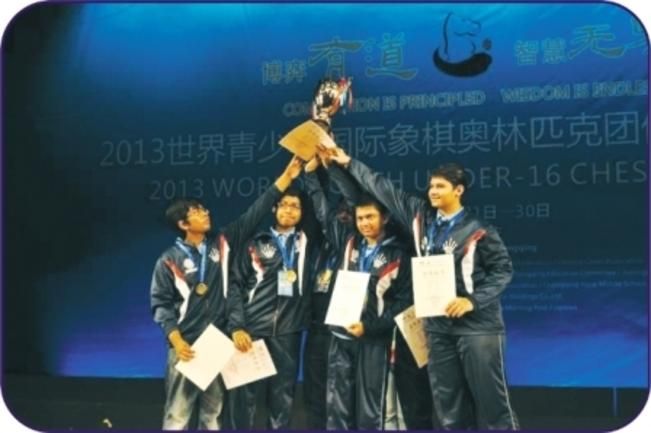 Gireman Ja (left), contributed to the gold medal winning performance of India in the World Youth Olympiad in China (2013). He has also won several state titles. 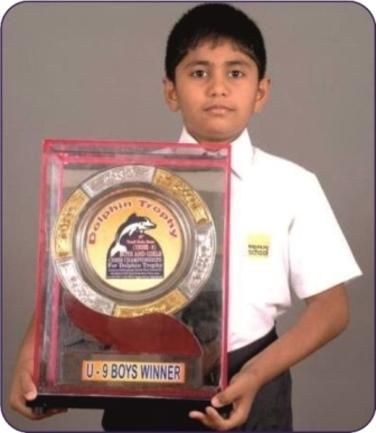 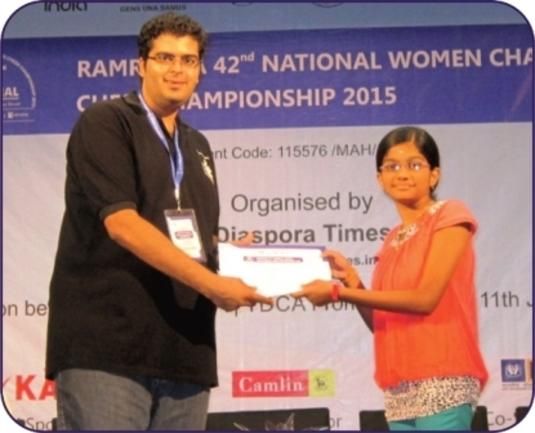 K Priyanka played in the National Women Premier championship 2015 held at Kolkata. R. Ganesh, who represented Indian Under 15 team in the exposure trip to Russia is also from Coimbatore 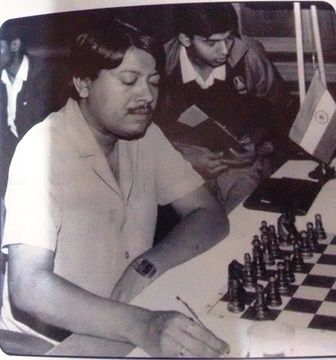 IM Raja Ravisekhar who worked for Lakshmi Mills in Coimbatore won the national championship twice, in 1976 and 1979 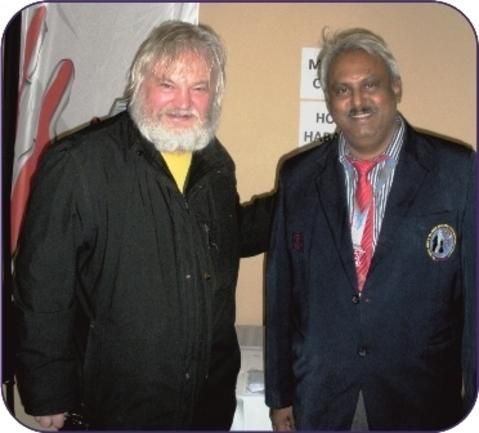 The present secretary of the district association is V. Vijayaraghavan, an experienced international arbiter, who officiated in the World Youth Chess Championships in Slovenia in 2012, is seen here with the legendary Arthur Yusupov.

The Platinum Jubilee celebrations were organised in a grand manner. Tournaments were held for various categories and sections, for which prizes were awarded on this day. Outstanding achievers of the district were recognised by presenting mementos. The function was presided over  the President of Tamil Nadu State Chess Association Dr.M. Manickam (of course, from Coimbatore), the illustrious son of an illustrious father Dr.N. Mahalingam. 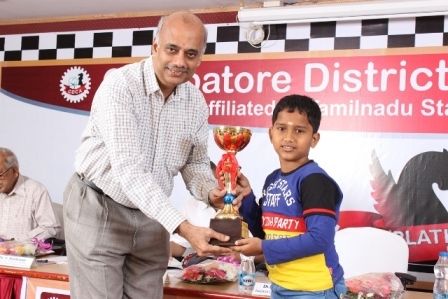 Dr.M. Manickam, President of TNSCA presided over the function

Shri D.V. Sundar, Vice President of FIDE, nine times national champion IM Manuel Aaron, Sri.V. Hariharan were the chief guests from the chess fraternity. Mr. Jayabal, President of CDCA and Mr. Rajesh Doraiswamy from Salzer Group of Industries, the main sponsor of the event also adorned the dais. Mr.D.V. Sundar elaborated the contributions of Dr.N. Mahalingam to the development of chess in India and Tamil Nadu. Eighty years old Mr. Manuel Aaron narrated the interesting incidents that had happened during national and international tournaments in Coimbatore. 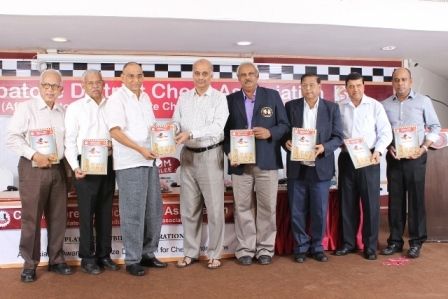 The credit of organising the Platinum jubilee functions and also the several tournaments in connection with the occasion goes to Mr. N. Jayabal, President of the district association, Mr.V. Vijayaraghavan, the secretary and Mr. A. Muthusamy, former state champion and also the convener for the entire show.

ChessBase India congratulates Coimbatore District Chess Association for their humongous contribution to the development of chess not only in the state of Tamil Nadu but in the entire nation.

Prof. Anantharaman is not only the best International Arbiter in India but is an extremely well educated and learned person, who was the Head of Chemistry department in the college where he used to teach a few years ago. He is a member of Swiss pairings Programs Commission, FIDE, and has served as chief arbiter in