International Master from Goa, Anurag Mhamal, had a splendid outing at the XXVII Open Internacional de Gros held in San Sebastian, Spain. Scoring 7.5/9, he not only bagged first place but also a GM norm - his fifth GM norm! But that's not it, he also gained 21 Elo points, taking his rating to 2498. You heard it right, just two more points and Goa will have its first Grandmaster and India, its 48th! And the best part, he's playing at the Benasque Open which started yesterday. So all of this might just happen within the next few days!

After nine rounds of the XXVII Open Internacional de Gros, Anurag Mhamal emerged as the clear winner scoring an undefeated 7.5/9. The tournament was held from June 23-30, 2017 in the resort town of San Sebastian in Spain. With this stellar performance, Mhamal was able to skyrocket his rating by a whopping 21 points and has reached 2498 in live ratings. What’s all the more important is the fact that he has already won five Grandmaster norms – two more than the required number! This means the Goan lad is merely 2 Elo points away from becoming Goa’s first and India’s forty-eighth Grandmaster. 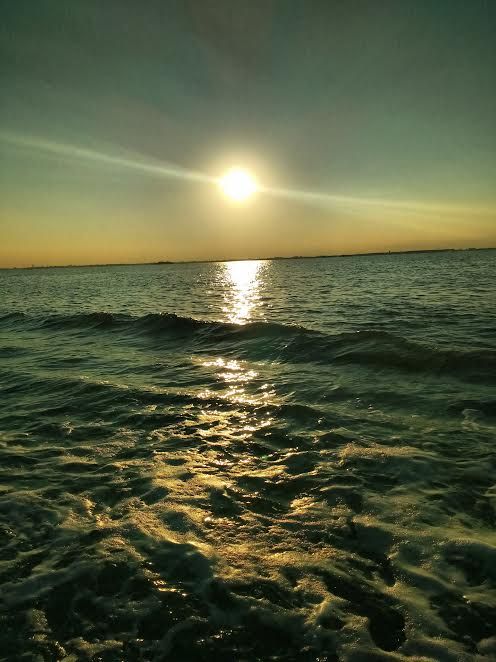 The picturesque sunset of the resort town 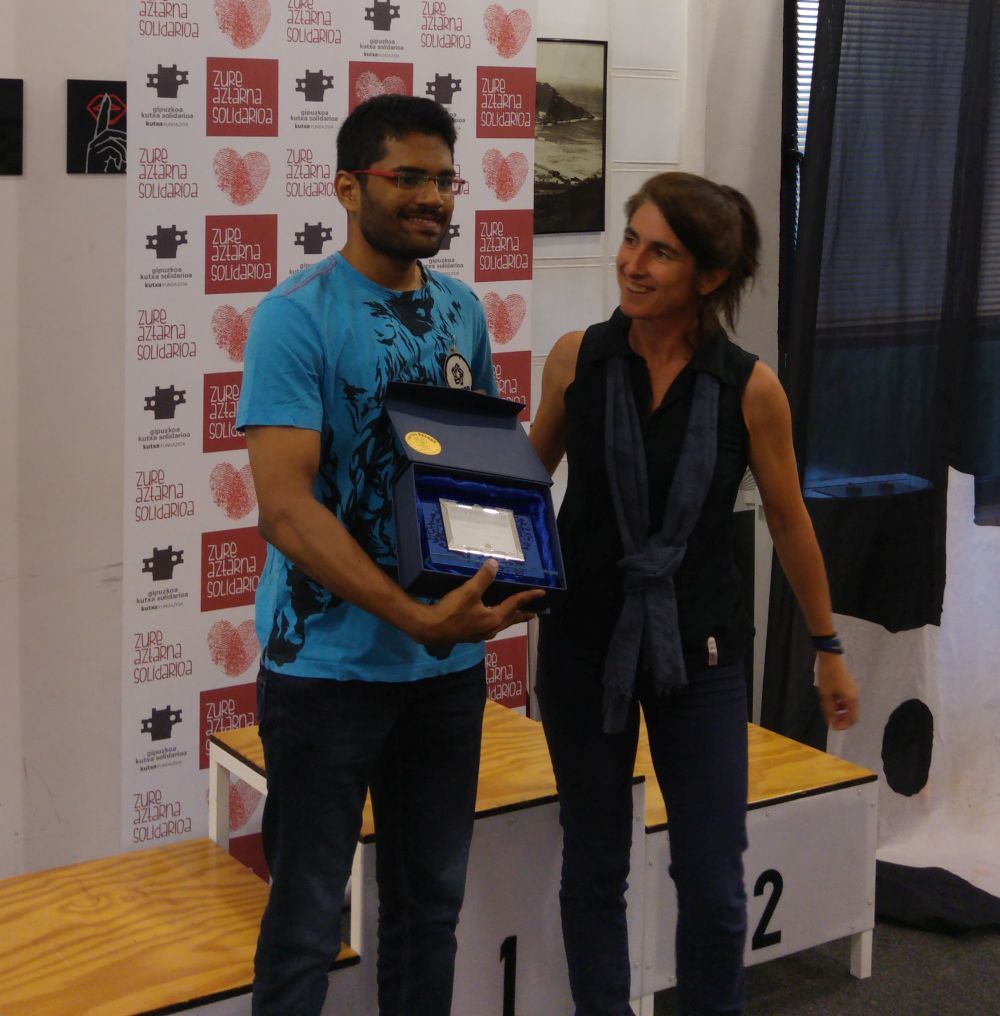 Talking to ChessBase India about his win, Anurag said that he’d kept his schedule such that he had ample rest days between his tournaments in Europe this time and this really helped him stay focused. He has been in Europe since the 8th of June and has played two tournaments so far, the first one being Forni De Sopra International Chess Open in Italy. He went on to add that his penultimate round game against the Spaniard, Alfonso Romero Holmes was crucial for him in order to stay in contention for the title. Things got tough as Mhamal made a few inaccuracies early in that game and ended up in an inferior position. But eventually he was able to create some threats and wriggle out of danger. As play proceeded, Holmes failed to find the most accurate continuations and later simply crumbled under the shadow of time trouble. With this win, Mhamal was a clear point ahead of the field. Since a draw would have sealed his first place, he played it safe and took a draw in 20 moves against the English GM Glenn Flear with the white pieces. 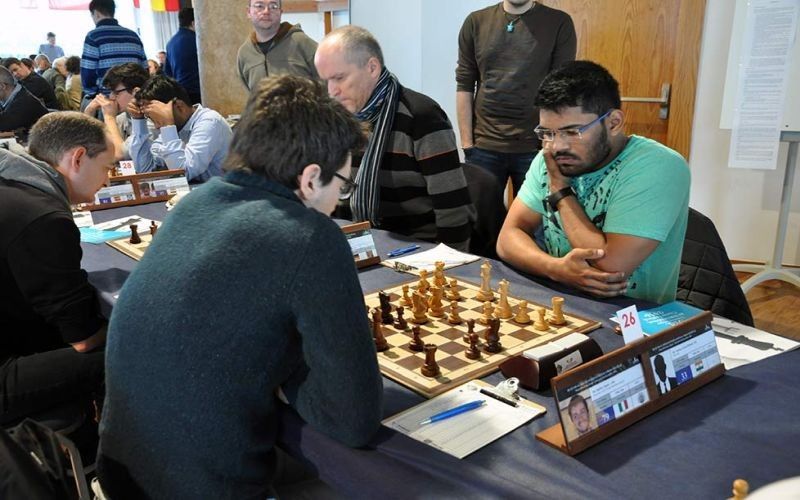 Mhamal was only a couple of points shy of the coveted 2500 rating mark going into the final round. But in a very pragmatic manner, he gave precedence to winning the tournament over completing the requirements for his GM title. Sharing his thoughts about this, he said, since he is going to play in the Benasque Open tournament after this one anyway, he will have many more shots at gaining those Elo points. It is just amazing how calmly he is heading towards achieving the greatest milestone of his career. 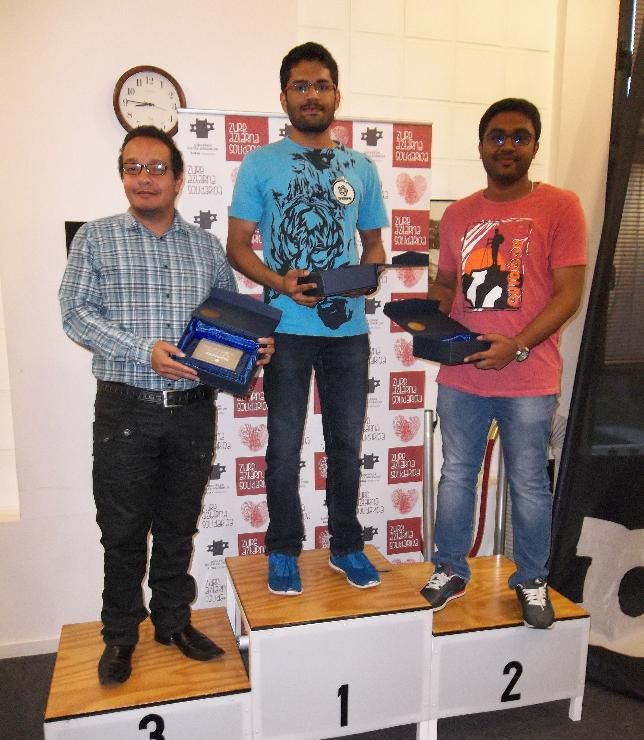 As for the tournament overall, Anurag seems to be extremely satisfied with his results. And when asked about his favourite game from the event, he said his fourth round game against his fellow countryman, G A Stany (who finished second at the event) was his favourite. Also, he has been kind enough to annotate the game for our readers. Do find it below.

As mentioned before, Anurag plans to play the Benasque Open which begins on the 6th of July. This would be the third and final tournament of his Euro trip. Just two points away and with 10 rounds in hand, it is quite probable that this 22-year-old might become the first GM from Goa very, very soon! His form has been tremendous in this year. And given that he has already won a strong open tournament just last week, we have all reasons to hope that he will become a Grandmaster within a span of a few days! 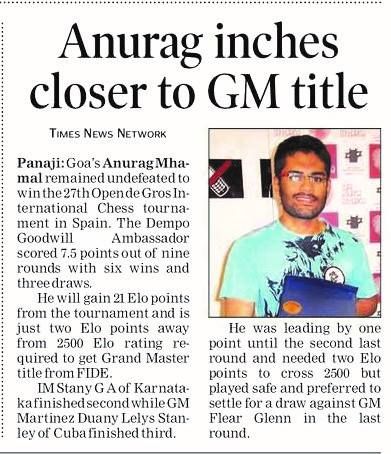 Coverage by one of India's biggest newspapers - Times of India 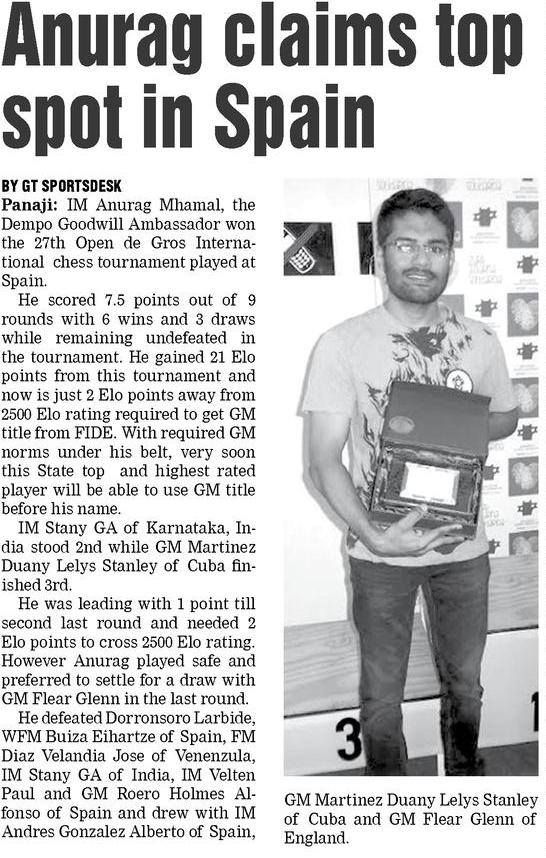