Anand third at the Candidates 2016

It is said that the game of chess is getting younger and younger every day. But here is a 46-year-old man who not only fought for the top places in a grueling event like the Candidates, but was matching blow for blow against opponents nearly half his age. Vishy Anand provided us with some edge of the seat entertainment at the Moscow Candidates, finishing with 7.5/14 and a respectable third place. He went home richer by Euros 81,500! Here is an article which gives a summary about the tournament from the point of view of the Indian Champion.

“Bit of a roller coaster. I had some very good moments. In the end third is a good result, but I think I spoilt some really good chances. It could just have been a dream tournament. Then again you cannot pick and choose – you cannot just keep the wins and say the losses shouldn’t have happened. Mixed feelings but at least I will go back with something positive”, this is how Vishy Anand described his experience at the Candidates 2016. Truly, it was a complete roller coaster not only for him but for all the millions of his fans back home who were eagerly following each and every move of the fourteen games that he played at the event. Anand finished with a score of 7.5/14 and had to settle for the third spot behind Sergey Karjakin and Fabiano Caruana. Karjakin beat Caruana in the last round to win the tournament and also earned the right to challenge Magnus Carlsen to a World Championship Match in November 2016. Vishy Anand scored one point less than Karjakin but was definitely the most uncompromising player at the event. He had the most number of decisive games. In such events, it is natural that competitors remain completely solid. For example, the Dutch talent Anish Giri finished with fourteen draws! Svidler had one win and a loss and Aronian had two each. But Vishy had seven decisive games – four wins and three loses! In a tournament that had 16 decisive games out of 56, Anand contributed nearly 45% of the non-drawn games.

And the analysis of his victories and defeats reveals a clear pattern. All the games Anand won were with the white pieces and all the ones that he lost were with the black! Something had really gone wrong with his black repertoire. If he could have limited the damage in that area, then there were excellent chances that he could have won the event. But as Anand said at the start, “You cannot pick and choose!” 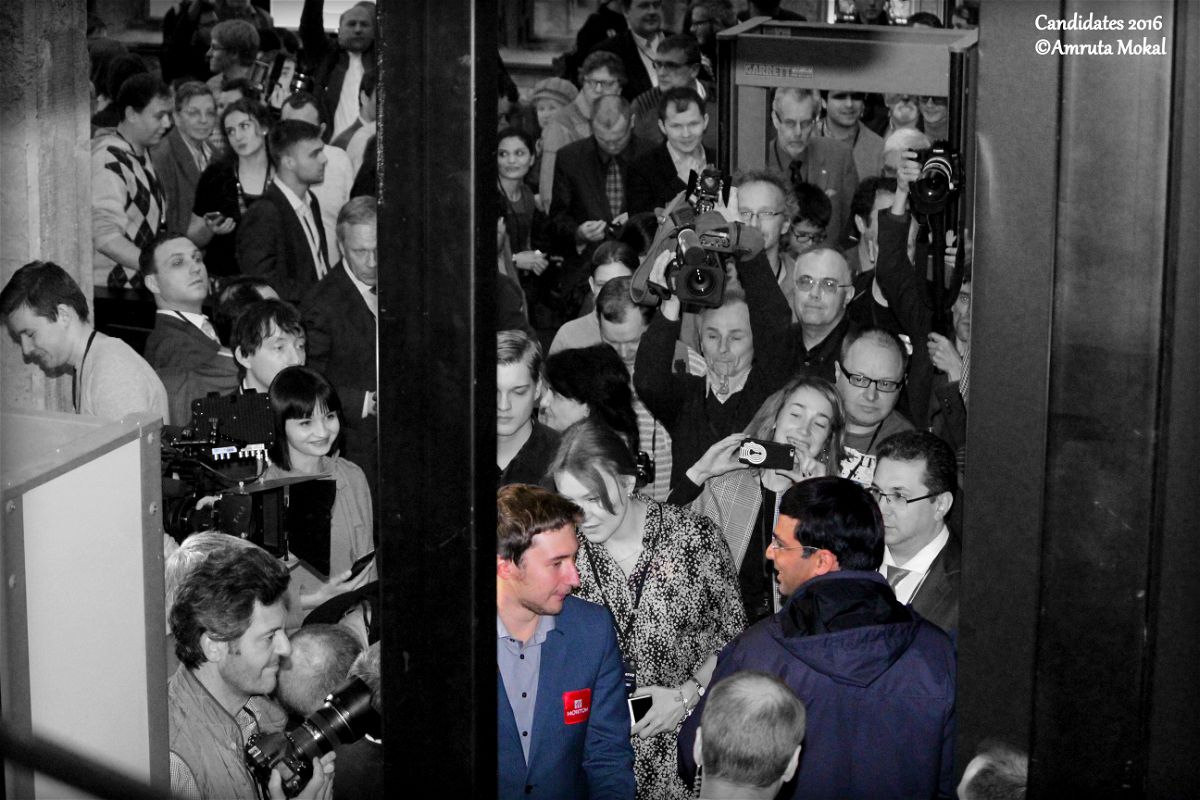 Passing on the baton? Anand congratulates Karjakin on winning the Candidates 2016

The tournament began on a high note for Anand as he won his first game against Veselin Topalov. In some ways this was the lucky break for the Indian champion as Topalov missed a relatively easy combination with 20…Bxf2+. This win was followed by solid draws against Aronian and Caruana in rounds two and three respectively. In the fourth round Sergey Karjakin played some sort of a positional masterpiece to get the better of the Indian Champion. 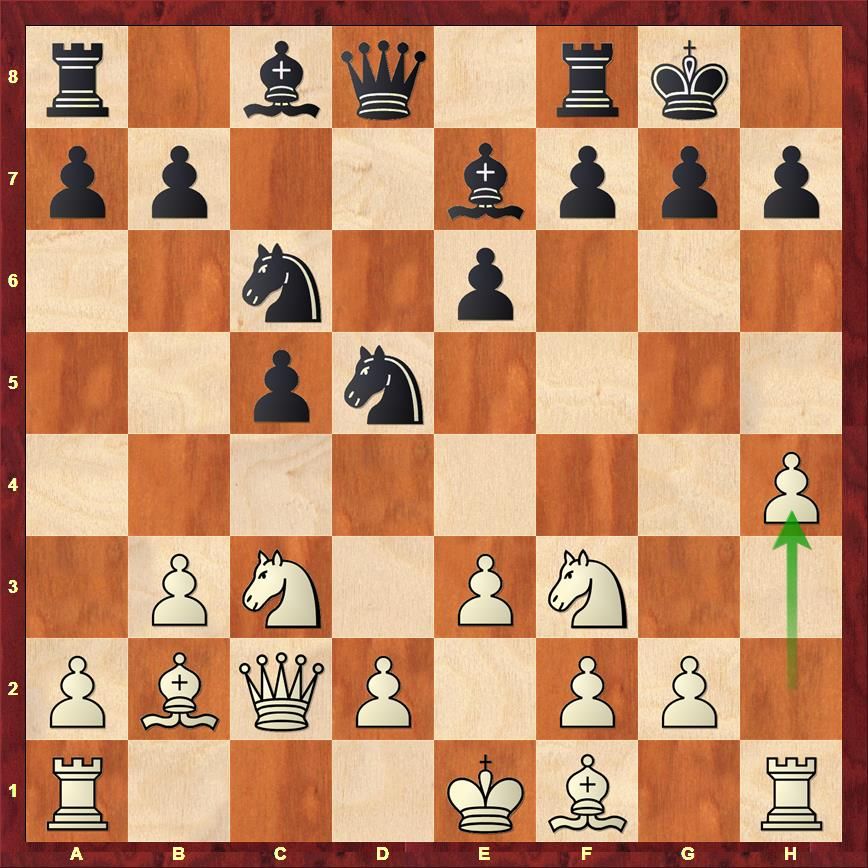 The move h4!? was an idea of Vladimir Potkin as Sergey Karjakin mentioned after the tournament

Of course, Vishy made some imperceptible errors but overall it was a smooth victory for the Russian. A loss to Sergey was followed by Anand not making great use of his white pieces. He made a quick draw with Hikaru Nakamura and was now on 2.5/5.

The sixth game turned out to be one of the most crucial moments of the tournament for Anand. Peter Svidler gave Anand a break from the Berlin and invited him to go into the main lines of the Ruy Lopez with 3…a6. This was just what Anand needed. In sublime attacking style he was able to mate Peter’s king in just 24 moves! 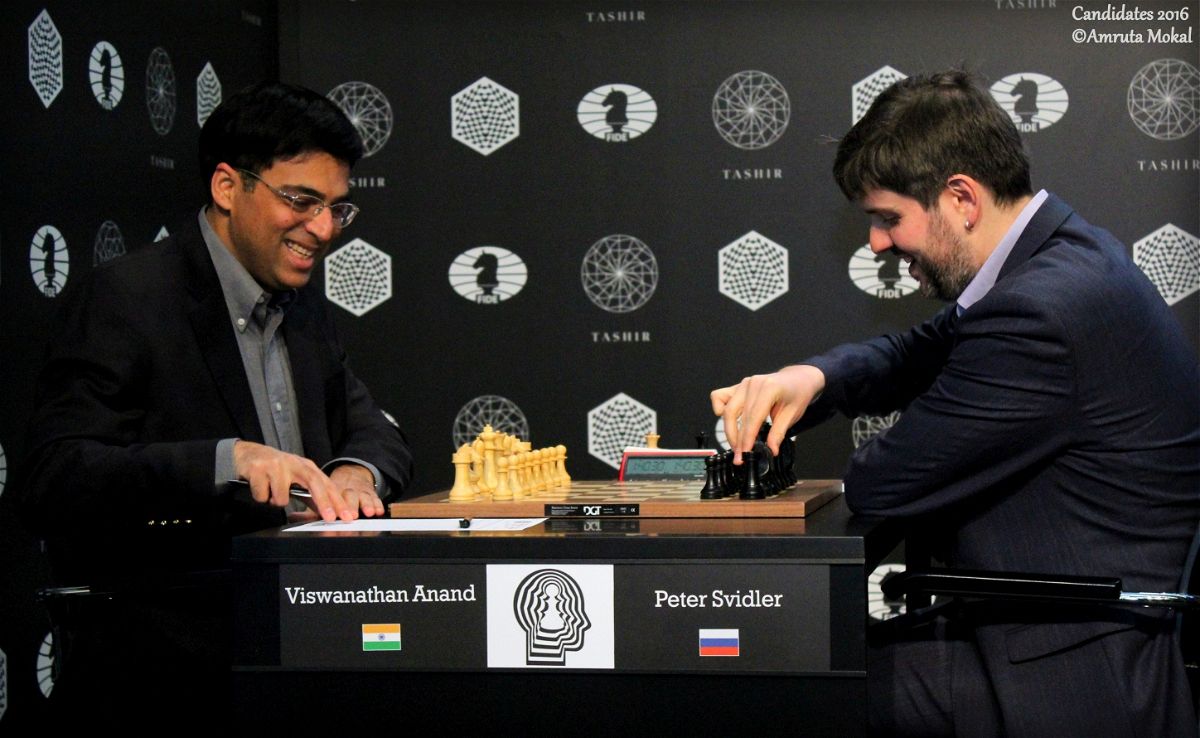 The momentum was back after this confidence-boosting victory!

The first half ended on +1 with a draw against Anish Giri with the black pieces. A draw against Topalov kicked off the second half. And then came the endgame against Aronian which would have made even the great endgame expert Akiba Rubinstein proud. In free flowing style Anand was able to win the game and with +2 he joined the leaders after nine rounds. 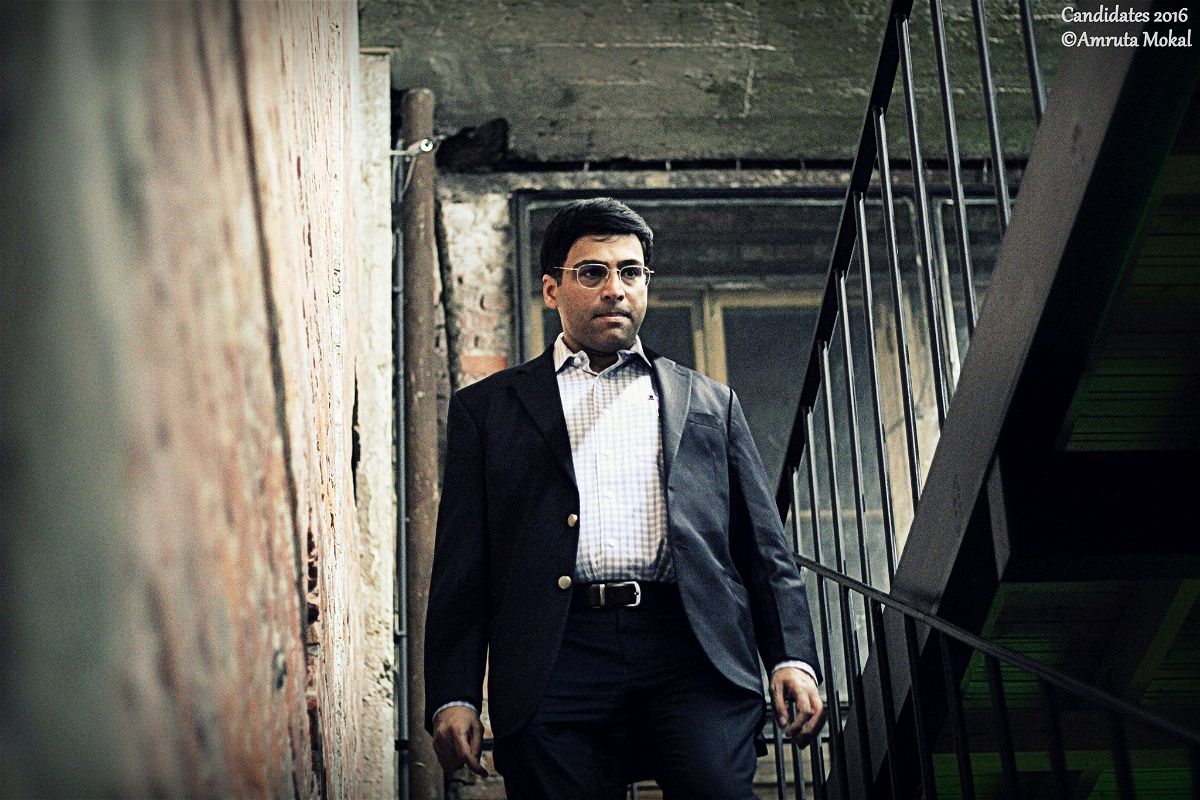 This particular photo of Anand by Amruta Mokal became quite famous on twitter with some of the people saying that it looked like a still from a Bollywood movie!

A shock defeat to Fabiano Caruana in the tenth round was a huge blow to Anand’s chances, but as if nothing had happened, he came back the next day and played his best game of the tournament against Sergey Karjakin. 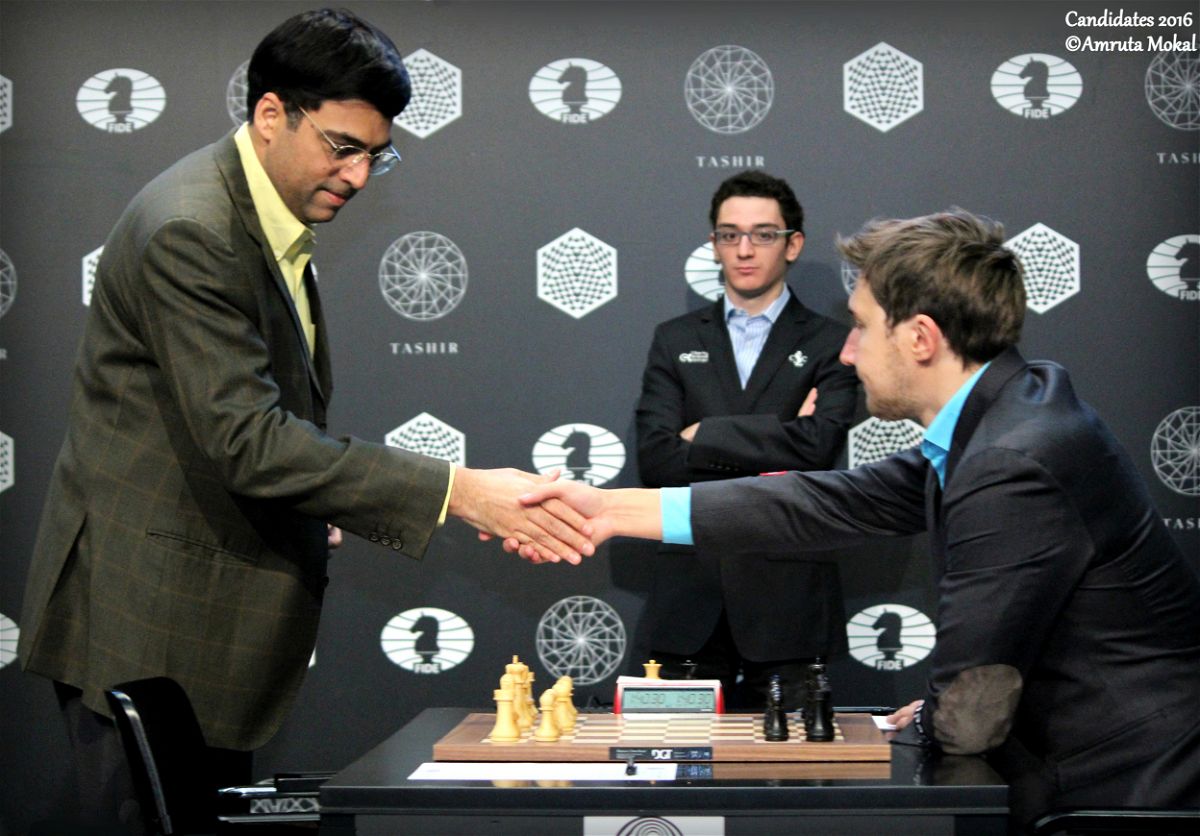 Sergey Karjakin, the winner of the tournament, lost only one game at the event and that was against Vishy Anand!

“When I started out, even I didn’t have any faith that I could win this ending!” was the way in which Anand described his technical brilliance against Karjakin. Vishy truly drew water out of stone and in an ending where it looked like he had no chances, Anand was systematically able to increase the pressure and win the game. Just when everyone had written him off, he was back again. I think this game really defined Anand’s fighting spirit at this event. To come back right on the next day, and beat not only the leader, but the guy who went on to win the tournament, was surely no mean feat.

At 6.5/11, hopes of the Indian fans were as high as ever! Anand had not only won against Karjakin but had also shot back into the lead with Caruana. But his loss against Nakamura in the twelfth round was really first nail in the coffin and then the draw against Anish Giri effectively ended his chances for the gold. A quick draw against Svidler in the last round ended his tournament with 7.5/14 and third place.

The thing which makes Anand’s tournament special is the fact that in a field of players half his age he could keep his chances for the first place right until the very end! Everytime he was beaten, he got back on his feet and kept fighting. That is why he is a gem and that is exactly why he is the greatest chess player India has ever produced! Having the expectations of the entire nation on your shoulders and performing is never easy

A small chat with Anand at the end of the tournament 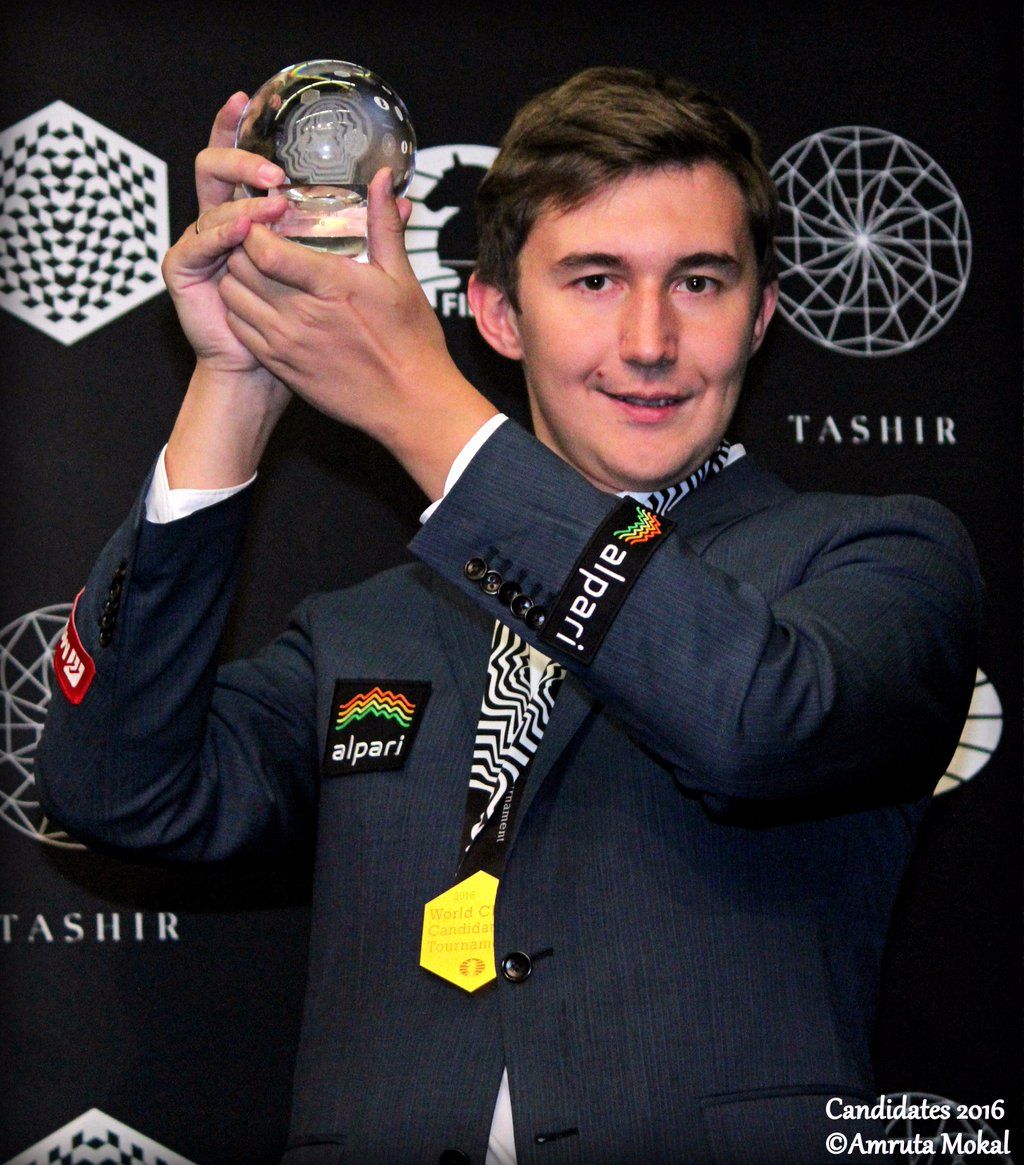 Congratulations to Sergey Karjakin who won the tournament. He will fight it out against Magnus Carlsen in a 12-game match in New York in November 2016 for the title of the World Champion. FIDE President Kirsan Ilyumzhinov has hinted that the match could take place in the Trump Towers! A heartbreak for Fabiano Caruana who lost the final game to Sergey Karjakin. Bobby Fischer remains the last American who played for the World title in 1972. (Note: one of our readers Sundararajan Ganesan corrected us - Bobby Fischer wasn't the last American to have played for the World title, it was Gata Kamsky, when he took on Karpov in 1996. At that time however the chess world was divided between PCA and FIDE with Kasparov being the PCA World Champion and Karpov being FIDE's.) Magnus Carlsen versus Sergey Karjakin would be an interesting World Championship Match, but as of now the Norwegian definitely looks like the favourite.