The American Chess Magazine is here!

As fellow chess fans, we always welcome a new chess magazine in which to indulge in our passion, but rarely does one appear with the amount of Wow factor that can be seen in the new American Chess Magazine. The large, beautifully produced magazine not only brings a slew of articles on events with deeply commented games but comes also with columns by names such as Baadur Jobava and Vassily Ivanchuk. Although the first edition celebrates the historic US win at the Olympiad, there is also a report on India by Pentala Harikrishna.

The American Chess Magazine is here!

The World Championship brings together fans and aficionados around the globe to follow the ultimate showdown for the ultimate title. It is therefore no surprise that many companies and startups choose to time the release of new products with it to try to get the best jumpstart possible. One of those new releases is a magazine called the American Chess Magazine. Just by the name, one might envision some form of rival publication of the American classic, Chess Life, especially with the large photo of the US Team and the headline, “US Golden Dream Team”, but even a casual perusal will show it is so much more. 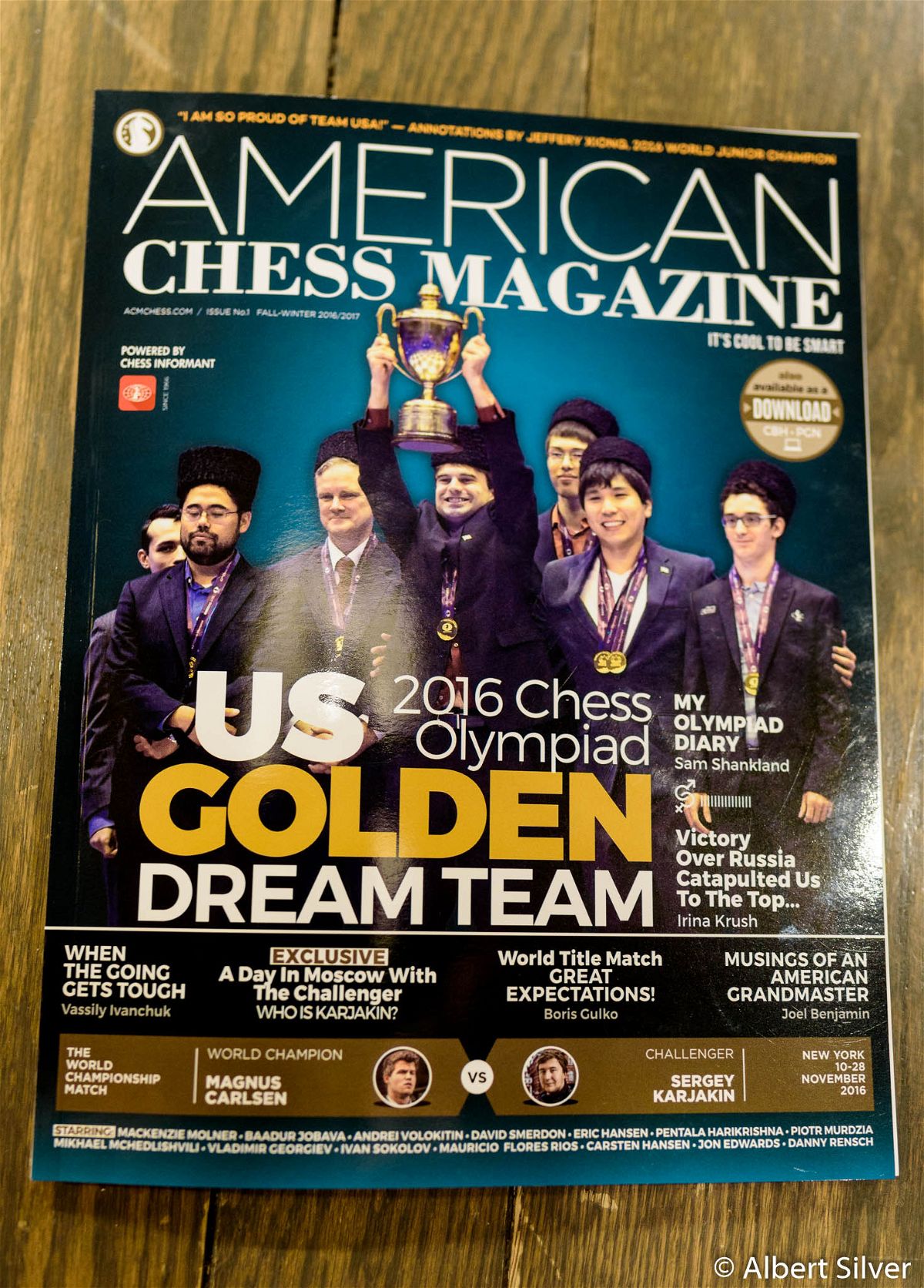 One distinct icon and label on the cover “Powered by Chess Informant” is already a bit of a surprise.

The Chess Informant is justifiably one of the legends in the chess publishing landscape, but large colorful periodicals are hardly what they are known for. In fact, considering what the Chess Informant was famous for, and its history, it is a bit of a miracle it survived the age of digitalization.

First published in 1966, and now celebrating 50 years of existence (kudos!) Chess Informant was always a rather unique publication. For a long time, it would come out twice a year as a sort of large hefty paperback, in a monocolor cover, a color that changed regularly, a simple symbol, and hundreds upon hundreds of deeply annotated games in a languageless system of codes. In the first pages was a breakdown of what all these codes meant, and to this day they are the standard every single magazine and program uses. That includes ChessBase needless to say, and is a testimony to their ingenuity and nearly universal acceptance as the norm. 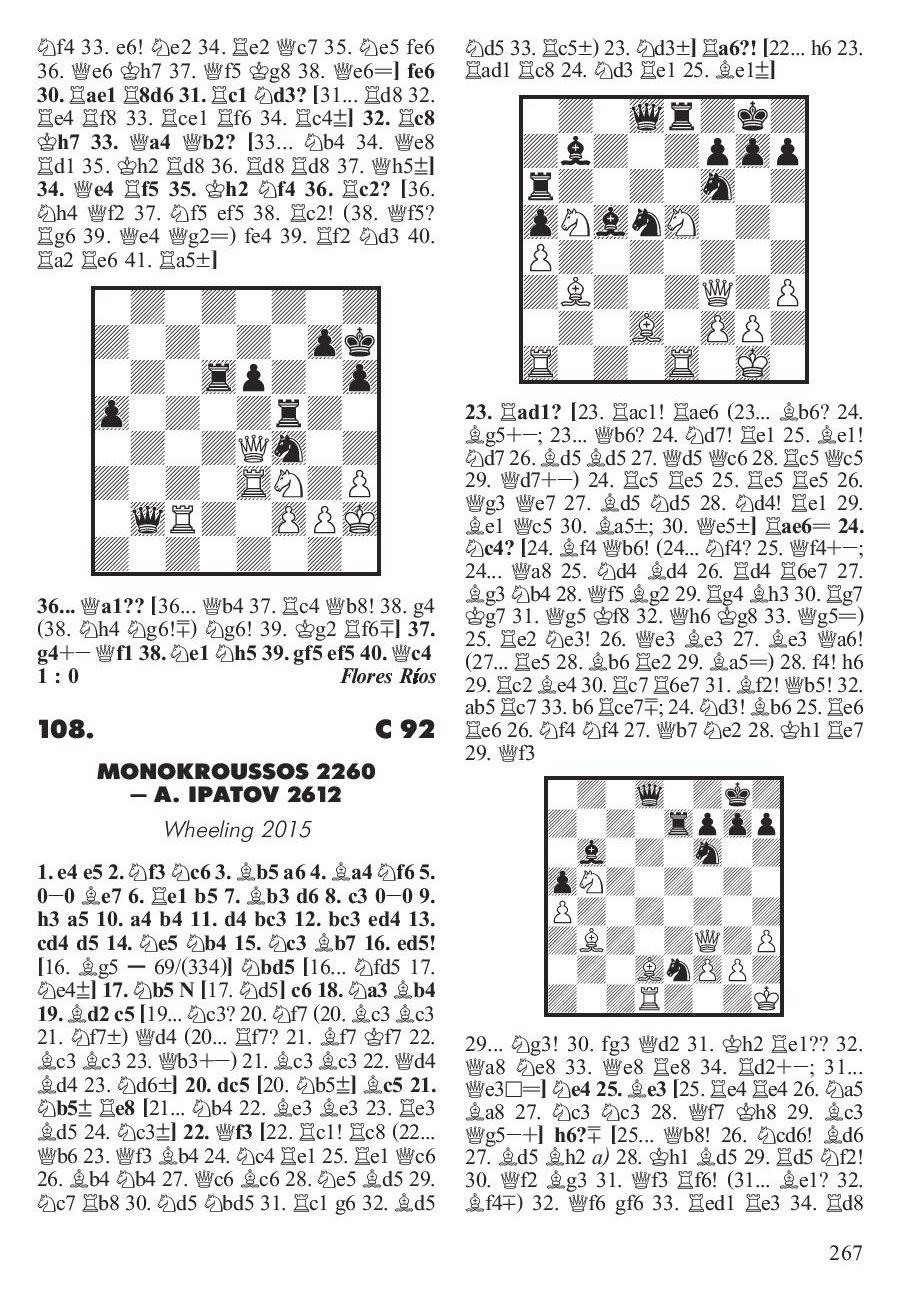 While the Chess Informant was the absolute standard when it came to reams of deeply annotated games, signed more often than not by the players themselves, such as Bobby Fischer, Anatoly Karpov, Garry Kasparov, and so many more, it was also at a time when the databases we enjoy today did not exist. In fact, for the longest time, claiming a complete collection of Chess Informants was the chess equivalent of owning the Encyclopedia Britannica. Research of an opening or player would yield something in one of those massive volumes.  Nowadays, with deeply annotated databases such as Mega Database, one would not have been surprised to hear they could no longer persist, yet survive they did, and thrive, though not without some serious changes. These changes, as we will see, were instrumental in the birth of the American Chess Magazine. 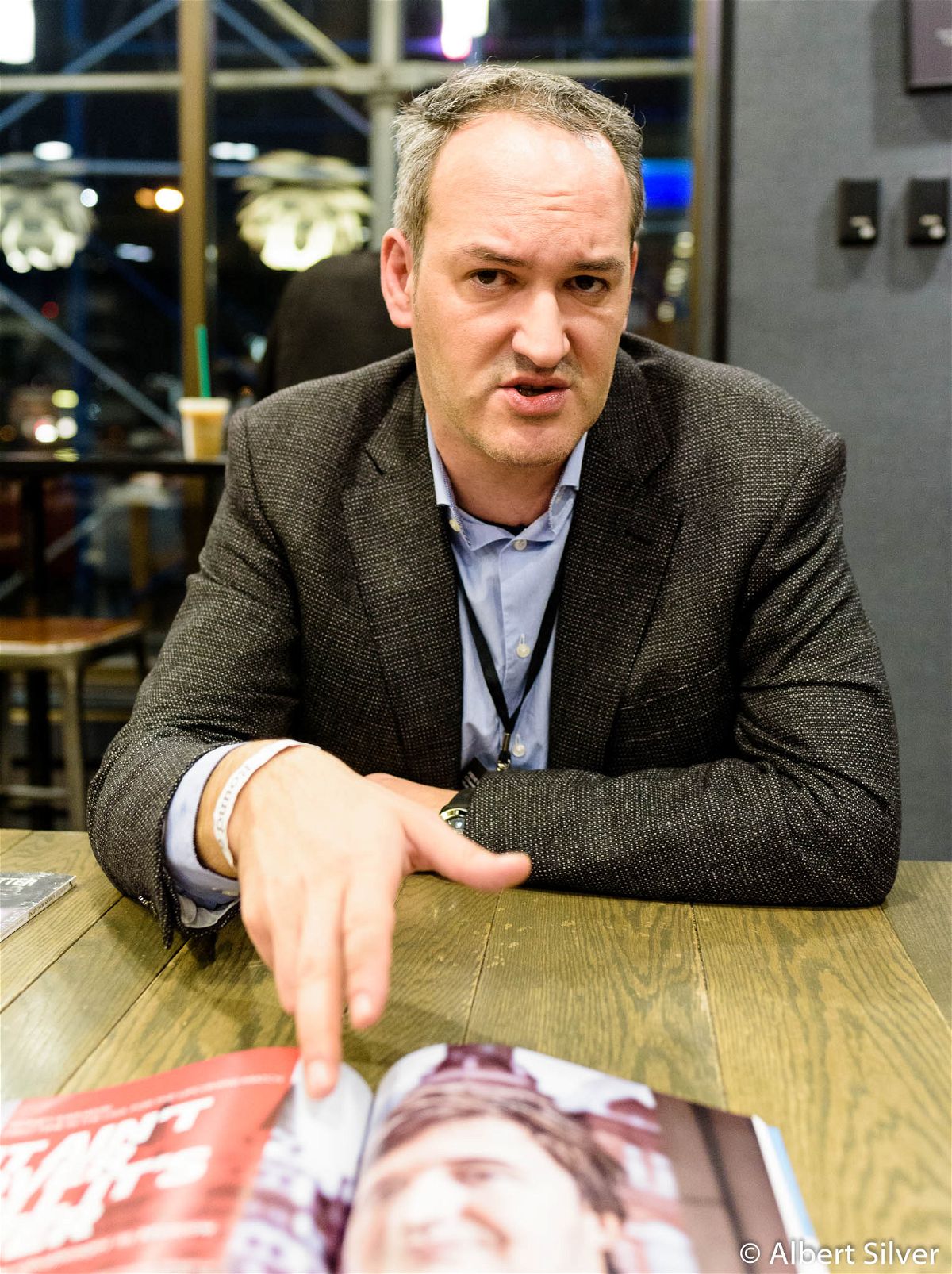 Meeting at a local coffee house, Editor-in-Chief Josip Asik is very enthusiastic as he explains the challenges that allowed the Chess Informant to navigate the choppy waters of the new era, one that sank greater print names than it, and even give rise to a new chapter in its history.

One of the first things was the change from its nearly anonymous face with the lifeless single color it appeared in into a vivid image with provocative titles. While important, it would take more than a fancy new cover to overcome the challenges it faced. 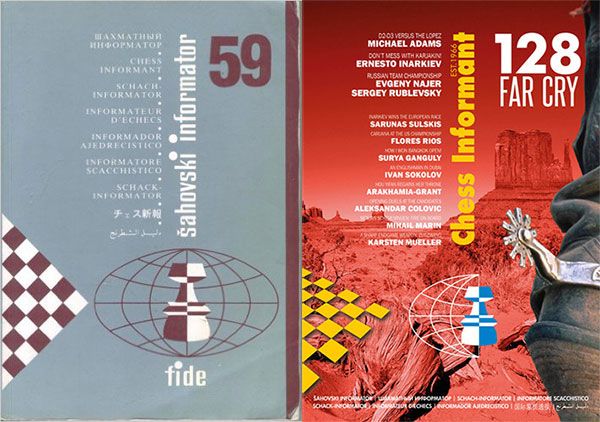 Example of traditional old cover, in which the basic color would change, but that was it, and one of the latest editions.

The key change was in reformulating some of its content, while respecting and adhering its core values, which readers and subscribers still expected to find. The split was made so that while the second half of the now quarterly book would still bring the cherished hundreds of commented games in its traditional system of annotation, the first half was now made up of lengthy columns and articles signed by a variety of authors. It was a serious risk of course, but the alternative was to sink into oblivion.

The formula has been implemented for some time now, and its success led to the next idea, to create a full-blown print magazine focused entirely on high-quality content, covering a wide range of topics. The name of the magazine most certainly makes clear a certain proposed bias in its content, and while one will find much that follows this, there is also so much material within that is genuinely international, the appeal promises to be very wide indeed.

The main tale of the day may be the US victory at the Baku Olympiad, with notable articles and accounts such as “My Olympiad Diary” by GM Sam Shankland, or Irina Krush’s in-depth account with commented games, spanning eight pages, but it is not all about Pax Americana. There is also an overview of Canada’s result by GM Eric Hansen, some great analysis by Australian GM David Smerdon of his near-victory over Magnus Carlsen, a contribution by Ukraine’s top-scorer Andrei Volokitin, and finally India’s Pentala Harikrishna shares impressions and looks at his win over Shakhriyar Mamedyarov.

Aside from reports, however good, one will find three different previews of the World Championship: one by GM Boris Gulko, another by GM Mauricio Flores Rios, and finally a visit with Sergey Karjakin in Moscow. That said, one of the things that really stood out was the names of some of the columns and columnists. 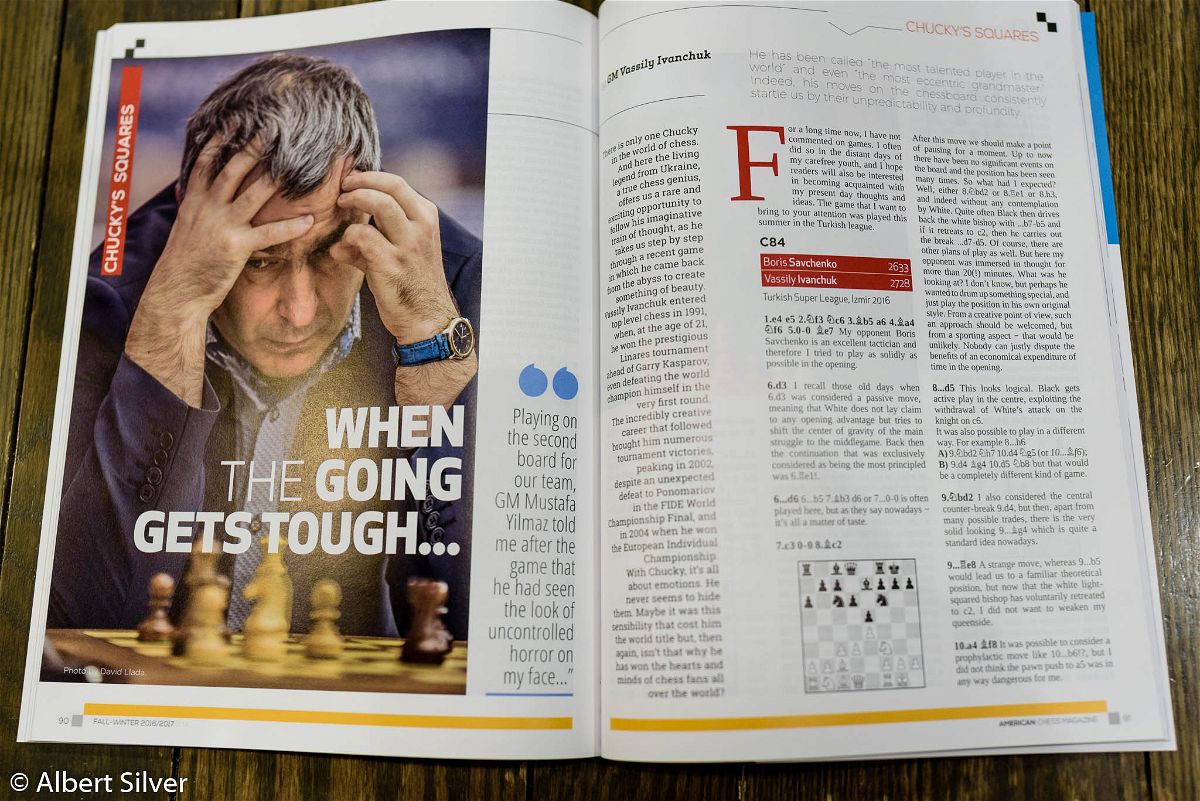 Chucky’s Squares?? It is a struggle to recall the last time the brilliant Ukrainian Vassily Ivanchuk actually annotated a game, much less wrote an entire article, yet here he is choosing a game and is giving his unreserved opinions, insights and annotations. 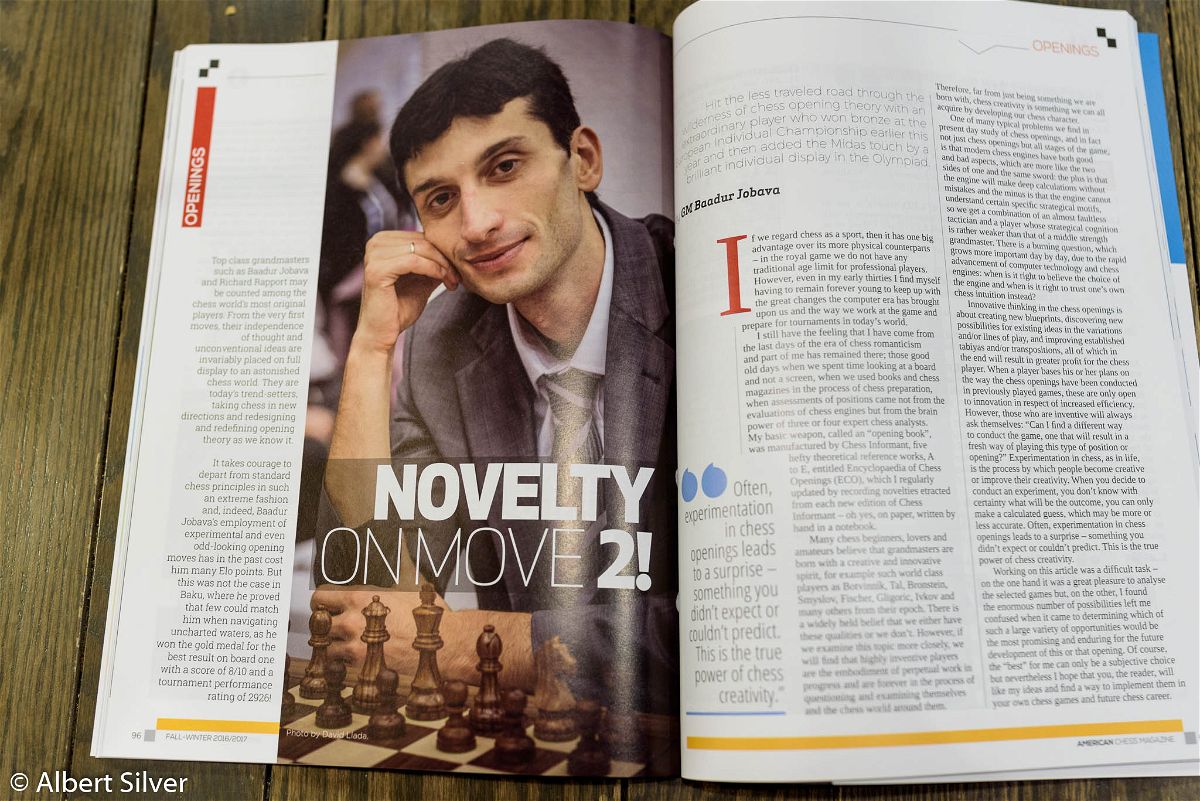 Georgian GM Baadur Jobava is without question one of the most creative players around, with no inhibitions whatsoever in his opening play. One can only imagine the fascinating things he will share in his Openings article entitled “Novelty on Move 2” 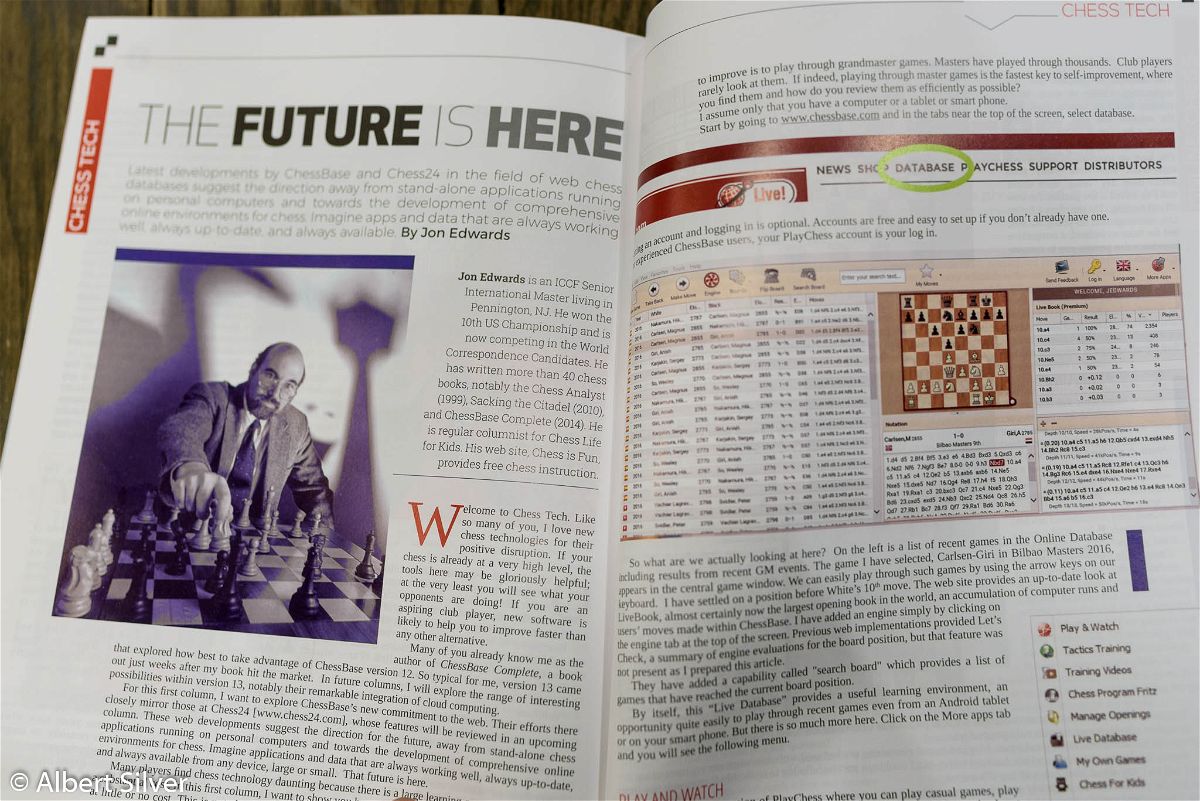 Last but not least is a column by Jon Edwards, called Chess Tech..

Jon Edwards, who is an ICCF Senior Master, is also the author of ChessBase Complete, and is an expert user of software, a necessity for his correspondence play. In his article “The Future is Here” he introduces readers to the wonders of ChessBase Account, while promising to teach the intricacies of ChessBase 13/14 in future columns and “notably their remarkable integration of cloud computing”. 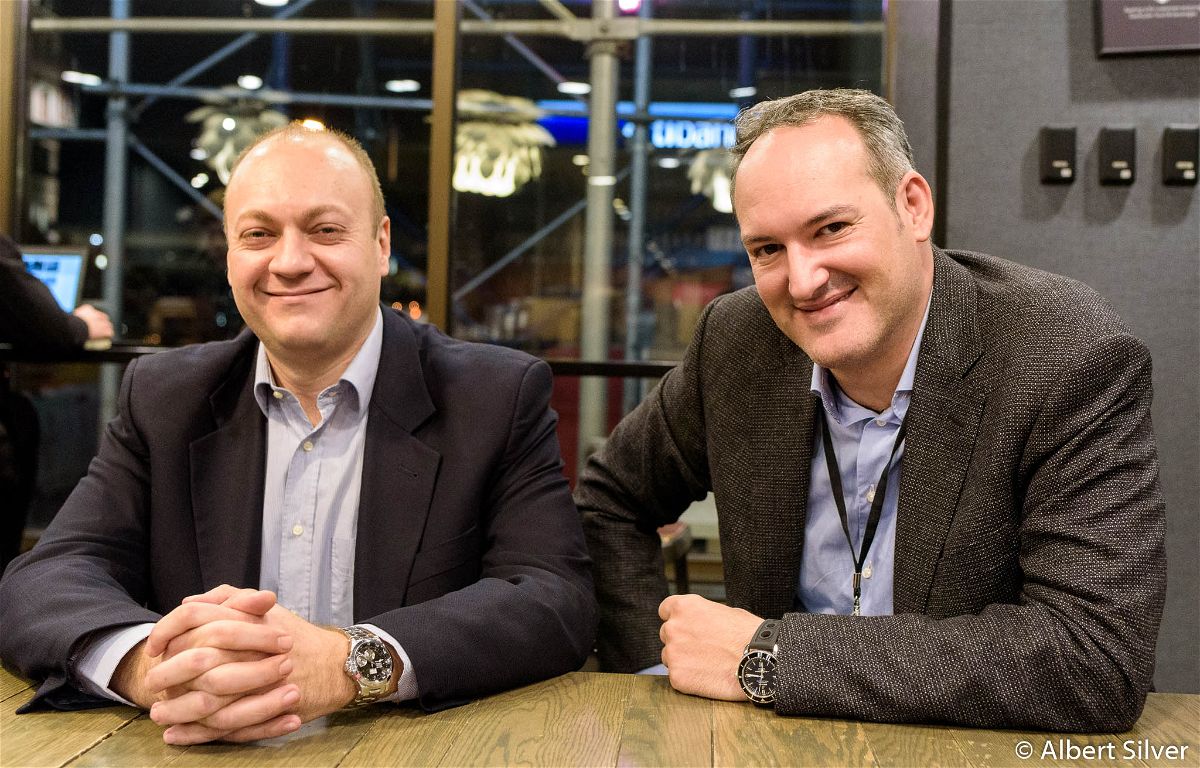 All in all, it is clear that this is a very impressive debut, and while only time will tell how well it fares, the sheer quality of content should attract chess aficionados all over. Coming out at four issues a year, each is 150 pages and costs $29.95 (Rs. 2060/-) or $99.95 (Rs. 6876) for a year’s subscription. For more information see the official site at www.acmchess.com.

If you are a die-hard chess fan and want to enjoy some peaceful time with a coffee and fantastic chess images, analysis and stories by these top grandmasters, you must go ahead and get the American Chess Magazine!

ChessBase editor Albert Silver is in New York. He personally reviewed the American Chess Magazine for the ChessBase India readers.