Chess by the beach at Kozhikode, 6 way tie for the title!

ChessBase India's Nitin Pai took part at the 11th ACA rating tournament that was held at Calicut. After playing his games, enjoying the beach and relishing wonderful Kerela food, he sent us a beautiful illustrated report. Through this article you not only get to know what transpired at the event, but also get some knowledge about the future stars of Indian chess. You get know about the organizers, arbiters and support team and how each one is trying their best to popularize the game of chess in India. 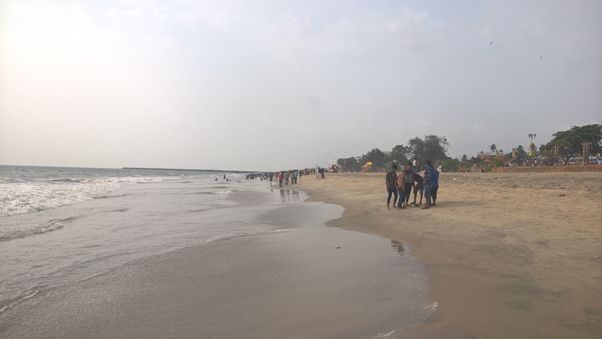 The 11th ACA All India Open FIDE rated tournament was held at Calicut, from 8-11th April, at Gujrathi School, right opposite to Kozhikode city beach. 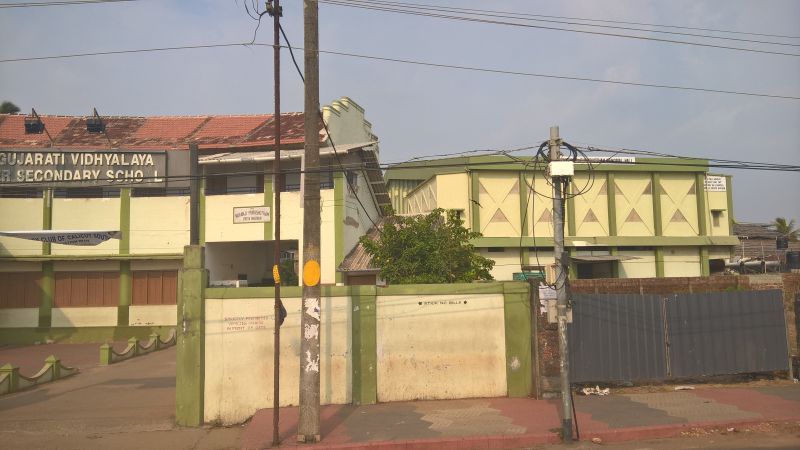 The venue of the tournament 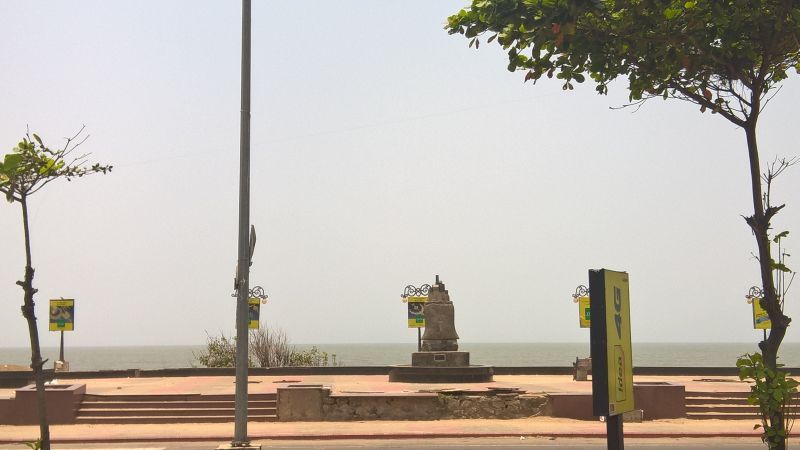 The view from the entrance to the school.

Calicut city has had a rich chess culture, having served as the centre for Kerala and Indian Chess. It has hosted players like Viswanathan Anand, Harikrishna and Humpy in national juniors and several international stars in World Junior Championships in 1993 and 1998.

The event attracted 300 players, including 2 IMs and few FMs. 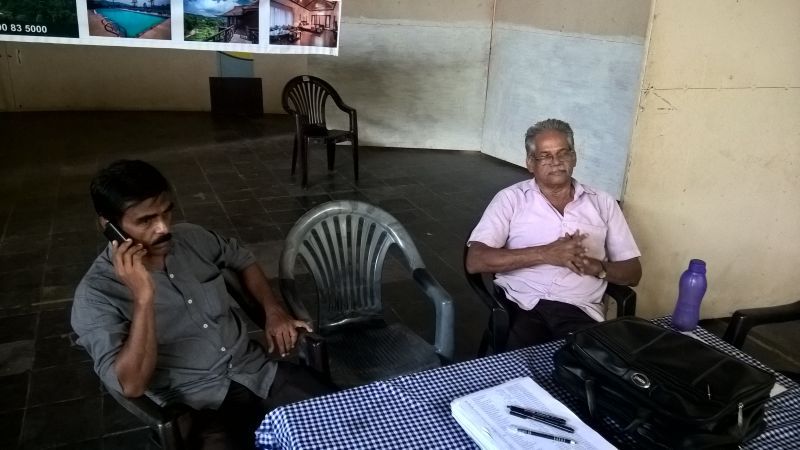 Mr. Venugopalan (right), who runs the Anand Chess Academy, was the organiser of the event. A stalwart of Indian chess with over 30 years of experience, having played the roles of player in BSNL, arbiter in World Juniors, organiser and also as office bearer of AICF and CAK. Also in the picture is senior player Anilkumar OT, who was part of organising committee, but at the same time could not keep himself from having a shot at the title. 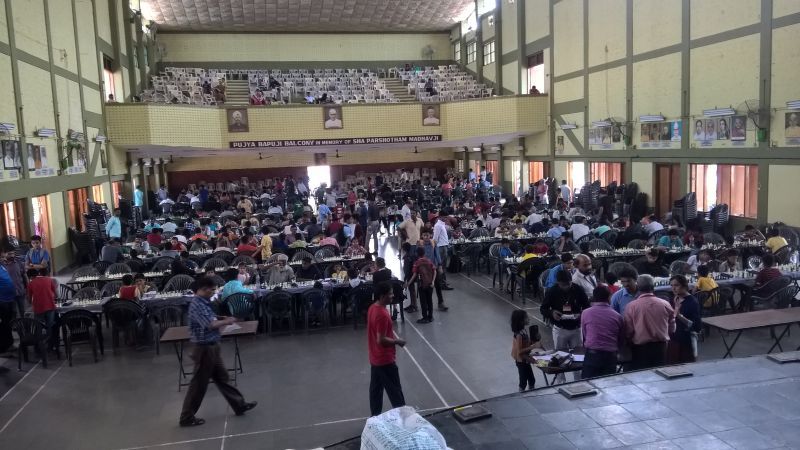 A very spacious tournament hall. I had played about ten tournaments at Kozhikode prior to this one, but this was by far the best venue, both in terms of location and playing conditions and I am sure many others would agree with me. If one lost the afternoon round, he/she could go to the beach to overcome the loss and winners would go to the same place to celebrate their victory. I got to experience both. We request Venuji to conduct many more events at this venue in future.

The first round witnessed few upsets, the major one being the loss of 12th seeded Eugene M.M, rated 2019. 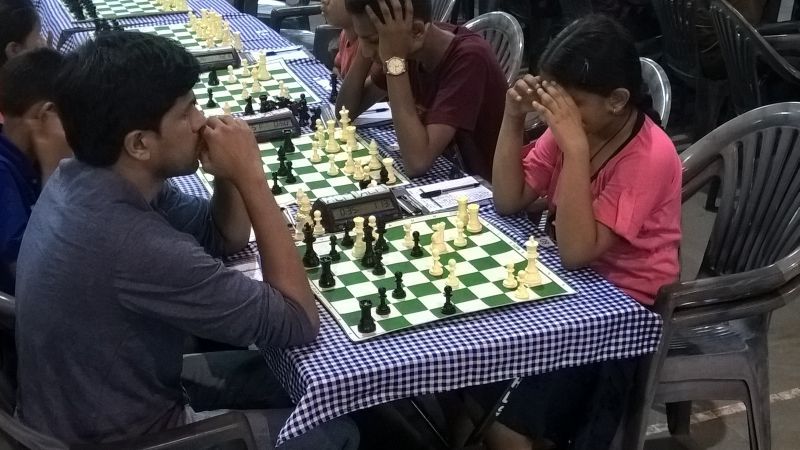 Eugene (left), was playing after a long hiatus. Above, he is playing against 11-year-old Swara Lakshmi, rated 1083, in round two. After a lot of struggle in the opening and later in the middle game, Eugene managed to go to a rook endgame and outwit Swara. Eugene came out of the tournament with a 1378 performance and losing 94 elo. Shows what the rating system has come to in the last 5-10 years. His first round nemesis was….. 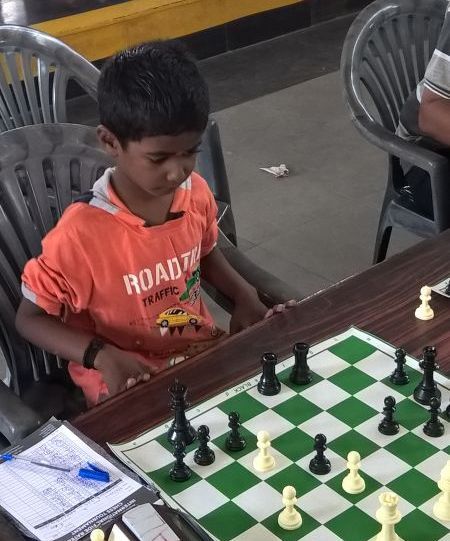 Aakash played some great chess in this tournament and is gaining 54 elo. This boy finished 15th in last year’s national under 7, aged only 6, and now is the highest rated player in this category and is aiming the title in this year’s edition. The boy comes from a humble background and sometimes his parents find it difficult to fund his tournaments. His coach, Dhanashekar from Coimbatore, is doing whatever he can to help the boy reach his full potential, and requests patrons to come forward and help the boy. Looking at his games makes one wonder if Aakash could be to Ilamparthi what Praggu is to Nihal. Here is his 3rd round game in which he beat a player rated nearly 400 points higher, shows his tremendous understanding of the game.

Another one of Dhanashekar’s students,Harshad S impressed all by holding IM Kathmale Sameer, the 2nd seed, to draw in round 3. 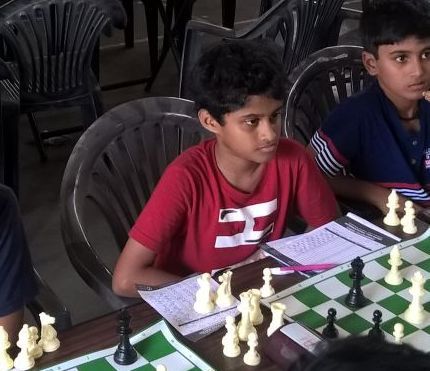 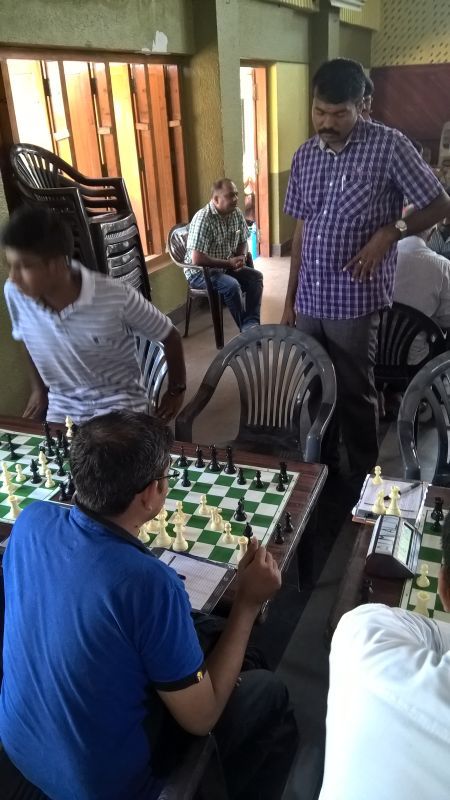 Participating in the event was Lakshminarayanan (standing), brother of a popular Indian IM. Any guesses? 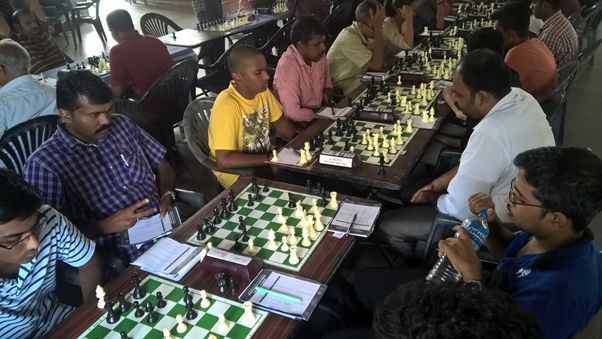 Does the position on the board give a hint?

However, despite winning the h2 pawn, Lakshmi was careless and went on to lose this game to Dr Avinash, a surgeon. Avinash was once a regular player in his school days in Mumbai, later took a long break for his MBBS and masters, and even now plays tournaments only during vacations. He still maintains a rating of well above 1600 and was on 4.0/4 in this tournament, but then went on to lose three consecutive rounds. His fourth round victim was… 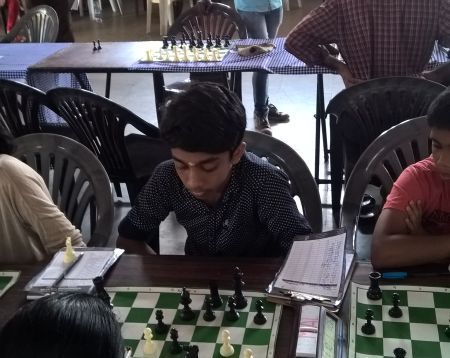 Abhishek was recently featured in CB India for winning an event at Kottayam. Abhishek is an extremely hardworking lad and is trained at Hamara Chess Academy, Calicut, by the Indian Tal himself. 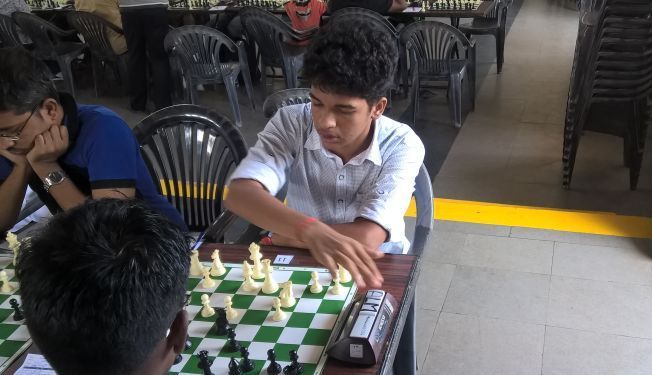 Marthandan KU, a very talented player from Kerala. We both went to the same academy from 2009-2011 as beginners. Back then he started with a meagre rating of 1200 and came to limelight winning the state U-9 title in 2010. Since then, he went on to win several state titles in various age categories, including the 2015 state Junior ahead of Nihal Sarin, in the process crossing the 2000 elo mark at some point. (having K-15 for a long time). He finished 7th here with 6.5 points, holding top seeded Kunal to a draw in round five. 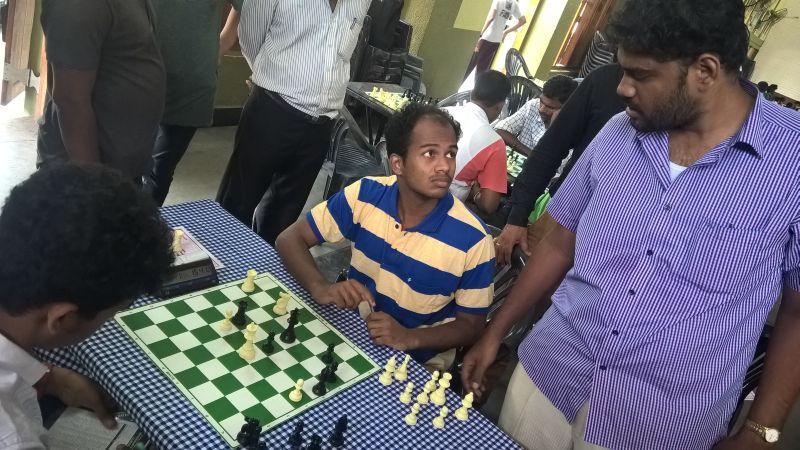 Did I miss a win? Asks Kunal to his state mate Ram S Krishnan. Kunal and Ram eventually drew their encounter in the last round to clinch 1st and 2nd places respectively on tie-break. 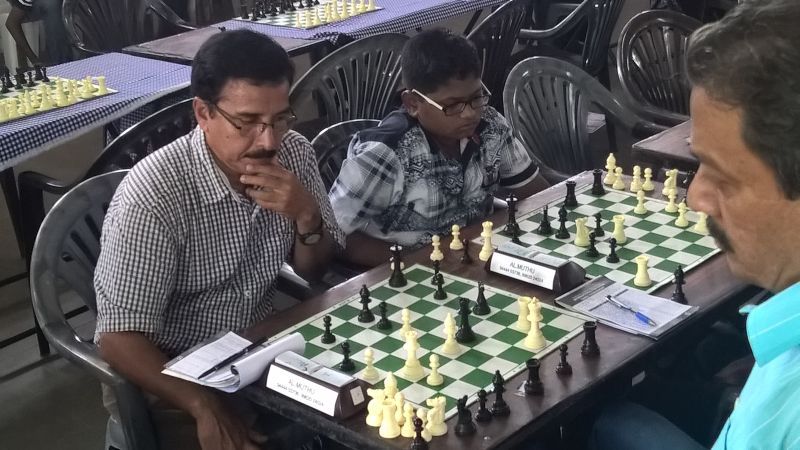 Senior Kerala player MB Muralidharan (hand on chin),once dreaded by GMs and IMs, was participating in this event. However, he is well past his prime and had a mediocre tournament. He now runs the MBM chess academy at Kochi and his tremendous knowledge and experience continues to be a huge asset to his students. Also in the frame with blue shirt is Veteran star, Abdul Majeed N, who once dominated Kerala state championships. Moving onto the future of Kerala chess, here are Jubin Jimmy (playing black) and Benjamin Varghese. This last round encounter ended in a draw. 11-year-old Jubin is showing great promise. Currently rated close to 1900, those who know him won’t be surprised if he crosses 2100 in a couple of months. 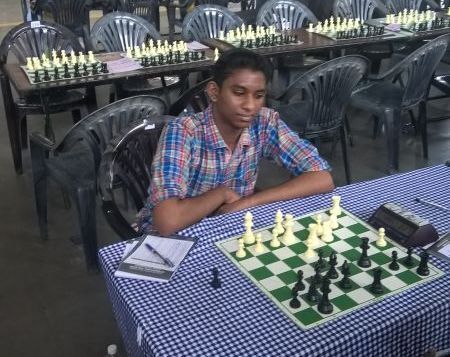 Nithin Babu, an extremely talented self-taught player, who never had the facility to avail chess coaching. He opened his rating in the 1400s but with sheer hard work has lifted it above 1900. He finished 14th here. 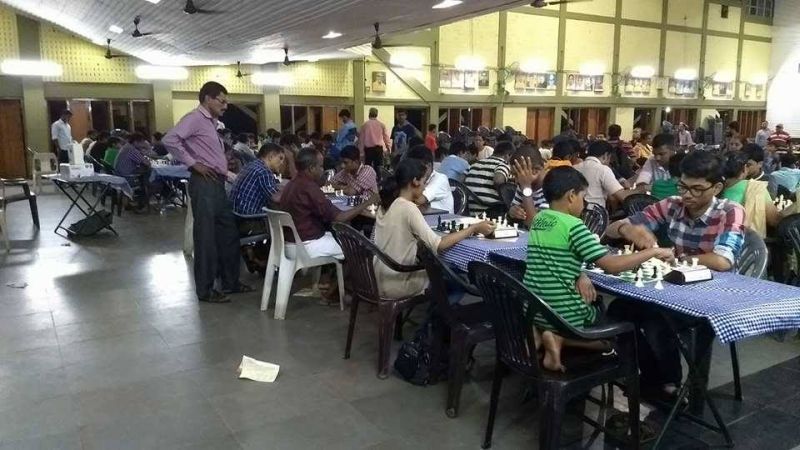 A blitz event was organised after round 4... 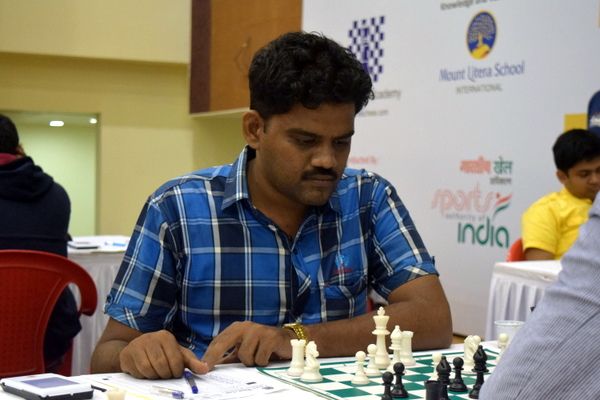 ...which was won by Ram S Krishnan. 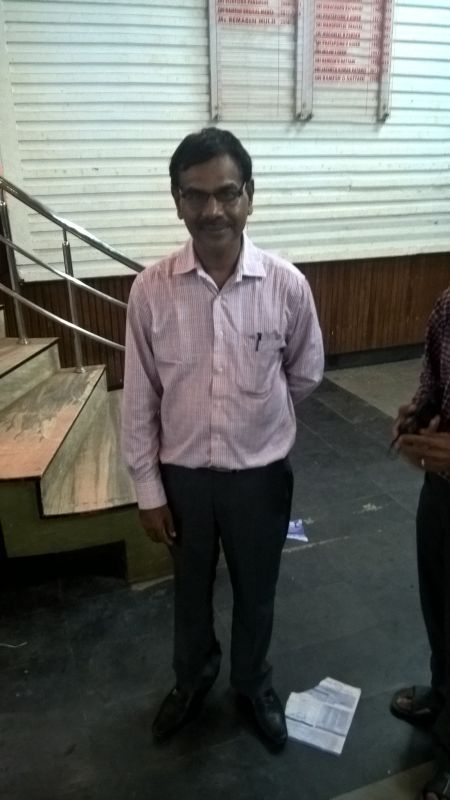 Ephrame from Kanyakumari was the chief arbiter for the event. He was kind enough to announce the amendments to the FIDE laws of chess, applicable from July 1st.

Another very good thing about the tournament was that the PD ceremony started at about 6 p.m. and was wrapped up before 6.30 p.m.! Definitely something other organisers can take note of. It was a six way tie for the title with 7.0/8 points and harsh tie break rules came into affect. 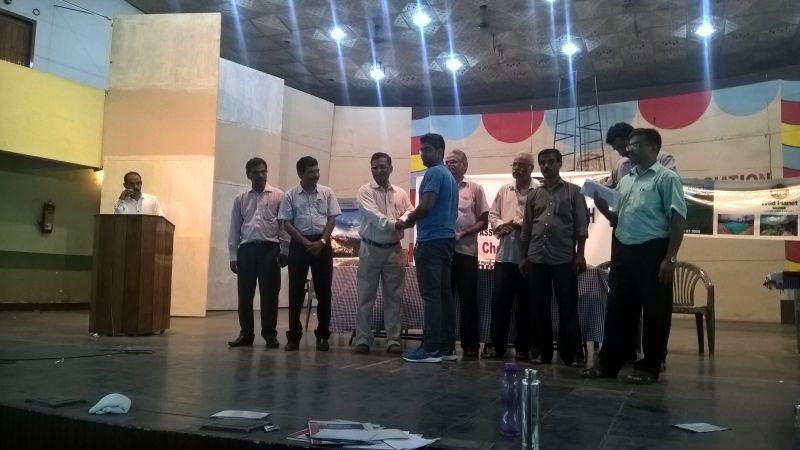 IM Kathmale Sameer had to be content with 6th place 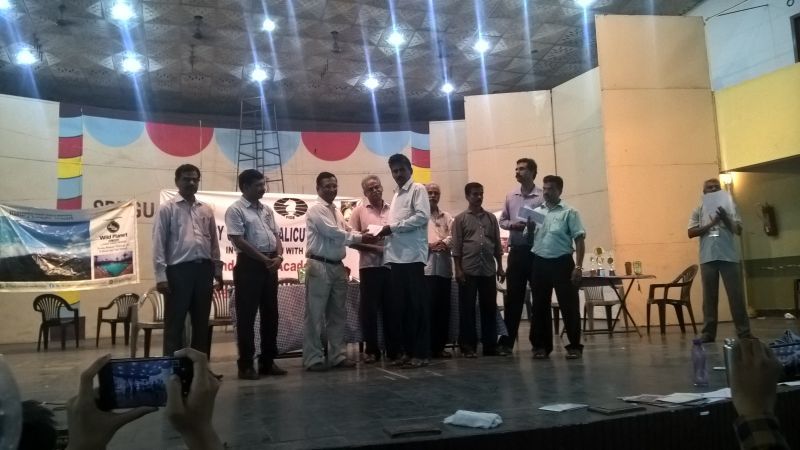 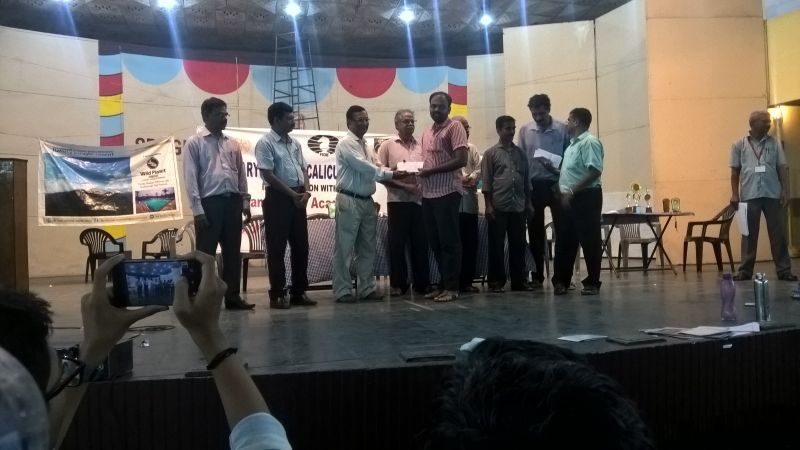 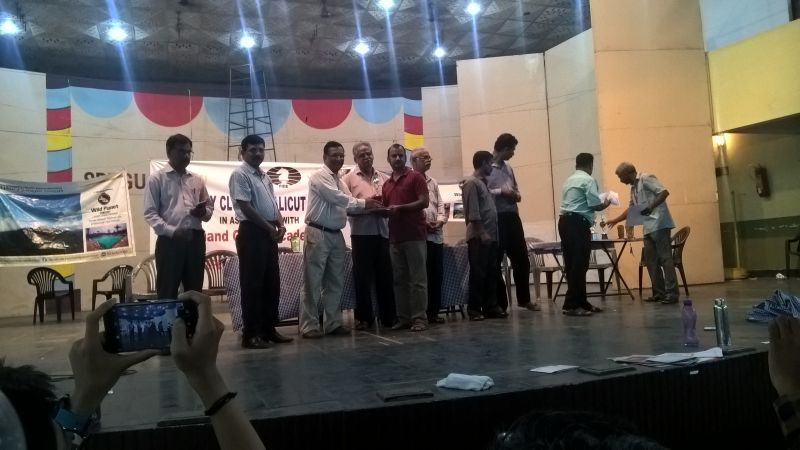 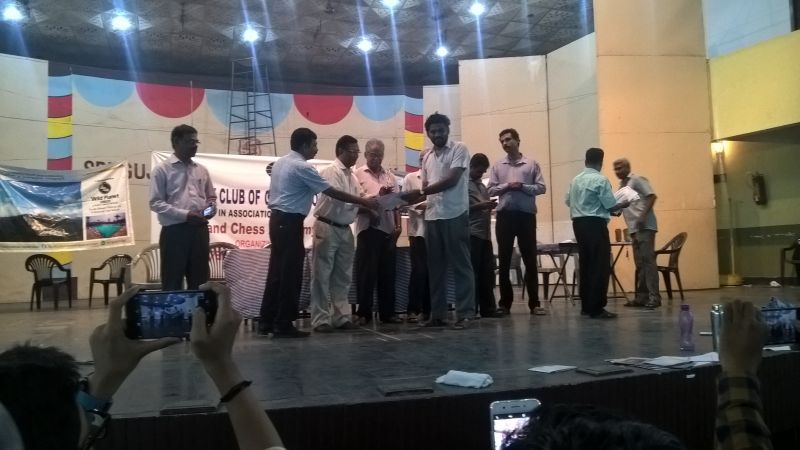 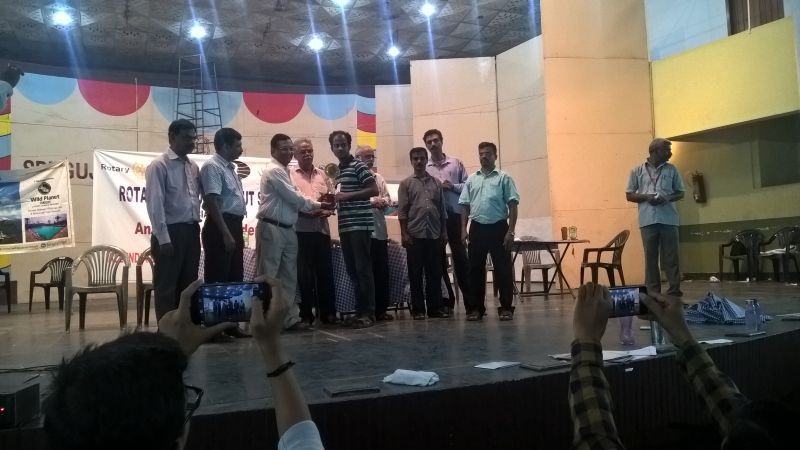 Calicut is a good tourist location and a food lover’s paradise, especially for non-vegetarians. 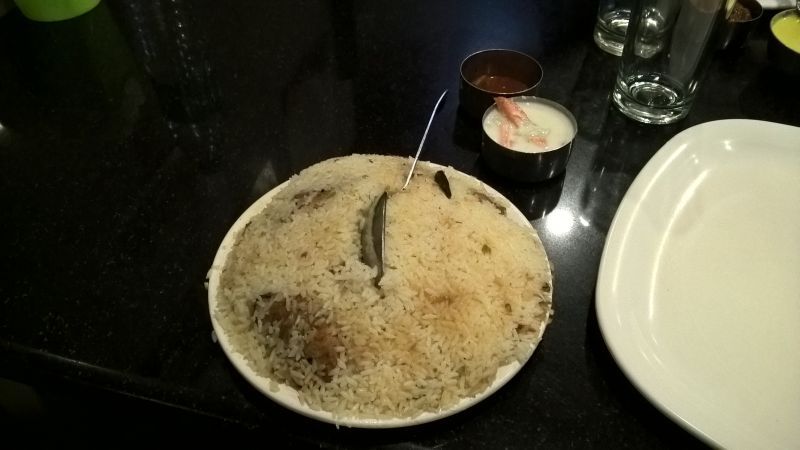 The famous biryani, comes in chicken, meat, seafood and veg.

The organisers invite one and all to their next below 1500 Elo tournament from 29th April-1st May. Those not eligible can play the open tournament at Calicut from 11-14th May, organised by Calicut Chess Academy.

Download prospectus for 29th April to 1st May tournament 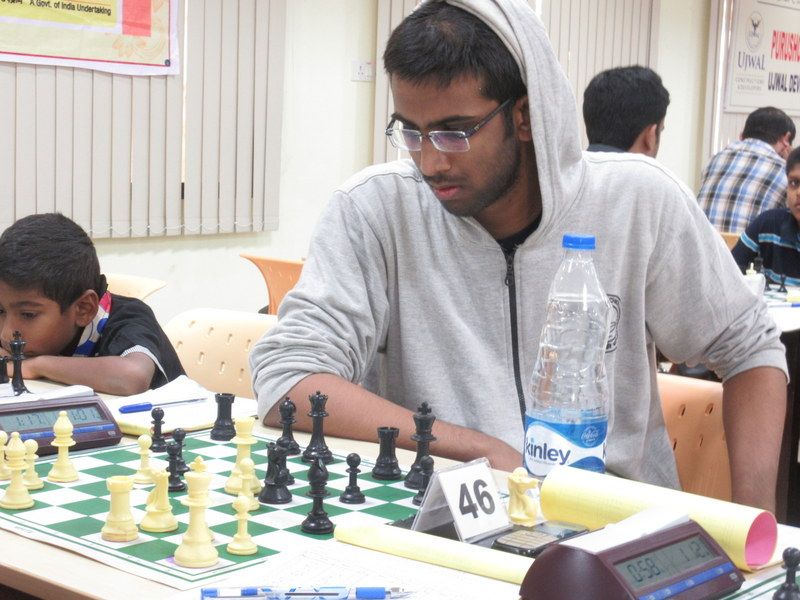 Nitin Pai is a twenty-year-old undergraduate student in Electrical Engineering at IIT-Madras. He is a passionate chessplayer with an eloquent voice and has contributed his feedback and photos for ChessBase in the past. When he is not studying or surfing the internet for crazy science stuff, or working on his projects, you may find him hunched over a chessboard, trying not to blunder. Oh, did we mention that he has a FIDE rating of 1601?