Your chess tutor with a double major in Economics and Statistics!

The biggest two problems that every beginner faces in a game of chess are - starting out right and not blundering pieces! Openings and Tactics are truly the two most essential cornerstones of becoming better at chess. And there is no one better than WGM Qiyu Zhou to be your trainer! Qiyu is not just a WGM and a former World under-14 champion, she is also doing her double major in Economics and Statistics, with a minor in Mathematics from the University of Toronto. Zhou is an intelligent and charming presenter and if you are a beginner then these two DVDs are just what you need to improve at chess!

ChessBase has had several interesting authors in the last few years who have recorded DVDs. They include top players like Fabiano Caruana, Rustam Kasimdzhanov, Erwin l'Ami among many others. While all of them are well-known personalities in the world of chess, the most recent author who recorded two DVDs at the ChessBase studio is in a class of her own! She is a WGM, a former world youth champion, she is doing a double major in Economics and Statistics with a minor in Mathematics, she is involved in several philanthropic causes, writer for ChessBase and a chess streamer! Meet Qiyu Zhou, a multi-skilled personality, who has a Midas touch! She excels at just about everything she does! Recently she visited the ChessBase studio in Hamburg and recorded two DVDs on Fundamentals of Chess - Tactics and Openings. In this interview Qiyu Zhou tells us more about these products, what inspired her to do this project and also reveals the secret of how she is able to manage so many things at the same time!

Openings and Tactics are two most important things for beginners

Sagar Shah (SS): Qiyu, how was your experience of visiting Hamburg and recording DVDs for ChessBase?

Qiyu Zhou (QZ): I really enjoyed visiting Hamburg and recording the DVDs for ChessBase. It was my first time in Hamburg, and I spent about two weeks recording and exploring the city. I had a lot of fun being a tourist, canoeing in the canals and visiting the beautiful downtown area. I even caught up with an old classmate and visited the carnival! Recording the DVDs itself was an amazing experience, and I found it extremely satisfying to go back to my place after each day of recording because I felt like I had done great work.

SS: How did you decide to record two DVDs?

QZ: I believe that openings and tactics are the two most important things for beginners to learn, which is why I wanted to make sure I covered them. To get a successful start in a chess game, one needs to be able to get out of the opening and know when and how to take one’s opponent’s pieces. I’m definitely hoping to also record DVDs on all the other important basic chess skills.

SS: What level of players would your lectures cater to?

QZ: My DVDs are catered for the beginner level. This DVDs cover the basic skills necessary for winning in chess, and I believe they’re a very good introduction for the more advanced ChessBase DVDs because they cover general material which is applicable to practically every game.

SS: The topics that you chose are so extensive and vast. Like covering almost all the openings and all the common tactical themes. Wasn't it too ambitious?

QZ: I think to make a good introduction for viewers to chess, it was necessary to cover as much material as I could in the two-week time frame I had while in Hamburg. The Fundamentals of Tactics DVD was mostly fully planned out by the time I was recording it, but I definitely kept adding material as I went along because there is always that one more theme of tactic that can happen in our games. I am extremely happy and proud with the final outcome and hope that everyone who uses the DVDs are able to improve their chess skill. 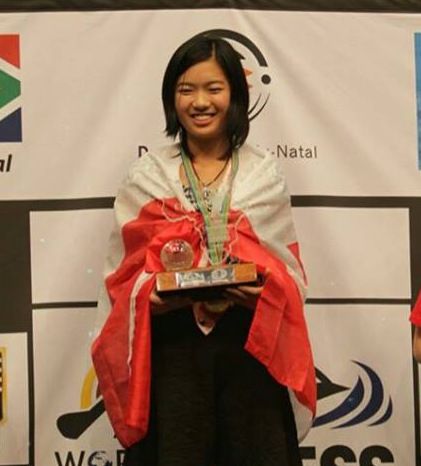 Qiyu Zhou after winning the World under-14 title

SS: What can the people expect to learn if they bought both the products?

QZ: I formatted the DVDs so that users can expect to learn the most important skills one needs for starting out in chess. Making the opening moves correctly and getting a decent middlegame is important since it’s very easy to get caught out in the opening. The most common mistake that many who start out is losing material. I always like to say that the person with the extra piece will win the game, which means therefore, learning tactics, and most importantly to be able to identify hanging pieces and how to protect your own hanging pieces as well as how to capture your opponents will win you the game.

(Editor: Qiyu shares with us one of her favourite opening lines in the DVD below with some analysis. It arises from the Chigorin variation in the Ruy Lopez):

SS: Seeing some of your articles on ChessBase we notice that you are interested in statistics as well and you harbour a scientific approach towards things. Tell us a bit about your education and what are you studying right now?

QZ: I am doing a double major in economics and statistics, with a minor in mathematics. Writing the articles for ChessBase definitely opened a new world for me, as it introduced me to statistics.

Qiyu backs her claims in the articles on ChessBase with thorough investigation and statistics! You can read all of her ChessBase articles here.

SS: You are brilliant in your education. You are a WGM and under-14 World Champion, you also are interested in social service and philanthropy. Tell us how do you manage to balance all of these?

QZ: After winning the U-14 World Championships, I prioritised high school over everything else. Of course, it was quite a challenge because I was still aiming for WGM at that time. But I believe now that I have accomplished everything I’ve set out to do in chess (keeping in mind I set the goal of becoming a world champion when I was 5) I’ve mostly put aside competitive play for now as I focus on completing my undergraduate degree. It’s very difficult to balance everything, while also having extra-curriculars, which is why I focus on a few things at a time and make clear what my priorities are. While I haven’t played competitive tournaments much in the last few years, I have started teaching and streaming chess.

Extreme focus at everything she does is the way in which Qiyu has achieved so much at this young age!

SS: What is your future aim? Will you pursue chess actively or some other career?

QZ: Currently, I want to become an investment banker and work in mergers and acquisition or take on a role of a quantitative analyst in finance. However, choosing a career is less simple than stating what I wish to do, and I am very open to everything.

SS: In these troubled times of Corona virus, what is your advice to all the budding chess players out there?

QZ: I believe that it is very difficult to stay focused during these times, but if you’re able to study, study with all your heart because these might be one of those rarer periods in which you may have some extra time to study. However, I want to say that if one doesn’t recognize immediate progress there is no need to be disappointed. Living during these troubled times is difficult, and chess is also a difficult game.

"Living during these troubled times is difficult, and chess is also a difficult game."

If you would like to get better at chess openings and tactics, we believe Qiyu Zhou's products on chess tactics and openings on ChessBase India are excellent starting points. You can get them individually for Rs.999 + GST or you can buy them both together in a combo and save Rs.200.

Contents of the Opening DVD:

A sample of the Opening video

Contents of the Tactics DVD

A sample of the Tactics DVD