It's not every day that you see an Indian playing against the World Champion Magnus Carlsen. Even rare is the fact that you are able to draw the game. Vidit Gujrathi, India number three, faced the Norwegian numero uno in the seventh round of the Isle of Man International 2017. He made Carlsen suffer quite a bit before agreeing to a draw. How did it feel to play his first classical encounter against the World Champion, what was going through his mind, how did he prepare for the game, what did he speak to Magnus, would he have pressed more if it was someone else? We ask all these questions to Vidit and drill down this historic battle.

Vidit Gujrathi speaks about his game against Magnus Carlsen

India number three and the most upcoming player of our country Vidit Gujrathi played against the World Champion Magnus Carlsen at the seventh round of the Isle of Man International 2017. The way that game progressed just went on to show how much Vidit has progressed as a player. He kept the pressure right from move one and was able to outplay the World Champion with the black pieces. If it was someone else Vidit would have surely pushed on, but against Carlsen he decided to play it safe and simplify the game into a drawn endgame.

There are games that can change the direction of a chess career. And this is surely one of them. Vidit's confidence has increased by leaps and bounds after this draw against Magnus Carlsen. The 22-year-old from Nashik has started to believe that he too belongs right up there with the best. As this game has such great import, we decided to ask Vidit what he felt before, during and after the struggle. There is a short interview in this article, but before that you can replay the game below to get a better idea of what transpired. 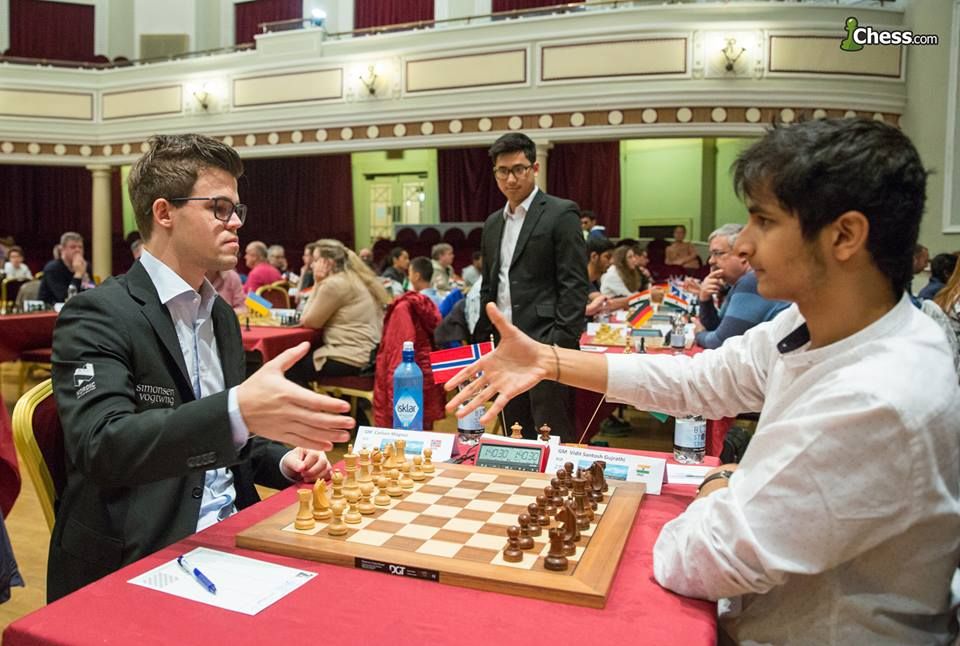 The confidence on Vidit's face shows that he is ready for a big struggle with the best in the business! Photo: chess.com/Maria Emelianova

SS: What was your reaction when you got to know that you were going to play the World Champion Magnus Carlsen?

VG: Normally you would expect a player to be excited or nervous when he gets the opportunity to play the World Champion. But I was very chilled out. I was just happy that I was getting a chance to play against Magnus.

SS: How did you prepare for the game?

VG: When you play against Carlsen, you cannot really predict the opening. So I took more rest than usual and prepared myself mentally for a long fight.

SS: What openings were you expecting from him?

VG: I looked at what Magnus would usually play, but in Isle of Man he was very unpredictable. He was more in the freestyle mode. So I did look at the normal lines and checked my notes there, but I was expecting him to play something different.

SS: Were you surprised when he played 1.Nf3?

VG: Of all the lines that I prepared before the game, I didn't spend so much time on 1.Nf3. So you could say that I was surprised to some extent!

SS: You thought a lot before making your first move what were you thinking? 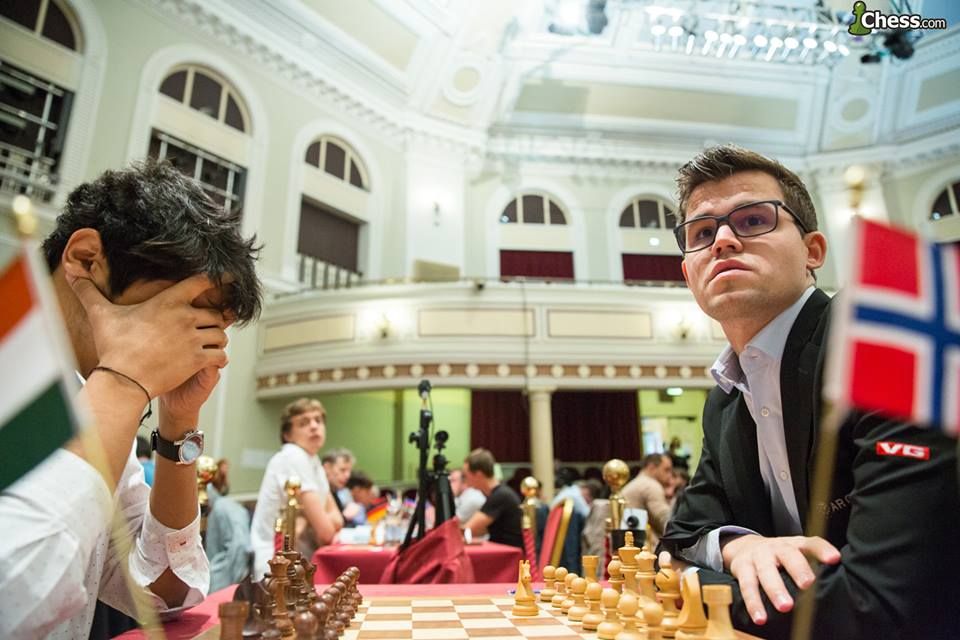 Magnus has made his move, and Vidit's time is ticking, but the Indian took his time for the first move | Photo: chess.com/Maria Emelianova

VG: I was not really thinking at that point. I didn't even know that he had made his move. I was just trying to get myself in the zone before the game.

SS: When did you start feeling comfortable during the game? 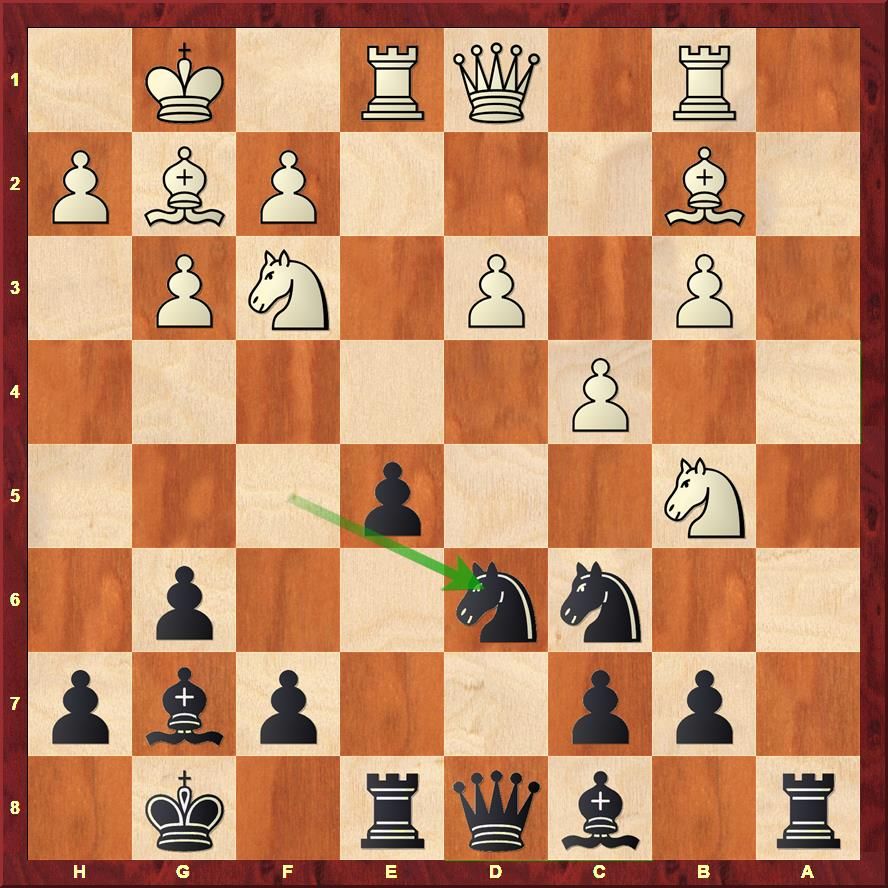 VG: When I made this move ...Nd6 I saw that all my pieces were well placed. At the same time he was taking a lot of time for his moves, from which I understood that he was not very happy with his position! 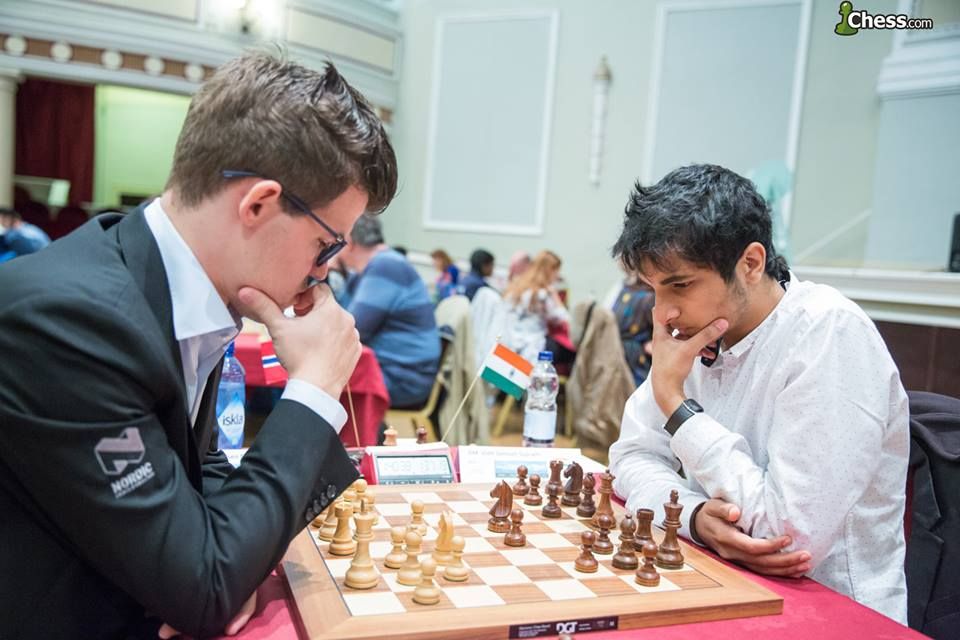 The opening went really well for Vidit and Magnus couldn't find a way to put even the slightest of pressure on his opponent | Photo: chess.com/Maria Emelianova

SS: Do you think you showed too much respect for your opponent. Like if it was someone else you would have pressed harder?

VG: I think it was happening at a subconscious level. I didn't realize that the position was so much better, because I didn't look for it. Maybe, if it was someone else I would have looked harder and tried to find more resources. But I was happy to see ...Bd7 and that I had no problems. But yes, you are right, if it was someone else I would have tried harder. In hindsight it was clearly a big mistake and something to work on in the future. 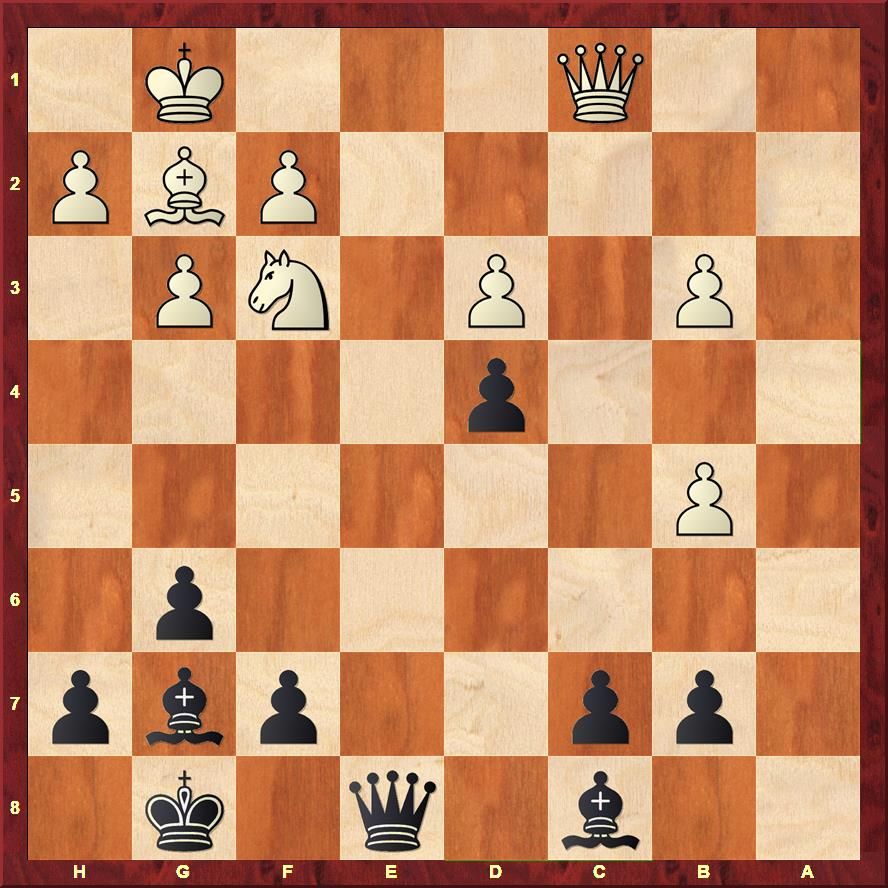 This was the position where Vidit could have kept up the pressure with a move like Qe7. Instead he went for Bd7 and after Qxc7 Bxb5 Bf1 White had less problems to solve

SS: What did Magnus say after the game? 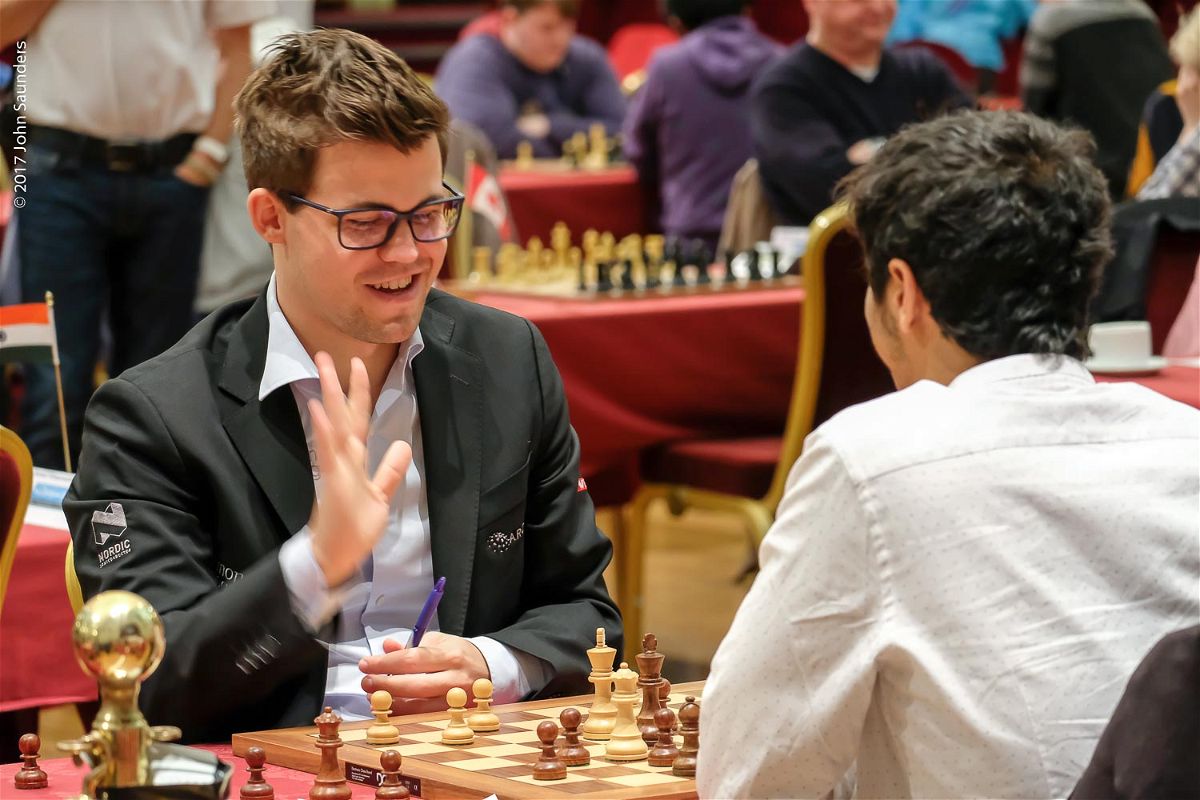 I have had enough for a day! A relieved Magnus Carlsen after the game | Photo: John Saunders

VG: We were just discussing the various positions after the game. We exchanged our ideas and thoughts. Many of our opinions matched and on some we disagreed. But overall it was a very healthy post-mortem analysis.

SS: How was your feeling after drawing the game?

VG: Initially I thought that I played a good game, which is true, but I think I could have played better. After coming back to the room, I checked with the computer and realized that I could have put pressure on him with something like ...Qd8 and even later I had many chances to push. To sum it up - I was happy with the game but the objective part of me said that I could have done better. 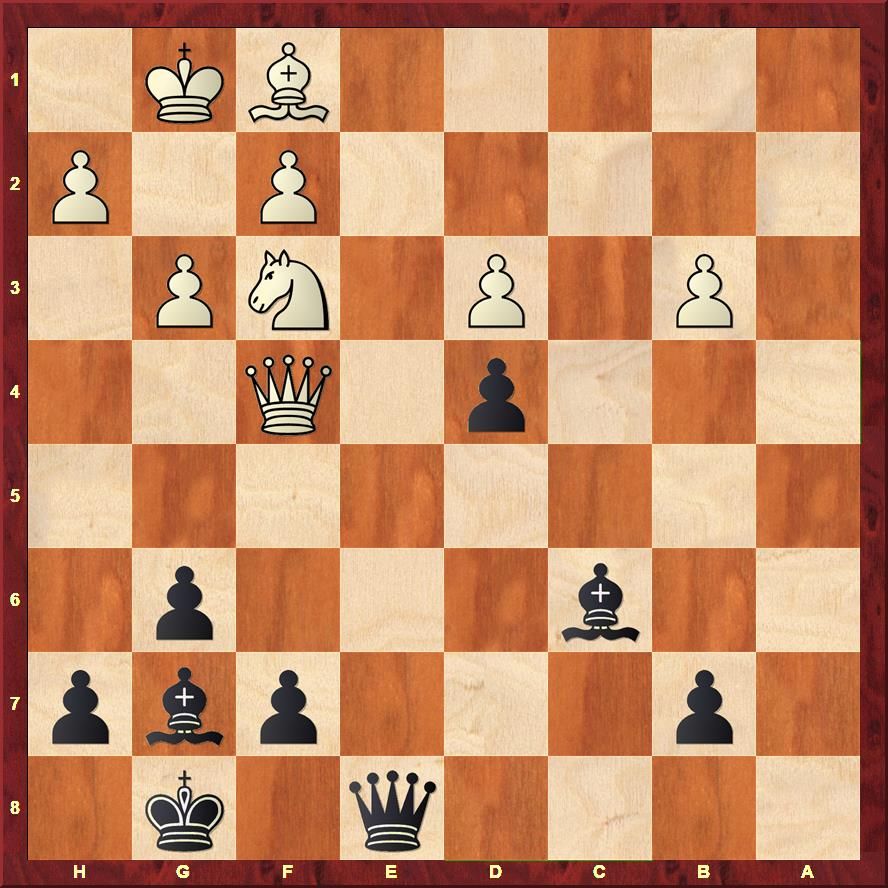 The move ....Bxf3 in the above position showed too much respect for the World Champion. Against someone else Vidit would have gone for Qd8 with ideas like Qd5.

SS: What did Nigel Short speak to you before the game? That photo has been liked by everyone a lot! 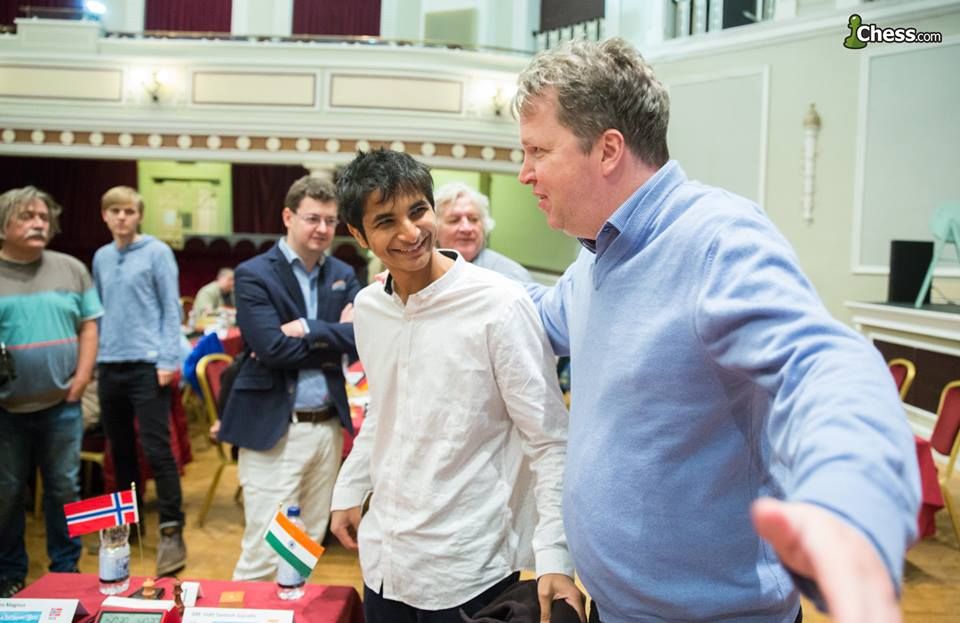 Readers are welcome to give their captions to this image in the comments section below! | Photo: chess.com/Maria Emelianova

VG: It was a nice picture indeed and a perfectly timed capture. I think some things are more fun if there is some mystery attached with it. So I think I will keep it that way!

VG: Thank you very much!

Vidit's DVDs (part I and II) on Caro Kann is one of the best materials available out there on the opening. If you are interested to play the Caro Kann with black this is all that you need!