We recently unveiled an all-new series called ‘Off the Board Tales’ on our Instagram page. The premise revolves around the stories of chess that people have a personal connection with; it could be anyone from a die-hard professional, to someone who’s emotionally involved with chess! Today is the birthday of one of India's most prolific journalists of Indian sports - Rakesh Rao. He has witnessed countless sports legends during their rise, and chess makes a good portion of it too. His contribution to journalism is invaluable and to Indian chess in its rising era. Through over 3 decades of his work as a journalist, Rakesh has given special importance to chess. This is our small tribute to this hardworking and charismatic gentleman.

Off The Board Tales #6 - Rakesh Rao 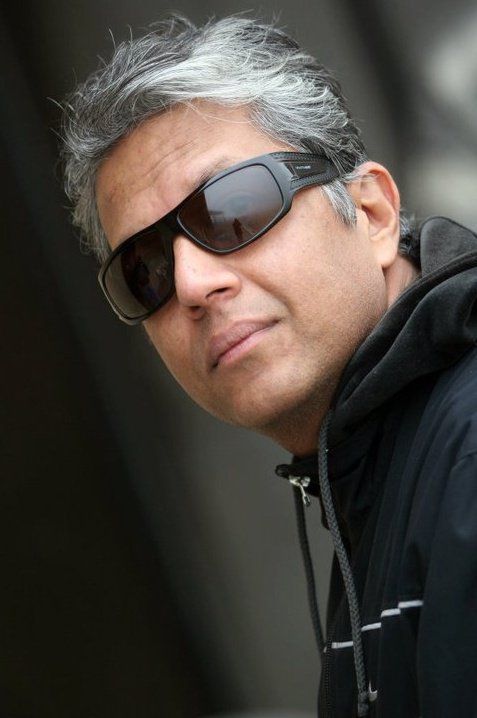 "I was very young when my dad first taught me the game of chess. I would suggest moves whenever he and his friends would play together. They began to appreciate that I could see ahead, and let me play too. Soon, I started beating them. Later in 1975, I relocated from Bhopal to Delhi and played my initial tournaments here, at age 11. I would play a few tournaments and won my first category prize - a princely sum of Rs. 50!

After captaining Hans Raj College in my second year, I had to pay more attention to serious academics, similar to many middle-class families at the time. I did regret the constraints that made me move away from chess but what I was destined to witness in times to come was something I never saw coming, and what I believe to be the work of the Almighty alone.

With Harikrishna Pentala and Viswanathan Anand; an evening well spent!

I got to see both chess and journalism evolve in India, on one hand in the form of Viswanathan Anand and countless talents, and the other simply through the digital revolution and massive changes in the process of publishing reports. I spoke to Anand when he became the first ever Grandmaster at the age of 18, knowing in my head that he would serve as a role model for many. My first interview of Anand was on his birthday - 11th of December, 1987 - minutes after he made his second Grandmaster norm. And it was just the beginning...

I was a sub-editor at the time, and couldn't be away from the office till late in the evening, as I was required in the office. I still found a way to watch the tournament - or rather, history - unfold before me, and would rush straight back to the office typewriter. There were also queues to use the machines, and there was certainly no such thing like the Internet to fact-check the material. So, you had to be extra precise and fast when writing the story, and at the same time avoid mistakes due to a lack of a backspace function! Additionally, the report you wrote was never final, due to it having to go through scrutiny, to the point where you could only reliably recognize your own work by checking the title! Looking back, I would not describe those days as tough or easy, and more so just acknowledge how different it was than the current generation. 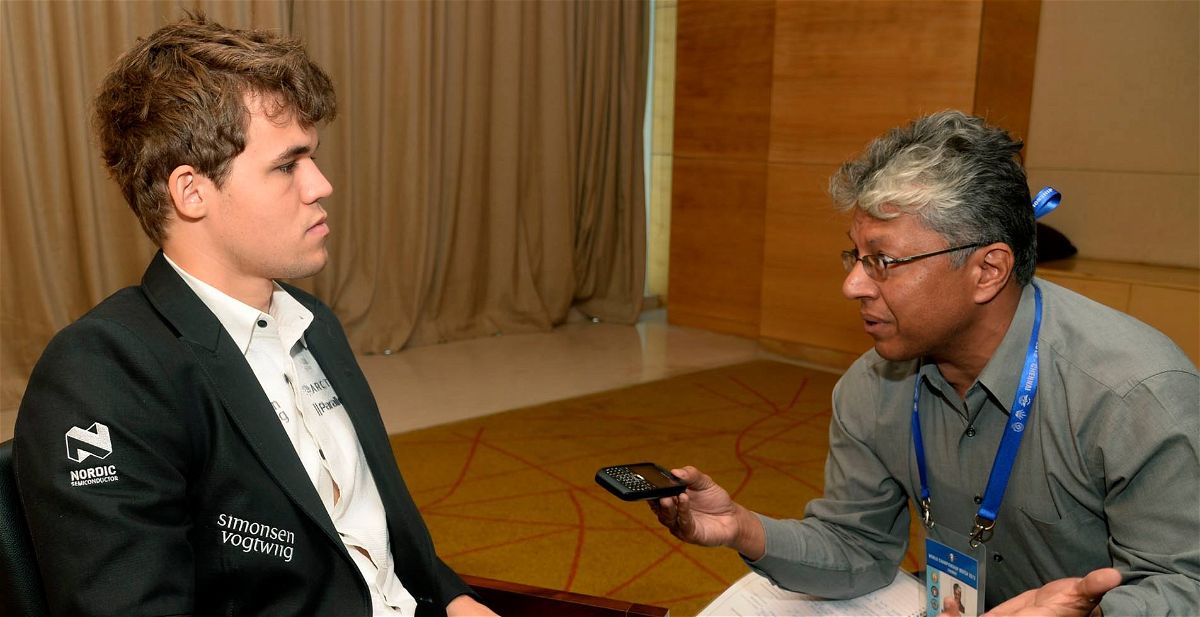 An interview with the then-newly crowned World Champion, Magnus Carlsen, in 2013.

An animated interaction with Tiger Woods - at the Bahamas

In the year 2000, I did an interview with Viswanathan Anand, Leander Paes, and Sachin Tendulkar. They were the new big names of the millennium, and were special due to taking their spot on the top recently in the 90s. I asked them the same questions and got delightfully different answers. Covering the Anand and Kramnik match, in Bonn in 2008, I remember the minutes soon after he won. In anticipation of his triumph, a packet of laddoos from an Indian store was at hand. Many journos called them “some magic balls”?? Soon thereafter, Aruna lined up interviews, in 15-minute slots, beginning from 11 am the following day at the Hilton. Tentatively, I was second on the list since the first one, the 11:00 slot, was taken by Frederic Friedel of ChessBase. I mentioned to Anand and Aruna that I would land up at their room to chat before 10:00 am since a 15-minute slot would not do justice to the magnitude of the triumph. I vividly remember walking into their room on the fifth floor. Aruna, despite being sleepy from the previous night, was as gracious as ever. After a warm welcome, she offered coffee before I started that marathon interview with the undisputed World champion. Anand was relaxed and shared several unknown facets of this pre-match training and nuggets from the course of this historic battle. I also remember the conversation extending to the point where there were others outside the room, waiting for a word as well. It was doubly special, it being his first interview of the morning. When it came out, ChessBase was very sweet and published it with an image of the Sportstar Cover that read “Master of the Universe” on their site. Back then, I wondered what made my interviews so special, although now I have a better theory…

Soon after Kasparov's arrival for the World Championship, I had a half-hour long chat/interview in Chennai!
Autographed copy of Kasparov's interview by Kasparov himself!

During this time, I noticed that nearly anything I wrote for The Hindu was re-published by dozens of different websites worldwide. It had always seemed like chess coverage was done by former players and catered to hardcore enthusiasts of the game, with significant and deep analysis for serious study. It remained full of chess jargon and writing such as 'and the rest was a matter of technique', or ‘to sac an exchange’, which was not only incorrect grammar but also incomprehensible to a casual chess enthusiast. Probably, what I offered with my writing was something that even a beginner could take joy and pride in, and I feel that was my strong suit, which garnered a lot of attention. I cannot write in that precise manner as I am not a chess player myself, but my style still got attention for its simplicity and ease of understanding, which was close to unheard of in such a competitive scene at the time.

“What would be your advice to any aspiring chess journalists?”

I’ve been lucky to interview some of the biggest “who’s who” of the sports world, and in most cases, it was simply being in the right place at the right time to witness history being made. Just remember not to be intimidated by the person you are interacting with; if I had been too shy or timid when my chance was available, I might have fumbled and not been at my best. The simple principle is to treat everyone you speak to, as an equal, while still regarding them with a polite and respecting tone. Of course, it is never possible to conjure such classic moments in thin air, and so it is usually a matter of patience and observation. A keen eye and quick thinking can go a long way, and suddenly you may spot your opportunity.

My thanks go to the Almighty Himself, and I am always grateful for what I’ve experienced during this fascinating journey, which my carefree childhood-self could never have imagined possible."

We wish Rakesh a very Happy Birthday, and success in future endeavors.