The divine tournament - A flashback (Part 1)

We are on the threshold of season 7 of 360 ONE (formerly, IIFL Wealth) Mumbai International Chess Festival. The festival comprises two events: Open & Junior (Under-13). While the staging of ‘Open’ event is common & understood, lots of questions were raised as regards to U13 – why an Under-13 event? What purpose will it serve? We get answers to these questions from none other than Praful Zaveri - the brainchild of this event! The first of this article is the flashback leading to the birth of this tournament (penned by him in 2016) while the 2nd part will answer as to what it has achieved during the past 6-seasons!

I have a dream . . .  so said Martin Luther King Jr on 28th of August, 1963 and it inspired the entire humanity to dream, to believe and to make impossible the possible!

Of all the dreams I have nurtured, the most cherished and close to my heart is to open a state-of-the-art residential chess school coupled with my desire conduct an annual event, which becomes synonymous with my city. My sojourn at Dubai Junior 2014 with students of my chess school made me dream of holding a similar event so that our kids can get exposure to the highest level of chess tournaments. My students, Ridit Nimdia (joint 2nd), Soham Palkar (9th) and Rahat Mhatre (21st) performed amazing well in this tournament and laid foundation to having a similar event back in India.

The Dubai Junior has carved a niche for itself and is a standalone event in view of the following:

2.  It is held in a classical format (with double rounds scheduled on just 1 day).

3. The infrastructure and playing conditions here can be compared to only few chess tournaments in the world!

The imposing Rook! - Dubai Chess & Culture Club
Hard to find a better playing hall than this!

This dream turned into an idea and ignited a fire within me to ensure that it becomes a reality. This quote of Swami Vivekananda, which is etched in our school became the guiding vision to reach out for the goal:

Take up one idea.

Make that one idea your life - think of it, dream of it, live on it.

Let the brain, muscles, nerves, every part of your body, be full of that idea,

This is the way to success!!

The idea was shared with a good number of my friends and well-wishers and they all encouraged me it would bore fruits. However, dreams need medium for its fulfillment more so for this particular dream, which called for requirement of tons of finance! The influential thinker from Ghana, Lailah Akita has rightly said that that divine powers are always at work to help you fulfill your dreams and, I saw the dream turned into reality on 27th August, 2014!!

It was the free day of the 10th Asian Schools Chess Championship at Taiwan and a trip was arranged for the Indian contingent to get a glimpse of the beautiful city of Taiching. As the ‘coach’ of Indian team, it presented me an opportunity to closely get acquainted with all the players, coaches and parents. And, there I came into contact with Mr. Karan Bhagat and Mrs.Shilpa Bhagat – parents of talented 5-year old, Kush Bhagat (chess is getting younger and younger!)

Though we are from the same city, it was our first interaction (apart from a brief introduction at the Taiwan airport) as Kush had taken to chess just a few months back. During our brief discussion I just shared my vision that Mumbai needs good number of classical events so that our children are able to compete equally at the State, National and International Chess Tournaments. However, the absence of sponsors makes it difficult to conduct events at regular intervals.

This is where the Bhagats assured me that they can help with sponsorship and asked me to approach. Honestly, I was not aware of anything about Karan Bhagat & Shilpa Bhagat (Only later I came to know that he is one of the founding member, Managing Director and CEO of IIFL Private Wealth Management (now, 360 ONE while Shilpa Bhagwat was crowned as ‘Mrs India in 2013).  however, what I found was the sincerity with which this assurance was given. The next couple of days made the bonding stronger with this family:

The trip was indeed successful for the Indian contingent as we returned with rich haul of medals. Kush and Raahil were amongst the medal winners (Kush won Silver in the U-5 section while Raahil clinched Gold in the U-7 section). It was a proud moment for me and the joy of donning India’s colour cannot be described!

Memories to cherish for lifetime – with the medal winners (at the front are little Kush and Raahil).

On return, the dream took a backstage due to hectic chess activities at our school until a call came from Mrs. Shilpa Bhagat in February 2015 to extend an invitation for a chess event. This is where I took courage to place a proposal to hold Mumbai International Chess Tournament! Without much questions, Mr. Karan Bhagat approved sponsorship of Mumbai Junior Chess Championship. As we say, the rest is history! So, Mumbai has now one of the richest Junior Tournament in the world and it beckons all the brightest talents in the world to be a part of this event.

Here are some of the features:

2. The tournament is a classical 9-round Swiss League with a double time-control of 90 minutes for 40 moves followed by 30 minutes for rest of the game with 30 seconds increment from move 1.

3. The playing conditions offered will set a new benchmark for chess organization: the venue of the tournament – Mount Litera School International pertains to international standard and all connected with the event will cherish the memories for life time!

4. All the tables will have Wooden Chess Boards (square size 2.25”) with Ebonized Weighted Chessmen:

5. In keeping the AICF decision for implementation of ‘Dress Code’ all the participants would be required to attire in T-shirts provided.

6. The event would be streamed ‘Live’ on the official website with commentary. By using DGT electronic chess boards, the top-15 games would be shown ‘Live’.

8. We would be providing games bulletin to all the participants in CBH/PGN format (the file would be mailed).

9. A spacious seating arena would be provided for parents and the accompanying persons. They would be able to watch the players in action through CC TV camera. Here too, provision would be made to project the game ‘Live’.

10. Since the Junior is scheduled in the evening (from 4.30 pm), the sponsors were generous enough in approving an ‘Open’ tournament with the same prize fund of 7.50 Lakhs. This is modest in terms of other international events however; it would be compensated in form of one single round to be played per day. I feel this is enough to attract good number of titled players.

11. Last but not least, this signals the event to be held every year!

Welcome to my beautiful city!! 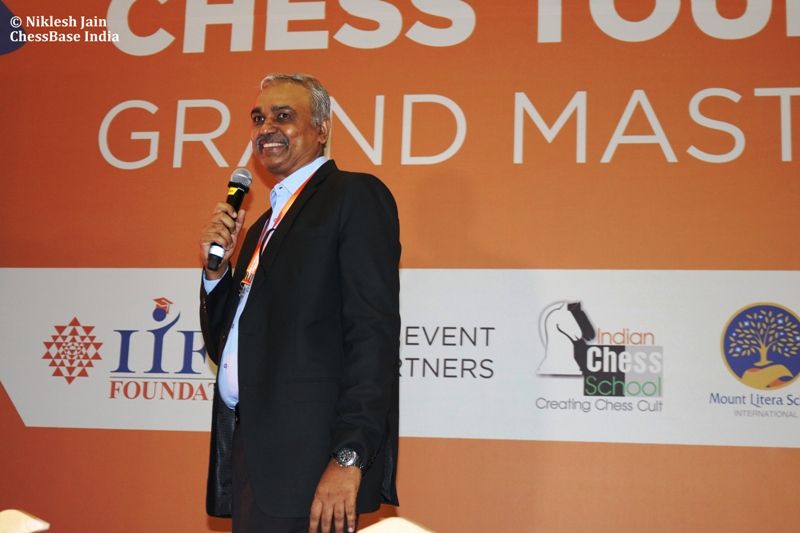 Praful Zaveri is the founder of Indian Chess School and holds the titles of FIDE Instructor (1st FI from India), FIDE Arbiter (FA), FIDE Trainer (FT) & FIDE International Organizer (FIO). He is also the author of The Chess Course – the book which has sold 100,000 copies!