A look at "The Complex Najdorf"

The Sicilian Najdorf is one of the most popular openings in chess! But what do you do if you wish to enter the Najdorf universe for the first time? What would be the right way to learn such complex opening? Grandmaster Victor Bologan proposes this repertoire to answer all the main lines, and sidelines. The Najdorf is a dynamic opening which matches those players who like to play with intensity. But a less well-known rationale is that if one wants to become stronger as player, then the Najdorf is a gym for the budding chess mind! Thanks to a wealth of ideas, strategic themes and tactical patterns, the Najdorf has all one needs to learn how to play the middlegame. Photo: ChessBase

Reviewing the complete repertoire against e4

After a friendly match I won narrowly 7:5 (+6 -4 =2) I realized the opening I was using for Black, an opening used successfully by Sergei Tiviakov, wasn't helping me any more in my chess progress. A friend correctly pointed out the following: if one plays a weekend tournament, especially when higher-rated, it's normal to have Black 3 out of 5 times, hence the need to be able to create unbalanced positions, full of possibilities, like the one arising from the Sicilian. My friend, in fact advised, me to learn the Najdorf.

Obviously when I want to learn an opening I'm inclined to learn it from the best! In this case Victor Bologan's knowledge of opening theory is undisputed. In the introductory video to this series, Bologan mentioned he knew Miguel Najdorf personally, and they even played few blitz games together. 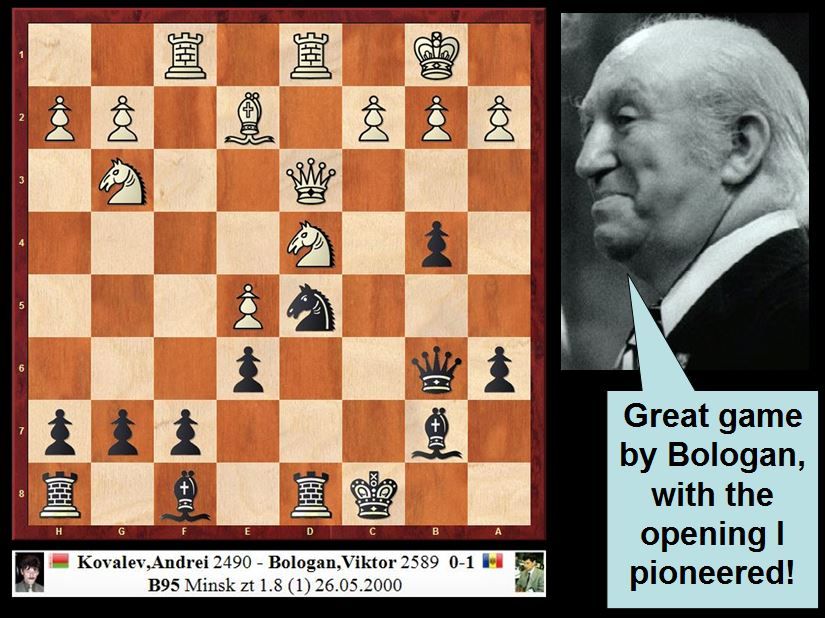 And in fact Bologan played some amazing games with the Najdorf!

An important argument for learning the Sicilian Najdorf, as Bologan briefly mentions, is that it's full of strategical and tactical themes. There are endless ideas to discover, but most of all it's also a romantic opening — an opening where one can sacrifice a pawn, or more, to obtain the initiative or go for a mating attack.

He also mentions the names of two champions who are dear to all chess players: Bobby Fischer and Garry Kasparov, who have used the Najdorf extensively, and he also mentions Kramnik, another giant who has retired from the competitive chess arena.

Whenever a player, and in this case also a professional coach, of the calibre of Bologan, mentions some names of players who have used a certain opening, I always search for their games —partly by curiosity, and partly for learning — thanks to that amazing resource which is Megabase 2019. 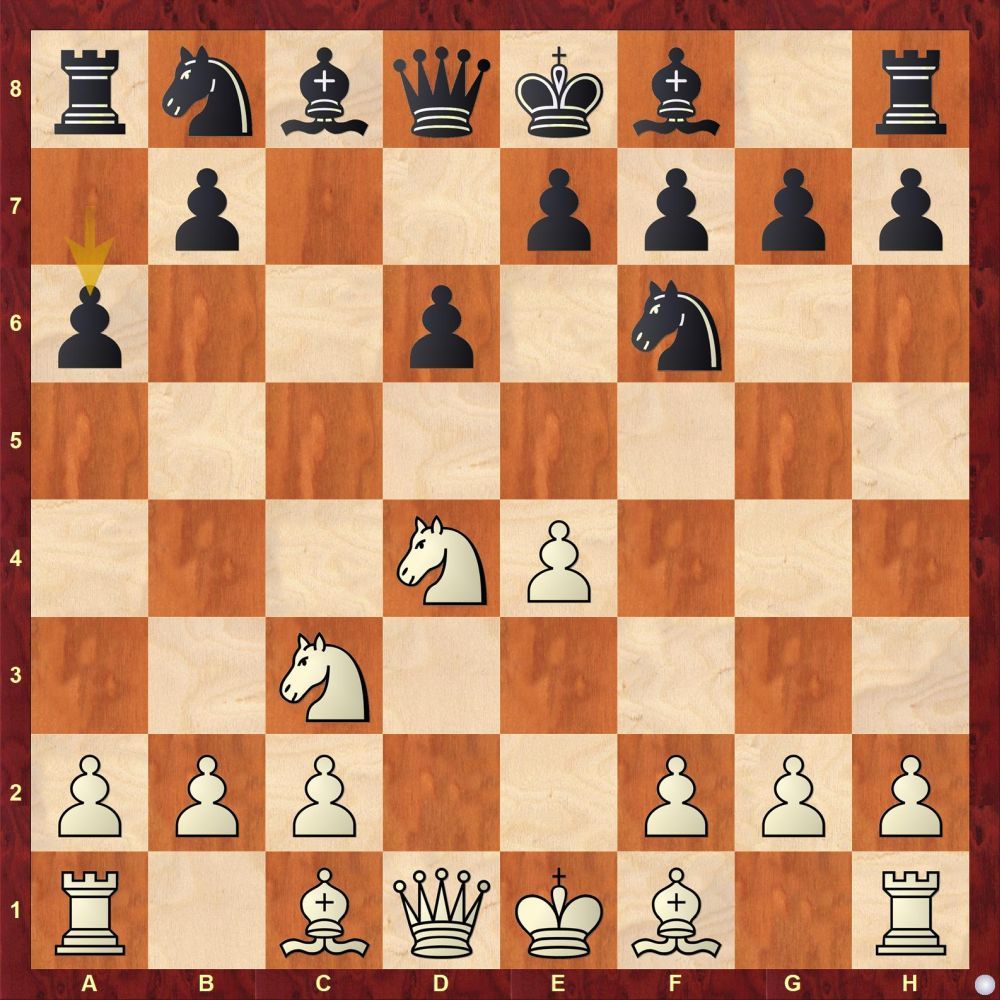 I found the following games by Fischer, which impressed me enough to share them.

What impressed me of these games is how a very young Fischer was able to beat opponents who were clearly professionals, within a bar minimum number of moves, basically a miniature (25 moves or slightly more). I've watched more games than those given here, so I could also compare the young Fischer, to the mature player marching triumphantly toward the World Championship.

Since I'm not a car dealer and I don't have to sell this opening, so I'd like to show also some games Fischer lost in the Najdorf.

Bologan points out Kasparov used the Sicilian Najdorf throughout his career as Black's answer to 1.e4.

For a more complete collection of all Kasparov's games, ChessBase has released a Kasparov Master Class, but if instead one is interested in learning the Najdorf directly from the Maestro, there's a two volume series in which he teaches it. 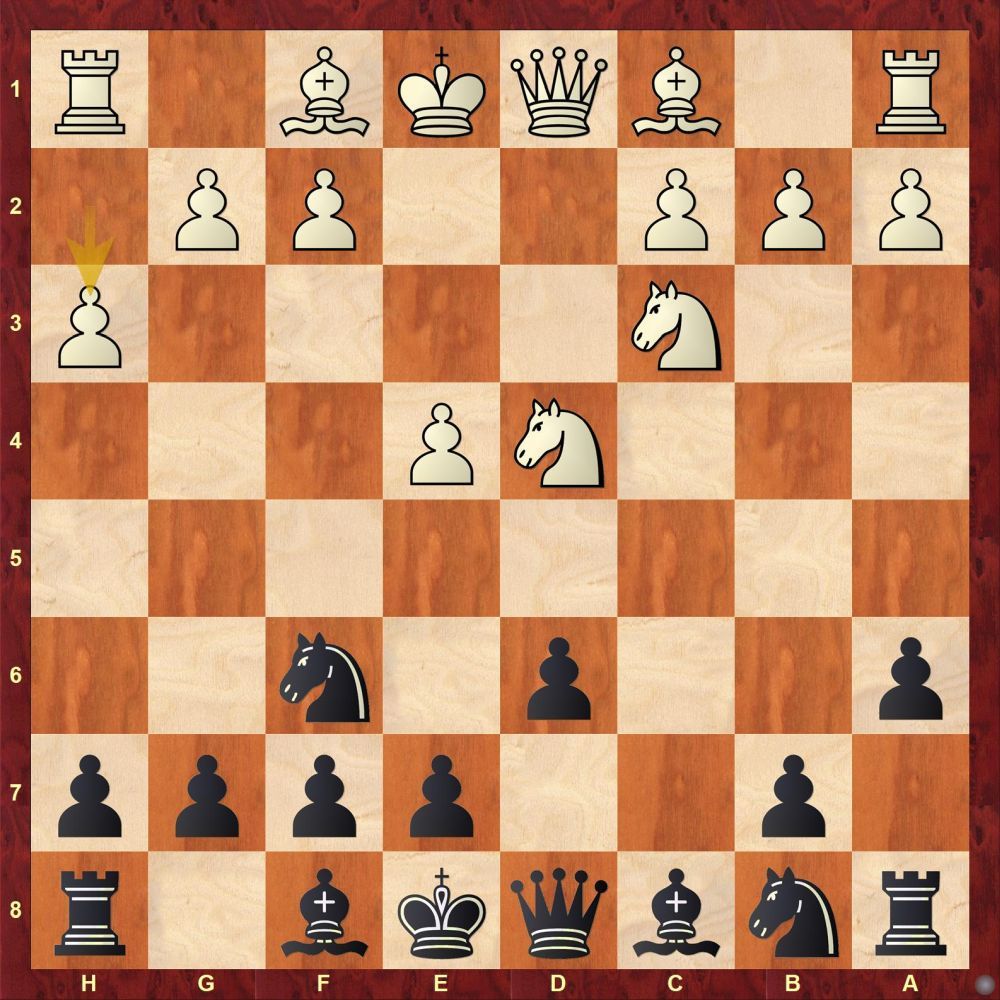 Obviously h3 can be interpreted as a waiting move, asking Black the question: "what are you going to do?" and revealing Black's intentions. But of course the move h2-h3 has also other important goals, like the support of the attack on the kingside with g4-g5. 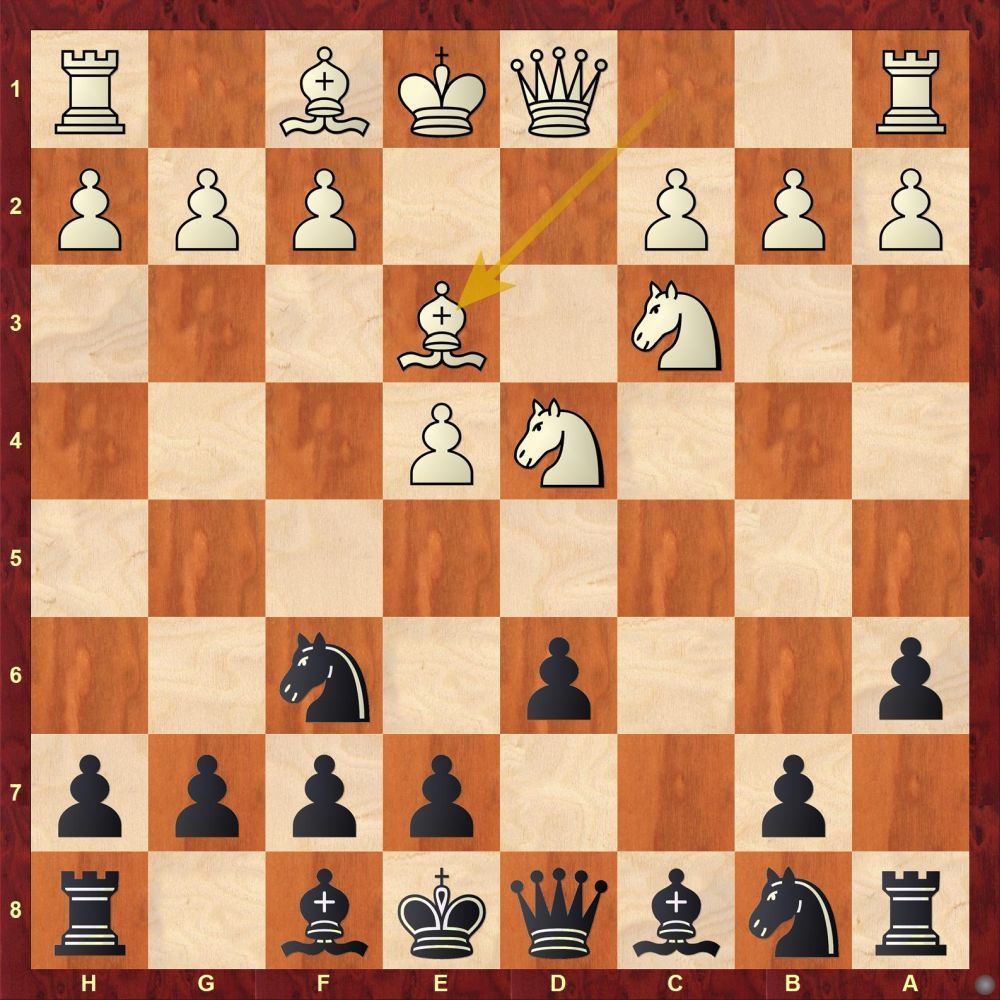 This line is called English attack and is quite a dangerous weapon. In fact, another ChessBase author, Daniel Gormally, dedicated an entire DVD to the English attack.

Bologan quickly shows the main ideas for White, where to develop the light-squared bishop, and the important central fight for d5. 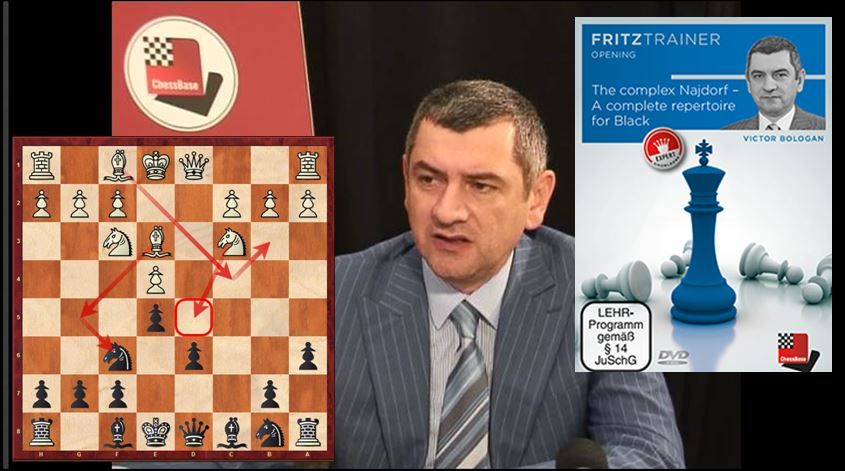 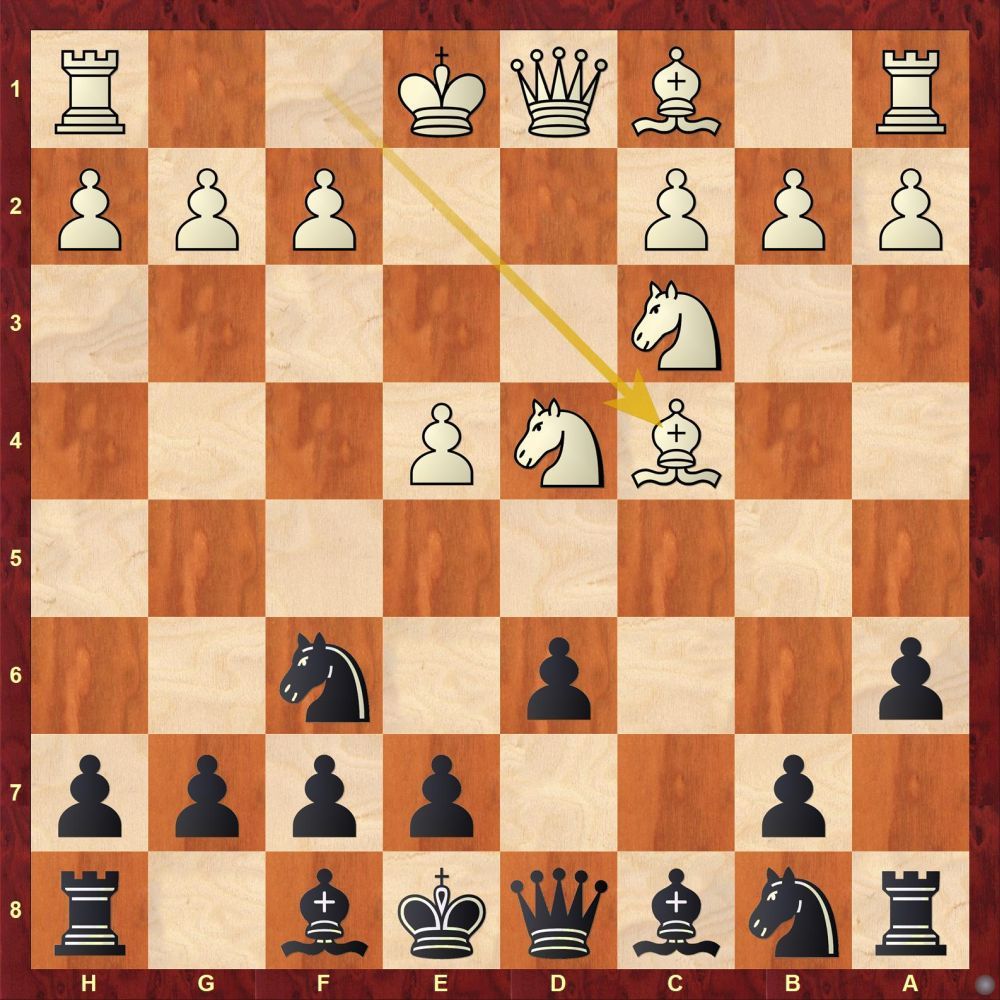 This has been a favourite — and main weapon against the Najdorf — of Fischer and Kasparov.

In fact, sometimes it is also called the Fischer-Sozin attack.

The ♗c4 is placed on that diagonal to attack F7, and Bologan recommends continuing with 6...e6: 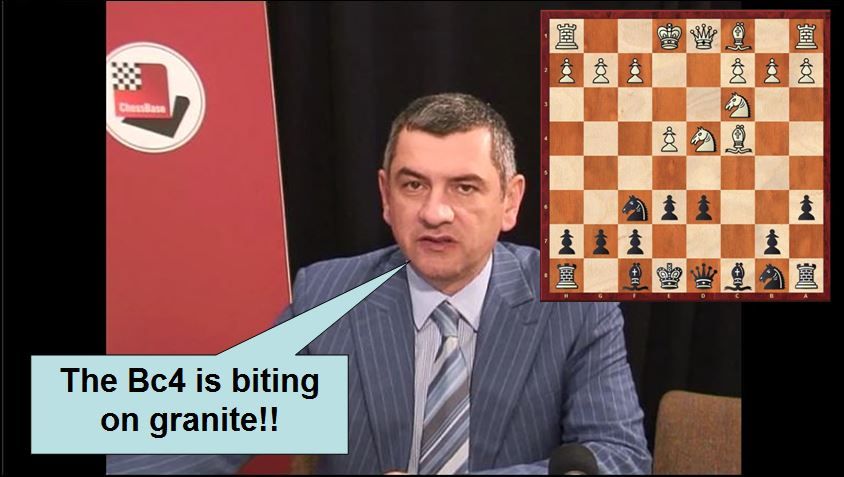 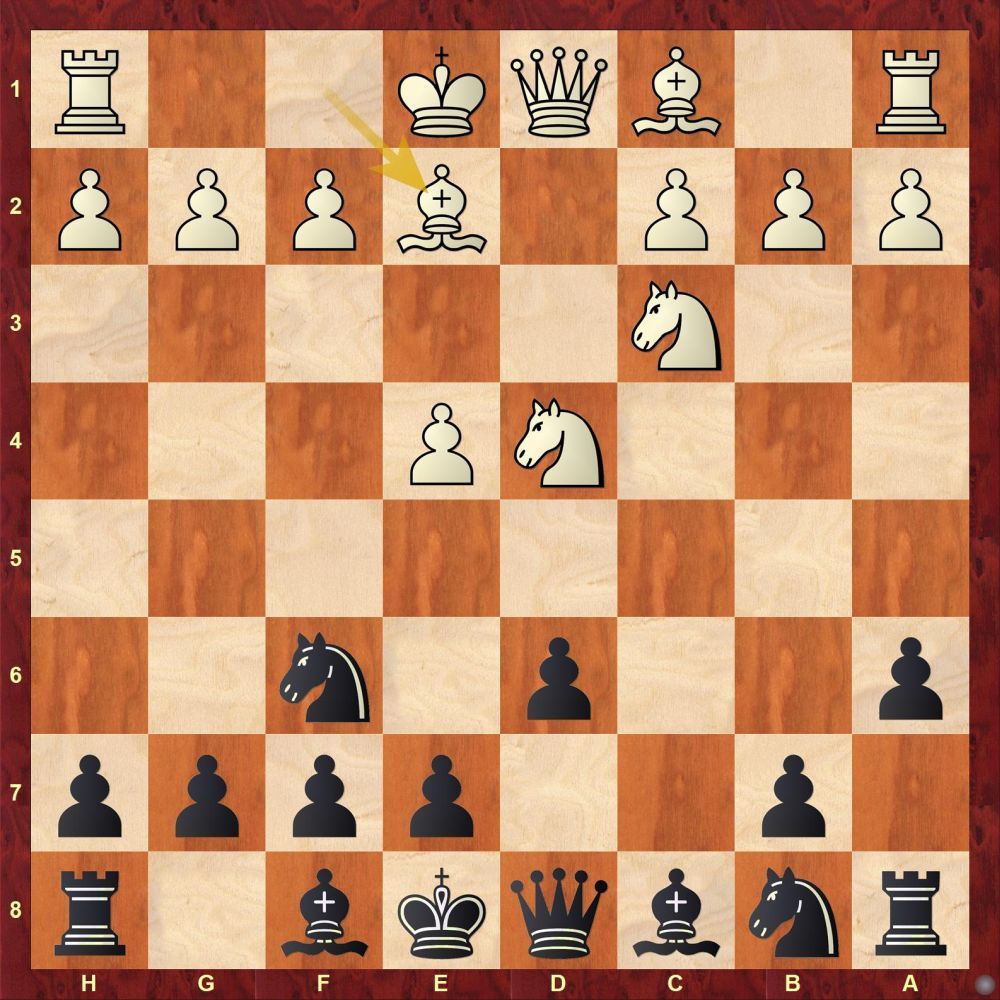 In a database like Megabase 2019 one can find over 38,000 games with this line. Clearly the problem is how to select the important games to watch. Bologan believes the move 6...e5 is the best for Black. Here a sample of games to give an idea of the recurrent themes found in this line:

While listening to the videos, I noticed another important player mentioned few times by Bologan: Veselin Topalov. Topalov is a player with a long career who is still near the top. It's worth searching and watching some of his games with the Siclian Najdorf, to better understand his interpretation of such a quintessential opening. Topalov, like Fischer, has played against the Najdorf as White, and been a devotee as Black, giving him a deeper understanding than most.

Here a sample of his games as White, in which he won against some illustrious names.

And next, of course, we need to see Topalov with Black using the Najdorf.

In our preparation we must always be balanced about two aspects:

1. We need to motivate ourselves, and that can be done through the games won by the champions we love, in order to use those champions as role models.

2. We need to be careful to avoid losses, because we were too optimists. And this can be done watching the losses of those champions we love, because if it happened to them, and they are the best professionals in the field, it surely can happen to us too.

Obviously a good purchase, for those who don't want to buy Chessbase 15, can be the ChessBase account, because the online database web app has all the latest games, and one can search them also for studying a particular opening like the Najdorf.

Summing up: there are 25 videos which, together, try to cover all the most important moves played by White, as well as various sidelines. There is a database with 50 model games. And there are 10 interactive videos, which present positions, where one has to find the right move or plan.

Bologan has been quite honest throughout the DVD. He has mentioned that in order to use the Najdorf successfully one needs to be motivated, full of energy, and ready to calculate long lines. It is not an opening for those who don't understand the value of a tempo, because Bologan mentioned one needs to play each move half a tempo faster than the opponent, which is a funny way to tell us the type of players we must be. Aware of this quality, throughout this review I've provided the games of high powered players, to use as role models for learning the Najdorf.

Bologan reiterated (and with good reason) that just watching this video series will make a player stronger, because there are many ideas one can learn. However, as Bologan points out, in order to learn the Najdorf is not enough to just watch passively, but one must also play many practical games, to gain experience. Last but not least, if one is serious about playing the Sicilian Najdorf, another DVD is needed. Many players, as White, play the anti-sicilians as a way to avoid studying the theory of the open Sicilian. Hence, another video series from GM Daniel King would help against White tries like the Grand Prix attack, the Alapin, the Smith-Morra or all other possible answers White can throw at us, which are not presented in a thematic DVD on the Najdorf.

While working on this article I've watched a lot of games, to select the best to give our readers. I've been impressed with the so many different plans, ideas, and structures found within this same opening. The Najdorf seems endless excitement, and a chance to learn something new as opening repertoire, as well as middlegame ideas.

If you are looking for a short intro into the world of Najdorf then we recommend this video by Atul Dahale:

The article was edited by Shahid Ahmed.