A big tournament was held in Jaipur in the memory of Ankit and Sakshi Bhargava from the 29th of January to 2nd of February 2018. Four grandmasters - Himanshu Sharma, Saptarshi Roy Chowdhury, Pravin Thipsay and Sriram Jha, and three IMs Sayantan Das, Suvrajit Saha and Dinesh Kumar Sharma took part. The event was closely contested and three players finished with the same score of 8.0/9. It is GM Sriram Jha who won the event with a superior tiebreak and took home the top prize of Rs.80,000/-. We have a report with pictures, game analysis and information of all the prize winners sent to us by Rishi Kaushik.

The 1st Ankit Sakshi Memorial Open FIDE Rated Chess Tournament was held at Maharishi Bhrigu Sadan, Jaipur from 29 Jan to 02 Feb 2018. A total number of 420 players which includes four grandmasters, three International Masters and 262 International rated players from different parts of the country participated in the event which was spread over five days with a time control of 90 minutes and 30 seconds increment from move 1.

The total prize fund of the event was Rs. 5,00,000. The tournament was played under Swiss System with nine rounds and had Grandmaster Himanshu Sharma of Railways as the top seed. The event progressed on expected lines as seeded players registered comfortable victories in the earlier part of the event. Hard fought battles ensured a thrilling end as three players tied for the pole position with eight points. With better tie-break score, grandmaster Sriram Jha of LIC emerged as the champion to pocket a cash prize of Rs. 81,000/- along with the winner’s trophy while Grandmaster Saptarshi Roy Chowdhary of Railways finished as the first runner-up. International Master Sayantan Das of West Bengal third. 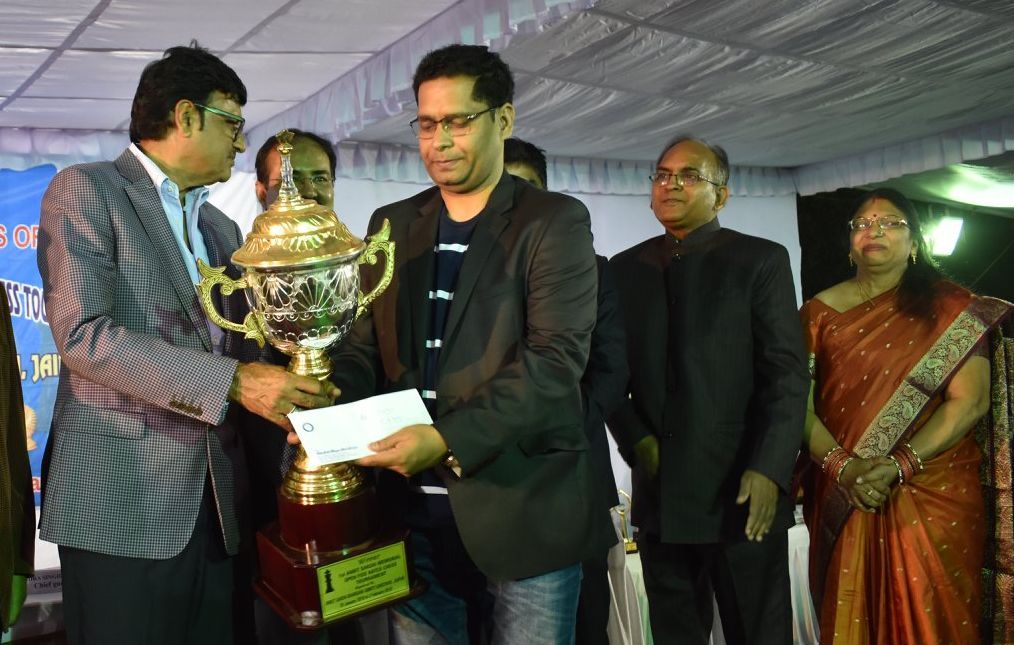 GM Sriram Jha receiving the winner's trophy and a cheque of Rs.80.000/- 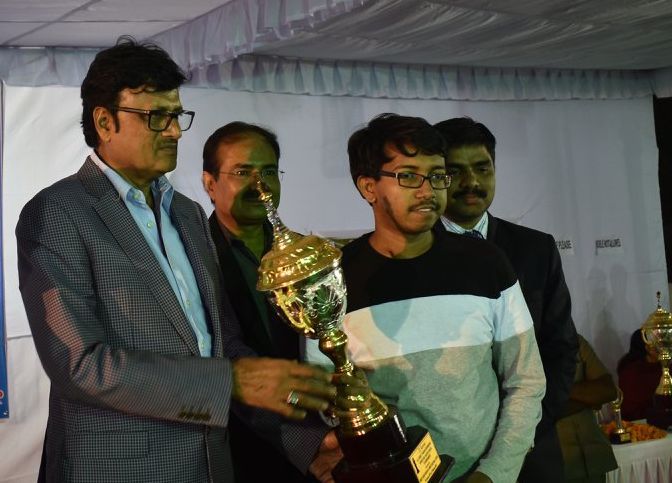 Here is a nice victory by GM Sriram Jha against IM Suvrajit Saha. Just have a look at how a small edge in the opening was milked by Sriram and brought to its logical conclusion through powerful moves.

In the last round Sriram Jha had to work hard for the full point but he did so with some excellent technique in the opposite coloured bishop endgame. We are not sure if the position is a 100% win for Black and there is also a variation we analyzed which gives White ideas on how to defend, but this is something that we recommend the reader to dig deeper into.

In the rating category of Below 1600, Rituraj Singh of Uttar Pradesh secured first prize while in Below 1200 category, Avinash Srivastava of LIC finished first. Siddhali Shetye of Maharashtra was adjudged as best female player while Gautam Jangid of Rajasthan became  the best among unrated players. Harshit Arya of Haryana, Shah Moxit J of Gujarat, Harshit Pawar of Delhi, Aditya Maderana of Rajasthan finished best among Under-15, Under-13, Under- 11 and Under-9 age categories respectively. Kapil Dadhich and Raghav Bagri finished as the best Rajasthan player and Best Jaipur player respectively. The veteran prize bagged by season campaigner Kantilal Dave of Rajasthan and Rudradaman Mertia was the youngest player of the event. In a colourful closing ceremony, Shri. Rajendra Singh Rathore, Hon’ble Minister of Rajasthan gave away the cash prizes and trophies to the winners along with Shri. Ajay Ajmera, President ARCA and Shri. Ashok Bhargava, Secretary ARCA. 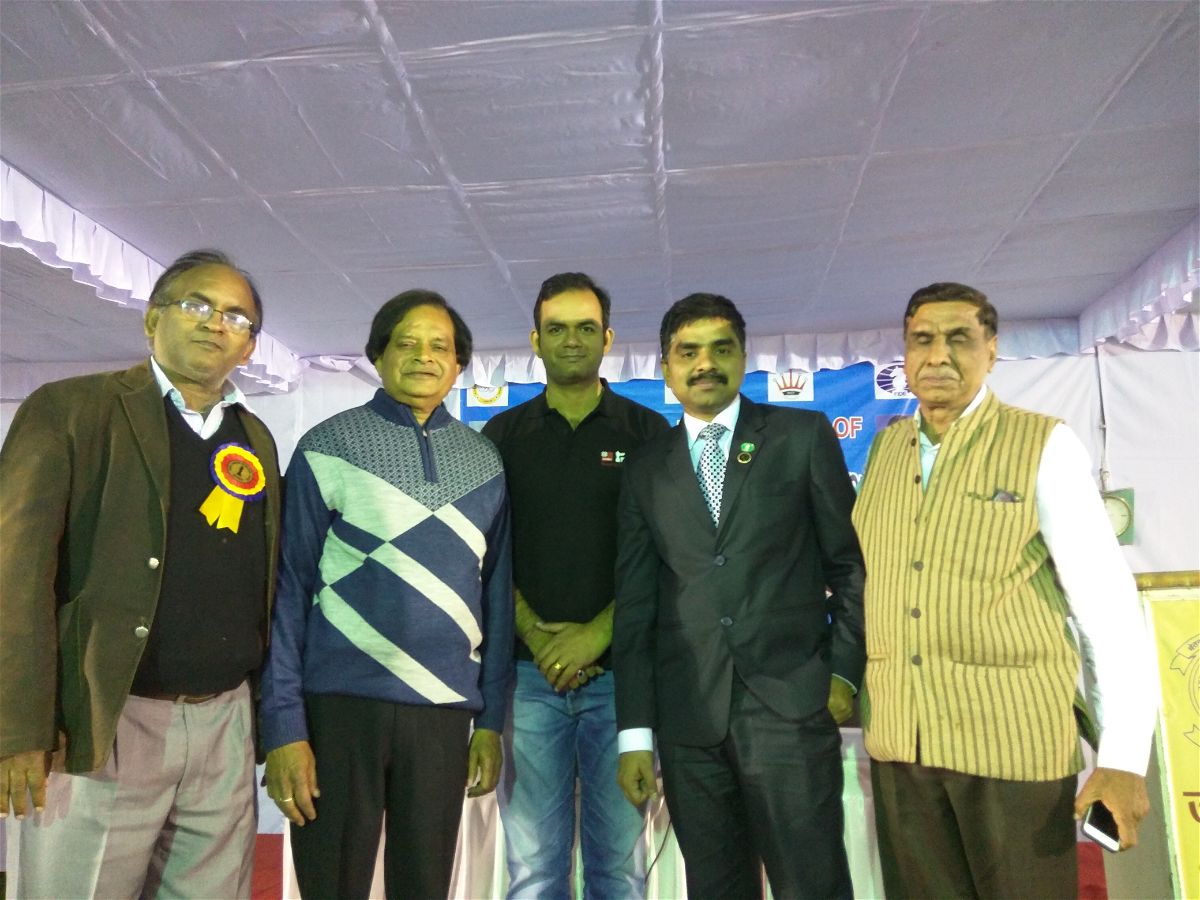 After the tournament came to an end there was an interactive training session with GM Pravin Thipsay where he spoke to children about different topics. 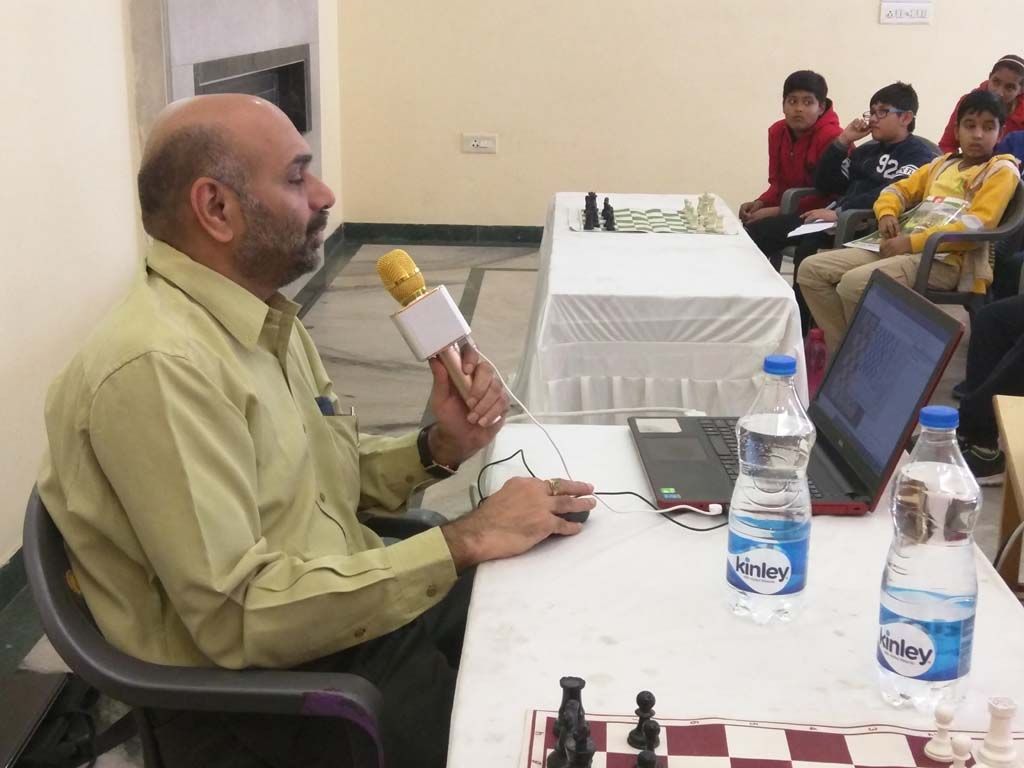 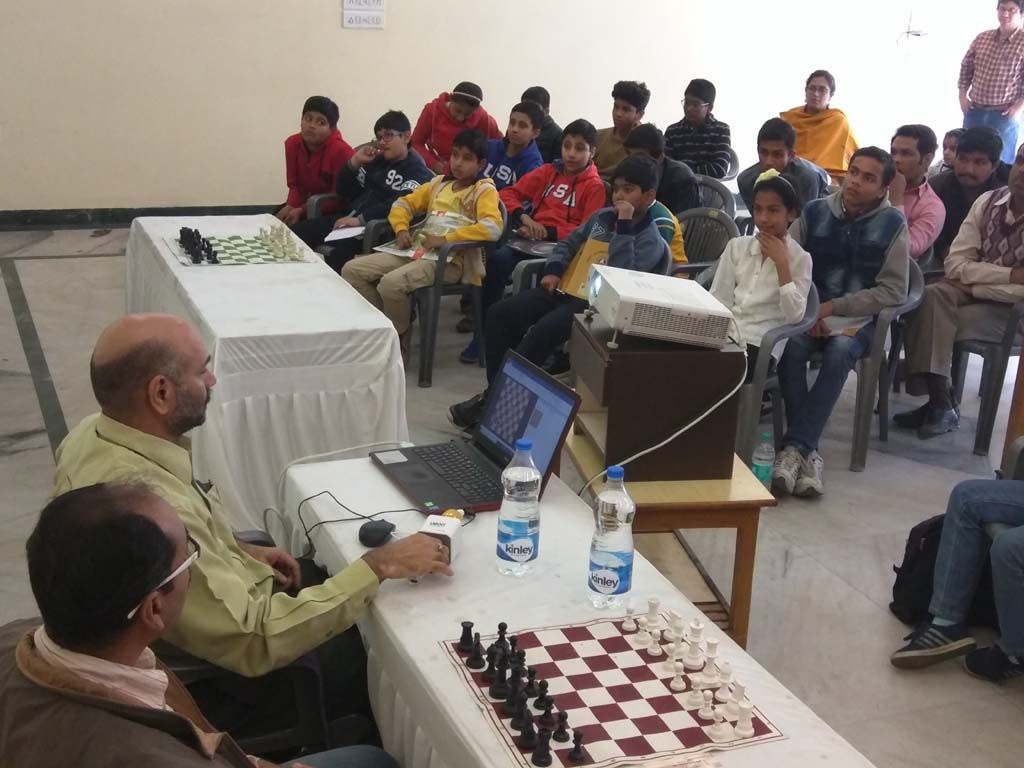 Students of various ages had gathered together 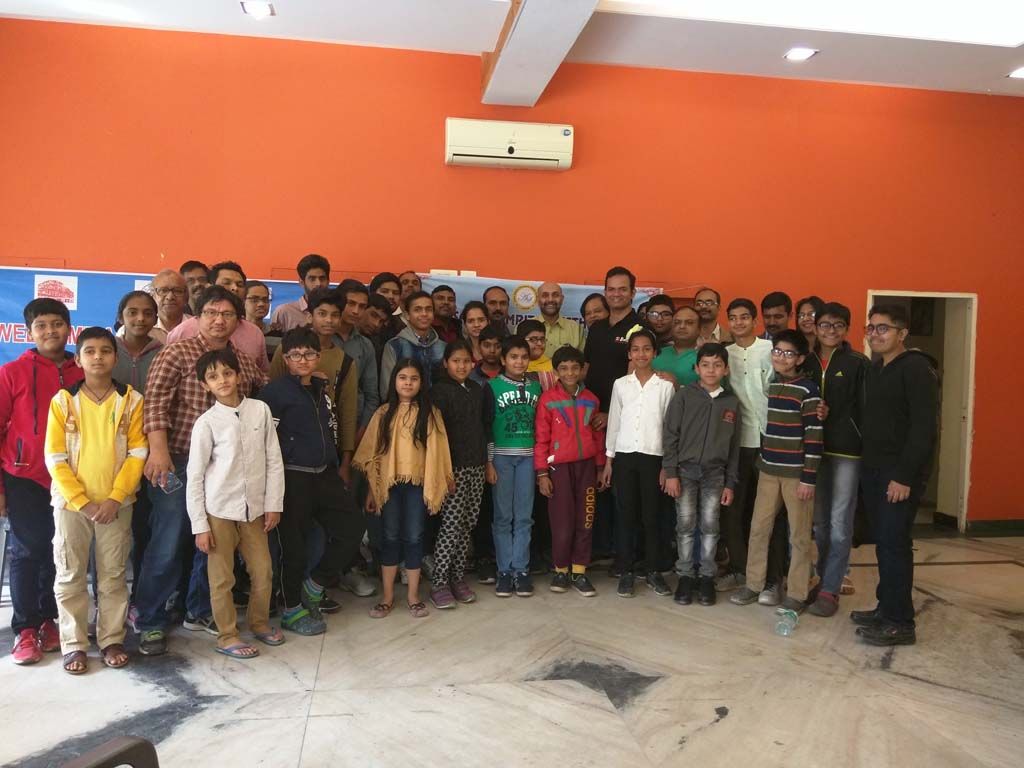 A group picture after the camp ended

Below is the lecture of Pravin Thipsay given in Bihar towards the end of 2017 which gives you an idea about what genuine and knowledgeable teacher he really is. 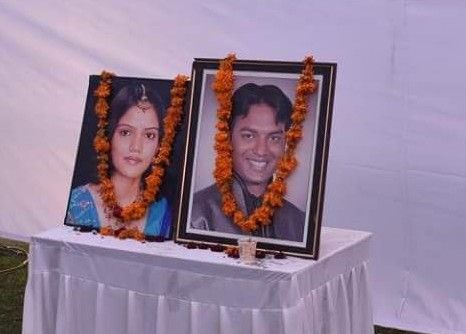 Ankit and Sakshi Bhargava in whose memory the tournament was held

The Ankit Sakshi Bhargava Smriti Sansthan was established by Shri Sunil Bhargava and Smt Asha Bhargava in April 2012 in memory of his daughter and son, Sakshi Bhargava, who passed away on 7 Jan 2008 and Ankit Bhargava on 24 Oct 2011. Ankit was BTech (Computer Engineering) and Sakshi was pursuing BTech 4th Semester in Computer Engineering. They both died in an accident and their parents being chess enthusiasts organising a chess tournament every year since Oct 2008 in their memory. This was the first time the tournament conducted as a rating event. 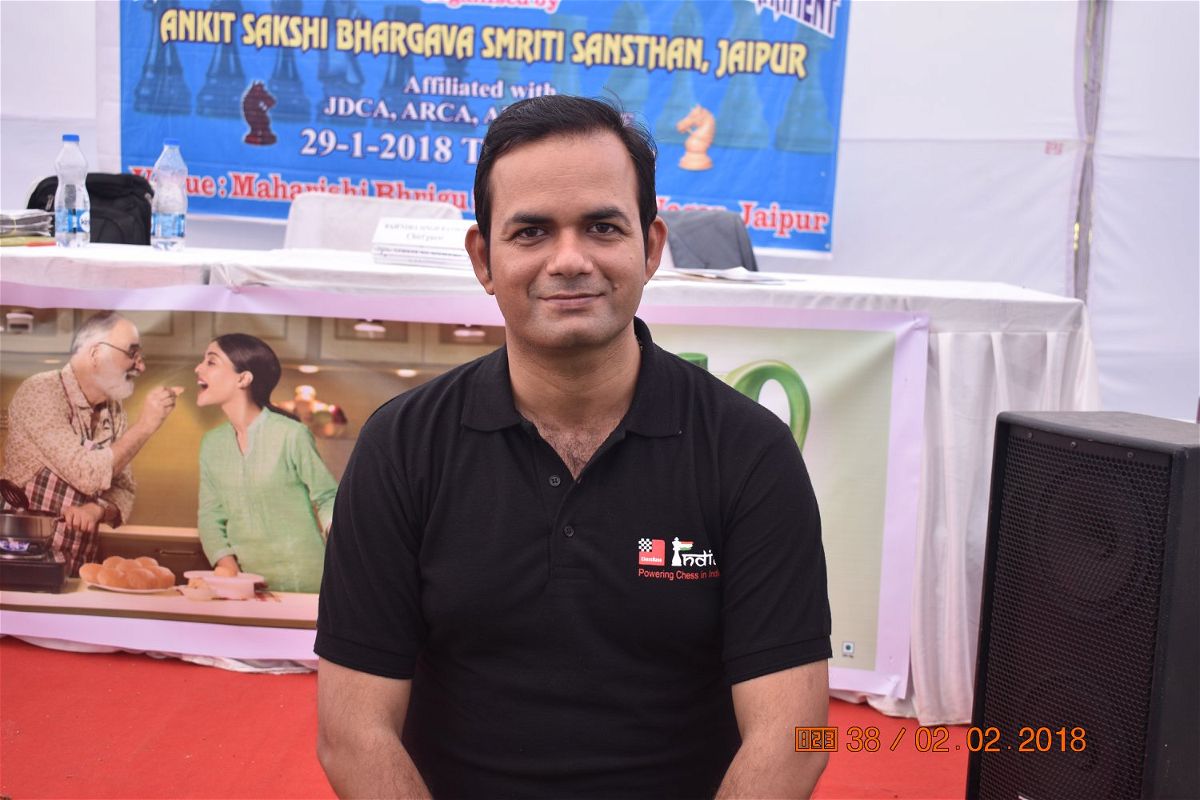 Rishi Kaushik is a passionate chess player (FIDE rating 2008), organizer and lover of the game. He dabbles in every facet of the game which helps to promote chess in the country. He works a Geospatial consultant at Tata Consultancy services!

If you did like Rishi's t-shirt, get your ChessBase India t-shirt now from our shop!