Two points of interest, when one observes the initial round of the Sinquefield Cup at Saint Louis: How tired is everyone? And what has changed at Saint Louis, now that the world champion, Magnus Carlsen has entered the final leg of the Grand Chess Tour? Well after the smoke of the first round was settled it was Mamedyarov and Aronian who came out at the top to lead the event by beating So and Karjakin respectively with the white pieces. World Championship contender Caruana pushed hard against Grischuk for more than 6 hours and felt that the position should have been winning for him but the game ended up in draw. V. Saravanan sends you a detailed report of what took place in the exciting first round of the Sinquefield Cup 2018!

Shakhriyar Mamedyarov scored the first blood when he defeated Wesley So from a well conducted and what turned to be an one sided game on Saturday. When Shakh started the game in typical aggressive fashion, it was not a surprise: 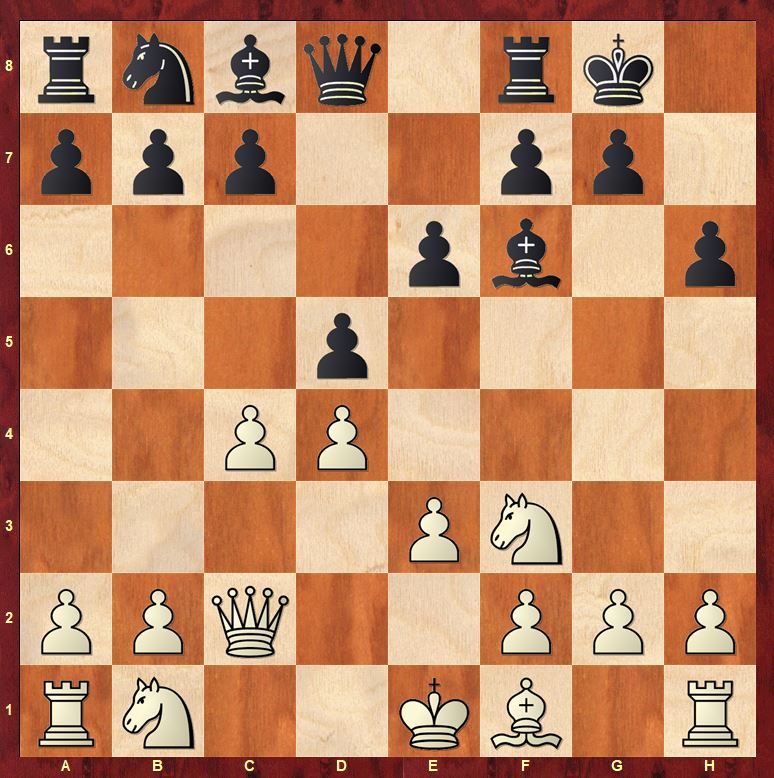 True to his playing style, Shakh continued 8.h4 in his attempt to create a dynamic position, but So seemed to be conducting the game sensibly: 8…g6 9.Nc3 c5 and it looked like a balanced game… 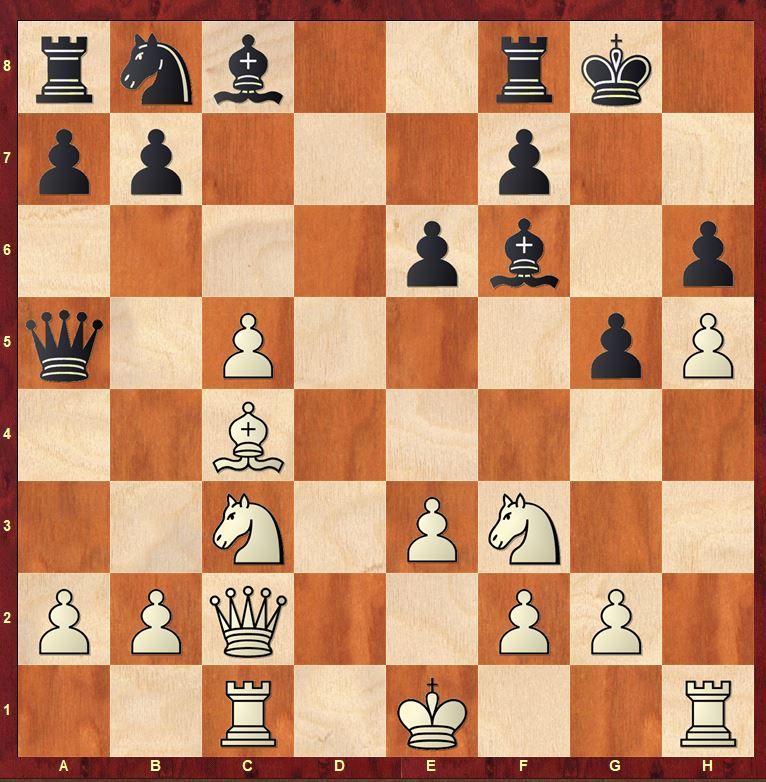 Here, Black could have simply played on with 13…Qxc5. Since White is not going to keep his king on the opposite flank anymore, it is time for Black to stick to his basics and play natural developing moves. After possible moves like 14.Be2 Bg7 15.0-0 Nc6 etc, it will be white who is under pressure: he will miss his dark bishop, and the pawn on h5 may become a liability (or strength?!) in the long run, for which he has a temporary lead in development. It could have been anyone’s game. Instead, if White decides to turn violent, as suggested by Grandmaster Christian Chirila a commentator here, black seems to have adequate defence after 14.Ne4 Qb4 15.Ke2 Bg7 16.Nfg5 (If 16.b3, black can coolly reply with 16…Qe7 guarding against a sacrifice on g5) 16…hxg5 17.h6 Be5 and though the position is extremely messy, but Black should survive.

Then came an ever more bizarre moment: 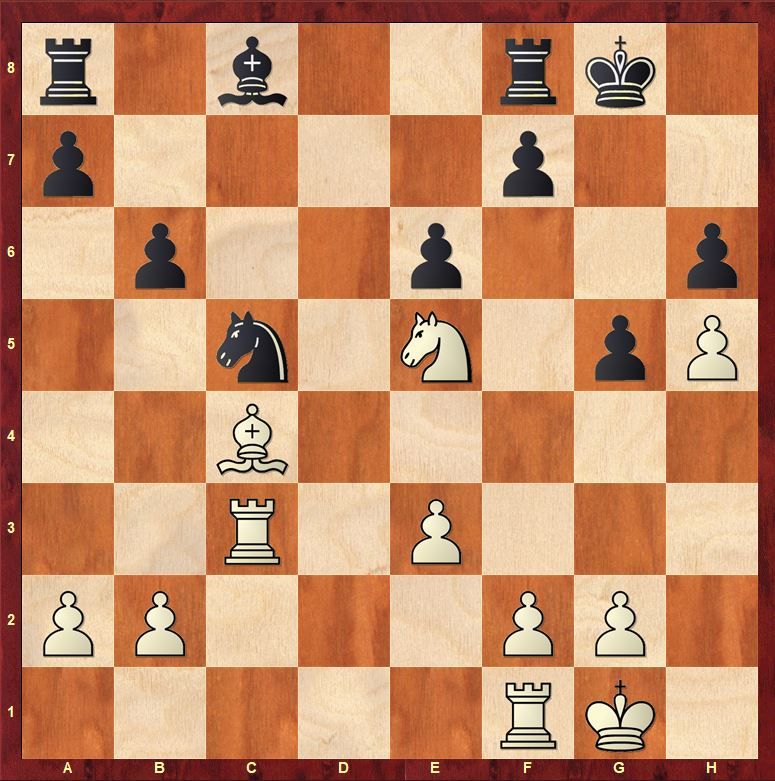 White is definitely doing well, with a strong knight on e5 and having opened up a front with f2-f4. Here, So accepted that he ‘got confused’ here, after calculating 17…Nd7 18.Ng4 Kh7 19.f4 and White is better. But his continuation 17...b6 18.f4 Ne4?! 19.Rd3 Ng3?! seemed to be way below par from the playing abilities the youngster is famous for. Even in the commentary box after the game, So was not able to come up with an explanation for his play.

What could be the reason for So’s extra-cautious approach to the position, (probably) aiming for an exchange of queens rather than complex play? Tiredness? A hangover of gloom from the way he performed in the Saint Louis Rapid & Blitz? In the post-game interview to Maurice Ashley’s difficult question ‘What do need to do to turn things around?’ So answered philosophically, ‘It happens to every chess player…I don’t have much of an option…This is my profession, my career, I have to keep fighting back and come back stronger’.

But on the other end of the spectrum, we had Mamedyarov, who didn’t seem any lesser in energy as he played without any letup and picked up the point. What did he do in the two days between the tournaments? When I asked his second Rauf Mamedov, he answered with clarity and simplicity, “It is important to be in a good mood at the start of this tournament, but we did not do anything unusual. We prepared a little, went for a walk in the park, and rested a lot”. Simple indeed… (‘The Park’ which Rauf refers to is the gigantic 1300 acres of Forest Park opposite to the Chase Park Plaza Royal Sonesta where the players are lodged, a short walk from the Saint Louis Chess Club where the tournament is held). 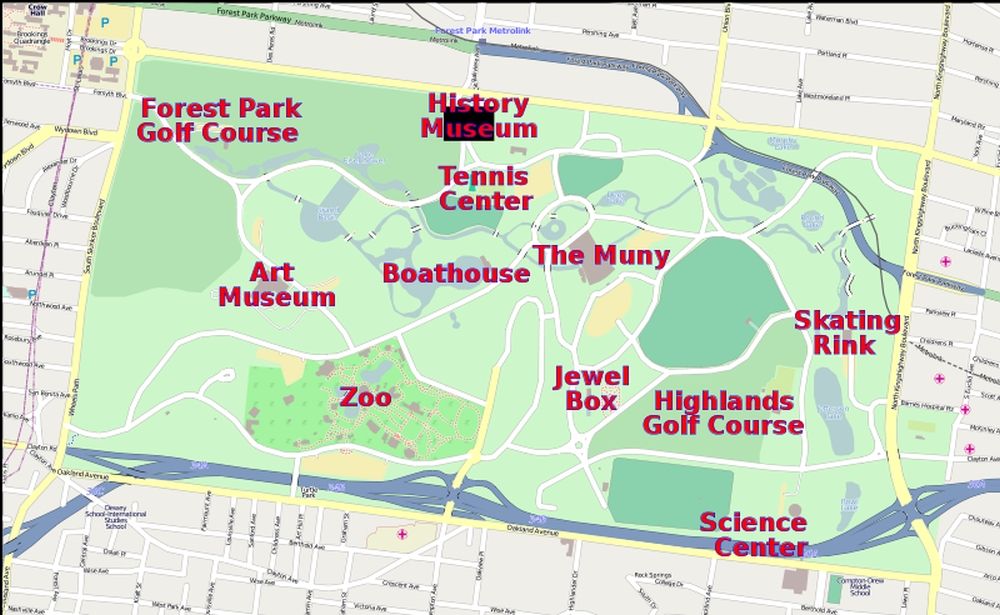 The ‘park’ is not a simple park, as we can see above…| Photo: V.Saravanan 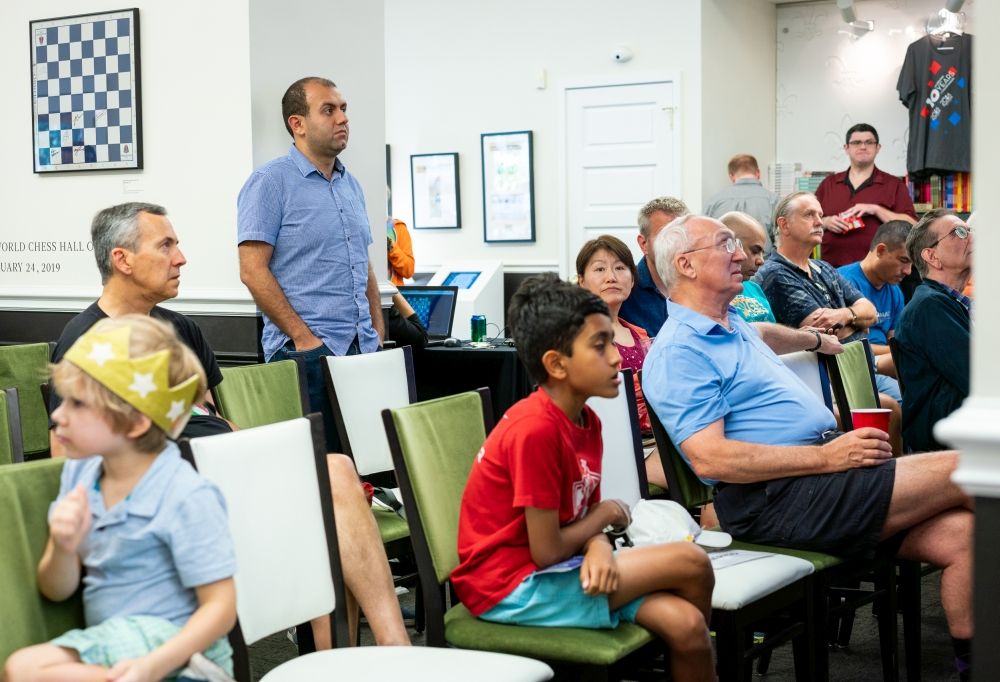 Playing a total of 27 games in a span of 5 days cannot be an easy business even for the best of players in the business. Hence, it was quite interesting to observe body-languages and focus levels of players in this round, the 9 of them who have just finished playing the previous event. It was especially poignant to watch the talented Wesley So, sitting dejected on the board towards the end of his game against Mamedyarov, staring at an inevitable defeat… 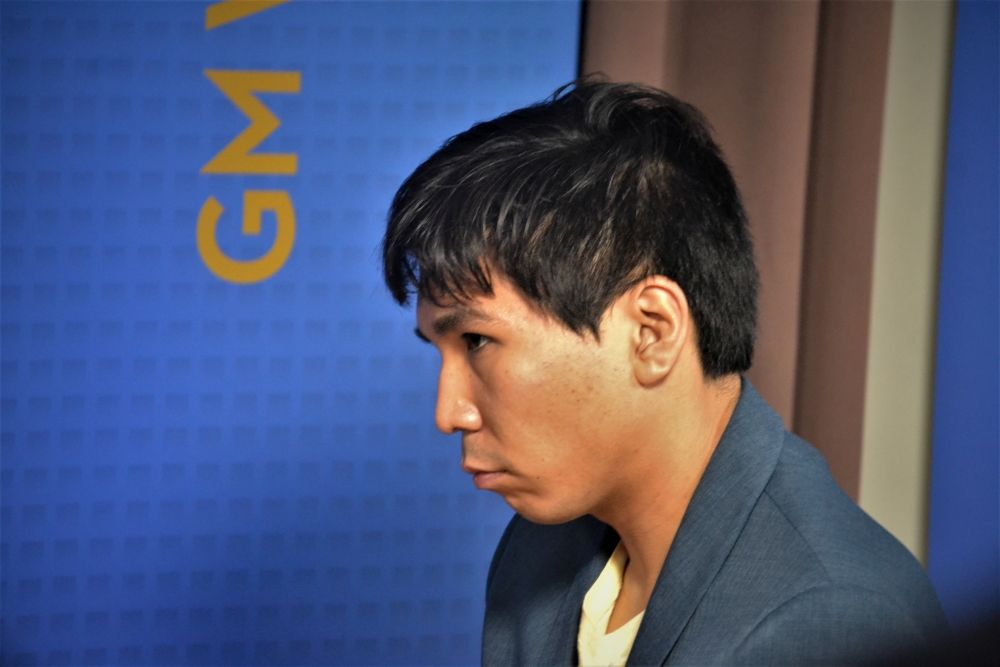 Wesley So, a pained face towards the final stages of his game |Photo – V.Saravanan

But a curious explanation about energy came from the other winner of the round, Levon Aronian, “If you play really badly, then your energy level becomes very low, after a tournament. I am not happy with my play (in the Saint Louis Rapid & Blitz), but I finished 5th – it is not the end of the world. But if you win events, if you (finish at) the top 3 of any event, or if you play well, your energy levels go up, you are more motivated, generally. It is kind of a strange thing, energy, it is always very random, with people…” Excellent!

And did he do anything special, in the intervening two days, keeping this ‘energy’ thing in mind? “I went to the Saxaphone Museum! It was very exciting – I saw some great instruments. That’s what I did!” Disbelieving, I ask him, ‘This is not one of your jokes, right?!’ “No! I’m serious!” 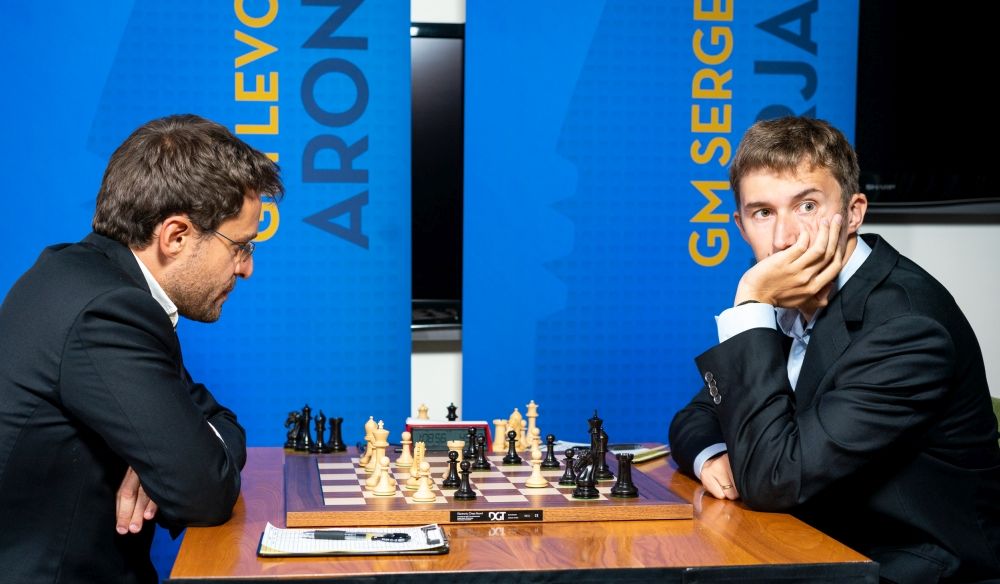 But for the puritans of the game, the beginning of the encounter itself brought-in its share of tiredness and groans! You see, it was a game arising out of the Berlin defence of the Ruy Lopez. And then, we had the chief arbiter tweeting with curious words, as soon as the game entered its traditional endgame positions: 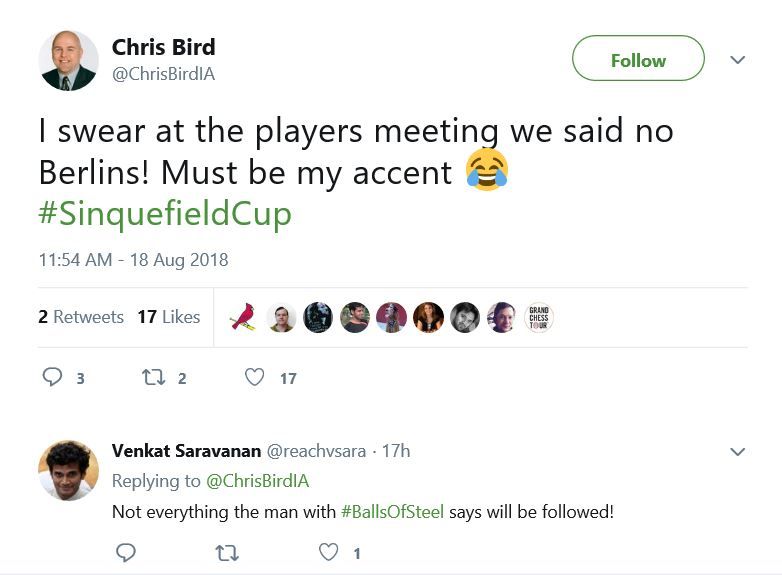 Chris Bird is that famous British arbiter who earned the tough guy nickname when he made Kasparov and Anand play out the minimum number of moves before they agreed for a draw last year.

But brushing aside such stereotypes, Aronian went on to score a clinical victory against Karjakin, whose style suits the Berlin wall perfectly. How does Aronian play again and again against the Berlin, an opening which occurs often at the top level? And does he go to the armed with specific moves? Aronian looks at me with pride and says, ”Berlin is a kind of an opening where you are going to maneuver a lot – with white and black. So there are no clear (places) for your pieces. It is a very very difficult opening to play, so I enjoy playing it with both colours – there is a lot to learn about chess from that opening, just that opening alone! I know what (setup) I would like to get. I try to come up with (a) setup which I like to get. When he played …g5 today, I knew my plans.” So you are not tired of it, yet? “No, No! The endgame is very exciting I think!”

Fantastic words from a class player! And how did he really translate it into play today? 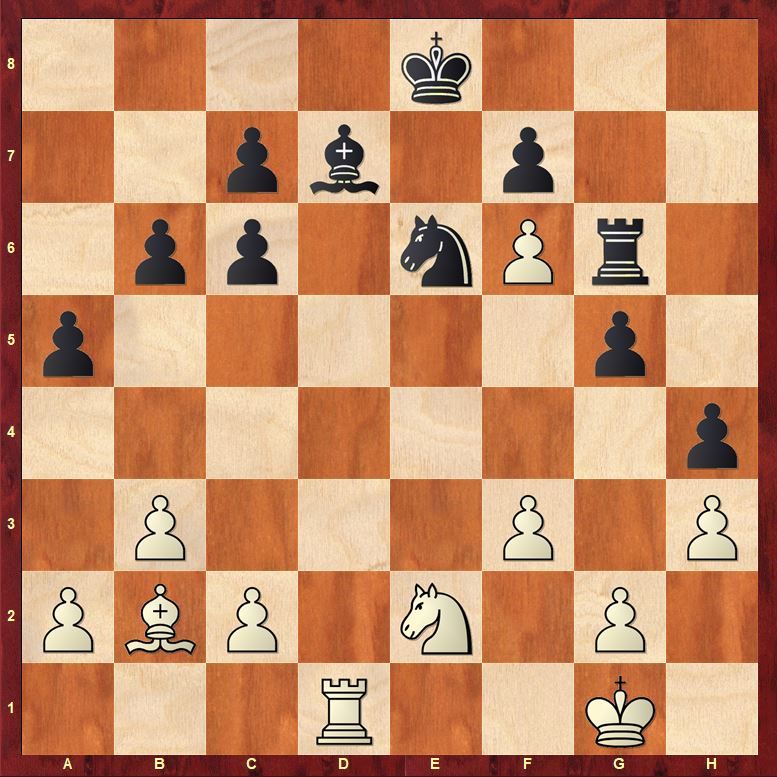 Aronian opined that he was quite happy with his play till this point. Which means that, this was the ‘setup’ that Aronian was talking about, which he was aiming for. 33.Nc1 - Aronian was not happy with this move, probably feeling that 33.Kf2 or 33.Be5 could have been better moves, but Sergey’s handling of the position wasn’t perfect either… 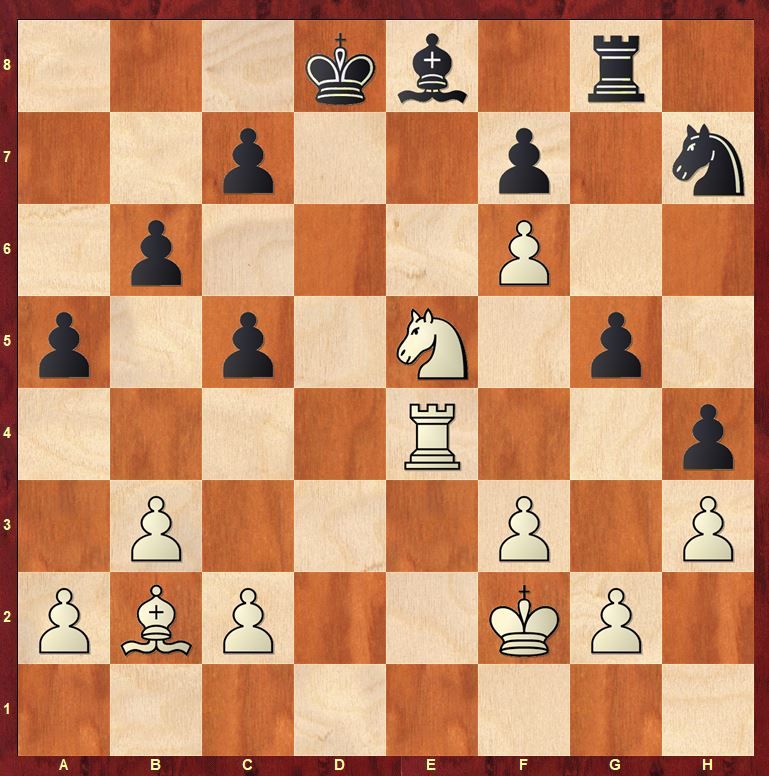 41.f4! and white is clearly better. One must say, Aronian definitely understands his setups. And finishing off, Aronian played accurately in a tricky looking endgame: 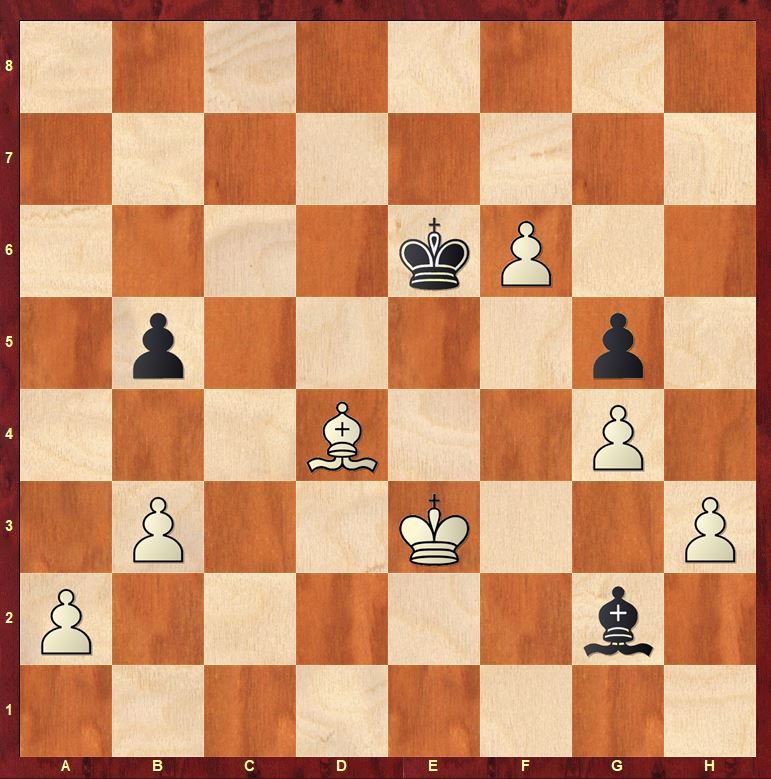 And here’s the right time to remember the words of Garry Kasparov: 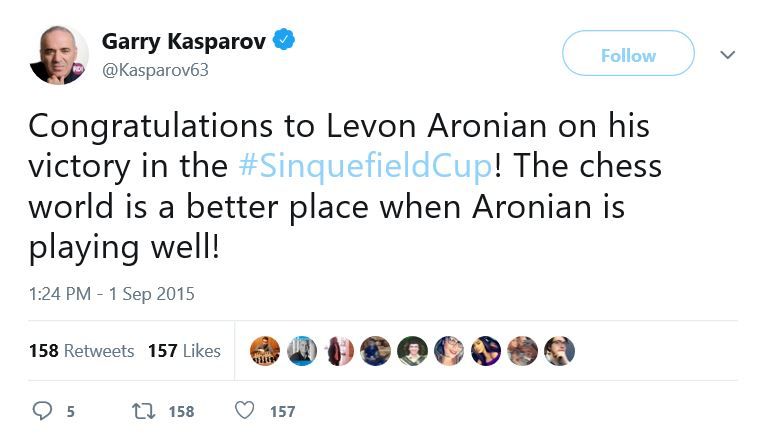 Vishy Anand was strangely not troubled by Nakamura, from the black side of a Queens Gambit Declined, today, even though it was Hikaru who came up with a new move out of the opening: 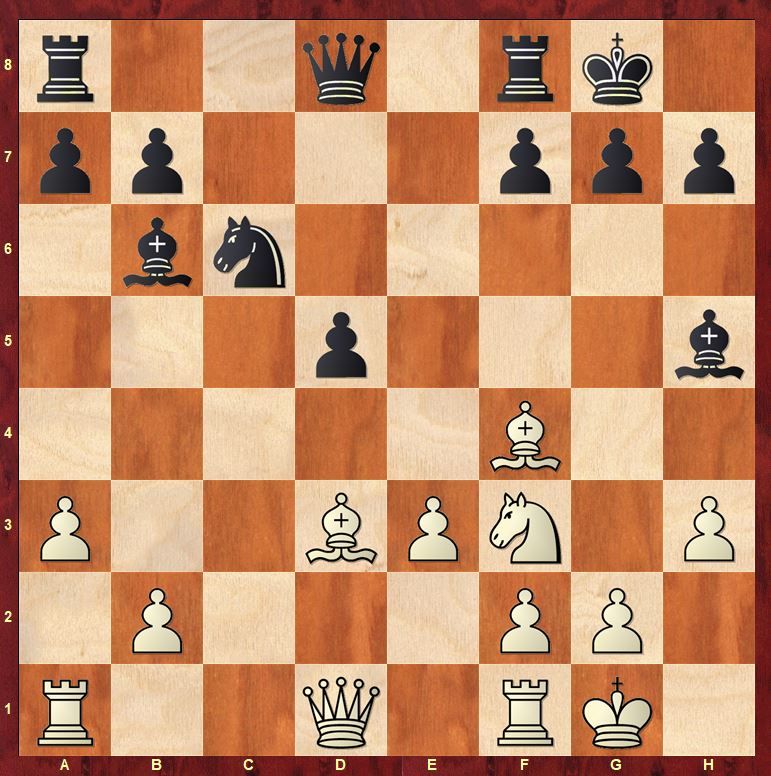 Making one of his rare visits to the confession booth, Anand admitted, ‘I had not really expected Hikaru’s Bb5. In fact, I have not seen it before. I found it very difficult to respond to the position’. 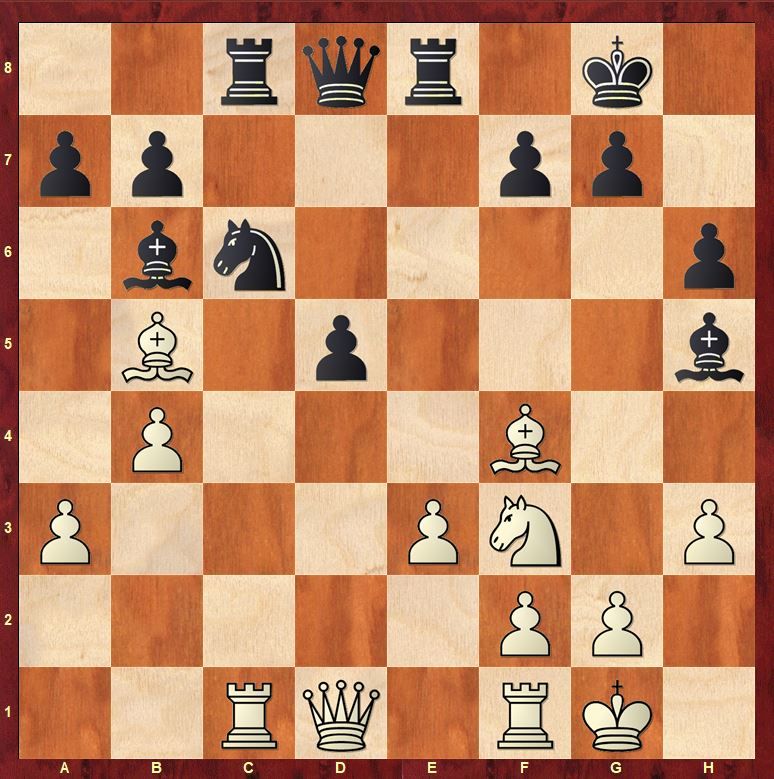 “When he allowed this Bxd3 and Ne5 I thought it took some pressure off. I think he still should have taken on e5, rather than allow me to take on d3 and play d4. Hopefully, with this move d4 I have solved my problems and things are kind of ok!” said Anand during the game itself.

Which brings us to the guy who is the freshest and the highest rated played of the tournament, who came up with the tweet about his visit to the St Louis Zoo before the start of the tournament: 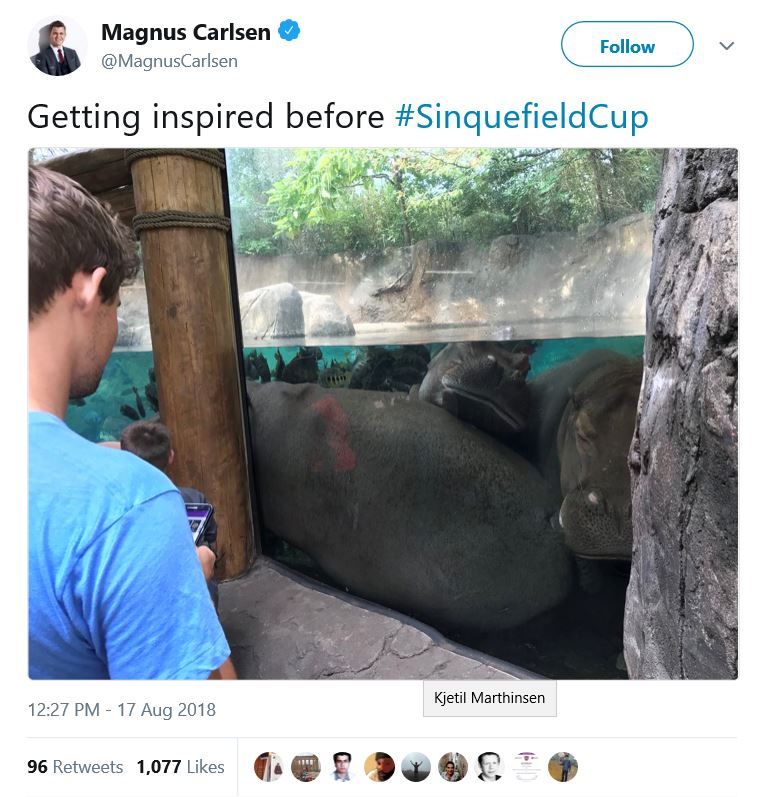 Source of Inspiration of the man who inspired millions and counting! | Photo: Twitter

He had started an even more interesting stuff before the start of the tournament itself. During the opening ceremony, he got into a trash-talking banter with Fabiano Caruana which instantly energized everyone watching the tournament:

Maurice Ashley: “Does a victory here mean anything to you?”

Magnus Carlsen:  “Not to me, but Fabi needs to win this tournament to get to London! (laughter and hoots!)…to be in the Grand Chess Tour final, not the world championship final!

Fabiano Caruana: “In the last few months generally I have won the tournaments Magnus has been playing!”

Carlsen: “I didn’t mean to trashtalk - I just meant to state something factual!”

As we say, we were entertained! 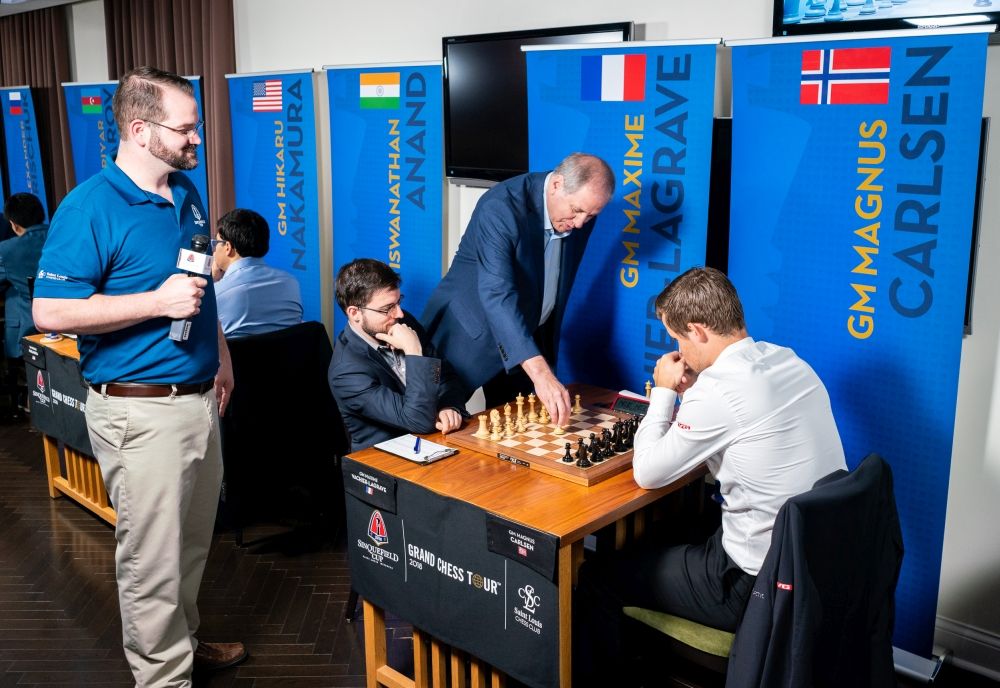 Vachier seemed to be dominating Carlsen at some point, getting the capacity crowd excited… 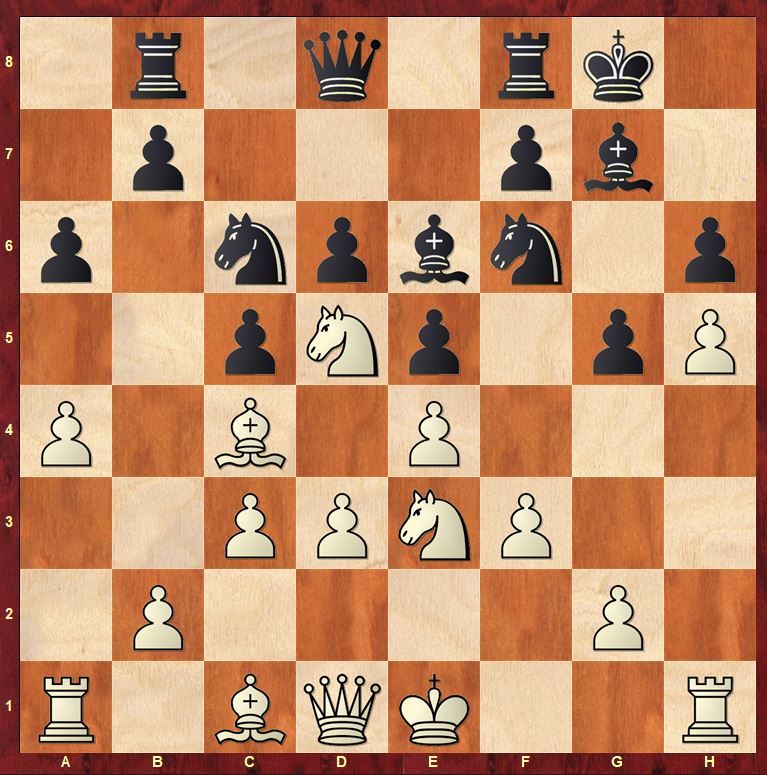 The last game to end was the challenger’s long grind against Grischuk, where he seemed to be holding an edge for a long time: 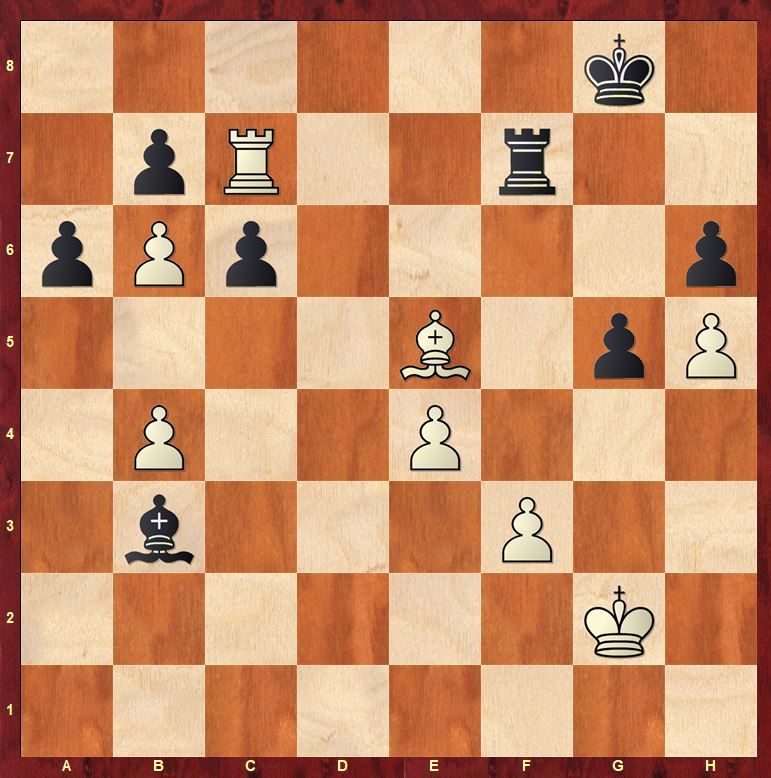 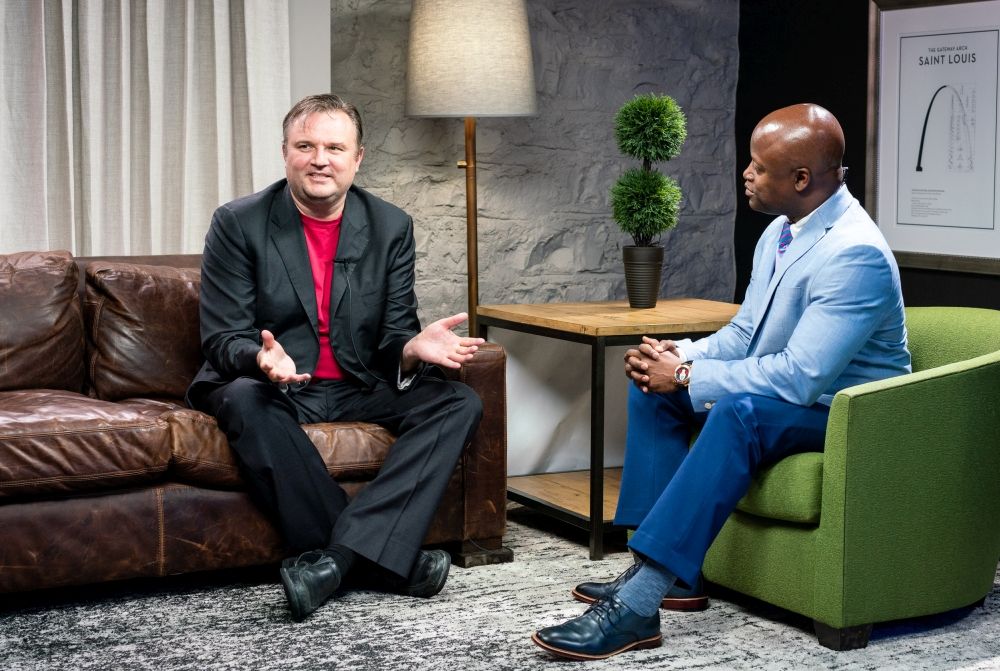 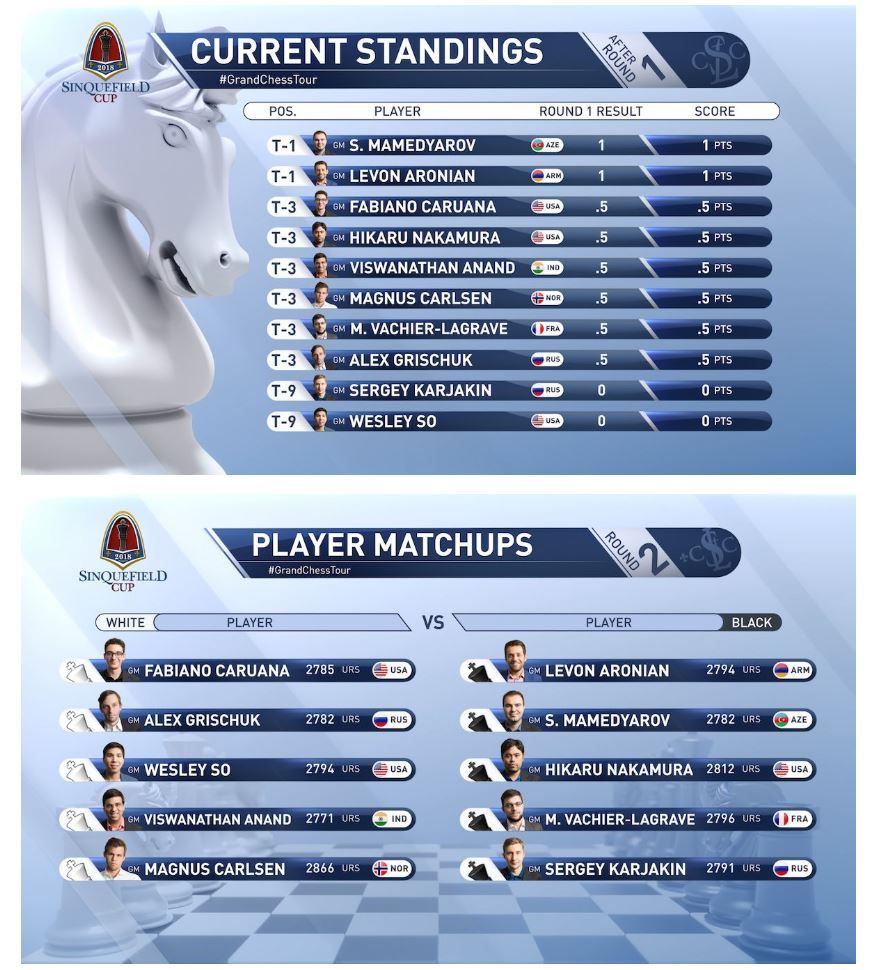