A one day chess festival was organised in Hyderabad by Simply Chess Foundation where Arjuna Awardee IM D.V. Prasad gave simultaneous and blindfold exhibition matches. The event took place on 4th August 2018 at Hotel Amanthran, Hyderabad, and was completely free of cost for all players. Below is a report on all the happenings of the day, sent to us by Ravi Kandi.

A day full of learning!

An introductory speech by DV Prasad before starting the Simul | Photo: Ravi Kandi

The event was organised by the Simply Chess Foundation and Telugu Rated Players Group (TRPG), Hyderabad at the beautiful and spacious hall of Hotel Amanthran which was also the main sponsor of the event. The motive behind the event was to encourage Telangana chess players to improve their chess skills free of cost and bring more laurels to the State. 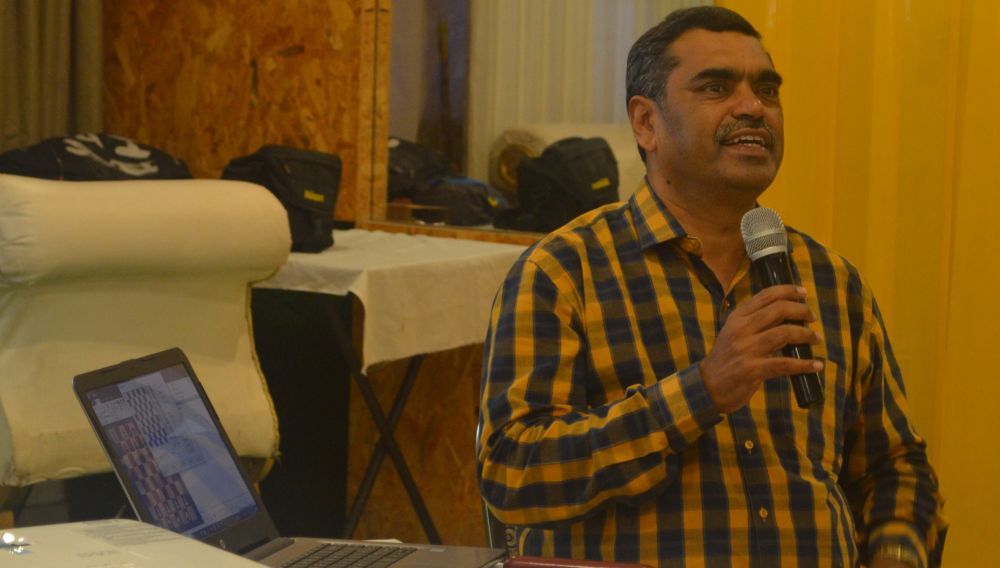 IM D.V Prasad flew all the way from Mumbai to support this great cause and promote chess in Telangana, he played 32 simultaneous games with players of different age groups (10-70 years) with a final score of 23 wins, 8 draws and a loss.

Gowri Shankar of IIMC College was the only player who managed to win against IM D.V. Prasad. You can play through the game below: 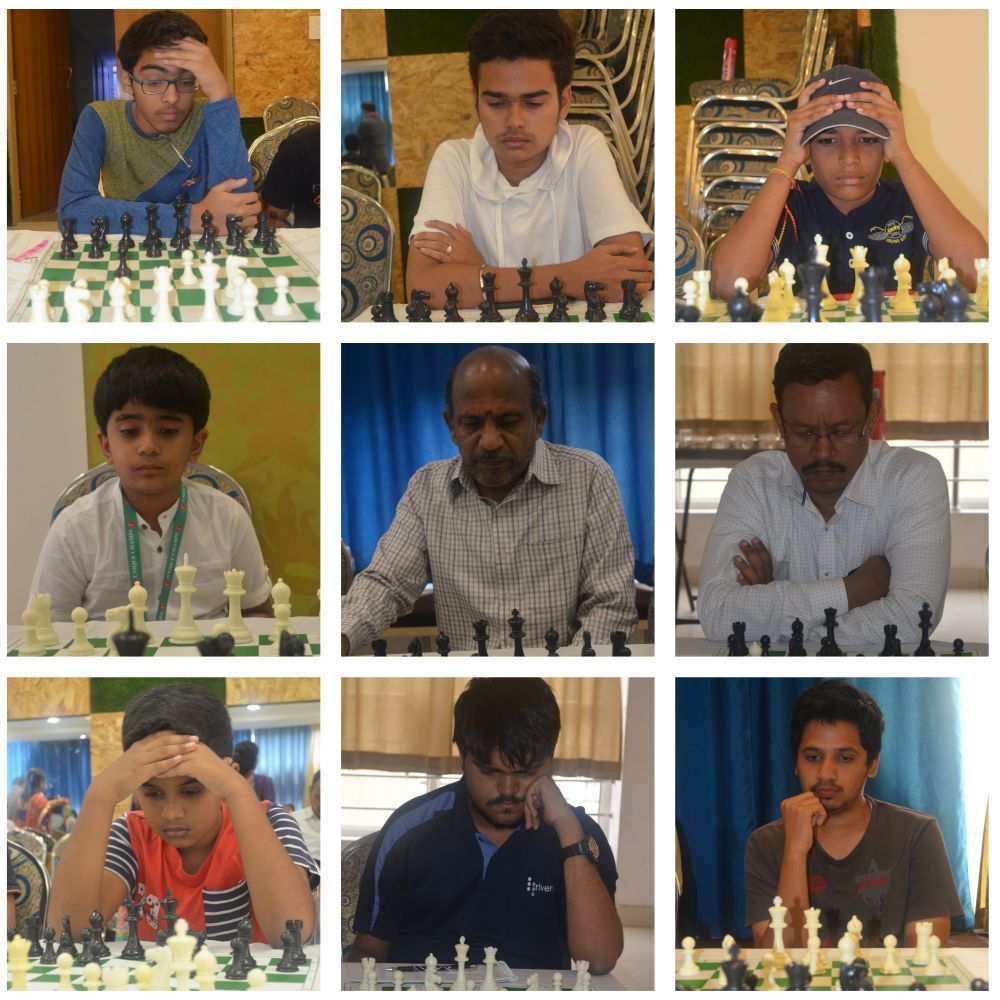 After the Simul exhibition, Sri D.V.Prasad spent multiple hours with the players sharing his knowledge on how to improve at chess. He was very impressed with the level of competence shown by Telangana players and promised to come back to Hyderabad to support and encourage local talent in coming days. 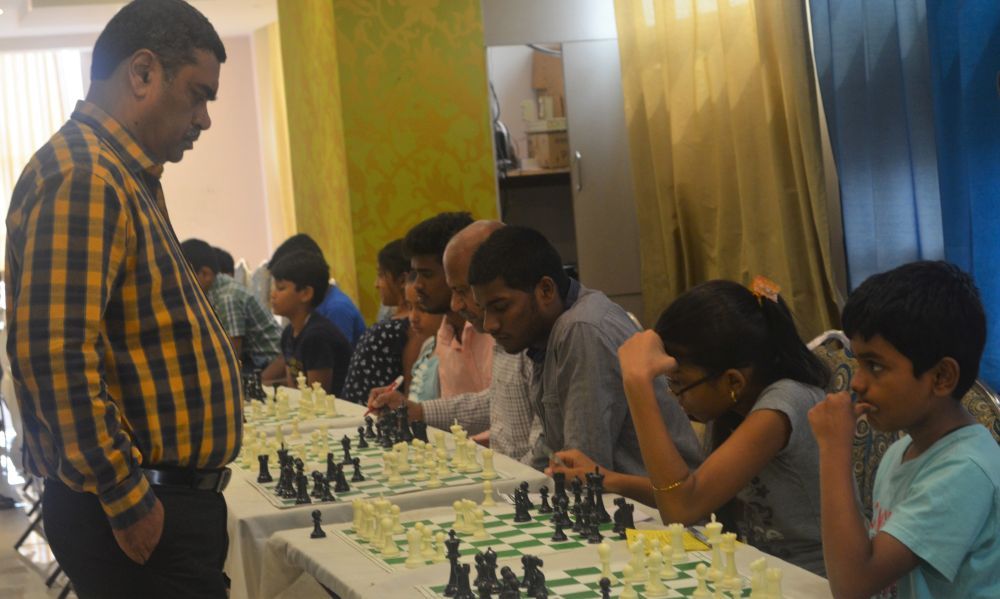 Prasad completed his IM title in 1986 at the Commonwealth championship in London, which he won | Photo: Ravi Kandi

Later, Shri D.V Prasad gave a lecture on different aspects of the game of chess. Some of the major topics included: trying to calculate beyond the source,  how to play positionally and verifying variations while defending (searching for defensive resources).  He suggested the book “ Planning the game” by Younous to the young kids which develops the proper planning method in their chess thinking.  He also suggested to study the games of former world champions particularly Alekhine, Fisher, Tal and Kasparov for dynamic aspect of the game.  He strongly advocates studying classics will improve one’s chess standard.

The parents' interaction was the final session of the program. Prasad answered many doubts raised by the parents about chess in India, opting chess as a career, balancing the studies and chess, how much time we should allocate to practice the chess, coaching, books, and the use of computers.  He strongly suggested that after finishing of every game a self analysis of the complete game with comments and human analysis either by strong player/coach is required to improve the game. 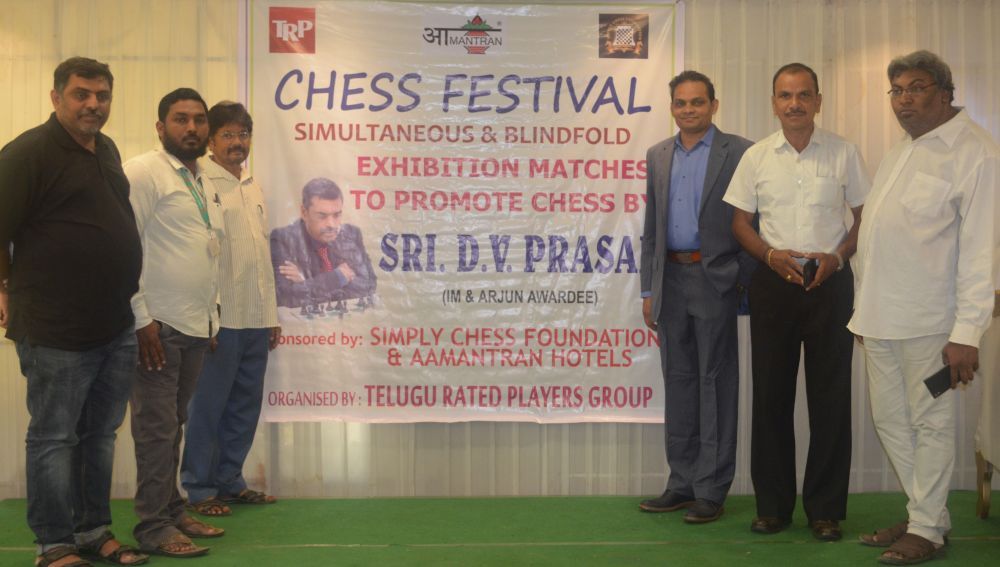 The minds behind the success of this program in one frame | Photo: Ravi Kandi

The overall session was very lively conducted by the Simply Chess Foundation (SCF). An organisation founded by the Chess Lovers of Hyderabad which is headed by Sri. Kotha Surya in 2017 Feb. The other prominent members of this group are senior players Sri. Kandi Ramu, Sri AmithPal Singh, Sri Raja Sekhar etc., This organisation conducted several non-profitable tournaments and coaching camps to improve the awareness of chess in and around the city of Hyderabad. 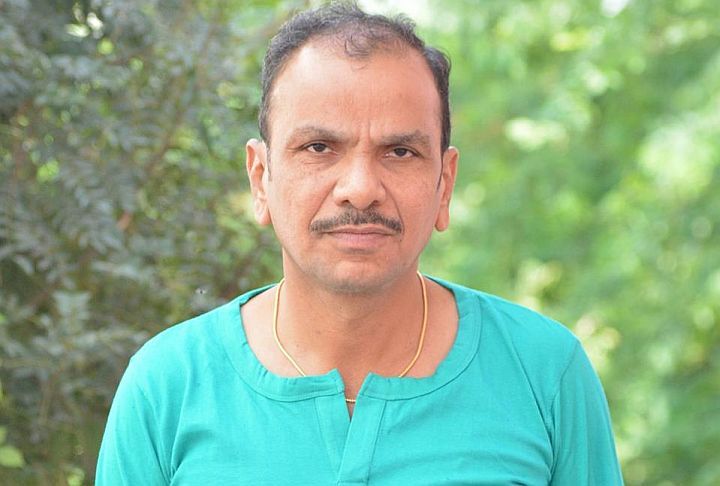 Ravi Kandi is an employee of the South Central Railways by profession and a chess player by passion. He is one of the founding members of the Simply Chess Foundation, a non-profit organisation formed to promote, develop and give back to chess. He is also a senior National Arbiter and the founder/owner of the Rank Chess Academy in Hyderabad, India