V. Saravanan is a strong chess player, an eloquent speaker and also a fine chess coach. He was also the commentator at the World Junior Championship 2014 and a journalist for many eminent tournaments like the World Championship 2012 and the Sinquefield Cup 2017 and 2018. However, there is one video which made the world see a completely different side of him. On 24th of January 2018 we released a video of Saravanan entitled "Must read books to become a better chess player". It was a one-hour video where the Chennai IM spoke about some of his favourite books of chess. The video became very popular and had over 32,000 views on our YouTube Channel. Now Saravanan is back, this time with part II of his "Must read books to become a better chess player" and this will be premiered LIVE on 11th of December 2018 at 8.30 p.m. Find out more.

On 24th of January 2018, when the Chennai Open was in progress IM V. Saravanan invited Amruta and me to his home for dinner. I have been to Saravanan's house before and our usual ritual is to sit in his study room and check out some of his favourite books he has in his library. As Sara (his friends call him that) started to passionately show me one book after another, I realized that this knowledge is something that should not be limited inside the four walls of that room. I asked Saravanan if we could do a video recording of the books that he was showing so that I could upload it on the ChessBase India YouTube channel for the world to see at large. Not really shy of the camera, Sara instantly agreed. We had our dinner and then started our "little book session!" 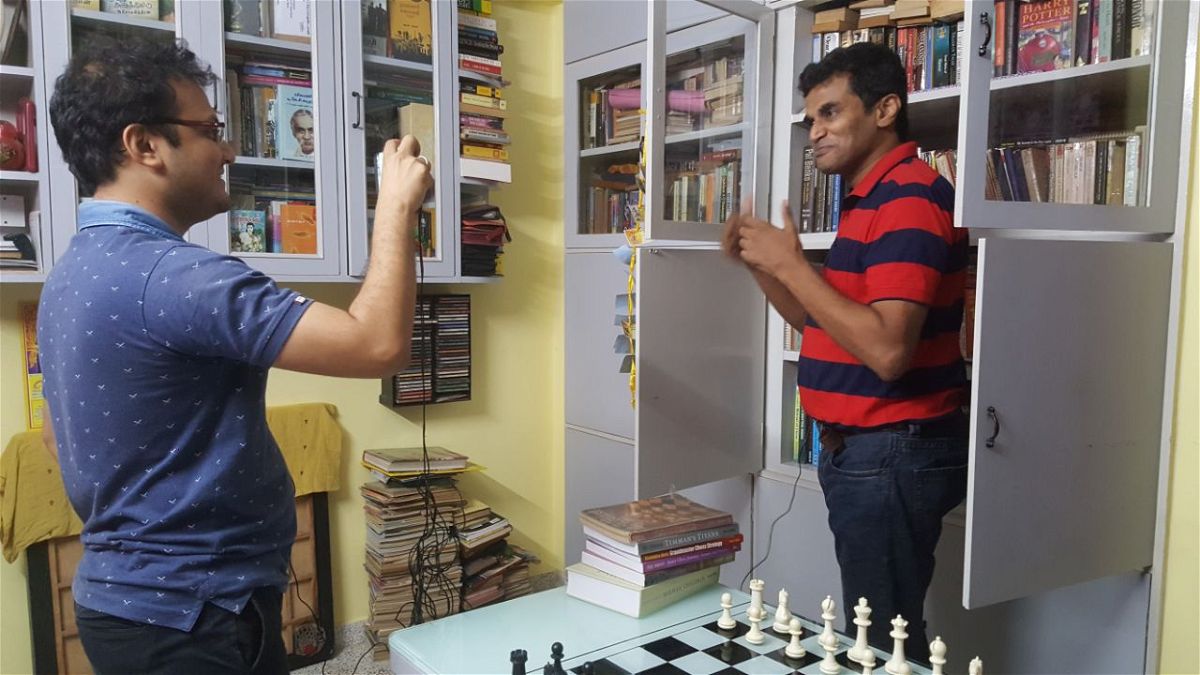 One hour simply flew by. Back home when I was uploading the video I realized that one hour long videos on YouTube don't really work. But I had enjoyed my time with Saravanan and had learnt a lot. I decided to upload it without any real editing.

The video was entitled "Must Read Books to become a better chess player!"

After a few days when I opened the video, to my surprise the view count was growing rapidly! But more than that I was seeing comments like the following:

- I enjoyed every minute of the interview! i hope he makes his own channel and do book reviews of old (classics) and new books.﻿ - Alvin Alcala

- I don’t know how many times I’ve watched this. It’s therapeutic in a sense.﻿ - Mvjs27

- This is such an interesting interview. IM Saravanan is an engaging personality. I have watched the entire clip several times. I find the comments about improving by playing game collections vs targeted training to be enlightening. - John Brosnan

- Great interview with a chess scholar who has a lot of interesting things to say, really enjoyed it and a couple of books that I hadn't considered before!﻿﻿ - Alon Byron

- This interview by IM.. Saravanan is amazing. I love the way this guy goes about his business... Fantastic!﻿ - Arulkumar Natarajan

These are just a few of the comments. There were many more. The video climbed to a view count of 32,000+. Saravanan's smooth erudition combined with his excellent knowledge and reading habits makes him a fantastic presenter.

It was clear to me that if there was one thing that I must repeat in the one year nomadic journey it has to be a visit to Saravanan's house and do another video with him on the books. After the Tata Steel India 2018 ended Amruta and I flew down to Chennai and on 27th November, which was the last day of our 365 day journey we did two very important things. First we visited Vishy Anand's home in Kotturpuram for an interview about the Carlsen-Caruana match. (This video has crossed 100k views - 102619 to be precise!). The funny thing is that we hadn't booked our flight tickets back from Chennai to Mumbai yet, because our next stop was at Saravanan's place in Anna Nagar to record the part II of "Must Read Books to become a better chess player".

Saravanan was eating his lunch but already thinking about the books he was going to speak about in the video!

Saravanan reads the comments of his fans and critics very carefully. He told me before the video,"Last time someone had complained that I spent a lot of time bringing out the books from my cupboard. So this time I will keep them ready!"

And then we began! Saravanan went over one book after another. The video went on for one hour 43 minutes! I enjoyed thoroughly each and every book shown by Sara. Some of them I had never seen before, some of them I didn't know were so good. It was like a training session where I asked him my doubts about various books and training techniques and he tried to explain and clarify in the best way he could. After the video ended, we booked our flight tickets to Mumbai, thoroughly satisfied at having done two amazing videos on the same day!

We went over more than 50 chess books, Saravanan giving his view about whether he likes them or not!

Before leaving we did spend some time playing a very interesting game with Saravanan and his son Nandan!

That's Dog and the Bone, a very nice strategy game. We were blown away by the seven-year-old Nandan who strategised to perfection and beat us all! 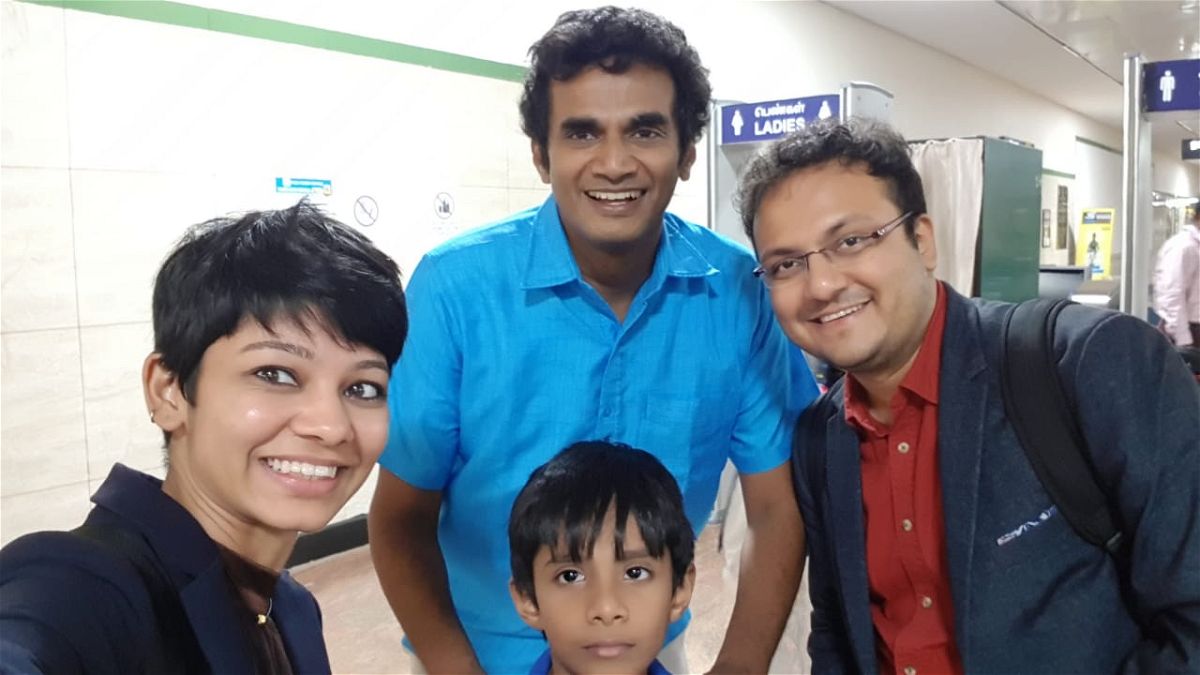 Back in the ChessBase India office in Mumbai, I opened the video to check if I needed to edit something. The more I looked at the video, the more I realized that I just didn't have to cut anything. I kept the video as it is, as that gives the viewers the exact experience of standing inside Saravanan's study room and seeing the books with him. The video was uploaded on YouTube. But instead of pressing the publish button, we decided to use the new feature that YouTube has introduced called "Premiere"!

The idea is that you can decide the date and time when you want the video to be premiered and the viewers can watch it for the very first time like a premiere of a new movie release! But what is the difference between this and viewing it after say a couple of days? Well, while the video is in progress the viewers can chat with the creators of the video in real time. And so I asked Saravanan for his time and he agreed to 8.30 p.m. on 11th of December 2018! That being the birthday of Vishy Anand, Saravanan's favourite, made our task of choosing the date easier!

So, today (11th December) at 8.30 p.m. the "Must Read Books to become a better chess player - Part II" will be premiered at 8.30 p.m. IST. Saravanan will be available for real time chatting and you can ask him any questions that you have on your mind. I too will be present as ChessBase India during the show.

The video will begin at 8.30 p.m. above, but in case you would like to chat with Saravanan, then you need to go to this link:

So grab your popcorn and be there to watch the very interesting Premiere of Saravanan talking about his favourite books. Do s hare the above link with your friends!