24-year old Sanjib Mali from Kolkata, West Bengal won ₹151000 in 2nd DCA Below 1600 FIDE Rated Chess Championship 2017. This is the biggest prize he has won in his lifetime. Sanjib did not even expect to win the tournament when he went to play there. How did he win the tournament in today's era without even using a computer for his preparation, what are his thoughts about such a huge prize money in a below 1600 event and much more. Usually we have interviews of national champions and grandmasters who win important events, but Shahid Ahmed's interview of Sanjib Mali brings out the completely unexplored side of the life of an amateur chess player. Photos: Delhi Chess 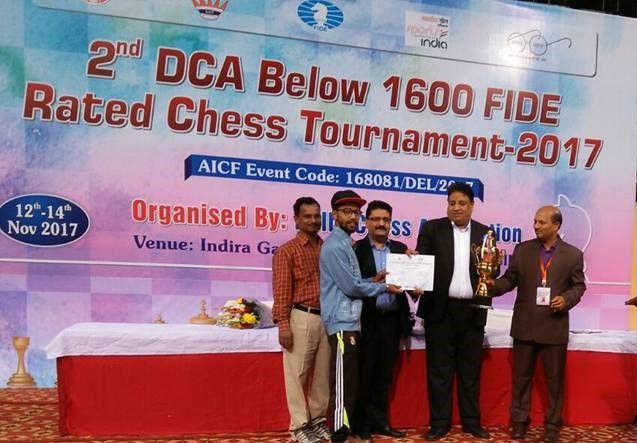 Sanjib started well with a double hat-trick of wins and had four-way lead after the sixth round. He drew in the seventh round and slipped to second position. He got into the title picture after winning his eighth round and became the sole leader of the tournament. A win in the last round would have guaranteed him the championship. He was confident that his tie-break score is much higher than the players who were trailing behind by half a point. So he decided to settle for a draw in the last round. He was right and he did become the champion and took home a glittering trophy and one and a half lakh rupees. Let us see his best game from the tournament, annotated by him.

Here is a short interview with Sanjib Mali about what was going through his mind during the last round, how he calculated his way towards championship, his opinion about such a high prize money in a Below 1600 tournament and many more.

Sanjib Mali (SM): First time I became a champion in a tournament of this magnitude. I am very happy about it. Informed everyone I know, everybody congratulated me.

SA: What was going through your mind before playing the last round?

SA: Since you said that you were playing for a draw in the last round, were you sure about your championship if you drew in the final round?

SM: Yes, because I was leading by half a point and my Buchholz was much more than the rest.

SA: So it was a calculated decision. How were you feeling when the draw offer was refused?

SM: I was quite tensed at that time. After blundering the pawn, I went to the washroom to freshen up. Then I returned to the board and for five minutes I kept my head down at my table, removed everything from my head and fully concentrated on the game which eventually led to a draw.

SA: What is your parents reaction upon hearing about your triumph?

SM: They are absolutely delighted. They distributed sweets to everyone they know and they told me to continue improving my game. They inspire me a lot.

SA:  Whom will you give maximum credit for your championship?

SM: My coach and my practice partner, Samir Dhar and Sandip Dey respectively. They have helped me in everything.

SA: What are you planning to do with 1.5 lacs prize money?

SM: I give all my prize money to my dad. Now I will get a laptop to improve my game.

SA: What do you think about Below 1600 tournaments having such a high prize money?

SM: I think both it should be such and it should not be too. Huge prize money will definitely help the players. However, in tournaments where a GM is winning a prize money worth 2 lacs and a below 1600 player is also winning the same prize money, it feels bad as a player. In my opinion, below 1600 tournament should have a maximum of 1 lac as their first prize.

SA: What do you do now apart from chess?

SA: What are your ambitions for chess?

SM: I have a lot of desire for chess but have not received that much of help so far.

SA: I wish you all the best in your future endeavors.

SM: Let’s see. I will be delighted wherever chess takes me. 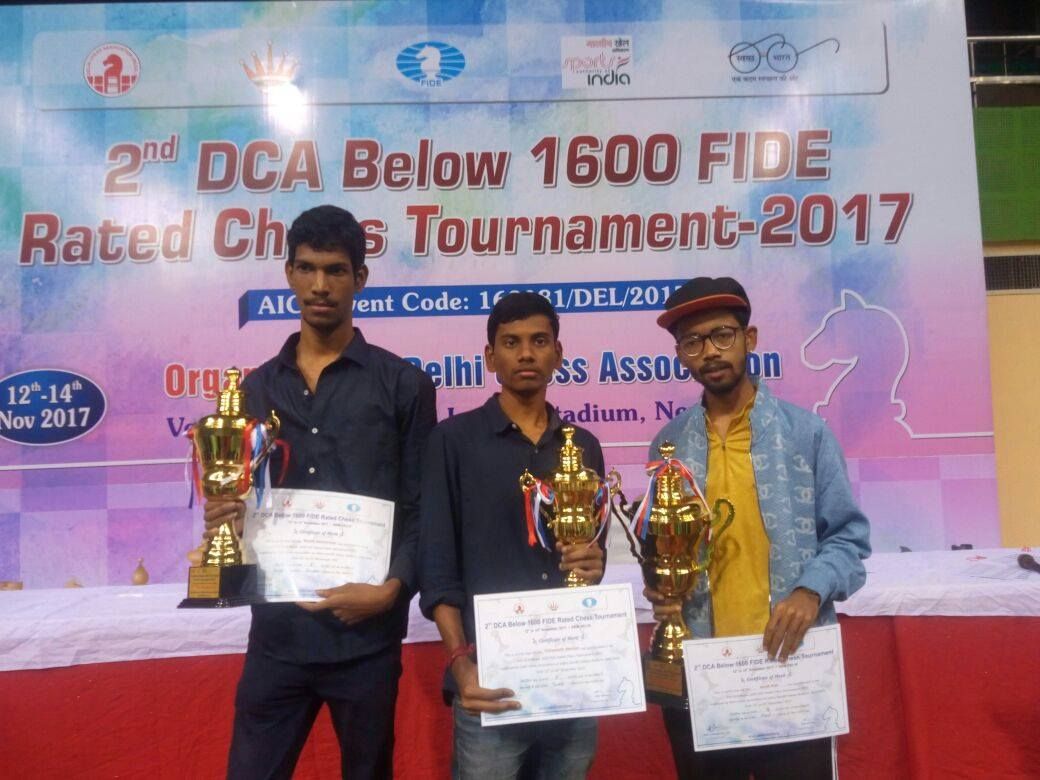 It was a close fight until the end which resulted in four players finishing at 8 points after the completion of ninth round. Sanjib Mali of West Bengal became champion due to the best tie-break score. Ranjith Kalaiyarasan of Puducherry was placed second, Vishwanath Kannam of Andhra Pradesh third and 11-year-old Harshit Pawar was adjudged at the fourth position. Manabi Chouhan of West Bengal was declared as the best female player while Rohit Dhall of Delhi was announced as the best among unrated players.

The tournament was conducted from 12th to 14th November 2017 at Indira Gandhi Stadium in New Delhi. Around 535 players participated across 20 different states of India.