Fabiano Caruana is showing why he is the worthy person to challenge the World Champion Magnus Carlsen. Fabi started off with three wins out of three games at the Saint Louis Rapid 2018. Among the casualties were Grischuk, Aronian and Mamedyarov. Vishy Anand had a mixed day at the office. He beat Hikaru Nakamura in game one, but lost to MVL in the second round. Vishy drew his third against Karjakin. There was a lot of interesting chess played in the day. One of them being Karjakin's thoroughly creative victory over Leinier Dominguez. In this day one report from Saint Louis, ChessBase India correspondent V. Saravanan sends you a detailed picture of what took place. 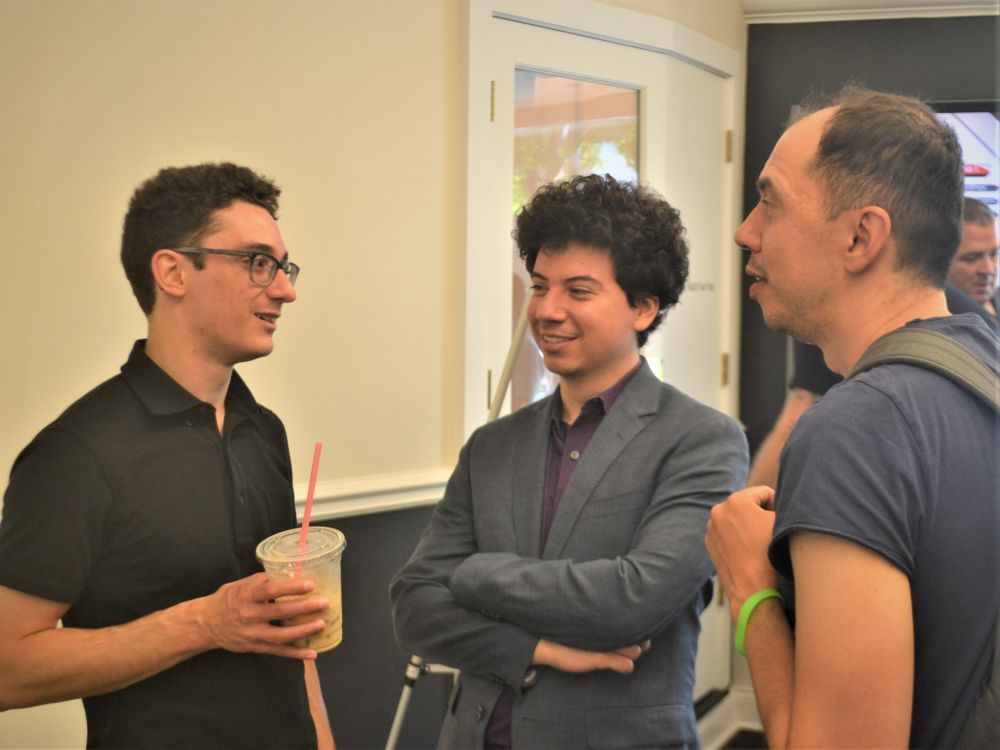 It was just before the beginning of the 3rd round at the Saint Louis Rapid and Blitz tournament and it looked a scene out of ordinary. A relaxed Fabiano Caruana was found having a chat with Rustam Kasimdzhanov, his second and Alejandro Ramirez from the commentary team at the ground floor lobby of the club. He looked oblivious to the brilliant victory he had scored in the 2nd round and seemingly relaxed about the upcoming 3rd round where he was scheduled to play Mamedyarov who had scored a crushing win in the first round against So Wesley and had almost defeated Alexander Grischuk in the 2nd round.

During the Inauguration Ceremony of the Saint Louis Rapid & Blitz tournament on Friday, when asked for the best advice he could give Fabiano Caruana to defeat Magnus Carlsen in the upcoming World Championship match in November 2018, Levon Aronian urged him to play ‘interesting, original (and) sharp lines’ for a victory in the match. Within 24 hours, he was facing the very magic that he had recommended to Caruana trained on his own self: 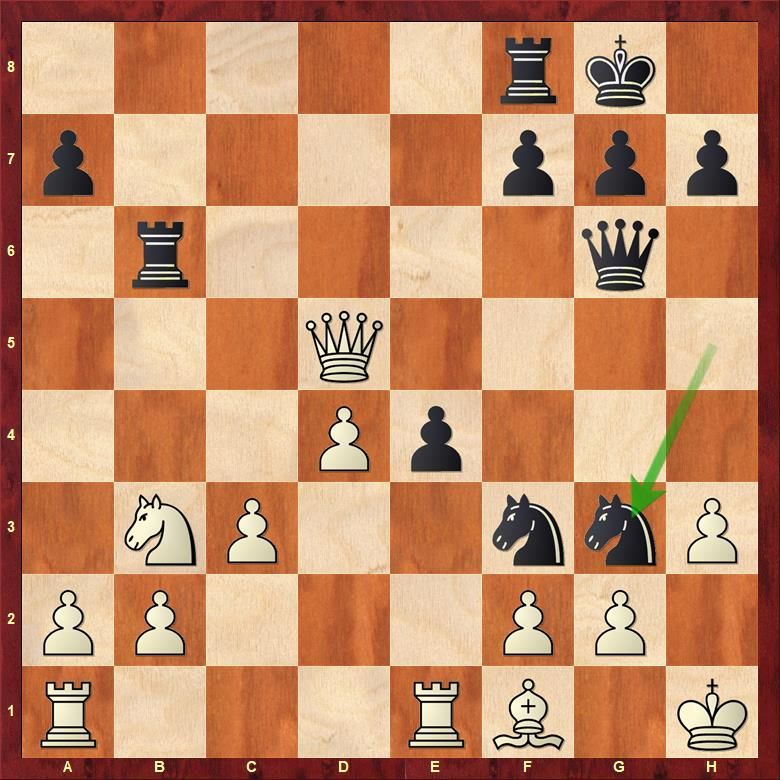 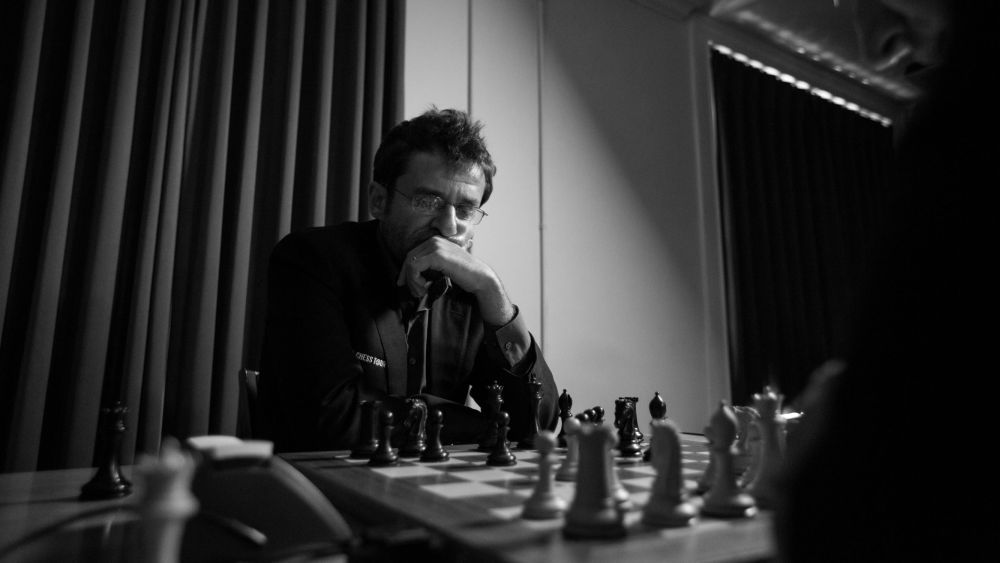 Levon Aronian – when your own words get the strength to come back and bite! | Photo: Saint Louis Chess Club / Spectrum Studios

This, after a particularly pleasing victory in the first round against Alexander Grischuk, whose arrival at Saint Louis wasn’t smooth as he reached the place only at 1 a.m. on Saturday, on the day of the game! 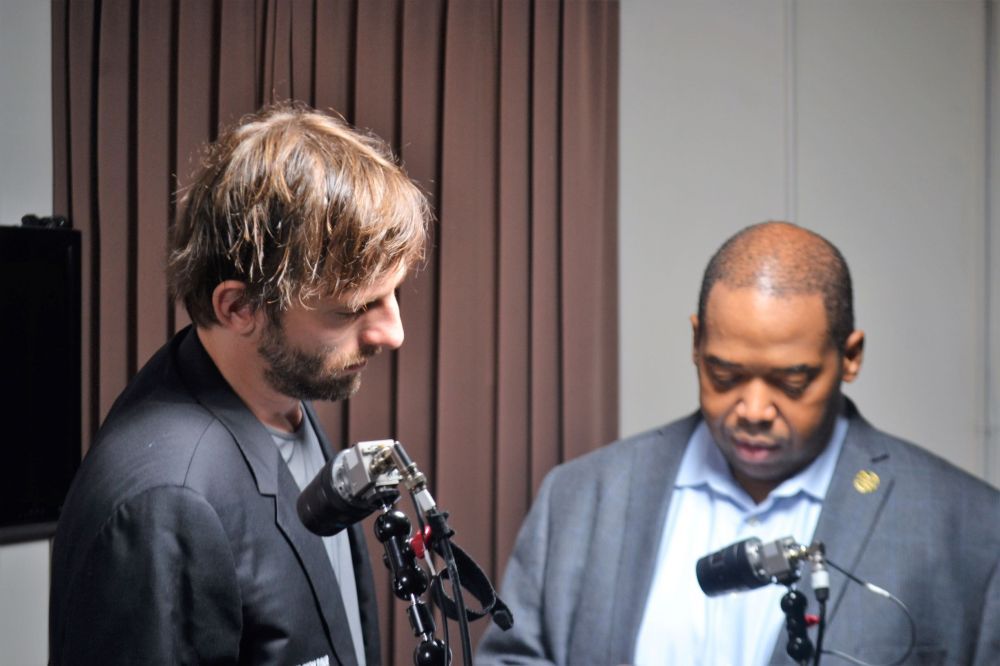 Grischuk, seen a tidy disheveled being appraised of the regulations of the tournament by the chief arbiter Boyd Reed just before the beginning of the first round | Photo: V.Saravanan] 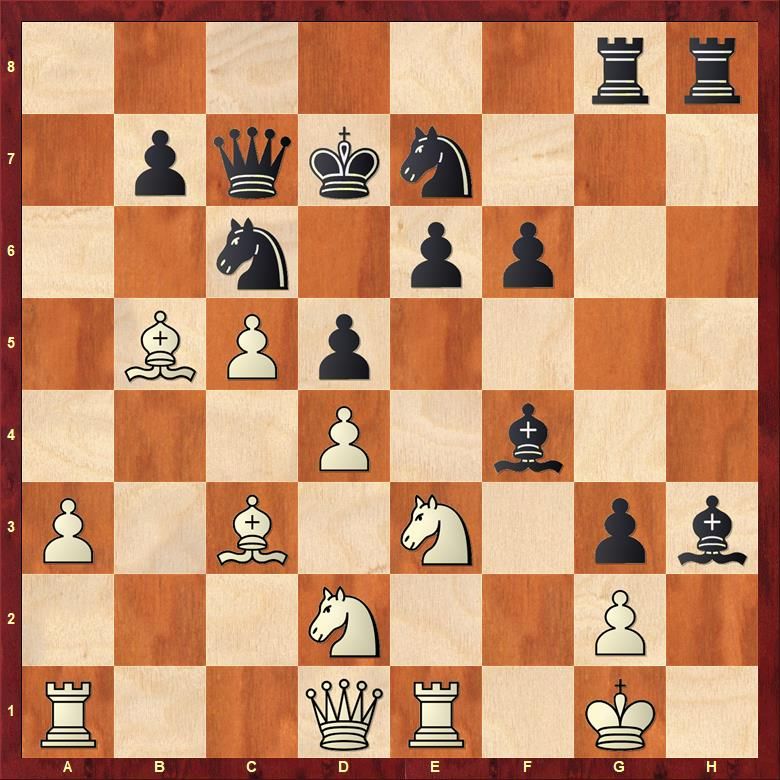 Caruana would later elaborate in a chat with Maurice Ashley that he felt good! “I have spent a lot of time with chess in the last two months, after Paris… I have been playing a lot of sports, and relaxing a little bit…”

Maxime Vachier-Lagrave and Sergey Karjakin were the other two who impressed on the first day, and the latter played a delightful game of ideas about which he can be quite pleased with himself: 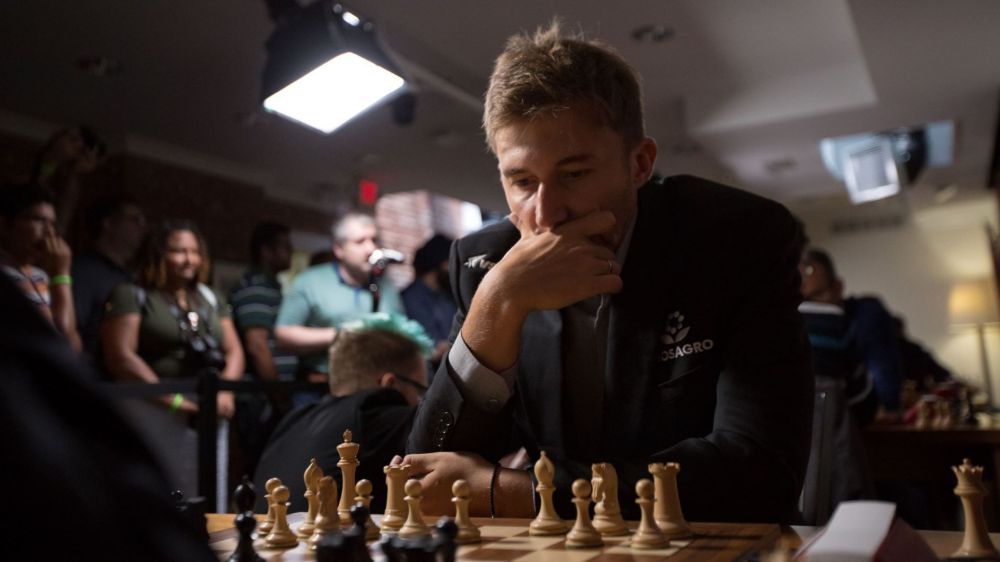 Karjakin – producing a lots of delightful ideas against Dominguez, about which the computer may not get very impressed, but a human brain can appreciate the thought process behind the moves | Photo - Saint Louis Chess Club / Spectrum Studios] 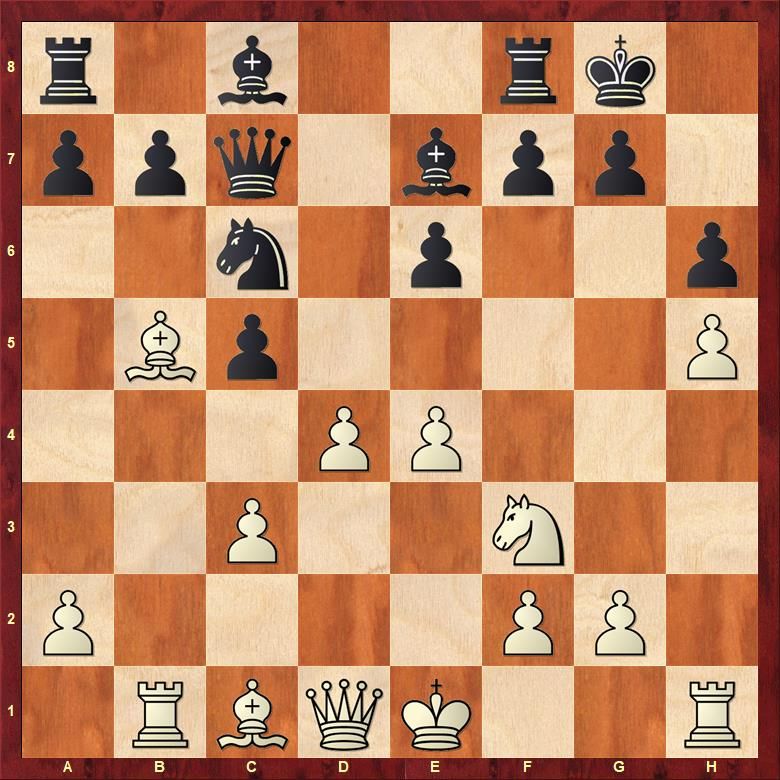 Karjakin came up with the delightful 12.Rh3!? here setting the stage for an attack on the black king. 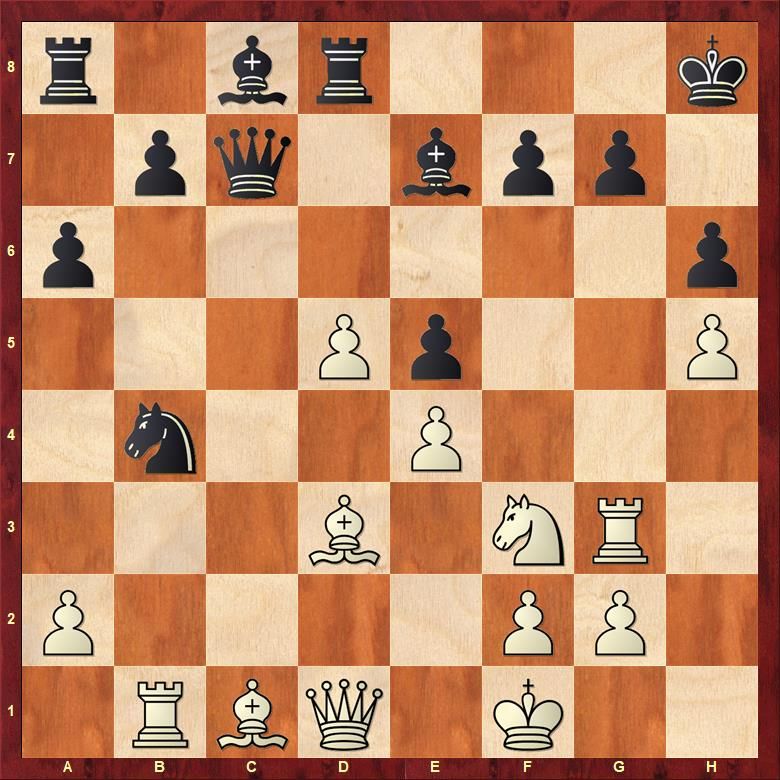 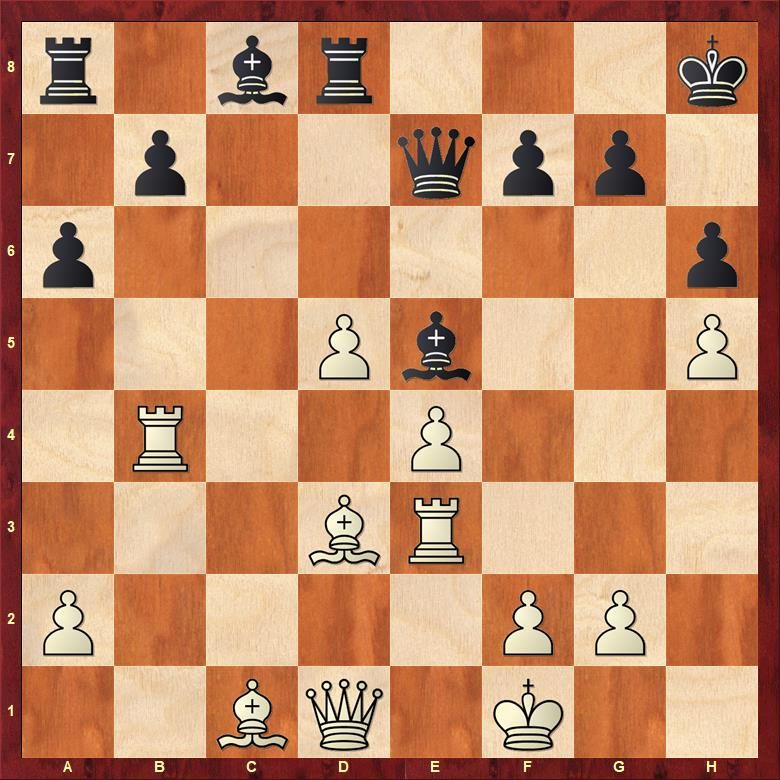 21.Bb2!? Ladies and gentlemen, this is the ‘elephant in the room’, the unspoken presence which was the reason for all white’s moves which were praiseworthy so far! 12.Rh3, 18.Nxe5 and 19.Rxb4, were all conducted with belief in the strength of this bishop, and Karjakin now goes one up in that belief! 21…Bf4 22.Qa1!? The elephant is now even given an extra battery!! By the way, the engines will tell you white has not played perfect chess in the last 10 moves, but what matters is the beauty of the human thought in a rapid game at the highest levels of chess, which enabled Karjakin to produce the moves. He won a deserving game in 28 moves.

And this game also emphasizes why the moniker ‘Minister of Defence’ for Karjakin is so wrong!

Vachier-lagrave ground down Anand from the white side of the most popular opening of our times to score his only victory of his day. But curiously, Anand had his ‘Berlin day’ producing the opening in all the 3 games with either colour. 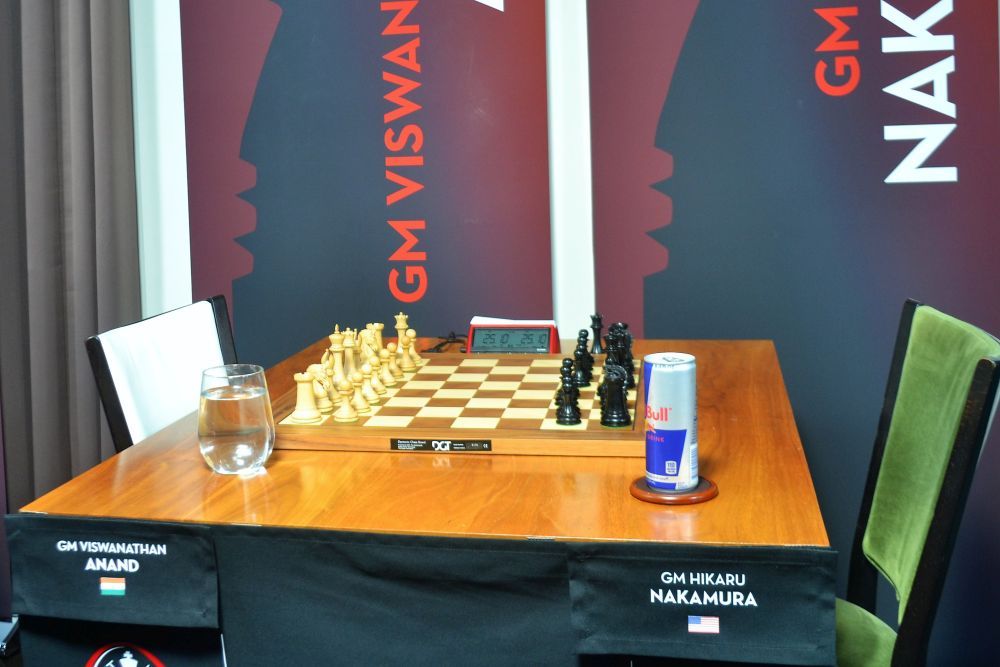 A curious sight greeted the spectators just before the start of the first round. A simple glass of water facing a more colourful tin of RedBull, just before the start of the game Anand - Nakamura  It was quite easy to think up exaggerated quotes, as Nakamura has a score of 4.5 – 1.5 over Anand in the Grand Chess Tour this year before this game, but it was much easier to just keep the simple spectacle – Water versus Red Bull! | Photo: V.Saravanan]

But it turned out to be Anand’s day as he got into one of his favourite weapons of play – exchange sacrifice: 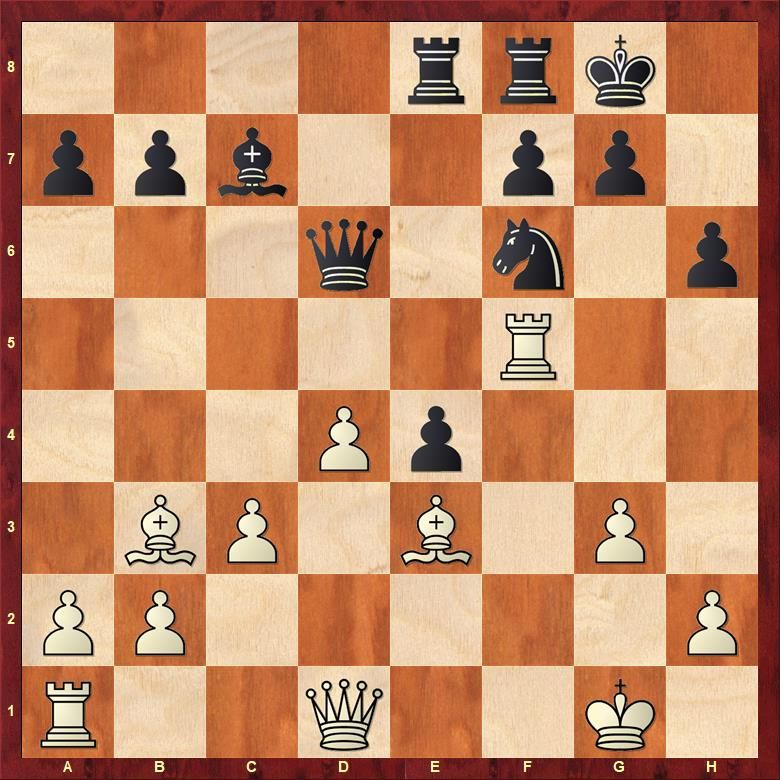 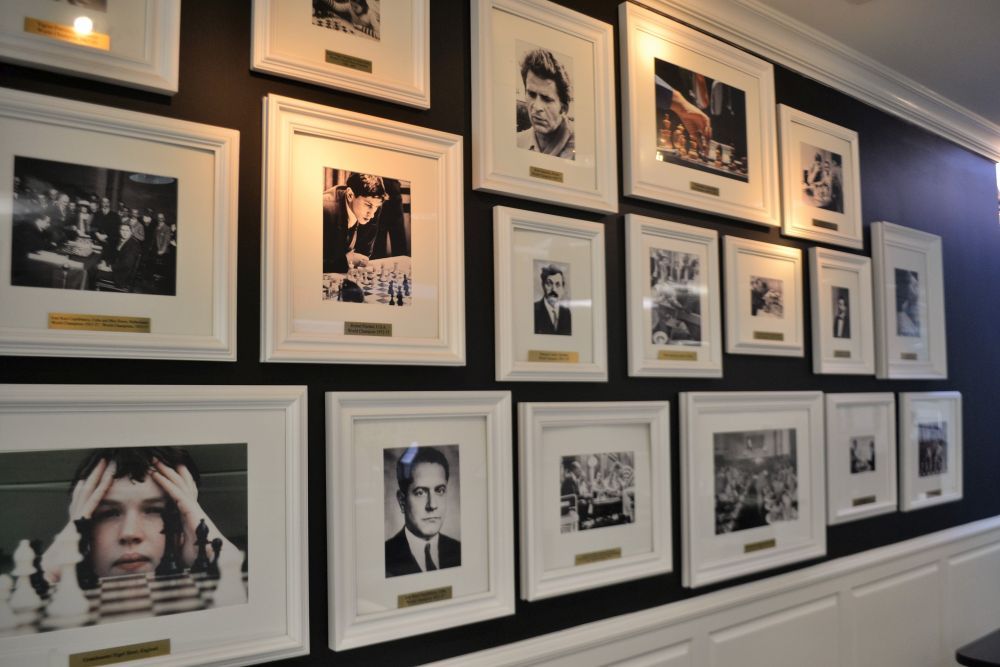 One finds the Saint Louis Club tastefully decorated, and particular set of historical chess pictures on the walls was quite enjoyable| Photo: V.Saravanan] 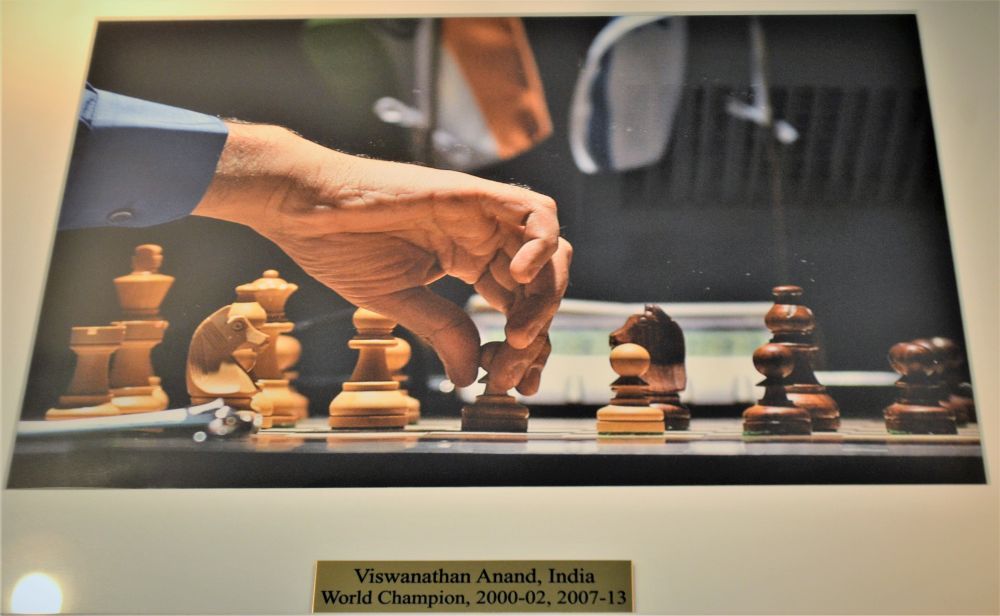 And finally, the other big story of the day was the leader of the Grand Chess Tour at this stage, Wesley So. With characteristic simplicity, Wesley arrives much earlier in the afternoon before the other players, and prepares himself for the game in his own way. Chatting amiably with the organisers and staff of the club, even the spectators, he spends a quiet time with his family, who are obviously his biggest source of strength. 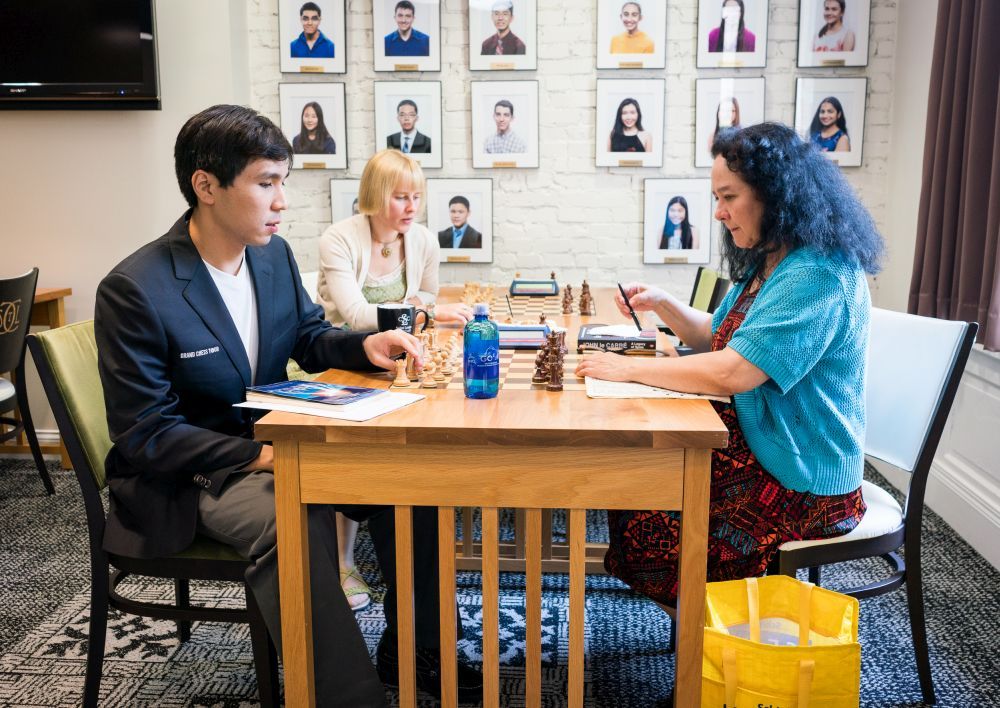 Wesley So with his family, quietly getting ready for the game | Photo - Saint Louis Chess Club / Lennart Ootes]

But the day was mostly forgettable for him, as he started with a loss against Mamedyarov in the first round where he was quite not himself.

Wesley So – Mamedyarov, 1st round: 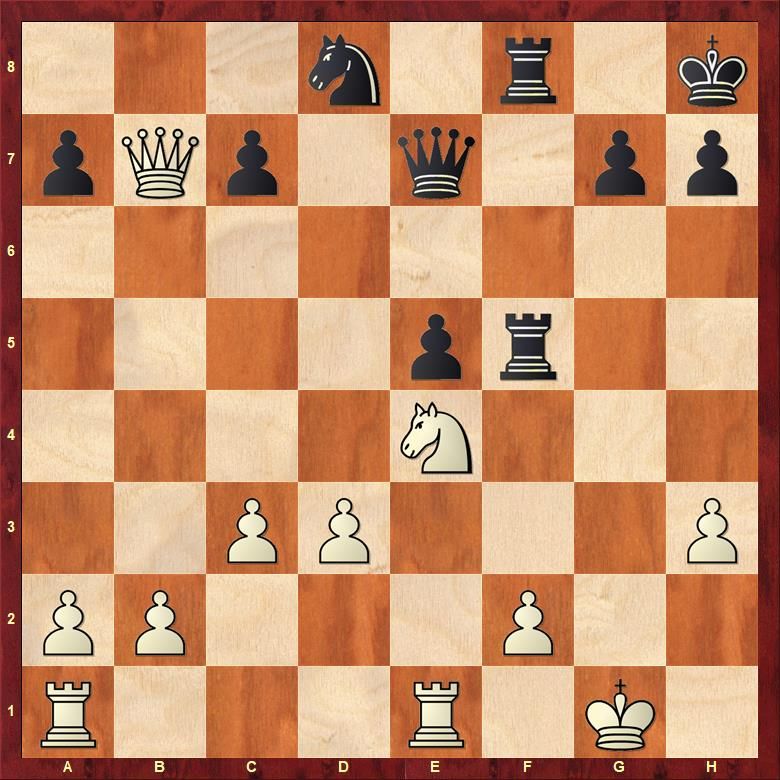 The position may be objectively defendable for white, but the very thought that So went into this position with gaping holes in the kingside, is itself striking, considering his main strength of strategical soundness. He gradually went downhill to lose the game in 30 moves. 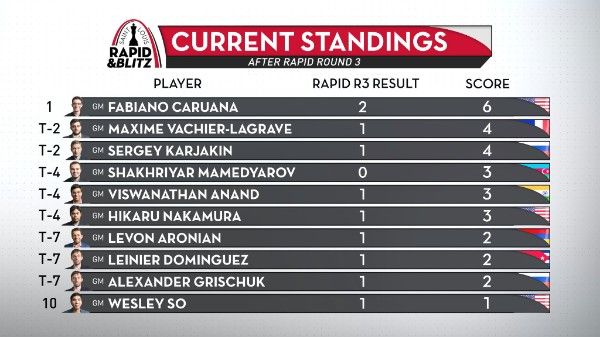