How many of us have thought of doing something good for the world and making a difference in someone's life but never found the time for it? Here is the story of a 23-year-old passionate chess player Sahil Batra that will touch your hearts and inspire you! Sahil is not only contributing to the society in his own little way but in the process he is making use of his favourite game, chess, to make a difference! Read this beautiful story of unhindered kindness. A bond created in 2014 that's still going strong in 2017!

I'm an ordinary but passionate chess player from Ludhiana, Punjab. My father taught me the moves of the game when I was eight-years-old but I actually developed a keen interest only a few years later. In the year 2011, when I was in 12th standard, one of my best friends, Chetan, told me that he had planned a visit to a special place and wanted me to come along with him. He took me to this orphanage home named Red Cross Bal Bhawan. This was the first time that I had visited an orphanage. There were more than 70 children between the age group of two to twelve years old. We distributed refreshments and spent some time with them. 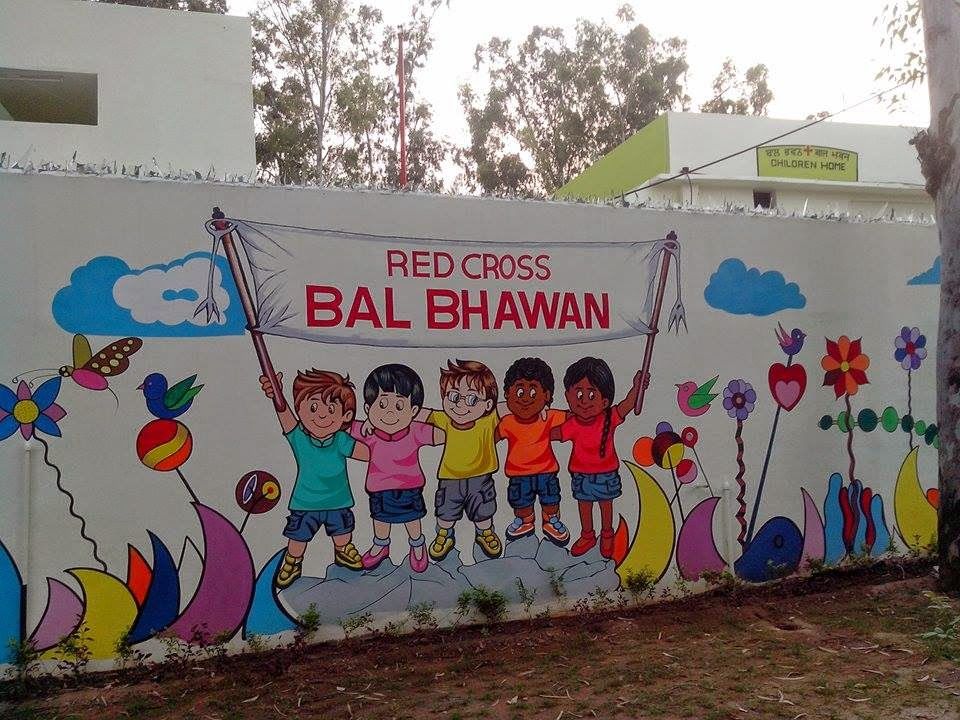 The environment inside the place was totally different from the outside world. Knowing that these kids have nobody in this world except their fellow orphanage friends and care taker really made me feel sad. Yet the surprising part was that they seemed to be happy with no worries and enjoying life to their heart’s content! I felt so small that day. I realized my problems were nothing as compared to those orphaned children. It had become a habit for me to curse my situation even on facing little problems. I asked myself: Despite having everything in my life why do I feel unhappy and sad while on the other hand these kids had absolutely nothing yet they were happy, excited and full of joy? From that day onwards, my perspective towards life changed. 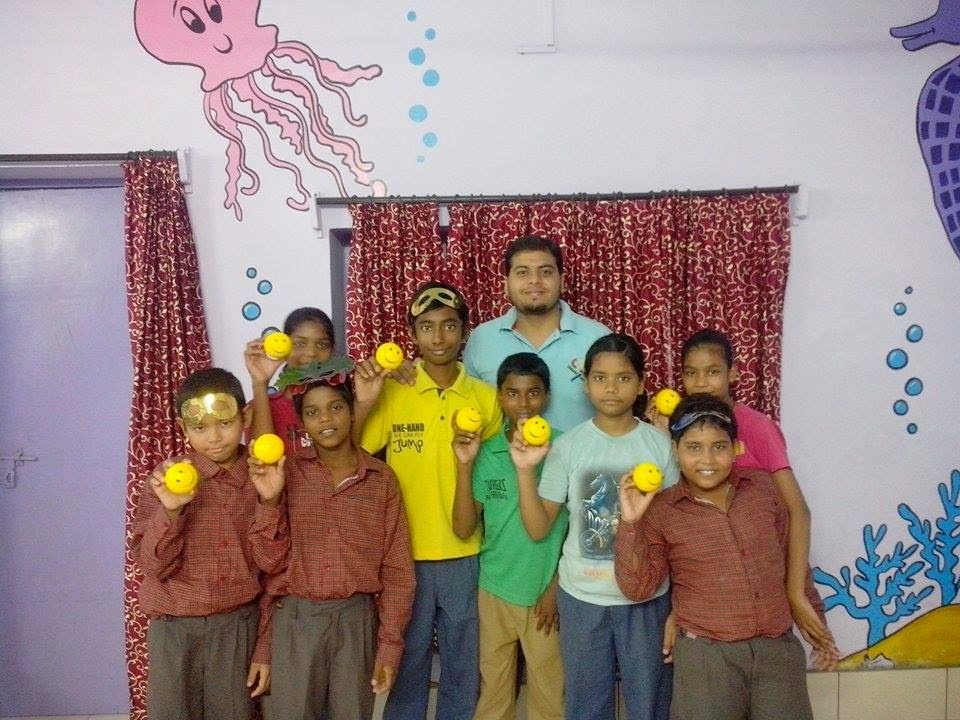 Smile at your problems!

After this, I started visiting the orphanage more often. Sometimes I would distribute clothes and sometimes refreshments. But just a month ago in August 2014, I observed that everyone who visited the orphanage would give some materialistic stuff to the kids which they had in surplus. As we saw this, it dawned on me and Chetan (my best friend) that eatables and other things give momentary happiness which fades away pretty soon. We had to give them something intangible that they could carry with them for the rest of their lives and which no one could steal from them. That’s when I decided that I had to share my knowledge with these kids. As a chess player I thought why not to teach them the basics of chess. I asked the kids, “Who wants to play chess?" Approximately 40 out of the 70 raised their hand. I was quite surprised by the majority. A handful of them even knew how to play. It would be great fun to teach these bunch of enthusiastic kids, I said to myself. We got four mat chess boards and one wooden. Those who knew how to play opened it and started arranging the pieces. 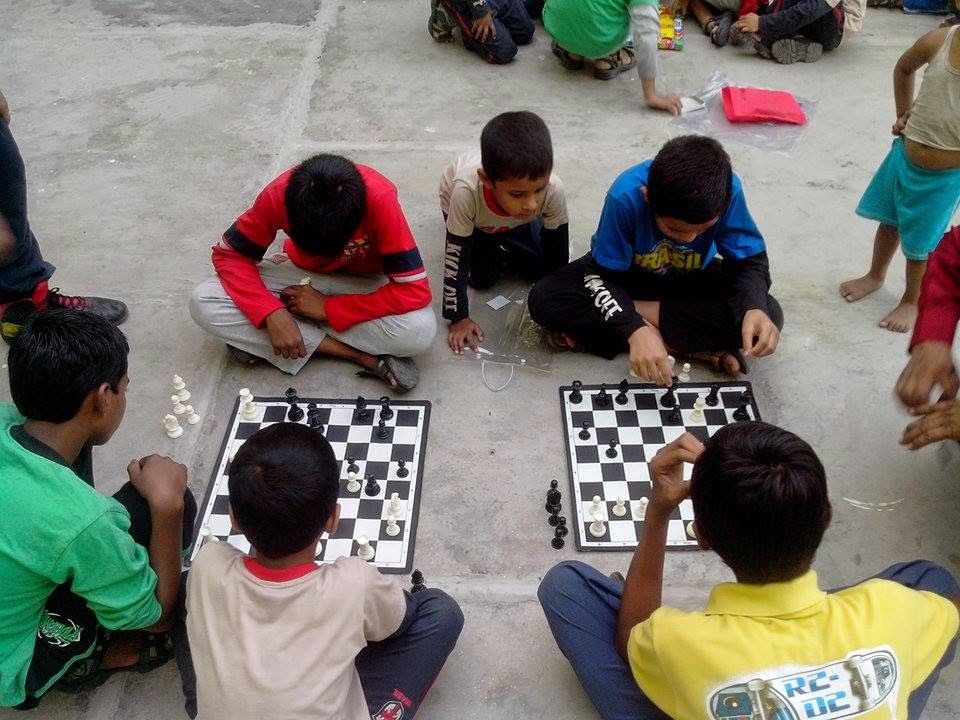 The chess wave had started at the Red Cross Bal Bhavan!

I knew that I had to start from the scratch. So firstly I taught them to have the white square on the bottom right of their chess board. Next was how to arrange the pieces (black queen on black square and so on!) And then I moved on to the value of the pieces and how they move. By that time many of the little kids had had enough! Learning so many rules for a game was definitely not their cup of tea! But the wonderful part was that I still was surrounded by a dozen odd kids! 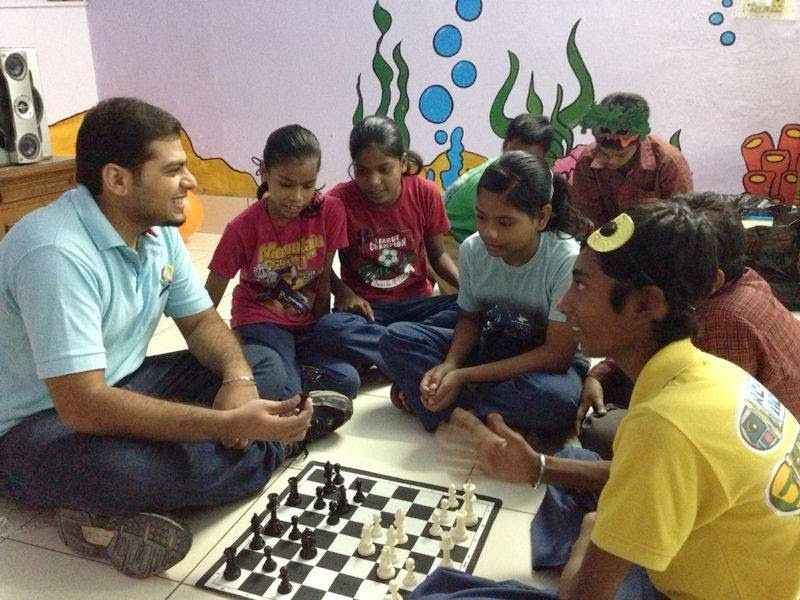 The wheat had been separated from the chaff!

Abhishek, a twelve-year-old kid, showed tremendous interest! Almost every minute he had a doubt! His questions were genuine and filled with a thirst to learn the little nuances of the game. With every question that was being asked, I felt more and more confident about my decision of teaching these kids the game of chess! As days passed by I started teaching them how to open the game with a central pawn, the necessity of development and the importance of king safety. With a basic proficiency level achieved in their game, I started pitting them against each other. 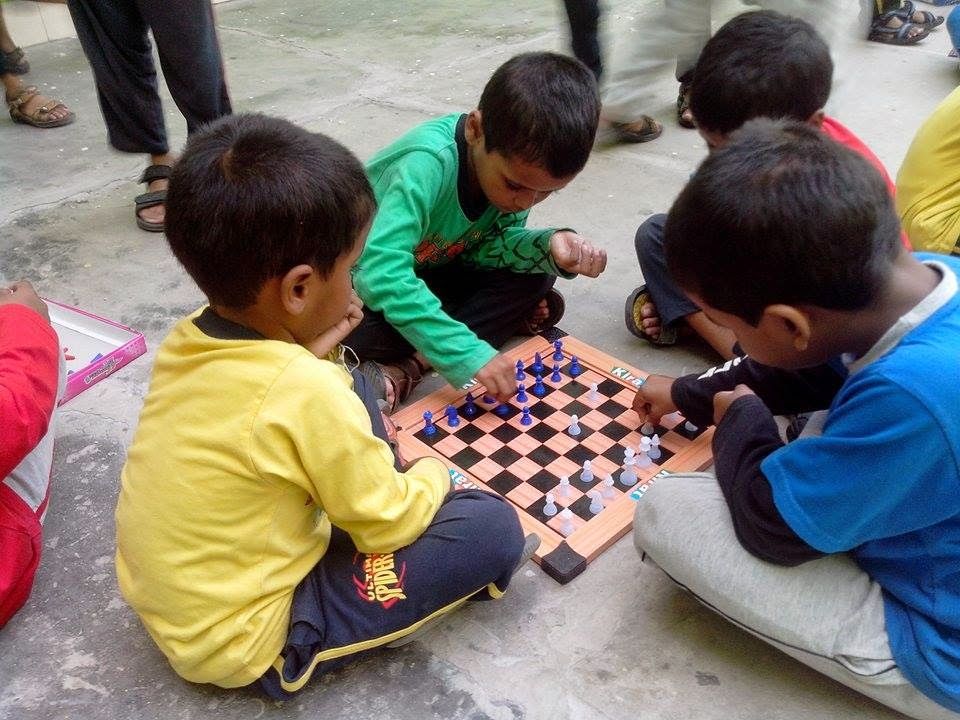 Little kids thoroughly engrossed in the world of 64 squares

All the kids tried to play their best. But there was one who was a cut above the rest. Abhishek (the boy who had asked me innumerable questions) played like a professional. Opening development, king safety, he was applying everything that I had taught them in the past few days. I was mesmerized by his grasping power. 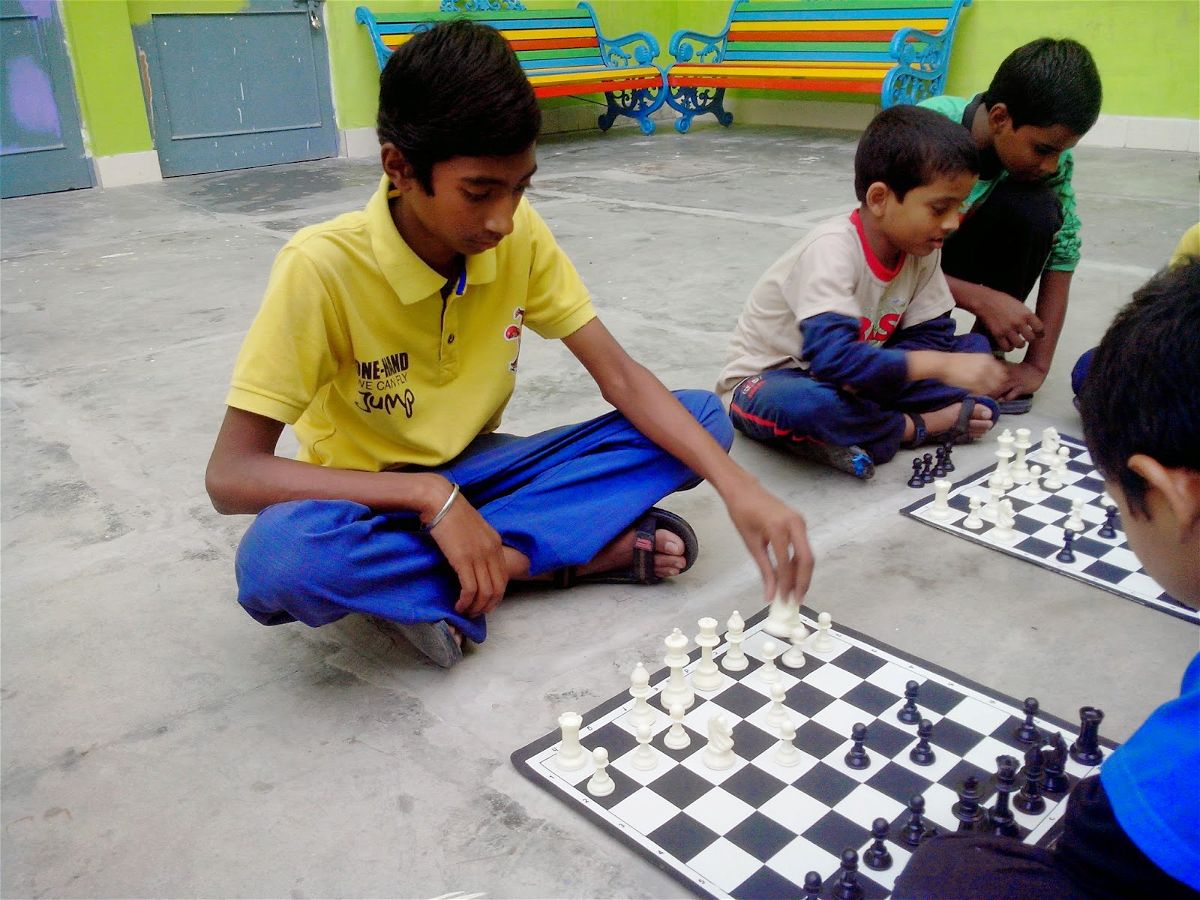 Abhishek holding the knight in his hand! He knows the value of development!

He truly loves this game and takes his time to make a move. He makes sure that he isn’t blundering and places his pieces on good squares. I see a fantastic player in him and I am sure that he will soon surpass me. 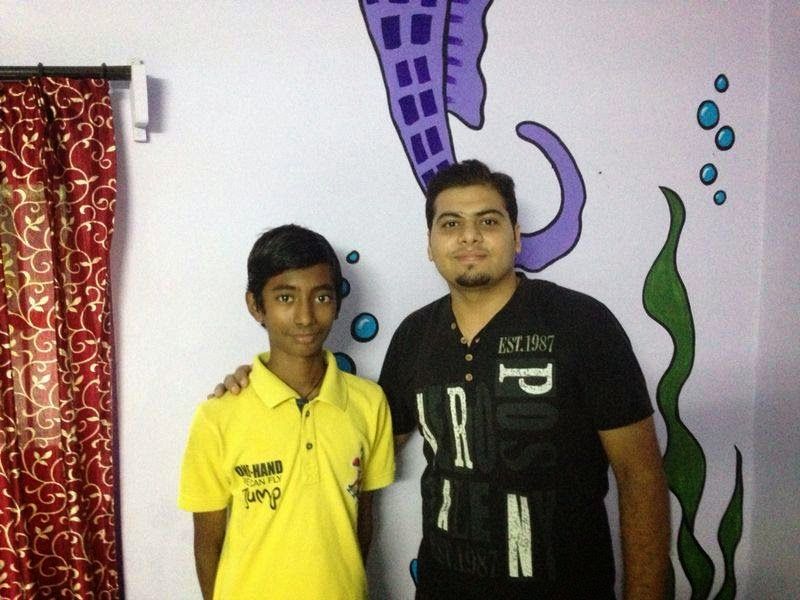 The coach with his brightest pupil

The children now practice with a clock and I have started teaching them openings like Ruy Lopez, Sicilian, Caro Kann, Slav etc. 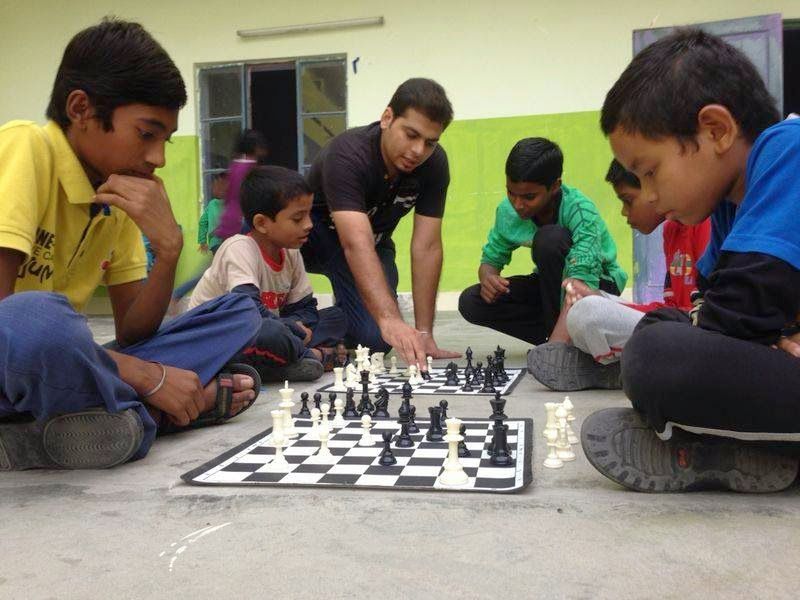 Teaching the tricks of the trade 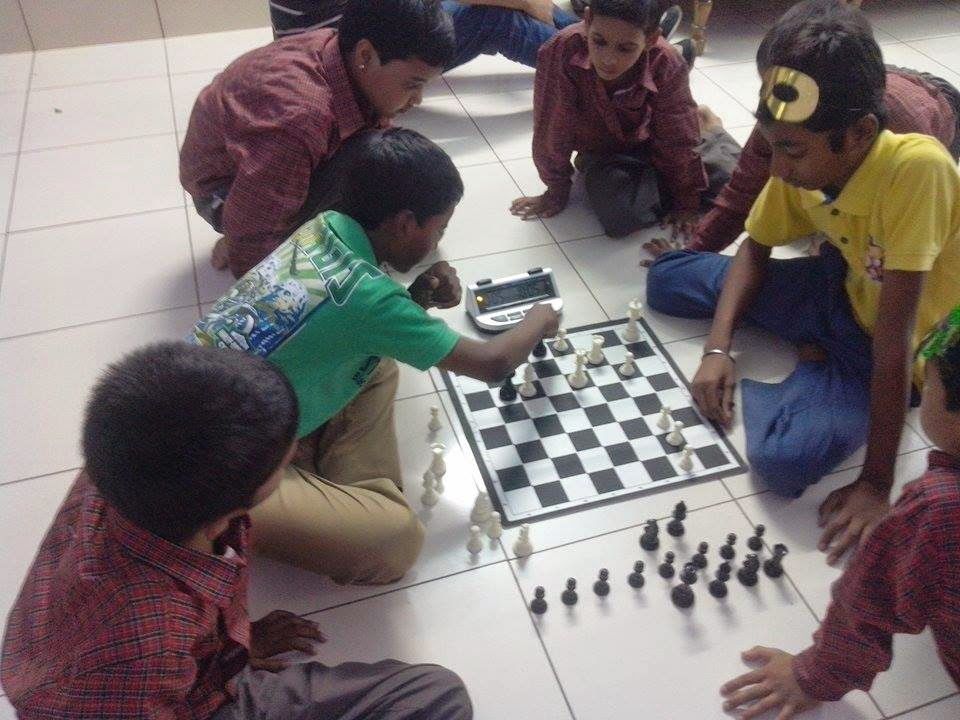 Practicing with a digital clock 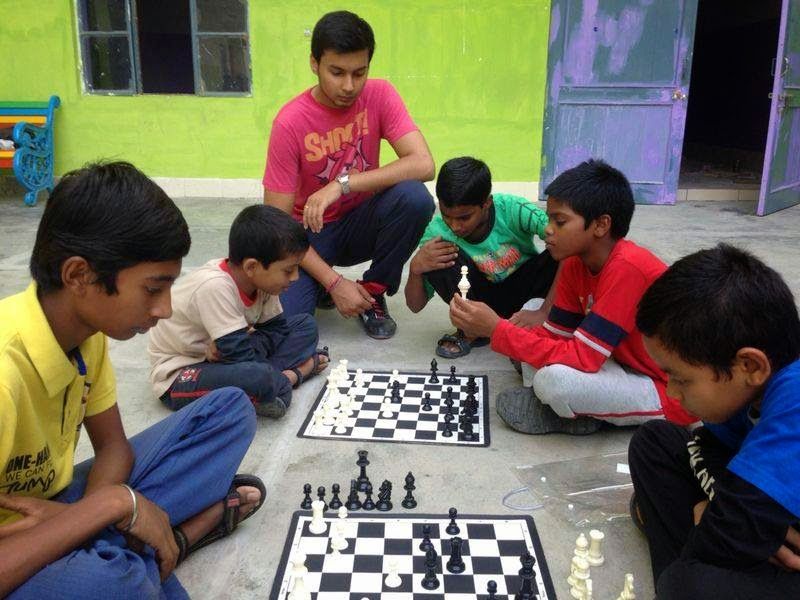 Being a chess player, if I had proper guidance and training when I was young, I would have made chess my career. These children are young and quick learners. My ambition is to provide them with a good level of training so that they can become winners at state and national level tournaments and can think about pursuing chess as their career.

The orphanage hosted students only up to 8th standard. So Abhishek had to leave and went to another orphanage near his village to continue his studies. It was 2015 when he left Bal Bhavan. I was unaware about his whereabouts. But early this year (2017) I got a call from an unknown number. It was the familiar voice of my favourite student. That young guy had got his own mobile phone and had managed to call me! But how did he get my mobile number? A few years ago I had written my number on the backside of his notebook. He had preserved it!

I was so happy to hear that he is still continuing his higher studies. But what about chess? He still played with his new friends and had got his own chess set and clock as well. He had also taught the game to his fellow mates. Just that his practice wasn't as frequent as it used to be in Bal Bhawan! I was proud of the fact that I had taught chess to Abhishek and that he was still practicing it. But there was something that remained incomplete - I wanted Abhishek to play in a tournament!

So in April 2017 I invited him to my hometown Ludhiana. I saw him after nearly 3 years. He stayed at my place, we practiced together the night prior to the tournament. 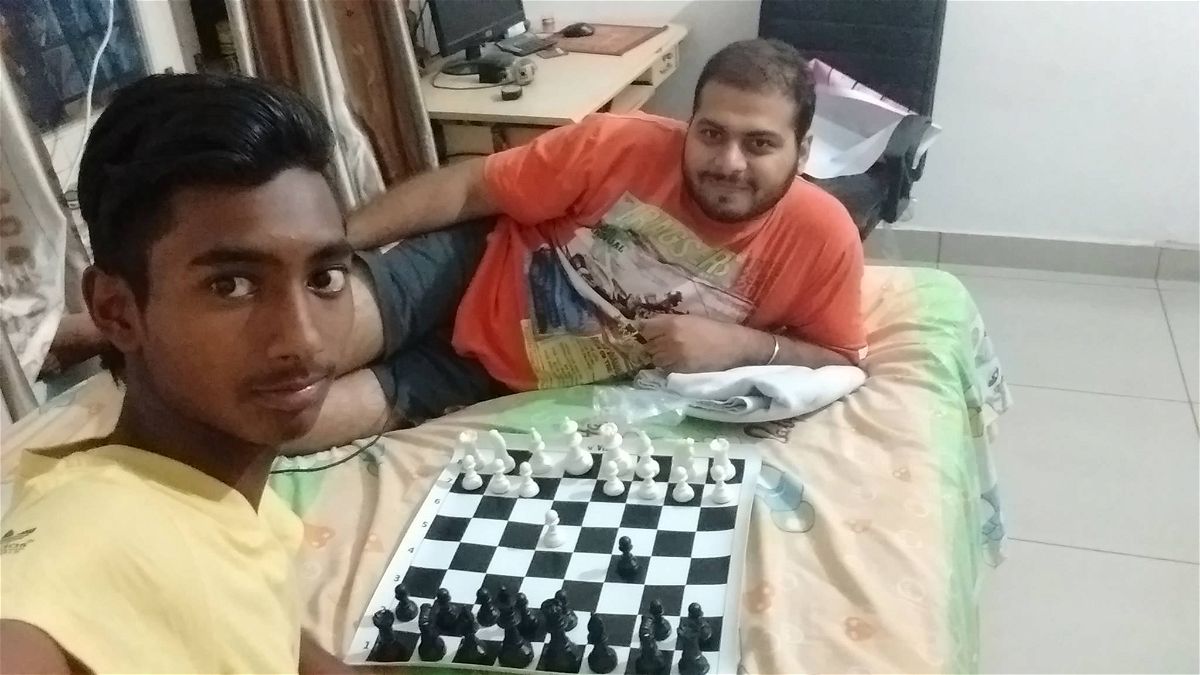 Abhishek at Sahil's place practicing before the big day!

Of course, he remembered all the things I had taught him about center control, rapid development and many other strategies. That was such an amazing feeling. Next day Abhishek played the first tournament of his life. My eyes were filled with tears of pride as I saw my little guy confidently make moves on the board. He scored 2.0/5. 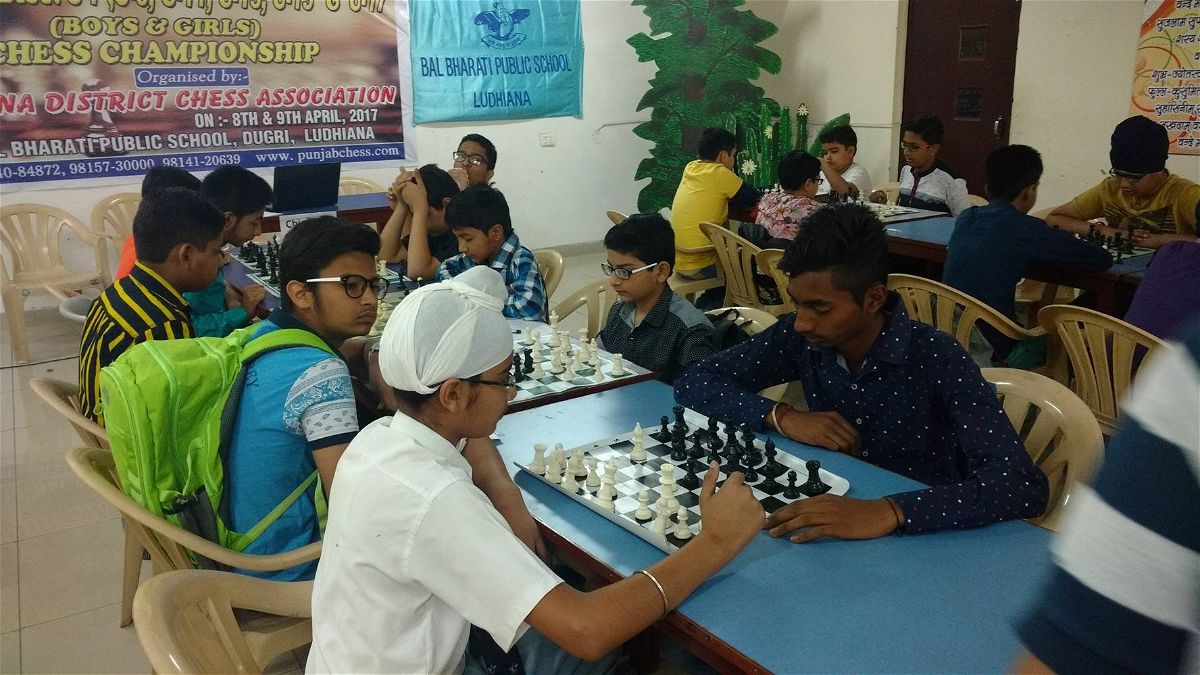 Abhishek playing the first chess tournament of his life! 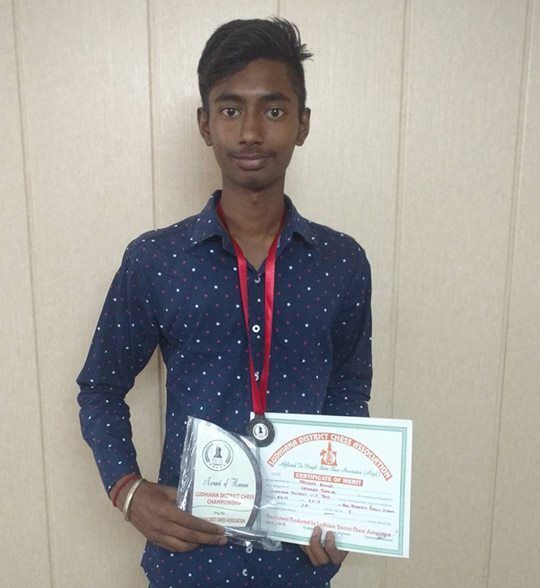 A medal, trophy and a certificate for his efforts! 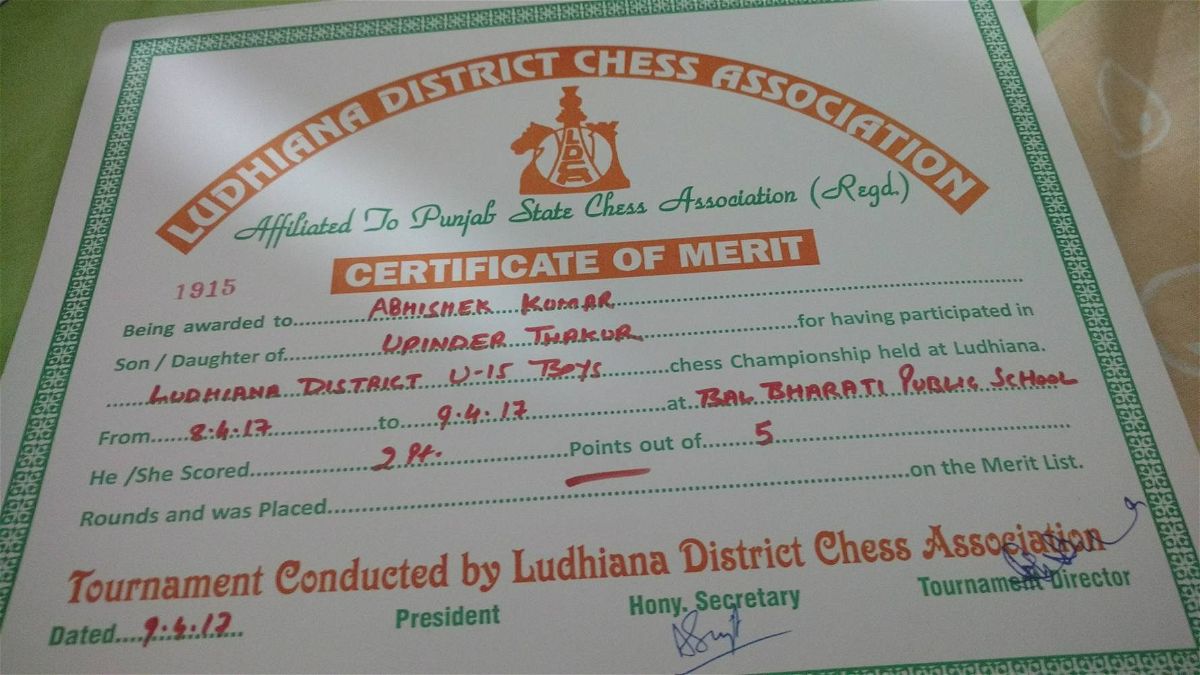 Upinder Thakur would have been proud of his son

Currently Abhishek is in his new orphanage and I shifted to Bangalore as my job training is ongoing. We are thousands of miles apart, but one thing will bind us forever - the beautiful game of chess! 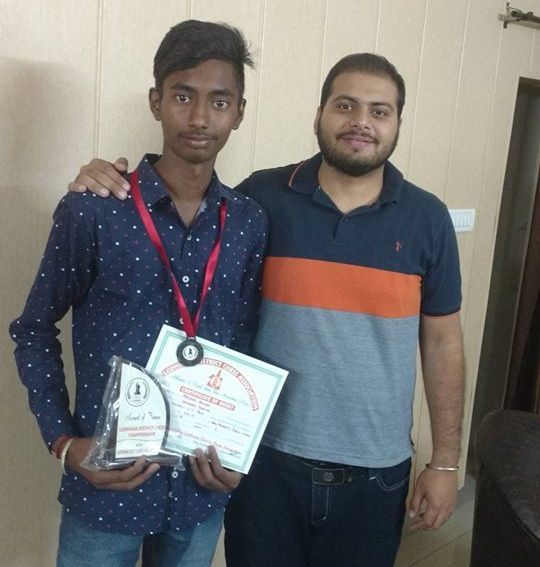 The beautiful bond of a student and a teaher created by the game of chess! Abhishek and Sahil in 2017

From being a 20-year-old passionate chess player in 2014, a youngster who loved to dance and believed in Karma theory, Sahil in 2017 is now training for the post of the assistant manager at Axis Bank in Bangalore. In the three intervening years he was a chess coach in two schools and currently misses not only chess but also his students very much. 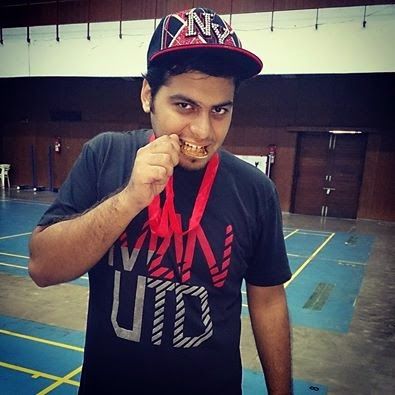 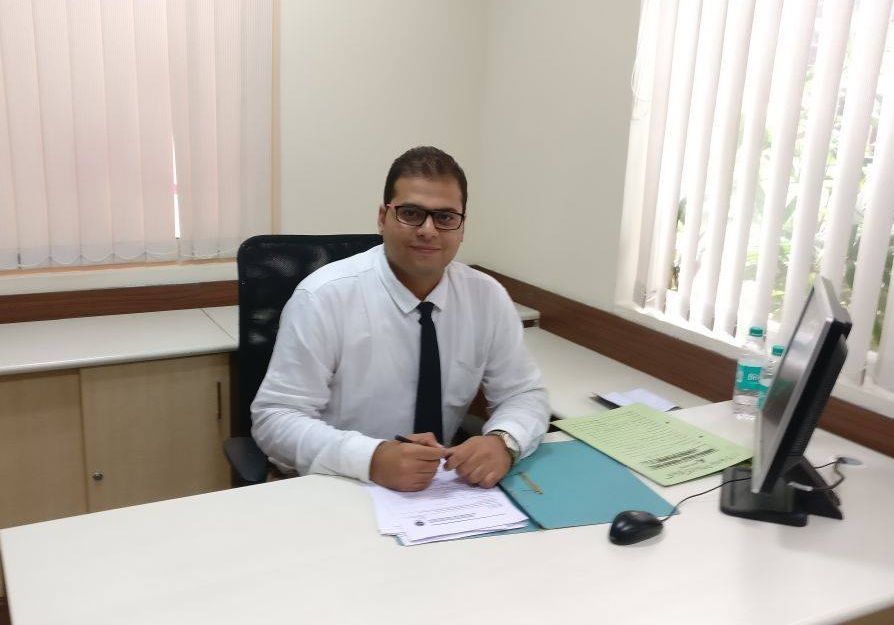 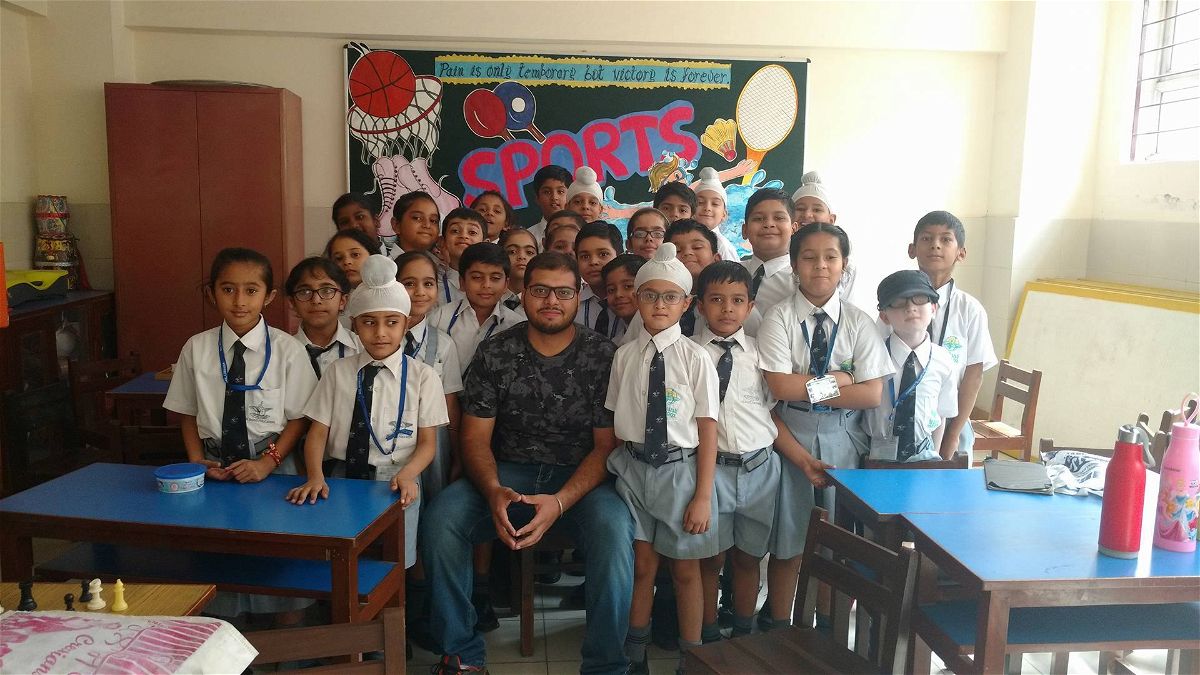 Sahil is responsible for propelling the chess population of our country! 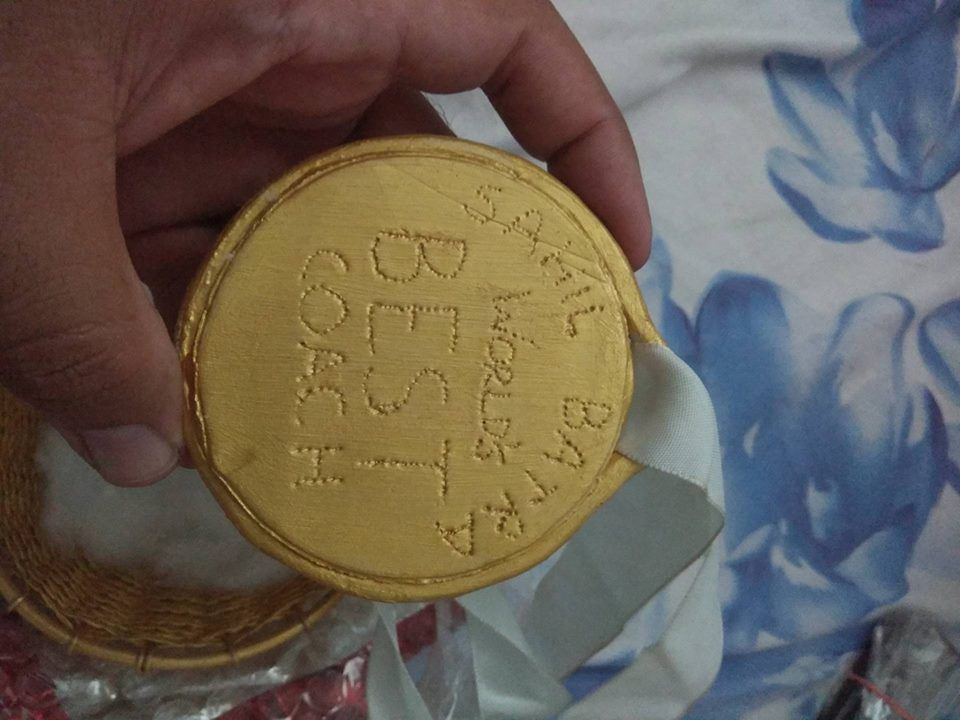 And these are some of the gifts from the students that remain special forever!

The story until 2014 was first published in ChessAce blogspot exactly three years ago! If you found the story of Sahil and Abhishek touching, then do write your thoughts in the comments section below!