Often described as "the chess machine", Jose Raul Capablanca, one of the greatest chess players the world has seen, was born today. Known for the simplicity of his games and an immaculate endgame technique, Capablanca has influenced several world champions like Bobby Fischer and Anatoly Karpov. As a tribute to the genius of the third world champion, Aniket Sawant, a chess enthusiast from Mumbai has sent us this article.

"People who want to improve should take their defeats as lessons, and endeavour to learn what to avoid in the future. You must also have the courage of your convictions. If you think your move is good, make it." -Jose Raul Capablanca 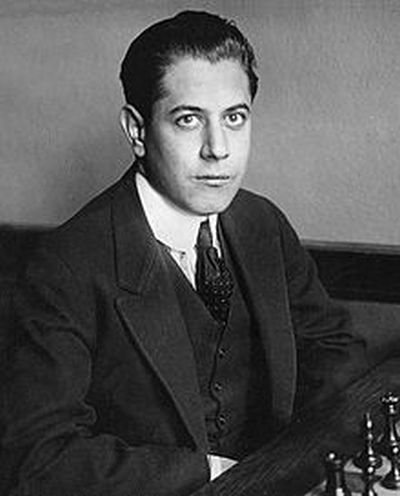 19th  November happens to be the birthday of one of the greatest players in chess history and truly an endgame genius. Yes,  some of you might have already guessed it, it is none other than Jose Raul Capablanca.

How it all began

The Havana heat was at its prime that afternoon. Jose Maria, an officer in the Spanish army, indulged himself in a series of chess games against a fellow colleague. Watching eagerly, fascinated by the 64 squares, was Jose Raul, the four-year-old son of Jose Maria. The little boy, had his eyes glued to the chess set as his father and his colleague moves pieces from one square to another. When a piece was captured and put aside, Jose Raul would pick it up and examine. He tried to figure out how the game is played just by watching.

"There, that's checkmate!" said Jose Maria to his colleague.

His colleague smiled and offered his hand. The two were about to put the pieces back into the box when the Jose Raul exclaimed, "But you did not win, daddy!"

Surprised, the Spanish army-man asked his son why he thought so. Jose pointed out that he had made an illegal move. But the boy didn't even know how to play the game, thought his father. Jose Maria tried to dismiss the comment, but his son insisted that he could prove his claim. His father agreed. Jose Raul set up the position and showed that his father had indeed made an illegal move! His father was stunned.

The two then played a few games together and the four-year-old beat his father twice. Jose Maria knew this was extraordinary. He enrolled Jose Raul at the Havana Chess Club a few years later. By the time he was thirteen, Jose Raul had already beaten Juan Corzo, the Cuban National chess champion.

Capablanca mainly excelled in rapid chess. In 1906, he even won a rapid play tournament ahead of reigning World Champion, Emanuel Lasker. This was just an indication of the storm that was about to shake the world of chess. Because of Capablanca’s  rapid skills, he would enrol himself into a lot of simultaneous exhibitions. So, he was no mysterious figure coming out of the dark and taking over the chess world under its shadow. Everybody could see the jewel in front of them that just needed some brushing before it could shine in bright light. 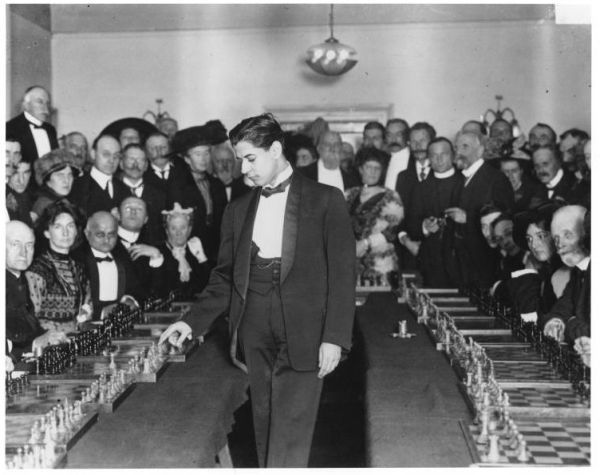 Young Capablanca at a simul in London, 1911 | Image Source

When in 1911, Capablanca challenged Emanuel  Lasker for the World Championship Title, it was indeed a start of a new revolution in the world of chess. Lasker accepted his challenge while proposing 17 conditions for the match. Capablanca objected to some of the conditions, which favoured Lasker, and the match did not take place. The match may have been cancelled but the excitement among the chess players to witness two geniuses head on hadn't burned out.

In January 1920, Emanuel Lasker and Capablanca signed an agreement to play a World Championship match in 1921, noting that Capablanca was not free to play in 1920. Because of the delay, Lasker insisted that if he resigned the title, Capablanca should become World Champion. For Lasker, it was a do or die situation; both of them were at a point of no return.

Lasker then resigned the title to Capablanca on June 27, 1920. In his opinion, the chess world did not like the conditions of their agreement. In his own words, he said,” I cannot play the match, knowing that its rules are widely unpopular. I, therefore, resign the title of the world’s champion in your favour. You have earned the title, not by the formality of a challenge, but by your brilliant mastery. In your further career, I wish you much success." 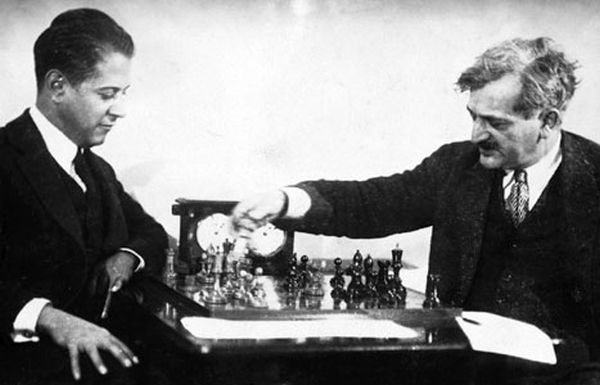 When Cuban enthusiasts raised $20,000 to fund the match provided it was played in Havana, Lasker agreed in August 1920 to play. But he insisted that he was the challenger as Capablanca was now the champion. Capablanca signed an agreement that accepted this point, and soon afterwards published a letter confirming it. The match was played in March–April 1921; Lasker resigned after fourteen games, having lost four games and won none.

When prime was past

Finally, as all great things have come to an end Capablanca lost his world championship title to Alekhine.The world championship crown changed heads, not because of a spectacular performance by Alekhine but rather Capablanca’s inability to convert positions. It is to be noted that, in past, Capablanca had a very good score against Alekhine. In fact, Alekhine had even admitted once that he had not expected himself to beat Capablanca. I guess Capablanca's own demons were responsible for his downfall as for some unknown reason he was unable to put up a performance he was known for.

Before ending my tribute to the master, I would like to present to you one of my favourite games of Capablanca. 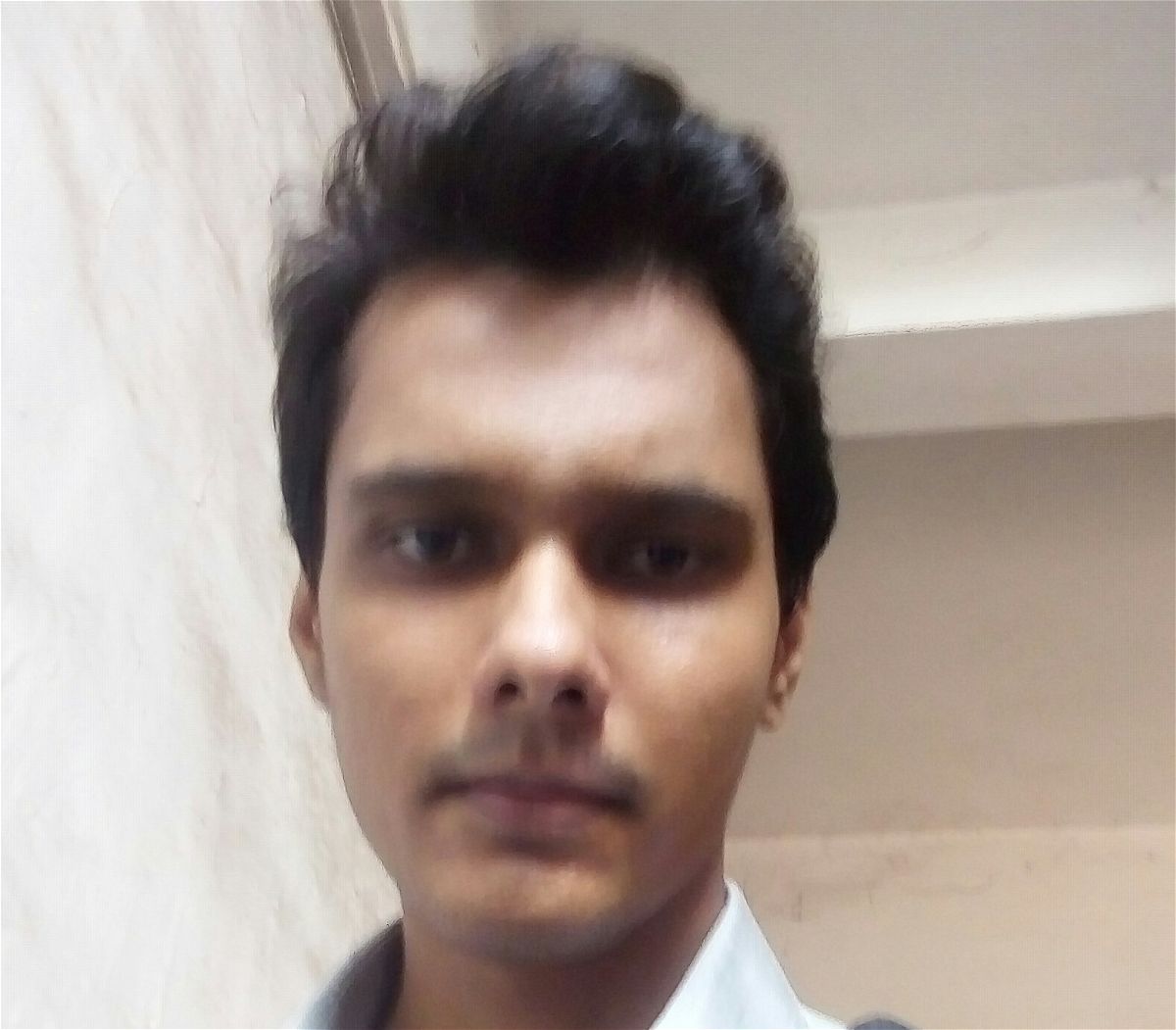 Aniket Sawant is an avid chess player who has a keen interest in writing articles about chess players and chess events. He is currently pursuing ACCA from Oxford Brookes University. He also loves learning different languages.