There are few men in the chess world as passionate about the game as Ranjan Mohanty is. The Income Tax officer from Bhubaneshwar has a deep desire to excel at the game of chess. His hectic work schedule doesn't allow him to take part in chess tournaments. However, that doesn't mean that Mohanty stays away from chess. He found a unique way to merge his profession with his passion at the Bali Jatra in Odisha. Top players like Padmini Rout, Swayams Mishra and Rakesh Kumar Jena visited Ranjan's stall. What was this unique idea? Read on to find out!

His indomitable passion for chess made him opt for somewhat an unique  way to popularise and promote the game. A serving officer in India's Income Tax department, Ranjan Mohanty has been busy making young and old aware and adopt chess with a determined effort to develop basic interest about the game in the popular psyche. And fortunately the idea has been well appreciated.

What Mohanty did was to hire space in Bali Jatra  - a historic mega cultural event of India's Eastern State of Odisha. Held in Cuttack city every year on the full moon day in the month of Kartik (October-November) as a tribute to ancient sailors of the state on their daring maritime missions to distant lands namely the islands of Bali, Java, Sumatra, Borneo and Ceylon (Sri Lanka). Over the years the magnificent week long Mela (fair) has developed into a major cultural-trade show drawing over a half a million visitors everyday who flock to the Jatra on the banks of one of the India's largest river Mahanadi.

Mohanty - a FIDE Instructor himself - converted his space to a beautiful chess arena meticulously explaining the intricate nuances of chess to visitors specially to school children. To his pleasant surprise he found their popular curiosity about the game personally inspiring. Armed with his previous year's experience, he decided  again to come back to the fair with a freshly spruced up stall with loads of display boards, literature, books, posters and placards. He also faced barrage of questions from the young children signifying their growing interest in the game which he answered in a patiently simple manner making the kids happy. Mohanty, in fact, acknowledged the superb support he received from three IMs from the state  - Padmini Rout, Swayams Mishra and Rakesh Kumar Jena - who visited his stall and encouraged his effort. 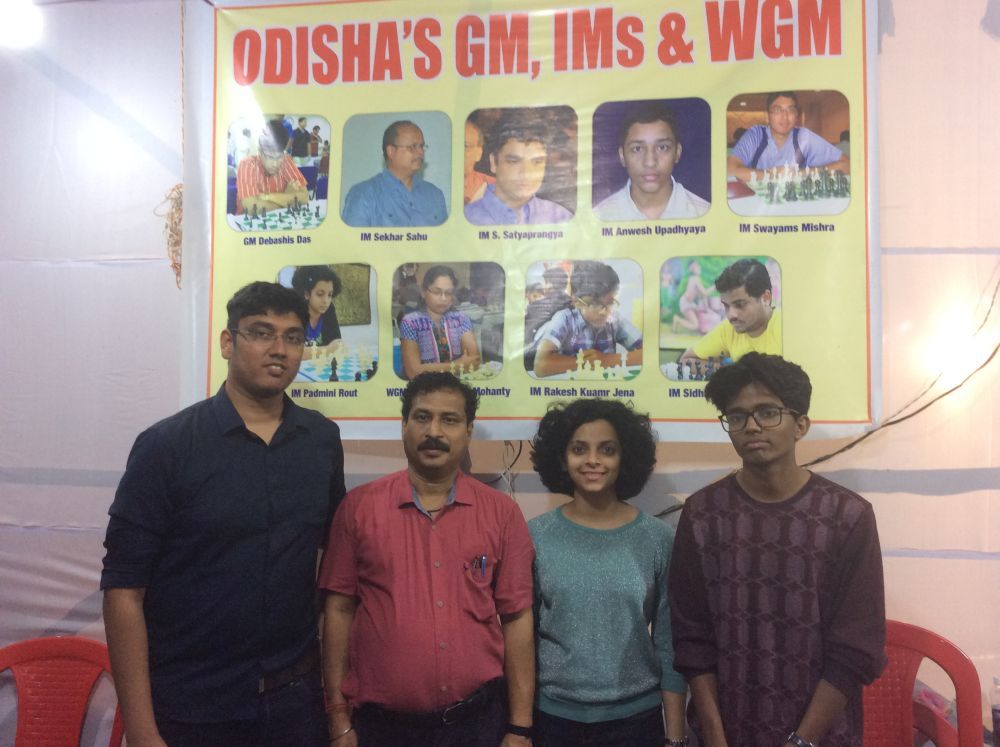 He was also privy to heartening support from his Income tax department colleagues with many top ranking officers visiting his stall. His top boss, Principal Director of Income Tax (investigation), Bhubaneswar, Odisha, Ashok Kumar Satapathy personally visited his stall and expressed words of appreciation. Interestingly, the chess arena in the fair had a bold placard extolling people "Pay your Income Tax Be The King" as if to symbolise Mohanty's equal commitment to his job. 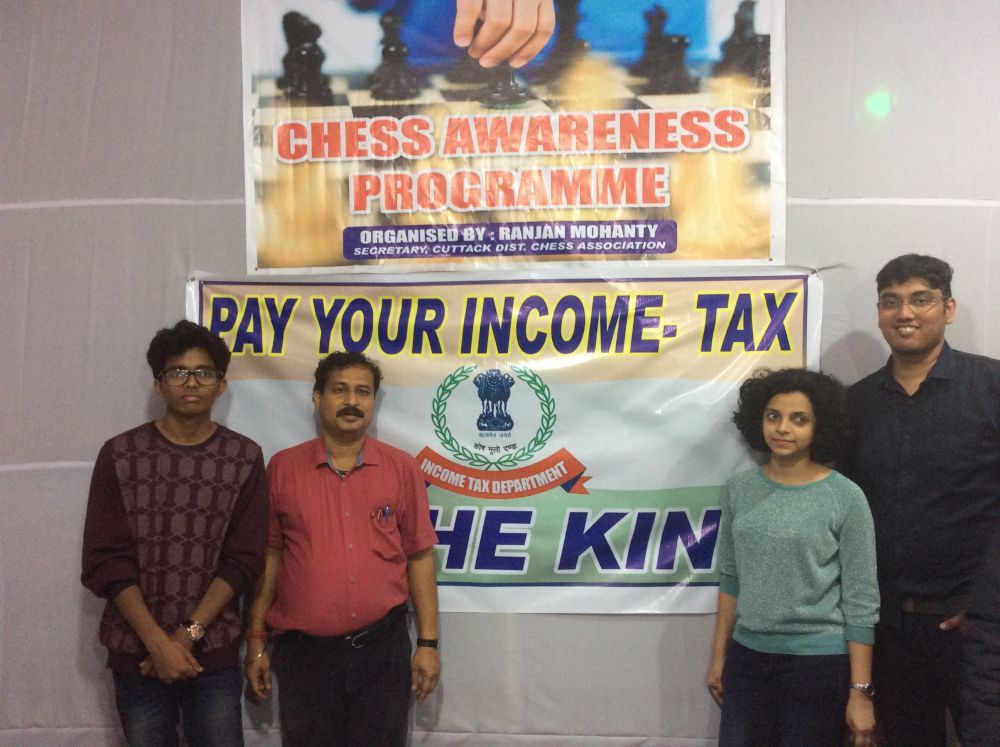 Pay your Income Tax - Be the King!

"Mine is a simple effort to popularise  the game particularly among the children who think chess as a tough clumsy game. I wanted to convince them that it's an interesting game that can be played by beginners too", said Mohanty who is also a national arbiter of the game and incumbent vice president of All Odisha Chess Association (AOCA). 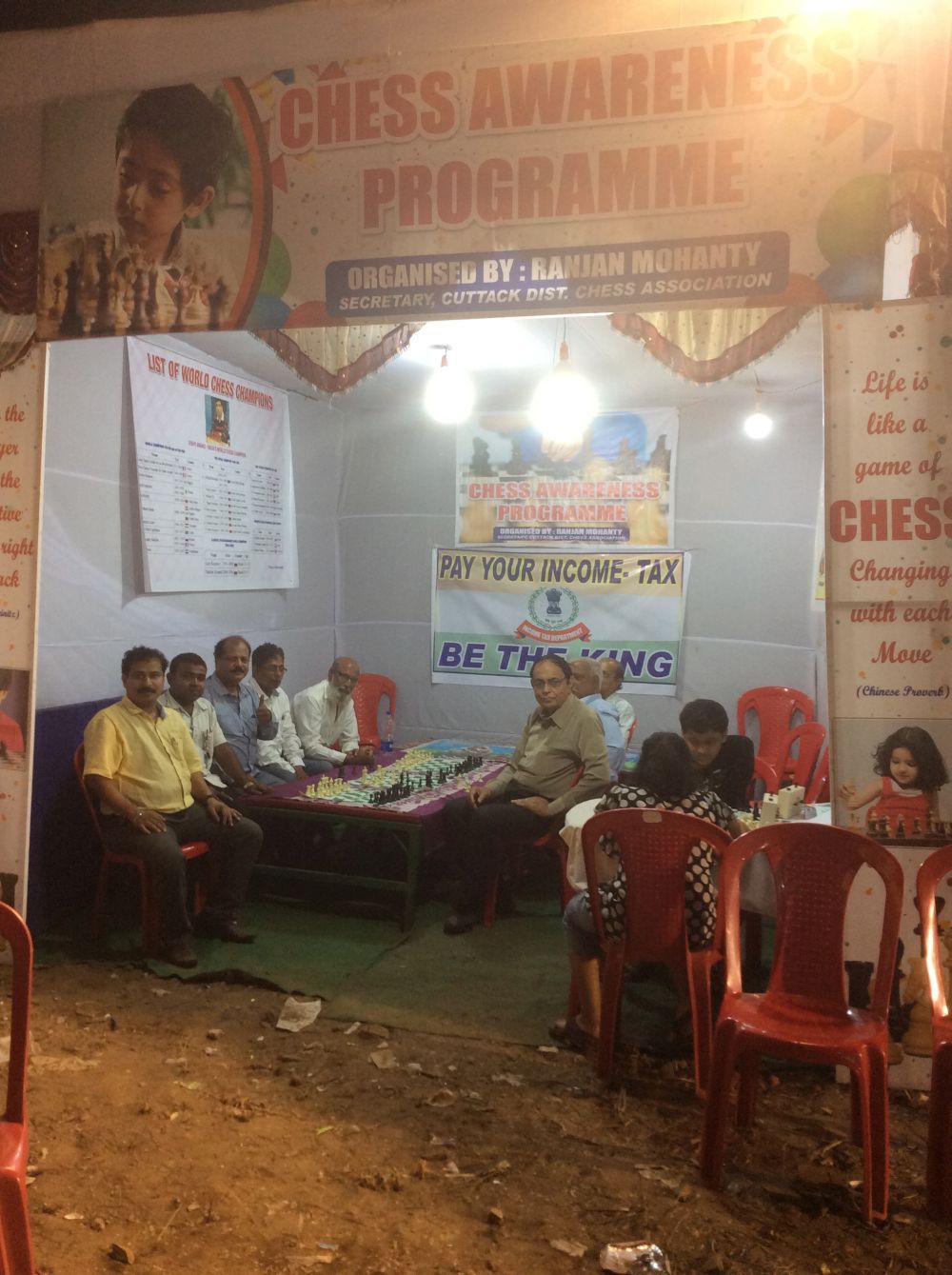 That's how the chess stall looked

A fine chess connoisseur from his childhood, Mohanty's heavily loaded work schedule as an Income Tax officer, has not deterred his interest or bonding with chess. "I just love the game and it keeps me going", he said with a tinge of emotion. 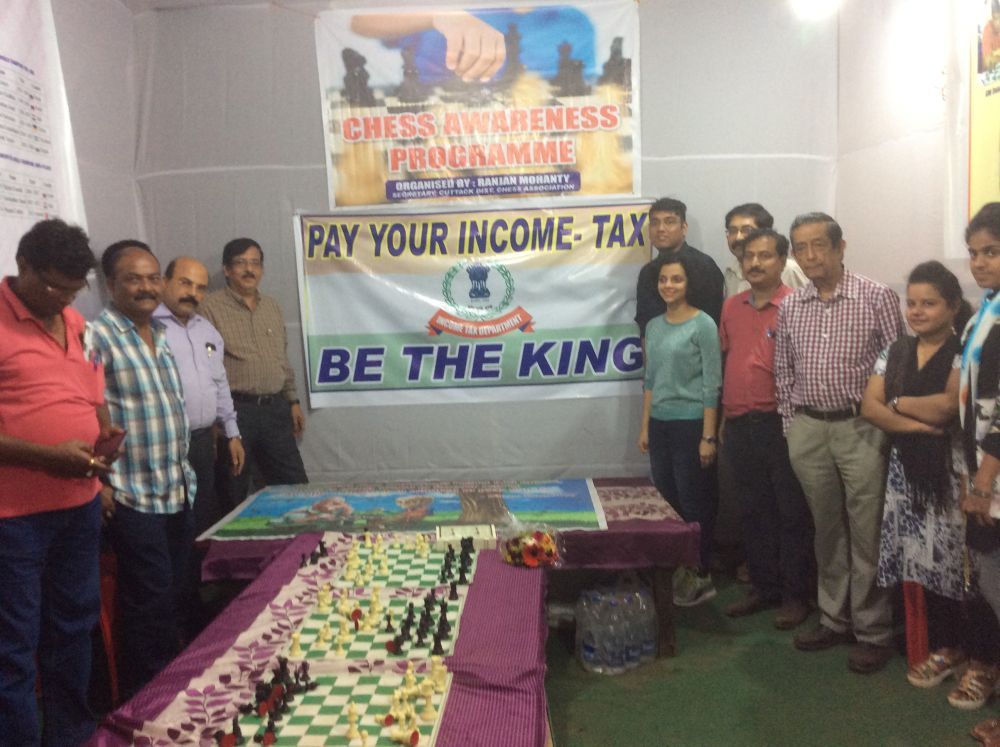 The income tax and chess fraternity come together! 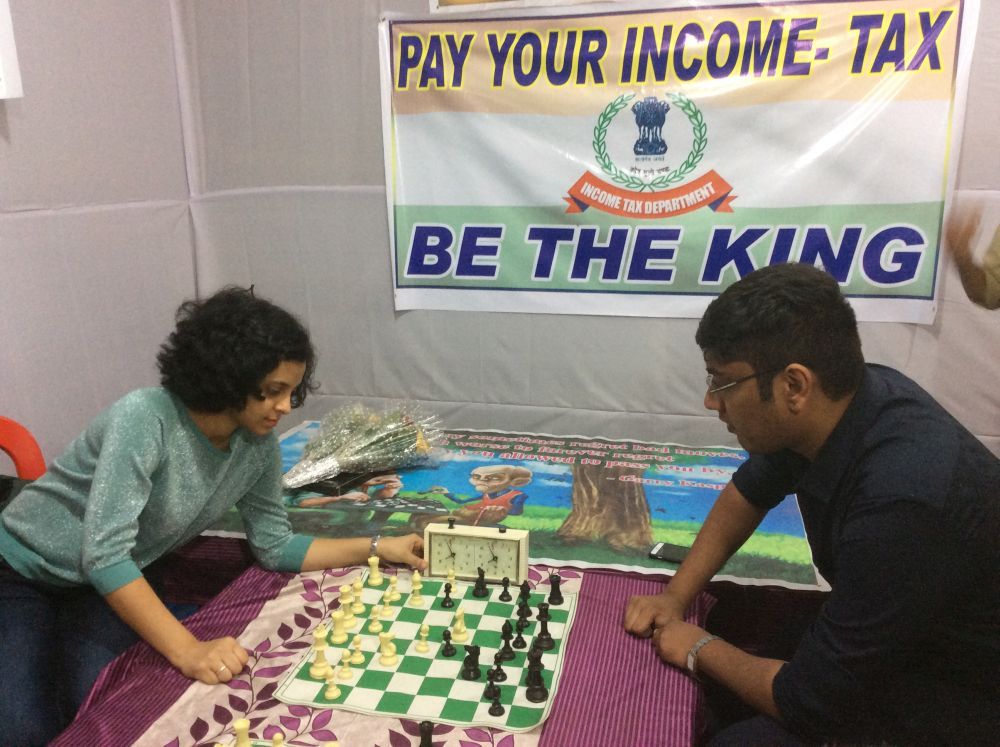 The stall was aimed at instilling curiousity and love for chess for the new comers, but Padmini and Swayams couldn't resist themselves!

About the Author: Pratap Mohanty is a Bhubaneswar based veteran journalist with over 30 years of experience in Print. He is also a popular Television commentator.