What happens behind the doors of the best training camp in India?

Getting selected in the national team and playing for the country at the chess Olympiad is a matter of pride for every chess player. But with it comes the great responsibility and pressure for performing well for your country. The Batumi Olympiad will be held in Batumi, Georgia from the 23rd of September to 5th of October 2018. Indian team will be represented by its strongest five female players - Humpy Koneru, Harika Dronavalli, Eesha Karavade, Tania Sachdev and Padmini Rout. The girls and their trainer Jacob Aagaard are taking the event very seriously as they worked meticulously in the pre-Olympiad preparation camp that was held in Hotel Leela Ambience, Delhi from the 3rd to the 9th of July 2018. Sagar Shah and Amruta Mokal visited the camp for a few hours and bring you their impressions.

After the Commonwealth Championships ended, I stayed back for one more day in Leela Ambience Hotel. The reason was very specific. The Indian women's team was having a training camp with coach GM Jacob Aagaard and I wanted to see how a camp of this stature works.

The camp was taking place in the conference room on the second floor of the hotel. Four of our best woman players Harika, Padmini, Tania and Eesha were training with the coach of the team GM Jacob Aagaard. On the second day of the camp, I decided to go and have a look as to how a national team prepares for an important event like the Olympiad. As I approached the room, it was all very quiet. I opened the door an saw a scene that was simply awe-inspiring. Jacob Aagaard sat on side of the room with his laptop attached to a television. The room had a huge square table in the centre with all the four players taking up their space on two sides. 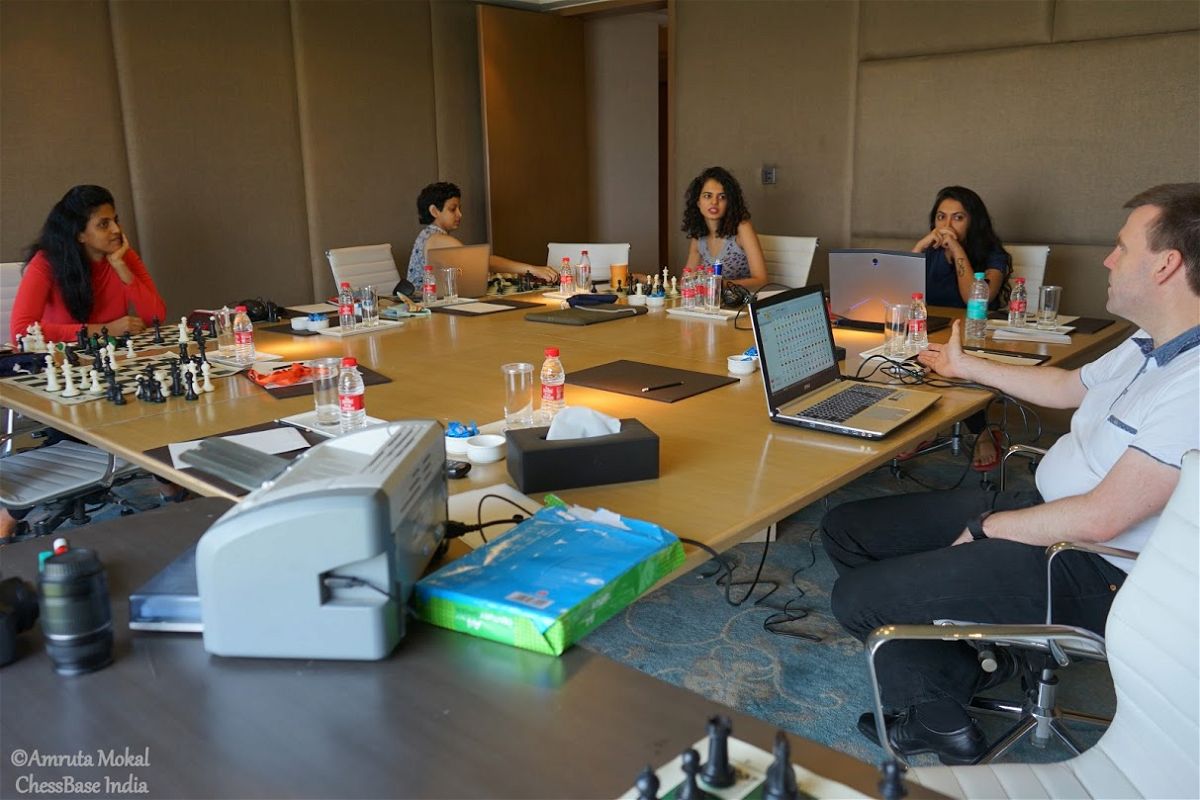 The setup in the Leela Hotel Conference Room for the Indian team that is gunning for the gold! | Photo: Amruta Mokal 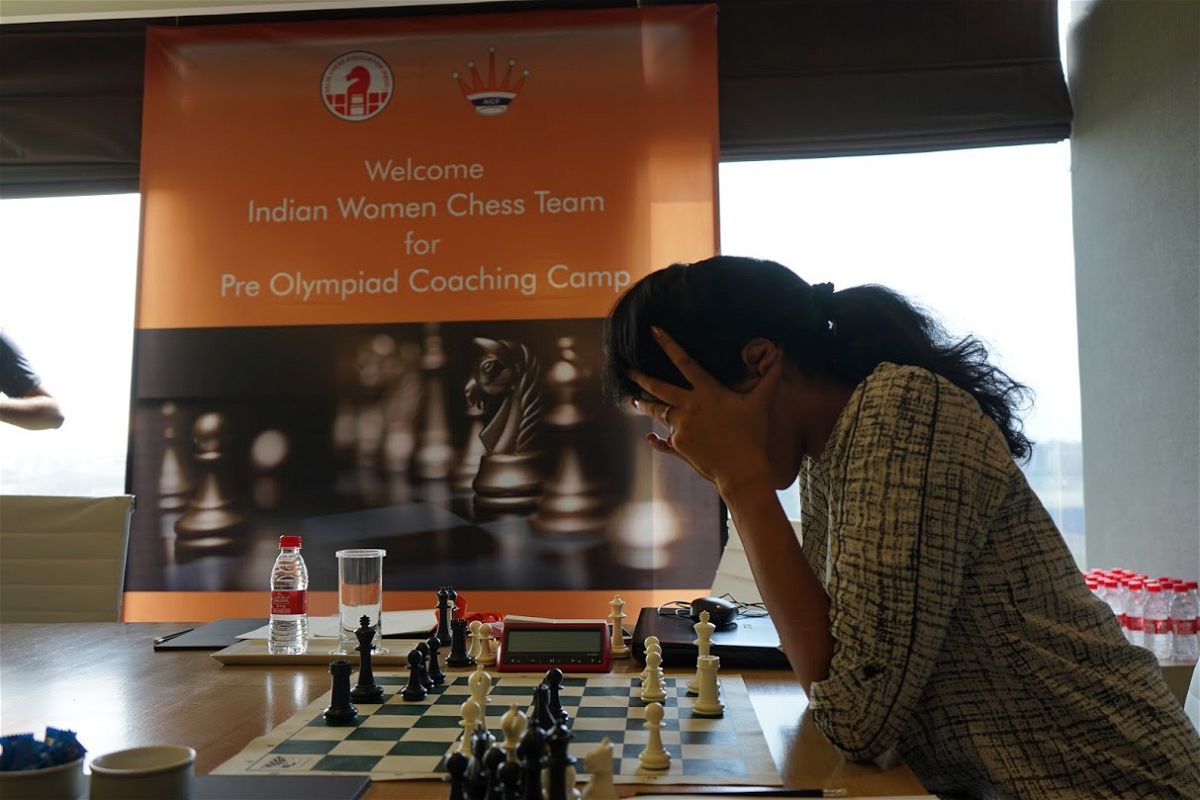 This was Harika when we entered the room | Photo: Amruta Mokal 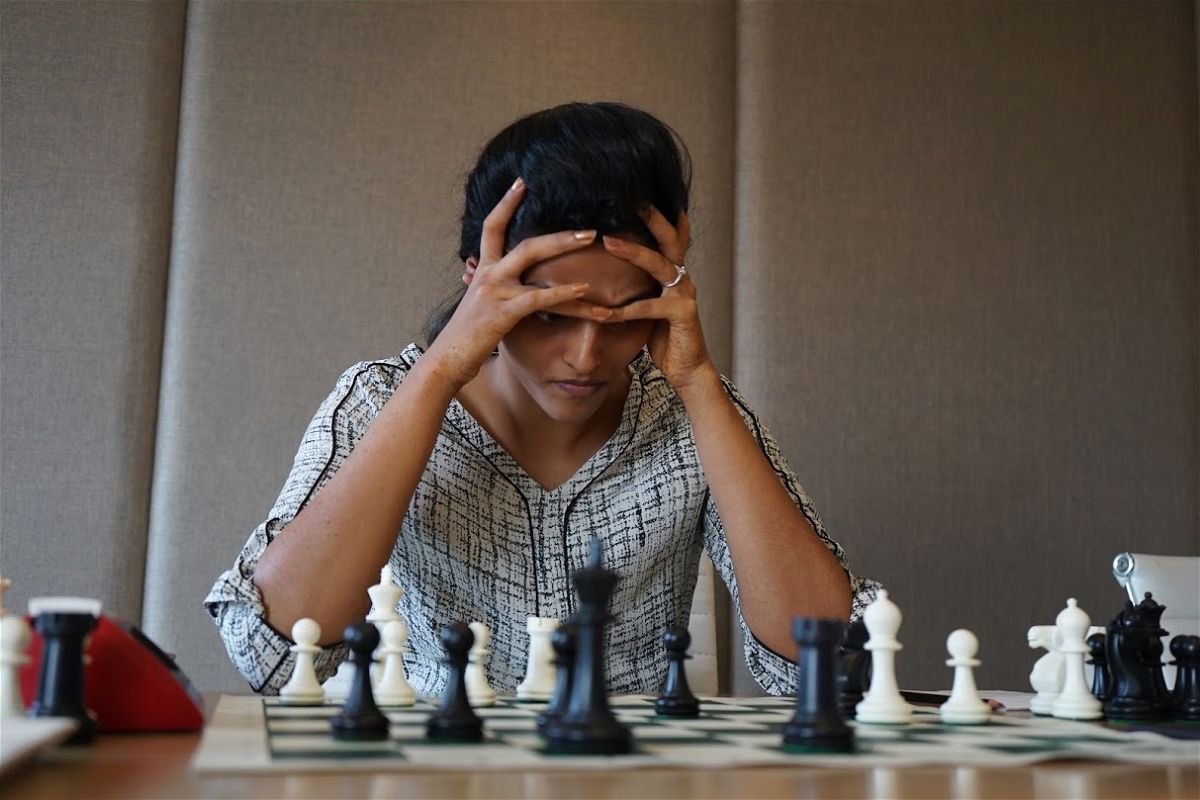 Absolutely nothing could break her focus | Photo: Amruta Mokal

For Harika, this camp was like what water is for a parched throat. She had been busy with her engagement and wedding preparations in the last month and was missing chess badly. The fact that she could sit in front of the board meant a lot to her. It was like meditation. It was like meeting an old friend! She was thoroughly enjoying herself and this was showing in her calculations. She was more often than not extremely accurate with her moves. 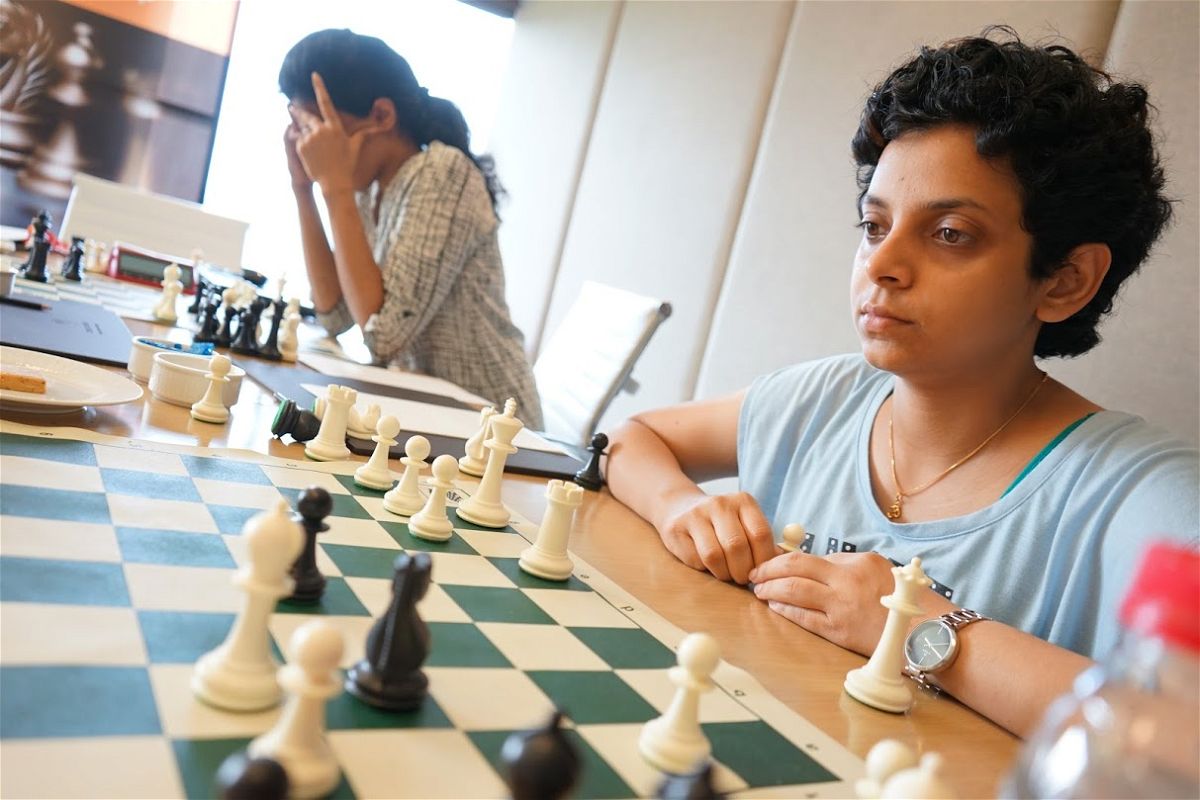 Padmini didn't put hands around her head like Harika but her concentration was also at the highest level! | Photo: Amruta Mokal

There is also something quite unique about Padmini. She makes chess look easy. She has all the traits that can make her a world class player. She is extremely motivated to work hard, she loves chess and at the same time, she absolutely fears no one! All of these things help her to be a fierce opponent in the world of chess. When you see Padmini playing a game, one hardly sees any change in emotions. It's difficult to guess from her facial expressions, whether she is winning or losing. This equanimity helps her to perform well in pressure situations. Team India would be hoping that Padmini can repeat the performance that she delivered back in the Tromso Olympiad 2014 | Photo: Amruta Mokal

The position that the team was thinking on when I entered the room was the following: 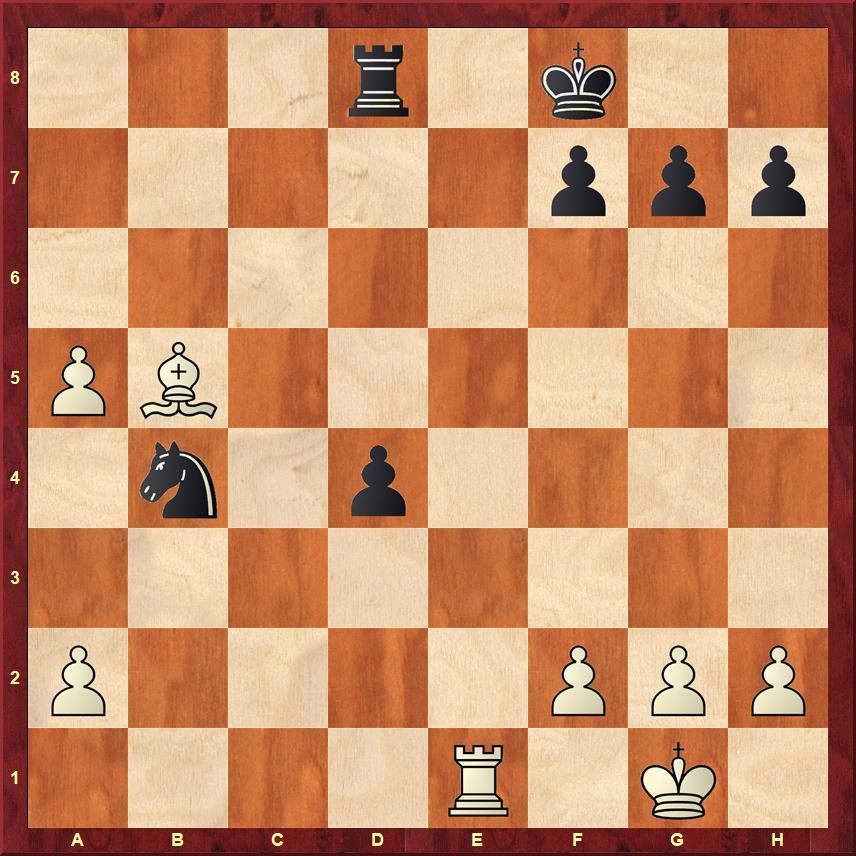 This is a typical Jacob Aagaard position. It doesn't seem much is happening in the game, but it is positions like these that keep coming in your game round after round. It is important that you get a feel of playing accurately in such simple positions. For many intermediate players, it would seem nothing is forcing here. Even if White were to play the move a3, the knight could go to many squares. But a deeper look reveals that things are extremely forcing in nature. Just that you need to put in effort to refute your opponent's moves. Check out the answer below, which the girls did manage to solve after some difficulty. 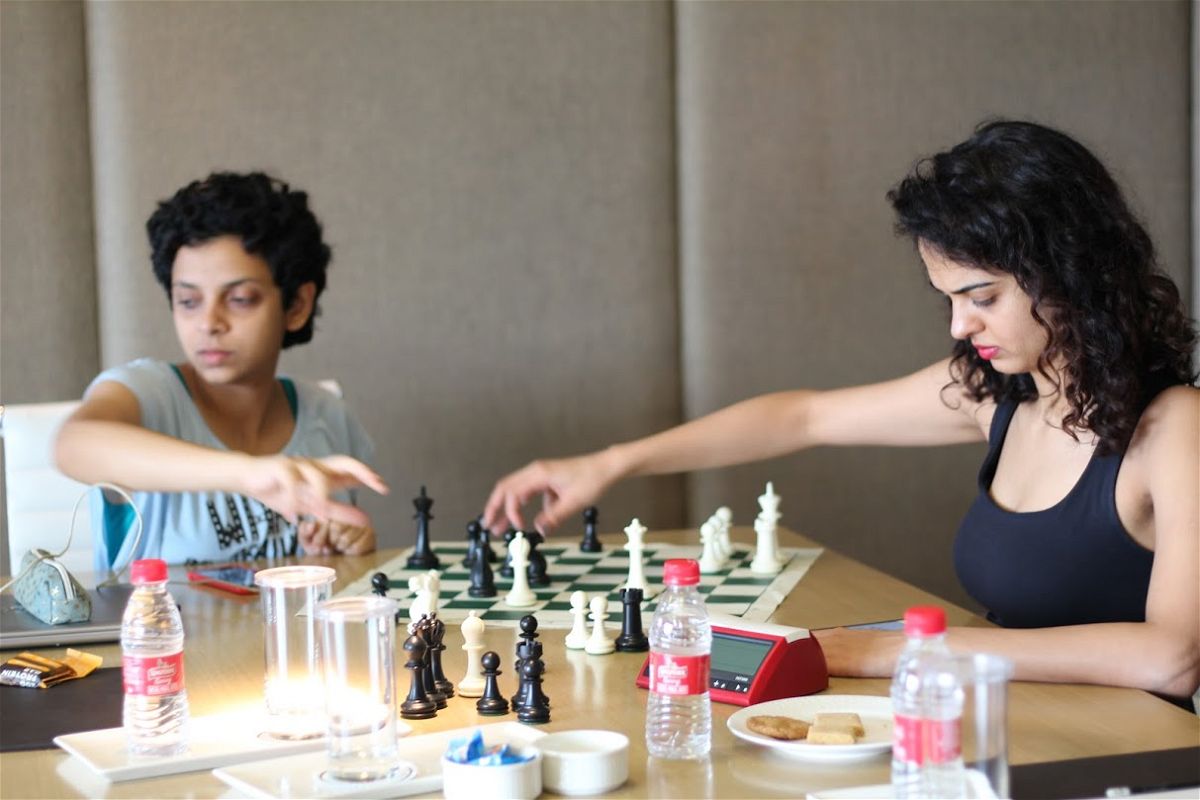 All engrossed in trying to solve the complexities of the position | Photo: Amruta Mokal 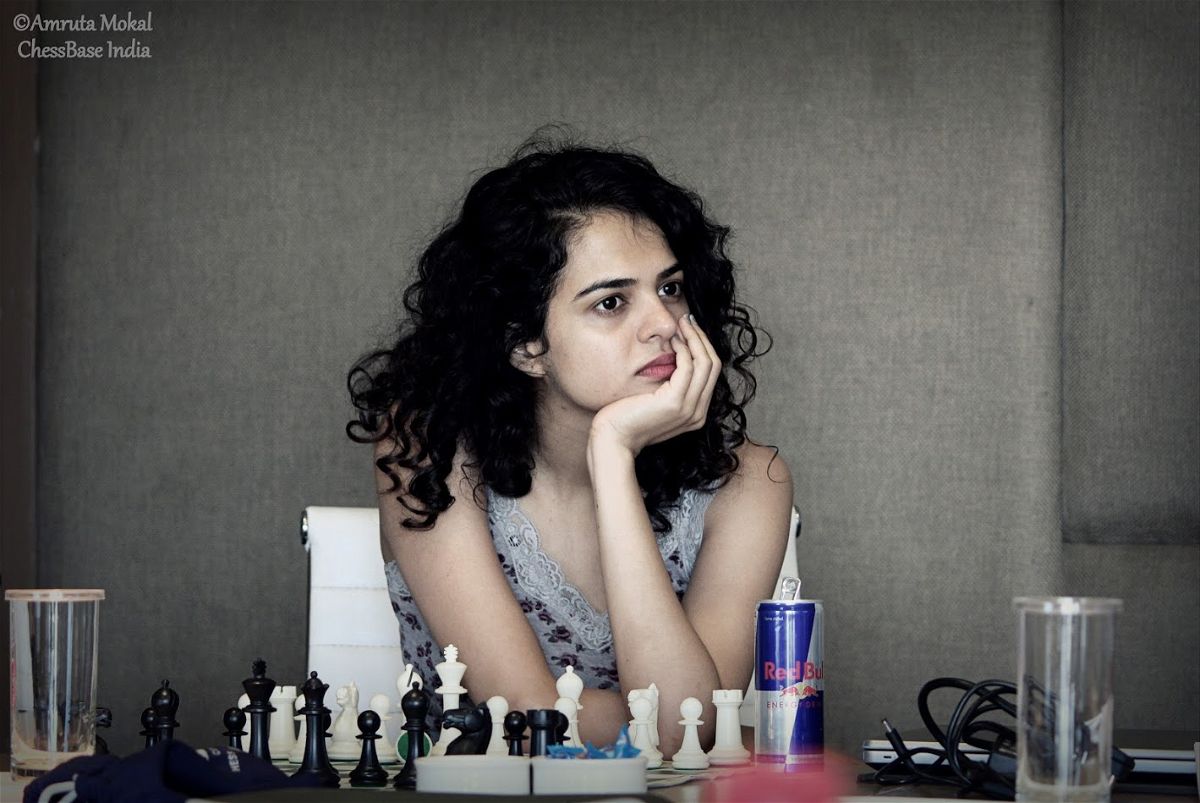 Tania Sachdev won the Commonwealth women's title on the 3rd of July 2018. And on the 4th, she was back on the job. That's the life of a serious chess player. They give as much importance to training as they do to playing in tournaments. 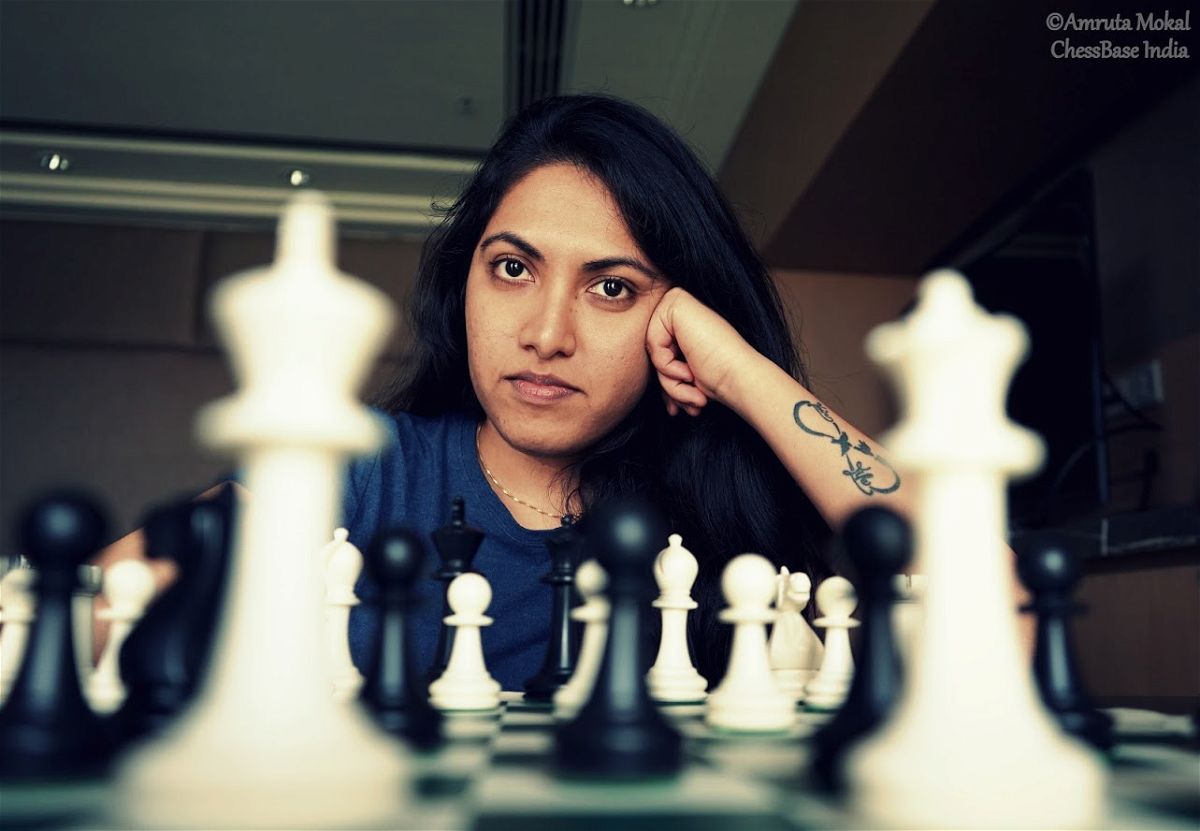 When the Aeroflot Open 2018 was in progress, I was in Chennai for a rapid tournament and sitting with a few of the GMs like Vishnu Prasanna, Deepan Chakkravarthy, Sriram Jha and others. The topic of discussion was Eesha Karavade and her games. She was playing some phenomenal chess and had beaten IM Amin Tabatabaei (2577) and GM Rinat Jumabayev (2614). Also she had drawn her games with very little difficulty against GM Wen Yang (2608) and GM Vidit Gujrathi (2723).When Eesha is in great form she plays like a GM. Eesha is also going through some major changes in her personal life like Harika. The Pune girl will be getting engaged on 18th of July 2018 to Kaustubh Joshi. All the Indian fans would be hoping that this alliance would bring great fortune to Eesha and that can bring herself in the best possible chess shape to Batumi. 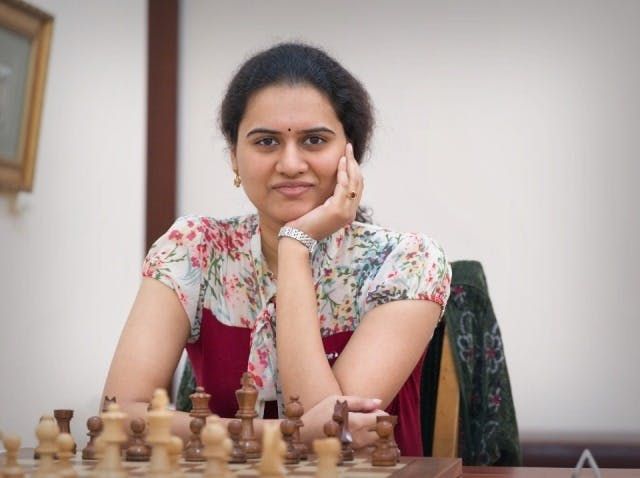 What an amazing news it was to see Humpy Koneru coming out from her break and ready to play for Team India at the Olympiad 2018. An entire article would not be enough to speak about Humpy's achievement, but one that I think aptly describes her abilities is - She became the second woman player in the history of the game to surpass the Elo barrier of 2600 after Judit Polgar. Humpy on board one will bring great stability to the team. It also means that other players will less stronger opponents as they will move one board lower. The only question is - how rusty would Humpy be. Her last classical event was the Chengdu FIDE Grand Prix in China in July 2016. That was two years ago. When Humpy would sit at the board, all the Indian fans would be excited to see if Humpy's style still remains the same as before or motherhood has made her look at the chess board differently!

The captain and the coach of the team is GM Jacob Aagaard. Jacob is well known as a world class writer, but even as a coach he has had some excellent results. He calls himself a semi-trainer of GM Boris Gelfand. Samuel Shankland has reached a rating of 2727 and is the current world number 27. A huge reason for this sudden rise is because of his work with Jacob. Aagaard believes in a simple philosophy - "Training works!" If you work hard in your training sessions, the chances of your success increase during the tournaments. He believes in the ability of the team and this belief has been transferred to the players. All of them are extremely happy with the fact that Aagaard is the trainer of the team and the mood of the team surely seems upbeat because of him. 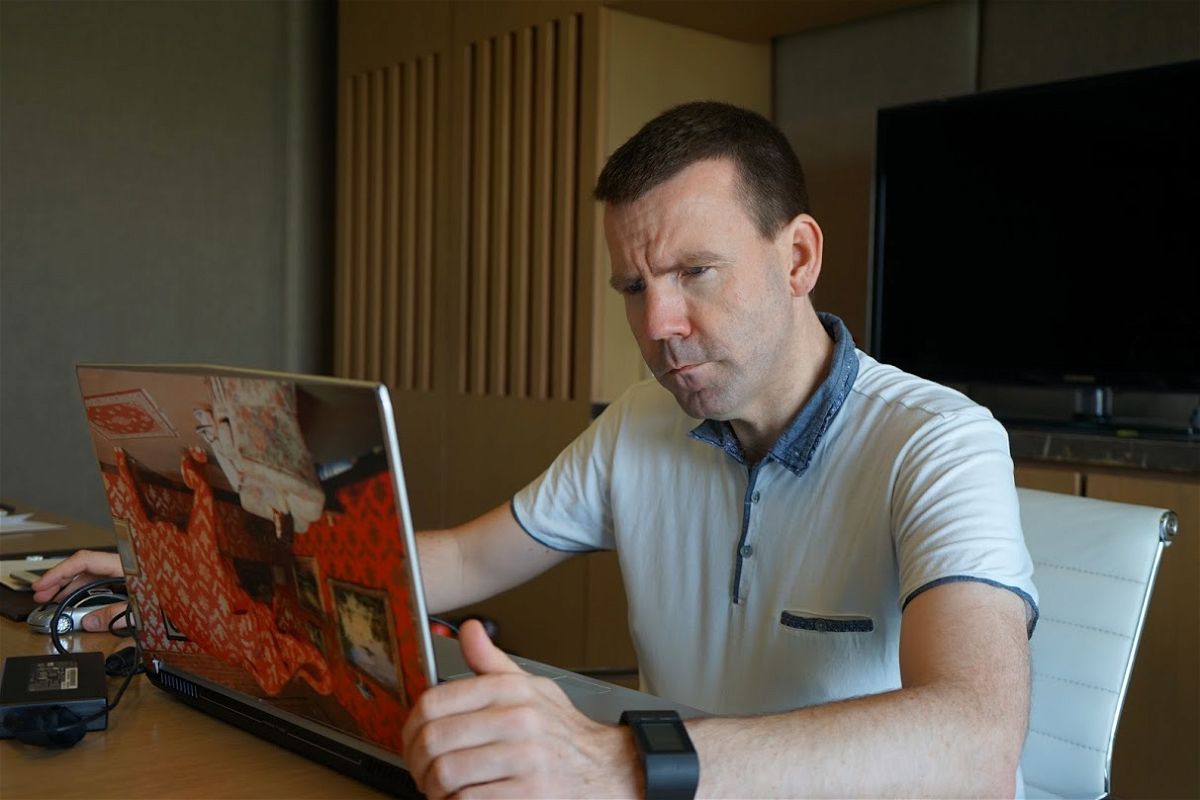 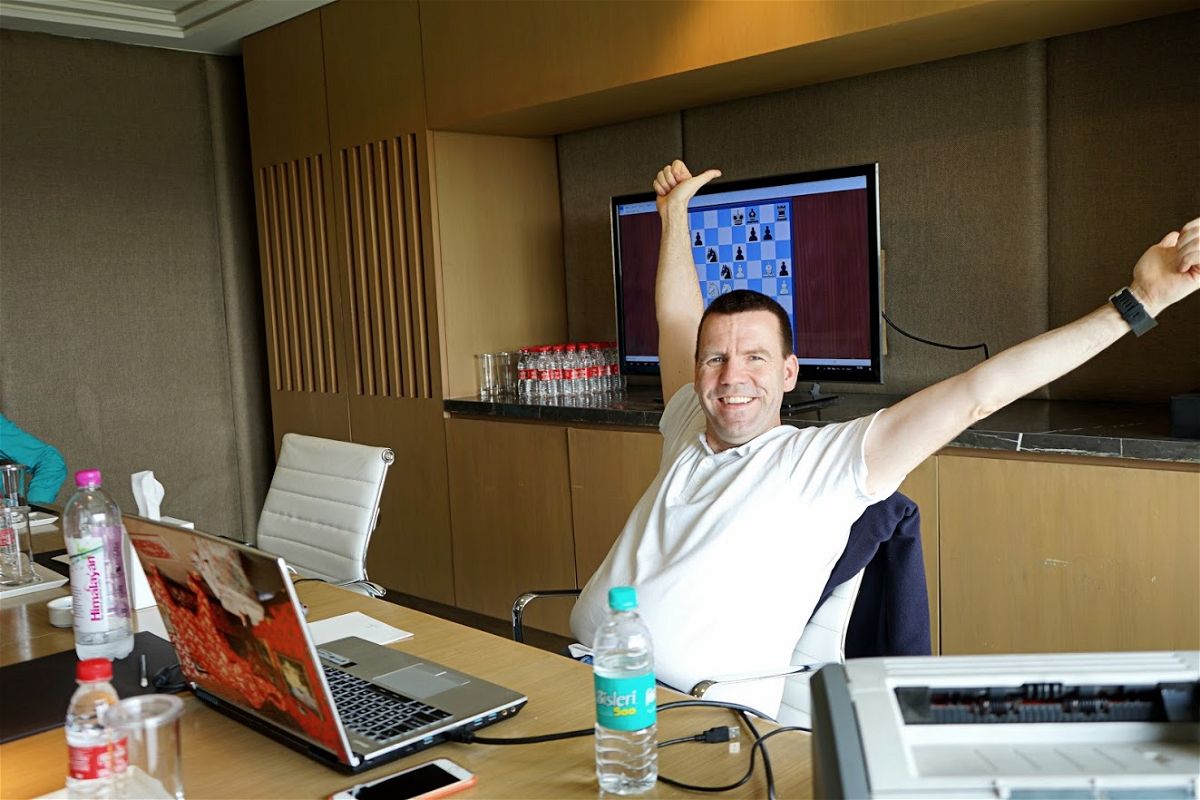 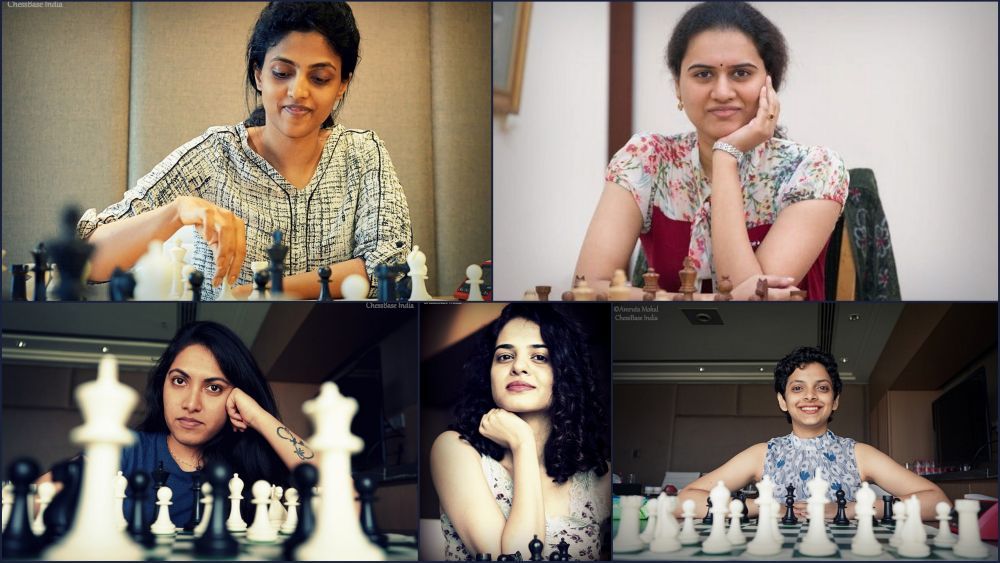 The current rating of Indian team:

The average of the top four players comes to 2458 and that would make us the 5th seed, just like last year. Instead of Soumya Swaminathan and Pratyusha Bodda, this year we have Humpy Koneru and Eesha Karavade. As always, China, Ukraine, Russia and Georgia will be the main teams that India will have to fight against. Hou Yifan and her team will be the favourites once again. The Muzychuk sisters make the Ukrainian team extremely strong, while Russia and Georgia have the experience of players like Kosteniuk, Dzagnidze, Lahno and others.

It was during the conversation with the tailor that I realized how important it is to have clothes that are comfortable for you while playing. There was some discussion whether the sleeves should be full or half. Finally they decided on three-fourth. It made sense that the sleeves would not come in the way when you are under time pressure and the pride of the country is at stake!

Nothing was done lightly. Even the task of choosing the clothes was taken very seriously by the team.

"We are ready to do everything for the players, we hope that team India will come back with a medal!" - AICF Secretary Bharat Singh Chauhan

The All India Chess Federation and its secretary Bharat Singh Chauhan are giving great priority to the Olympiad. Bharat Singh figures out that if team India wins a medal, it can boost the sport tremendously in the country. There have been multiple training camps for the players. GM Jacob Aagaard, who is well known for his training abilities, has been roped in and there are also talks that the team will have some secret helpers during the event. All the efforts have been pushed in the direction of the women's team winning their first team medal at the Olympiad 2018. Whether they will be successful or not will be only known on 5th of October, but the team, coach and the association are leaving no stone unturned in giving it their all.

We asked the same set of questions to the players of the team, coach Jacob Aagaard and AICF Secretary Bharat Singh Chauhan. The questions ranged from what their aim at the Olympiad is to who is the naughtiest player in the team. Check out this fun video:

Watch out! India is coming!