After scoring his second GM norm, a couple of months ago at the Heraklion Fischer Memorial GM Norm tournament in Greece, IM R Praggnanandhaa continued his quest for the GM title at the 1st Schaakweek Apeldoorn closed round robin in the Netherlands. Unfortunately, after five rounds, the Indian wunderkind has lost his chance to score a GM norm. Out of his five games, Praggna has lost four and won one. We take an in-depth look at his performance so far. | Photo: Henk Vinkes/Schaakweek Apeldoorn

The youngest International Master on the face of the planet, IM R Praggnanandhaa, has been trotting fervently around the globe to earn his required GM norms for the grandmaster title. Since he has already hit the 2500 rating threshold, all that remains between him and the coveted title is one grandmaster norm – he had earned his first one at the world junior championship, last year; and his second at the Heraklion Fischer Memorial GM Norm tournament in Greece, in April this year.

Currently, the 12-year-old is in the Netherlands, playing at the Schaakweek Apeldoorn closed round robin. The tournament is a 10 player event with a time control of 90 minutes for 40 moves, followed by an additional 30 minutes for the rest of the game with 30 seconds increment from move 1. The field includes some very strong players from the Netherlands and around the world. Some top names include GM Alexandr Fier, GM Tiger Hillarp Persson and the local star GM Ernst Spike. To achieve a GM norm, a player must score a minimum of six points out of his nine games.

Praggnanandhaa is seeded fourth by rating in the tournament but has had a tough outing so far in Apeldoorn. After five rounds of play, Praggnanandhaa has only managed to score one win. This means that the wunderkind has missed the opportunity to score his final norm. Even if he makes a sensational comeback winning all of his four remaining games, he will remain a point shy of the required score.

His only win came in round three against FM Max Warmerdam when the little genius pulled off a stylish miniature that lasted merely 26 moves. Praggnanandhaa had opened with 1.d4 but the game soon steered into the waters of the Pirc Defence after a transposition of moves. This was, perhaps, a welcome development for Praggnanandhaa who went on the offensive right from kick off. 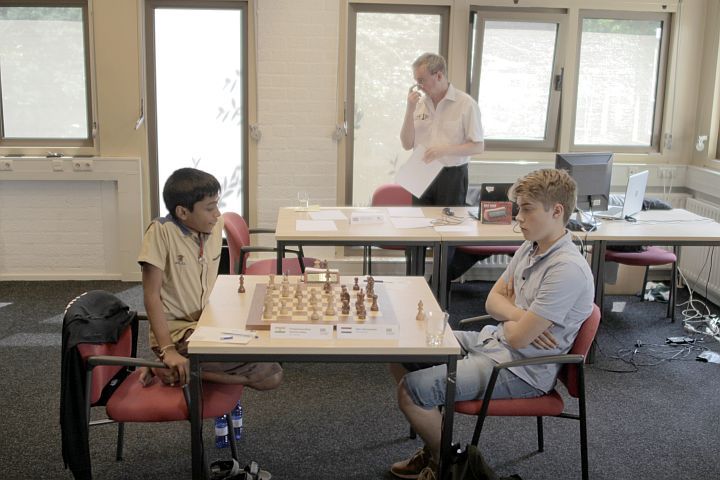 Storming his pawns up the board thematically, Praggnanandhaa generated a dangerous looking attack on the black king. Warmerdam tried creating instant counter chances with a wing attack of his own but blundered, in the heat of the battle, on his 16th turn. This gave Praggnanandhaa a decisive material advantage along with a continued attack. Warmerdam tried his luck at finding perpetual checks but after a few precise moves by Praggnanandhaa, it was lights out.

Praggna’s first-round game against the local GM Ernst Sipke was also a very interesting one. Praggnanandhaa had the white pieces in this game too and was successful in carving out a palpable edge in the middle game that arose from a King’s Indian Fianchetto. Trying to convert his positional edge into a material advantage, Praggna gave up his dark-squared bishop for Sipke’s knight, netting a pawn out of the transaction. But after the game, Praggna himself pointed out that this gave his opponent too much counterplay.

Also, within a few moves after this, the ticking clock began to make its presence felt and the Indian prodigy soon succumbed to the pressure. A string of bad moves starting with 38.Bxh3 caught Praggna’s king in an unavertable mating net by the time the first time control was reached. 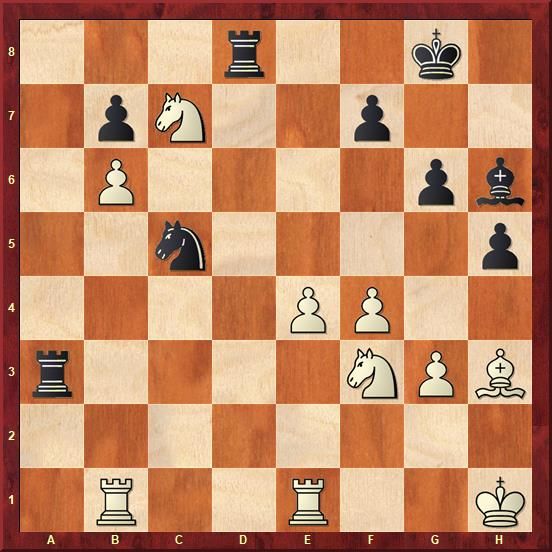 Position after 38.Bxh3
A short interview with Praggnanandhaa | Schaakweek Apeldoorn 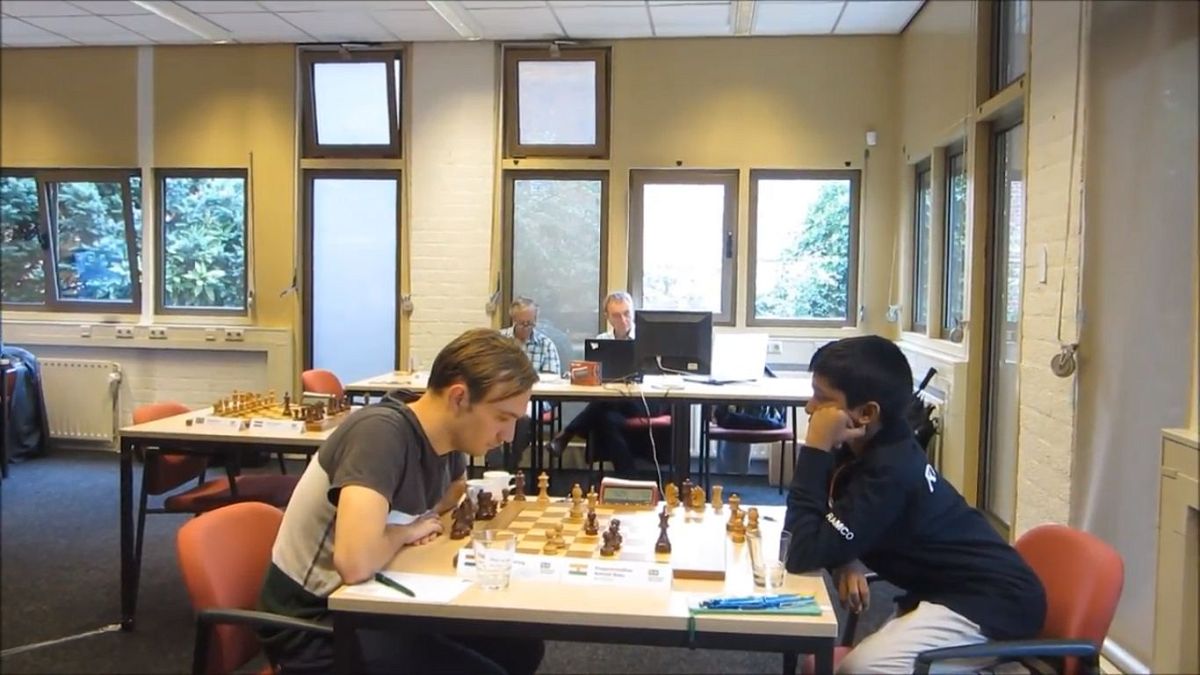 Praggnanandhaa played ambitiously in round 2 against Hugo Ten Hertog but this only backfired | Photo: Schaakweek Apeldoorn

After this loss, an ambitious attempt at bringing home the full point backfired terribly at the Chennai lad in round two, when he enterprisingly gave up an exchange to make something of his connected queenside passers. 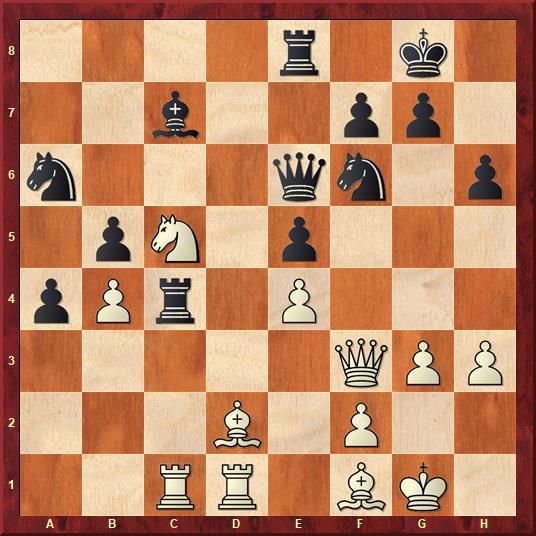 Pragganandhaa, with black, went for the enterprising 33...Rxc5 here, giving himself two queenside passers after 34.bxc5

But within just four moves, Ten Hertog was able to encircle these passers and hack them off before they could pose any threats. After this, Praggnanandhaa went down pretty fast. 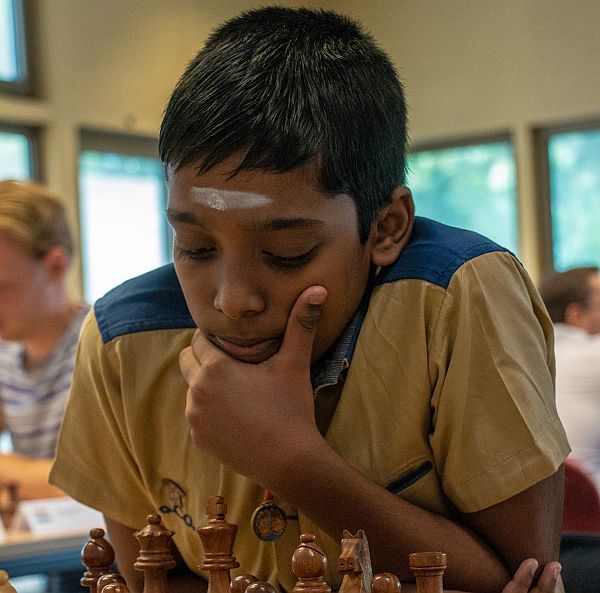 Something similar happened in the fourth round where, again, Praggnanandhaa, playing against IM Jose Rafael Gascon Del Nogal, placed his bets on his queenside passers. After a tumultuous first time control, the following position was reached. 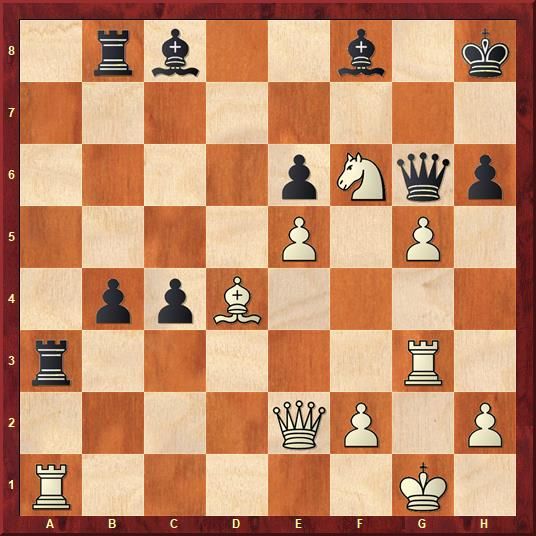 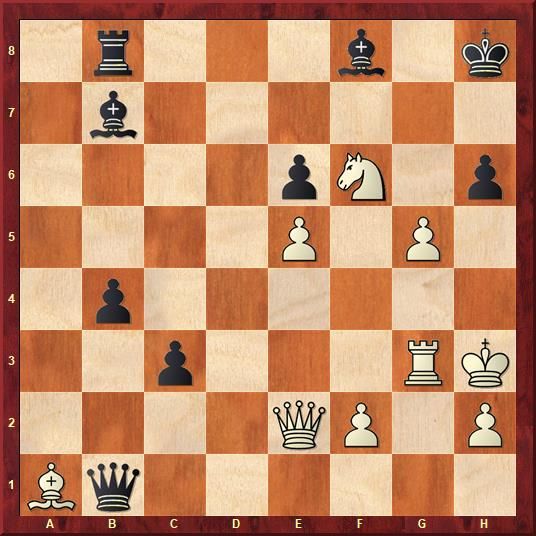 But Praggnanandhaa went for 41…Rxg3 and went on to lose after blundering four moves later.

Despite all setbacks, however, Praggnanandhaa has been fighting tooth and nail in every game. Unfortunately, one accident or another has lost him crucial points. In the fifth round, again, he had a decent position against the second seed of the tournament, GM Tiger Hillarp Persson. 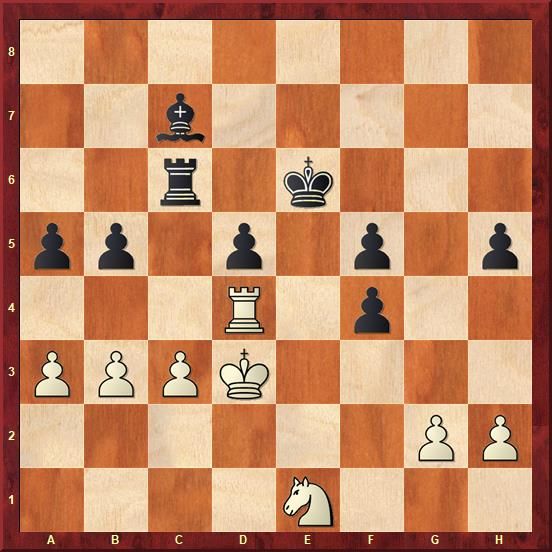 Black is threatening 41...Be5, winning the exchange. The computer thinks Praggnanandhaa should have saved the exchange with 41.Nf3. Instead, Praggnanandhaa played 41…Kd2, making room for the rook to retreat. But this gave the Swedish GM just a little bit to bite on, as he was able to punch in 44…d4 eventually and invade with his pieces. A couple of more inaccuracies by Praggnanandhaa in the remainder of the game only expedited the outcome. 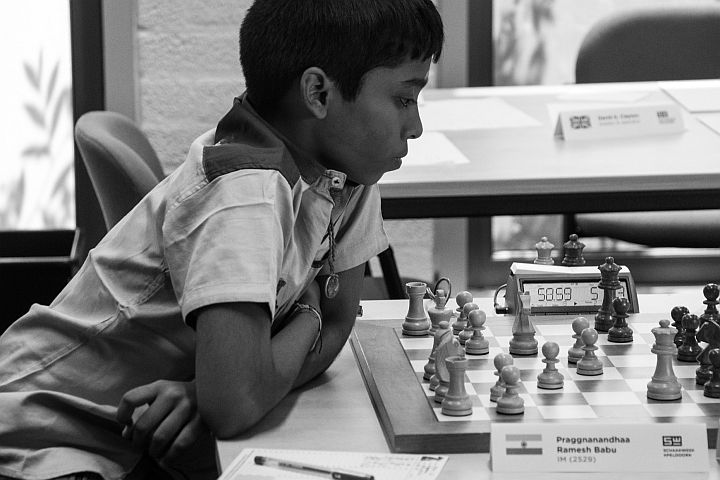 Round 5 was another unfortunate disaster | Photo: Henk Vinkes/Schaakweek Apeldoorn

After five rounds, Dutch IMs Thomas Beerdsen and Hugo Ten Hertog are leading the tournament with a score of 3.5/5. As for Praggnanandhaa, he is at the bottom of the table with only 1 point in his kitty out of his five games.

Four rounds still remain to be played. But having lost his chance to score a norm, all that remains for Praggnanandhaa is to improve his position on the leaderboard and finish the tournament with his head held high. 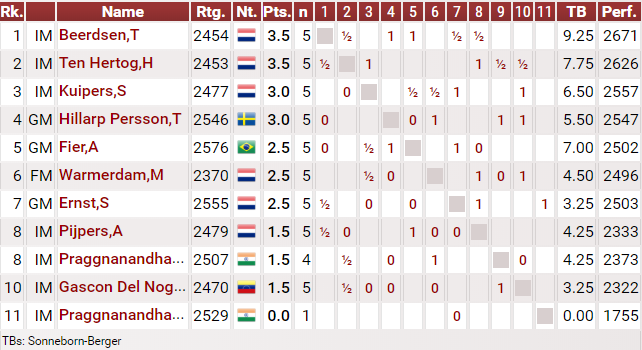